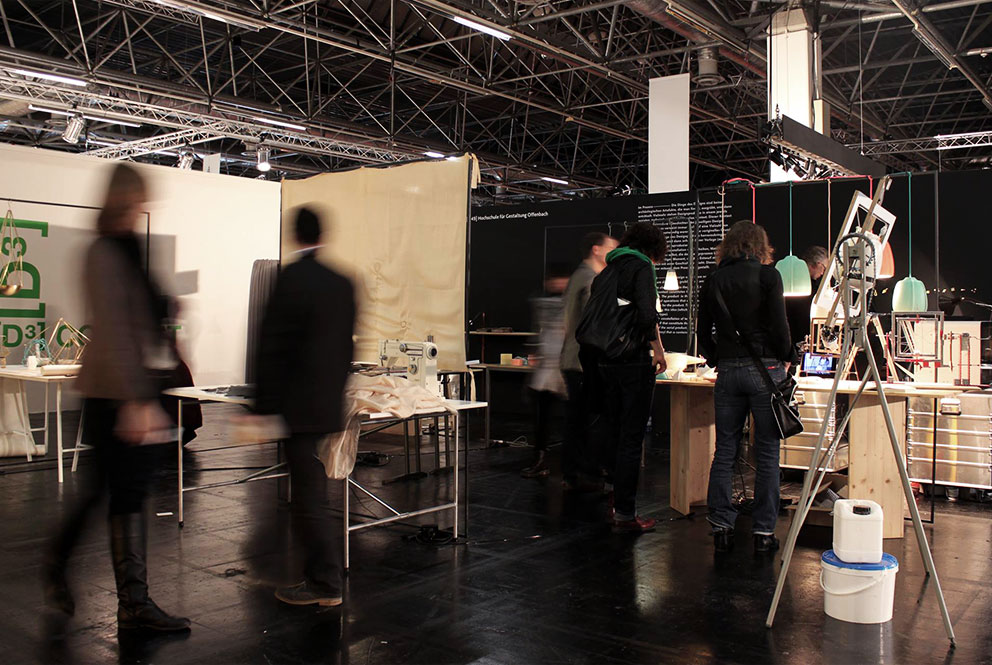 In hall 1 at the imm Cologne in the chaotic university stands it is clear: "We are working and experimenting!". Photo © hfg Offenbach

Overwhelmed by the wealth of new, but not very experimental items of furniture and ideas for interiors by the various manufacturers at imm Cologne in Hall 1 we headed for the platform for young designers, the “Pure One”, where the nominations for and winners of the [D³] Contest and various colleges showcase their projects and thus give an indication of the direction in which design may be moving in the future.
At first glance, having hoped for the experimental, the unusual, the refreshingly new, you may be forgiven for being disappointed: Your eyes will keep wandering as the booths resemble a warehouse, workstations abandoned during the creative process, chaotic and messy. At second glance, it soon becomes clear that there’s a concept behind it all: “We’re at work. Something’s happening here!”
Yes, we’re meant to feel things are incomplete, that it’s all about interaction. What counts is not just the final product, as the new-talent designers want to familiarize us with the creative process, visualize it for us.

In the midst of this collection of cheerfully experimental college booths the [D³] Contest section seems decidedly self-contained, orderly and well-kept. Preparatory models, sketches or processes are not to be found here. The competition for young designers curated each year by the German Design Council, nominated 20 projects by design students and young designers world-wide in 2014, and three of them won the prizes.

Orderly at the [D³] Contest

First prize went to Christoph Goechnahts for his beam for hanging hooks called “Ordnungshalber”. Goechnahts stated that he had reinterpreted the hook rack used by the Shakers, those American Puritans renowned for their simple designs. The Shakers made many inventions, such as clothes pegs and circular saws, any always in line with the principle that objects for everyday use should not boast frills to distract people from their work and reverence for God. Goechnahts’ beam is duly minimalist and, like its role model, runs round the room, thus creating an indoor horizon. Offering freedom of use and also encouraging people to go back to remembering the essentials. A subtle criticism of today’s overly affluent society?

Order is the key issue in the project that placed second, Yann Mathys’ “reverse”. His interactive system of room dividers not only divides the room into two but also conceals whatever is supposed to be hidden from view. The texture of the curtain made of Tyvek chips can be changed, and thus its translucency – simply by moving your hand across it. It’s the product of a critical focus on “paper”. There’s a flaw here – the choice of material. Tyvek feels like paper, but it is plastic. A room divider that does not have to bear much weight could easily have been made of paper and would have been sustainable, for example of recycled paper with a stable Kraftliner coat had been used.

Lena Schlumbohm certainly wasn’t thinking of the Shakers or of how to divide up rooms when she was inspired to make her “Jella” desk lamp, which won her 3rd Place in the [D³] Contest. “Jella” and the two other designs share a wish to enable users to interact with the objects. The luminaire thus consists not of a single rigid part, but has a steel base and a movable arm. Since the arm and the base are magnetic any manner of workstations or desktops can be illuminated exactly as desired.
The idea of adapting your furniture to your own personal and constantly changing living situation is evidently high up the priorities list for many of the young designers, as they probably often have to rely on lightweight furniture to contend with scarce living space and frequent moves.

That said, the nominations for the [D³] Contest also include astonishing things and equally notable ideas. For example, Ruben Becker asked how light a wooden structure could be and still function. The result is his “kleinergleich5” table, that weighs in at just 4.5 kgs including the stabilizing waffle structure under the top. The owner can easily carry it around singlehanded and use it in different rooms. Meaning not only is it flexible in function, but also eco-friendly, thanks to less wood being required given its lightweight structure.

Tsuyoshi Hayashi also focuses on sparing natural resources in his designs: His “Kawara Bench” consists of reject Japanese roof tiles that he acquires free of charge as waste from the factories. He makes the right wooden frames for the tiles, places the latter on the top, and Hey presto you have a bench or bar stool. The young Japanese designer emphasizes upcycling in his work: Why make new seats if Asian roof coverings with their ergonomic shape fit the bill? Sadly, he didn’t win the [D³] Contest, but he certainly breathed new life into roof tiles in the Land of the Rising Sun and impressed us with his idea of reusing things.

Back to the colleges, where the motto evidently is “the path is the goal”. At the “Hochschule der bildenden Künste Saar” booth things are buzzing – or rather an elaborate 3D printer is layering soft porcelain mass in strips. The result is a hodgepodge of small, indefinite porcelain pieces that are astonishingly varied in shape. The students from HbK Saar purpose-built the 3D printer to be able to print not just fabrics but porcelain, too. The machine is not yet perfected, though, and requires constant re-engineering, which is exactly what the students find so interesting. To them, design auxiliaries such as tools, machines and computer programs are as important as the product. Faulty prints generate unusual shapes and textures that can inspire new manufacturing processes and ideas. Another interesting approach is thus: Why reject models that haven’t worked out and instead see what potential they offer?

Why not print the pasta in 3D?

The first-year students at the Offenbach University of Art and Design set great store in the production process. And one of their examples is far tastier than porcelain: pasta dough. Can the beautiful likewise be tasty? This was one of the issues the designers explore, and they set themselves high standards, The pasta had to be more beautiful than customary products and be easy to produce. But, and this was a real challenge, the final result had to float in soup. Because beautiful soup add-ins need not be hidden. The result was a variety of dough folding techniques – noodles shaped like blossoms that float in the soup like lilies and don’t settle to the bottom of the bowl. And the young Offenbach designers likewise asked: “Why not print the pasta in 3D?” What sounded so extraordinary will soon be a reality or so we found out in conversation with them. Italian food giant “Barilla” is currently working with Holland’s “TNO” institute to make a 3D pasta printer. But instead of waiting for it, the students preferred hands-on tools to prepare the dough. And what they rolled out looks great, and tastes great. A small invention, perhaps trivial at first sight, but simply nice and close to real life.

To summarize in conclusion: The young designers try to spare resources and nature, have a feel for the challenges of everyday live, seek to fin aesthetically contemporary forms, and are happy to welcome new manufacturing techniques. Meaning that the emphasis is not simply on making another chic piece of furniture, but also on shouldering responsibility for one’s fellow human beings and the environment. And that mindset at least did overwhelm us in Hall 1 at the imm cologne.

Warning - Furniture subject to mood swings: The young generation of designers at SaloneSatellite 2013 turned out to be both fresh and experimental in their approach..
(06 May 2013) 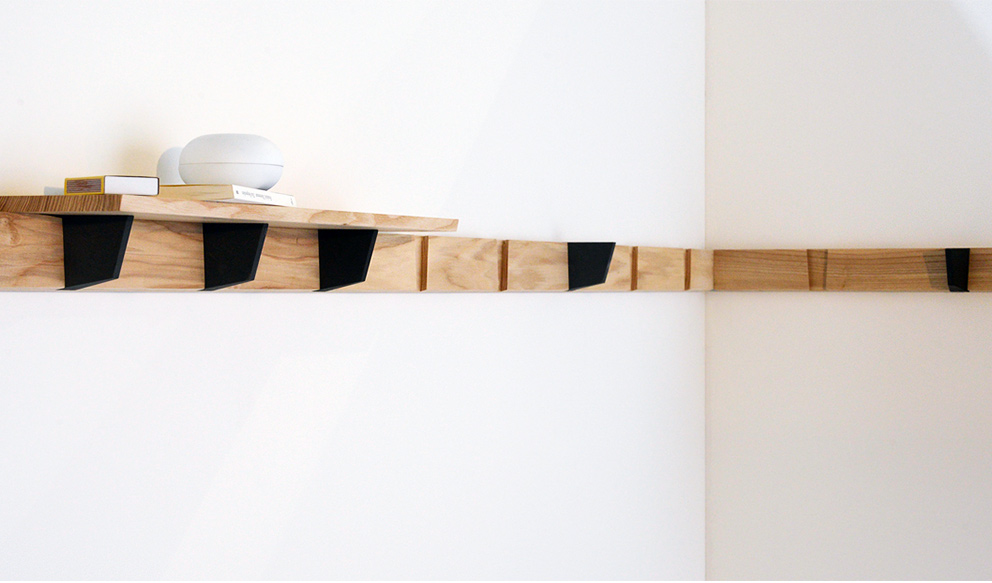 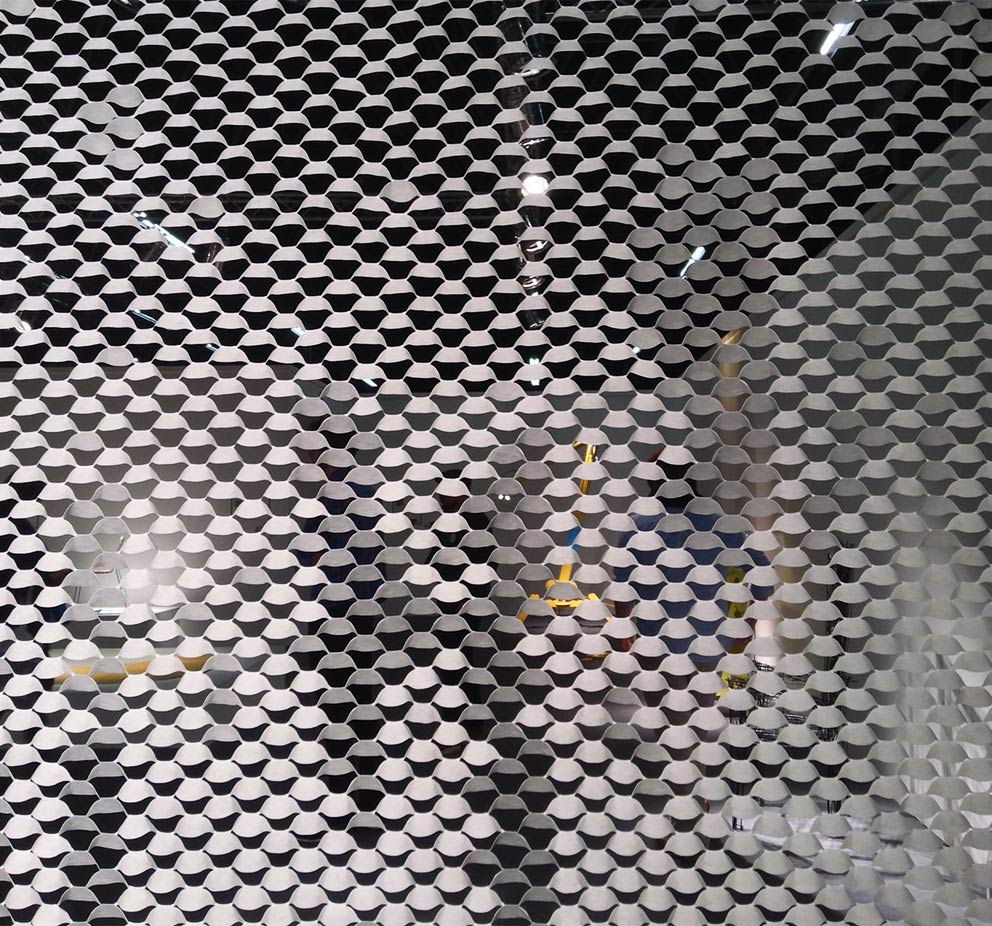 The runner-up project "reverso" by Yann Mathys is an interactive partition system, whose shed structure changes by driving with the hand over it. Photo © Martina Metzner, Stylepark 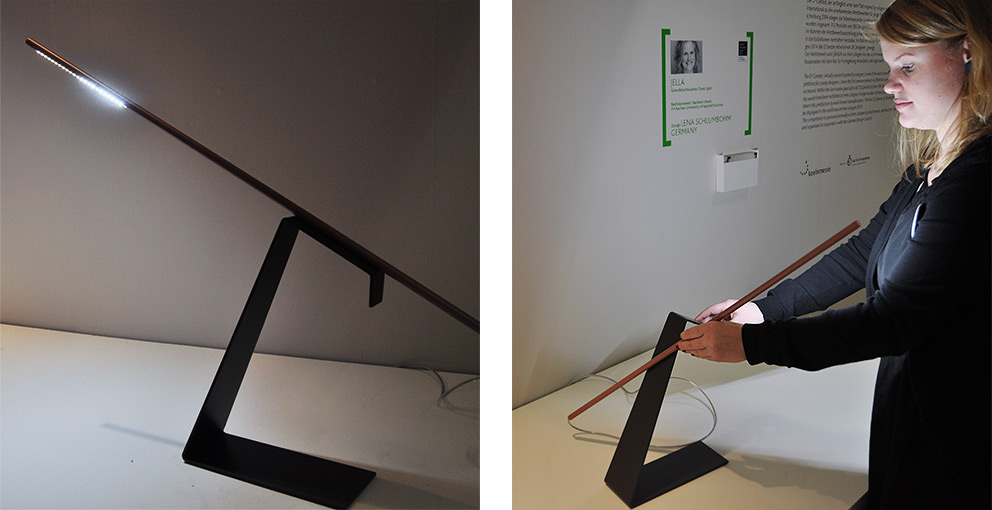 Lena Schlumbohm won the third price of the [D ³] contest, with her desk lamp "Jella" which consists of a steel base and a movable Leuchtarm. Photos © Leyla Basaran & Martina Metzner, Stylepark 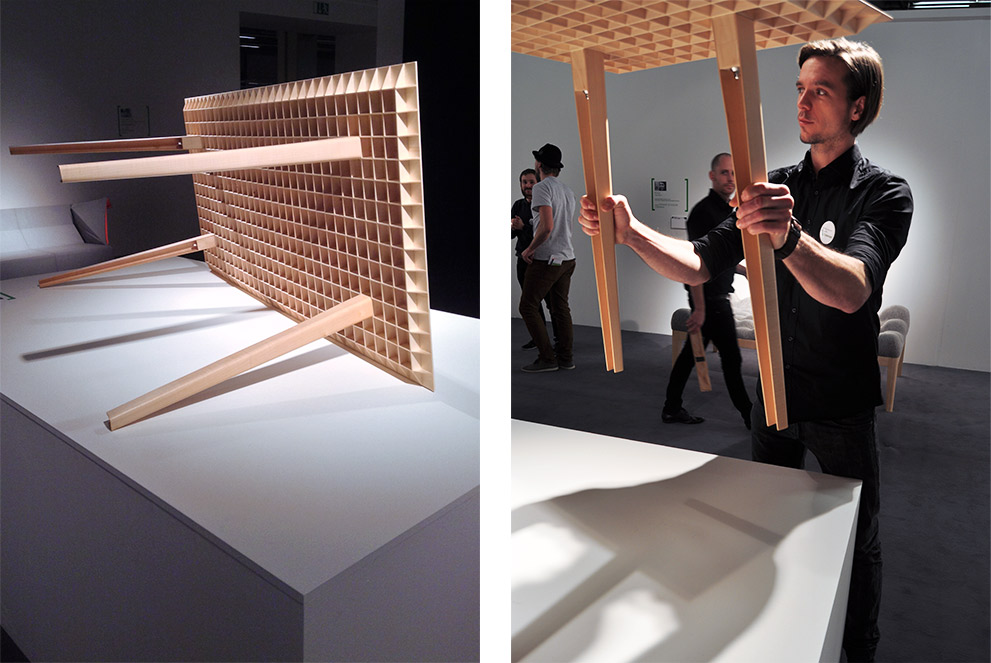 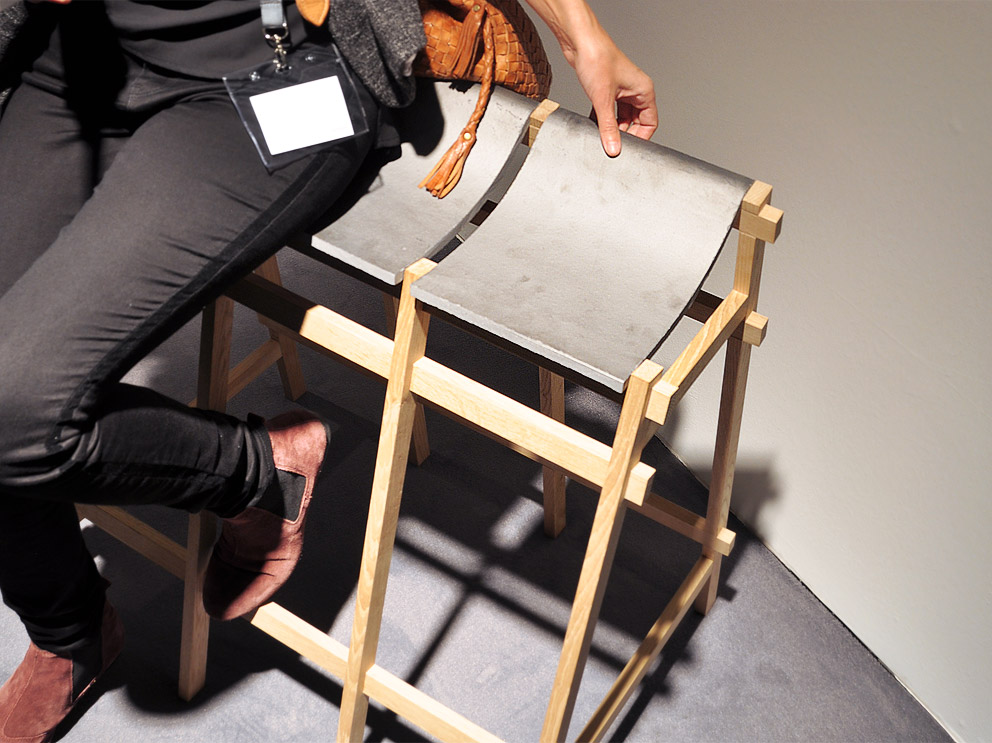 Tsuyoshi Hayashi's "Kawara Bench" consists of a wooden frame and discarded Japanese roof tiles, which he obtained free of charge as a waste product from factories. Photo © Martina Metzner, Stylepark 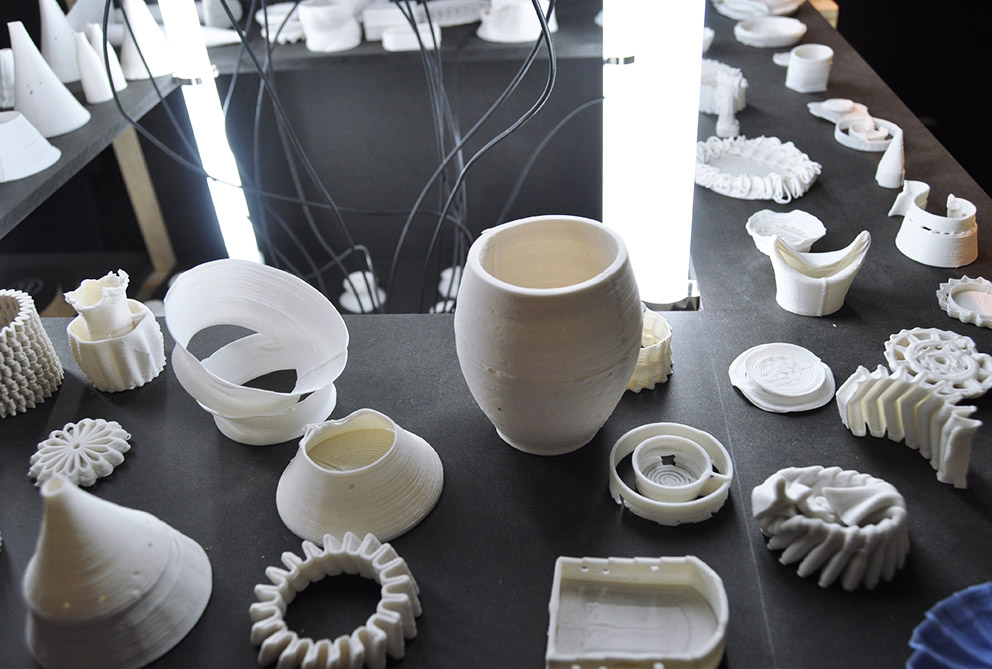 The 3D printed objects are presented in a hodgepodge of small, nondescript porcelain pieces, which inspire the students to create new designs. Photo © Martina Metzner, Stylepark 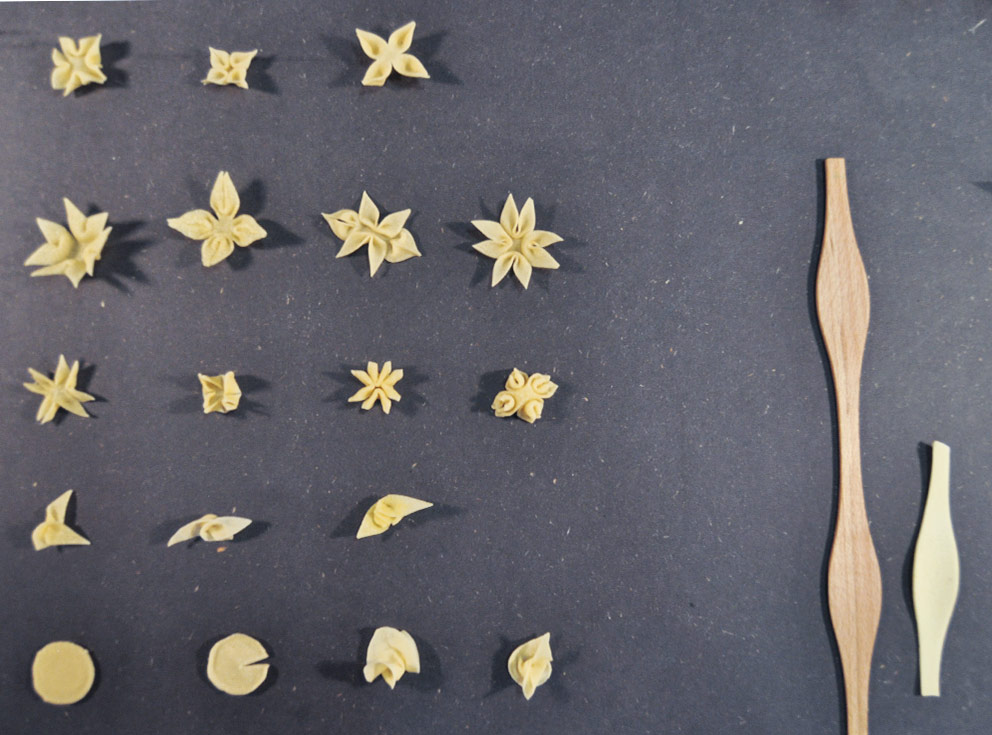 The students from the "Hochschule für Gestaltung Offenbach" designed various noodles in flower shapes that can float on a soup like water lilies. Photo © Martina Metzner, Stylepark 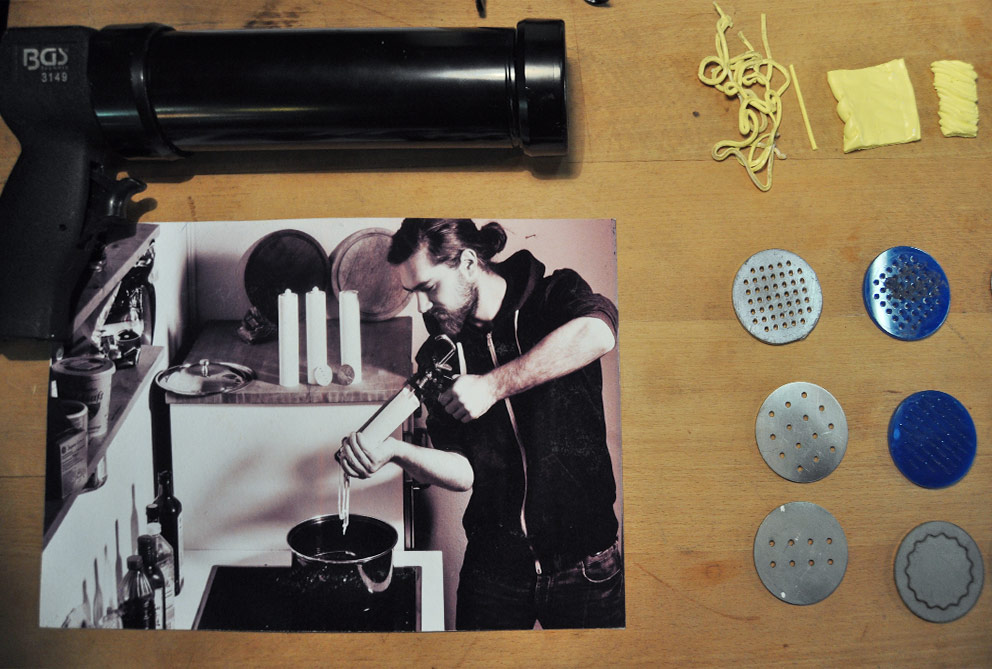 For the young designers it was important to produce their noodle designs with manually operated tools. Photo © Martina Metzner, Stylepark 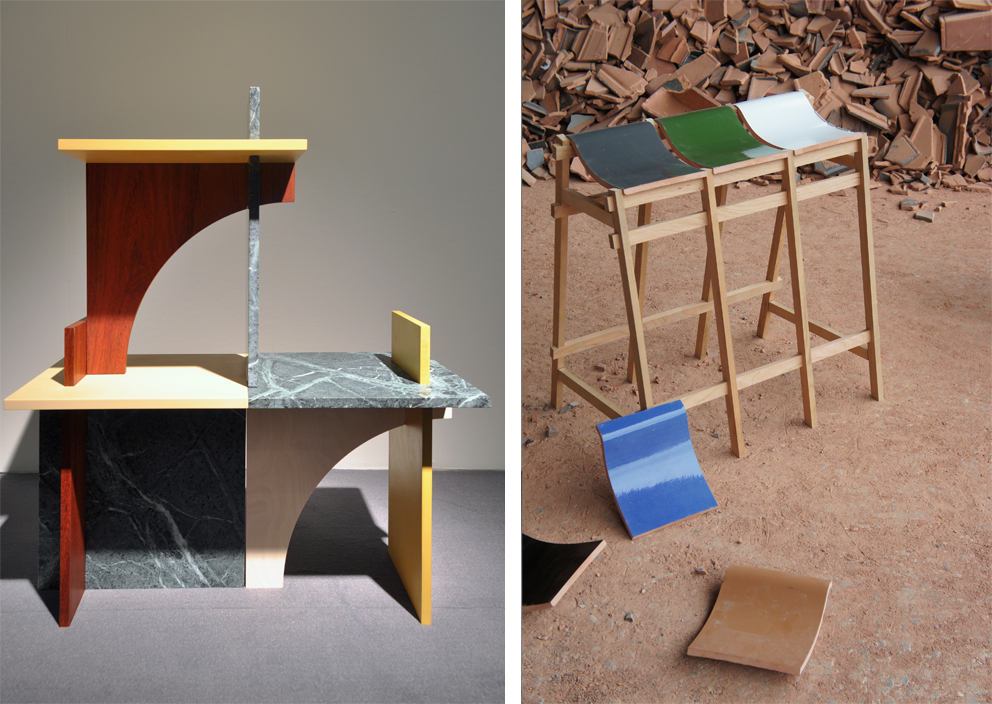 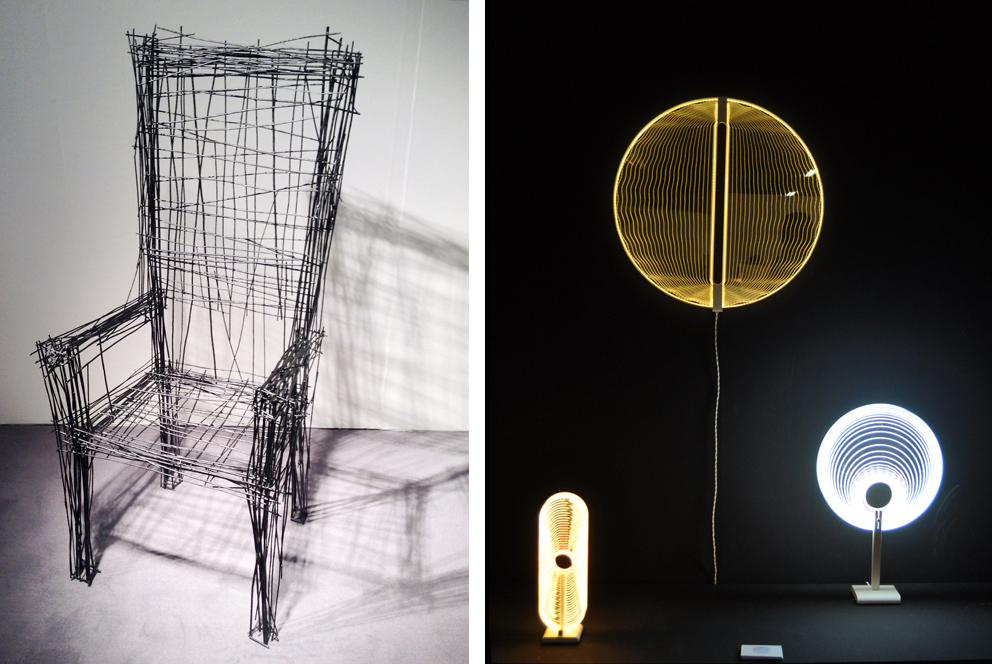 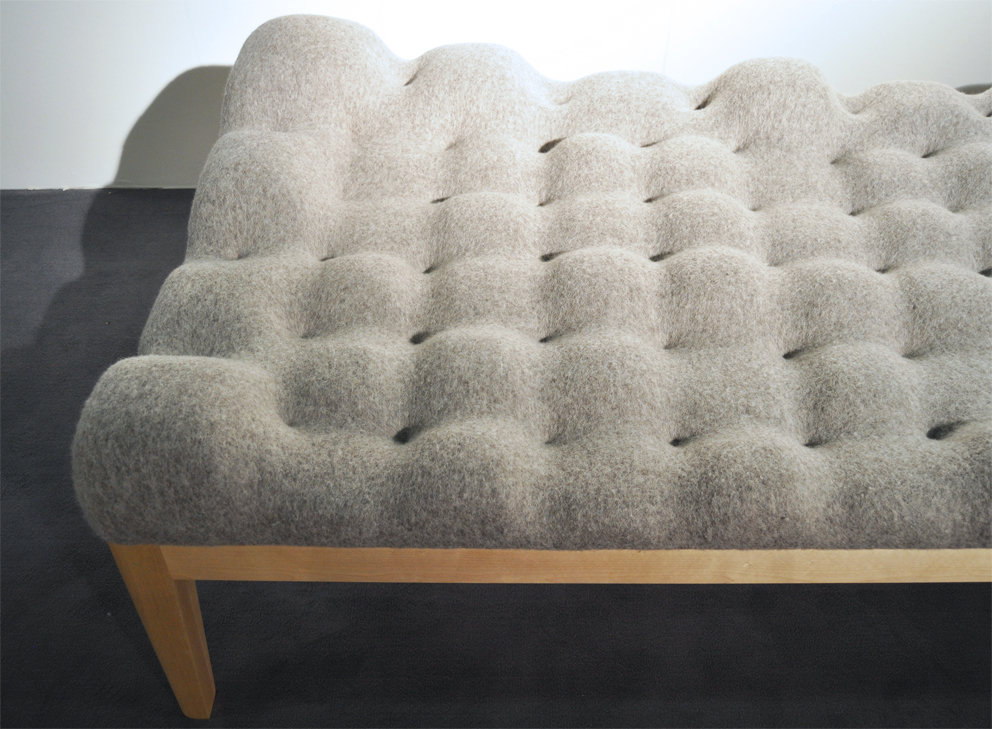