Westminster University's Archigram Archival Project in London proves that archives do not always have to be hidden away in dark cellars, dusty and hard to access. If you would like to gain an idea of the designs and activities of the avant-garde urban planners who became famous under the name "Archigram" then head for the Internet. As of recently there are some 10,000 documents available to anyone who wishes to view, study and analyze them. The successful compilation of so many drawings, plans, films and texts is certainly impressive if you bear in mind that hitherto all this material was scattered across numerous different people and institutions and has never been made as extensively accessible before, be it in a publication or an exhibition. No less worthy of mention is the way in which the Archigram Archival Project presents all the documents, and how the homepage offers a clearly structured framework for the wealth of material presented there and guides the visitor through Archigram's entire oeuvre almost like in an exhibition.

Under the name "Archigram", formed from "ARCHItecture" and "TeleGRAM", from 1961-1974 a group of British architects got together and developed their ideas for transforming the city. The six members were Warren Chalk, Peter Cook, Dennis Crompton, David Greene, Ron Herron and Michael Webb. They published their concepts, often described as "utopian", in the nine (and a half) issues of the magazine "Archigram". High-points included, for example, the "Plug-In-City" that Peter Cook designed in 1964 and the "Walking City" designed by Ron Herron and Bryan Harvey the same year. In 1972, Archigram took part in the documenta 5 in Kassel - in the form of its "The Orchard Place".

The Archigram Archival Project focuses consistently on efforts to document the Archigram magazine. In the magazines you can clearly see how the entire evolves, changing and adapting architecture and urban planning to altered social conditions, and also how this is also reflected in the format, thematic structure and design of the magazine.

The first issue of the magazine, and it came out in 1961, consists of no more than two pages stapled together. The collage of text and images which adorns it was made on a black and white photocopier with only a red potato print to lend the whole some color. The themes consisted of three architecture projects by Archigram members including a mosque design, a competition entry for redesigning Piccadilly Circus in London, and a building project for the Furniture Manufacturers' Association in Berkshire. Just 400 copies were printed at the time and chiefly distributed to English architects.

In later years, namely by the time the fifth edition was published, "Archigram" was already a registered company name. Under the title "Metropolis", urban planning issues were now systematically debated on 22 pages. The print run of 1,250 copies was financed by sponsors, reproduced in multicolor using silks-creening and sold to an international subscription list of architecture enthusiasts for 2 cents a piece.

The Archival Project communicates many such details of the Archigram magazine predominantly through short films that, for example, show former Archigram member Dennis Crompton leafing through individual issues and commenting on them. Transcriptions also make texts easier to read and links are included to forge connections between individual Archigram projects which would not otherwise be obvious. If you are interested in Pop culture, 1960s ideas of utopia, and the future city, then this is without doubt the Website for you. 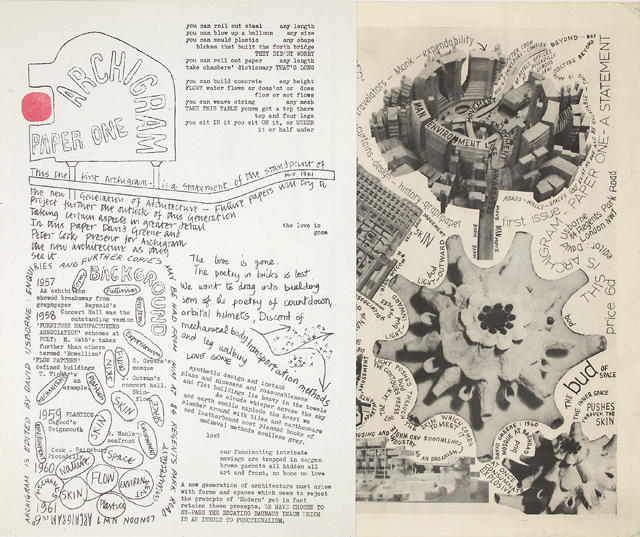