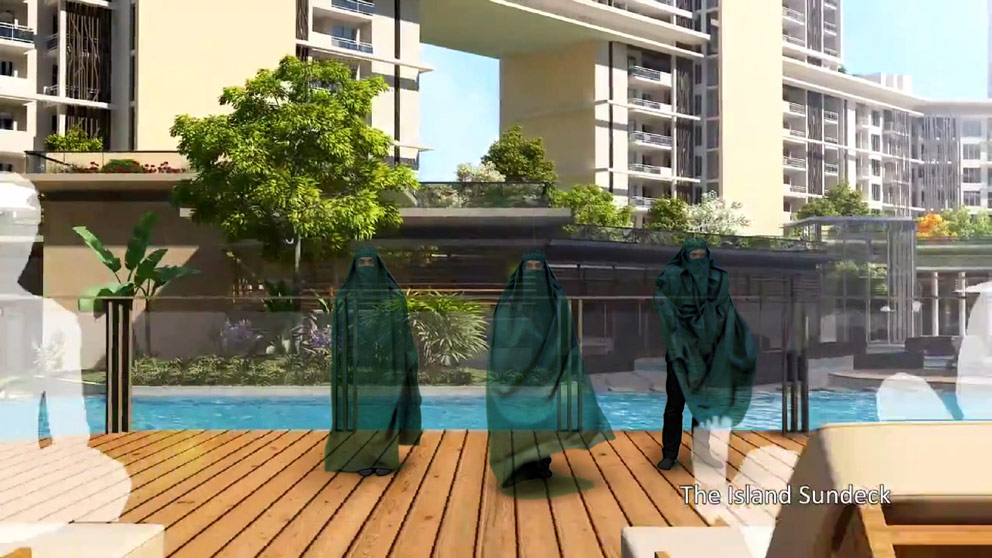 The digital future, at the moment on show at the CeBIT, is crictical reviewed at the exhibition „digital conditions“ at Hannover’s Kunstverein, like Hito Steyerls Film „How Not To Be Seen. A Fucking Didactic Educational. MOV File“. © Hito Steyerl, Courtesy Andrew Kreps Gallery, New York

Let’s take a trip to CeBIT: The date injects excitement into ordinary users’ office lives, much of which they spend staring at progress bars and tiny turning wheels. Focusing their attention on animations to fake being busy in those stressful periods of waiting or responding, which are far too short to engage in anything meaningful. Those days are now over. And no, I don’t mean that chirpy on-screen nonsense, but the day when you could take a trip to the IT trade fair. It has closed its doors to ordinary punters. Only trade visitors will be admitted from now on.

So has this changed the overall picture? Not really, as first impressions would suggest. As in previous years, the opening presented a brilliant artistic performance with glitzy show moves. In the background: Against the silhouette of the city of the future and beneath a netlike dome we see the outlines of passengers rolling suitcases in dislocated spaces. “To think is to travel,” Gilles Deleuze once stated – does it work the other way round? 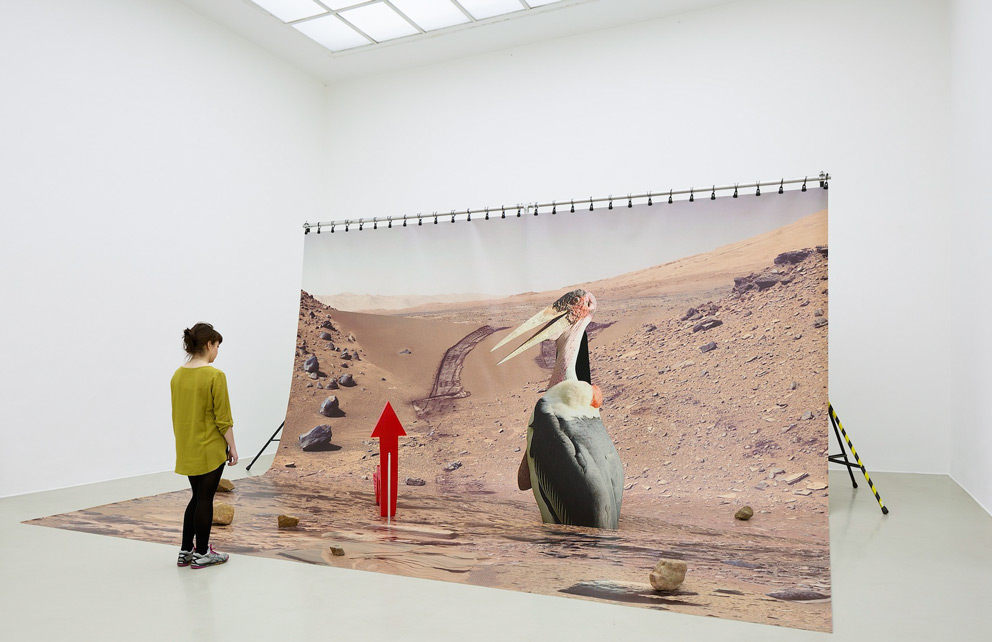 A desert landscape as a digital generated photo canvas, kept in place by “real” stones: Katja Novitskova’s work „Pattern of Activation (on Mars)” from 2014 encourages reflection on the quality of reproductions and virtual worlds. Foto © Raimund Zakowski

Probably not. None of those trying to find their way round this computer cosmos seem to have put their thinking caps on. By contrast, “Digital Conditions”, the parallel exhibition at Kunstverein Hannover, started with the following image: Office workers, tense and stressed out, stare into Lee Friedlander’s camera while trying to look their most dynamic, as if some remote entity had summoned them to do so. US photographer Friedlander shot his portrait series at the Massachusetts Institute of Technology (MIT), in the office world of mainframe computers, back in the early 1980s. Here you will search in vain for that self-absorbed thinker’s pose of someone at peace with himself, such as sculptor Auguste Rodin so famously captured at the beginning 20th century.

He made it at a time, and this is possibly no coincidence, that saw industrialization at its zenith. This year, contrary to CeBIT’s roundup of recent years, industry has made a return to the Hanover trade-fair grounds: While previously all the hype was on celebrating PC tablets and smartphones in whatever season’s fashionable forms and colors, this year the focus is firmly on Industry 4.0 and the Internet of Things. Computer-aided forklift trucks that make their own way through the high-bay warehouse. Production robots that having received an order complete the task individually and tailored to the customer’s needs. Not to forget virtual products such as weather data that sensors pick up from hundreds of thousands of windshield wipers. 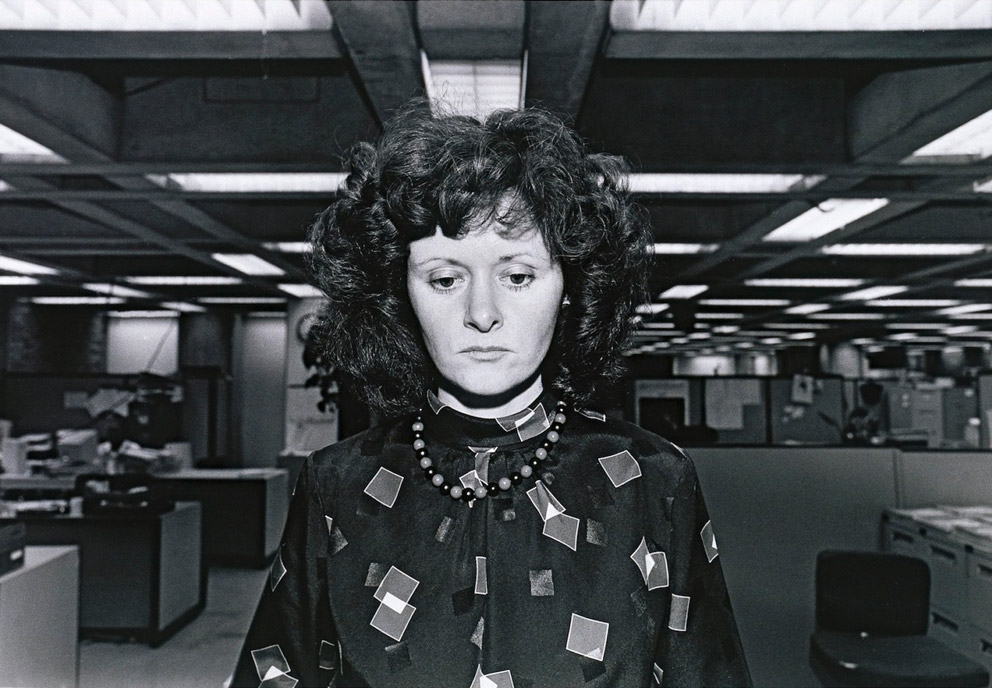 The beginning of the digital condition: US photographer Lee Friedlander shot his portrait series at the Massachusetts Institute of Technology (MIT), in the office world of mainframe computers, back in the early 1980s. © Lee Friedlander „MIT, Boston and vicinity,1985/1986,2002“,Courtesy Niedersächsische Sparkassenstiftung, Hannover

The curators at the Kunstverein, on the other hand, have exercised the necessary restraint in addressing such developments, keeping a cool head. While ever since that annus mirabilis that was 2012 the name of Pierre Huyghe has been synonymous with the triad of “MoMA – Documenta – Biennale”, this sumptuous sounding crème-de-la-crème should not detract from the relationship complex that has been proclaimed art and subtly staged: Huyghe cuts across the downright mundane but swiftly expanding industry of Japanese manga comics with faded notions of literary Romanticism that still keep clamoring in our collective subconscious. This ultimately resulted in Ann Lee, a manga avatar composed using every trick in computer art. A digitally conceived shell waiting to be filled with content, with a soul. E.T.A. Hoffmann’s automatons The Sandman and Olympia spring to mind here. And for a contemporary look-and-feel the tinny high-pitched voice of a space-travel hero has been added – Neil Armstrong’s first words when he set foot on the moon. 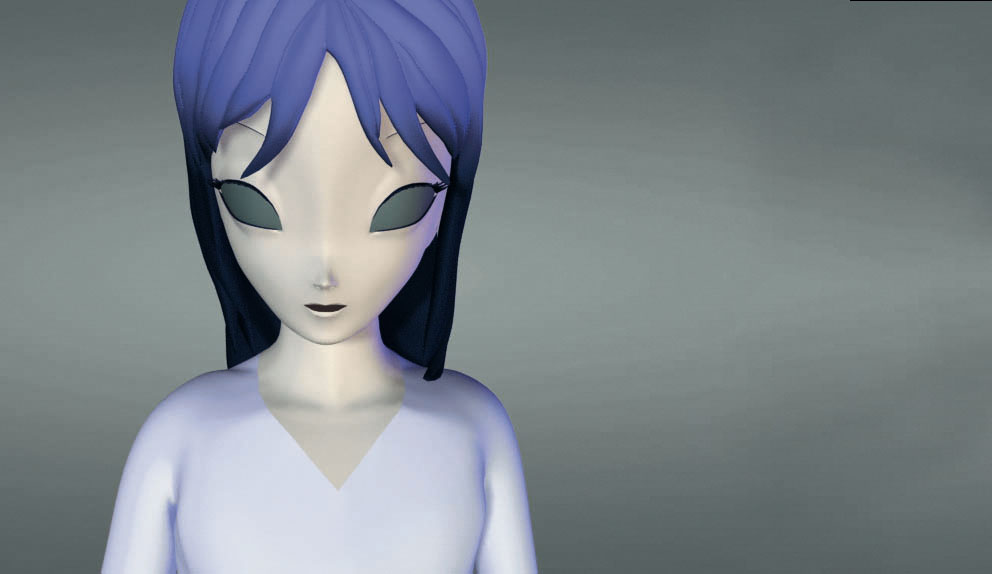 Pixelated black-and-white images and squeaking voices hardly succeeded in capturing Armstrong’s overwhelming, existential impressions when he took his first steps in new, alien worlds. Today, this decidedly physical experience disappears behind 3D simulations that with their inconceivable perfection are truly overwhelming. Artist Katja Novitskova’s answer to this are digital prints on aluminum, from which she excises single elements, making them rise from the image surface like paper cuttings. Take, for example, the photo canvas of a life-size marabou in a desert landscape, suspended from a frame and kept in place by “real” stones. The ensemble consciously appears “constructed” – and encourages reflection on the quality of reproductions and virtual worlds. Here, to travel means to think after all. 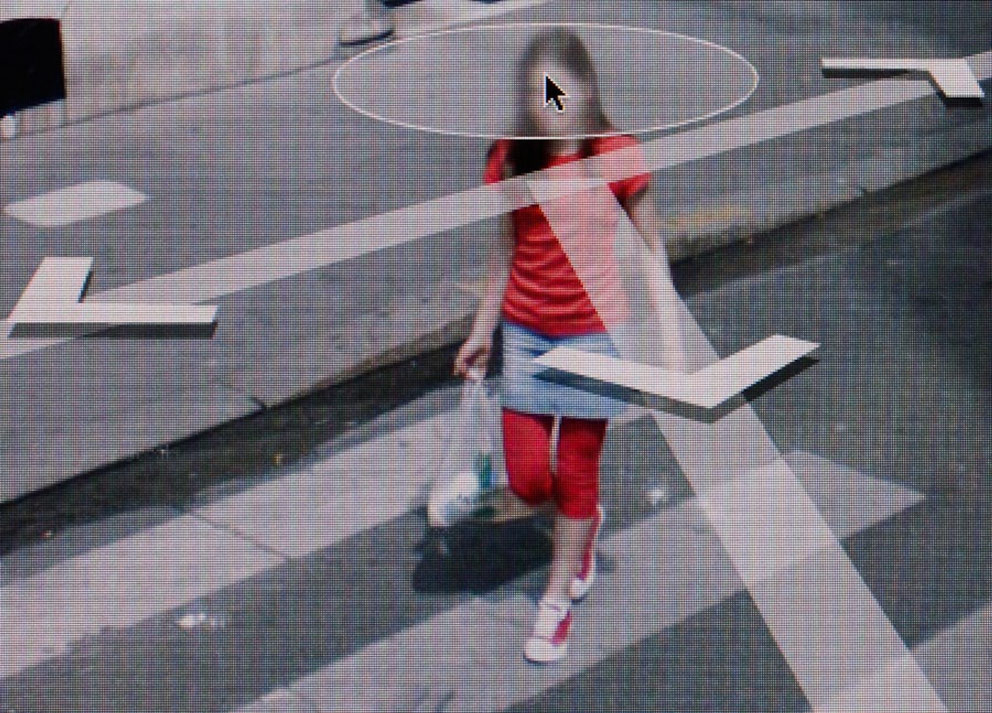 At the CeBIT the digitally controlled robots are a big issue – and at Hanover’s Kunstverein the curators ask if the human mankind will be remote controlled in the nearly future? © Michael Wolf: “Paris Street View 027”, 2009

This probably also has to do with the location at Kunstverein Hannover, the “White Cube” with its tracery windows to be precise. It couldn’t be a further cry from the atmosphere of trade fair, which concerns itself with technical parameters, with outdoing one another with top performances. It simply wouldn’t work here. So instead of chasing the fetish of ever higher “resolutions”, Thomas Ruff used the pixels of digital photography as the basis for his compositions: colored prints that are several meters tall. The results: abstract sculptures that only give a very vague idea of the forest or river landscapes that served as the original subjects. These images not only sharpen our gaze but challenge us to ponder them intellectually. In other words, “resolution” in the sense of cognitive resolution of issues. 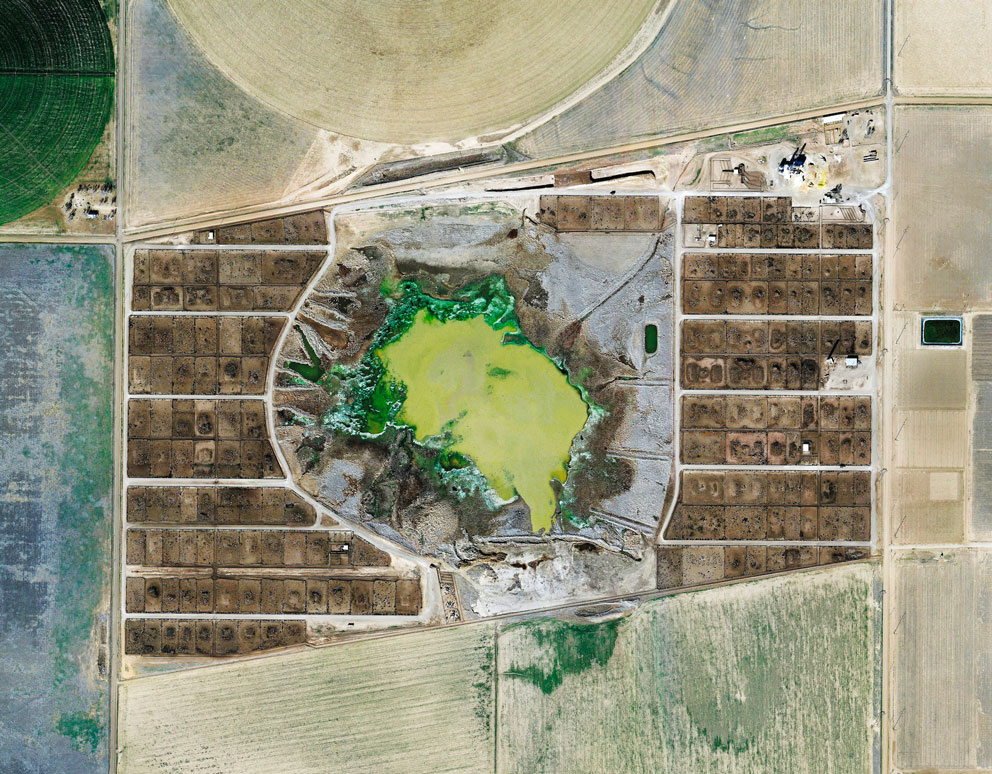 Moreover, the exhibition does not eschew down-to-earth contributions suggesting that someone dug deep in the media archives to produce them. Using an antiquated overhead projector, Julien Prévieux demonstrates a number of hand movements, gestures whose meaning would remain obscure was it not for the corresponding touchscreen. And yet, by asking the question “What Shall We Do Next?” the Paris artist cuts to the chase, albeit unexpectedly: Patented as interface movements, these manual oracles have long since lost their mysterious appeal. Deeply human gestures, transformed and coded as impersonal command language. Compared to such interventions into the human condition Lorna Mill’s works almost look sweet: Pixelated characters flit across seven screens as if they were icons from the early days of the medium that have been left on the loose. The only thing missing is in these fast-paced video sequences are Pacman or Super Mario celebrating their resurrection. 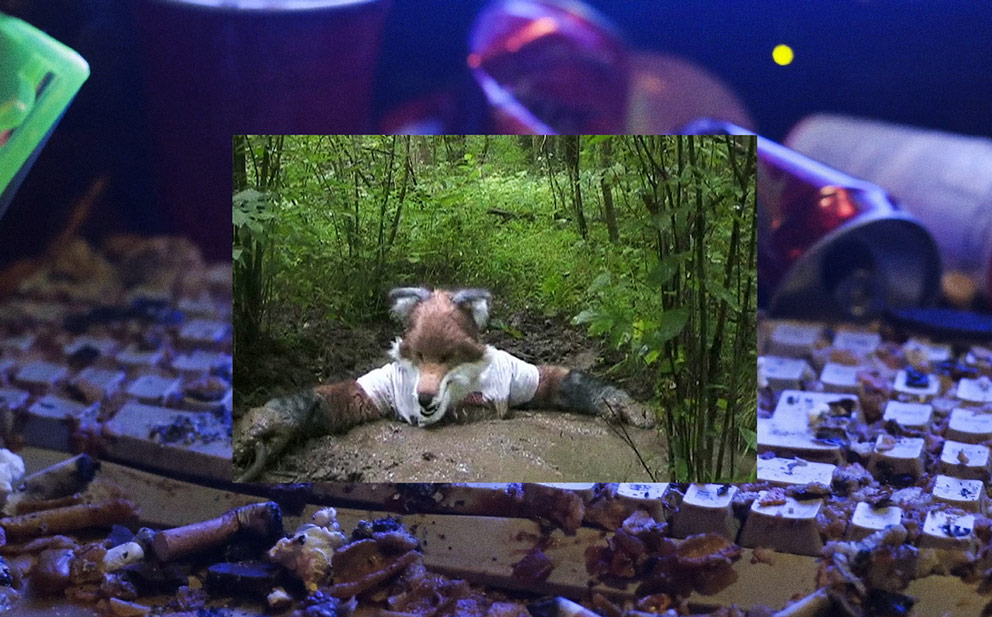 What remains is the critical outlook for the digital future. That job went to Hito Steyerl. Sadly, despite all the technical efforts she employs the Berlin filmmaker quite hopelessly lags behind reality. And her ironic thrust reminiscent of Monty Python does not help to make things any better: The installation and the film “How Not To Be Seen. A Fucking Didactic Educational. MOV File” demonstrate ways in which citizens can evade being monitored, for example by satellite surveillance systems, and make themselves invisible. For example, by donning unusual headgear such as grass green cubes, a camouflage that should not be picked up by infrared cameras. But it doesn’t really matter. An issue that does matter are autonomous systems such as “killer drones” that use facial recognition or language recognition to match people’s profiles – and then automatically decide on their liquidation. As yet it has not been addressed.

P.S. This would render the user in front of the screen redundant. In theory. For the time being we are still required to do all those mundane IT tasks – just as the progress bars and transfer wheels.

Smart Cities, Big Data, Civic Hackers and The Quest For A New Utopia: The more complex the systems become, the more error-prone they get. An critical article by Anthony M. Townsend.
(01 April 2014)

Digital Bauhaus: Can the idea of the Bauhaus be transposed onto the digital age? This was
the issue tackled at the “Digital Bauhaus Summit” in Weimar.
(22 June 2014) 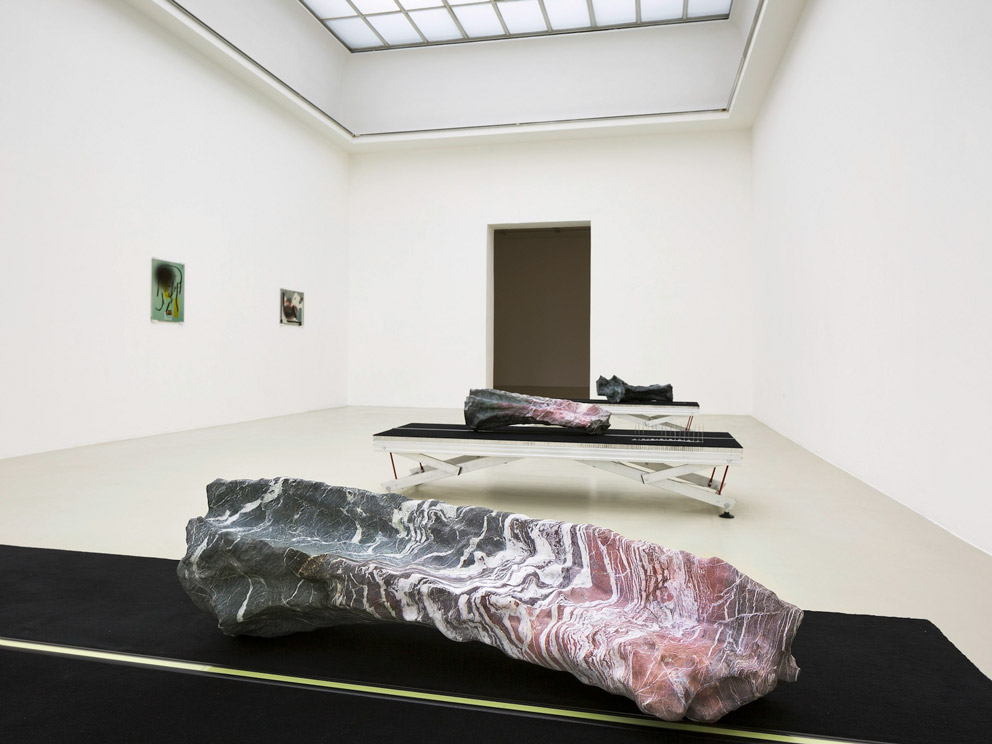