top
Where changes are lived
by Florian Heilmeyer | Sep 9, 2016

Dusk bird’s nest: Guests of the Klunkerkranich can enjoy an impressive panorama view of Berlin while sipping a sundowner.
Photo © Julian Nelken, Klunkerkranich

An architecturally very plain shopping mall boasting 27,000 square meters of retail space and home to 60 stores is located directly next to Berlin’s “Rathaus Neukölln” subway station with its striking, round glass tower of the “Neukölln Arcades”. It’s a “typical mix” of outlets, ranging from a post office to a Kaufland and from a Mytoys through a Mediamarkt and Hugendubel to a fitness studio, a multiplex movie theater and the local “Helene Nathan” municipal library on the upper floors. At least the brash offerings snuggle around an airy oval foyer beneath a conical roof and attract a very mixed public here, on Karl Marx Allee, which is still dominated by bargain-basement offers.

The rear, essentially unobtrusive part of the building is a parking garage that uses the entire height in order to enable car users to drive as close as possible to the movie theater and the library – not that this possibility was ever really exploited, and since the parking garage opened back in 2000 its uppermost deck has become something of an insider tip: a place where the young can meet up for a sundowner and a joint looking out over the roofs of Berlin. Often the deep boom of a massive bass line was to be heard, emanating from the stereo system in some pimped up auto. Until the hipsters arrived in Neukölln, that is.

Among them were Robin Schellenberg, Dorle Martinek and Julian Nelken, who in 2009 opened the “Fuchsundelster” in the nearby, then still very dark Weserstrasse – a bar that hosted concerts in the old coal cellar beneath it. Quite the opposite of a roof garden – and perhaps that is why they found Dorian Mazurken’s idea so appealing – to create a garden as an events space on the roof of the parking garage.

The asphalt of the former park deck has been clad in wood and chairs, benches and tables made from those Euro-pallets so typical of Berlin club-land. Since opening in 2013, the 2,500 square meters have seen ever more plant tubs, seating coves and platforms added. There’s a sand box, birdhouses (they look cool rather than inhabited) and a communal garden with tomatoes, raspberries, fat pumpkins and fragrant bushes of rosemary. In-between, the international urban hipsters of Berlin sip cappuccinos or local beers. In one corner a hive of bees buzzes, producing Neukölln honey. Indeed, there is now even a “mountain cabin”, covered and heated, enabling operation all year round.

It has become an astonishingly inclusive location where entrance is free of charge during the day and the program is exceptionally broad: electro-DJs are at the decks up here just as often as are Jazz bands and there are readings, plays, classical music and shared garden activities. All in all, the “Klunkerkranich” sets out in this way to attract a very mixed audience, offers breakfasts, leisure breaks, beverages or an evening dance. Here, tourists rub elbows with old and young Neuköllners, with or without kids – and of course with hipsters with their carefully groomed beards and cloth bags. It is neither Berlin’s first nor its last roof garden, but certainly one of the largest and most comfortable – despite the wind that tends to whistle across Neukölln’s tenement blocks with their standard eaves heights. And the only one there is a complete making-of film about: “Du musst dein Ändern leben” by Benjamin Riehm, who followed the project from the very beginning. 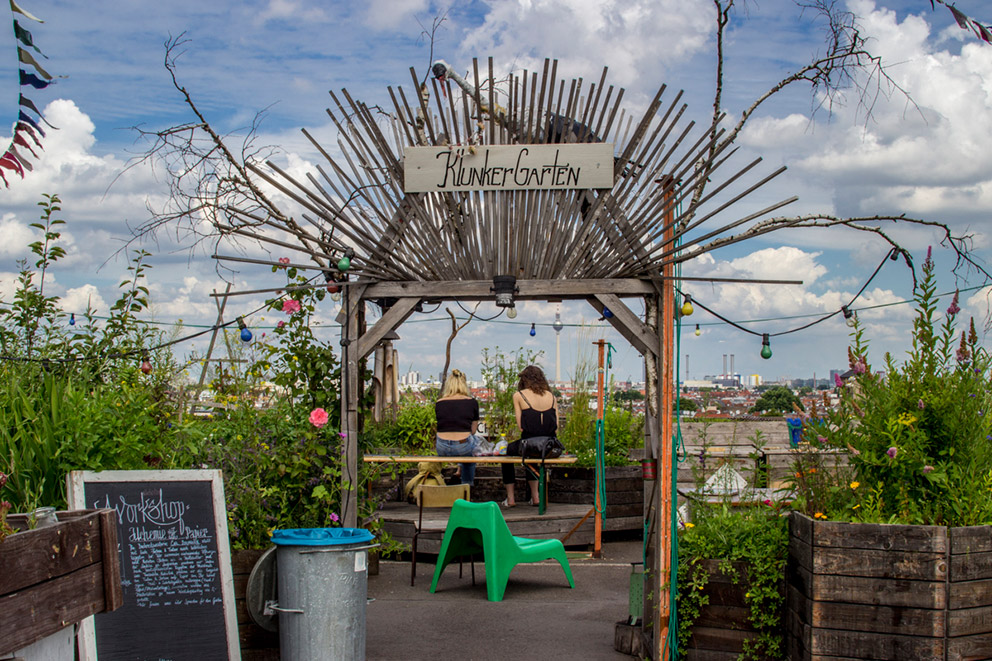 Garden above the city’s roofs: The once miserable concrete expanse has long since become a green idyll. Photo © Julian Nelken, Klunkerkranich 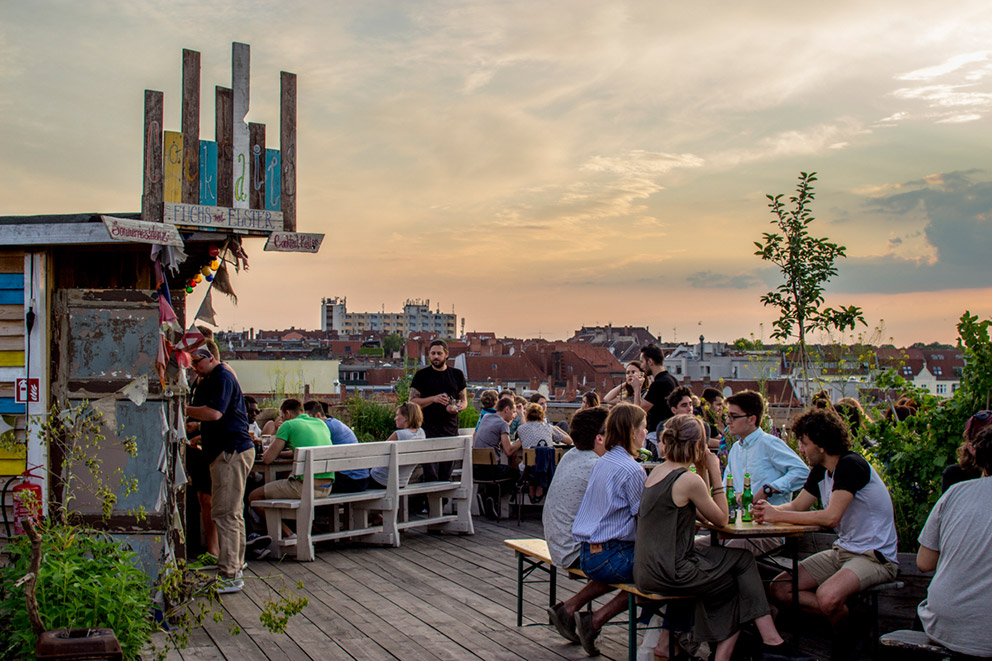 International meeting point: Visitors from all over the world now flock to the multistory carpark roof in Neukölln. Photo © Julian Nelken, Klunkerkranich 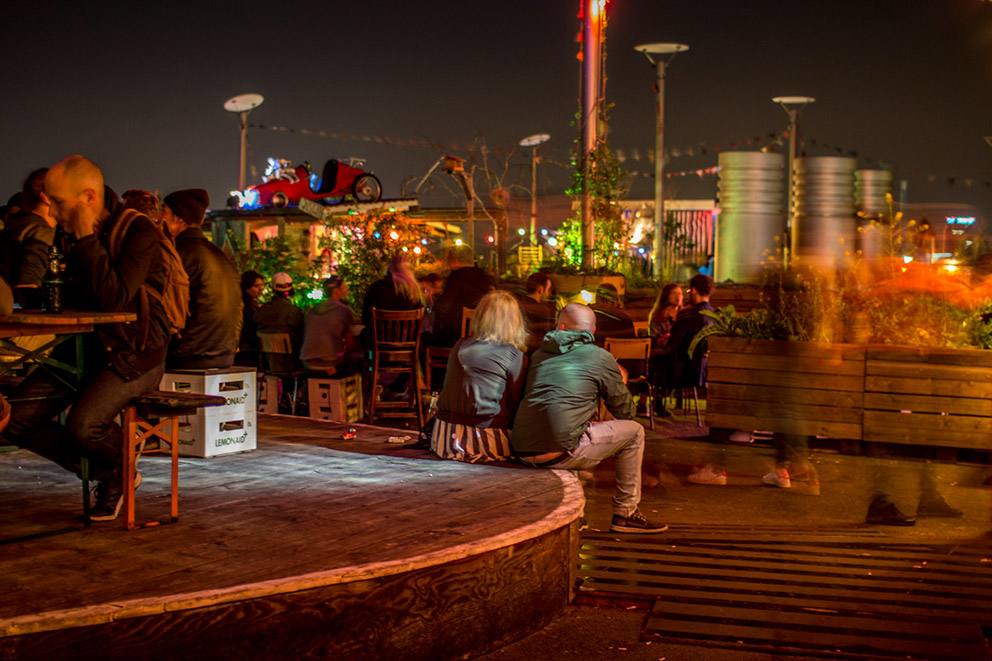 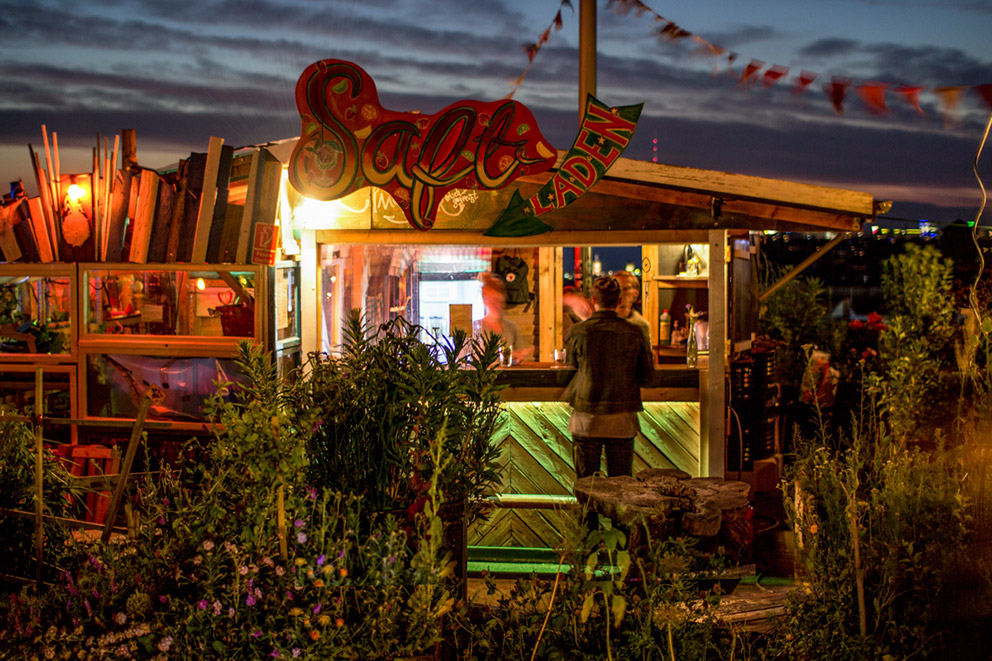 Blue-hour kiosk: And it’s not just about juices – you can imbibe a good after-work beer here too. Photo © Julian Nelken, Klunkerkranich 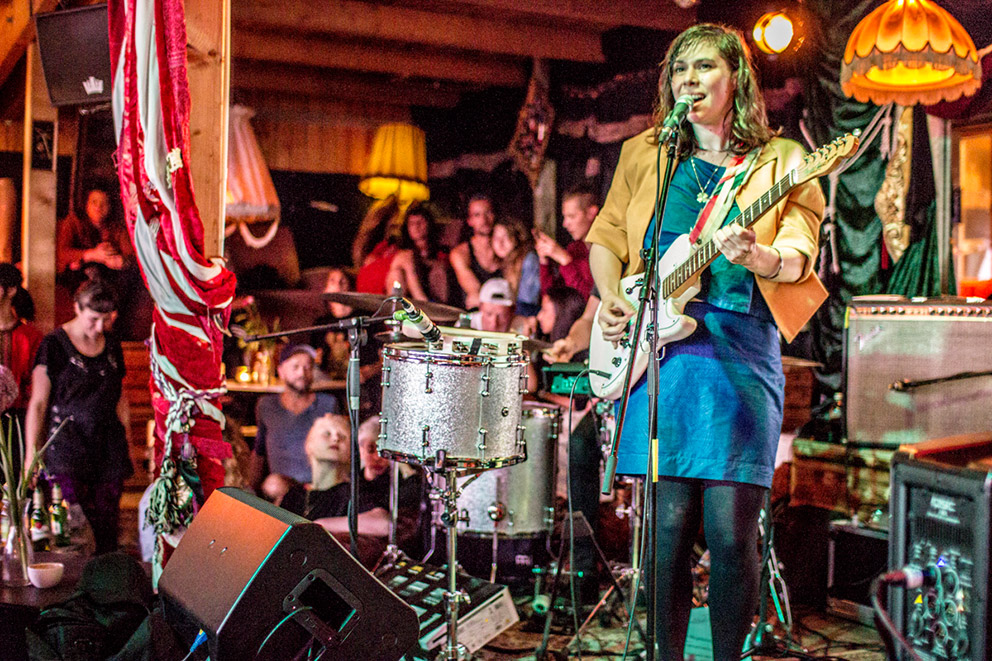 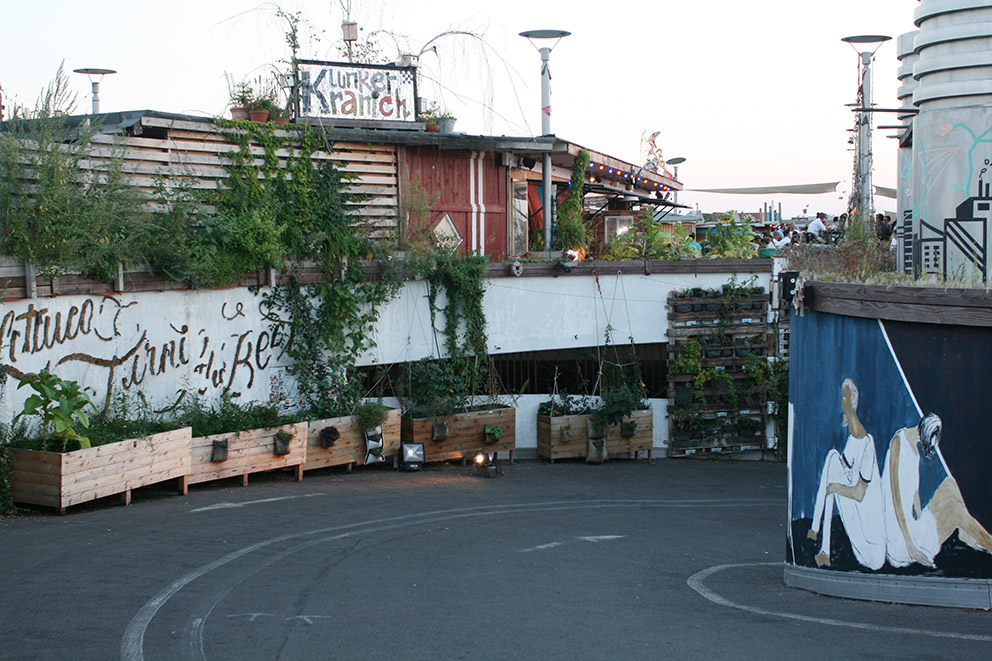 That soft homewards curve: The ramp leads down to the elevators. Photo © Fabian Peters, Stylepark
Advertisement