top
Where trolls climb the mountains
by Milenka Thomas | Sep 14, 2012

Just as majestic as the meaning of their names Bispen (Bishop), Kongen (King) and Dronninga (Queen) stretch their snow-covered tops to the sky. Between the three mountains the Stigfossen waterfall plummets a full 180 meters. Just a few kilometers away begins the famous Geiranger Fjord, which in 2005 was named a UNESCO natural heritage site.

Right in the middle of this spectacular landscape in the West of Norway you find the Trollstigen, a pass that winds its way up the mountains making eleven tight hairpin bends and reaching a height of as much as 852 meters. Arguably it is the combination of natural spectacle and the fact that part of the road is hewn directly into the rock that makes the Trollstigen one of the country’s most famous tourist attractions today.

And of late a large-scale architectural project has acted as a magnet attracting visitors from all over the world to the region. After a seven year construction period, the opening of the “Trollstigen National Tourist Route” was celebrated this June. The extensive project comprises various structures including a tourist center complete with restaurant, bridges, footpaths and viewing platforms, all of them offering stunning views of the mountains and the surrounding characteristic fjord landscape.

From the beginning, the architects had a clearly-defined brief. As the focus was to remain clearly on the natural spectacle the architecture itself should not be overly eye-catching, with the idea being that it blends subtly into the surroundings without stealing the show from the landscape. This by no means easy task was placed in the hands of a local architect’s office as they were felt to have the best possible understanding of how to embed the architecture in a typically Norwegian landscape.

In realizing the project Oslo’s Reiulf Ramstad Architects decided to incorporate the natural setting directly into the architectural design. As was the case with the pass road, parts of the new trails have been hewn directly out of the mountain. Similarly in the choice of materials and colors the architects took their cue from the landscape and opted for concrete or cement that merges into the surroundings. Several railings are clad in Corten steel, whose characteristic rosy patina simulates an artificial aging process and forms an effective color contrast to the remaining materials. Finally, the trails and viewing platforms have jagged shapes to harmonize visually with the hair-pin bends the road takes.

Anyone wishing to admire this project in person must head for Trollstigen in the summer months. In the winter the severe weather conditions make the tourist attraction impassable. 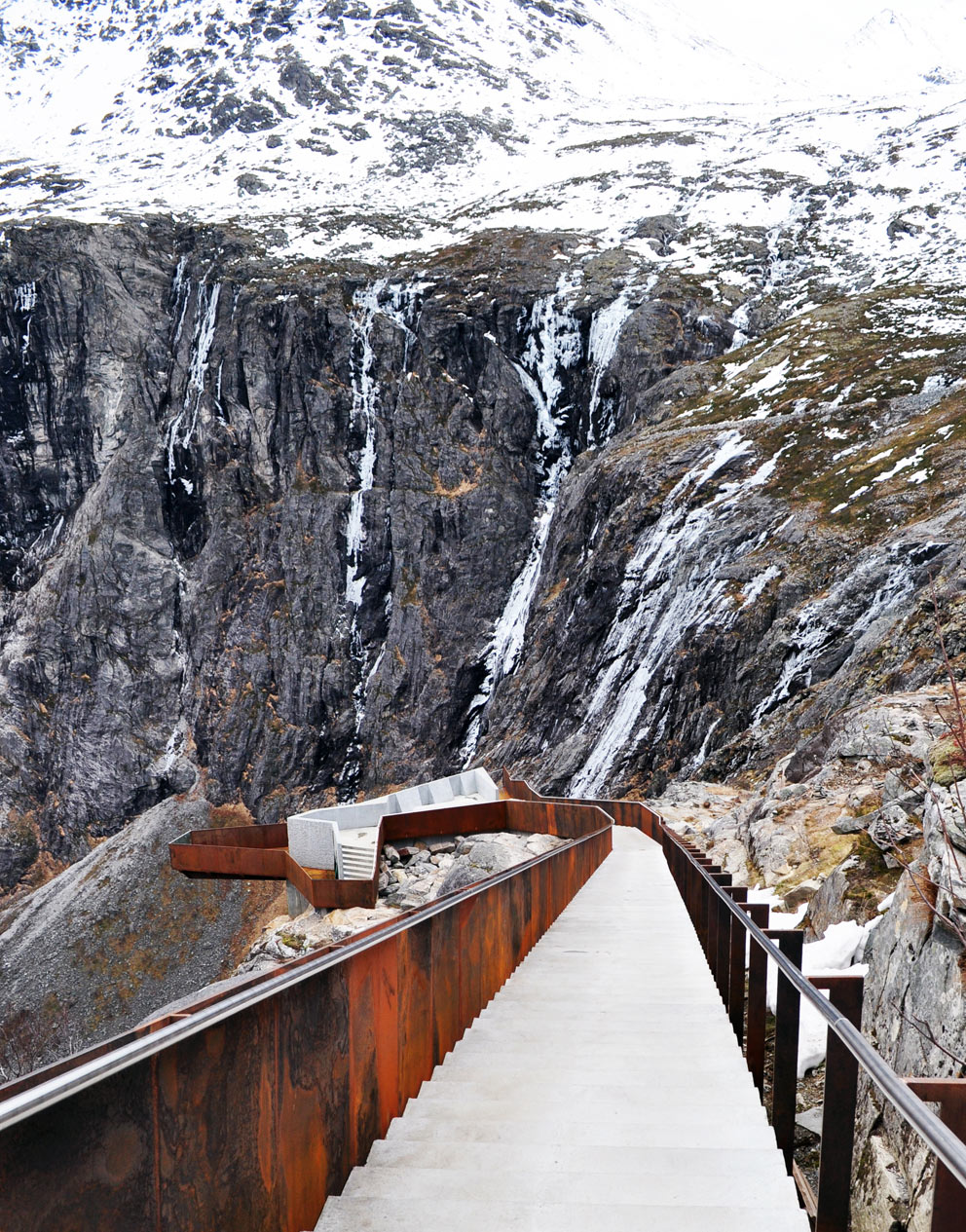 The footpaths of the “Trollstigen National Tourist Route“ lead through a spectacular landscape of fjords and mountains, photo © Reiulf Ramstad Architects 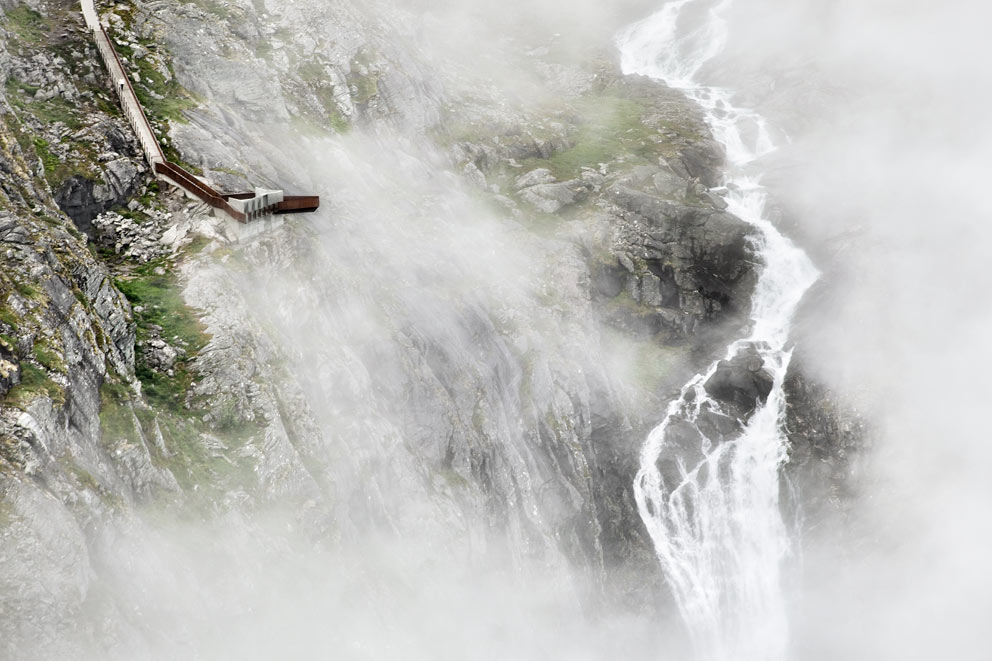 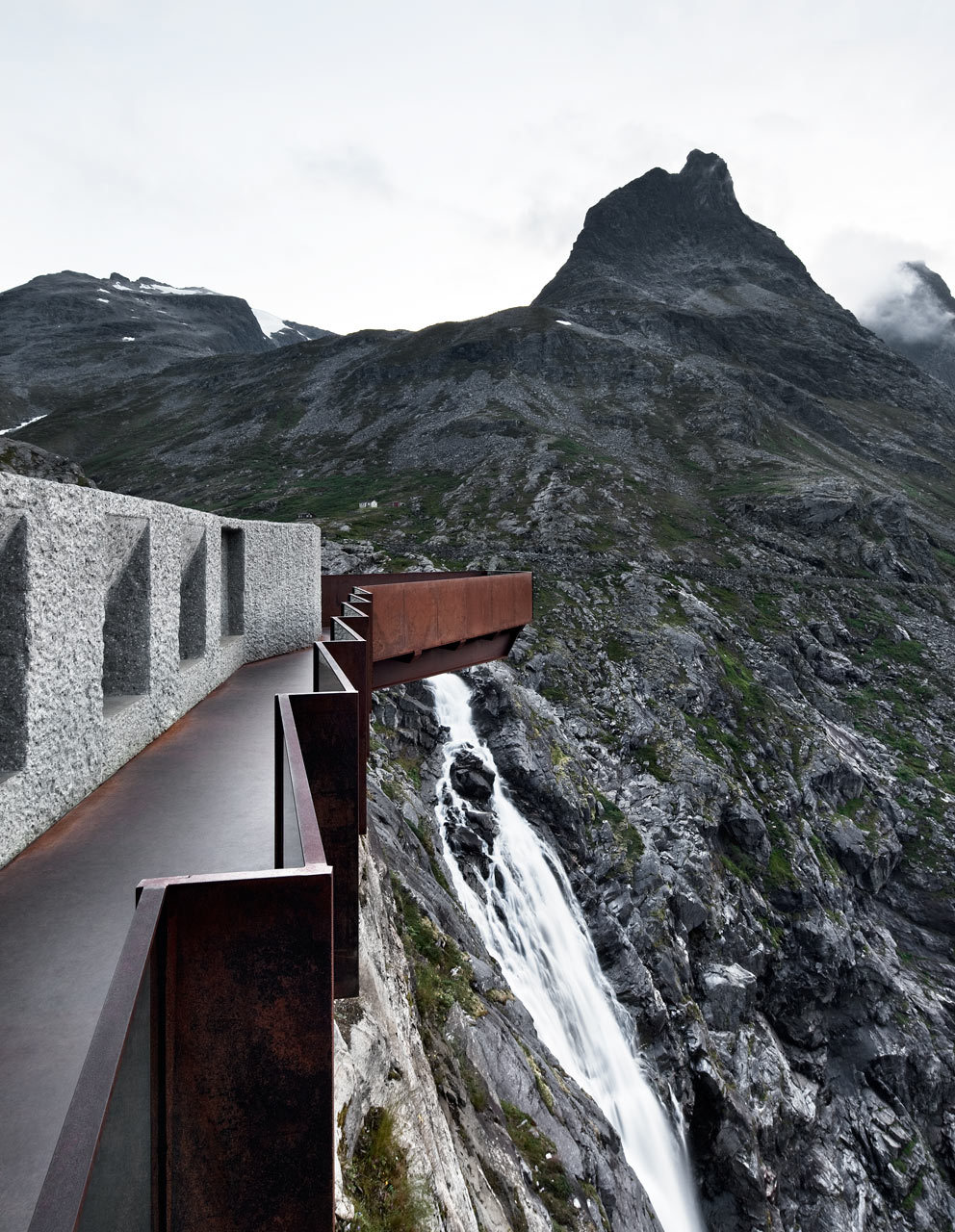 The jagged shape of the footpaths visually resembles the Trollstigen, a serpentine mountain pass in Norway, photo © Diephotodesigner 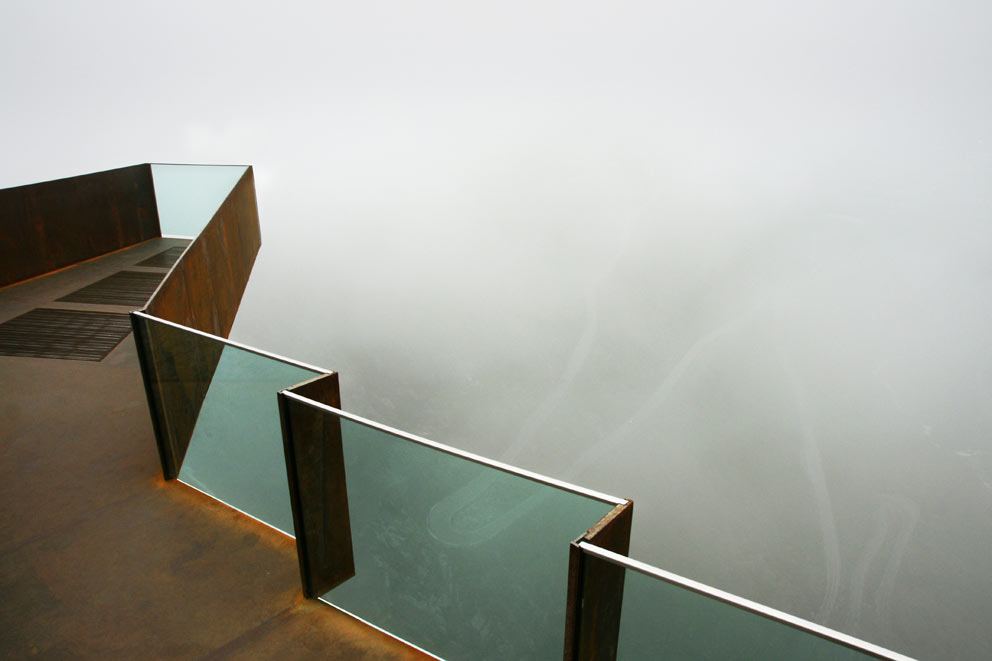 The Corten steel, which has been used for the pathways, has a characteristic rosy patina, photo © Reiulf Ramstad Architects 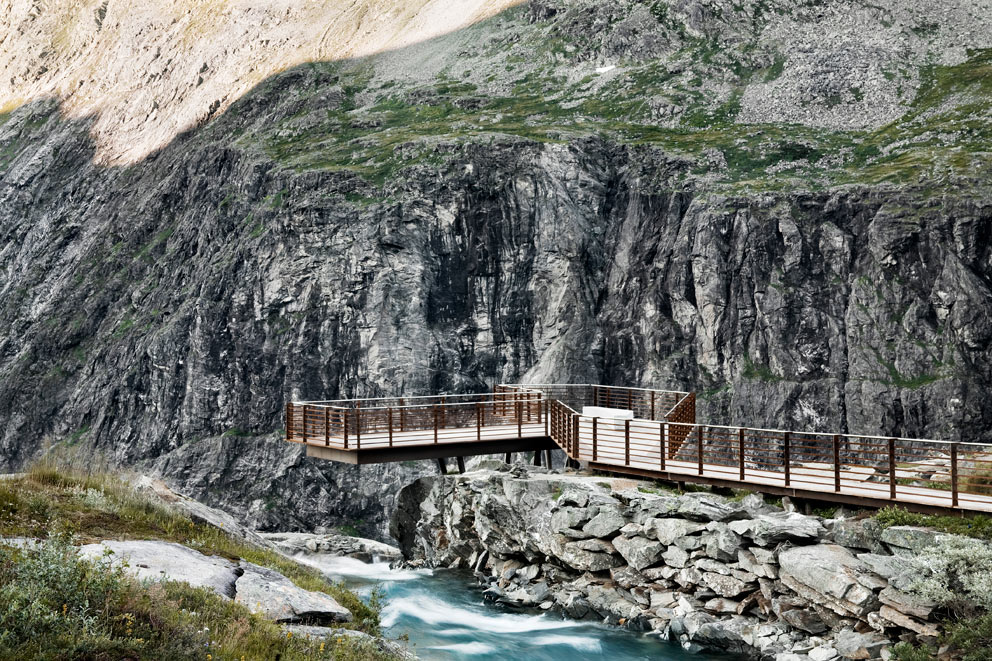 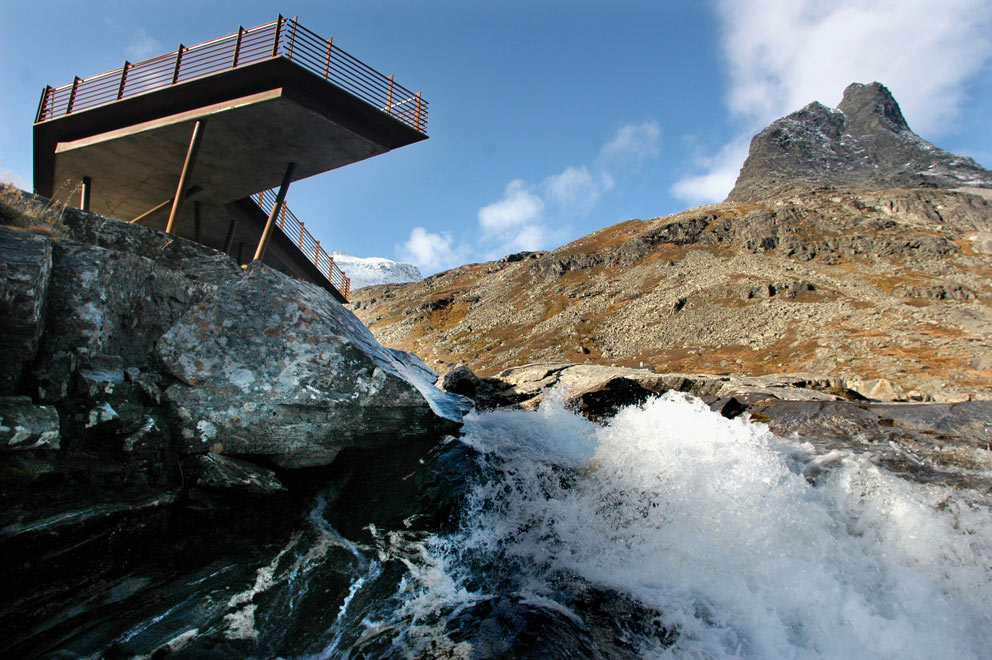 Thanks to the new viewing platforms, visitors of the Trollstigen can experience the natural spectacle from close distance, photo © Reiulf Ramstad Architects 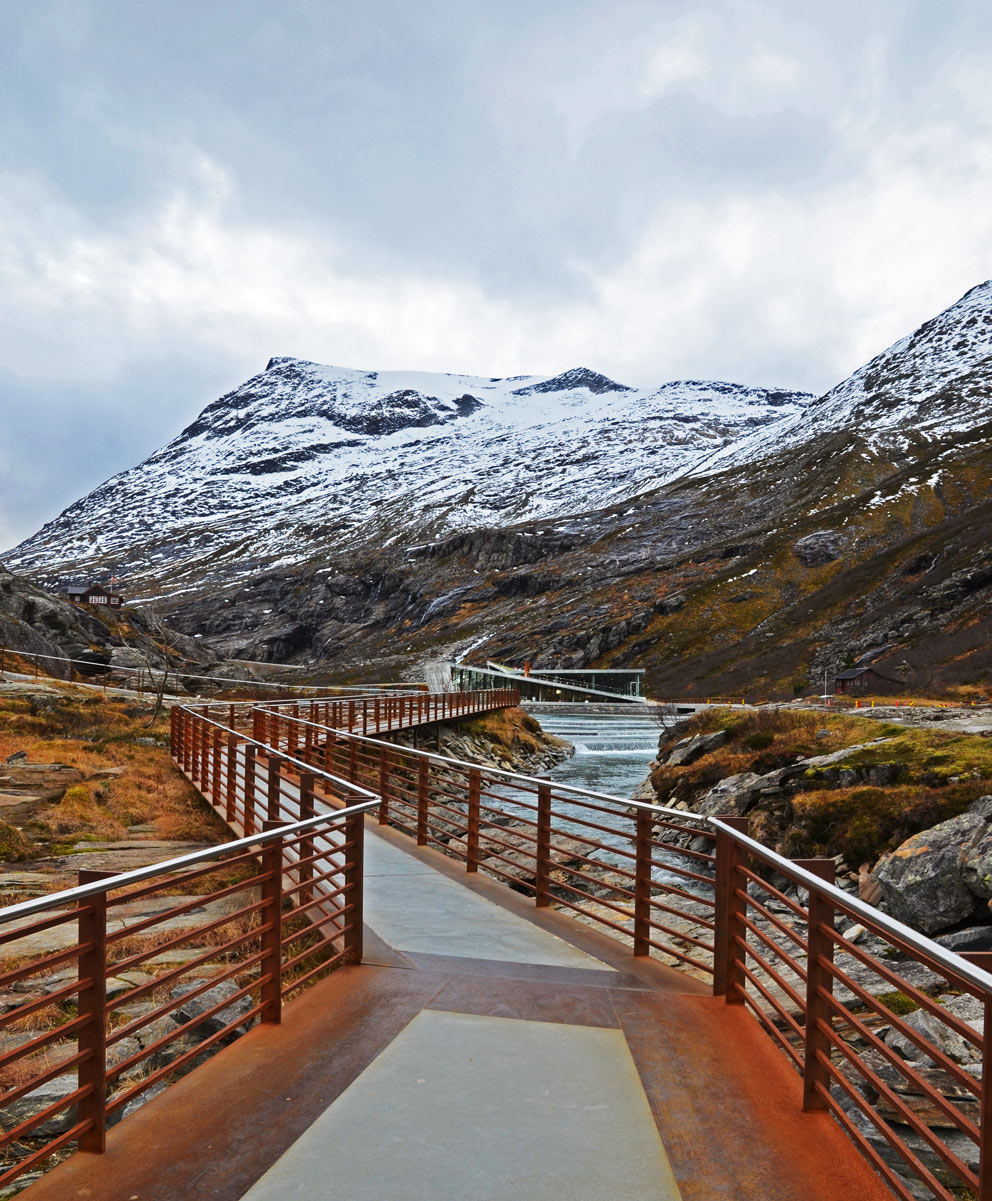 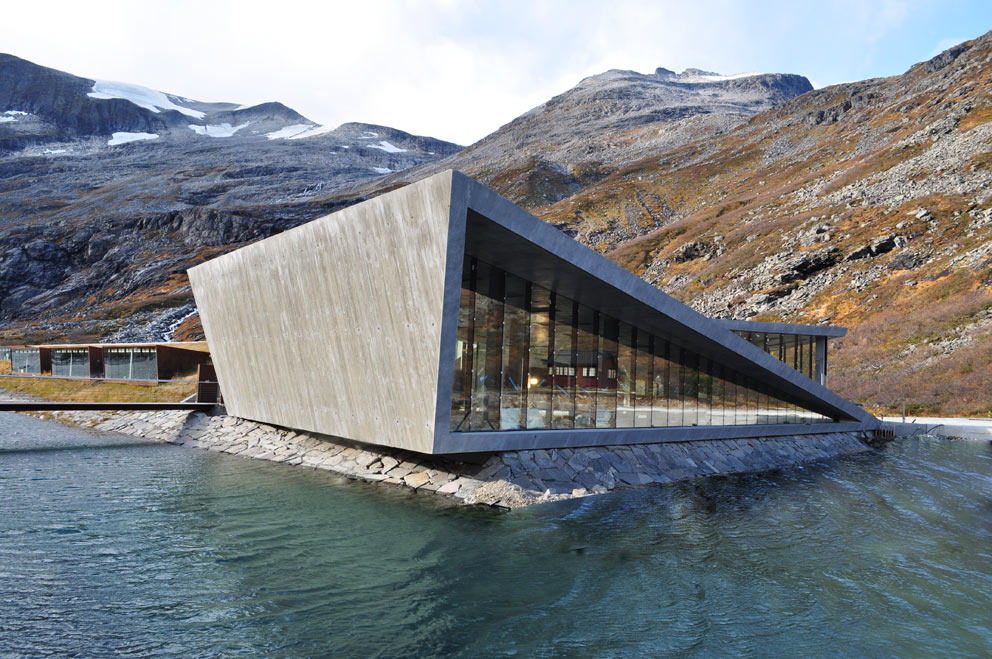 A tourist center is also part of the project, photo © Reiulf Ramstad Architects 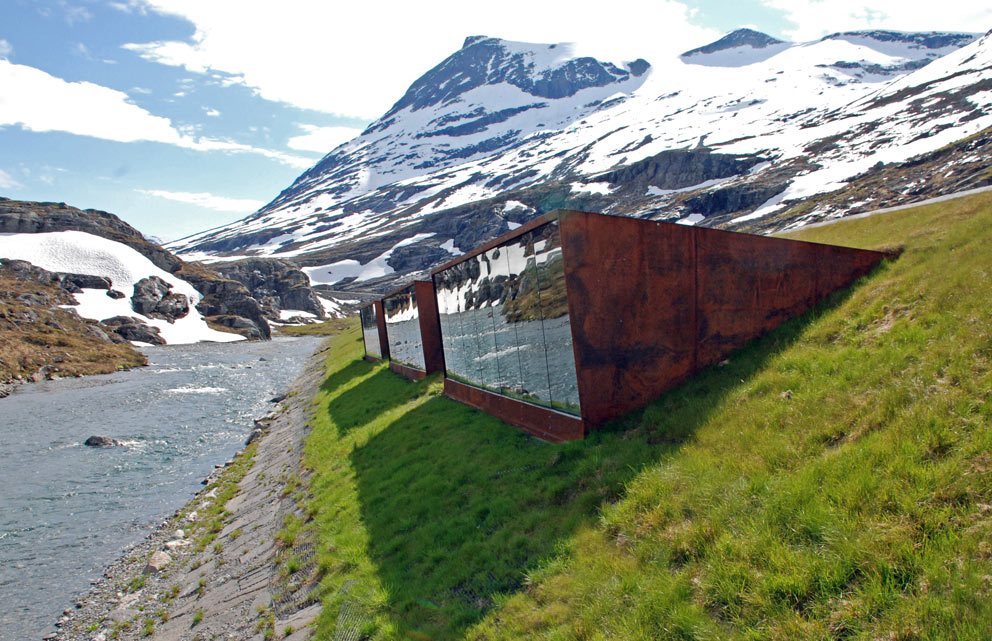 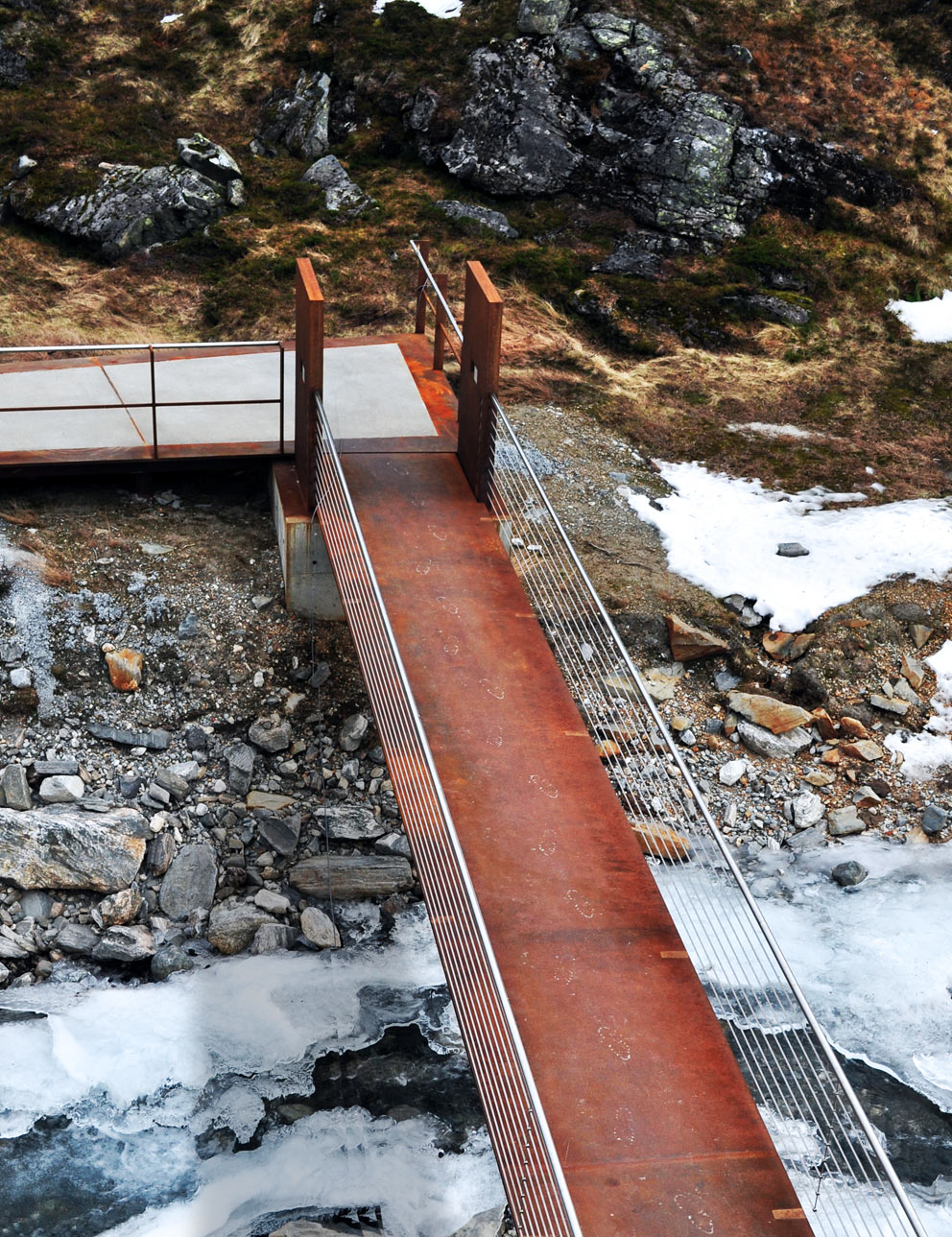 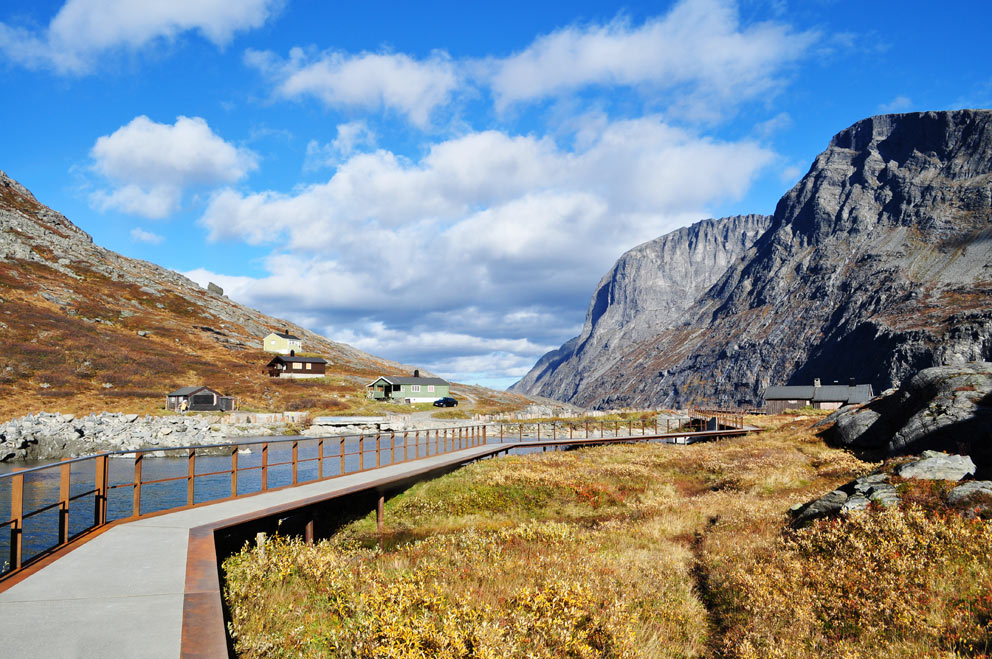 The Trollstigen is located amidst a fjord landscape in western Norway, which is framed by mountains, photo © Reiulf Ramstad Architects 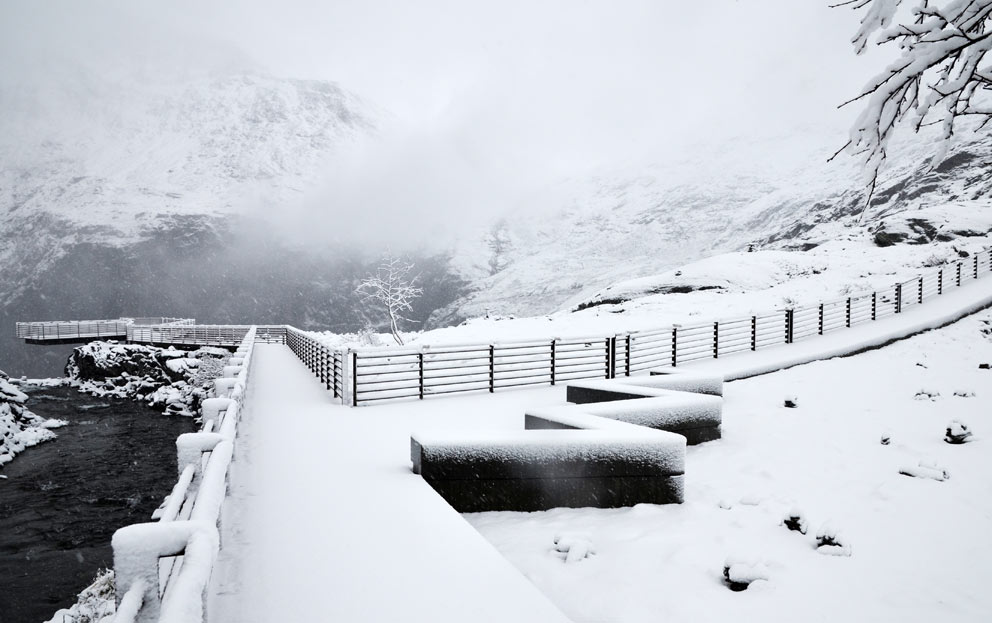 In the winter months, the “Trollstigen National Tourist Route“ is not passable for visitors because of the severe climate conditions, photo © Reiulf Ramstad Architects