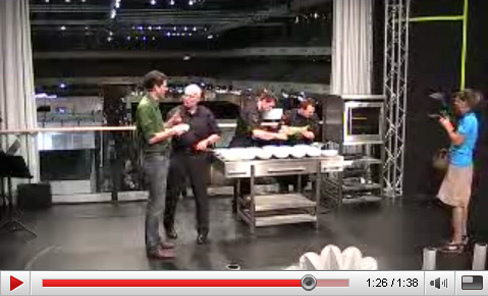 Hardly anything in the last few years has been staged with such a multimedia presence as has cooking. Cooking shows are money spinners, be it several chefs competing against each other on TV to cook the most spectacular of the impressively named dishes, or individual chefs demonstrating what you can conjure up from leftovers in the fridge, or Ferran Adrià, who designs rather than cooks food using a chemistry set, who was even represented at the Documenta 12 with his abilities, after winning the Lucky Strike Designer Award, one of the most highly-endowed design prizes in existence, for his work shortly before. Whatever you used to believe, it is outdated: Cooking is art and wants to take the stage. And what is already there, needs the ingredient of the show.

The Süddeutsche Zeitung Magazin took up this topic at The Design Annual and as part of the supporting program, organized a cooking show entitled “Deutschland kocht über...” (Germany is boiling over..:). The end result was not only a delicious meal cooked by the award-winning chef Tim Raue, but also a talk with the chef, the Head Designer of Siemens electrical equipment Gerd E. Wilsdorf and SZ Magazin Editor Johannes Waechter on the art of cooking, the associated product design and the question of which piece of equipment, which has not yet been made, would an award-winning chef like to have in his kitchen. Naturally, an ice cream maker which satisfies the highest standards of quality.

The culinary result was more than delicious – and so that you can recreate the show on a smaller scale in your own kitchen, here is chef Tim Raue’s recipe:

Drizzle the lemon oil onto a baking sheet, marinate the fillets in it and sprinkle with the sea salt. Bake in a fan oven at 69°C for 18 minutes.

Squeeze the juice from the cucumbers, mix in the agave syrup, cold liquid thickener and the wasabi. Refrigerate the mixture. It must be served cold.

Mix all ingredients together and fill into a piping bag. Pipe onto the fillets.

To serve: Pour the cold cucumber jus into shallow bowls and lay the salmon on top. Finish with the crumble and decorate with a kejang tip.

The Design Annual - inside: showtime