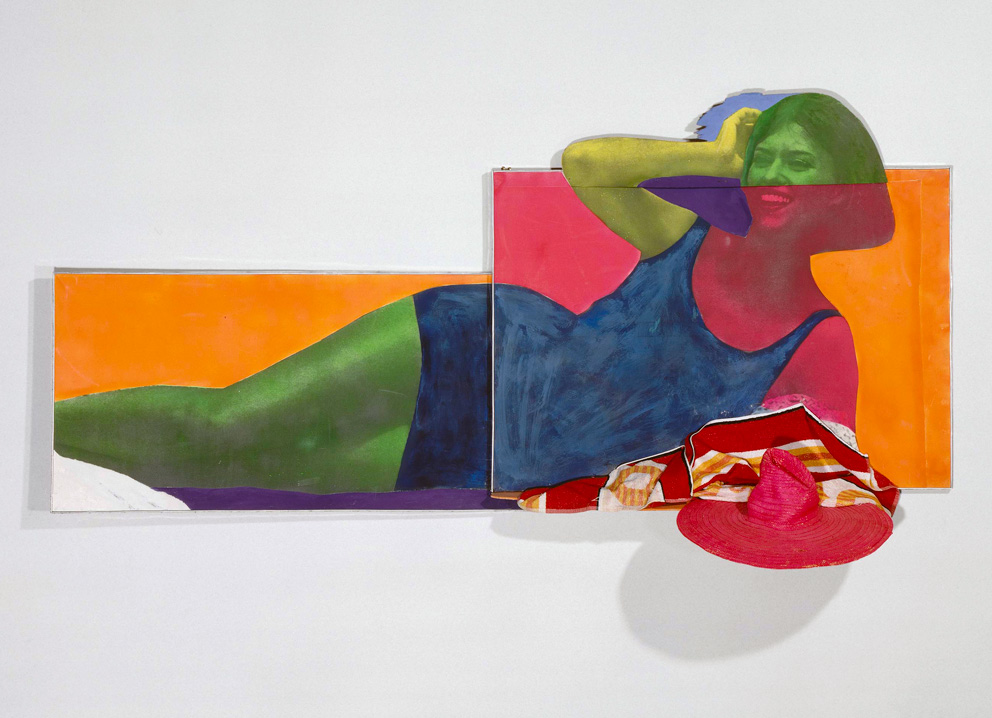 For the entire duration of the Biennale, a Karl Marx treatise will be read out loud in the Padiglione Centrale – professionally recited, easily audible and presented in English, so that as many as possible of the visitors who have flocked in from afar, wearing Gucci, Chanel, Lala Berlin and Issey Miyake and wandering past can appreciate a gobbet of the “Critique of Political Economy”. After all, the idea is evidently to make an attempt to display art as the last bastion of a subversive and consumer-critical power beyond the regime of capital, by reducing it to its discursive components. And to do so at what is doubtless most beautiful of the international art world platforms, namely the Venice Biennale, in as high profile a media manner as possible. 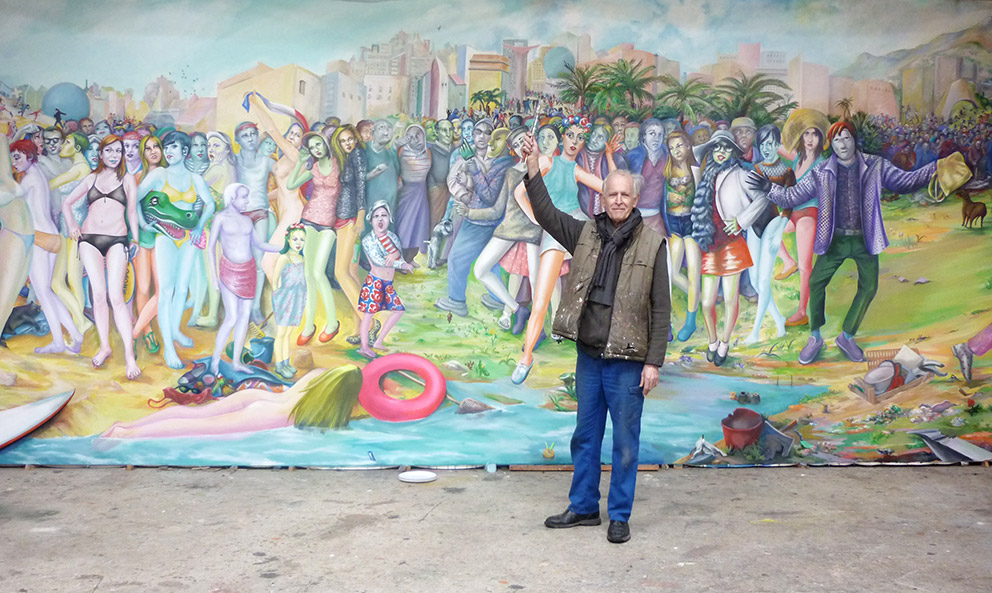 In the Giardini, in the Arsenale and in the temporary national pavilions in Venice in prime postcolonial manner an art concept is extended to embrace a very many players from Africa, India, and Asia, too, a concept with parameters entrenched in the European medium of the art exhibition. At the same time, attention turned in the Palazzo Grassi to an artist who for many years worked in the long-standing European art capital of Paris and was one of the co-founders of the Nouveaux Réalistes. 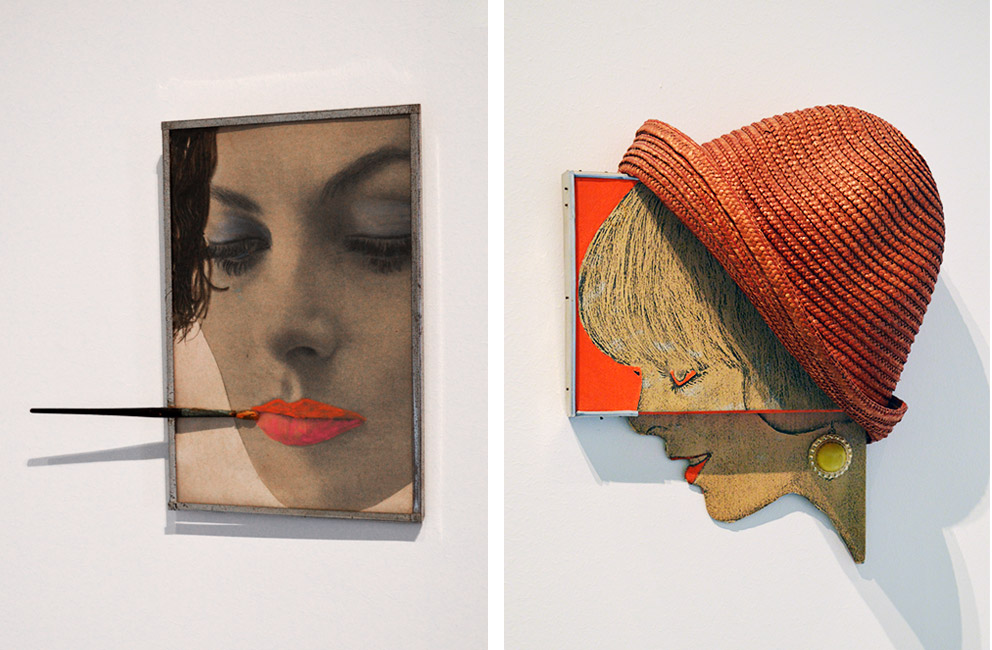 Martial Raysse, born in 1936 on the French Riviera and trained in Nice, is one of the circle of people around Yves Klein, Arman, Jean Tinguely, Raymond Hains and Mimmo Rotella. In 1962 he participated in the legendary Dylaby exhibition; on several occasions he took part in the documenta in Kassel and his works are included in the Stedelijk Museum in Amsterdam as well as at Museum Abteiberg Mönchengladbach. Centre Georges Pompidou in Paris has held two retrospectives on him – and yet Martial Raysse almost got forgotten, had not François Pinault, founder of French luxury goods group PPR and Kering, and the man who runs Palazzo Grassi, started including Raysse’s images and films in his collection.In this way, Pinault shows as much far-sightedness as he demonstrates a feel for current tastes, for Martial Raysse, who now lives in the Dordogne, is quite unsurpassed in combining in an amusing and yet unsettling way the desire that fashion kindles in us with art’s critical potential. 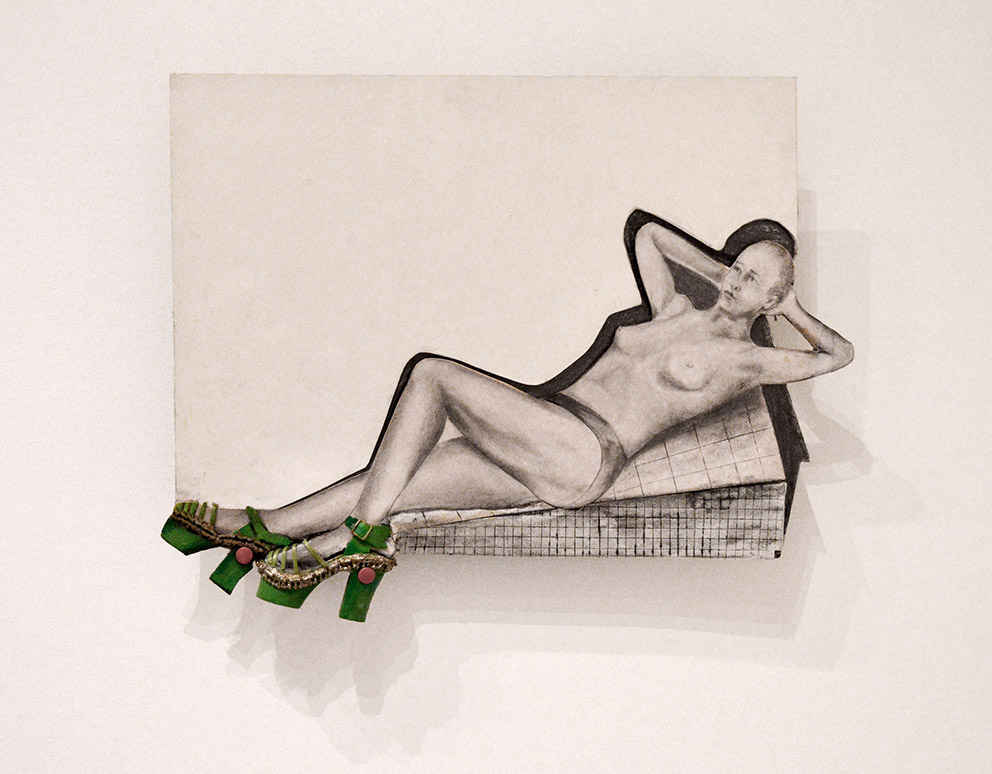 The radical thrust with which back in the 1960s Raysse started expanding the canvas into three dimensions, in which by integrating objects from the world of glam, the jet set and consumerism, he created assemblages that remain astonishing to this day. Powder puffs, peacock feathers, high heels, hats, scarves and artificial grapes all served him not as some basis for skillful artistic imitation, but as a welcome opportunity to enhance the canvas in real terms. Loyal to the Surrealists’ motto and drawing on Lautréamont’s metaphor of the encounter between a sewing machine and an umbrella on the dissecting table, he sought a form of beauty that results from the electrifying encounter of the irreconcilable. In this way, Raysse combined image icons from both art history and the present world with neon tubes and the fetish objects enjoyed by high society. Thus, the catalog accompanying the exhibition in the Palazzo Grassi puts it fittingly: “For Raysse, painting is a militant act.” 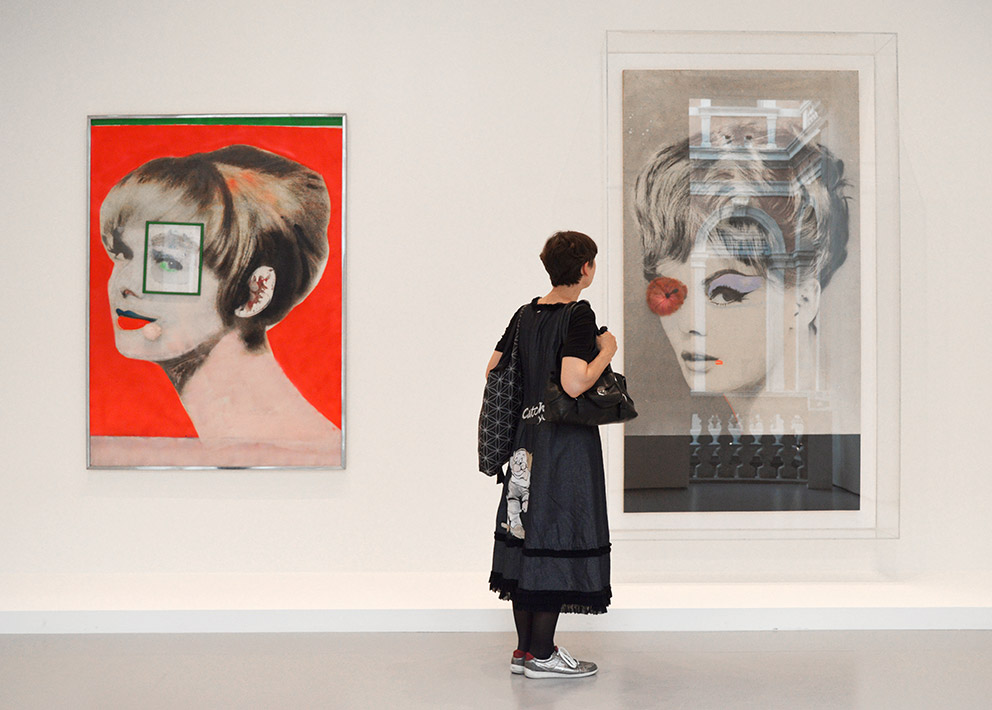 And you could call it militant that Raysse prefers finding to inventing things. Whatever he places in the image already exists: the ideals of beauty, the notions of femininity, the patterns of attractiveness or the gestures of seduction. Raysse thus wrestles away with photo mannequins and actresses, bathing scenes, narcissistic gazes in a mirror, and cosmetic utensils. For him, images of women created by Ingres, Pollaiuolo or Balthus (and he rearranged them and places them in a new figurative context) are no less a matter for the present than the photographs from fashion magazines. 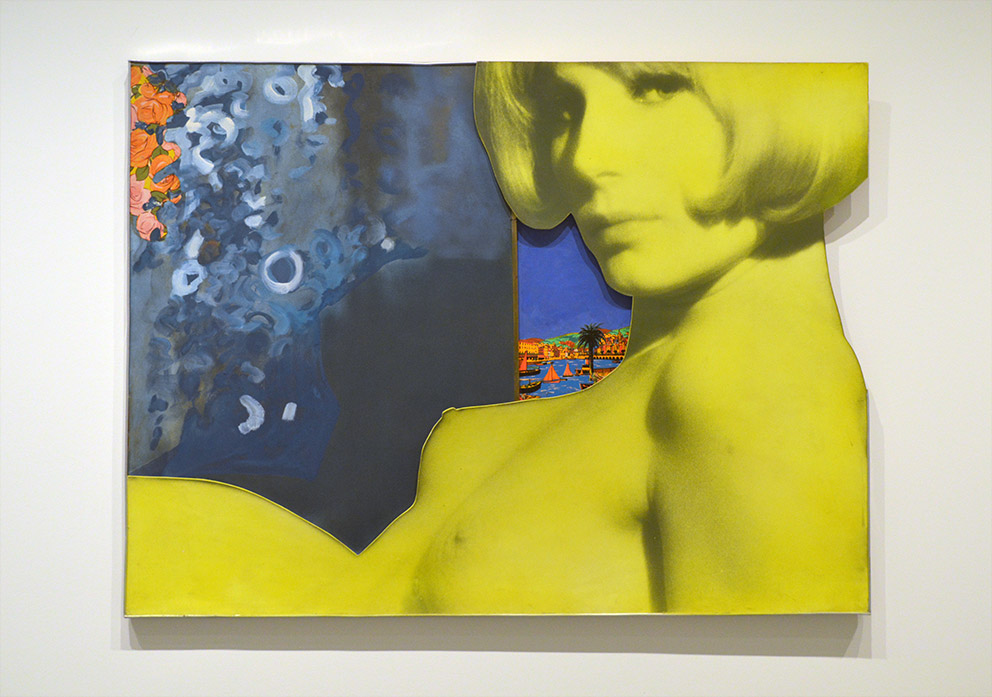 It is therefore only consistent that the exhibition, curated by Caroline Bourgeois, abandons any chronology and, in line with the logic of ready-mades and Pop art, presents a remix of before and after in each room. Starting with humorous collages of materials and sculptural narrations, which viewers can admire in the glass vitrines in the Palazzo Grassi’s entrance hall, through experimental films and installations that are as good as unknown, to paintings and image assemblages that constitute the largest slice of the retrospective, the 300-plus exhibits, made down through the decades, comment on one another. No signs whatsoever of the development of an oeuvre, of work groups or lines drawn between the genres. Rather, the dissynchronous is present simultaneously: high and low, art and fashion, painting and photography, painting and sculpture, things ephemeral and things monumental, the real and the imaginary, the affirmative and the subversive. 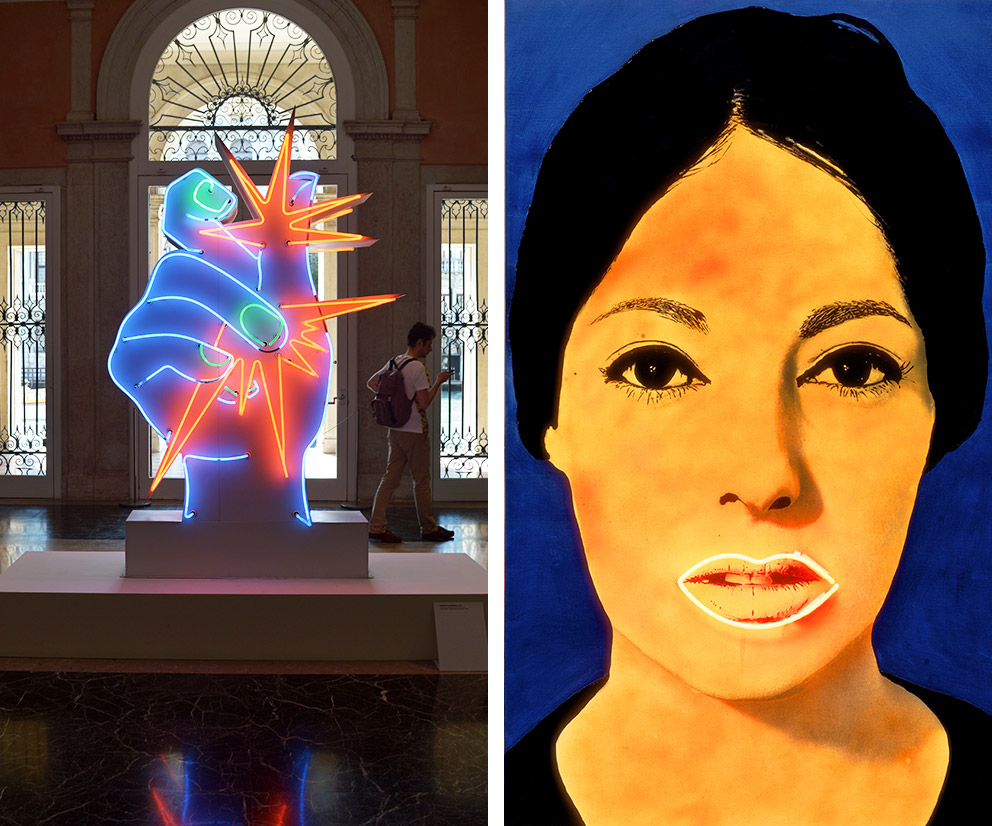 Raysse put it in a nutshell in 2013: “Painting is not bounded in time, it is not related to current events. As I often say, clouds have no age. Similarly, a picture by Mantegna has no age, it is intelligence preserved: It suffices to see it and it comes alive, it is a spirit. The most difficult thing to attain, in my view, is the depth of concentration that artists had, the rigor of their eye, their way of seeing things truly. Drapery, for example: Apart from Yves Saint Laurent, who knows that it is, nobody cares. Since his death, it’s finished.” 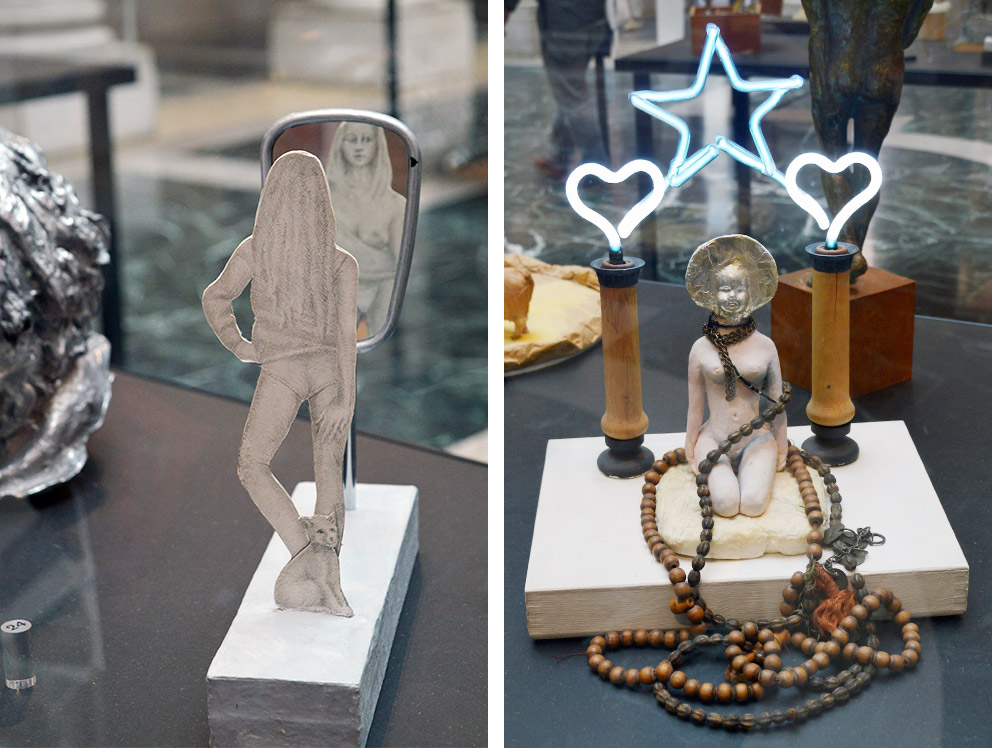 Like Yves Saint Laurent, Raysse remains faithful to corporeality, to tactile textiles, to the folds and gleam of skin, which like a canvas forms a screen onto which images can be projected, and the painting utensils used for everyday beautification, such as make-up, eyeliner and lipstick. Thus it is that anyone who gazes at a Raysse picture first and foremost sees themselves, as doubles. The integrated mirrors, not to mention the themes, provoke a comparison of hair-cuts, clothing and make-up. 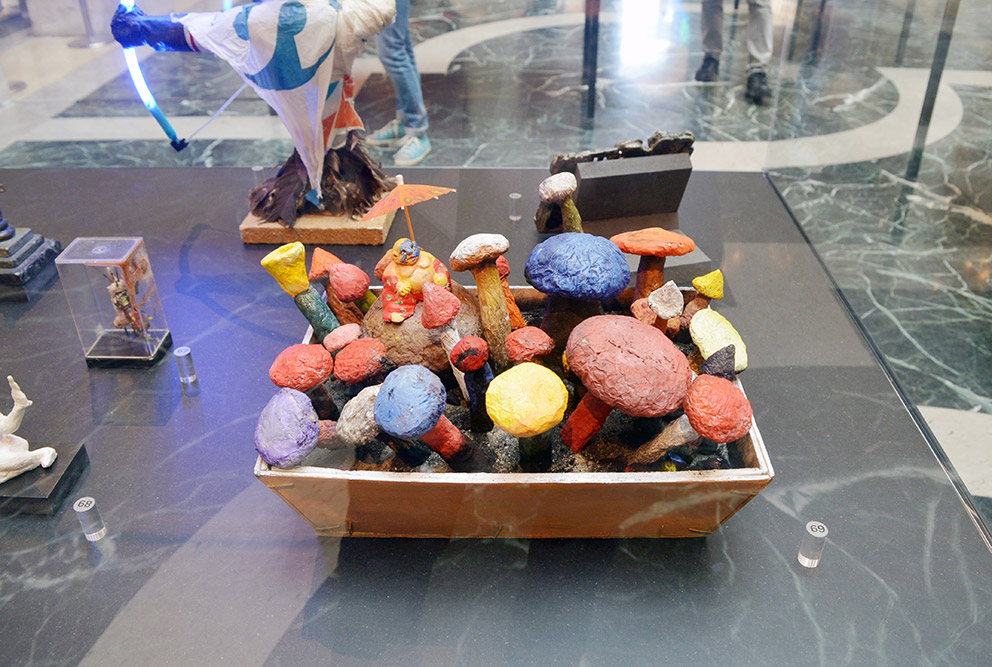 In this way, it becomes evident that whether they like it or not visitors to the exhibition are always in the picture. They are part of a social system that calls itself art and cannot survive without consumerism’s rules of engagement. So how could there be a perspective on the outside, a critique of political economy from the outside? It is good that the retrospective in Palazzo Grassi transposes this insight from the 1960s into the present day of the 56th Venice Biennale. 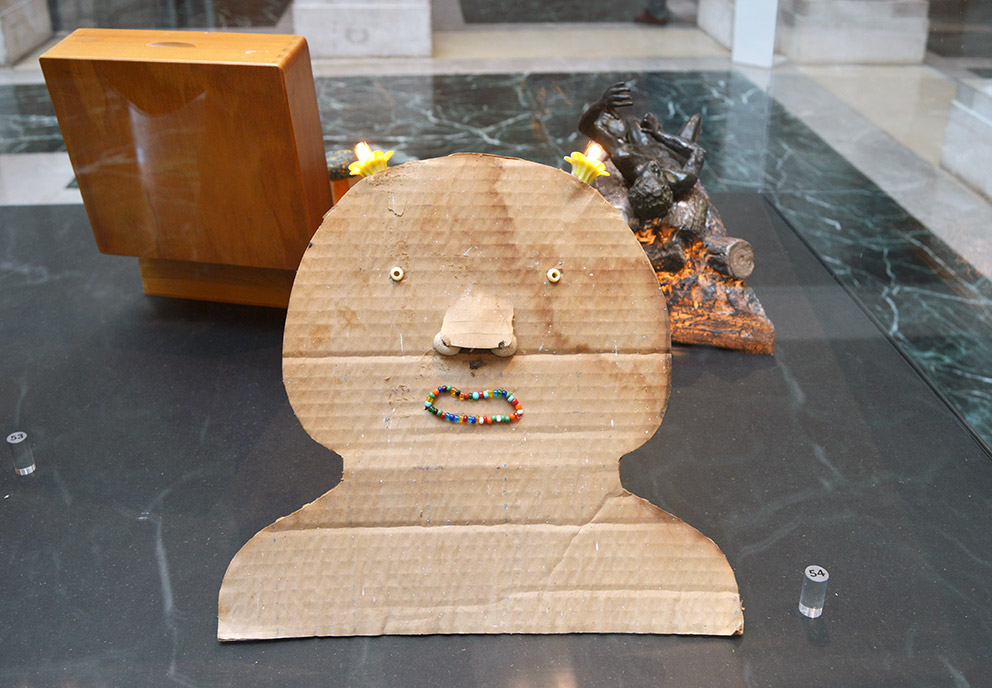