X-ray vision for the office

The "WORK.CULTURE.MAP" by König + Neurath helps architects answer the question: Does my office planning match the client’s workplace culture?
by Fabian Peters | 9/23/2020

"Office planning cannot be based solely on hard facts." Georg Frech knows what he’s talking about. For more than a decade now, the graduate in business administration has been working at König + Neurath, a supplier of office furniture and spatial systems, where he heads up the in-house K+N Academy. Added to which, he has also played a leading role in the development of the "WORK.CULTURE.MAP", an internet-based application designed to help adapt office spaces optimally to the workplace culture of a company. Not only for the companies themselves, but also for architects dealing with office planning, the analysis tool provides valuable data and results on which the design process can be based. While architects have thus far relied solely on their own observations, experiences and appraisals of the customer in the organization of office spaces, the "WORK.CULTURE.MAP" now enables them to apply a structured process to identify the preferences and needs the planned office must conform to –solid arguments why architects should prompt their clients to undertake an analysis like this in order to discover their own work culture.

The "WORK.CULTURE.MAP" can be broken down into several sections: In the first step, the employees can take part in a questionnaire and evaluation process by means of an online tool, which poses questions about their habits and behaviors in their day-to-day work using intuitively understood pictograms. This analysis is broken down into seven areas, or "seven dimensions" as König + Neurath calls them. They describe the corporate culture in relation to points such as management style, creativity and agility, and pinpoint the current situation by means of a points system on a scale between classic office work and New Work. Building on these findings, König + Neurath offers another step, during which workshops with employees address the ideal working environment for the requirements and needs of the company. Based on the seven dimensions, the participants each formulate six hypotheses – building on the results of the first test. In conclusion, they themselves evaluate whether and to what extent each hypothesis applies to the company. "The result often clearly reveals the gaps between desires and reality," explains Georg Frech, who moderates these processes. "And that is precisely the intention. It’s also about a process of self-identification." One of the advantages of the "WORK.CULTURE.MAP" is that it gets rid of the explosive nature of these kinds of discussion processes thanks to sensitive moderation. "There are no immediate arguments about the location of every coffee cup," says Georg Frech, adding: "What’s more, regardless of how the process turns out, everybody can still look each other in the eye at the end of it." Organizations that embark on such a process are generally already well prepared. "When the acceptance among participants has been achieved, then there is often a tremendous dynamism and unforeseen creativity," Georg Frech has observed.

As soon as the results of the workshop have been evaluated, a team of interior designers translates the results into a draft plan. "In normal cases we provide two proposals," explains Frech, "one that’s more progressive and one that’s more conservative. After all, the aim here is to bring all those involved on board with the process and take them along with it." As early as this stage, König + Neurath offers an opportunity to involve the client’s architect in the implementation process. Hence, from the outset the concept evolves "from a single source", in which the architecture firm can translate the results of the "WORK.CULTURE.MAP" directly into its own design language. Furthermore, this way the client’s individual design preferences can flow into the plans, for example consideration of a corporate design or specific corporate colors. Incidentally, the results achieved through the analysis process can be thoroughly surprising for all those involved. Frech illustrates this with an example from his own company: "When we used the ‘WORK.CULTURE.MAP’ to moderate a change process in our own departments, it became clear that the workplace satisfaction among the managers was high, but among other employees it was pretty low." This was because the managers had their own individual offices by the windows, while the rest of the department was in a darker space behind them and was also positioned next to a thoroughfare. Georg Frech and his colleagues suggested repositioning the managers’ offices to glazed cubes and shifting them away from the windows. The employees’ workstations were then to be positioned by the windows in order to shield them from the disturbance of the thoroughfare by means of the sound-insulated glass cubes. It quickly became apparent that all those involved were willing to take this step. The reorganization of the office and the surrendering of privileges made it possible to achieve a notable gain in workplace satisfaction.

A foundation for architects

Frech stresses that the “WORK.CULTURE.MAP” was not designed exclusively as a consultancy tool for König + Neurath products but rather as a service to be offered and charged for independently. “We also offer the option of creating a specification of services for a tender process on the basis of our analysis,” he says. Most importantly though, the system offers the ideal prerequisite for architects or interior designers wanting to advance the concept created. The architect can use the results of the analysis from the “WORK.CULTURE.MAP” as a basis for the design of interior spaces that must be tailored optimally in terms of both their design and functionality to the relevant client. The look that users envision for their new office is also something that can be identified with the help of the “WORK.CULTURE.MAP”: By means of an online test, preferences and style ideas are pinpointed and evaluated. “We call it ‘style tinder’,” jokes Frech. Those questioned are shown images from the fields of fashion, architecture and design, which represent specific style directions. As with the dating app, users can “swipe” to the right or the left to decide whether the image they are shown appeals to them or not. From the relevant preferences, the system then draws conclusions about which of the four König + Neurath “style worlds” best corresponds to the person’s individual taste. 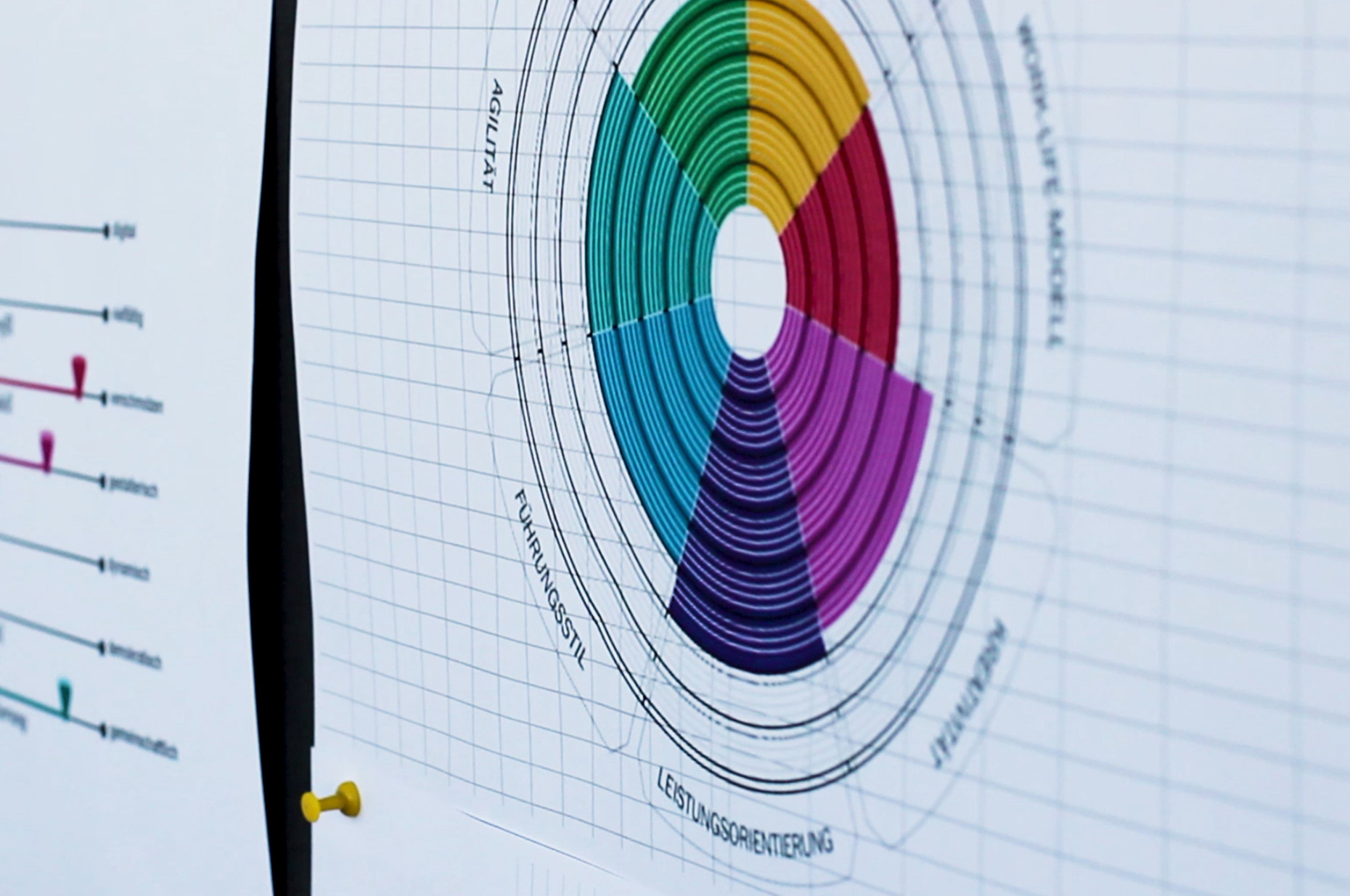 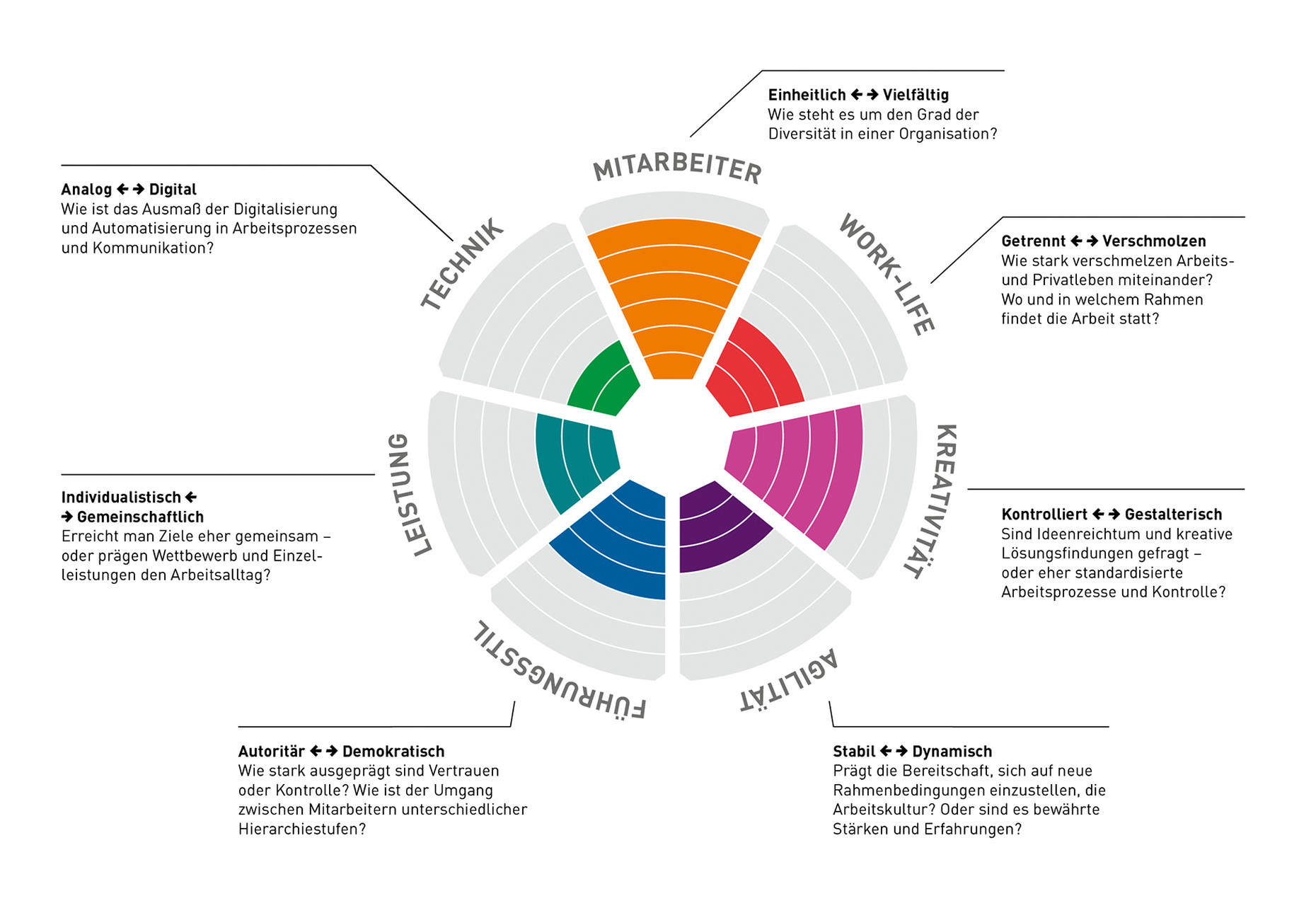 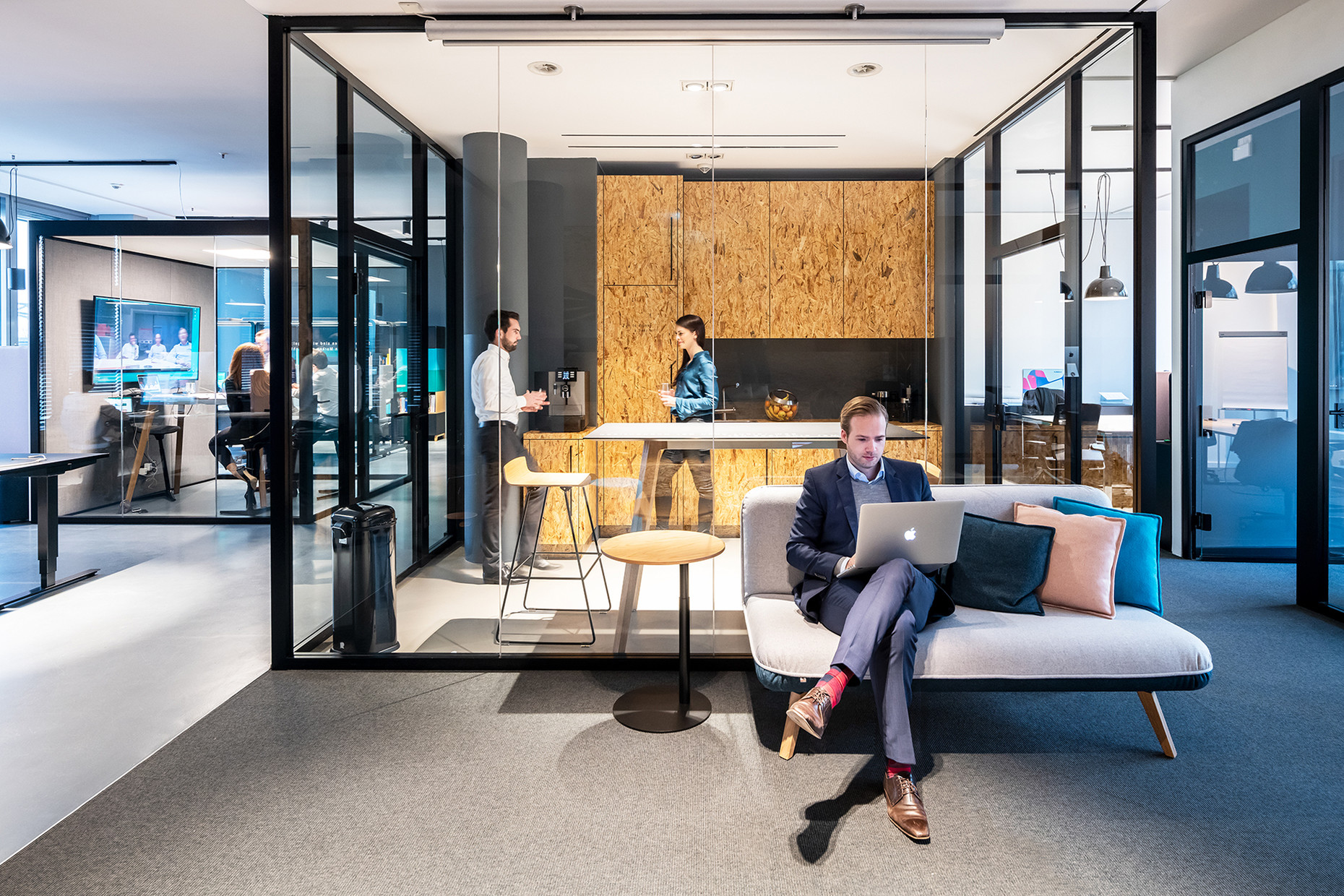 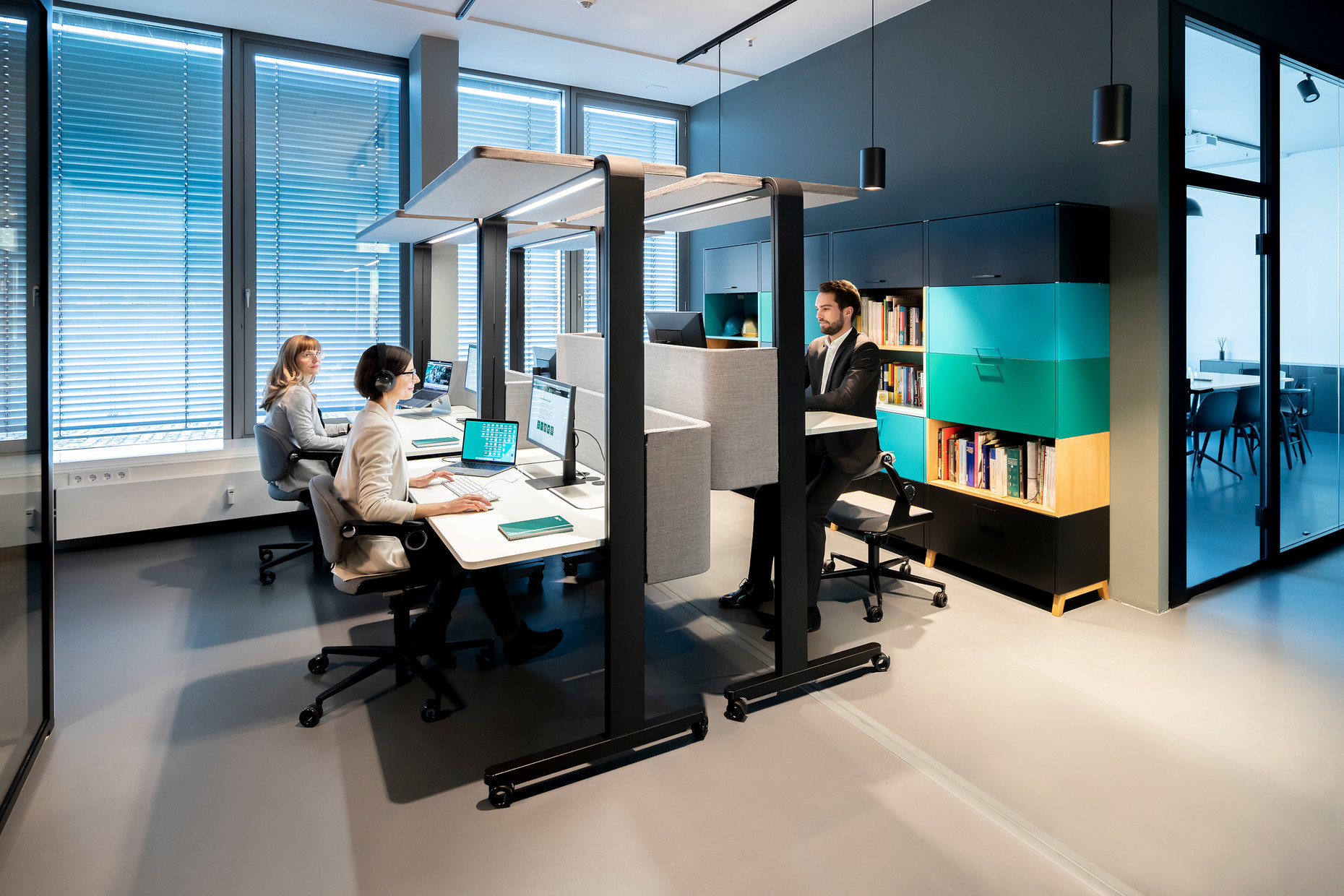 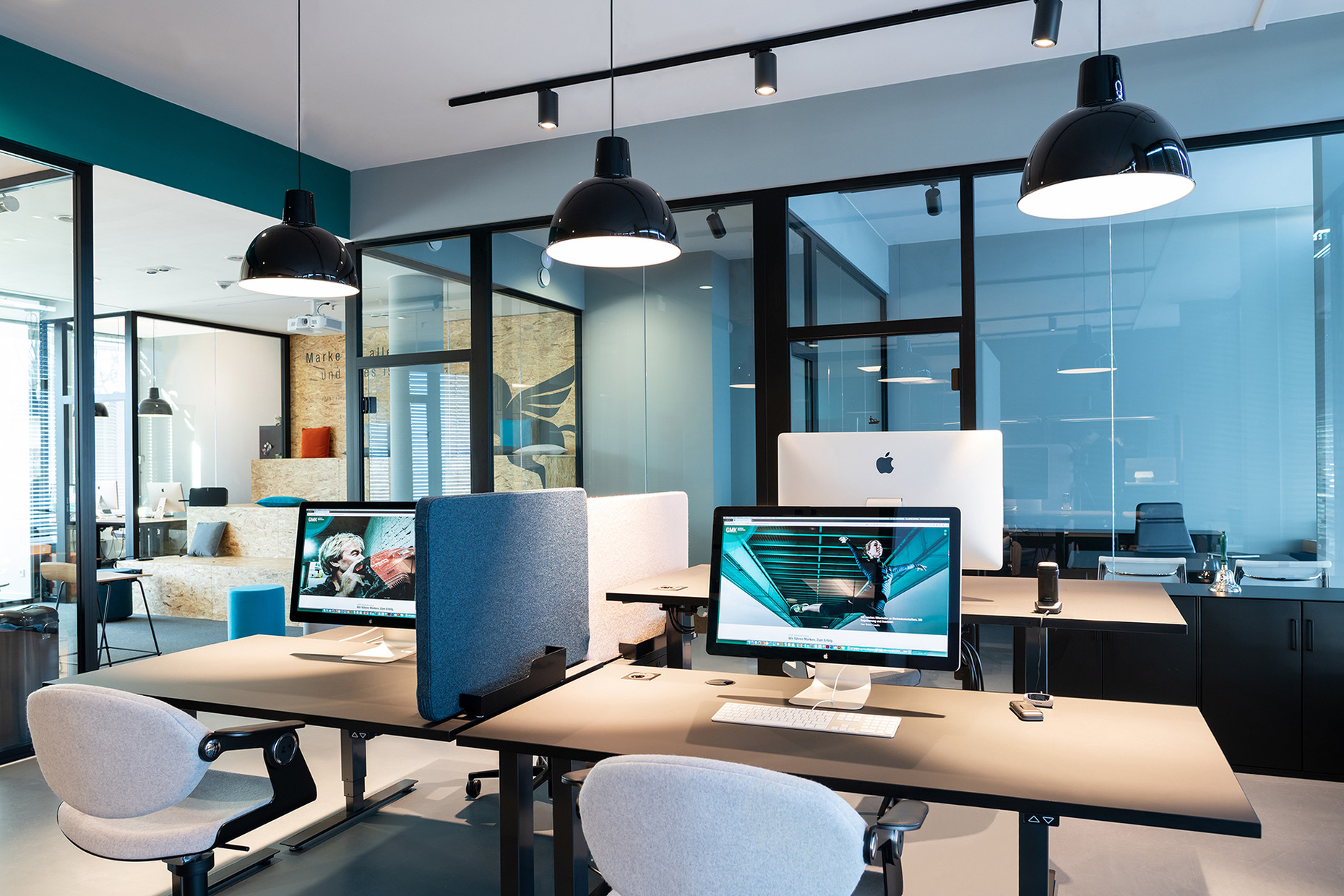 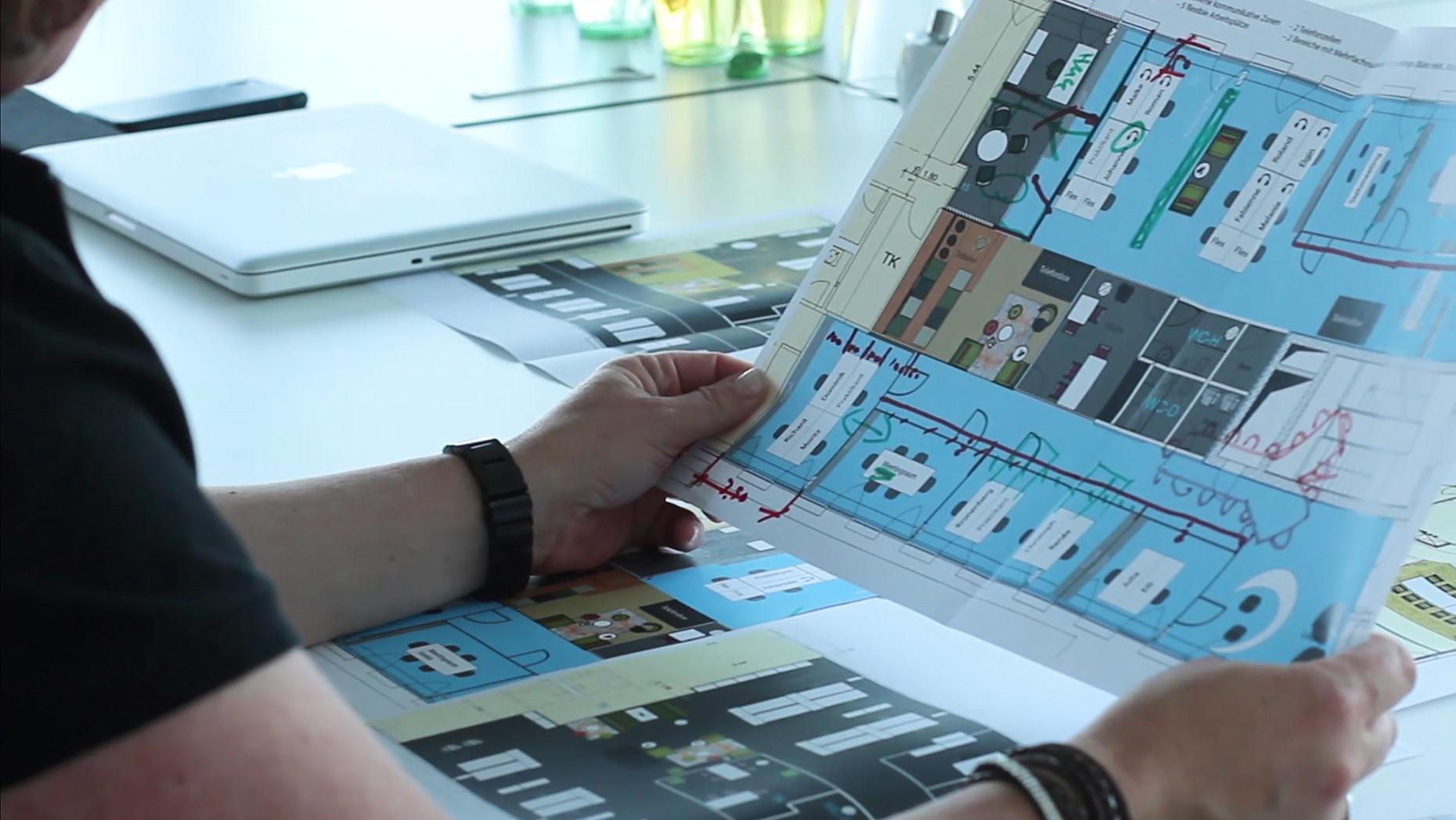 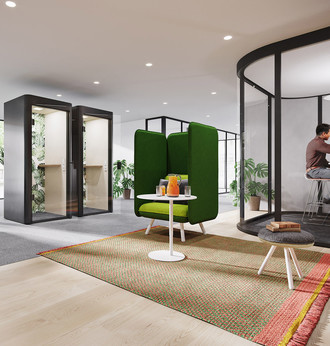 Extra spaces made to measure

There is a need for private enclaves in large open-plan offices – a place where you can make phone calls, confer, or just to work without any distractions. The room-in-room systems by König + Neurath create space for such activities and much more besides.
Advertisement