100 years after the publication of the Futurist Manifesto in the Parisian daily "Le Figaro", Italy is celebrating Futurism with a long series of exhibitions. Filippo Tommaso Marinetti, who founded the movement, actually expected the subsequent generation to brush him and his followers aside, acting no less mercilessly to the past than he had himself. However, the abhorred institutions of the museum and library have ensured their survival against Marinetti's will and also safeguarded the treasures of Futurism, which they are now putting on show.
It becomes clear here that the vitality of Futurism has manifested itself less in paintings and drawings and more in a particularly Futurist mode of behavior, namely, an aggressive all-out attack on the entire culture which has been passed down through the generations and is considered senile. Marinetti even called for the old palazzi in Venice to be demolished and the stinking canals filled with the rubble.

Marinetti was a media genius and already famous in Russia before traveling to Moscow in 1914. The exhibition "Illuminations" at the MART in Rovereto shows just how close the relationships between avant-garde artists were at the beginning of the 20th century and how quickly new ideas circulated between Berlin, Paris, Moscow and Rome. The Italian Futurists were intoxicated with speed and the sound of engines. Around 1913, Giacomo Balla found the visual means to express this, namely a dynamic series of bright areas and intersecting lines. His painting "Abstract Speed" is one of the first abstract pictures in Italian art.

Balla's formal will soon encompassed all areas. His home in Rome, which is still waiting to be restored and opened to the public, is a complete artwork. All the rooms, from the wall paintings to the flooring, the tiles in the bathroom, the kitchen furniture, lamps, tables and chairs are styled in line with Futurism. He even named his two daughters after Futurist elements: Luce (light) and Elica (propeller). He told them what clothes they were allowed or not allowed to wear. There were to be no neutral or pleasant colors, stripes or small checks. In 1915, the Futurists celebrated Italy's entry into the War and wore "anti-neutral suits" in the national colors to mark the occasion.

Balla designed clothes from pieces of fabric that had been put together irregularly, bold vests with rhomboid patterns and a pullover called "Modello Futurfascista". Today, some originals and draft sketches are kept in the corporate archives of Italian fashion companies like Missoni and Biagiotti. The Biagiotti Cigna Foundation owns a collection of 200 of Balla's Futurist paintings and objects, and Lavinia Biagiotti, the daughter of the company founder, even took the risky step of reinterpreting Futurist fashion: "Balla's designs", she says, "are fantastic. His clothes guarantee freedom of movement, are casual and fun."

There is only one art

No Futurist would have asked himself whether design belongs to art. There was no division of art and craftwork, high and popular culture. Whether fashion, textiles, furniture, painting, wallpaper patterns, cutlery, theater costumes, applied art, ceramics or books, the Futuristic furor stopped at nothing. Giacomo Balla furnished the first Roman nightclub, the "Bal Tic Tac", took the step into mass production and designed tiles and futuristic wrought-iron luminaires, among other things, for various companies.

In a certain way futuristic food design even anticipated the meticulous cooking style of Ferran Adrià. A fan wafted the aroma appropriate to the menu through the room. "Chicken Fiat" featured on the menu approved by Marinetti. The chicken was roasted with ball bearings inside and garnished with cream. The Futurists also tried, unsuccessfully, to get rid of pasta, because they suspected it of making Italians lethargic.

The reconstruction of the universe

Thus they planned no less than the "reconstruction of the universe". A visionary architect was available for this job, namely Antonio Sant'Elia, who, although he never built anything, left behind an ingenious collection of drawings. He designed cityscapes with terraced skyscrapers, roofed walkways and different levels of traffic. His drawings influenced many architects of the Modern Age in the 1920s, such as Le Corbusier. In 1910 Sant'Elia joined the Futurists, volunteered for active service and fell at the age of just 28. "It is not about inventing new forms for window and doorframes", he had written. "Each generation will have to build its own city!" An idea that makes us history-obsessed descendants shudder.

Sant'Elia succeeded in breaking away from the influences of Art Nouveau while the theatrical flamboyance of his fellow-Futurists celebrated triumphs above all in resort towns like Montecatini and Salsomaggiore. The Modern Age in architecture could have begun with Sant'Elia, however, the fascist dictatorship soon took control. The feudal-bourgeois society continued cultivating the "Stile Liberty" as the general mood for a long time, but the floral motifs with an Oriental touch in the living rooms of wealthy Italians horrified the Futurists. They did away with all embellishment long before the Bauhaus.

The future belongs to advertising

The studio belonging to the Futurist Fortunato Depero in Rovereto was the laboratory of a seminal product design. It has now been converted into a museum and is open to the public as the "House of Futurist Art". Depero's artistic legacy touches on all areas, from painting to photography and from arts and crafts to book design. Depero was way ahead of his time and made astounding statements such as, "the art of advertising is the art of the future. This art will no longer be hidden away in museums, but on show everywhere." Depero worked on a long-term basis with major companies like the mineral water supplier San Pellegrino and the drinks manufacturer Campari. The small, conical Campari Soda bottle Depero designed is still on the market today. Depero spent two years working in New York, where he designed numerous cover pages for "Vanity Fair" and "Vogue" between 1929 and 1930. Back in Italy, he gave corporate identities to a wide range of companies in Trento. Depero designed tables and chairs, built towers several meters in height in the form of upper-case letters, designed books, such as "Libro Imbullonato", which is held together by two metal screws and corresponding nuts, and, with his bizarre puppets made from geometric shapes, created the forebears of Lego and Playmobil figures.

Futurism left numerous marks on Italian design. We find them in Giò Ponti's futuristic espresso machine for Pavoni of 1949, later on in the colorful and ironic creations of Ettore Sottsass and Bruno Munari, in the provoking designs of Joe Colombo and Alessandro Mendini, and indeed, even in the bizarre basic commodities produced by the design factory Alessi. In 1971, the Italian furniture producer Dino Gavina (1922 - 2007) reproduced some of Giacomo Balla's designs in a small series, which included a screen, metal "futuristic flowers" that can be dismantled and the steel relief measuring one meter by one meter, "Abstract Speed + Sound", with which Balla anticipated Russian Constructivism in 1913.
Naturally we can no longer rave about the "explosive breath" of a car racing past today. We are done with speed for the time being. But a couple of new Futurist challenges might not be such a bad idea.

Ute Diehl writes for the Frankfurter Allgemeine Zeitung and for the art magazin. She lives in Umbria, Italy. 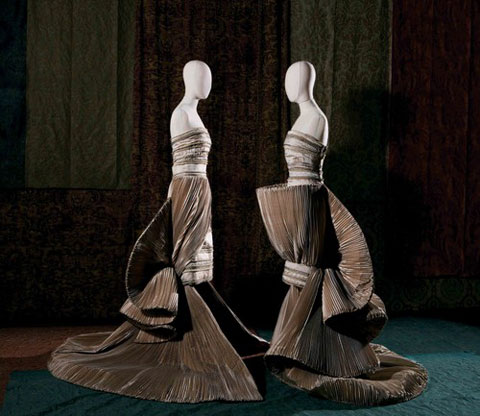 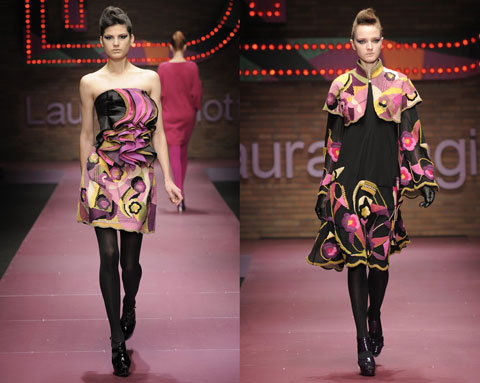 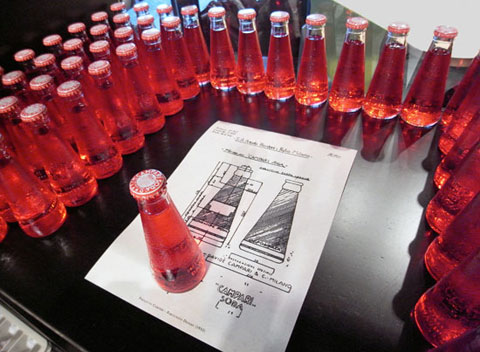 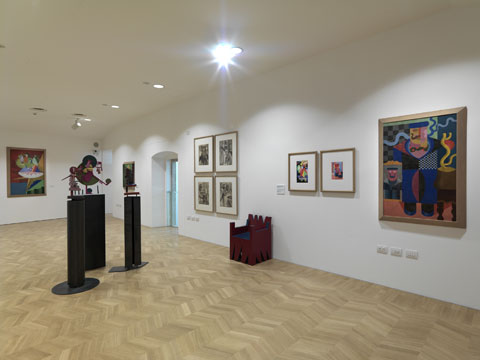 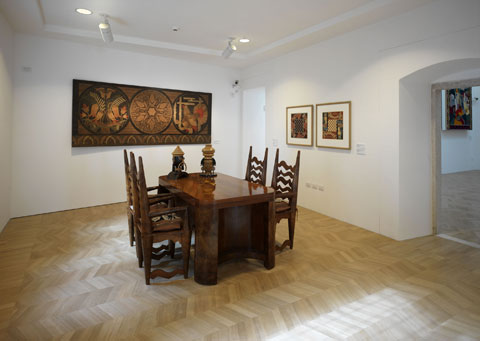 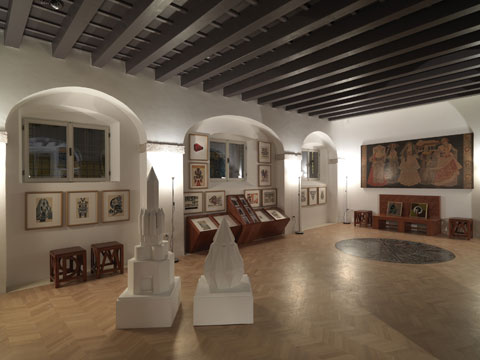 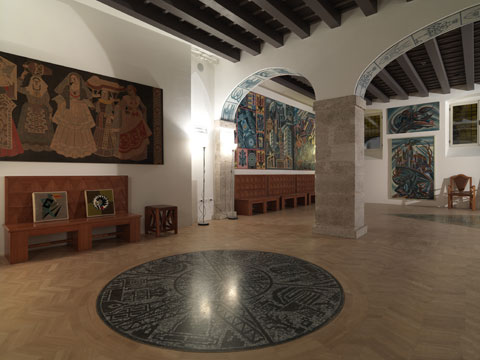 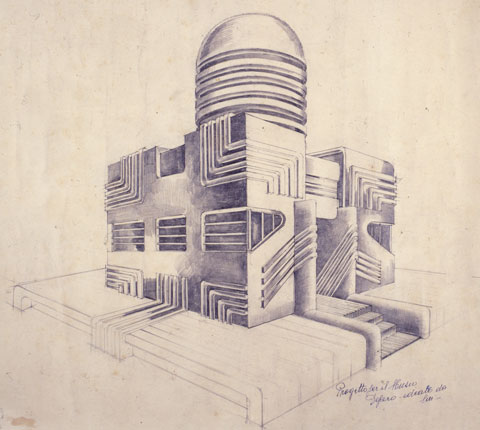 Drawing for a museum by Depero 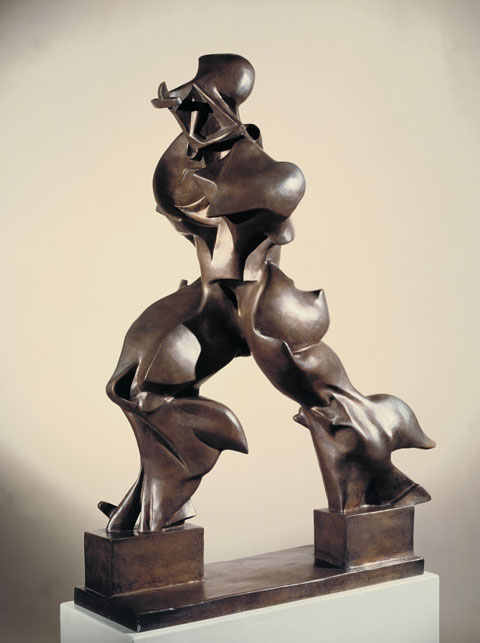 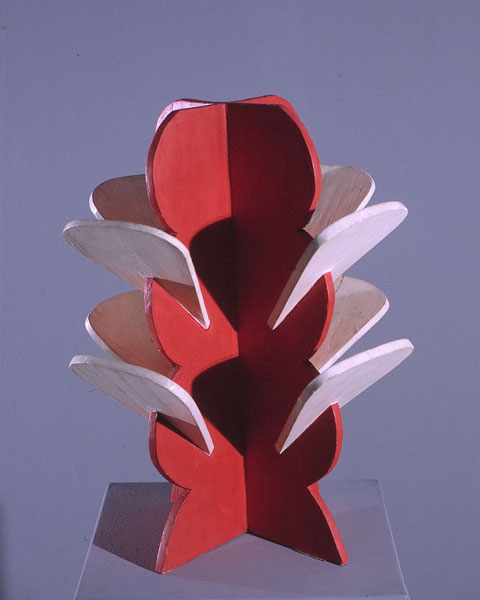 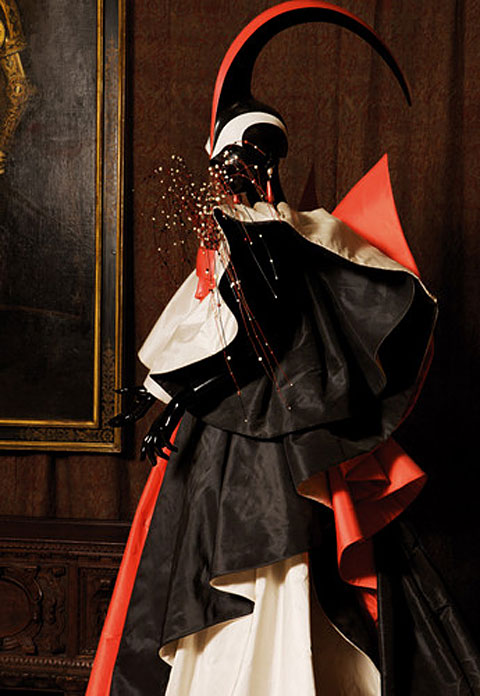 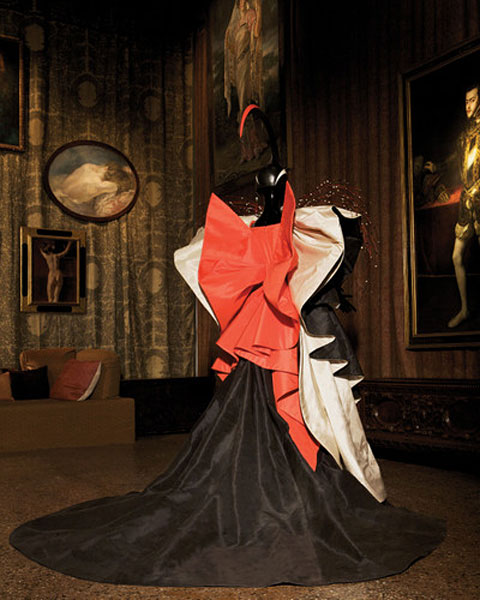 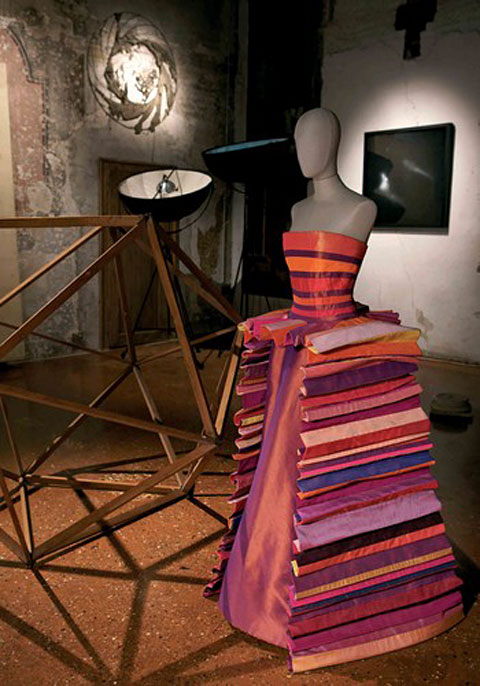 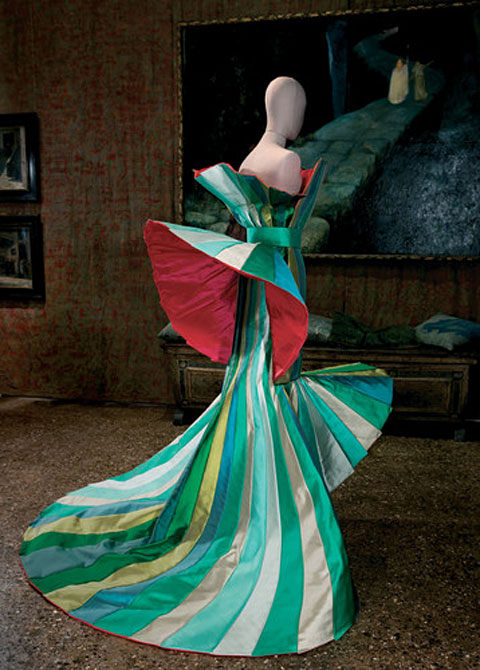 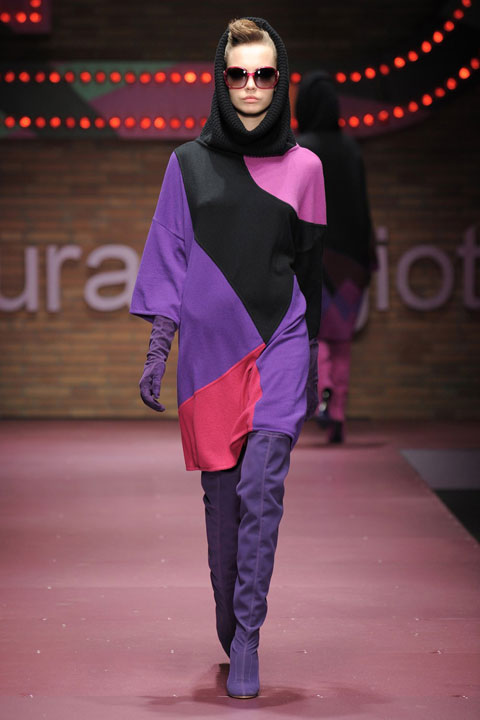 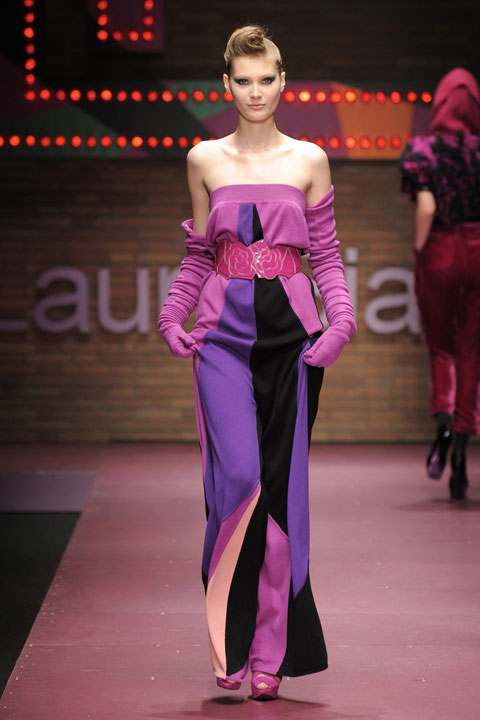 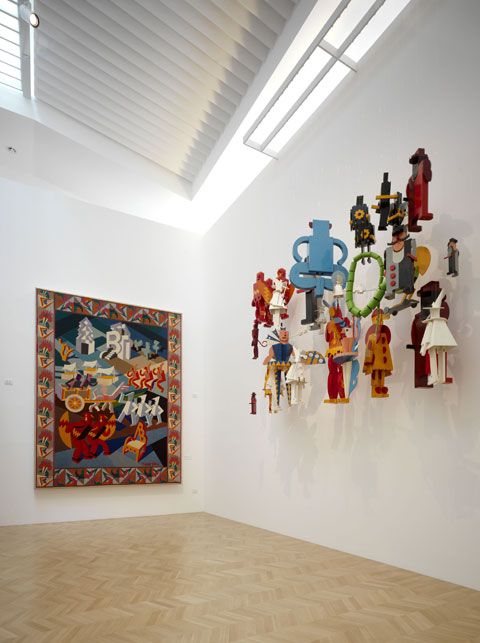 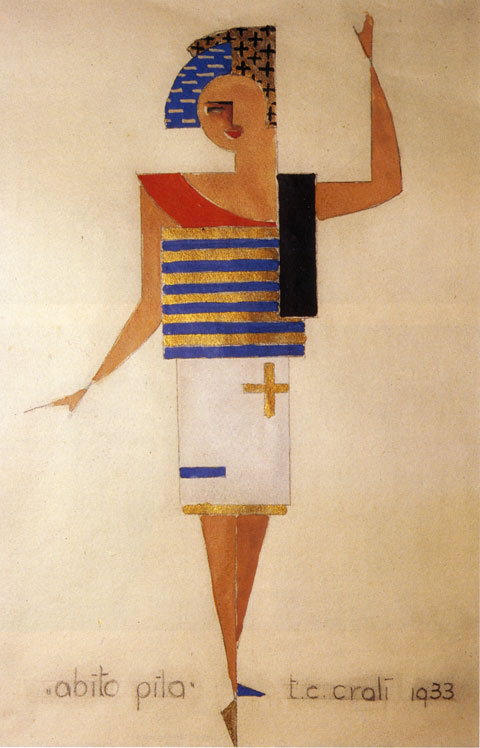 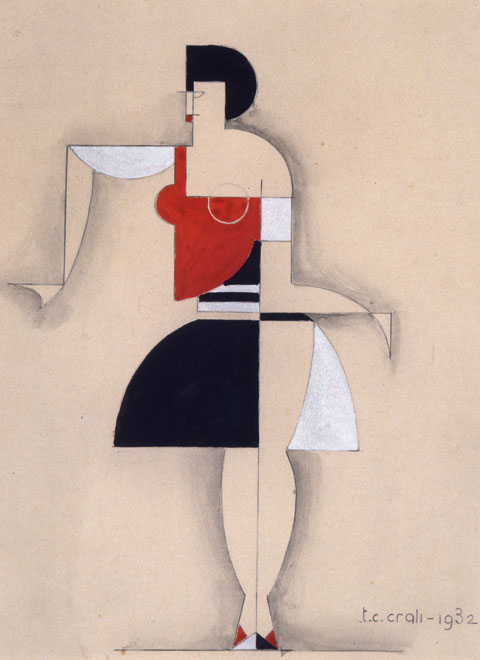 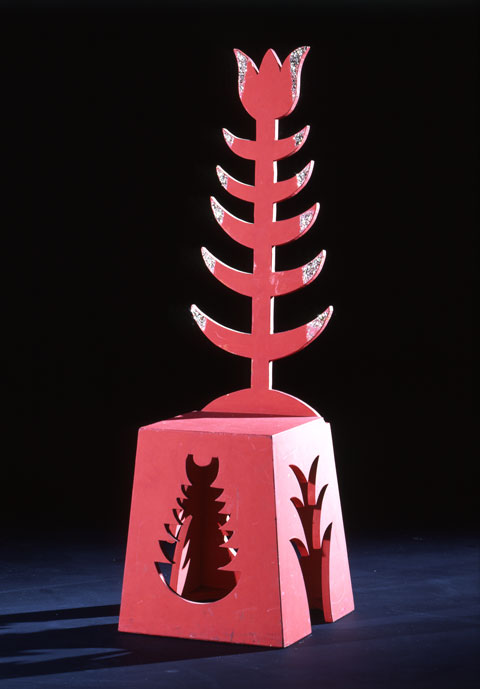