top
You need the right opportunities to create the new
Interview with TOBIA SCARPA
Jan 24, 2014 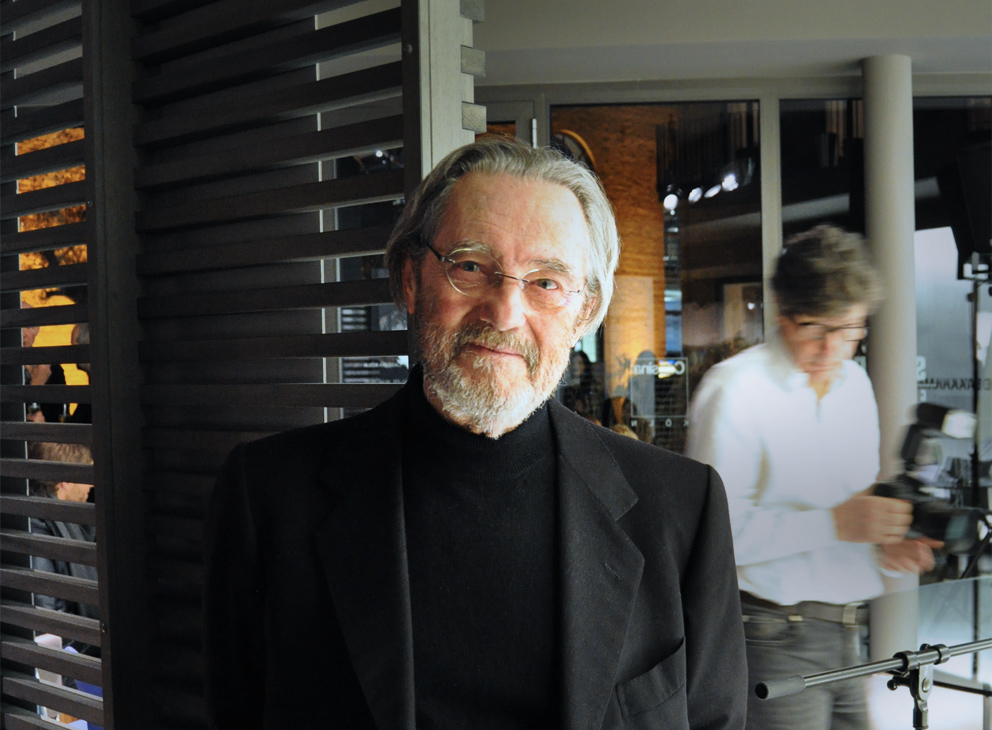 Historical moment: Tobia Scarpa at the presentation of the Simon-collezione at the Cassina-showroom in Cologne. Photo © Martina Metzner, Stylepark
Thomas Edelmann: Your oeuvre, architecture and design, was everywhere a decade ago. Today, in the digital age, all one finds in the Internet are traces, often among vintage furniture dealers and auction houses. An example of the current digital amnesia?

Tobia Scarpa: Architectural works and those of literature need time to pass before they are understood, quite apart from any swift success they may have. Which is why I am often very happy with my work. But it doesn't mean I can lay claim to anything. My experience in life could also be termed intolerable arrogance. Now I wouldn't have said that 50 years ago, when I was this side of 30 and thought I could do anything. You need a little modesty: What I did worked. The things were successful. 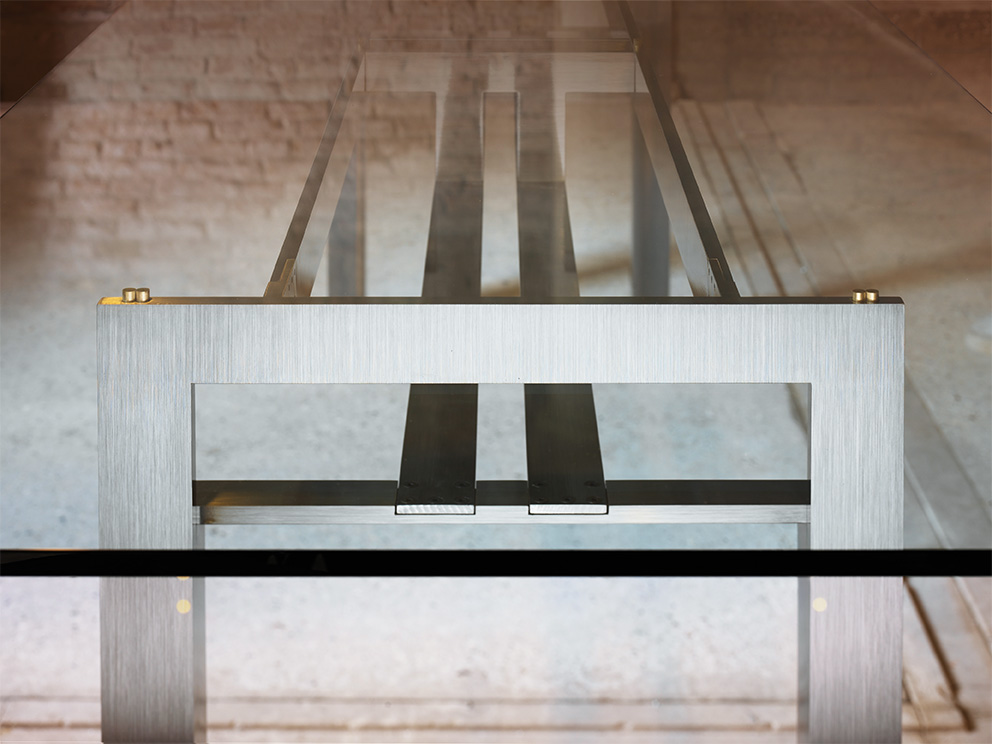 Son and his father: Tobia Scarpa (left) and Carlo Scarpa (right). Photo © Cassina SimonCollezione
From today's viewpoint, many were pioneering…

Scarpa: Well, that's easy if the things didn't exist before. If the opportunity arises you must change what exists, alter the tradition. Perhaps technology will in future offer other opportunities. I'm thinking of energy, for example. Our society cannot be rejuvenated if it doesn't succeed in finding a new source of energy. That's the precondition for change.

Why is that so complicated today?

Scarpa: When we started working, it was in the post-War world, it was easy to create new things. You only had to have an idea, correct it, focus on uses and the technical ways of realizing it. Okay, you needed a few skills, such as knowing how to sell and market a project. But then everything worked, simply because the product did not exist before. By contrast, today it's very difficult to make something new. Back then, we already referred to the ideas of the grand masters such as Le Corbusier or Gunnar Asplund, as they had set the right shape in stone. What was still lacking could simply be added.

A while back you said "what other than architecture should I have done?"

Scarpa: Yes, of course. At birth, my father Carlo Scarpa took me on his arm and never let go. When I was in primary school we played 'who can draw with a pencil stub'. We're both left-handers. I went with my father to building sites where in the course of time I learned to grasp architectural problems intuitively. Compared to how you learn the profession today, I'm a bit like an old mason who's read a lot of books and therefore pretends to be an intellectual. 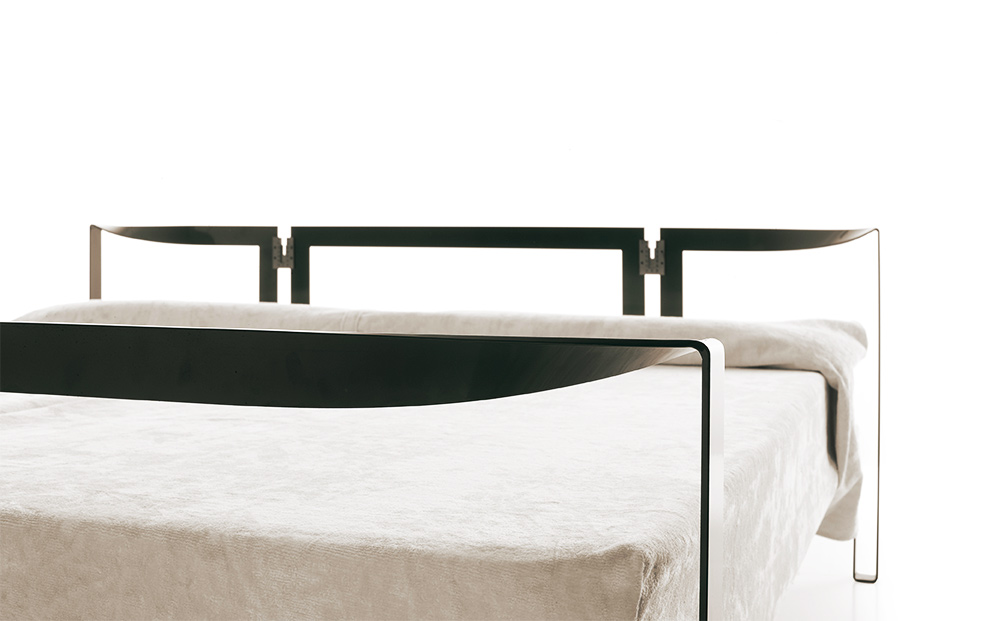 Bed “Vanessa” by Tobia Scarpa, year of production: 1959/2005. Photo © Cassina SimonCollezione
Today, the "Simon" collection, that has belonged to Cassina since last year, has just been relaunched. Can you remember the early days?

Scarpa: It started back in the 1960s. I had designed the "Pigreco" chair hat went on show at the XII. Milan Triennale. And brought be into contact with the world of Italian and international design. I got to know Giacomo and Achille Castiglioni, for example, and Dino Gavina, too. He invited me to visit him and asked me to create a sofa for him. My father tweaked my design, but we then reverted to the original which later sold under the name "Bastiano".

What does seeing this collection again in a new context mean to you?

Scarpa: All his life, my father dreamed of his work being duly recognized. His works and the entire "Simon" collection can now be enjoyed by a new audience. His oeuvre must be kept alive. Dino Gavina was an outstanding man, a man with links to artists, architects, and designers. He took wise decisions with his program. But he was not so good when it came to running a company. I hope the objects spark enthusiasm again. They still seem very fresh and high-grade. Young people notice that. They cost a bit, invariably. If my father's oeuvre is important to a company such as Cassina and the Poltrona Frau Group, then culture must also be involved. What Dino Gavina and Cesare Cassina developed as of the 1960s is a firm part of Italian furniture design. Some historical products are now back on the market. They come and go. They are vibrant because of the originals' freshness and honesty.

Scarpa: You need the right opportunities to create something new. Opportunities for new proposals for a market changed from what we view it as today. At present there's a strong social class seeking self-representation. That contradicts the principles of design, the soul of the "progettazione industrial", the development of projects and products that at times possess a challenging quality. Instead, the emphasis is on fashion, on self-presentation. One needs think only of Louis Vuitton bags. I don't know what things are like in Germany, but in Italy there isn't a woman who doesn't want to own one of those bags. Irrespective of whether it's a real one or a fake. Originality doesn't place a role any longer. That's a threat to original objects and ideas, which need a space where you can identify with them and concern yourself with them.

Scarpa: I worked with Afra as of my student days. By contrast, I never worked together with my father, I helped him and worked for him. Some of his architectural projects include things I planned. But I don't see why I should say: "No, I did that." It's important to ask what contribution each individual made. Talking with my wife was crucial as regards advancing a project. Her answers expanded the basis of the project; this was a matter sometimes of a conversation, other times of a drawing. Dialog was very enriching for both of us. I thank God whenever a project doesn't get rejected, but a change is requested. That kindles my interest. Often precisely those elements of a design which one had initially not rated so highly become especially complex when revisited. If they can be harmoniously combined, then the poetic expression of the overall piece becomes all the greater and deeper. But I don't know that at the outset. I need to be challenged by others first. Designing is itself more of a gesture, the thought of a moment more than rational consideration. In this context, everyday work, giving the idea flesh and bones is by no means trivial. This rationally structures the idea. And what can't be rationally structured is the unknown. For example, when you draw something. Using a pencil you can create an ugly or a beautiful character. The difference between the two elements is that the latter will keep you happy for at least half a day.

Table “Delfi” by Marcel Breuer and Carlo Scarpa, year of production: 1969 (2009 an “improved” version by Tobia Scarpa). Photo © Cassina SimonCollezione
You spoke of the problems of developing new projects today, of finding the opportunity for something new. Do you follow current trends in detail?

Scarpa: No, I'm not really that interested in what other people do. I don't read magazines. I might copy something inadvertently because I didn't even know that it's a copy. Now that can happen. Do you know how to make mayonnaise? If you don't add the ingredients slowly, the emulsion goes sour. I think that today's world is divided into huge strata of mayonnaise. After the World War II there were few visible differences between the social strata. There were equal opportunities to obtain products. You simply went to a store. Perhaps school used to be a bit more serious, at least in Italy. Today, training is a more diverse matter, there are all sorts of media and information channels. You can understand in many different ways what values reign in society. But those values no longer get interpreted culturally.

What impact did that have?

Scarpa: Design arose when people migrated from the country to the towns. It was an age of radical economic change. People no longer thought just of themselves, but also of the others. People wondered why they should still eat with an old spoon? We'll make a nice new spoon instead. Which gave rise to Bauhaus, to guidelines for design. The sense behind this doctrine has been forgotten over time. I'm against seeing design as fashion, but I understand that it can be a useful tool. Correcting a designer society such as ours is as good as impossible. Which shouldn't prevent us from doing the right things. It's just difficult to realize that with your own bit of mayonnaise.

Italian design is characterized by currents and groups. You never participated in such movements. Why not?

Scarpa: No, never ever. I excluded myself. I'm a free agent.

What projects have you realized of late?

Scarpa: The ribbon was cut on my latest piece in Venice a couple of days ago: The restoration of Galerie dell'Accademia, after 14 years! It was a government contract and the red tape greatly slowed things down. My contract covered not only redesigning the interior, but also the design objects, such as new lights for the paintings. Which is hard to grasp, as these things may be simple, but took me a long time. I wanted daylight in the museum and chose parallel spots, coherent lamps with a narrow angle of reflection. No one will understand this, but you can now see brushstrokes on the paintings that are 500 years old but look as though they've just been painted. I used conventional lamps, not LEDs. They don't use much energy, but have a limited lifespan. And LEDs don't yet offer you the right solution to address this current issue in design. I simply did my job as an architect. Developed new flooring to avoid any chromatic reflection. Maybe these are small, insignificant aspects. But I found it important that such things are done well. 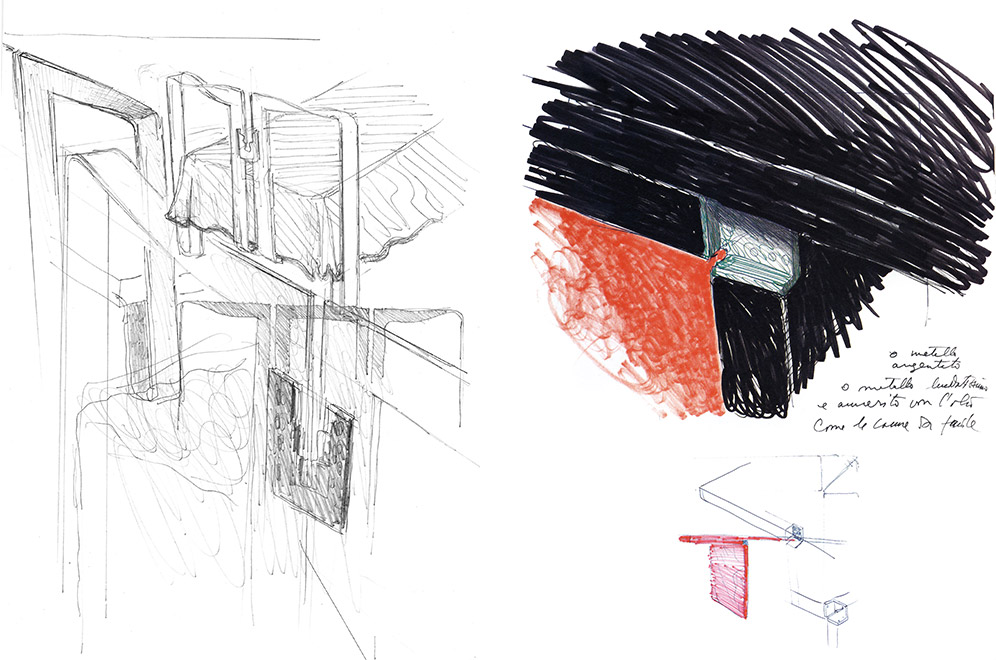 Left: Sketch of the bed „Vanessa“ by Tobia Scarpa. Photo © Studio Tobia Scarpa
Right: Sketch of the Table „Orseolo“ by Carlo Scarpa. Photo © Studio Tobia Scarpa
Tobia Scarpa, born in 1935, is an architect and designer. At the presentation in Cassina’s Cologne showroom von Cassina he insisted on not being addressed by title or function. His father Carlo Scarpa (1906–1978) persuaded him to become an architect. While still a student in Venice, Tobia Scarpa worked with Afra Bianchin Scarpa (1937–2011). For decades the two were a successful design and architectural team. Cassina brought out the first Afra and Tobia Scarpa designs as long ago as 1965.

Dino Gavina (1922–2007 ) founded the company Gavina SpA in 1960. He made contact with Marcel Breuer, whose early tubular steel furniture Gavina re-launched post-1945, thus establishing the practice of re-editions. In financial difficulties, Gavina was forced to sell the company in 1967 to Knoll International, and one year later joined Maria Simoncini (died 2010) in founding Simon International and with it the concept of furniture editions. Carlo Scarpa and Kazuhide Takahama (born 1930) formed the company’s core design team. Yet Tobia Scarpa, Marcel Breuer, Man Ray and Meret Oppenheim not to mention Gavina himself contributed to the Simon Collezione. It was acquired by Cassina effective June 2013. 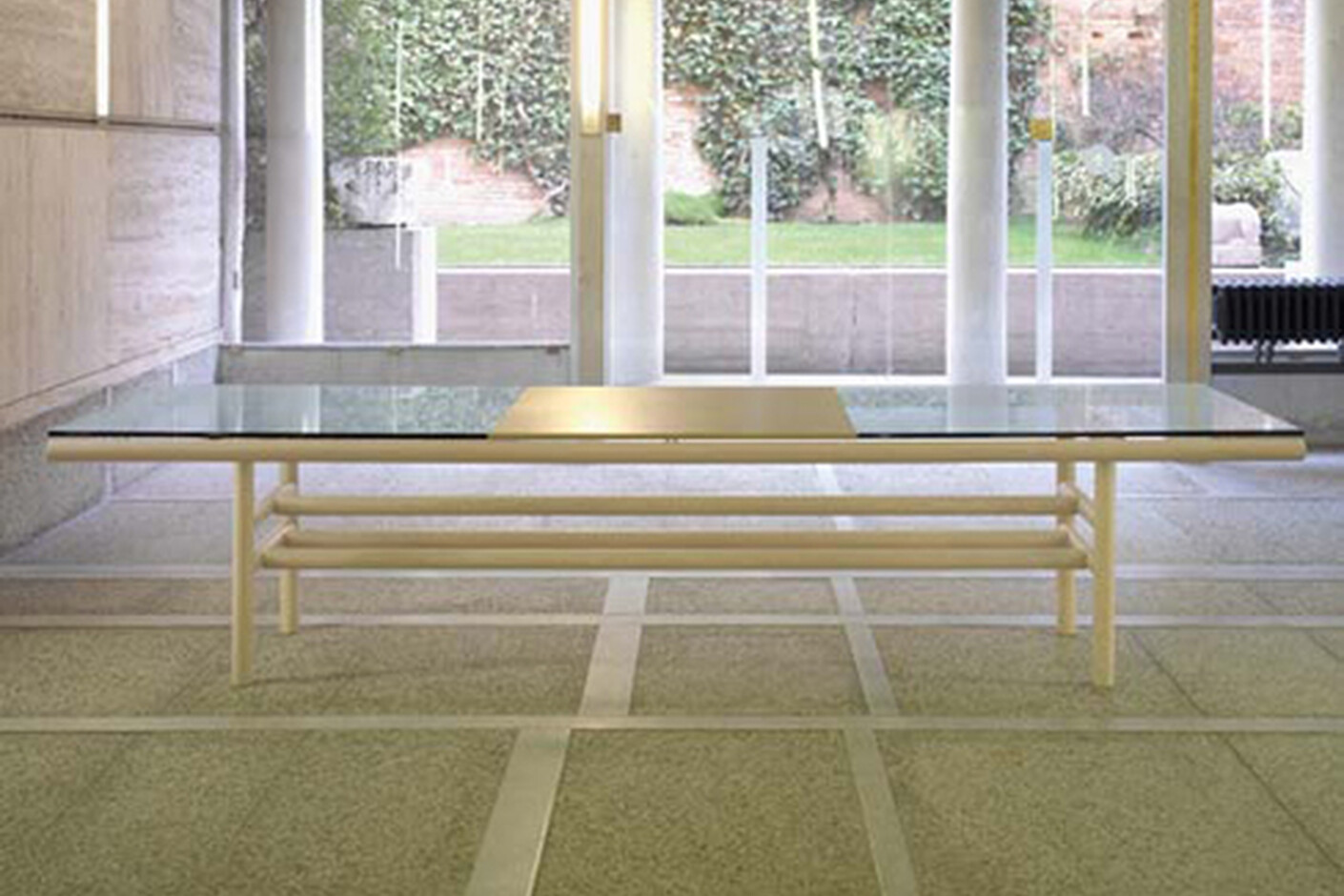 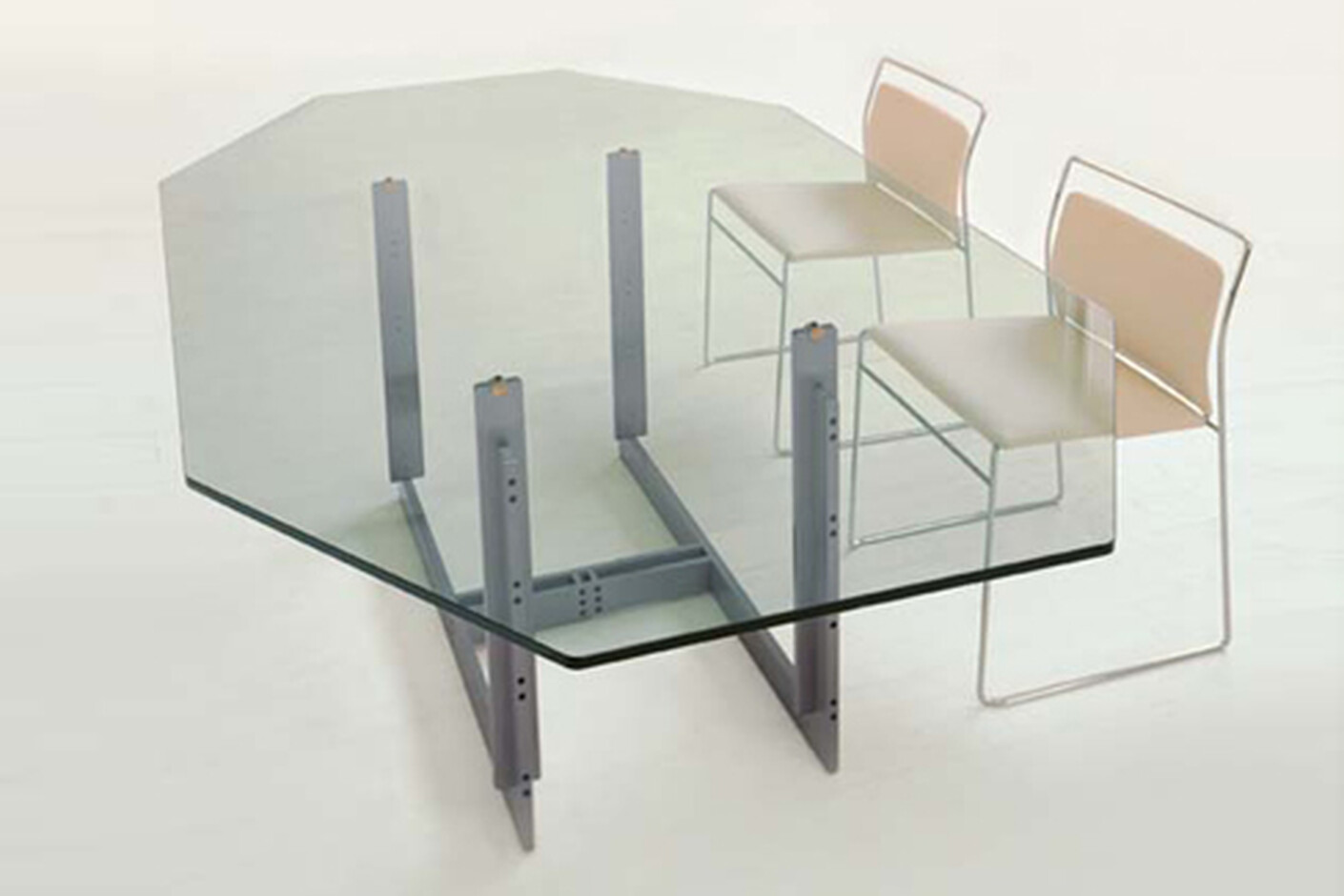 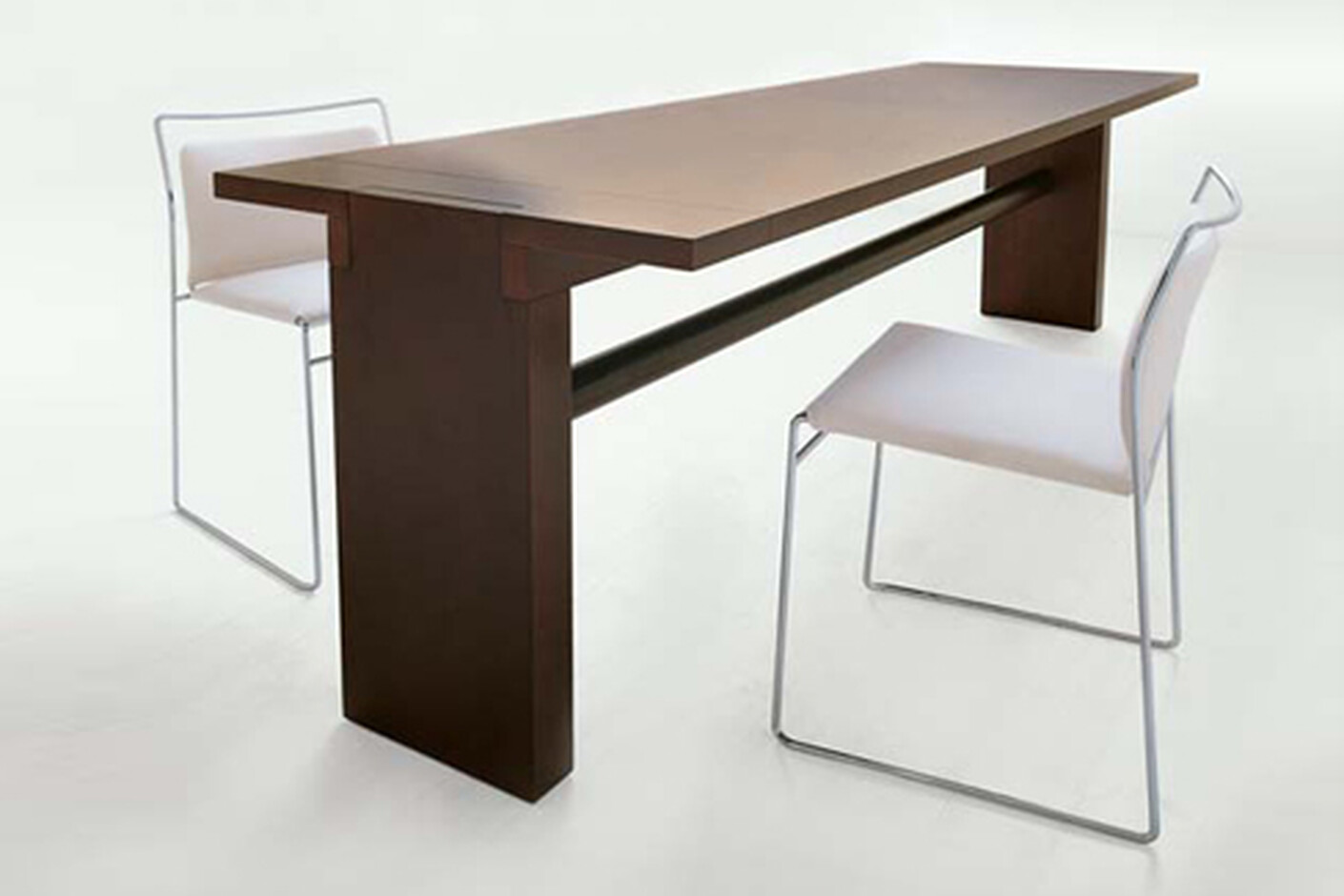 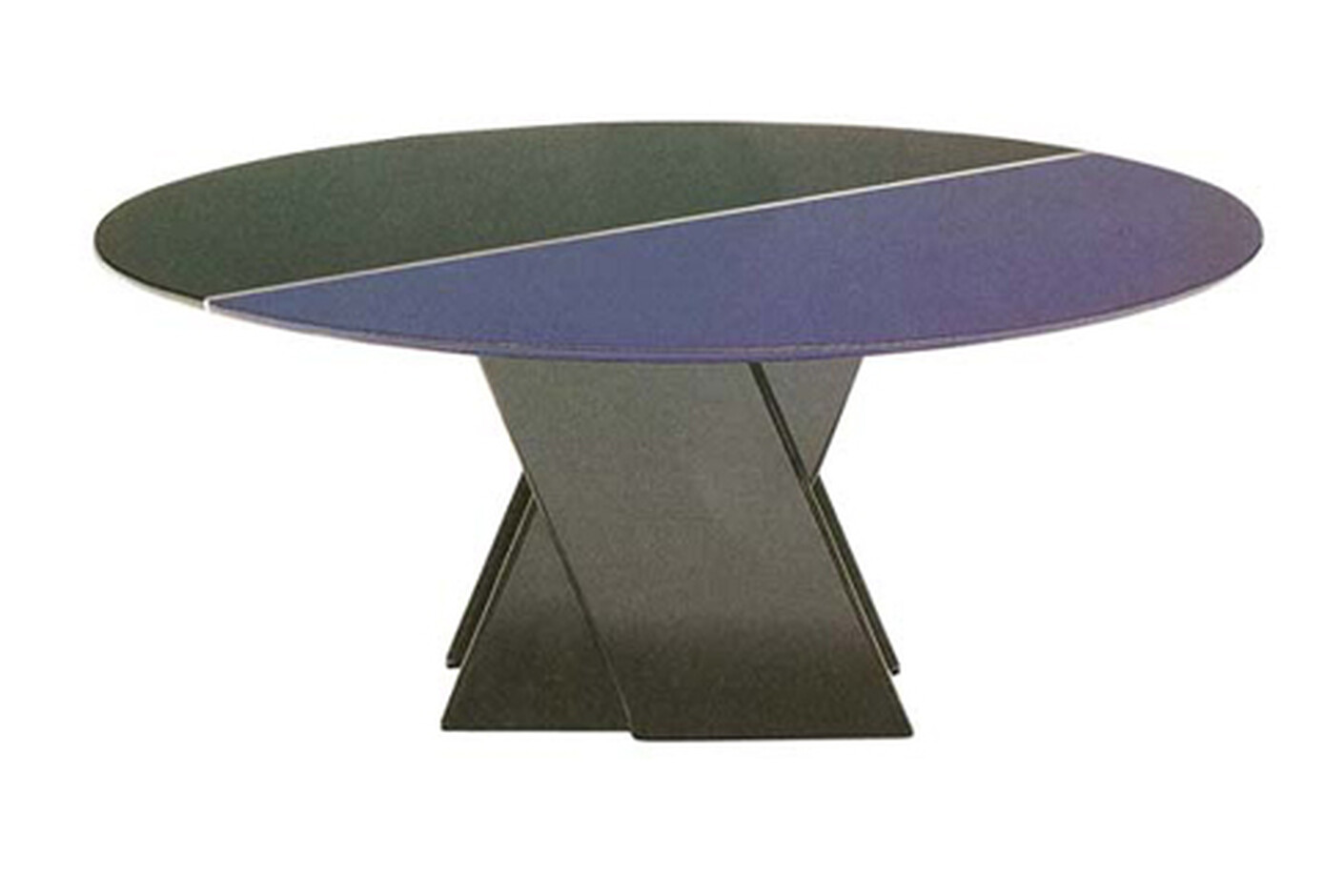 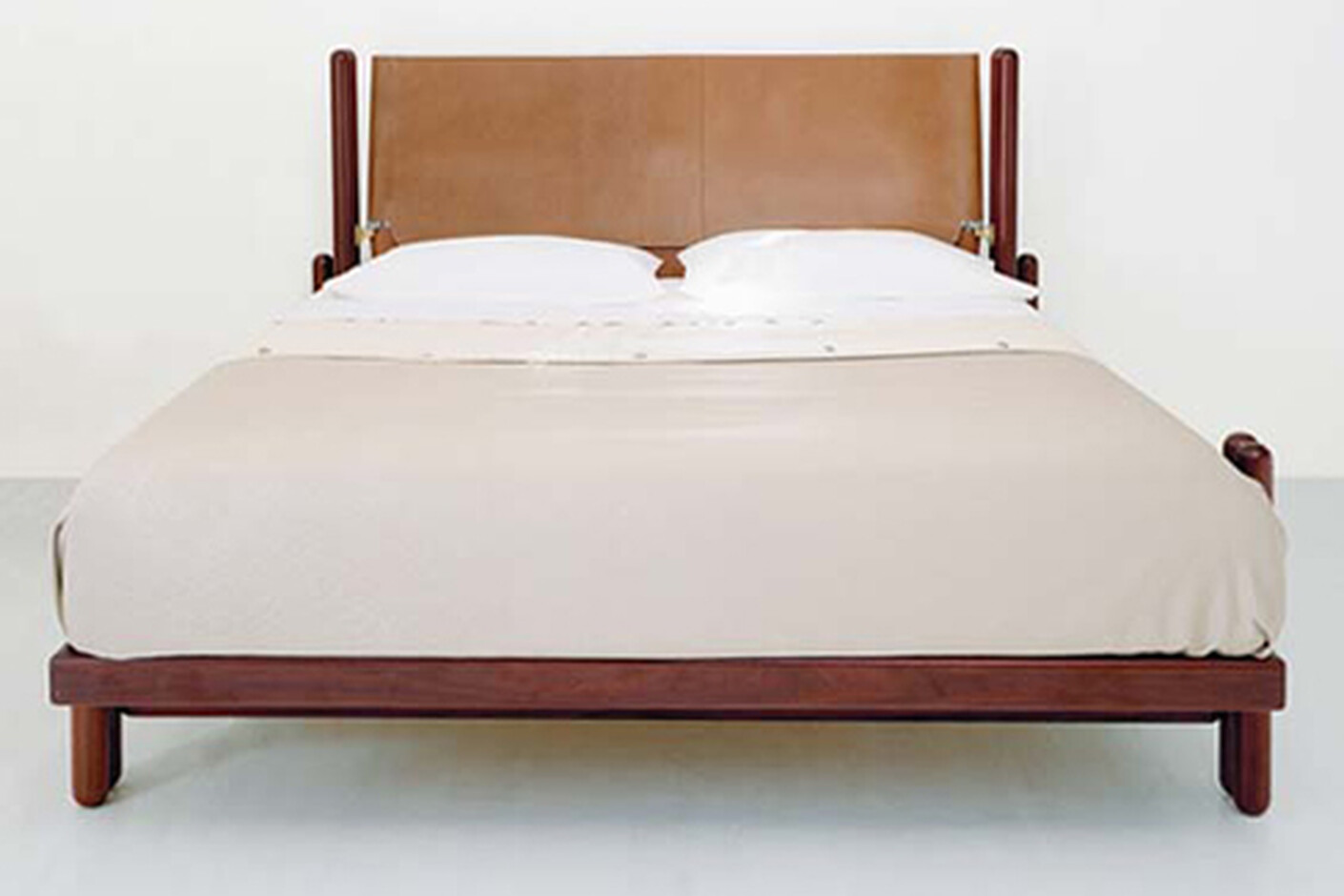 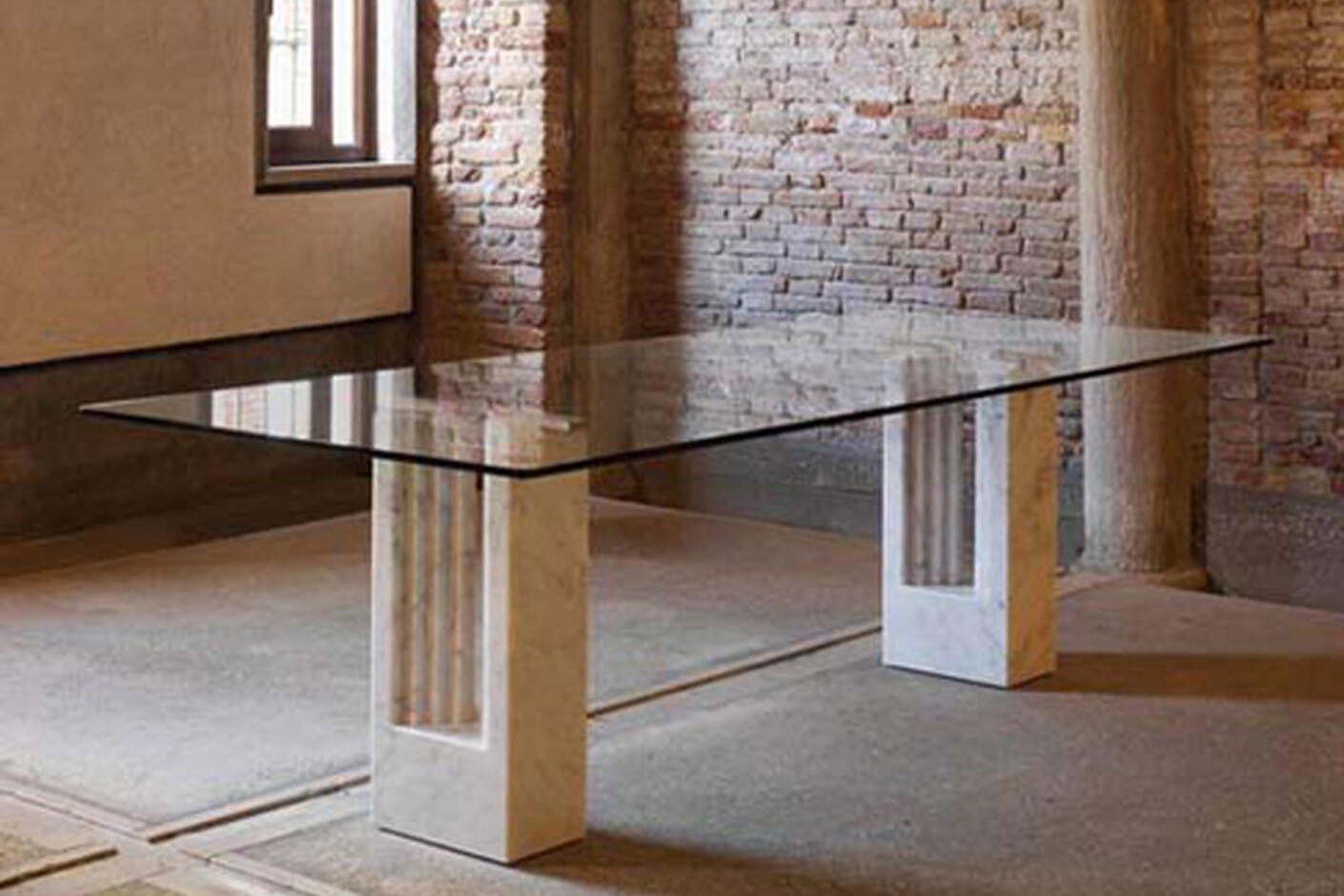 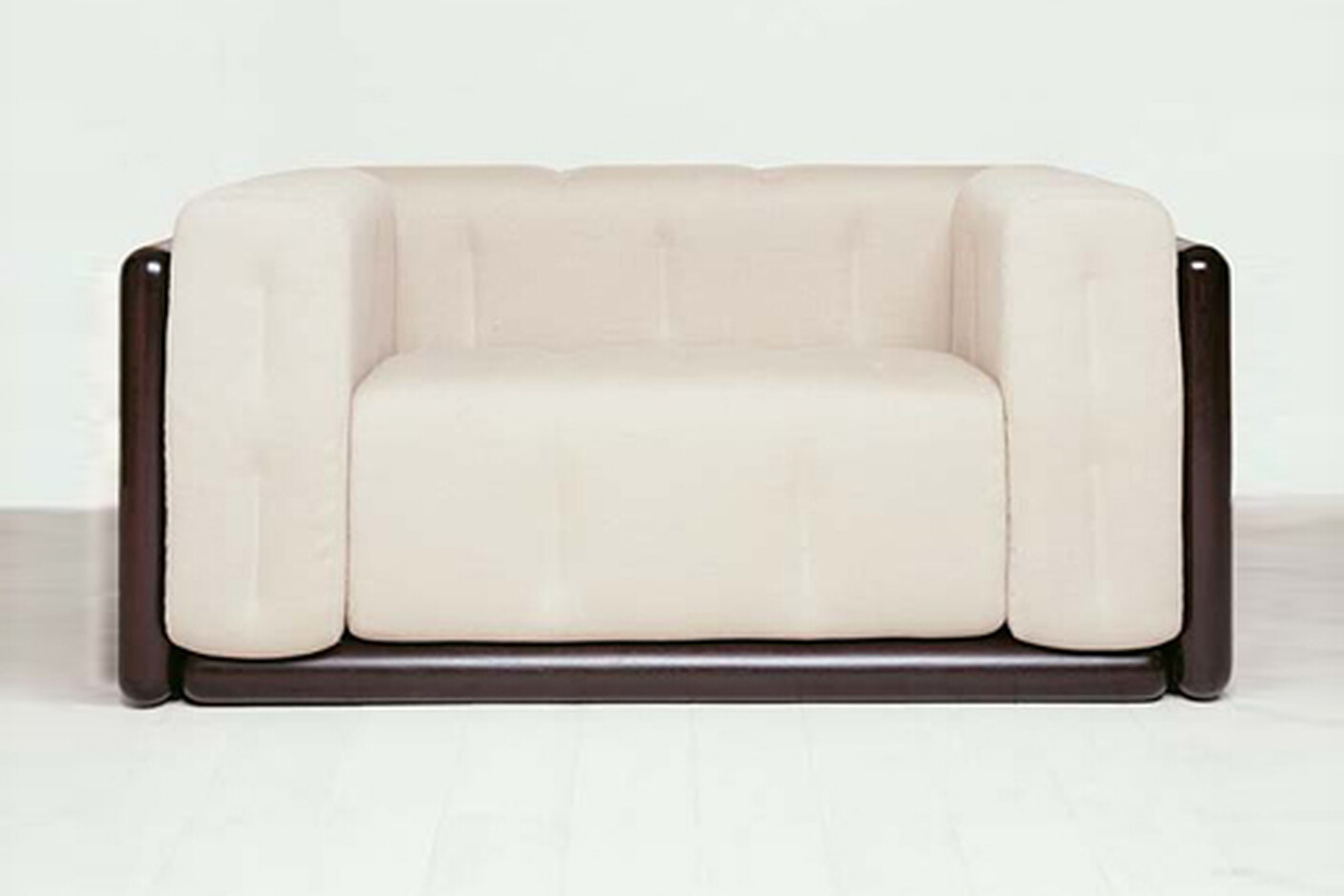 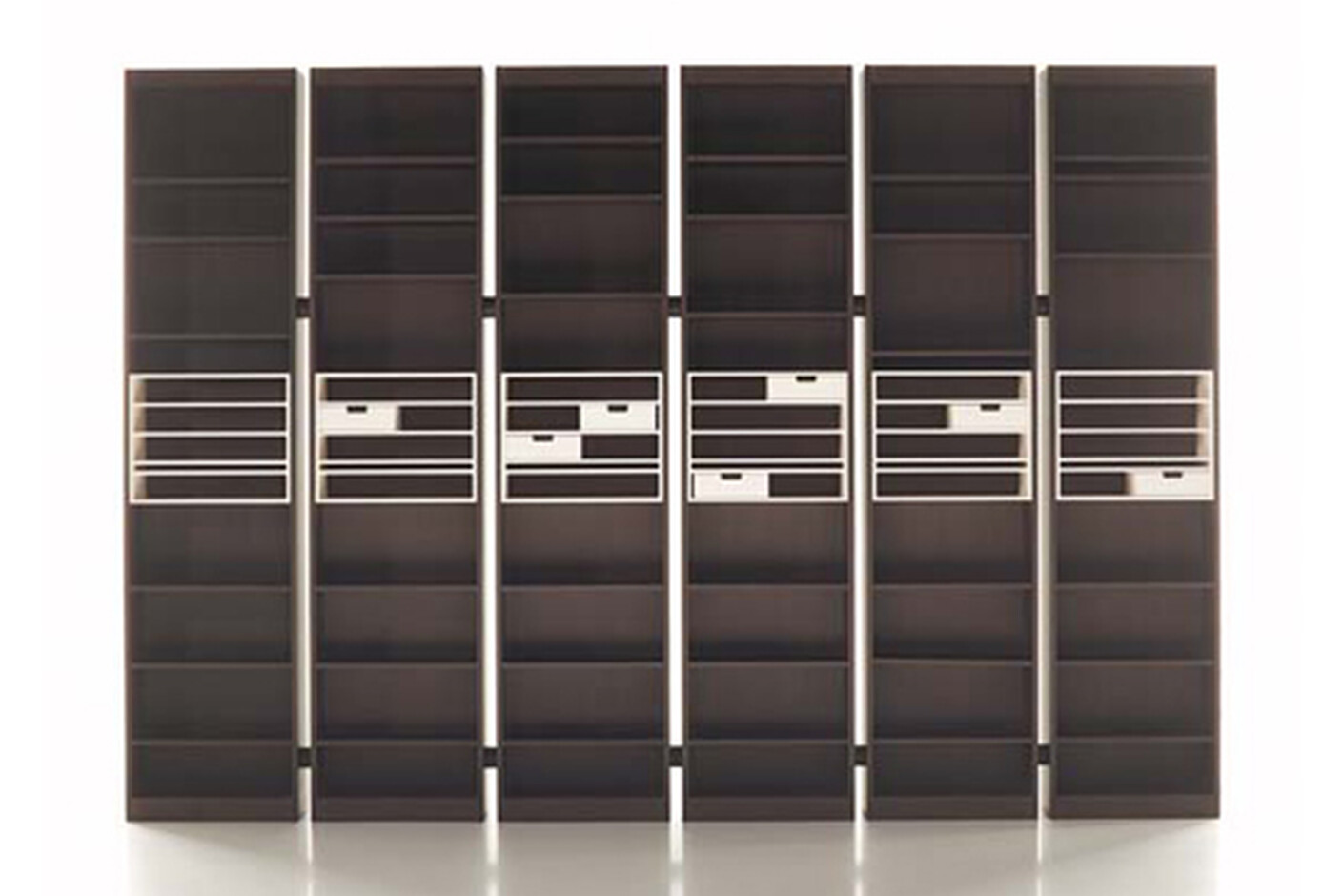