Peter Zumthor has realized a villa for vacation home provider Living Architecture in Devon in southern England.
by Fabian Peters | 2/6/2019

It is a strangely archaic material that is currently undergoing something of a renaissance: tamped concrete. It had its first heyday in the second half of the 19th and the early 20th century. Prior to the dawn of the age of reinforced concrete, tamped concrete could be processed by tradesmen using simple methods and was utilized above all for foundations and suspended ceilings. Where tamped concrete is brought to bear in walls, it has to be filled into the formwork in layers, with each layer being compressed by hand. The result: a clear striped pattern in the wall after it has hardened.

Peter Zumthor brought tamped concrete back into the limelight just under ten years ago with his now long since famous chapel Bruder-Klaus-Feldkapelle near the village of Wachendorf in the Eifel mountains. The concrete made using coarse aggregates lends the prismatic structure that rises up like a stele from the surrounding meadows and boasts an exterior that calls to mind geological strata. Now, Zumthor has returned to the material for his design for a villa in the county of Devon in southern England; indeed, he has placed even more emphasis on the striped appearance of the walls as a design element. Whereas in the chapel in the fields the materiality retreated visually behind the striking stereometric form of the structure, in the elongated bungalow it becomes the dominant feature. Here the dark, unsettled joint pattern across the walls resembles the veins in a slab of marble or the grain in a piece of wood. From close up, it lends the concrete an organic impression, as though it has grown. From a greater distance the irregularity disappears and the striped pattern looks like rustication. It may remind you of the beginnings of modern villa construction in the 15th century, or the country houses of the Medici, built in an attempt to recreate the Roman villa suburbana described by Vitruvius and Pliny. And naturally of Andrea Palladio, who succeeded in producing perhaps the most perfect formulation of this building style at the transition from Mannerism to Baroque. Like a cornice, the edge of the flat roof made of flawless reinforced concrete forms the upper end of the exterior walls. This contrast between the different appearances of the construction material, which could not be more extreme, demonstrates once again Zumthor’s outstanding sensitivity to material aesthetics.

Of course, in his villa Zumthor also addresses the issue of opening the architecture out towards the surrounding landscape. Having said that, we should be wary of talking of the building and countryside melding or of fluid transitions between the inside and outside, despite the large windows. The architect has framed the panes in strongly contoured metal and by no means exhausts the possibilities of filigree construction in this field today. In this way, Zumthor defines the view, as he does with almost all his buildings. His windows mark a sharp divide between house and landscape. In this regard too, his villa is closer to Palladio’s buildings than the pavilions by Mies van der Rohe, for instance.

Incidentally, like the villa suburbana, Zumthor’s house is also not intended to be a permanent residence. It is a summer house, a place to relax – yet not for fixed occupants, but as a vacation home for hire for cultivated (and solvent) peace-seekers. The developer is the small but highly exclusive vacation home rental firm “Living Architecture”, which has already realized a whole raft of eye-catching buildings in the UK. From the very beginning the company, founded by Alain de Botton in 2006, strove to create extraordinarily high-grade architecture and offer it for vacation use. Alongside the enthusiasm for architecture, this was also always driven by an educational idea. The most recent building realized for Living Architecture, in addition to Zumthor’s house, is a structure by Jahn Pawson in Wales, in which the architect interprets postwar Scandinavian residential architecture in his very own style. With their minimalism, these two buildings are the antithesis of the brightly colored camp style of the vacation home built for Living Architecture by FAT Architecture and Greyson Perry in Essex in 2015.

Peter Zumthor is currently working on a far larger project, in which tamped concrete once again defines the exterior appearance. In 2017, he won the competition to build the extension for Fondation Beyeler in Basel. The exhibition building of the three-part architectural ensemble is set to underscore as a monolithic sculpture far more strongly than the house in Devon the solidity of the construction material, whereas the event pavilion will demonstrate a clear association with the bungalow in southern England. If the initial renderings are anything to go by, in Basel Zumthor will again give the tamped concrete a new guise, namely a more planar, more monochrome one – and thus demonstrate once more the myriad possibilities of this long-forgotten construction material. 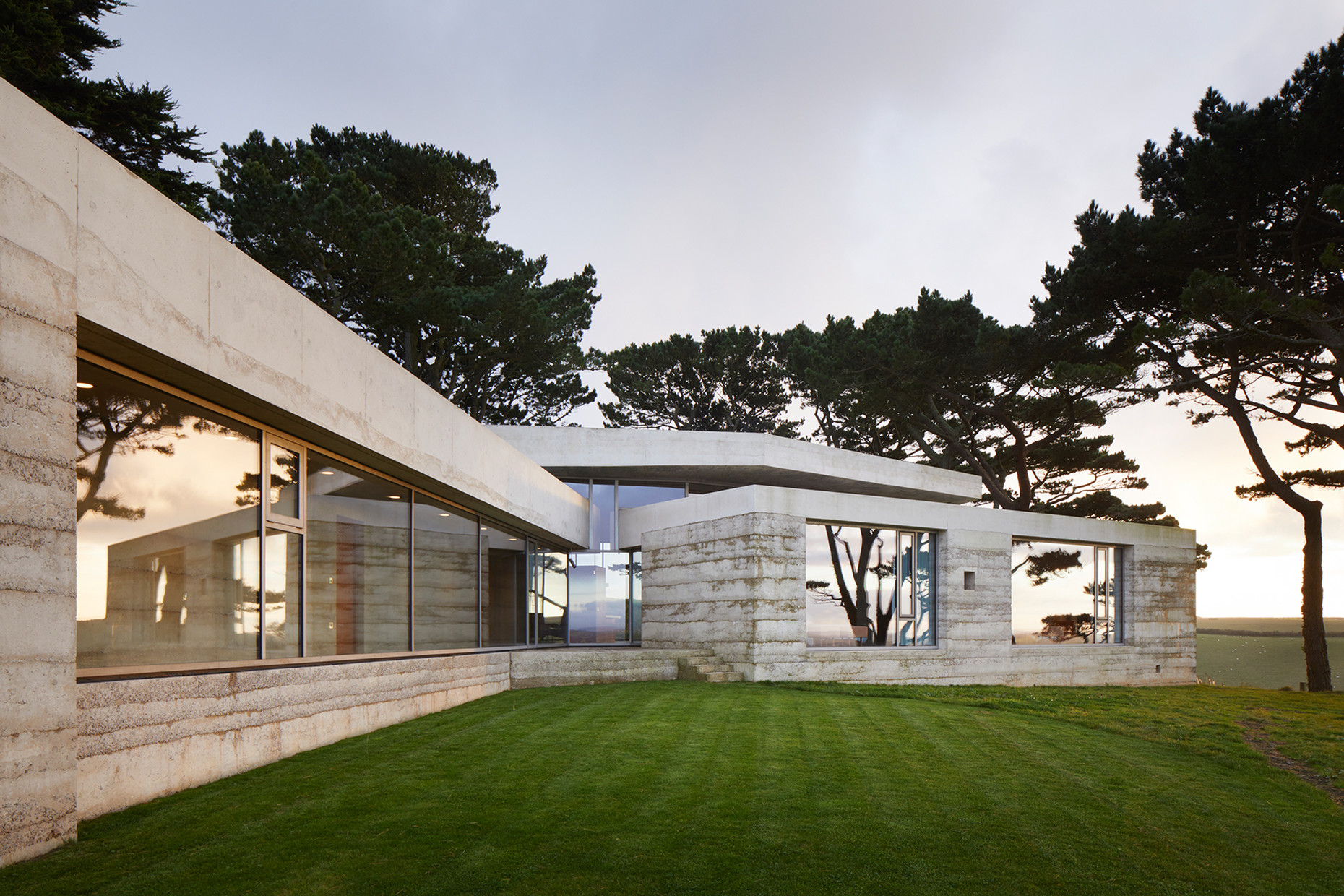 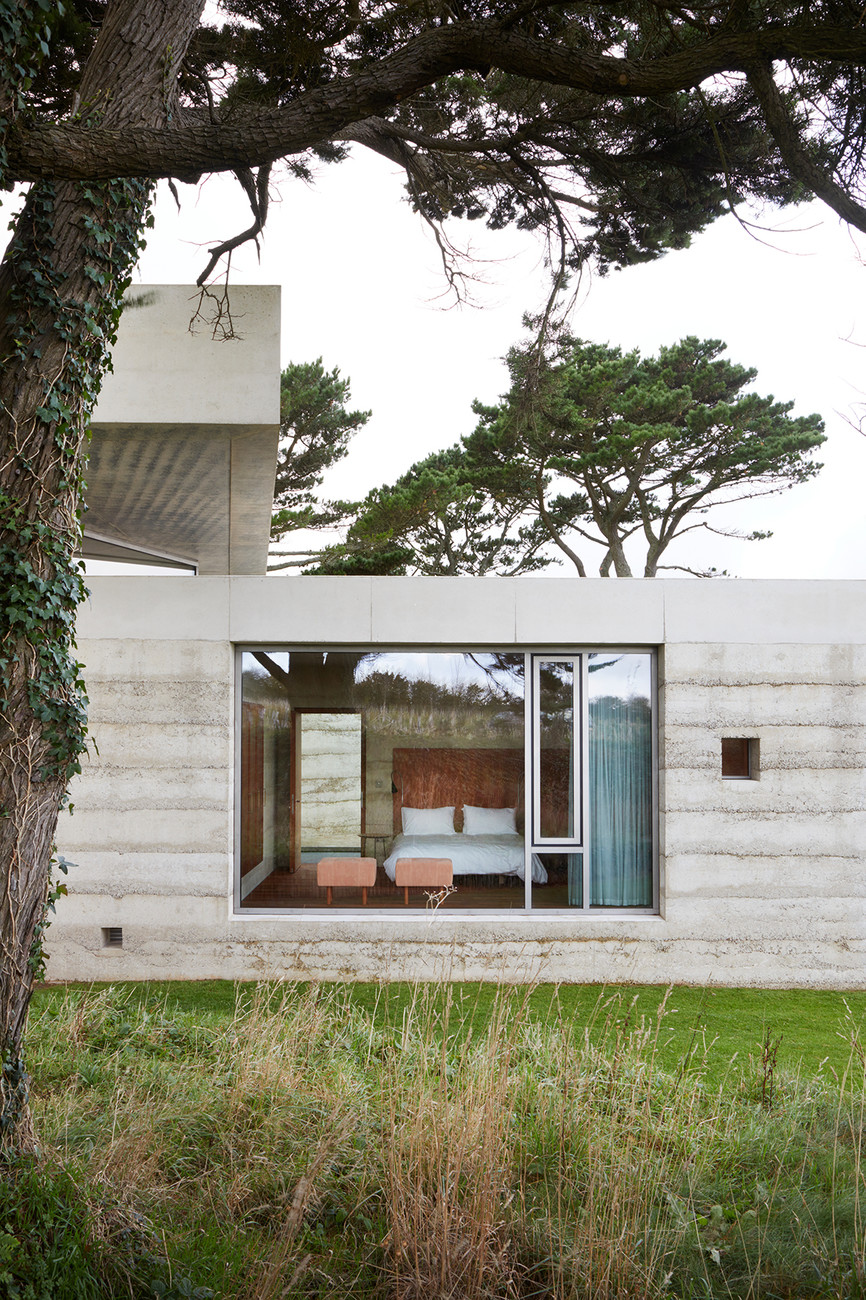 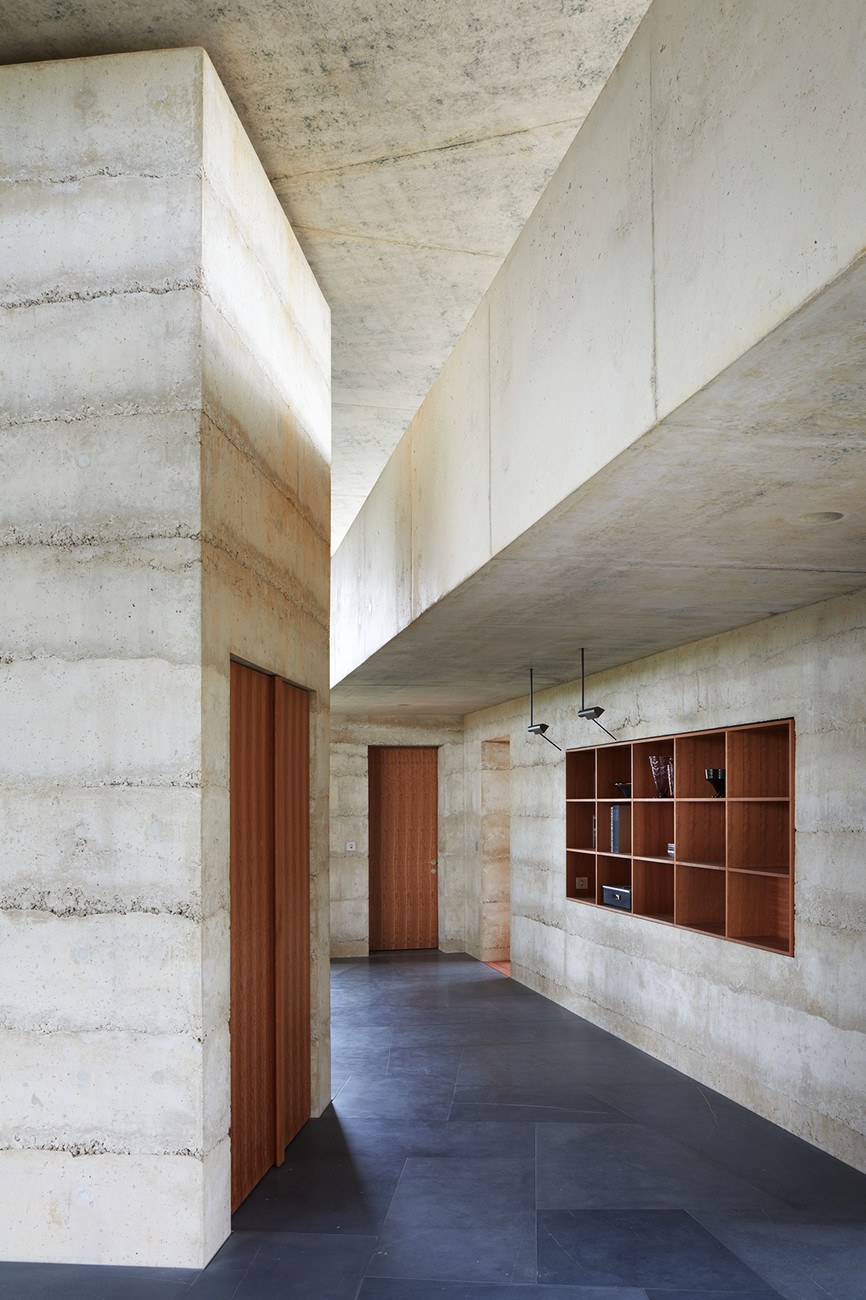 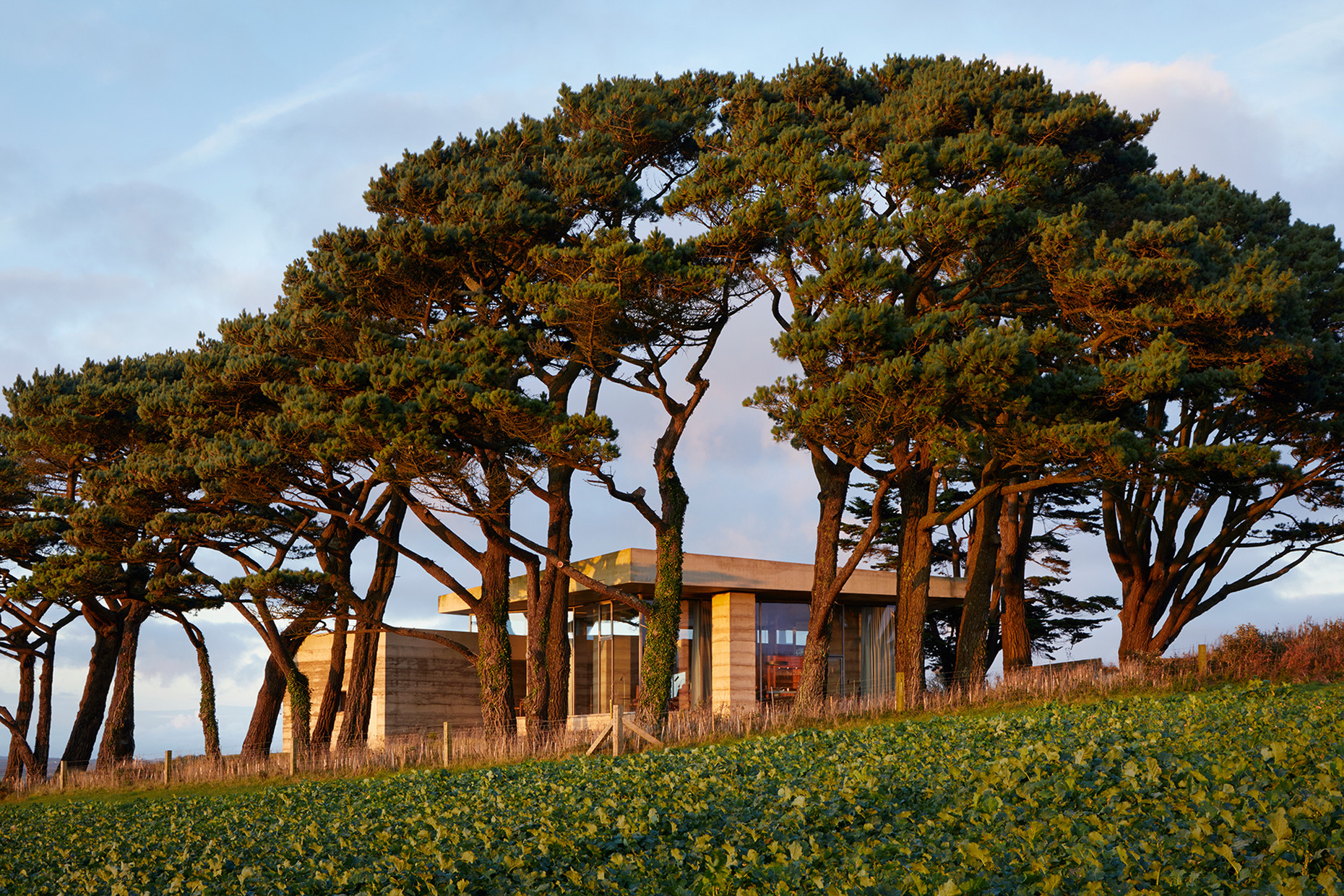 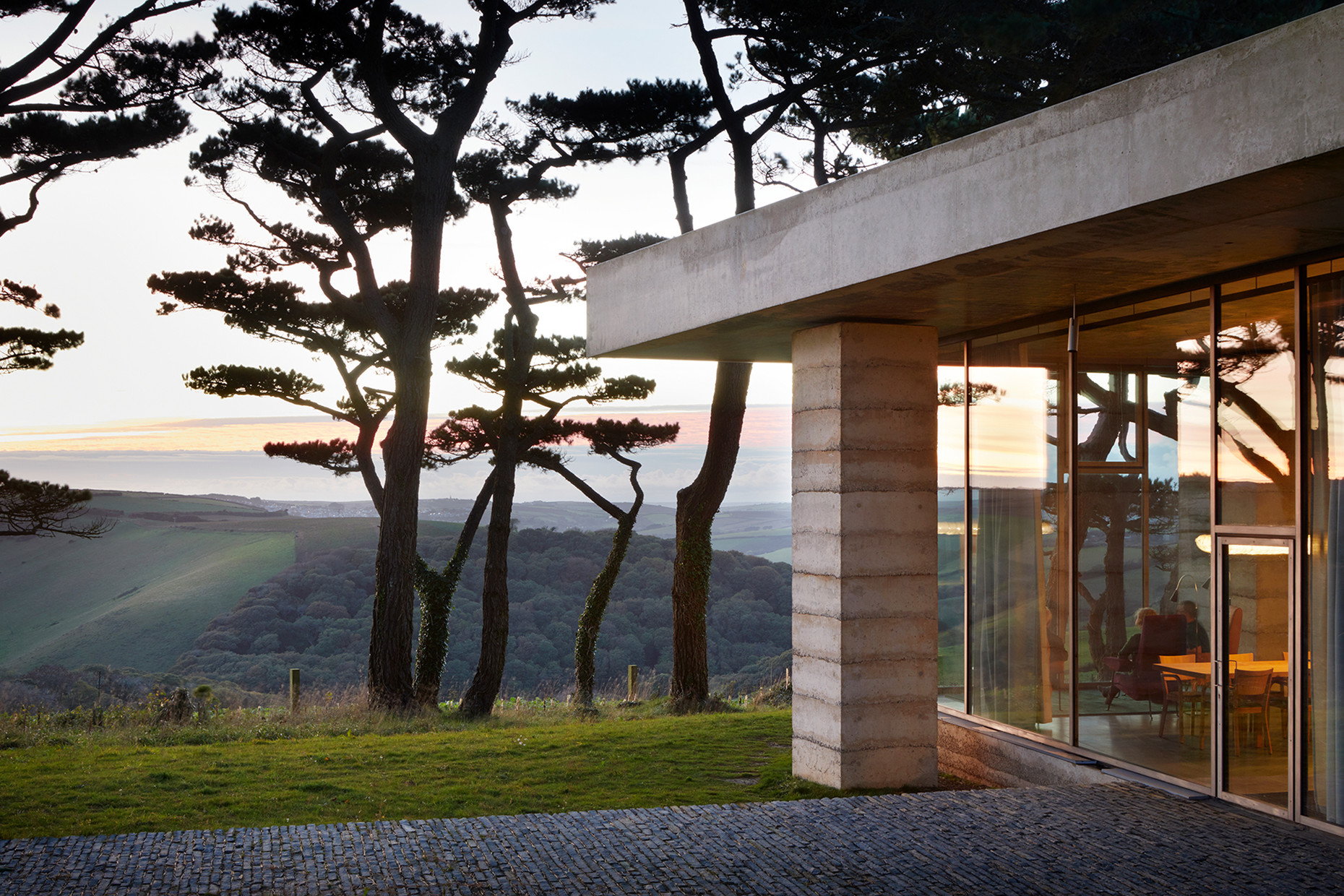 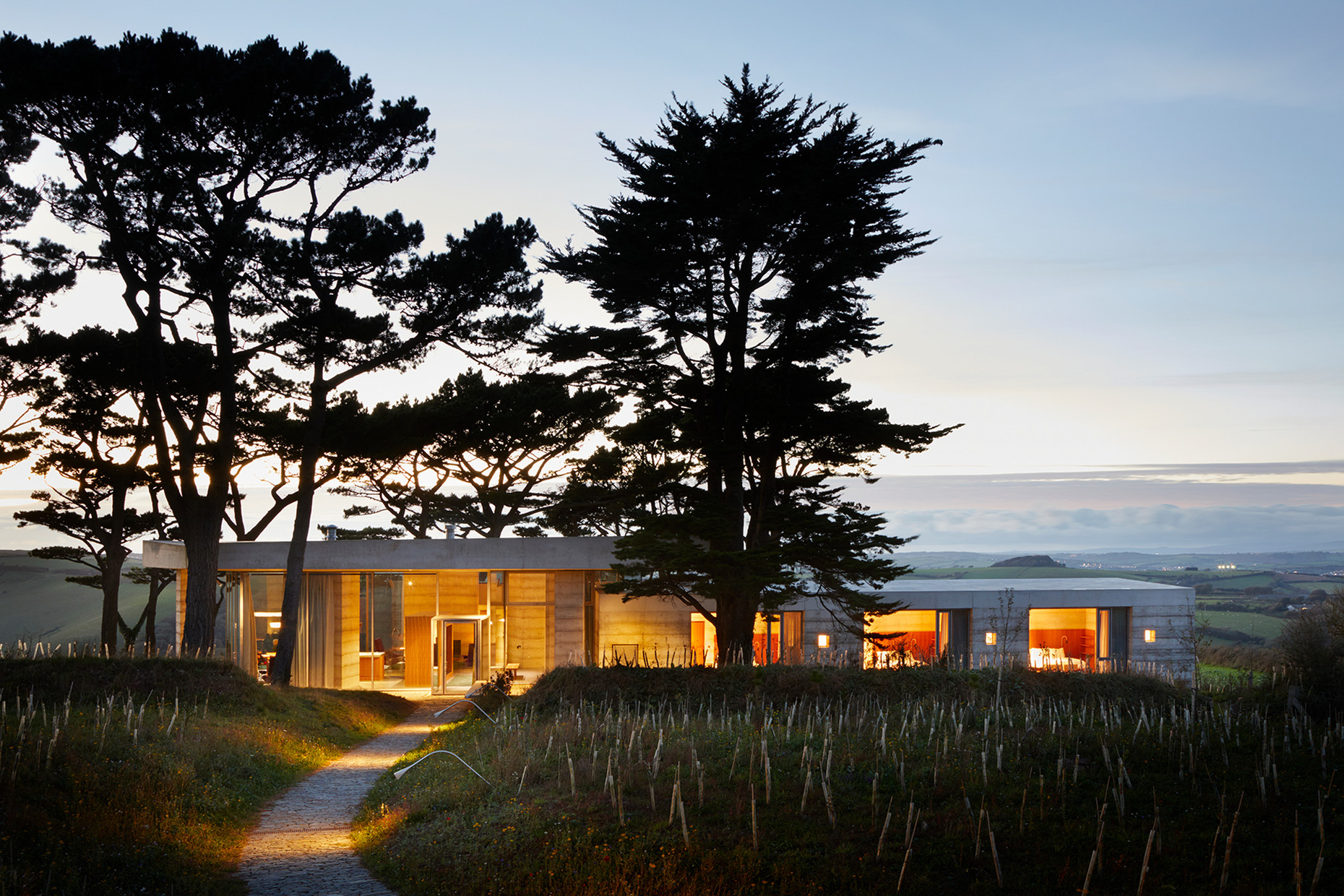 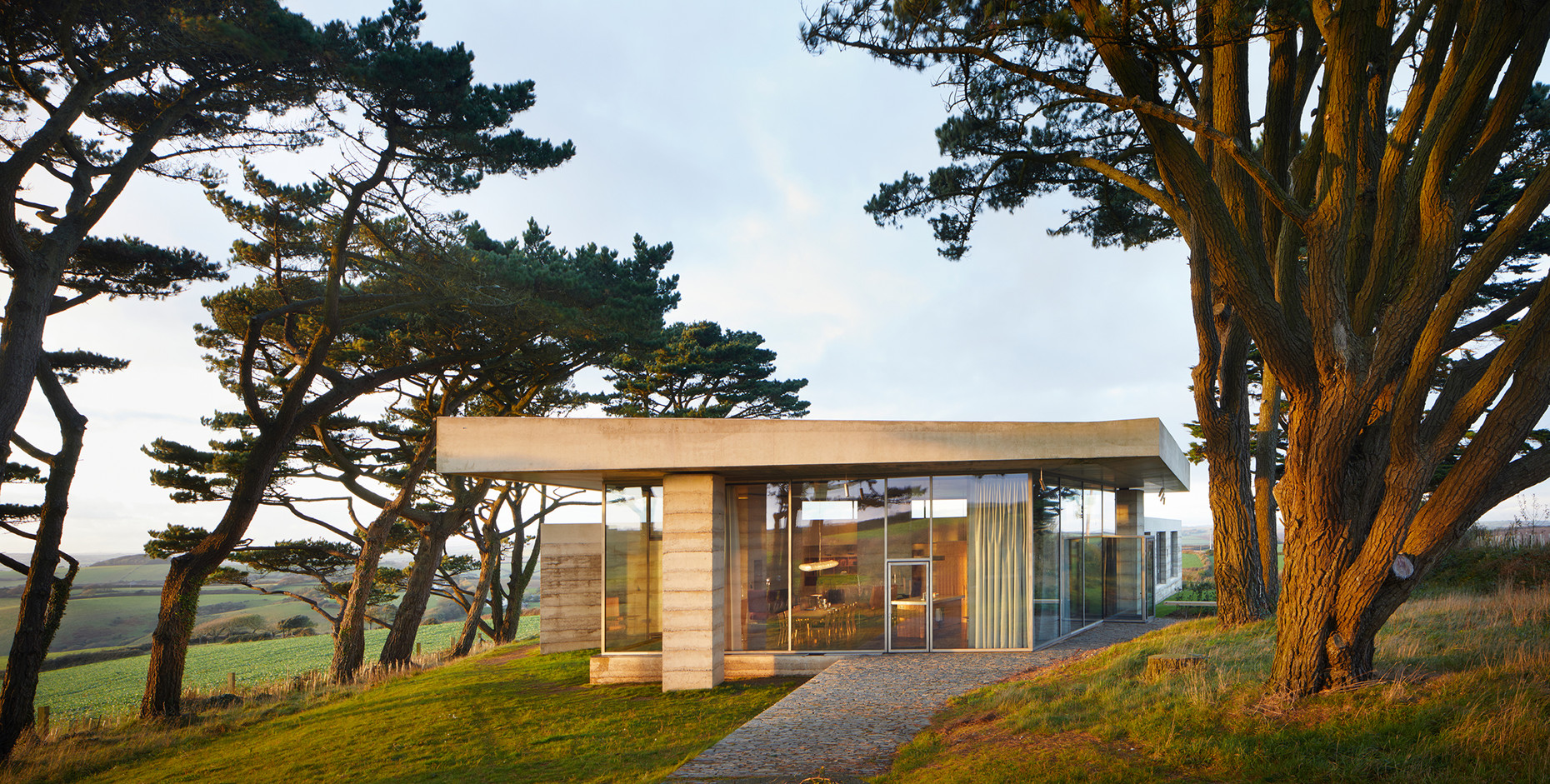 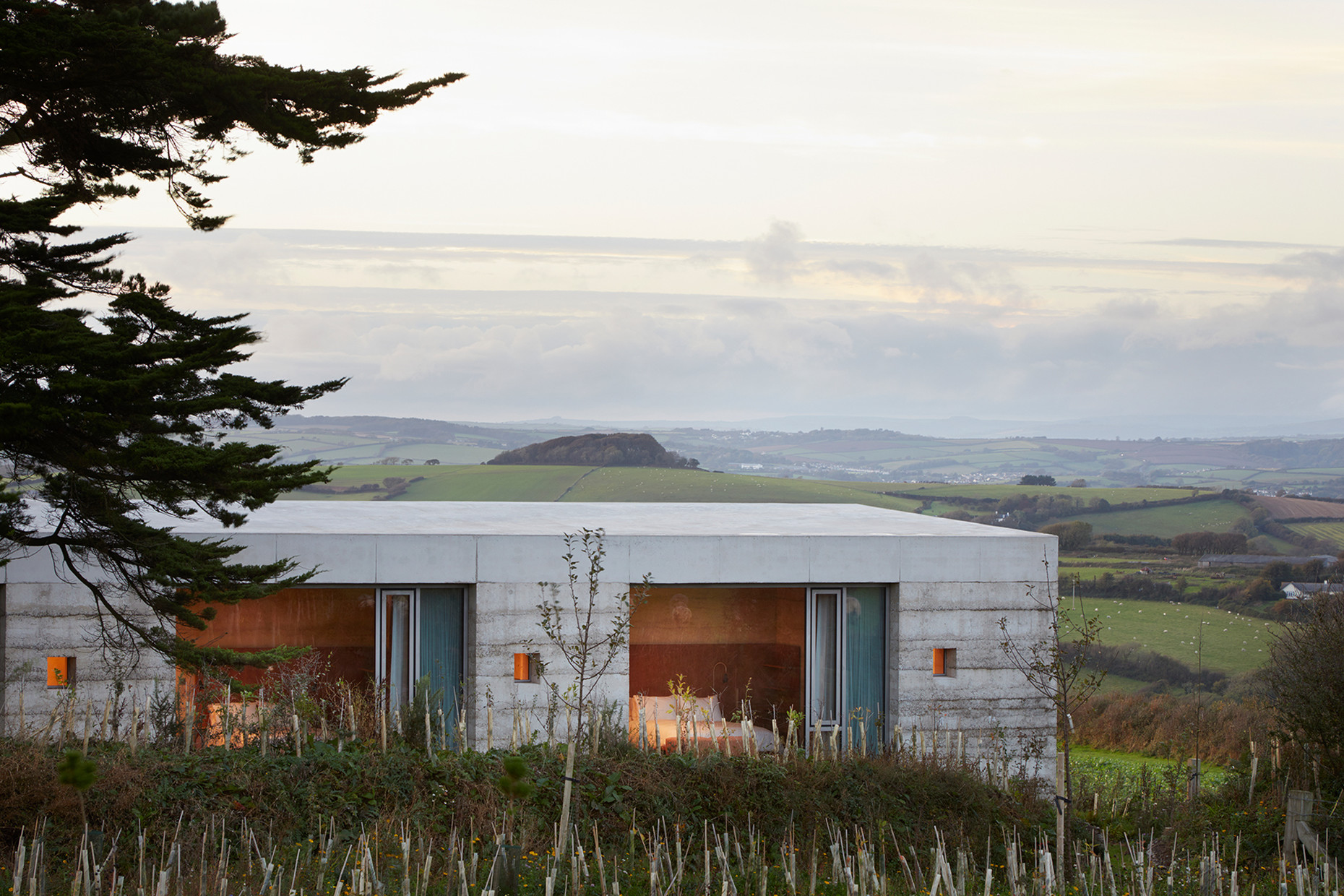 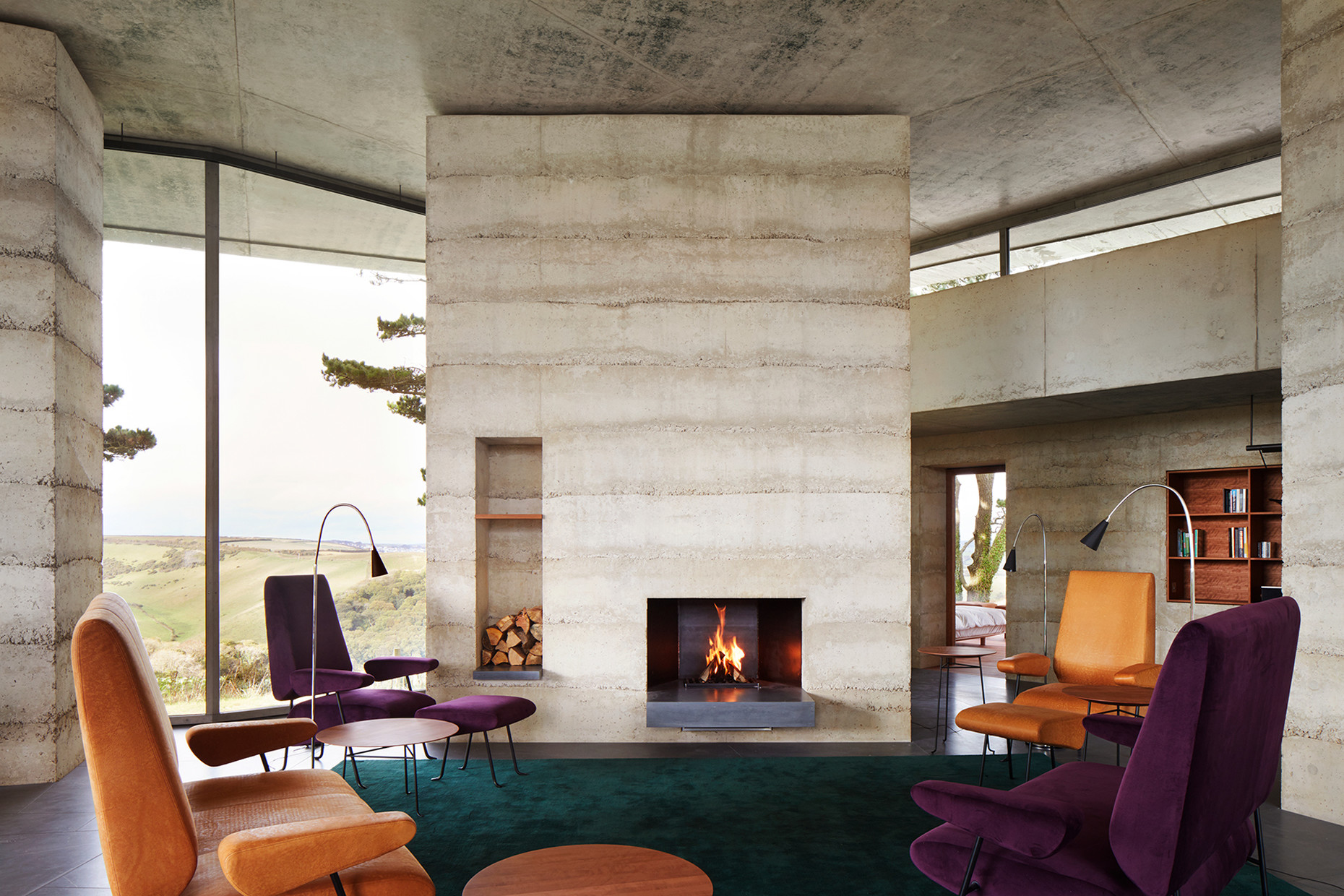 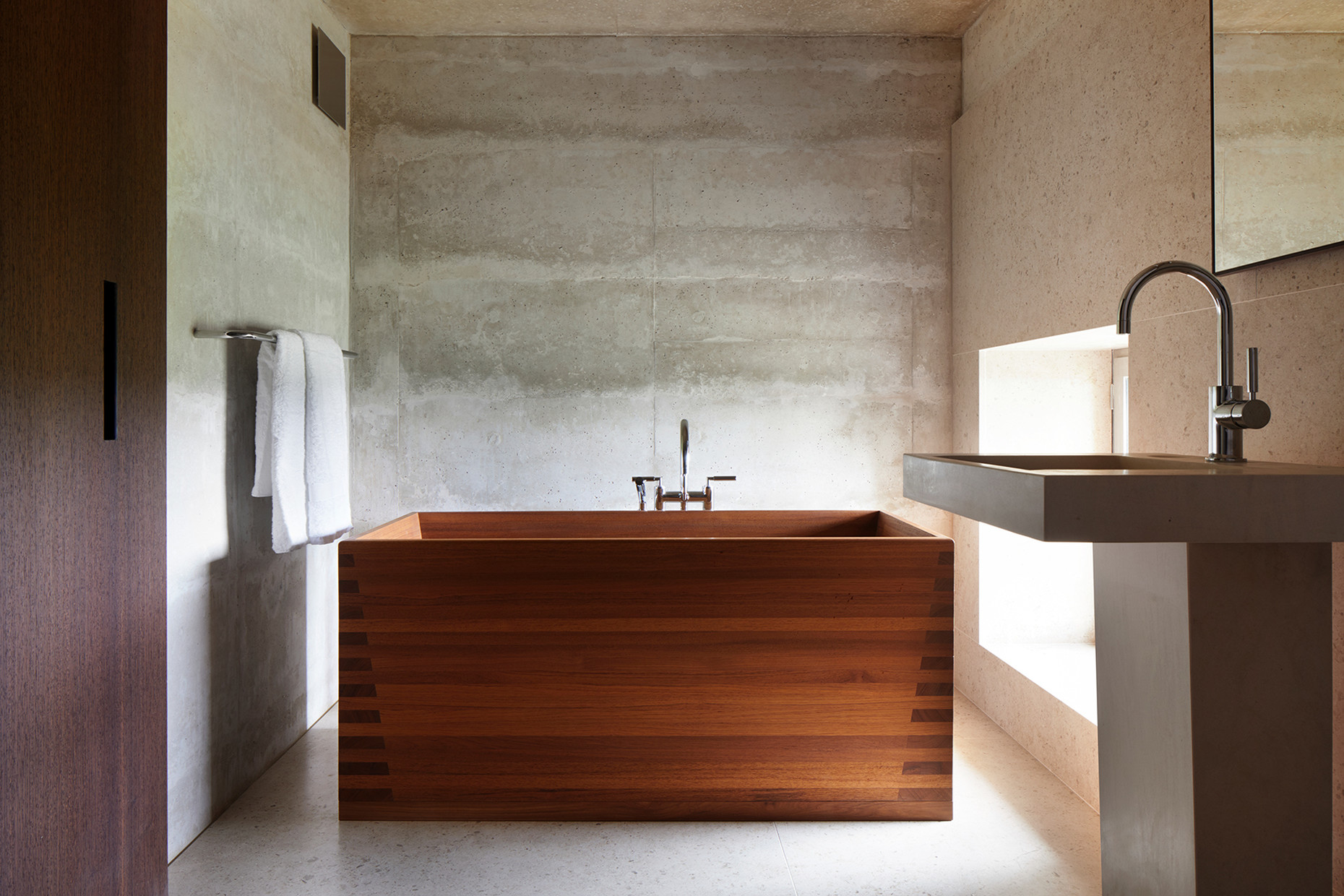 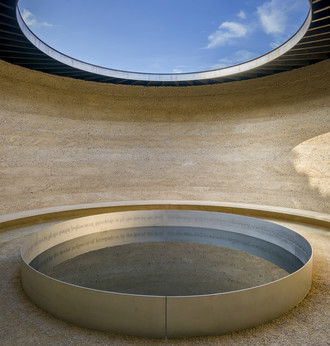 Written in the water

Mark Wallinger has created an impressive art work in an historical location, prompting audiences to engage critically with its historical legacy. 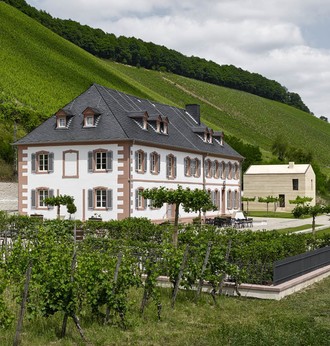 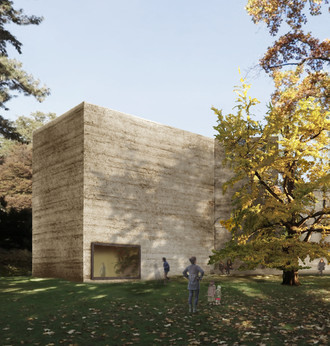