This cupboard evokes memories – of some of the great wardrobes of the past, for example. Or inspires dreams – of a simple loft, perhaps, in which the Plusminus would make an ideal, and atmospheric, centrepiece, whether as a bar, as a cupboa

rd for table-ware, or as a wardrobe. Perhaps because it was developed as part of a completely new interior for an old house in the Engadine.
Plusminus is made of solid chestnut, a wood which gives it an exclusive appearance and which needed intensive

development work, especially on the doors. After all, solid wood expands and contracts depending on air humidity. Which is why cabinetmakers have long been using the principle of framing and panelling to allow wood the necessary breathing space. The solu

tion developed for this cupboard was a new one, however: Here, the doors are made of vertical panels which interlock according to the plus-minus system, making for sufficient play in the joints. The frame is provided by two horizontal strips attached to t

he back which prevent the joints from coming adrift. Tradition is here combined with innovation in much the same way. 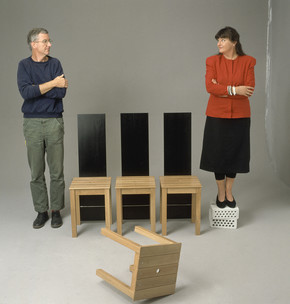