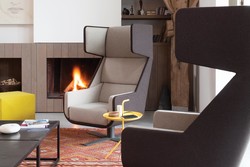 Enthoven Associates started back in 1976 as IDEA (Industrial Design Enthoven Axel), and changed its name in 1989 when it became a partnership. The company was founded by Axel Enthoven, who is still the company's President. At the moment, the company has 18 staff members. The bureau has no sectorial specialisation, although approximately 50 % of sales are done in furniture and transportation. Enthoven Associates has clients worldwide. Partnerships were developed in South-East Asia and the Far East to better service clients in this area. Daughter companies were started in The Netherlands in 1999 and in France in 2007. In 2001, Enthoven Associates merged with Yellow Window Management Consultants to widen the scope of decision-support services. Enthoven Associates moved in 2007 to a new location in the city centre of Antwerp. This is a modernist building from architect Willy Vandermeeren.