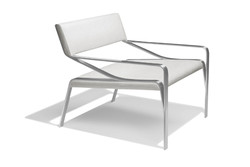 Born and raised in Japan, Emi Fujita ventured out into the world when
she was only sixteen to attend TASIS, The American School in Switzerland.
Realizing that she wanted to pursue her artistic side more seriously, Fujita
transferred to the Interlochen Arts Academy in Michigan where she concentrated on the study of painting and sculpture. As an Interlochen student, she received the prestigious Marie Walsh Sharpe Art Foundation award. After graduation, she attended Maryland Institute, College of Art, majoring in fine art before transferring to study environmental design at Art Center College of Design as a recipient of the General Motors scholarship.

Fujita's artistic talents became apparent at the early age of seven
as she became skilled in the art of calligraphy. Throughout the next decade, she won numerous calligraphic competitions including the noted Yomiuri Newspaper award. Fujita's designs continue to be influenced by her cultural aesthetics, as well as the inspiration of Japanese sculptor Isamu Noguchi. In the same manner, she strives to achieve sculptural quality in her work while creating furniture and environments that transcend international boundaries.