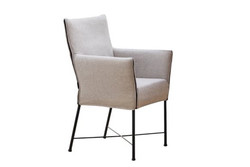 Had it not been for designer Gerard van den Berg, Dutch design might not be all that it is today. Taking a radical departure 30 years ago from the Netherlands’ tradition of solid wood furniture, van den Berg paved the way for a Dutch design renaissance. With van den Berg’s designs, the Netherlands quickly became a resource for distinctive modern design in the latter half of the 20th century, joining the ranks of Italy and Denmark. Van den Berg attributes his innate talent for design to a natural curiosity, a creative, open mind and a love of adventure.

But he also gained the necessary skills while apprenticing as a furniture maker in his father’s company in Hellevoetsluis. Of his apprenticeship, which began in childhood, Van den Berg said: There I learned to practice the craft to its technical perfection. Under the guidance of extremely experienced craftsmen, I was able to polish and fiddle with my models for weeks, and I could try out all kinds of materials and manufacturing skills. That is why I really know how people sit and how to build a seat.

My technical knowledge is an essential contribution to my artistic creativity. Van den Berg designed furniture for his father until founding Montis with his brother Ton in 1974. Allowing the upholstery to direct him, van den Berg began changing the shape of Dutch furniture—literally—with seating that was graceful and slim while remaining solid and comfortable. Today, Montis designs can be found in homes and businesses around the world.

In 1989, van den Berg opened his own design studio, where he continues to design seating under the name of Gerard van den Berg Design for such companies as Molteni, Perobell and Wittman. In addition, in 1991, van den Berg began the company LABEL, carrying forward the earlier success and prestige of Montis. In keeping with van den Berg’s unwavering vision, LABEL seating designs place paramount emphasis on comfort, quality and a casual aesthetic.

Without exception, van den Berg’s seating shows a tension between the design and the material chosen—angular metal legs set against a full, rounded seat. For every seat, a base is designed to highlight the form, thus creating the beauty and counterpoint of each of his designs.