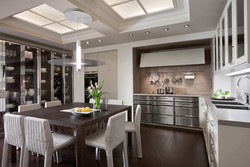 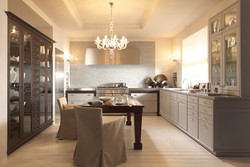 Since founding de Giulio kitchen design in 1984, Mick De Giulio has been creating extraordinary kitchens for distinctive residences throughout the United States and abroad, and has designed several best-selling product lines for leading German manufacturer, SieMatic Corporation. In 2002, his design of the Hudson Valley line was selected for the kitchen at Washington D.C.'s historic presidential guest home, Blair House. In 2006, his design of the BeauxArts Collection made its international debut to critical acclaim, and quickly emerged as SieMatic's bestselling kitchen worldwide.

In addition to directing two successful showrooms in Chicago specializing in residential kitchen design, including one at the Merchandise Mart's LuxeHome, Mick has completed several notable commercial projects, including the test and demonstration kitchens for the Chicago Tribune, Sub-Zero Freezer/Wolf Appliance in Madison, Wisconsin, and Meredith Corporation (Better Homes and Gardens magazine) in Des Moines, Iowa. In 2007, his design of a special kitchen space for the Westye Company (distributor of Sub-Zero and Wolf products), drew positive reviews from the press and design community when it was unveiled at New York's A&D Building.

Mick regularly consults with Sub-Zero Freezer/Wolf Appliance on new product introductions, and serves as a judge for their biennial international design competition. He was selected to design the kitchen for the first DreamHome exhibit at Chicago's Merchandise Mart in 2005, was again selected for the 2009 DreamHome, and has served as a speaker at industry events including K/BIS, NeoCon World's Trade Fair, and NeoCon West. His distinguishing work has received much publicity, often appearing on covers and in multi-spread articles in national shelter media, including Veranda, Interior Design, Town and Country, and Traditional Home, as well as several international publications including Elle, Nile, Keukens, Domizil, Gods & Gärdar, Architektur&Wohnen, and Wohn!Design. His creative and artistic approach to kitchen design is acknowledged by industry experts. Former Editor in Chief of Traditional Home and Better Homes and Gardens, Karol DeWulf Nickell wrote: "De Giulio's philosophy is a timeless one, based upon bringing beauty and comfort to a functionally customized space."

In a special tribute to industry icons, Kitchen and Bath Business magazine honored Mick in 2005 by recognizing him as one of the 50 most influential people in the kitchen and bath industry over the last 50 years. He was voted a Kitchen and Bath Design Leader by Interior Design magazine in 2003, and was inducted into the University of Illinois -- Chicago Area Entrepreneurship Hall of Fame in 2004. Mick is an active supporter of the School of the Art Institute of Chicago and is a member of the New Artists Society for the School.