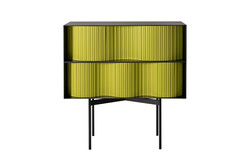 Born in Yokohama in 1943. Graduated from the Kuwasawa Design School in 1966. In 1970 Uchida started his own firm, Uchida Design Studio and later in 1981 established Studio 80 with Toru Nishioka. Besides teaching at his alma mater since 1973, he is a Guest Professor at Tokyo Zokei University. Uchida received the Mainichi Design Award, the Best Store of the Year Special Award, the First Kuwasawa Design Award, Education Minister's Art Encouragement Award and others.

As a leading Japanese designer, Uchida has engaged in a wide range of design projects such as a number of interior works, furniture, products and urban planning in Japan and abroad. His major works are the Wave building in Roppongi, the series of boutiques for Yohji Yamamoto, the Japanese Government Pavilion for Tsukuba Expo. '85, the Hotel Il Palazzo in Fukuoka, the lobby of the Kyoto Hotel, the Kobe Fashion Museum, the tea rooms 'Ji-an, So-an, Gyo-an' and the Mojiko Hotel. His works are held in permanent collections at the Metropolitan Museum of Art in New York, the San Francisco Museum of Modern Art, Montreal Museum of Decorative Arts, the Denver Art Museum and others. His publications include 'Bounds of Privacy', 'Japan Interior vol.1 - 4', Mojiko Hotel Aldo Rossi Shigeru Uchida' and 'Interior Design and the Japanese', and ‘Book of Furniture’.