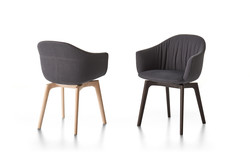 Simone Bonanni was born in Pordenone (Italy), August 1989. He graduated from Istituto Europeo di Design (Milan) in 2011 with the project Atmo, awarded with Honourable Mention at the 23rd ADI Compasso D’oro Award (Targa Giovani). In the same year he began his professional career working at Valerio Sommella Design Studio in Milan. In 2012, he left Milan and joined the Marcel Wanders team (Amsterdam, NL). Here he worked as product designer and project leader for 3 years, designing for clients such as Olivari, Bisazza, Magis, Moooi, Poliform, Alessi and many others. Back from The Netherlands in 2015, he founded Simone Bonanni Design Studio in Milan. In 2016 the project Skyline, an innovative kitchen hood designed in collaboration with Attila Veress, received the Special Mention at the Elica/Cristalplant Design Contest 2016. He is now working on several projects for selected international brands, focusing both on product design and Limited Editions, while also teaching and lecturing at Istituto Europeo di Design and IED Master in Milan.