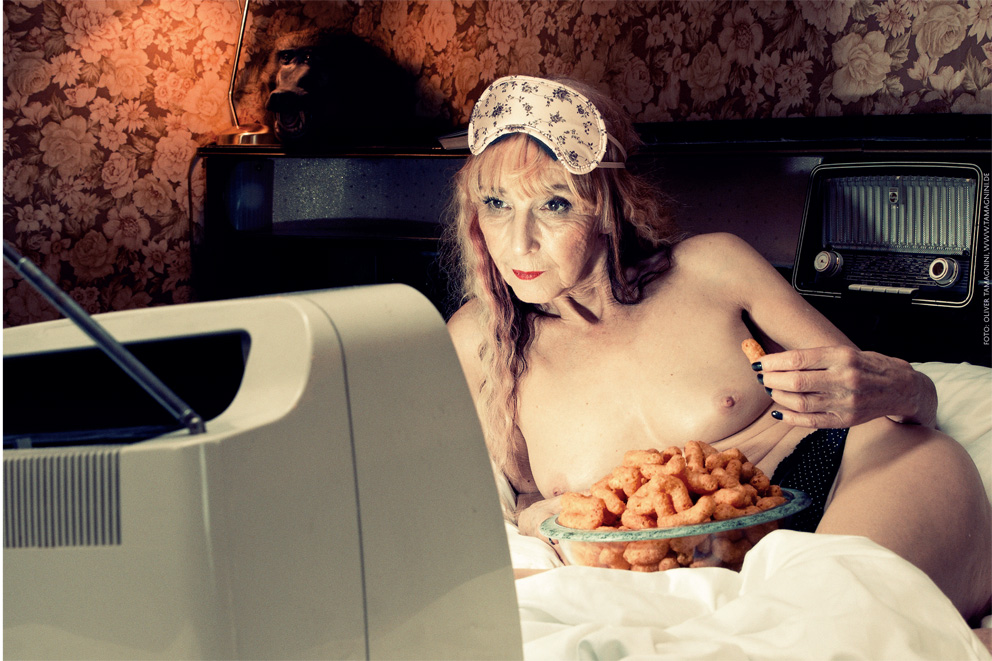 Libertine invites: the guests should be feel easy going and „at home“ in the hotel in Frankfurt, Sachsenhausen. Photo © Oliver Tamagnini

There was once a shy girl who lived with her widowed mother and frivolous sister in Alt-Sachsenhausen. Libertine, as she was called, had a secret: she wrote anonymous pulp fiction that allowed her to live out her fantasies of a totally dissolute life. She covertly distributed her stories in the district and found the love of her life in George, an American GI. The two of them transformed her family home into a cozy place, “which warmly received every person passing through. (And after just one night enjoying such hospitality guests felt as comfortable as if they were in their own homes).”

The story is part and parcel of a hotel in Frankfurt/Main of the same name that has just opened – and its concept revolves around this specially created fictional figure of “Libertine”. Naturally, the idea is to create a certain association with “libertinage” and promiscuity. Evidently, sweatshirts, smoothies and smartphones are not the only things that are easier to sell when there is a story attached to them; the same goes for hotels. Which is why the designers, architects and artists involved over the last four years in developing the “Libertine” took up the storyline and gaily embroidered on it. 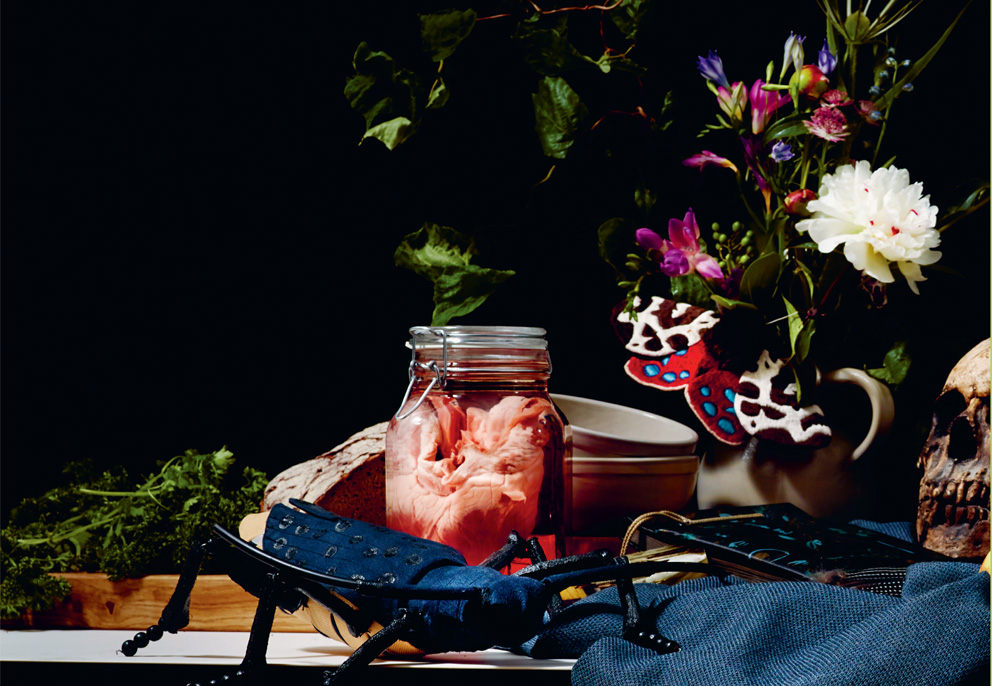 Libertine invites: the guests should be feel easy going and „at home“ in the hotel in Frankfurt, Sachsenhausen. Photo © Oliver Tamagnini

“Libertine” is the second hotel owned by siblings Stefanie, Silke, Sven and Steen Rothenberger, scions of a major mechanical engineering corporation, who have already caught the eye in the Main metropolis with their slender gourmet restaurant and art space “Sevens Swans (2011), the blend of hotel and flatshare, “Das Lindenberg” (2012), and a studio/gallery/dining location called “Der kleine Mann mit Blitz” (2015). The Rothenbergers want to replicate the concept of a guesthouse, which aspires to be “neither a hotel nor a flatshare”, but rather “a community of guests”: Following the “Lindenberg” with ten rooms and the “Libertine” with 27 rooms, other “Lindenberg” hotels are to follow, the next one with some 50 rooms in Lindley Strasse in Frankfurt’s Osthafen district – this time, it will be a new build designed by Bernhard Franken, who to date has worked on all the hotel projects and provided the interior architecture.

When you enter the turn-of-the-century building on the corner of Frankensteiner Strasse/Große Rittergasse, you are immersed in a motley collection of styled anecdotes, cosmopolitan design and regional quotes. A few steps take you to the bar-cum-lounge, which doubles up as the reception and a semi-public sitting room. The 27 single to three-bed rooms are located on the seven floors of a completely modernized old building, which was given a new elevator shaft, and a new, two-storey annex that replaces a building from the 1960s. Diamond-shaped patterns have in part been milled into the facade, an extremely decorative gesture repeated in a similar manner in the facade of “Kleinen Mann mit Blitz”.

The entrance is a mix of tavern and dark bar. Photo © Dieter Schwer

There is a stark contrast in all the rooms between a somber black and feminine pale pink, cast iron elements and sentimental objects, suggesting a cross between an oil-smeared Harley lover and a naive fashion slave. And decoration is omnipresent: For the interior Bernhard Franken collaborated with illustrator Kathi Kaeppl, who was responsible for the interior design of the previous Rothenberger projects. Kaeppl has created “Libertine’s girlhood dreams”: Embroidered tableaus on the walls of the rooms and corridors double as clipboards; in the lounge fat flies made of glass suspended from the ceiling reflect the passion “Libertine” has for collecting things; there are Tarot cards on the tables in corporate design and the in-house magazine “1/4” featuring the story of “Libertine”.

As architect Bernhard Franken reveals at the opening, he designed the rooms to be especially narrow, as specifically requested by Steen Rothenberger . Rothenberger wished this as a reminder that people have always had scant living space in Frankfurt and because he knew it would create a great sense of coziness. The rooms are based on a modular system: A sleeping area (some boast a foldaway bed), a zone with armchair and small table (e15, Prostoria, Kvadrat) and the “Black Box” – a black fitted unit with kitchenette and bathroom. The diamond, that typical pattern of Frankfurt’s famed ribbed “Äppelwoi” glasses, crops up in the rooms themselves, too, be it in the Berber carpet made in Morocco (Fashion for Floors), or as a detail on the bedding (Lore Folk).

Image shooting: Here what normally takes decades, namely to lend soul to a hotel, has simply been superimposed upon it. Photo © Oliver Tamagnini

Anyone not listening to the hotel’s very own radio program, produced in the “Lotte Lindenberg” sound studio (a 1960s BBC replica in the basement), can visit the top floor which is home to the communal rooms and kitchen, purportedly the heart of “Libertine”. What swiftly emerged at the “Lindenberg” was that the shared kitchen was the favorite place of guests hailing from far-flung places. Here you can either make your own food or have something prepared by Peter, the hotel’s chef. The ingredients come from the hotel’s own little store “Lekker”, which stocks vegetables, fruit, sausages, jams and dairy products either sourced regionally or from the hotel’s own “Permakultur” farmland in the Vordertaunus region.

It is said the “Home far away from Home” concept not only attracts creative minds, but business travelers as well such as would normally elect to stay at the Mariott. The casual lifestyle promoted for years by the Berlin-based online platform Freunde-von-Freunden (Friend of Friends) and which has already taken on a successful commercial lease of life in Frankfurt in a mixture of local-meets-cosmopolitan in restaurants such as Maxie Eisen, Stanley Diamond, Oosten or Club Michel seems to have been realized as a hotel.

Even though the concept appears so well-rounded, it only provides a vision of authenticity and actually remains completely artificial. Here what normally takes decades, namely to lend soul to a hotel, has simply been superimposed upon it. In a time when brand new wooden floorboards already come with dents, the “Libertine” is morphing into a figurehead of a setting that suggests an ideal world; one you can book into for a few nights. Not that guests are left that much scope as everything has already been sown, harvested and eaten in this world. Sleep well! 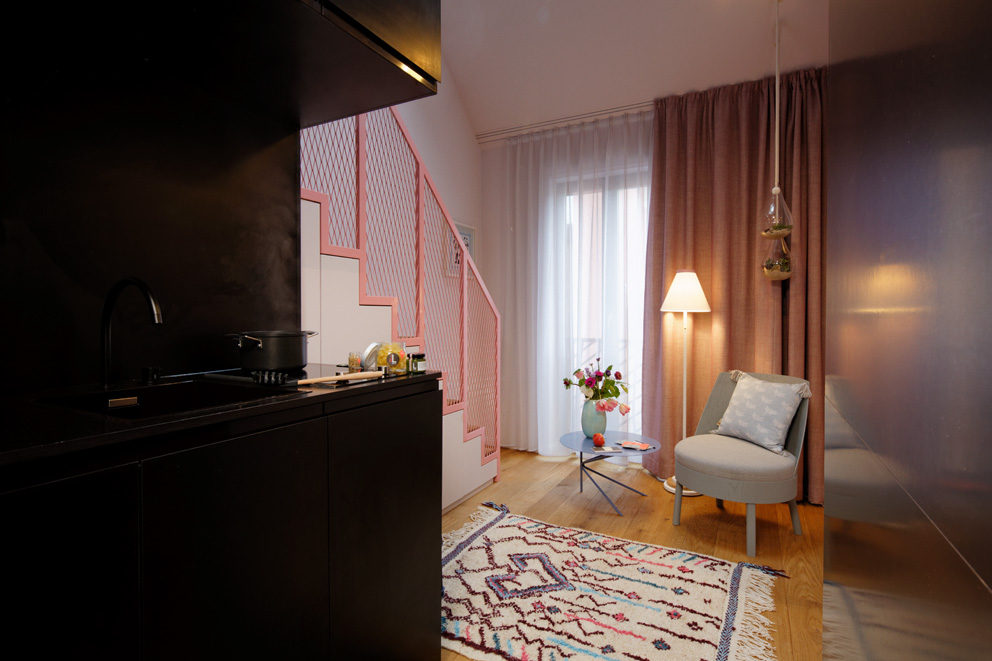 Rooms are based on a modular system: A sleeping area, a zone with armchair and small table and the “Black Box” with kitchenette and bathroom. Photo © Dieter Schwer

In the shared kitchen you can either make your own food or have something prepared by Peter, the hotel’s chef. Photo © Oliver Tamagnini

The ingredients come from the little store “Lekker”, which stocks products sourced regionally or from the hotel’s own “Permakultur” farmland. Photo © Dieter Schwer 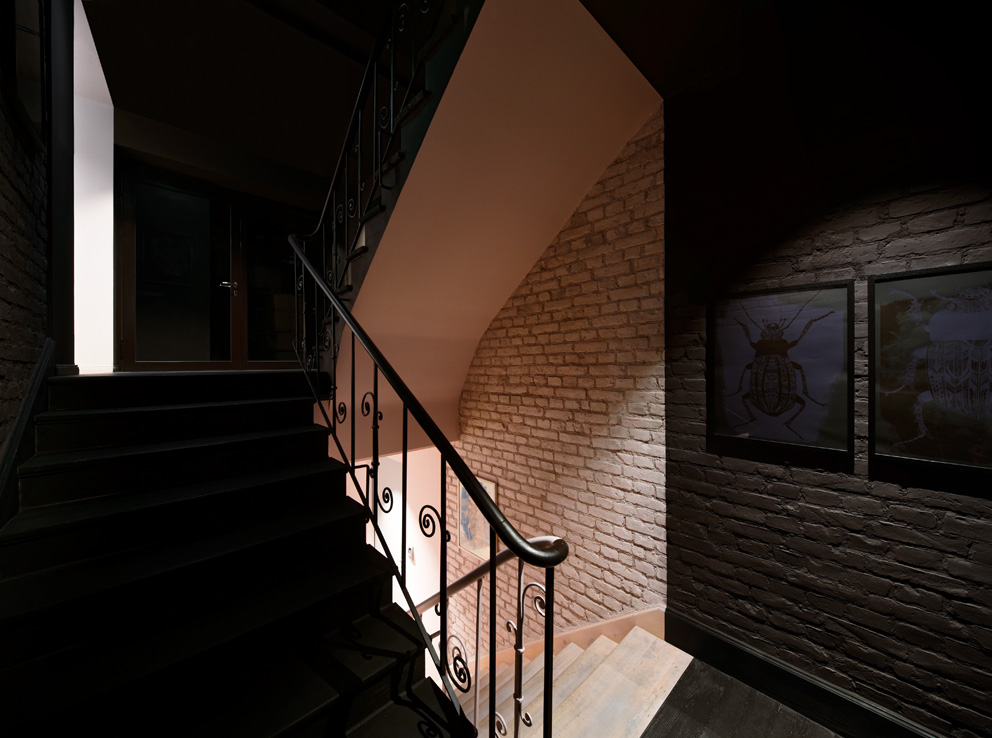 There is a stark contrast in all the rooms between a somber black and feminine pale pink. Photo © Dieter Schwer 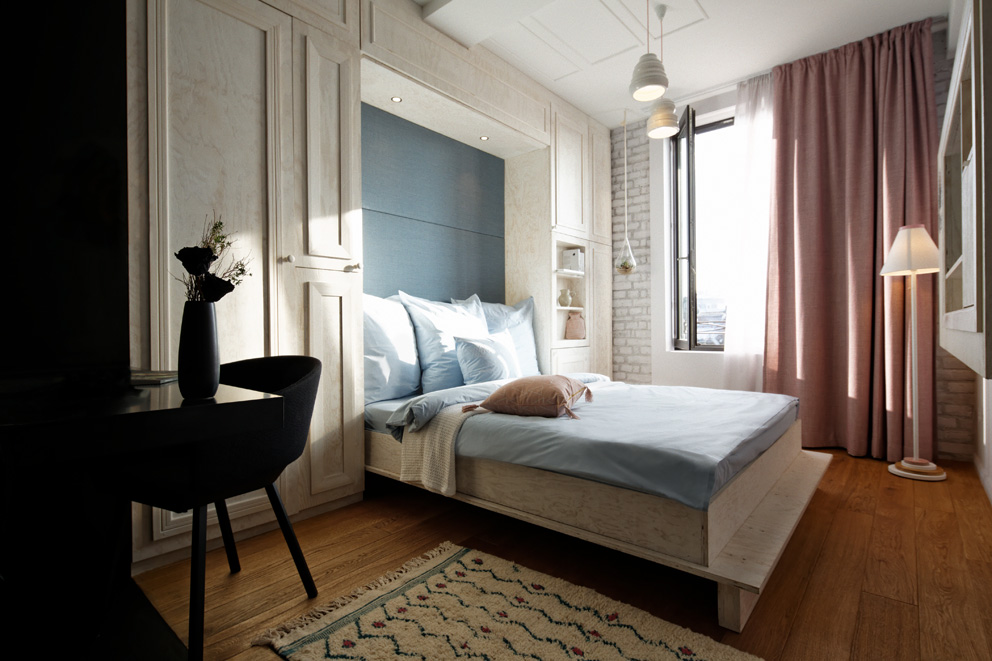 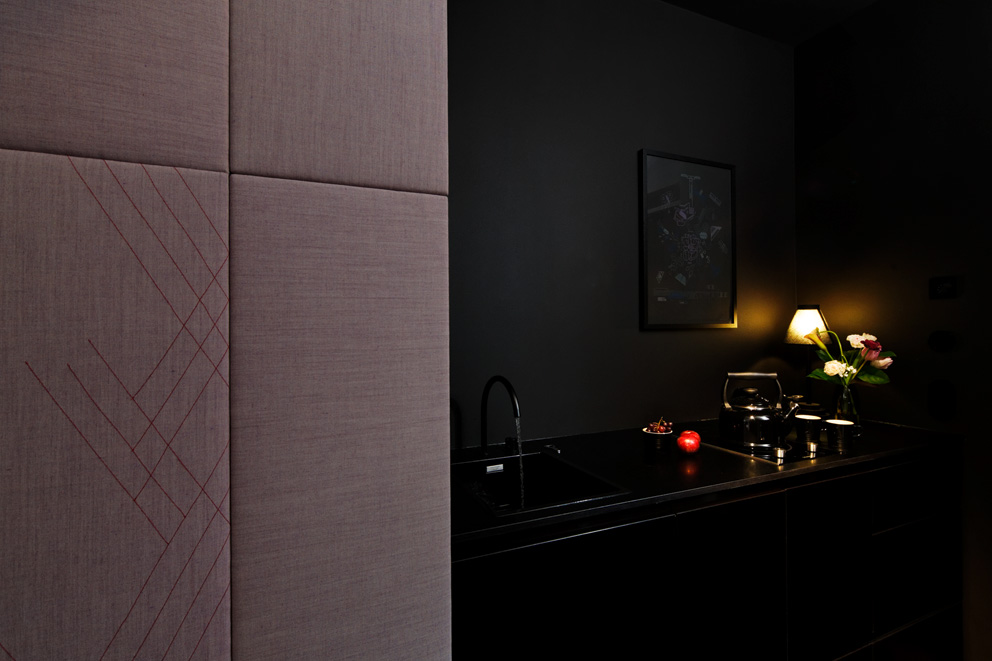 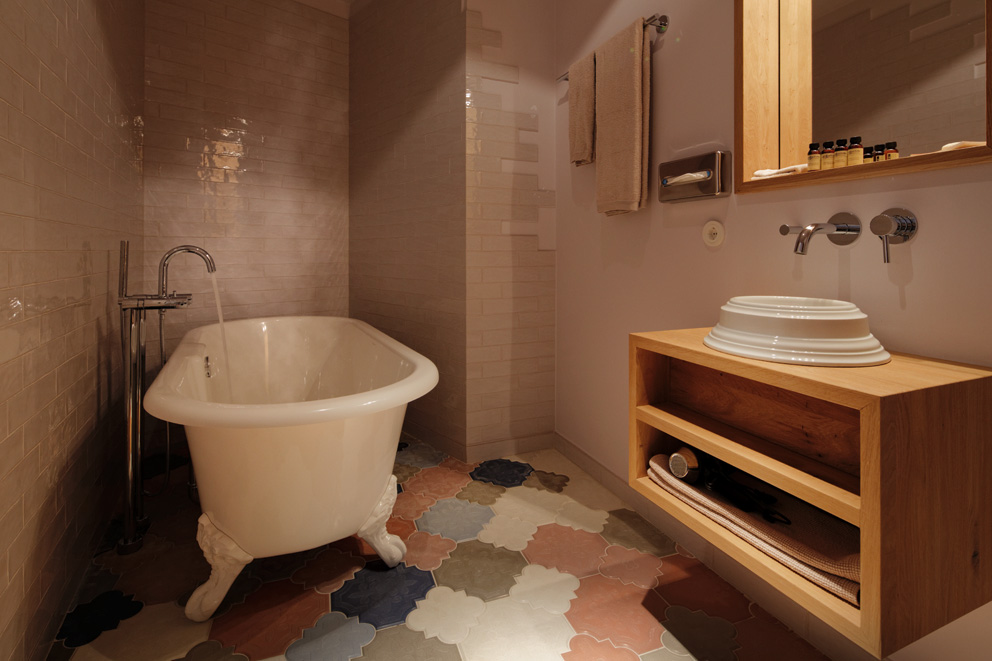 Concrete tiles produced by Hungarian corporation Ivanka: In the private suites, the bathrooms with their standalone tubs offer a small, calm wellness zone away from the lively tone of the common rooms. Photo © Dieter Schwer 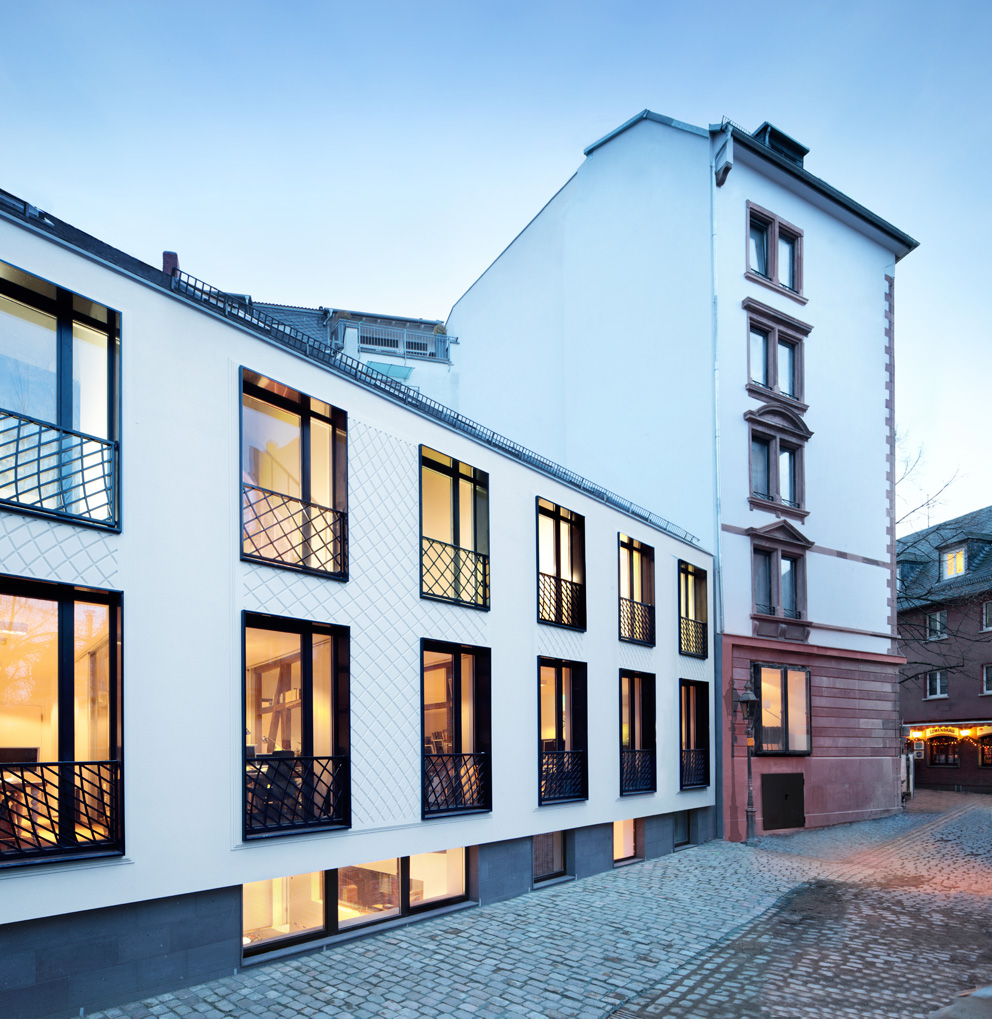 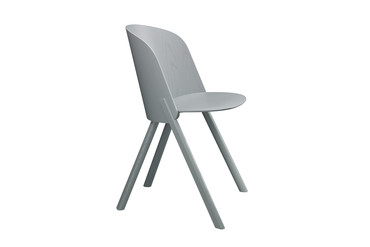 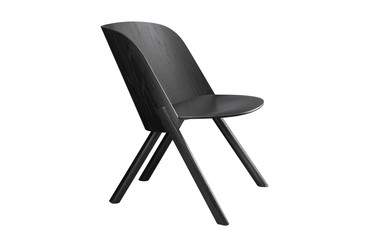 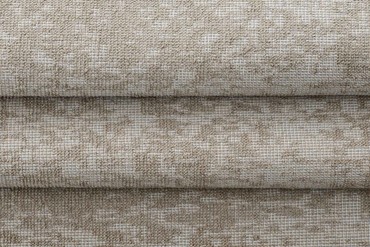 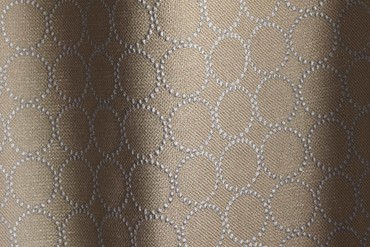