Who would not dream of owning a designer piece? It surely would be very nice to have an "LC2" armchair by Studio Le Corbusier, one of Mies van der Rohe's "Barcelona Chairs" or indeed a "Lounge Chair" by Charles and Ray Eames one day. But at what price? The "original" for several thousand euros or an imitation at a fraction of the cost? Copyists advertise their products with slogans such as "High quality and good price", "Design classics furniture in 1 week 75% off!" or "Even better than the original, directly from the producer from Siena, Italy". Yet: How much enjoyment will we get out of an imitation in our living room? What is the value of creative achievement, and how can we convey this value?

What makes an original in design? In the light of mass production, can such a thing even exist? In art history, which by nature is concerned with individual pieces of work, this is a much-discussed question that has many answers. From the point of view of furniture producers who collaborate closely with designers, the answer seems clear: What counts is the relationship between the designer and the producer. The designer should contractually grant the producer the authority to produce and sell his design; in return, he receives payment accordingly. In the case of products that are manufactured over a longer period of time, updates will often be necessary at some point, for example, when new technologies become available, when their use leads to functional improvements, or when standards change. The adaptations made to a design have to be realized in close cooperation between the producer and the licensor (the designer or his or her heirs). This is also the case when a product is reintroduced to the range as a re-edition after a break in production.

The term "vintage", on the other hand, refers to all products manufactured at the beginning of a product's lifecycle. If we are very lucky we might find the one or other piece at a flee market. Those willing to pay more can auction selected items in auction houses such as Christie's, Phillips and Wright. But not only the products themselves, also price lists and catalogs, which help us find out when products were available and what changes were made to the design, are traded at a high price.

Loopholes in the copyright

As is well known, the copyright protects intellectual property; however, there is a time restriction as this protection ends 70 years after the death of the author. If more than one author was involved, the date of death of the last surviving member is decisive. This means that design classics such as "Kaffeehausstuhl 14" by Michael Thonet, "Gartenstuhl" by Karl Friedrich Schinkel and "Hill House 1 Chair" by Charles Rennie Mackintosh are no longer copyrighted.

Depending on the product specifications, however, the intellectual property law provides further possibilities: Design patents protect a design's aesthetic form while other patents protect technological innovations. Moreover, three-dimensional trademarks demand a product's design to look original so that it will be remembered. The cultural relevance of a design must be proven extensively, for example, the product should be part of public collections, it should feature in exhibitions and be published in magazines, books and films. "Panton Chair" by Verner Panton, for example, is protected by such a three-dimensional trademark.

In this connection, the dispute at "Peek & Cloppenburg" caused the last big stir. The department store and fashion company bought the "LC2" armchair from Studio Le Corbusier to furnish its stores. However, the furniture had not been produced by Cassina but came instead from an unauthorized manufacturer in Italy. At the time, it was illegal in Germany to use unlicensed products in public spaces. The licensor sued and claimed for compensation on the grounds of copyright violation. The case was heard in the highest courts including the European Court of Justice where the appeal was upheld. As national courts are bound to the decisions taken in Luxembourg, the Federal Court of Justice has since been following this jurisdiction. Accordingly, the use of unlicensed products in public spaces in Germany is now allowed.

Designs done by Studio Le Corbusier, Bauhaus or in the style of Mid-Century Modern or Scandinavian Modernism are copied particularly often, with furniture by Le Corbusier/Jeanneret/Perriand, Mies van der Rohe, Charles and Ray Eames as well as Arne Jacobsen topping the list. A comparison: The online shop Smow sells licensed products by premium manufacturers. Here, the "LC2" armchair costs 2,625 euros, the Eames "Lounge Chair" 4,063 euros and the "Egg Chair" by Arne Jacobsen 4,849 euros. The prices at Bauhaus Superstore, which sells unlicensed products, are 849 euros for the "LC2", 1,150 euros for the Eames "Lounge Chair" and 1,980 euros for the "Egg Chair".

Producers of unlicensed products tend to justify their price policy by saying that designers themselves would like to offer their products at affordable prices. The Dimensione Bauhaus website quotes Le Corbusier: "We have to develop a less expensive edition for the (righteous) people who are not rich." Manufacturers of unlicensed products claim that they pass the costs they save thanks to slimmed-down distribution structures on to their customers. However, what they do not mention is that copyists do not bear the costs or risk of product development or market introduction, that they do not pay the designers or their heirs any royalties and that they do not invest in the development of new products.

The scale of product piracy varies from country to country. In Europe, especially in the UK and Italy, copyright is treated very liberally. Thus, the Milan Furniture Fair is at once a platform to present new products and a trading place for imitations. Due to the production costs copies are increasingly made in China – just think of the Guangzhou Furniture Fair. Here, names like "Le Corbusier", "Bauhaus" or "Aluminium Chair" are no longer linked to persons, eras or products, but are the generic terms for furniture types that come in a variety of shapes and forms.

On massively frequented sites such as Google, Amazon or Ebay, we find advertisements by Italian and English manufacturers who, as far as we can tell from the website, offer unlicensed designer products. It is indeed amazing that selling non-licensed products is prohibited in Germany, while at the same time it is permitted to use German-language websites as a marketing platform for unlicensed products. The website of "Stern" magazine draws a bizarre picture. Right beside the investigative article "Bauhaus von der Rampe" (Bauhaus ex-works), a report on occasion of a crackdown at Dimensione Bauhaus, we find two of the aforesaid Google advertisements by "Bauhaus Stars" and "Bauhaus Classics".

So, what's the difference between the originals and their copied counterparts? Often, copyists shy away from the high costs for an accurate realization of the designs, for example, because they would need to purchase expensive tools, because it requires a great deal of manual work or the materials would come at a high price. As a result, copies often no longer meet the common standards and safety requirements. To disassociate themselves from copyists, numerous premium manufacturers communicate the visual features of their originals, as is the case, for example, with Tecnolumen's "Wagenfeld Lampe". The lamp holder is made with own tools and has a nozzle for the pull cord. The surface is nickel-plated and develops a slight yellowish patina over time. The shade consists of a hand-blown opal glass. The textile cable is braided in black. The products have been tested by the Association for Electrical and Electronic Technologies and have the relevant labels and stickers.

Things become complicated when unauthorized producers get hold of original tools in one way or another. Modernica, for example, claims on its website: "Modernica is the official site for the George Nelson Bubble Lamp Collection. (...) In 1998, Modernica acquired all of the tooling and materials to begin production of this iconic series." There is no indication that Modernica in fact holds the license of the heirs of George Nelson. So how can we be sure that what we are buying is an original? First of all, we should take a look at the label. Second, we should only buy products from an authorized and specialized retailer. In case of doubt, it is advisable to directly contact the manufacturer by phone.

Many premium manufacturers honorably keep their action against copyists quiet, while some fight nail and tooth; yet others again raise awareness of the problem most charmingly. In the case of Cassina we find a few sentences on copyright under the heading "Authenticity". Vitra provides an entire article on the entitled "The Original" by company owner Rolf Fehlbaum. Fritz Hansen has a special menu item called "Fighting Copies" where he displays a whole host of shredded furniture copies and calls on customers to actively support the campaign against copyists.

Herman Miller has impressed us with elaborate awareness campaigns. "Beware of Imitations" – in 1963 the Eames Office designed advertisements and posters in the form of "wanted" posters. Pictures of different products by Charles and Ray Eames are complemented by arrows and lettering partly printed and partly sprayed and arranged on a brick wall. "Get Real", realized in 2007 as an exhibition, a short film and printed materials, shows a wide variety of objects that are considered particularly authentic. They are juxtaposed with "cheap" imitations and the slogan "Get Real". The campaign features not only furniture, but everyday items too: a Christmas tree with real needles as opposed to one made of plastic, a man with a bald head and one wearing a toupee, a real potato versus potato powder. Last but not least, Herman Miller has for many years been operating and continuously extending the microsite "Discovering Design". Similarly to an e-learning course, it teaches us about design history in the form of historic pictures, films and audio recordings.

While "Beware of Imitations" aims to protect individual products, "Get Real" raises awareness of the issue of "Authenticity", and "Discovering Design" teaches design history. These campaigns shine a bright spot among the dark quagmire of product piracy. For several decades, Herman Miller has consistently made use of designers' creative skills in order to discuss the subject of copies, originals and the history of design on a high level and free from prejudice. In an almost playful manner he points out ways and means to advocate the appreciation of creative achievement within the design industry. At least this communication strategy can be recommended for imitation. 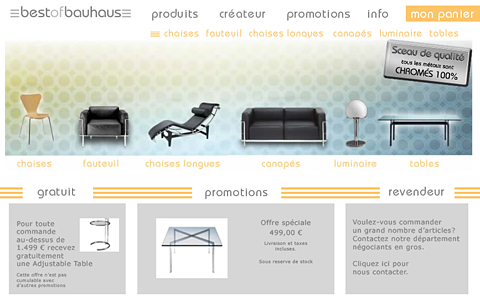 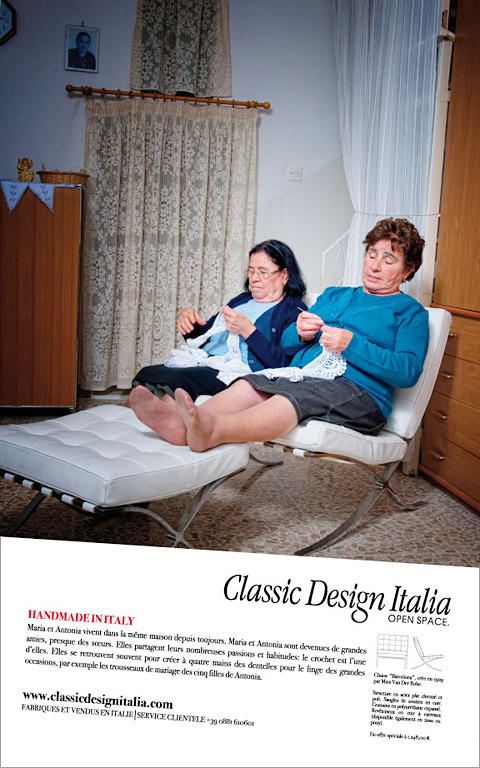 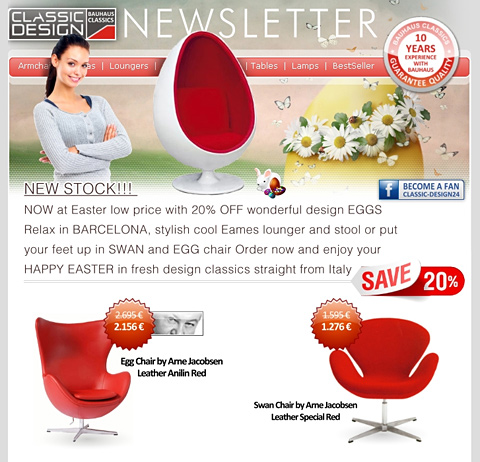 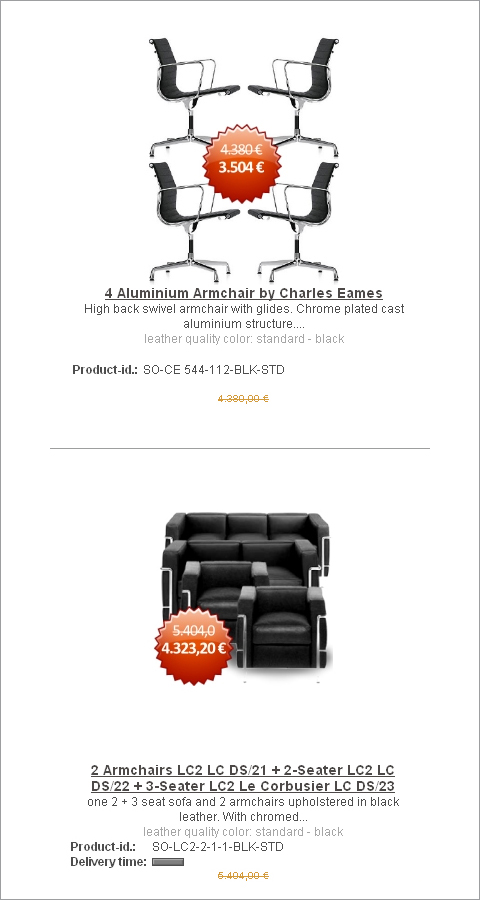 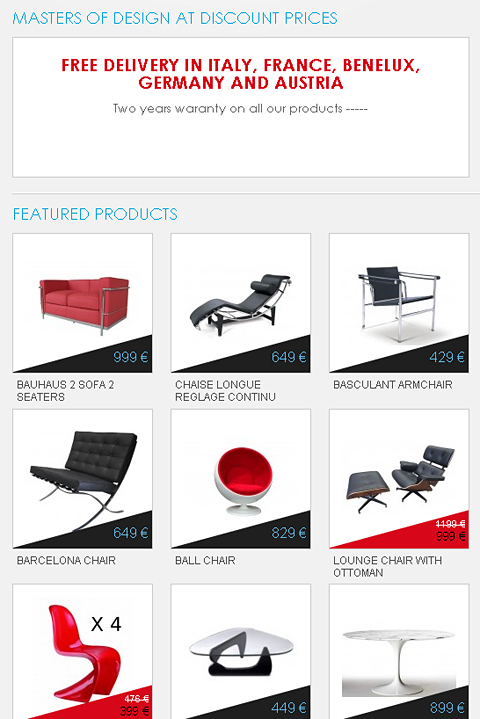 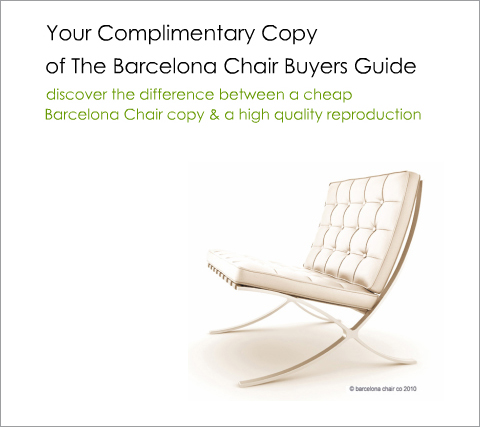