The symbolic is inherent in an event such as the Architecture Biennale in Venice per se. In Venice: a city that in a rather unusual location, both exposed and isolated at the same time, has evolved over centuries parallel to a complicated social structure, which in addition to all boundaries determined by courtly status and rank also bore a common social fabric in mind. In the field of architecture: a discipline that has accompanied political, social and technical developments throughout the years and still claims a central position in today’s society, at times even in its economy. Architecture that has probably sought out and effectively achieved distinction in its constructed form more often than it has succeeded in carving out something shared, something common, or indeed placed emphasis on a discursive openness. And so, such an event never begins without the burden of the past, of existing perceptions, even if the light and catchy title “Common Ground” may try to suggest otherwise.

Was it now the Biennale’s turn to seek out and find these common, shared elements in architecture? A visionary principle that binds architects around the globe like some kind of Holy Grail? Or was it more about discovering that which is dubbed public space but is all too seldom considered, planned, built and rebuilt as such? Because space alone is treated as a technical construct rather than another dimension to our society? These are just two intellectual avenues that one could take from the 13th Architecture Biennale.

Thus it soon becomes clear that this major event taking place at the Arsenale and Giardini can barely find a common thread, and perhaps it doesn’t even have to. When one finally sees the event for what it is, namely a marketplace, a vanity fair, an offering, the course through the national pavilions and the Arsenale’s halls certainly becomes easier, even if it doesn’t reach the heights of elatedness. The architects and consequently the positions that Biennale Director David Chipperfield selected for the exhibition are far too contradictory and often too well-known for that.

At the central Biennale Pavilion in the Giardini one is confronted with this aggregation, this erratic overlapping of possibilities even before reaching the façade. Alison Crawshaw’s installation “The Big Balcony” makes reference to the illegal construction and structural extension projects that she researched in Rome and in doing so addresses the striving of the individual to use space in a personalized way without statutory restrictions. However, the German Pavilion provides a prime example of how restrictions and subsequent detours do not necessarily have to lead to a loss or lack of something. Both theatrics and practicality led curator Muck Petzet and exhibition designer Konstantin Grcic to keep the mighty main entrance closed and modestly relocate the access door to the left-hand side. As a result the essentially symmetric sequence of spaces takes on a new, scattered feel – creating perspectives whose unfamiliarity is palpable as they present the selected architecture projects to the visitor. “Reduce, Reuse, Recycle” is the chord that constituted the curatorial keynote for the exhibition as well as the criteria used when selecting the projects to be exhibited.

But can an approach that takes regression and withdrawal as its credo preordain the way forward and essentially chalk out a different, better future? Muck Petzet speaks of an “architectural system of values” which, however, “diametrically opposes the self-conception of many architects, who strive for an ideal that has long since been eclipsed; namely, the architect as the autonomous creator of new worlds.” Although this congenial knock to the vain stance held by their ancestors is almost inefficacious at the Arsenale.

In the Pavilion, we are confronted with a collection of images and models of well-known projects and working methods, whose presentation lacks the tenacity to formulate clear standpoints or outline a new, uncharted perspective. How are models of façades that have already been seen countless times supposed to incite dynamic discussions surrounding the topic of replication in architecture? Can one even consider such a standard presentation of architecture as anything more than mere repetition? Whichever arguments one might like to put forward here – that the presentation does in fact play nothing more than a subordinate role in relation to the content or on the contrary that as an architect one should please provide clear arguments for one’s own standpoint on and indeed in architecture – the contributions to an international architecture exhibition should be able to find a means of expression that is in tune with the times.

This was demonstrated by the striking and certainly accomplished example set by Alfredo Brillembourg and Hubert Klumpner from Urban-Think Tank in their collaboration with Justin McGuirk, for instance. The “Gran Horizonte” restaurant to be found mid-way through the Arsenale provides a lively exploration of the “Torre de David” project, which formed the basis of the piece. Spread over 45 stories, a high-rise bank building in Caracas, Venezuela, a construction project that never reached completion, has now taken on a life of its own, something that was certainly not in the original blueprints. Unused spaces have been put to use, not taken possession of; life there is organized on the basis of a lively community. However, this is not an arrangement born of ideological conviction, but of a complete lack of alternatives to fulfill the everyday need for space. Perhaps the structures and communities that have evolved in this “vertical slum” could provide new material for an examination of how human co-existence could potentially work by making use of existing space in ever fuller, ever more cramped cities. It was therefore with good reason that the Biennale jury honored the work with the Golden Lion for the Best Project.

The Japanese Pavilion, which was awarded the Golden Lion for Best Pavilion, also addressed the question of possibilities. The exhibition of the “Home-for-All” project doesn’t seek to provide an ideal architectural constellation as a new beginning after the tabula rasa caused by the tsunami in 2011. It was not armchair theorizing that formed the basis of the plans and concepts for the redevelopment of the disaster area, but instead a pragmatic approach was initiated that fostered dialog on how architecture could provide answers to the fundamental needs of the people in the wake of such a catastrophe. How can we create places – common ground – where people can come together to eat, drink and tell their stories? To answer this question curator Toyo Ito brought decision-makers, architects and the authorities as well as previous and future residents together in a round table, where they would discuss the development of the building work. Can or indeed must architecture always be participatory from the very outset?

When architects create such direct responses, the architecture itself tends to take on a specifically political dimension. Yet this doesn’t necessarily have to manifest itself in real, constructed projects – quite the contrary. Boldly outlining the connections between the realms often suffices to illustrate the ways in which architecture is able to respond to social processes and is consequently able to intervene in these processes too. The Croatian Pavilion, entitled “Unmediated Democracy Demands Unmediated Space”, may have decided against presenting specific projects, but by superimposing moving imagery in the space the presentation is able to depict the processes that take place before an architectural work is created, highlight the social changes whose dynamics constitute the triggers, and put them up for discussion.

The fact that such arguments can hardly prove permanent but are instead subject to constant evaluation and classification in the sphere between apparent dependencies and hidden parameters is made clear in the Polish Pavilion. The neutral room painted in gray subjects our levels of perception to various shifts – both literally and figuratively speaking. The floor, which appears solid and as usual provides the basis for an understanding of the surrounding space, disconcerts the visitor with slight indentations, while a sound installation of voices and noises resounds from the ceiling and the room’s niches. When the familiar frame of reference begins to totter, new foundations and certainties are called for, and so, architecture can only create functional spaces when its use and function are continually questioned.

The Brits no longer question the need for change in architecture, but have instead used their pavilion to create a colorful bouquet of pretty ideas. But is this recollection of Oscar Niemeyer’s concept of standardized school buildings enough to make a new statement? Can such a recollection alone provide a sufficient impulse for change? The examination of the reputation of the architect provides a much more interesting angle here. Is it acknowledgment or despair that can be heard in the interviewee’s voice as he credits the architect with a kind of omnipresence?

Rotterdam-based studio MVRDV substantially curtails the role of the architect as planner in the “Freeland” development project, an experimental urban development concept. Planning should evolve freely from the initiative and needs of the individual. But does this mean that in the future the architect will lose his position as a trailblazing master builder and simply fall into the role of expert facilitator?

It seems that even the 13th Architecture Biennale has not been able to shed any more light on the grounds for architecture. This is not what a broad-based, confident assertion of one’s own position looks like. The bottom line is that they have probably raised more questions than they have managed to answer. The multitude of arguments and diversity of positions do however define a clearly recognizable field. But is it really “common ground”? 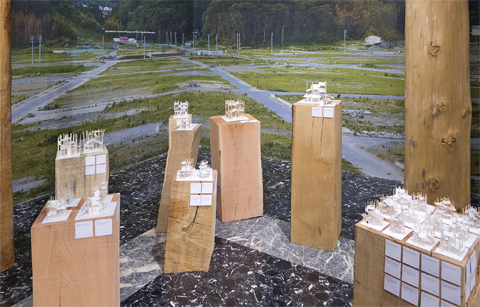 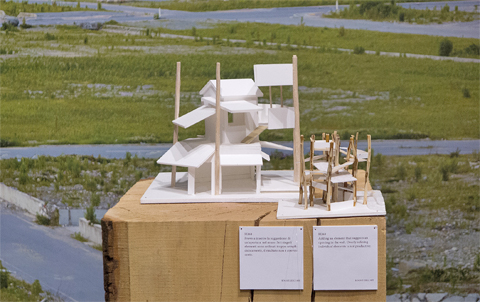 The project “Home-for-all“ deals with the situation in Japan after the tsunami in 2011; The contribution was awarded with the Golden Lion, photo © Jörg Zimmermann 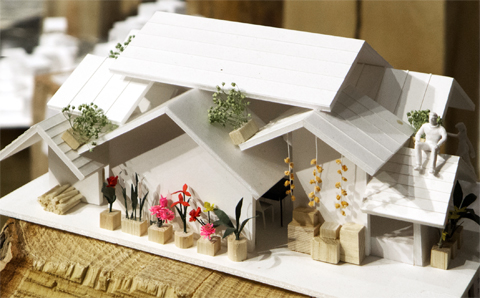 Much love for detail: Exemplary model from the “Home-for-all“ project, photo © Jörg Zimmermann 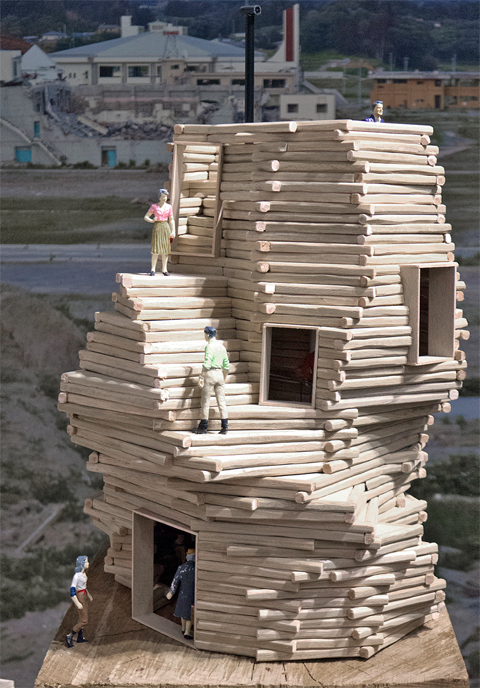 Contemporary architects present their ideas of how to rebuilt the Japanese cities that were destroyed by the Tsunami in 2011, photo © Jörg Zimmermann 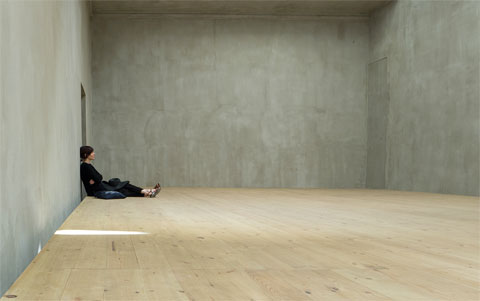 Making the walls quake as if they were dilating with the secret knowledge of great powers“ is the motto of the Polish contribution; the title originates from Charles Dickens’ novella “Dombey and Son”, photo © Jörg Zimmermann 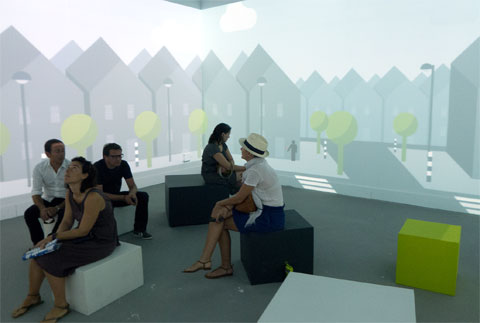 MVRDV defines the development of “Freeland“ as a liberal process that orientates on common needs; The role of the architect is strongly restricted in this experiment, photo © Jörg Zimmermann 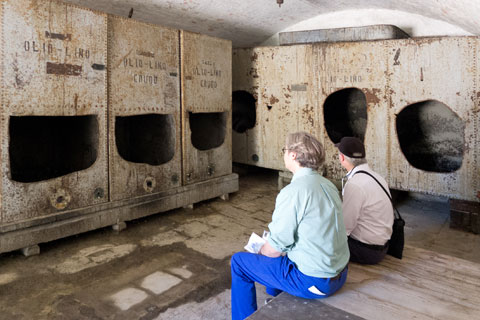 “Resonance of a space” is a sound installation at the outside area of the Arsenale; The sounds were recorded directly at the location, photo © Jörg Zimmermann 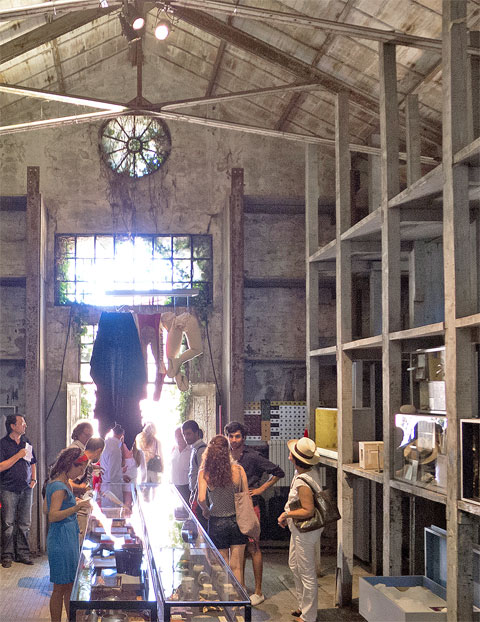 “Wunderkammer” by Tod Williams and Billie Tsien at the Arsenale, photo © Jörg Zimmermann 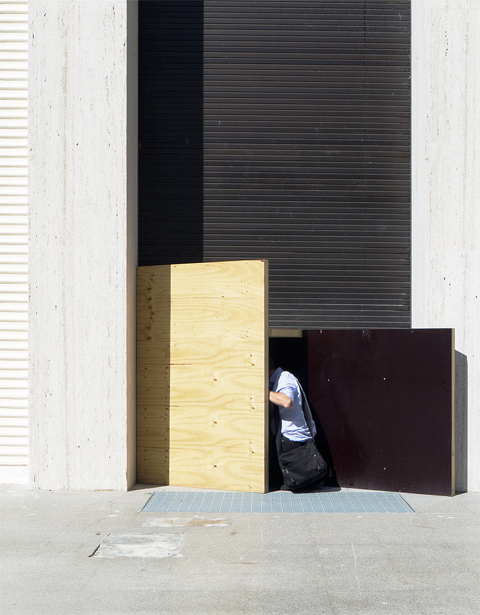 Bend down for architecture: Entrance of the Austrian pavilion, photo © Jörg Zimmermann 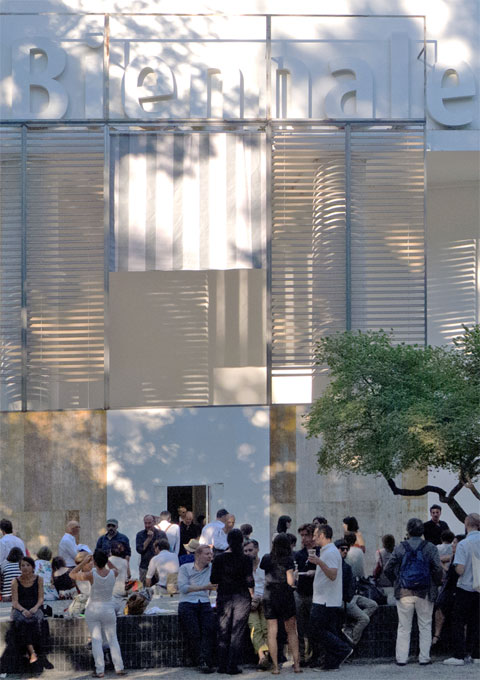 “The Big Balcony“ is a collage-like installation by Alison Crawshaw in front of the central Biennale pavilion, photo © Jörg Zimmermann 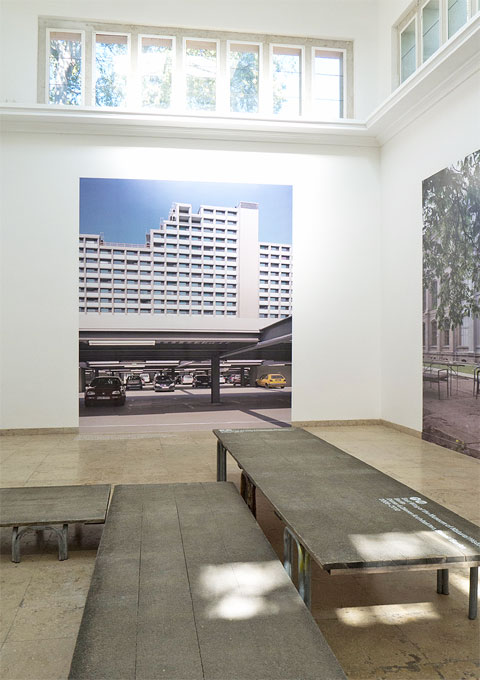 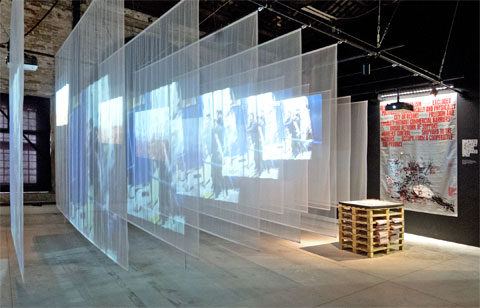 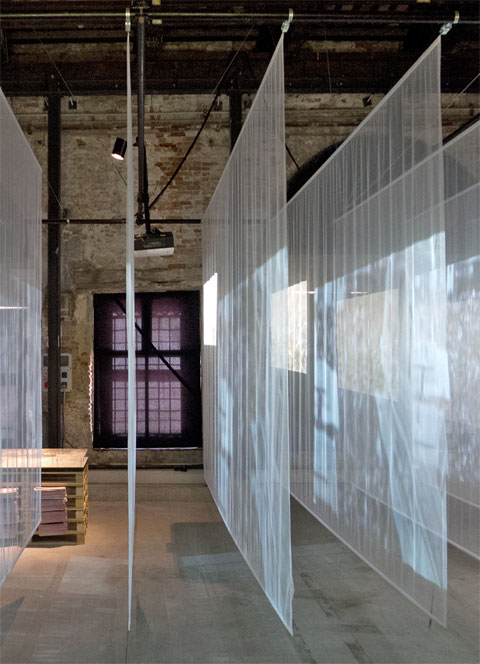 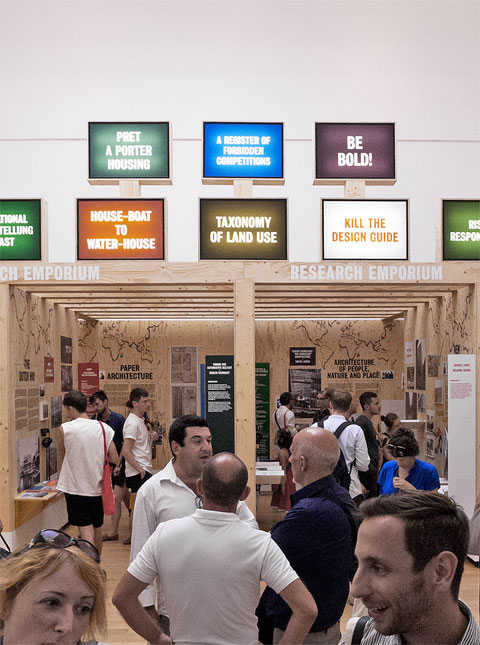 “Venice Takeaway” is the motto of the British pavilion, which is curated by Vicky Richardson and Vanessa Norwood, photo © Jörg Zimmermann 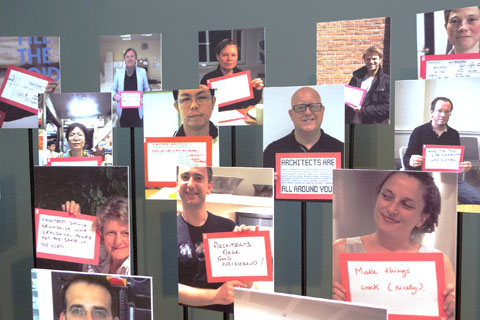 “Architects are everywhere“: Despair or recognition at the British pavilion?, photo © Jörg Zimmermann 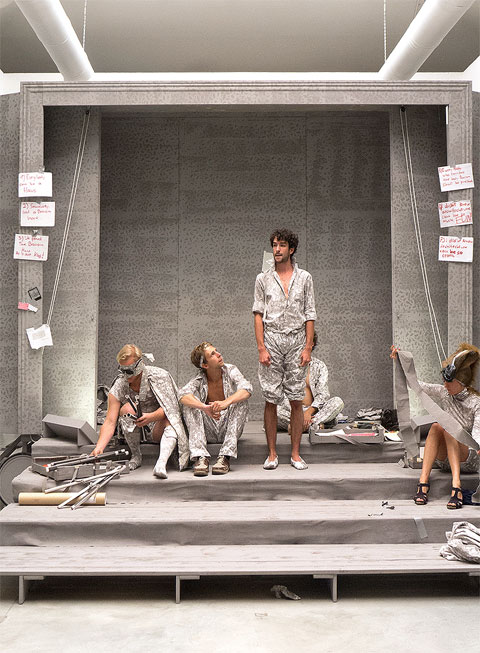 O & O Baukunst present the installation “Thespis Cart”, a wooden stage on wheels, which was used for a theater performance at the Pavilione Centrale, photo © Jörg Zimmermann 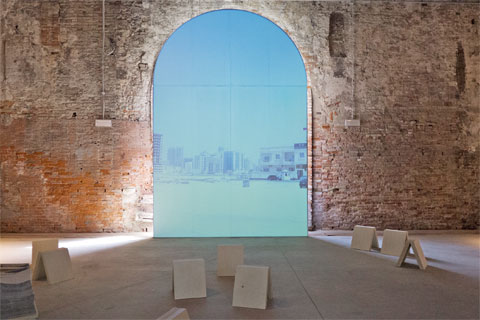 A window to Bahrain: The "Background" installation at the pavilion of the Kindom of Bahrain presents video recordings of urban landscapes on five screens, photo © Jörg Zimmermann
Advertisement