Desire is an important concept in the life and work of film director Luca Guadagnino. “There is nobody in the world you can’t get if you really want them,” says Guadagnino, citing Truman Capote, and explains that this desire matured in him early on and was “big enough.” His films “I Am Love” (2009), “A Bigger Splash” (2015) and the Oscar-nominated “Call Me by Your Name” (2017), the “Desire” trilogy, all revolve directly or indirectly around this aspect of human life. A native of Palermo, Guadagnino also works as an interior designer, another field into which he channels his understanding of the deepest human longings, his excellent powers of observation and his feel for settings. The recently opened store of Australian cosmetics manufacturer Aesop in Rome bears Luca Guadagnino’s signature.

These two certainly go together. Both address human longings, in very different ways. Both know how to tell stories – indeed, the manufacturer is named after the most important storyteller of the ancient world. Both pursue, uncompromisingly and rigorously, a path that has taken them to the top: Guadagnino is one of the most talented filmmakers in Europe; Aesop is now an undisputed high-end brand for beauty products worldwide. Aesop sells its “intelligent formulas” for skin, hair and the senses, whose external appearance calls to mind the sobriety and sterility of laboratories and which are not advertised with the usual cosmetics industry promises, only at selected places and in its own signature stores, which now number over 100 worldwide. To this end Aesop always collaborates with the best designers on site – which not only results in a unique design, but also draws the attention of the relevant target group.

This particular collaboration was the result of a chance meeting between Luca Guadagnino and Aesop founder Dennis Paphitis at Hotel Chateau Marmont in Los Angeles. The outcome can be viewed at Piazza di San Lorenzo in Lucina in Rome, the site of the first Aesop store in the Italian capital. The store’s design and choice of materials were inspired just as much by the plaza’s 12th-century Roman church San Lorenzo in Lucina as they were by the nearby Pantheon. Post-War Italy and Neorealismo also played a key role in the design of the store. Pasolini’s films and Moravia’s books portray the lives of simple people, their longings, their wants and also their oppression beyond middle-class society.

It is this juxtaposition of elegance and simplicity that characterizes the Aesop store in Rome. The ceiling features a veneer made of slices of straw bales, the fixtures are made of black marble and light-colored travertine, the floor adorned by a sumptuous hard coating. The sink, where visitors’ hands are washed upon entering the premises – an Aesop ritual, is freestanding and resembles a baptismal font. Thus here one is immersed in an almost religious atmosphere, one that corresponds to the brand attitude, which is informed by purity and asceticism. 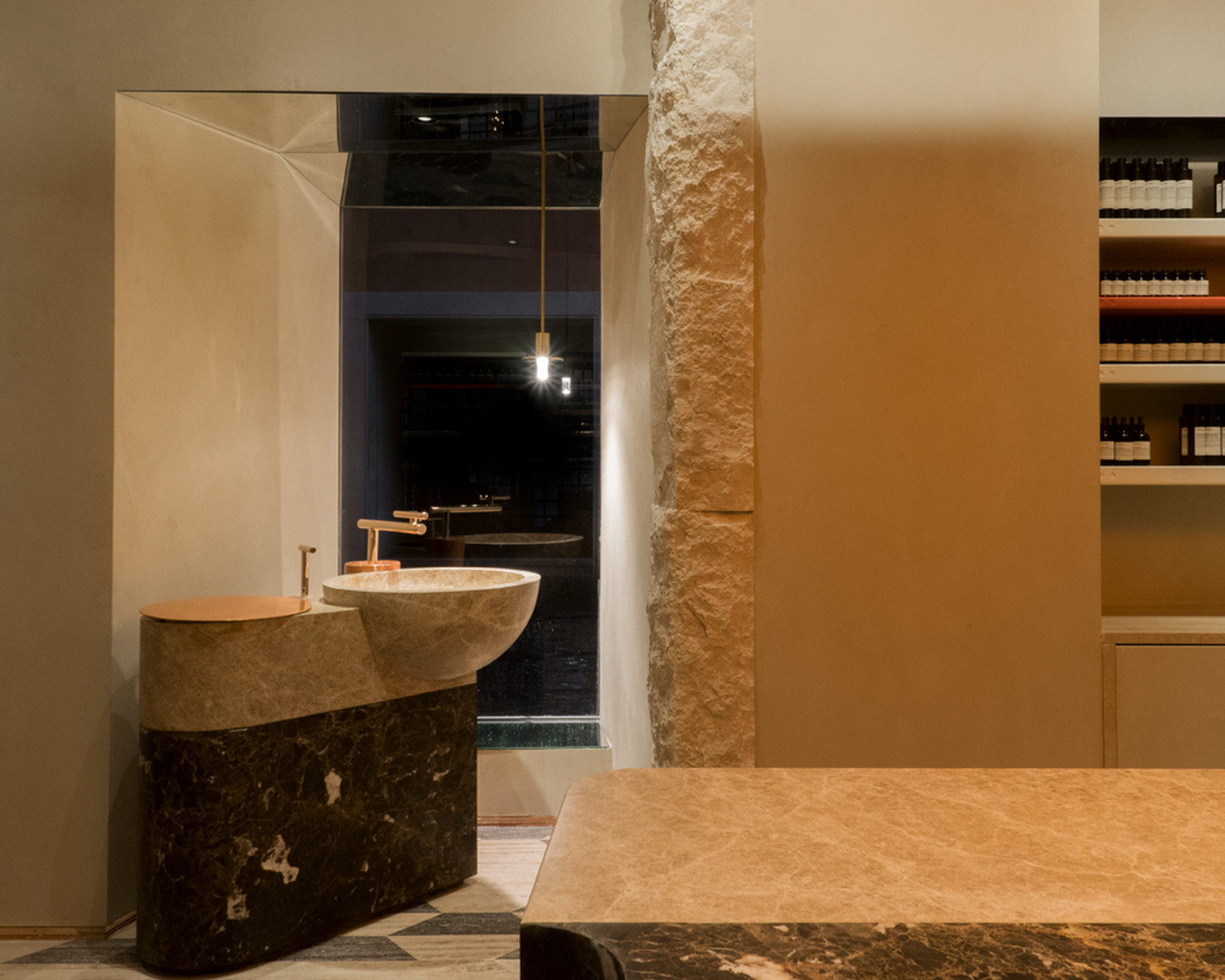 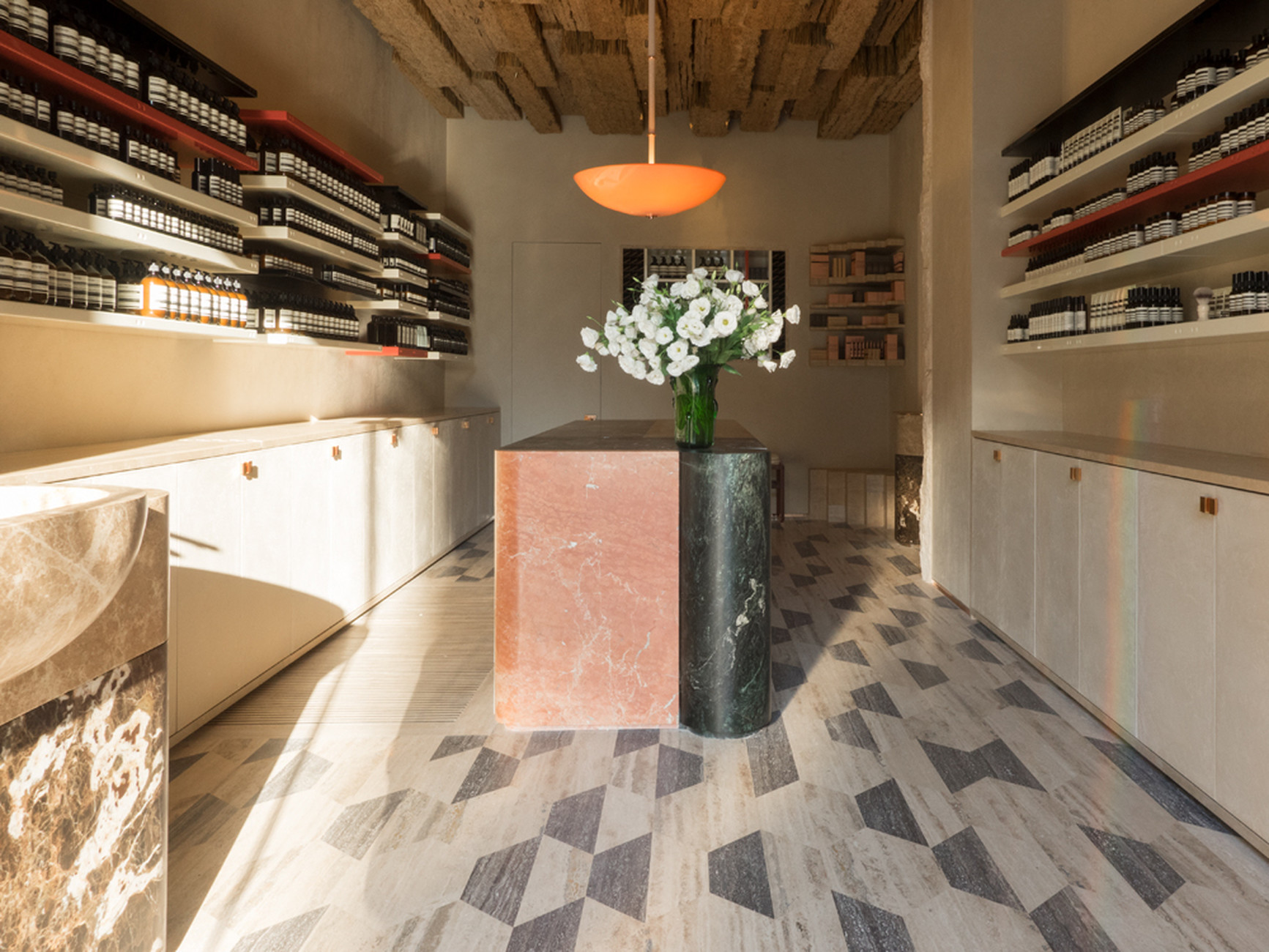 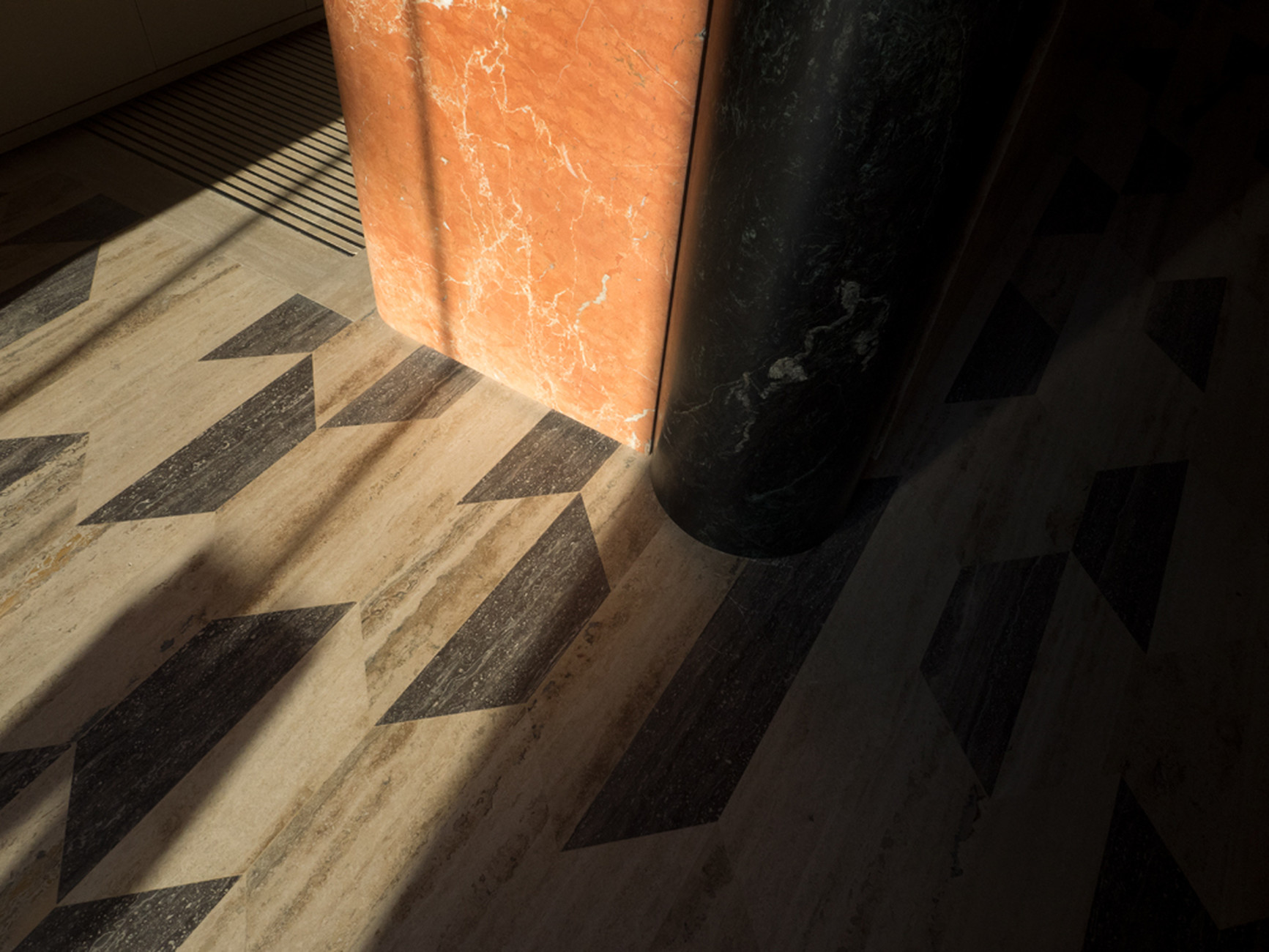 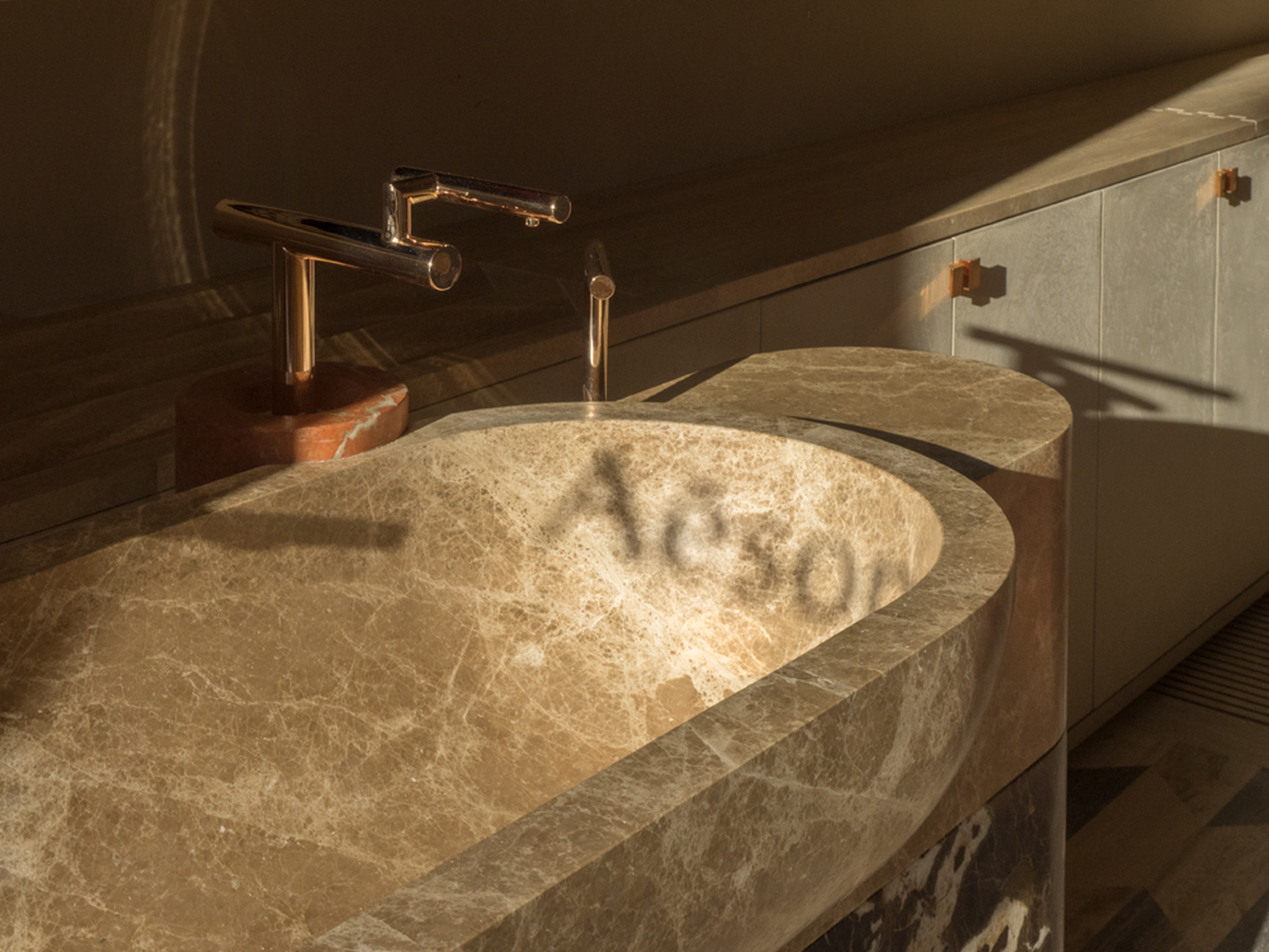 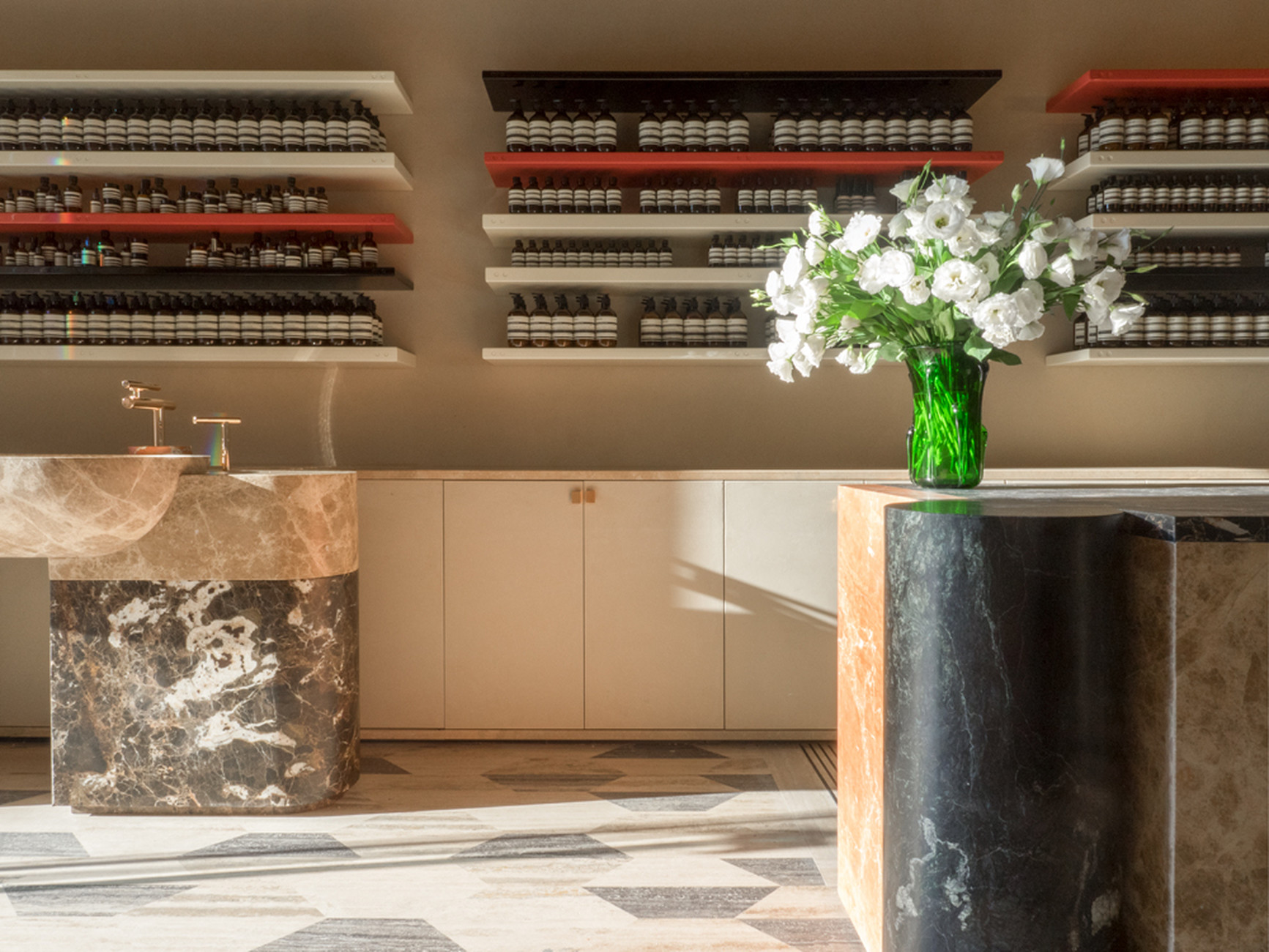 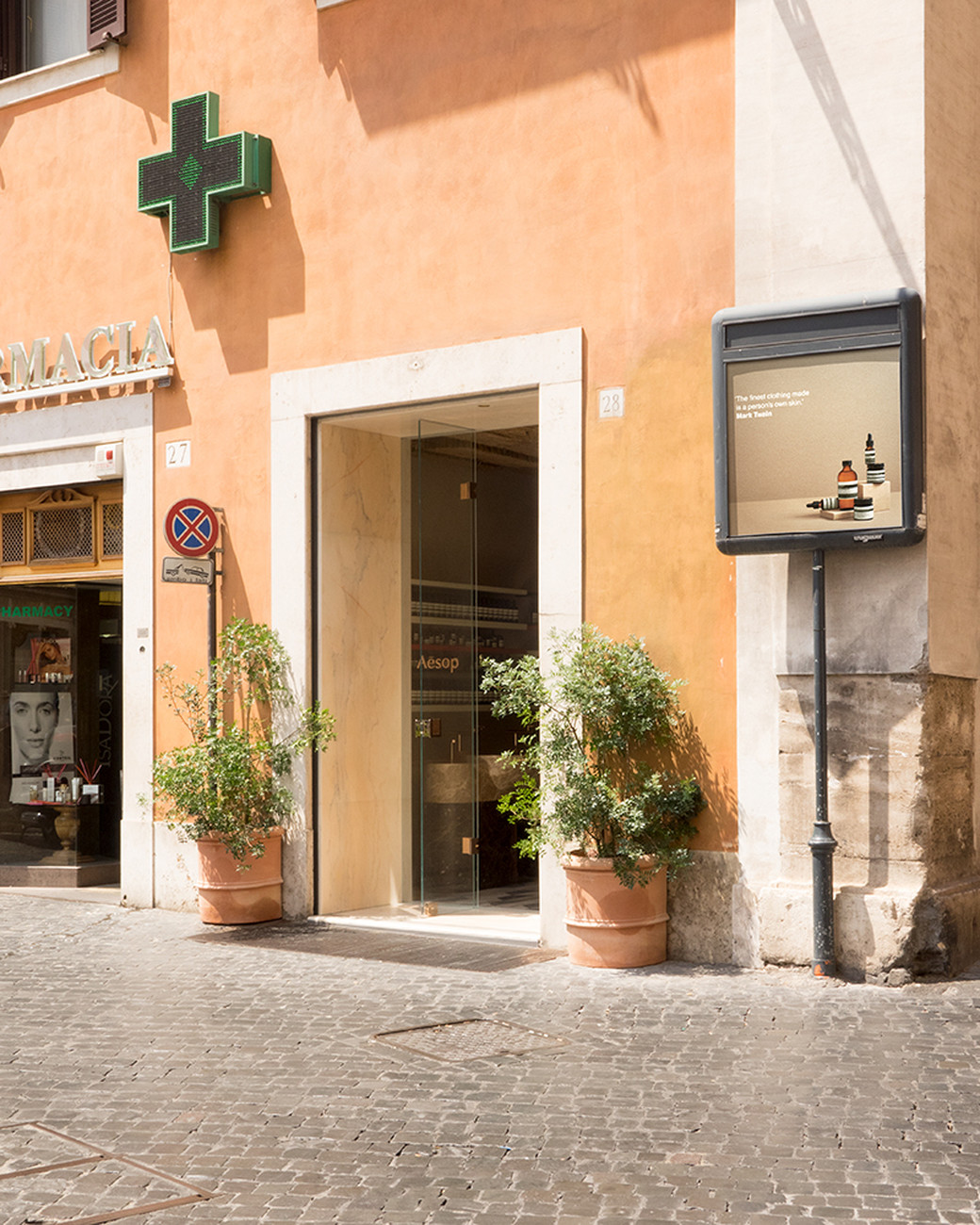 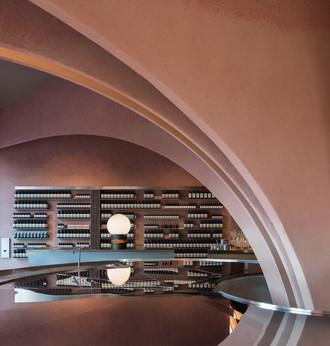 The architects at Snøhetta have created a convincing and very contemporary store interior for Aesop in London by drawing on a traditional architectural element. 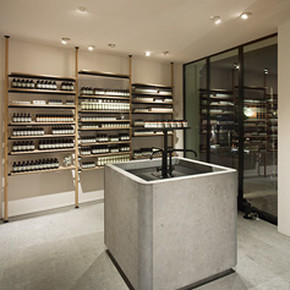 A global and forever recognizable brand combined with local architectural references. So how does that work? Cosmetics brand Aesop shows how – in its stores. 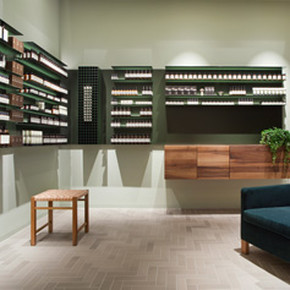 Australian cosmetics brand Aesop’s concept centers on a mix of global and local elements for the interior design of its stores. In Frankfurt, it was Philipp Mainzer who designed the store.
Advertisement