top
All in Mini or fashion is the car
Interview with Annette Baumeister
Aug 2, 2013 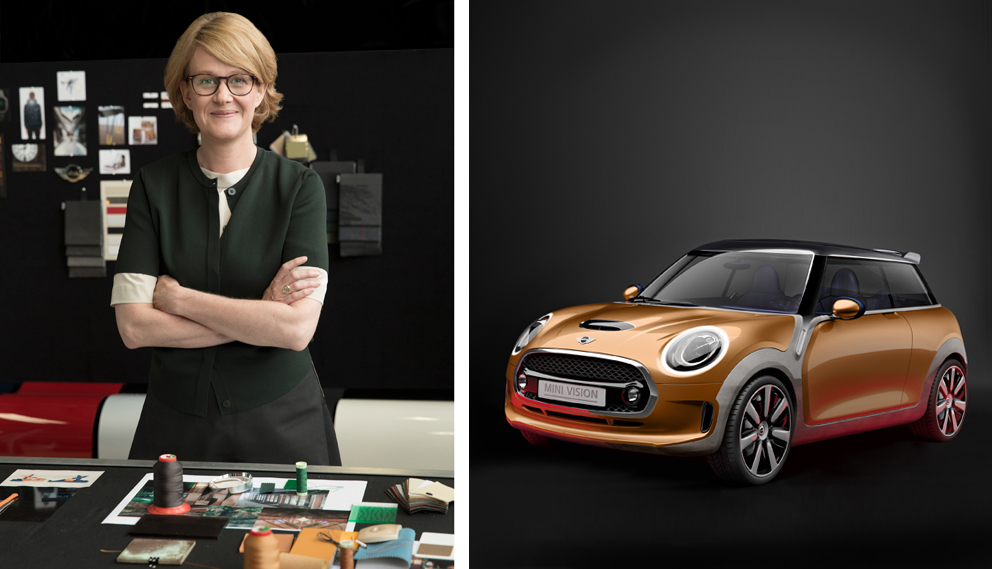 Annette Baumeister is Head of Colour & Trim at Mini and brings new fashion colors into play like for the new concept "Mini Vision". Photo © BMW Group

A visit to “Mini” in Munich. Adrian van Hooydonk, BMW Group Head of Design, invited some 60 journalists from all over the world to tour the Mini Design Team office at BMW’s headquarters because he wanted them to get an idea of Mini’s “heart” and a greater sense of what the Mini designers think and do. Alongside Anders Warming, the Dane who is Head of Design Mini, Oliver Sieghart (Head of Interior Design Mini) and Annette Baumeister (Head of Color & Trim) are the other two persons in charge of the Mini’s outfit. Stylepark’s Martina Metzner spoke to Annette Baumeister, a graduate in textile design, on new light construction materials, fashion colors and the “Mini Vision” concept car that has just been made public.

Martina Metzner: What’s right at the top of your agenda when it comes to advancing the Mini?

Annette Baumeister: As we all saw when the “Mini Vision” was presented: lightweight construction materials. Meaning materials such as so-called “organo sheets” – they’ve become possible in the first place thanks to new technologies. Organo sheet is not just a lightweight material, it also looks great, has a marvelous texture, and almost has a textile feel to it. Which is why we are glad to include it in the mix with other materials.

At the “Mini Vision” presentation there was a lot of talk of the Mini “Heritage”. And repeated use of the word “icon”. What does that all mean as regards the choice of materials?

Baumeister: We are trying to emulate the old Mini feeling, by using clean pure sheet metal or occasionally wood. Wood never completely disappeared from car-making. But it is now being reinterpreted. It’s precisely the classical materials that are undergoing a revival, albeit in a new guise.

More than other autos, the Mini emphasizes lifestyle. What ingredients do you and your team think go to make up the Mini lifestyle?

Baumeister: Take the special Mini Bond Street edition. There what counts is primarily the detailing. We at Mini love details. So we toy around with a cappuccino brown as a highlight, on the rear mirrors, the hubcaps, or as “piping” on the seats. It may not be magic, but it works! We take a theme as the basis of things, which is pretty like you do with a fashion collection. Such as “Bond Street” – and then go to work on the details. In another Mini, the choice may be the pattern of a Union Jack on the seats. We really concern ourselves closely with such themes and they elaborate on them down to the smallest detail.

You studied textile design. How much fashion goes into a Mini?

Baumeister: Masses! Mini stands for color, for trends! As regards fashion we take our cue from the modern classics. We’re not strident or garish. Which means we go for British classics such as Paul Smith or classic patterns such as Tartan or herringbone, but tend to interpret them with new, fresher colors. Or we go for a mix of patterns. Whatever we do use has to have an English touch, however. And must have a high-grade appearance.

Red-and-white was the classic color combination for the old Mini Cooper. What colors stand for Mini today?

Baumeister: If you go to England, you’ll see countless bright blue or bright red Minis. Some of them with a Union Jack on the roof. The Germans essentially prefer more subdued colors. “Pepper White” is one of the tones you’ll a lot on German roads. Or there’ll be colorful highlights such as a roof in “Chilly Red” for the Mini John Cooper Works. “Chilly Red” is associated with Mini an awful lot. Now personally I’d like to see newer colors, such as “Iced Blue”, you know those ice-cream colors that aren’t too clear, but have a tad of grey in them, stand for Mini.

In auto design, are there certain colors that count as “masculine” or more “feminine”?

Baumeister: No, I wouldn’t necessarily say so. We don’t design for specific target groups, but for a whole host of different people. We usually design the colors to go with the character of a car, quite irrespective of what color is just in trend. It doesn’t matter an iota whether a greenish yellow or a greenish red happens to be ‘in’ – well, at the moment neon-ish colors are all the rage. But you can’t get such colors in fade-resistant pigments for the car paints – and neon would be too fashion-freaky for us anyway. A “burned orange” is a bit more like what we want.

And what colors does your own Mini have?

Baumeister: I must admit that for the first time in a long while I’m going to be driving a black one.

In recent years, matt paints have come into play. Are there now such versions available for Minis?

Baumeister: BMW is very successful is that regard. But it aces quite different conditions. We at Mini work with shapes that look far better when coated in gloss paints. Take the upper edge of a Mini door, for example: It’s rounded and the refraction of light in the paint makes it look especially round. Which is why I never felt the urge to use matt paints. Not that the Mini doesn’t have flat surfaces, such as the roof or the wheel rims.

Where else do you go for color, other than the body that is?

Baumeister: On the décor areas in the interior, along the seams of the upholstery. Essentially wherever the eye often gets caught. And where we can create small highlights using color.

Adrian van Hooydonk and Anders Warming repeatedly point to the iconic design of the new Mini, which first hit the roads in 1999. There’s also an old Mini Cooper here in the design center. Have you got something of an in-house collection, an archive where you can study Mini design?

Baumeister: There are various sources, such as the plant in Oxford in England where we can learn all sorts of things about the Mini’s history. Our whole team once went there. Here in Munich we’re constantly expanding the archive, where we also keep various MINI Classic models.

So a brief word on “Mini Vision”. What par did you play in developing it? What did you want to try out?

Baumeister: First of all it bears saying that we make use of a completely new type of presentation for “Mini Vision”. For the first time we’ve elected to present a visual 3D model rather than a model car. And the topic of organo sheets, meaning lightweight construction materials, was also new for us. Another innovation: designing from the inside out. Meaning there are materials that are used both in the interior and for the car body. Organo sheet being precisely such an example. It is used for the interior trim of the doors and then moves outwards, across the wing mirrors through to the hood. 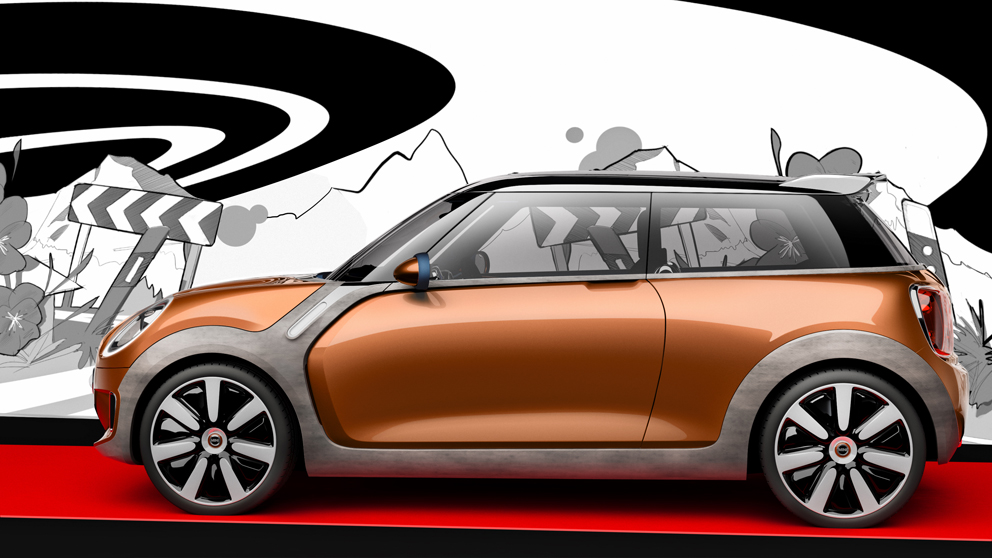 The concept-car "Mini Vision" shows more dynamic in the design - but remains at the iconography of the new Mini. Photo © BMW Group
Advertisement