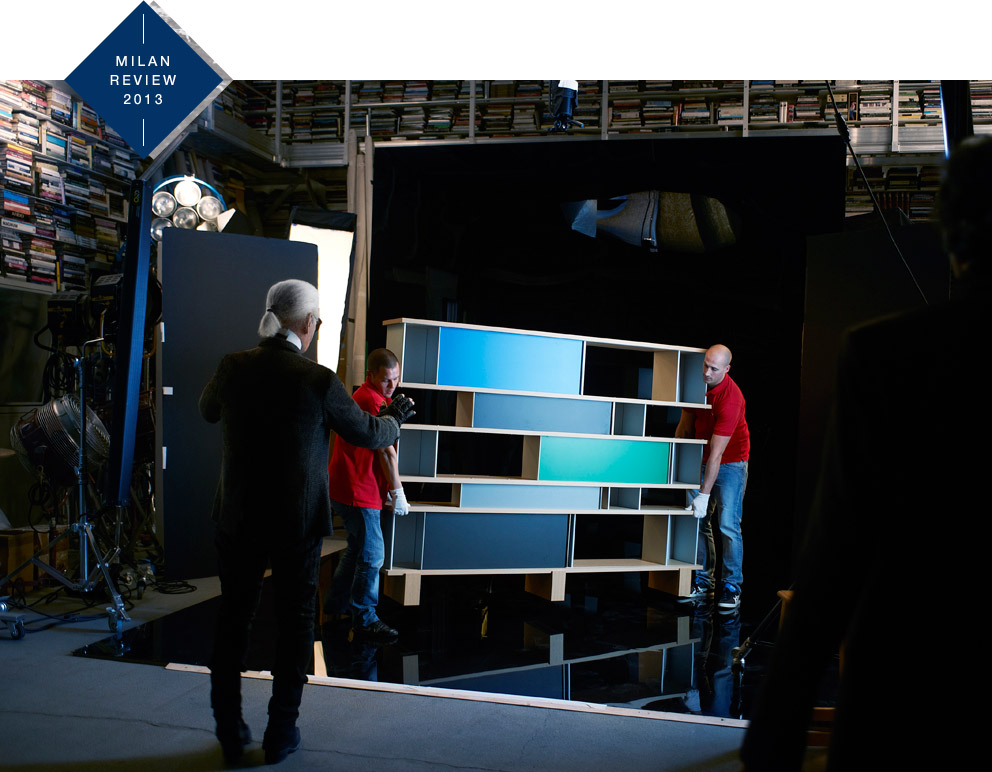 Caution! Karl has to get used to this kind of a model. „Nuage” bookcase by Cassina. Photo © Karl Lagerfeld for Cassina

Cassina certainly pulled out all the stops in its celebrations for the company’s 85th anniversary. On the Tuesday evening of Design Week, the manufacturer invited visitors to the presentation with Karl Lagerfeld. In celebration of its anniversary, the company gave itself a very special gift – a collection of the manufacturer’s furniture classics photographed by Karl Lagerfeld himself. And the result is simply striking. That fashion and furniture spring from similar biospheres and have a way of reaching their audiences is well known. Now, Lagerfeld demonstrates superbly how a synthesis of the two can lead to aesthetic perfection. With his trained eye for elegant silhouettes, ordinarily focused on bodies alone, he arranged the selected classics by Cassina in a strict, iconic style: Gio Ponti’s “Superleggera” chairs are wildly cast on top of one another like dice, Jean-Marie Massaud’s “Aspen” sofas are turned on their heads, and Le Corbusier’s wooden “LC14” boxes are stacked up to create landscapes reminiscent of an urban skyline.

However, there is one image that proves particularly emblematic: Karl arranged two fluffy, monochrome “Tre Pezzi Wool Chairs” by Franco Albini on top of each other in such a way that they appear to melt into each other like yin and yang. Black and white – a marriage made in heaven. A combination that once raised Coco Chanel to the higher echelons of the fashion world. And Karl Lagerfeld has been continuing this success story for years since.
Now, exclusively for Cassina, he has dared to dip his toe into the pool of furniture design for the very first time, or so they say. Reinterpreting classics is something that comes easy to Lagerfeld; it seems to be something of a calling for him. This is abundantly evident in his photographs for Cassina. Naturally, the images do reveal his origins as a fashion designer – and not least as a fashion photographer (the very first station of the now 75-year-old’s career in the sartorial world).

For those with a penchant for extravagance, there is another exhibition by Karl Lagerfeld in Milan, this time on Chanel’s “Little Black Jacket”. The all-rounder is presenting the 113 photographs he premiered last year together with Carine Roitfeld, former editor-in-chief at French Vogue; and that in the Rotonda della Besana, a striking building with a sublime, circular colonnade on the outskirts of Milan. The collection depicts the designer’s reinterpretation of the fashion classic, designed by Coco Chanel in 1954 and presented here on the backs of celebrity “coat stands” such as Sarah Jessica Parker, Jane Birkin and Lily Allen. The images staged with Yoko Ono, Uma Thurman and Charlotte Casiraghi are particularly impressive, to name but a few.

But ultimately this was an evening with Karl, the man. Despite the rush of people, we were even able to get close to Karl and exchange a few words. What a surprise that he is in fact so approachable, much nicer than the media portray him to be, where he is all too often depicted as a master of self-staging with a good portion of conceitedness on the side. But in the end this makes him all the more impressive in person. Such that when he finally mentions that he has never read one of the Stylepark Newsletters, we just can’t bring ourselves to hold it against the Parisian design genius with the ponytail and glasses. 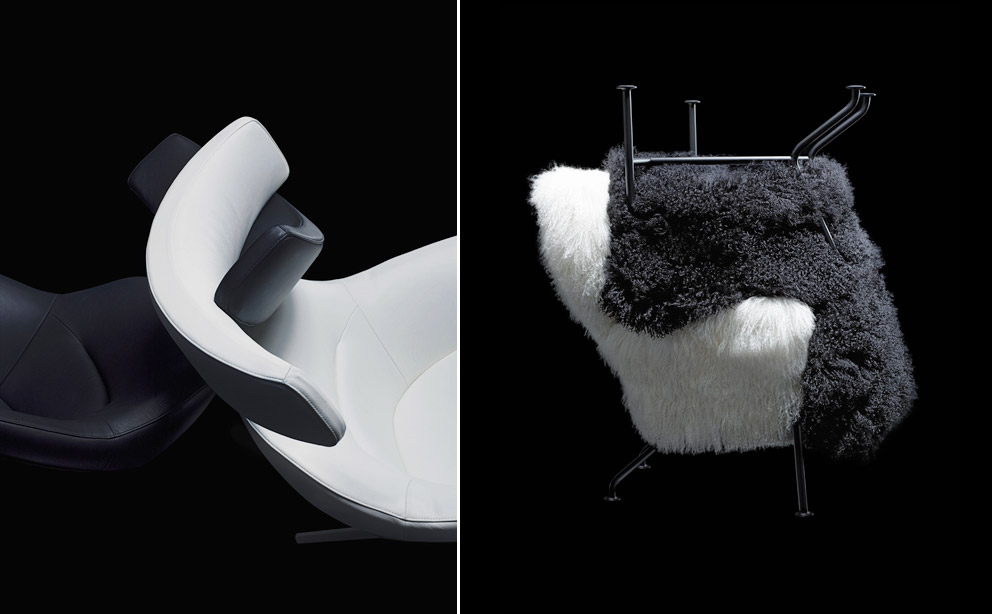 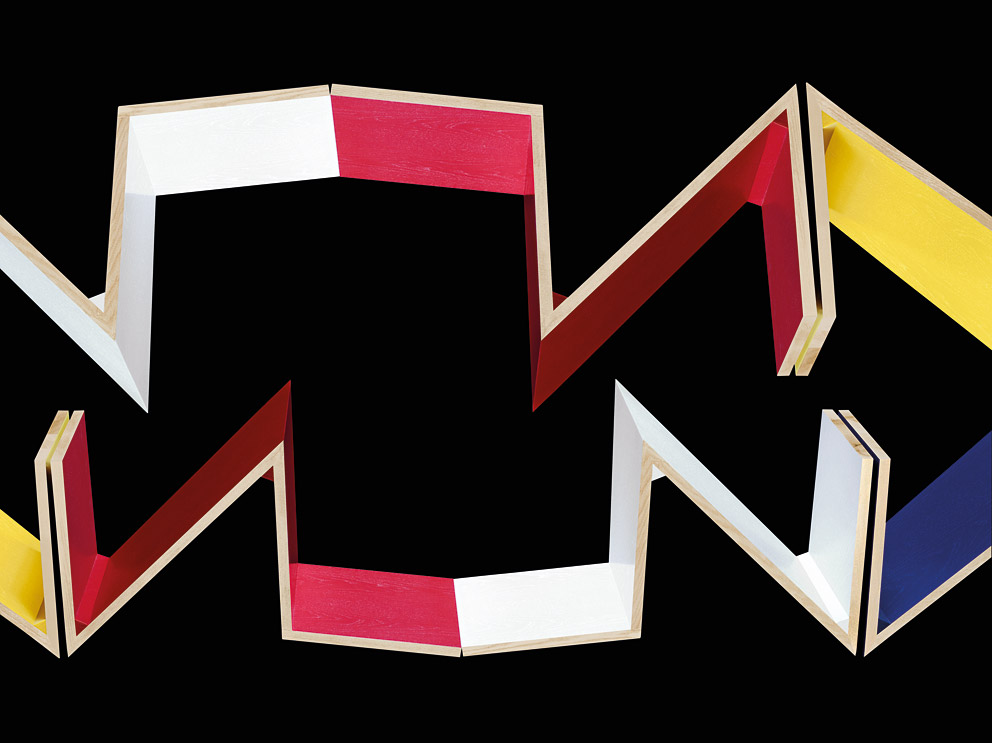 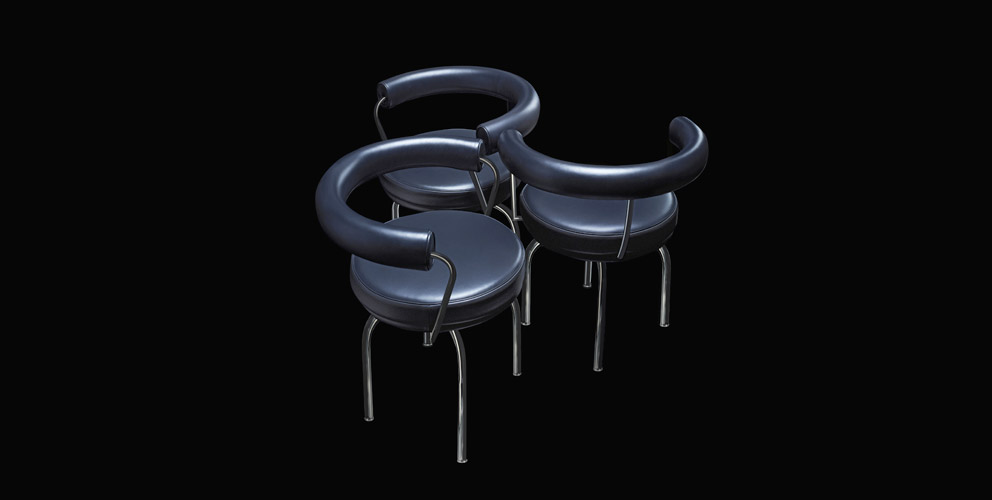 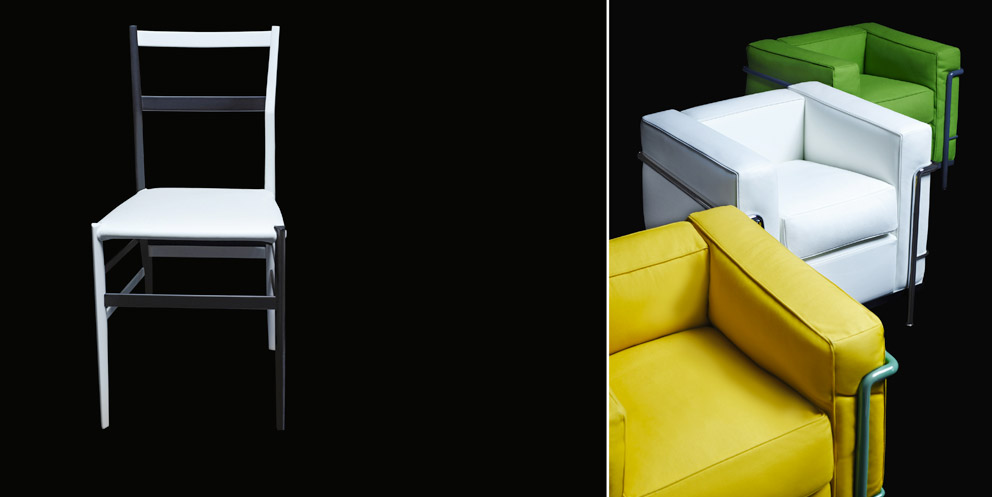 Black? Or White? The „Superleggera” by Gio Ponti and new colored, the “LC2”. Photo © Karl Lagerfeld for Cassina 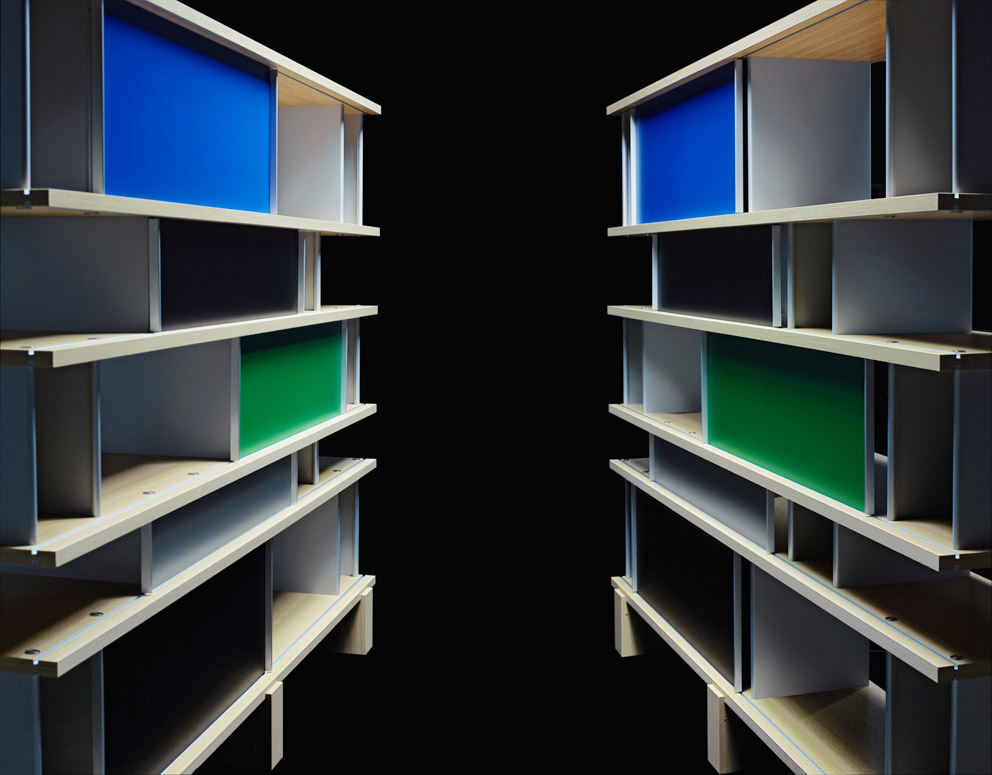 Point of view. Of „Nuage”. Photo © Karl Lagerfeld for Cassina 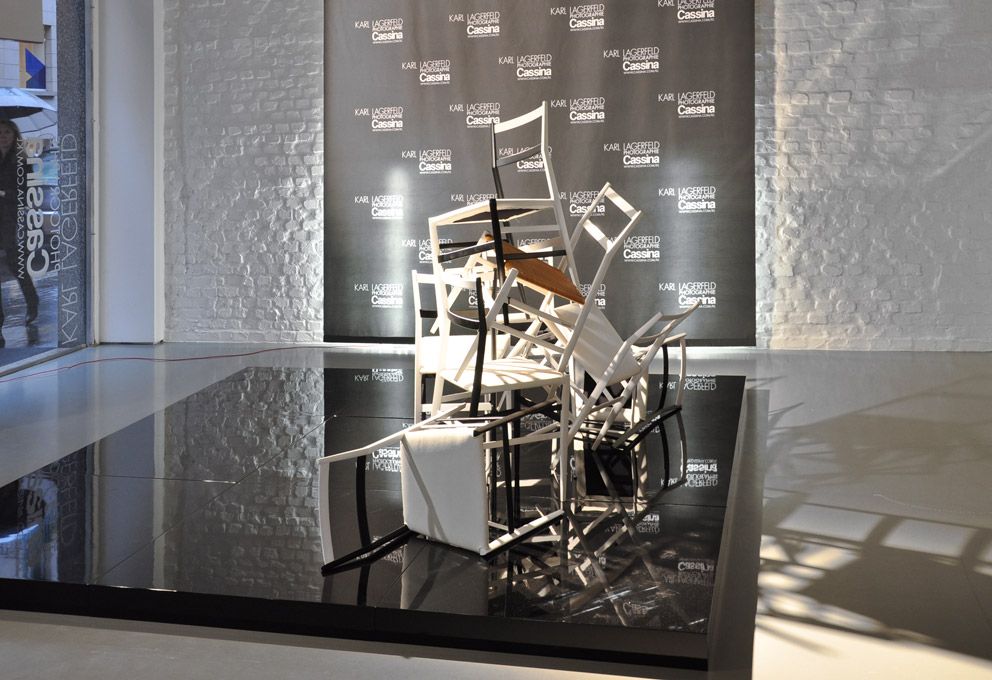 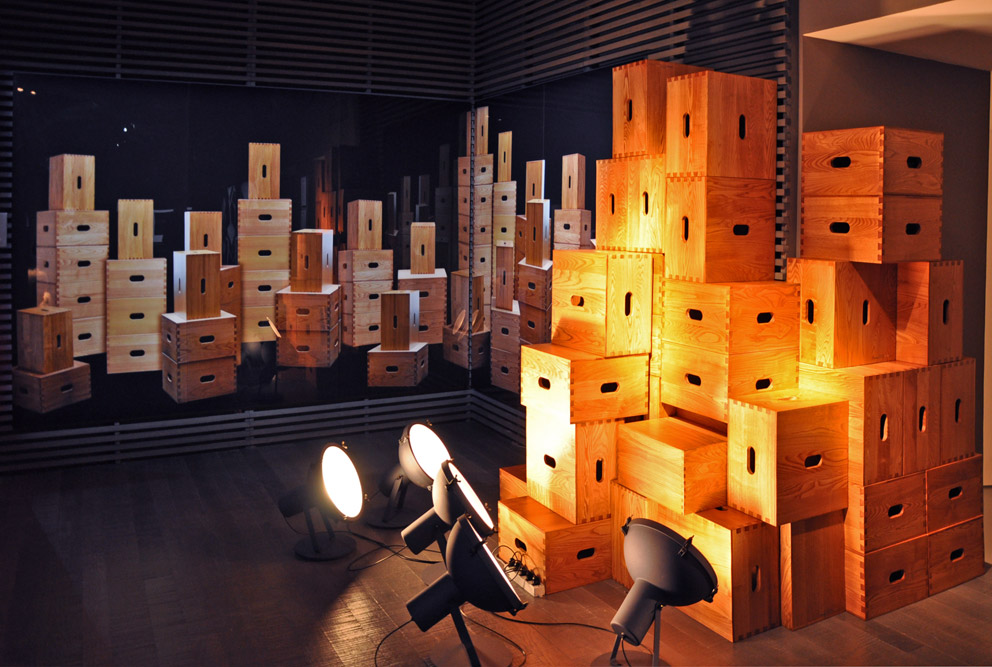 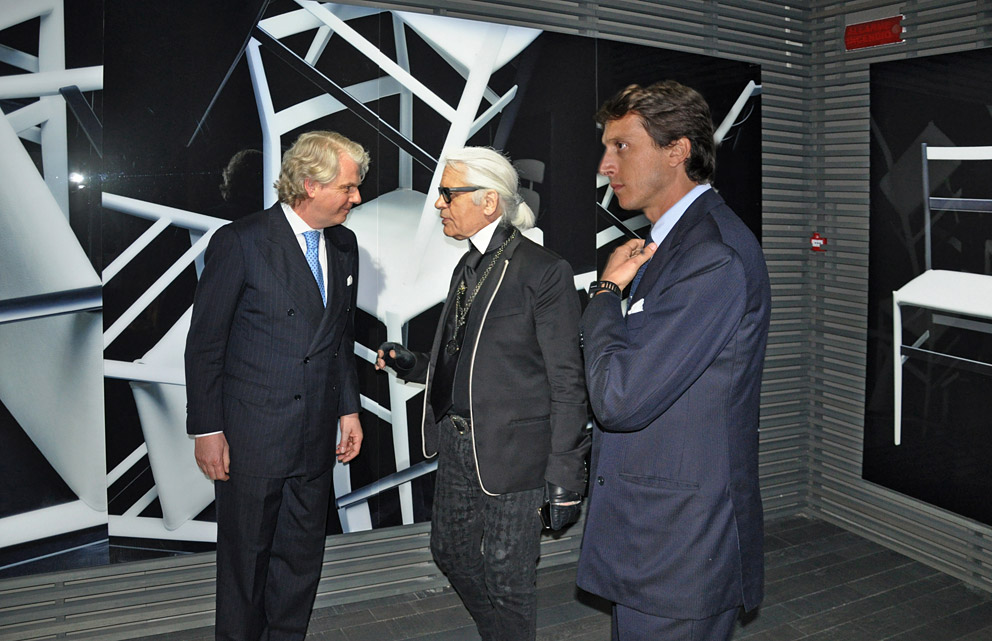 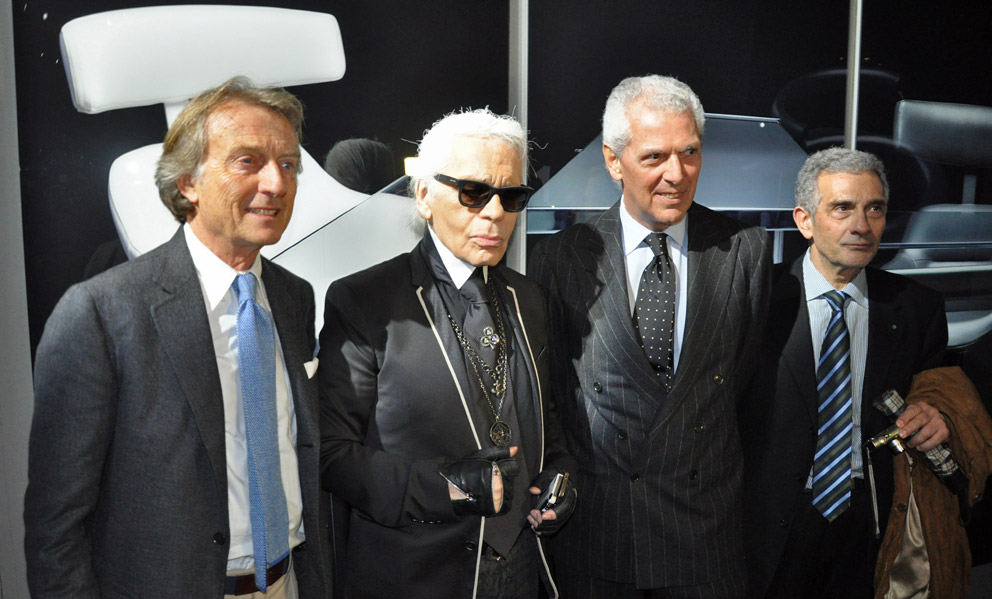 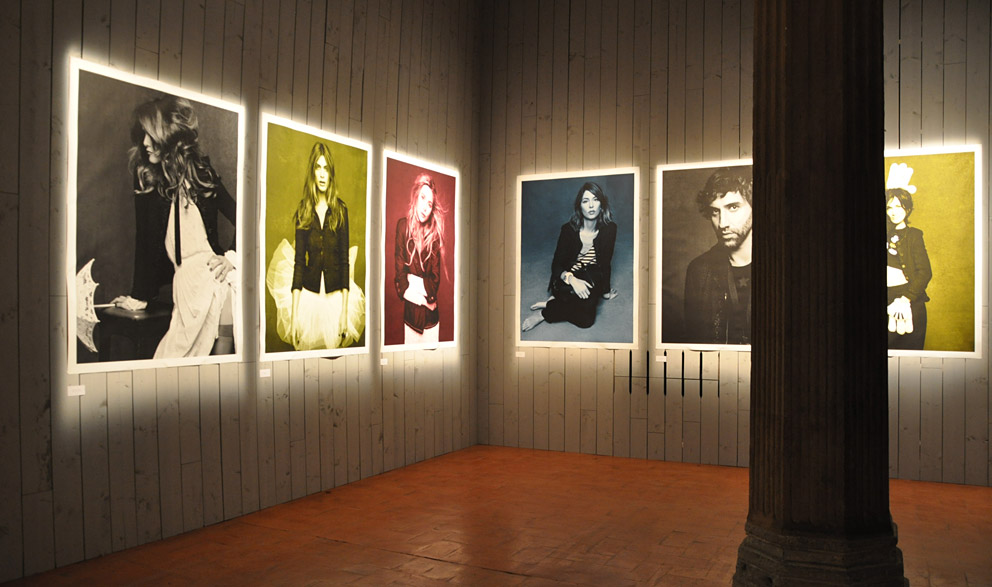 Caution! Karl has to get used to this kind of a model. „Nuage” bookcase by Cassina. Photo © Karl Lagerfeld for Cassina4
Advertisement