In 1967 the Alfa Romeo “Stradale 33“ was on the road, with butterfly doors and a V8 motors with a maximal drive of 10000/minute. Photo © Centro Documentazione Alfa Romeo

Be it in the guise of the racing prototype, the “T 33/2” or the “Stradale”, of which in fact less than 20 were built, many believe the “Tipo 33” dating from 1967 to 1977 was the most beautiful Alfa Romeo of them all. The basic idea and the one or other bodywork curve of the mid-engine “Stradale”, drawn by Franco Scaglione with its gullwing doors can today still be discerned in models such as the (current) “4 C” and the “8 C” (no longer on offer), sports cars with which Alfa seeks to relive those glorious days of yore. Or take the 1952 “C52 Disco Volante-Spider”, of which only two were built, which not only must have really gob-smacked Jaguar, but 60 years later celebrated an exclusive rebirth in a small series designed by the Carrozzeria Touring Superleggera on the basis of the “8 C”.

The “C 52” was Alfa’s “flying saucer” and provided the key: First because its very name alludes to the automobile “space” design that at the time was spreading above all in the States. Second, because the “Disco Volante” with its extraordinary drag coefficient (Cw value) of 0.30 locked into the aerodynamic insights of streamlining. And third because the three “B.A.T.” studies were supposed to spawn a successor to the flying saucer, and yet remained singular phenomena.

The result was three automobile studies known under the heading of “Alfa Romeo Berlinetta Aerodinamica Tecnica” or “Alfa Romeo B.A.T.” for short – today we’d talk of showcars, with designs by Italian airplane engineer and vehicle designer Franco Scaglione (who later masterminded the “33 Stradale”) in cooperation with car body designer Guiseppe (“Nuccio”) Bertone, son of the founder of bodywork makers Bertone. They were on display and eagerly ogled at the motor shows from 1953 to 1955. Based on an Alfa Romeo “1900 Super Sprint” chassis they were thoroughbred design studies.

To this day, the bodies of the cars in the series “B.A.T. 5” (1953), “B.A.T. 7” (1954) and “B.A.T. 9” (1955) – the numerals 5, 7 and 9 refer to the works study numbers assigned by Alfa Romeo – are real eye-catchers thanks to their streamlined shapes and exalted fins. Everything about them seems to be a premonition of a new, technological future. Yet here the purely technical is not construed as an end in itself but designed in line with aesthetic criteria.

The “B.A.T. 5” already posted a Cw figure between 0.19 and 0.21 and a top speed of almost 200 kph. The Cw figures for the “B.A.T. 7” were even lower. Visually typifying the “7”: the outsized rounded tail fins. The “B.A.T. 11” introduced in 2008 is edgier overall, the shape flows less and following New Edge design nowhere near as elegant – and less innovative. Not only owing to their type numbers, but also their extravagantly shaped fins led to the “B.A.T.” series vehicles often being termed “Batmobiles”.

The Italian Futurists had pushed the door open to usher in an aesthetics of the machine and paid homage to the dynamism and speed of driving and flying. As early as the 1920s and 1930s, streamlined vehicles had been developed for which aerodynamic insights gained from airplane engineering came to bear. There were streamlined autos, buses, motorbikes, locomotives and trains. Most of the shapes developed at the time did not gain sway, however, as they tended to be impractical.

After World War II, many engineers and designers who had been active in the airplane industry were looking for new work. On the other side of the Atlantic, in the 1950s the zest for new inventions continued unabated. The wish to conquer the skies returned, albeit in a more democratic and less martial form, as impetuous as it was playful. Besotted with jet engines and rockets as the engineers were, in the US auto industry’s design studios and showrooms the Space Age had started, long before the Sputnik Shock of October 1957. The race into space that unfolded between the two political systems was soon to assume epidemic proportions.

Seen thus, the three “B.A.T.” studies are essentially Alfa Romeo’s response to the gas-turbine-driven General Motors “Firebird” studies I-III, which combined streamlining from the 1930s with early 1950s rocket design, as if vertical thrust could be diverted into the horizontal plane of roads. While the Americans’ ideas seem techy, the Italians insist on creating driven sculptures for a new age. 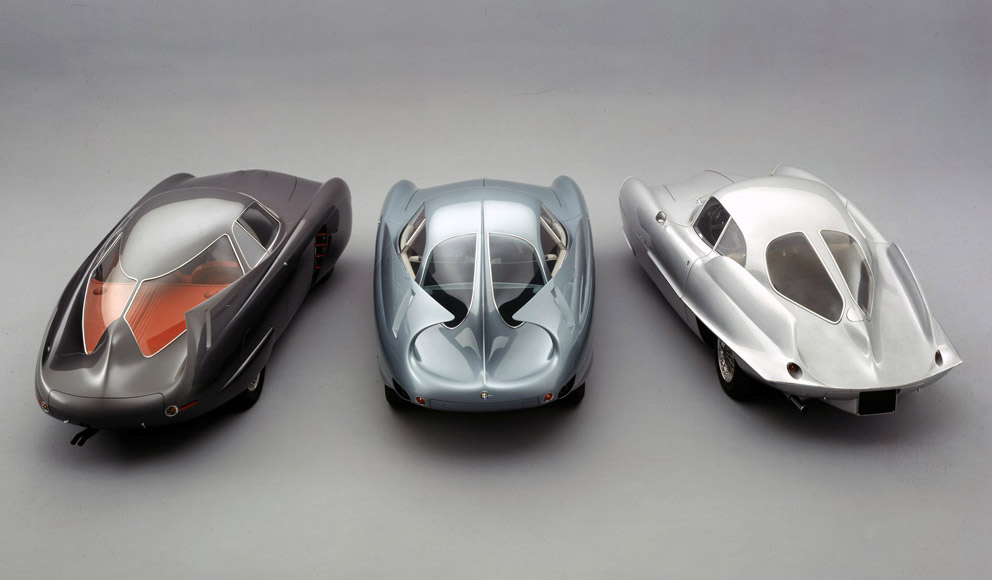 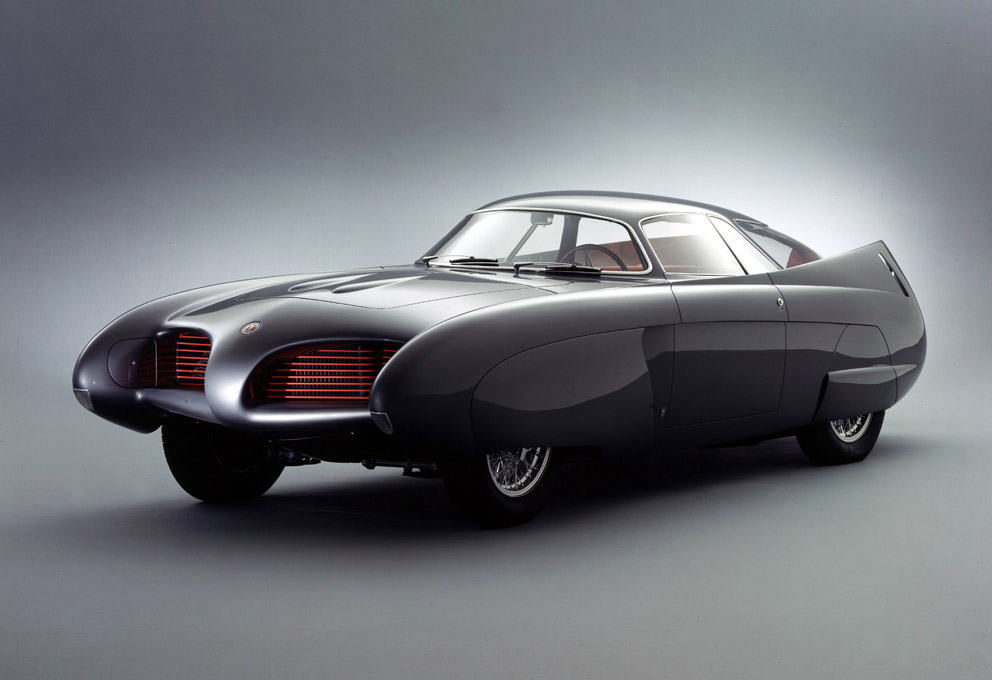 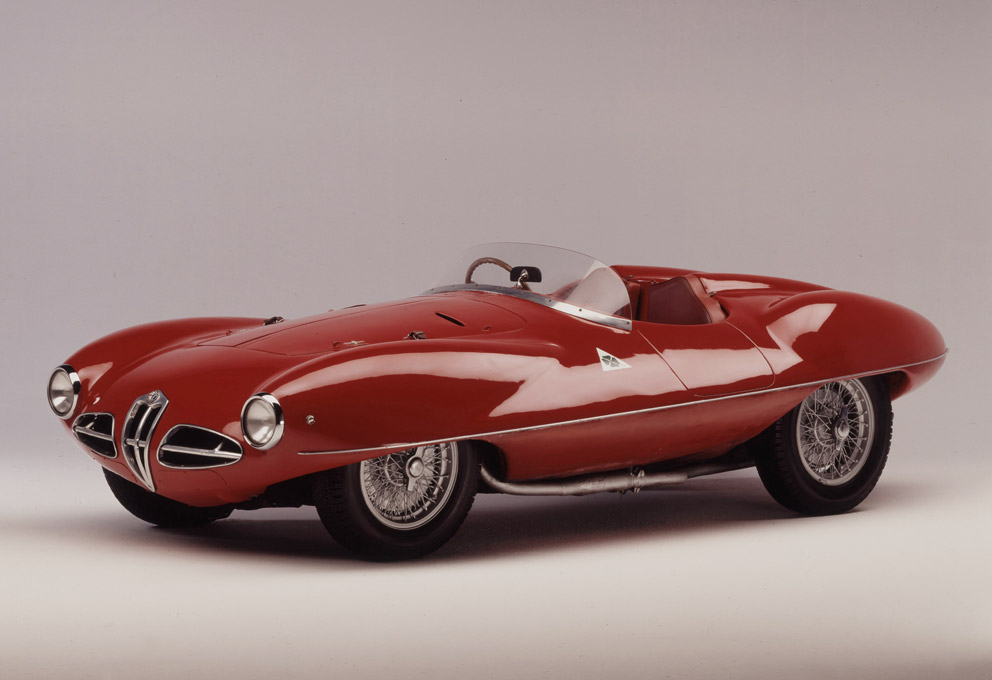 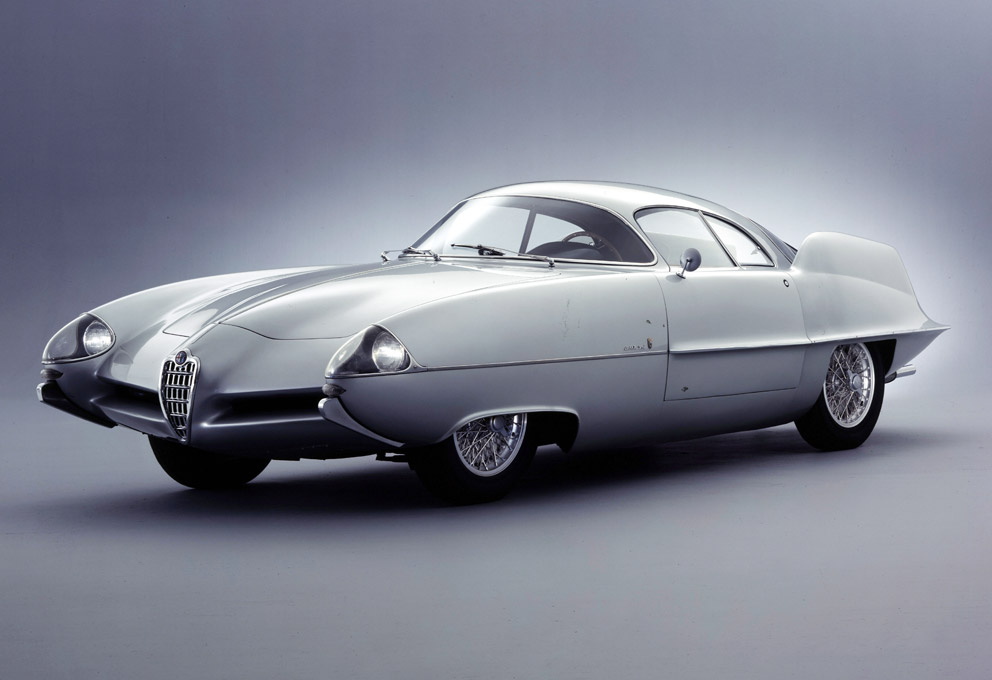 Everything seems to be a premonition of a new, technological future: the „B.A.T 9“. Photo © Centro Documentazione Alfa Romeo