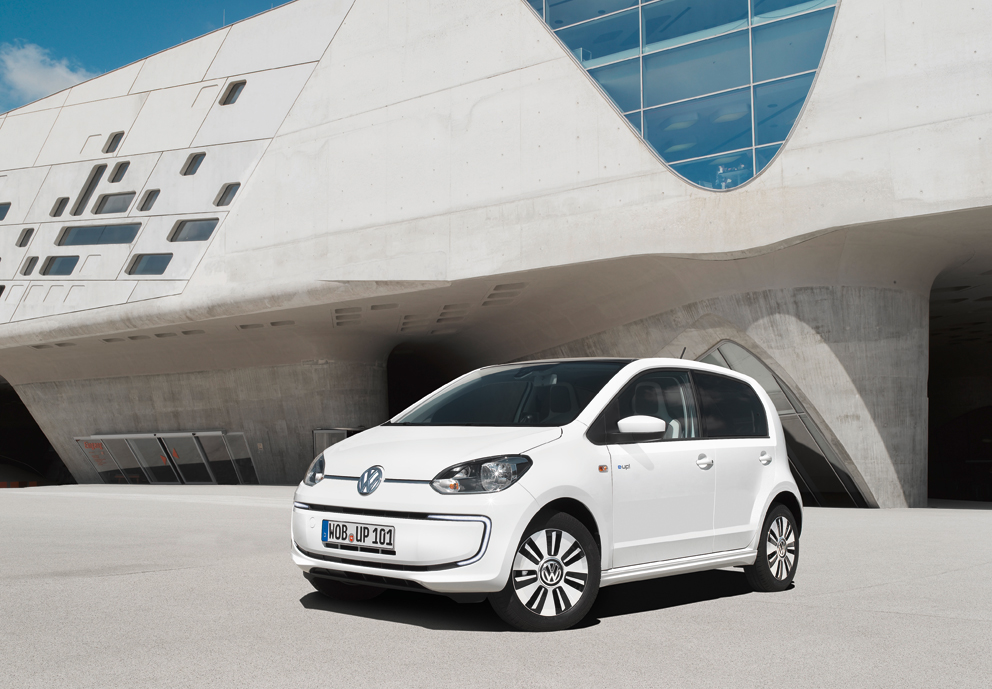 Are the e-cars on the way to overtake the autos with combustion engines? „e-up“! by VW. Photo © VW

Will it hold out? Will I arrive at my destination? And get back? Does the battery have enough power? Where can I get a new one? Will I find a charging station in time? – Alongside the exorbitant prices for electric cars it’s above all amorphous fears among prospective buyers and users that have hitherto stood in the path of electromobility becoming a success. The latest statistics on car registrations indicate that in August 2013 growth here was a huge 76.1 percent for new electric car registrations, but in absolute figures that’s only 435 vehicles.

Massive growth from a low level

The number of newly new e-car registrations grew from January thru August 2013 by a mere 3,339 – as against 2,311,808 new car registrations in total a pitiful figure. After a first wave of mainly small cars, ranging from the Mitsubishi “i-MiEV” (2009) through the Opel “Ampera” (2011) and Renault “Fluence Z.E.” (2011) to the Smart “Electric Drive” (2012), additional models have come to market, such as the Nissan “Leaf” (2012) and the Renault “Fluence Zoe” (2013). More luxurious e-mobiles have recently hit the streets in Germany – such as US manufacturer Tesla’s “Model S” and the compact premium auto, the BMW “i3”, which is scheduled to be rolled out in November. Volkswagen will be presenting its “e-up!” at the IAA and the “e-Golf”, whereby they’ll take a backseat to the new powerful autos with combustion engines.

Butterflies show you the way

Auto makers take very different approaches as regards the interplay of marketing, technology and design when it comes to proving their e-models are ready for everyday use. Ford’s “Focus Electric” is now being made in Germany after several delays and boasts countless switches, buttons and displays intended to help you run the car as efficiently as possible over as great a distance as possible. Three colored bar charts (acceleration, braking, gliding) indicate whether you are being thrifty or wasteful with your power. Turquoise stands for smart driving, orange for a problematic approach. And as if that were not enough, by braking (which inputs energy into the battery) and far-sighted driving you can collect animated butterflies that are displayed to the right of the speedo. All in all the “Focus Electric” cockpit seems pretty cluttered, though, with all the different displays, switches and controls.

Well-known simplicity – with a strong tradition

Simple to drive, which is what Volkswagen promises – and therefore eschews such little display rewards. The electric version of the successful compact, the “up!” has the usual easy-to-.grasp instruments in its cockpit. A navigation system on the dashboard shows battery charge status. Blue markings on the speedo indicate the ideal speed at which to drive: between 30 and 80 km/h. You can hit 130 for a short spell, and a single battery charge will take you 160 kilometers. A nightmare for your customary auto enthusiast, who certainly wants no limits on top speed or range. Yet today, 80 per cent of all drivers on average don’t drive more than 50 kilometers. And the “e-Golf”, which can hit 140 kmh with a range of 190 kilometers, is destined for everyday use on short hauls. As soon as you take your foot off the accelerator, “recuperation” starts, meaning braking power is fed back into the battery. You can select various drive and energy-saving modes. Only 20 years ago VW blazed the e-trail with its Golf City Stromer, albeit only with 100 test vehicles. The “e-Golf” is not expected out until 2014. With its tried shape and optimized technology Volkwagen is responding to the new rival on the block in the compact segment.

The compact premium BMW “i3” is designed to be the car for lived deceleration. A highly innovative carbon structure enhances passenger safety and saves weight. Which is crucial, as an e-car’s heavy battery packs spell a lot of weight. As a newly constructed auto, the BMW “i3” avoids bulky interior fittings such as a central console and the interior is far more spacious than is usual today. Moreover, the choice and finishing of the materials and surfaces (partly from regenerative sources) creates an unusually modern appearance inside the car.

The BMW “i3” relies on tested networking technologies already used in the other series. BMW “Connected Drive” is a pay-for program that combines online services, driver assistance systems, call-center services and smartphone integration. BMW also provides a special teleservice for the innovative e-auto – a cordless connection to repair shops in the event of problems. Greets from Big Data.

A navigation system with a landscape format screen displays the “i3” data on range, route chosen and charging stations along the way. And offers information on public transport if they would be a faster way of getting to your destination. You can use your smartphone even outside your BMW “i3” to prepare your trip. An App documents the vehicle and charge status. Charging can be controlled remotely. Meaning the auto can be preheated or precooled as long as it is still attached to the charging cable, which again boosts the range it can cover.

Built around a display

Tesla’s “Model S” takes an approach completely unlike all other e-autos currently on the market. In test drives it performs pretty well compared to the latest traditional luxury limos. In terms of finishing, fuel consumption, handling, sense of space and acceleration it gets top marks – and can hit 210 km/h. Since the charging infrastructure for e-cars is still underdeveloped, even its immense range of up to 480 kilometer is not that compelling for those who are on the road a lot for business, and at a high speed at that. Yet the “Model S” sets new standards. Not least with a 17” touchscreen integrated into the central console. The “Model S” certainly has none of the complicated, tiered structures of most in-car entertainment systems with displays fit for mice. The screen is larger than a tablet computer and displays all processes in the car – and can be used to control them. You can use it to input the default settings for the chassis for example. The interior temperature and the (optional) glass roof are likewise controlled via the Touchscreen. Charge status, battery regeneration, sound-system settings, the media player and the radio, the outside camera and hands-free phone system are all integrated into the central display thanks to marvelously programmed software. And the system also delivers a permanent Internet connection.

E-mobility as a field for experimentation

E-mobility networking shows, for example, just how much the method, business models and visions differ: On the one side the established auto corporations with structures typified by an extreme division of labor, on the other the company of visionary entrepreneur Elon Musk, who even if the initial losses are immense develops an item that is as coherent as possible and is thus upsetting the applecart in the market at least in terms of design and quality standards.

As a rule of thumb, what hitherto entered cars (be it sensible or playful) in the guise of car entertainment is part of information offerings in e-cars destined to make relaxed driving possible even over short distances. Even if the electric car is anything but a mature matter, it seems to be highly welcome as a field for experimentation in integration and networking communications technology. It remains to be seen whether there’s a market for it. 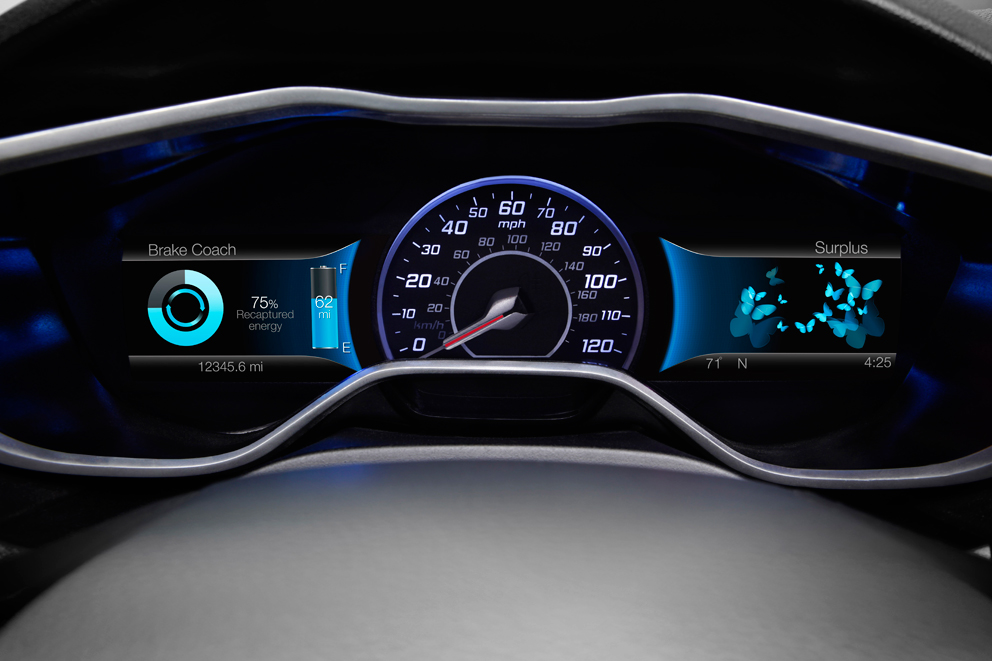 Through far-sighted driving you can collect animated butterflies that are displayed to the right of the speedo: „Ford Focus Electric“. Photo © Ford 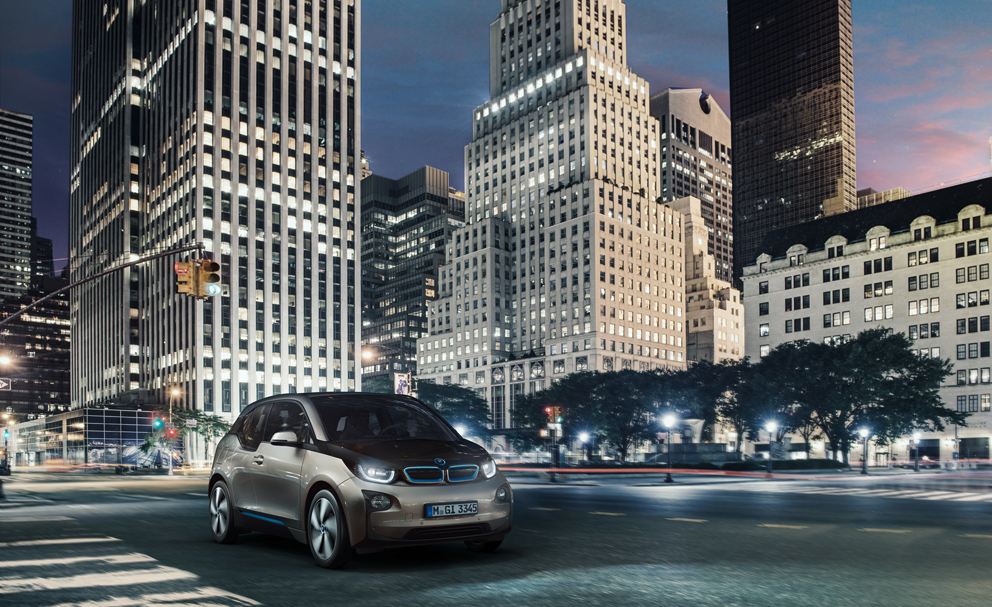 The car for lived deceleration: “BMW i3”. Photo © BMW Group 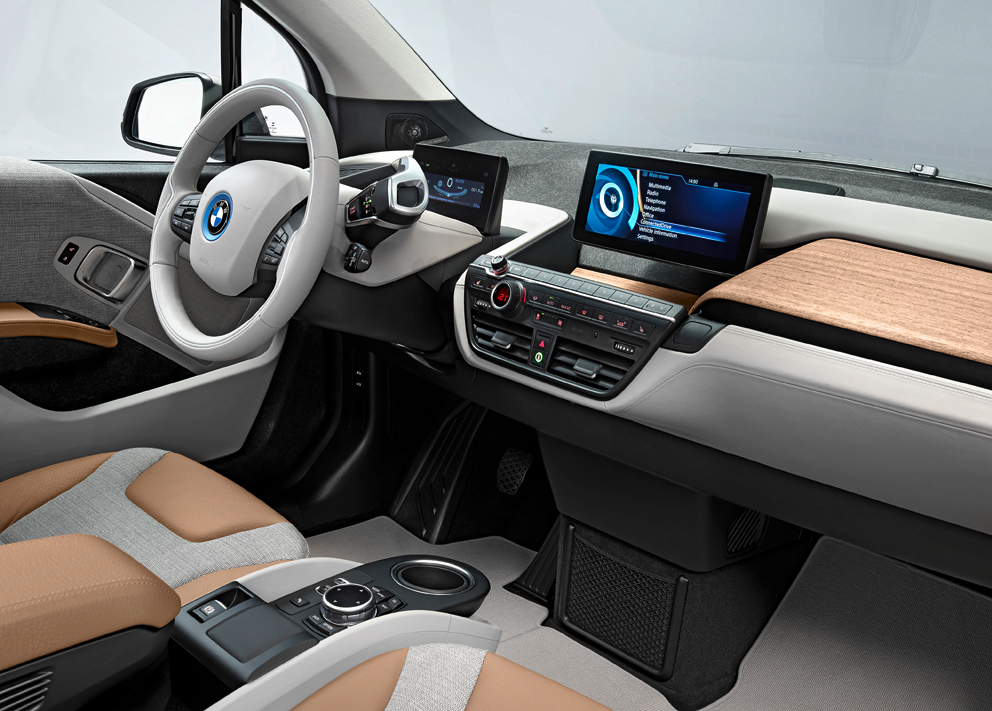 The BMW “i3” avoids bulky interior fittings such as a central console and the interior is far more spacious than is usual today. Photo © BMW Group 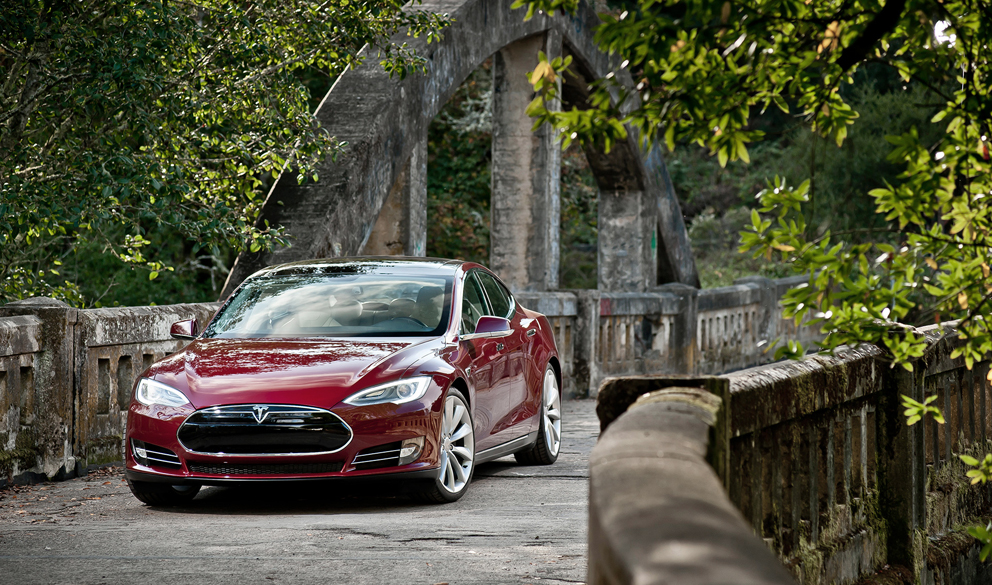 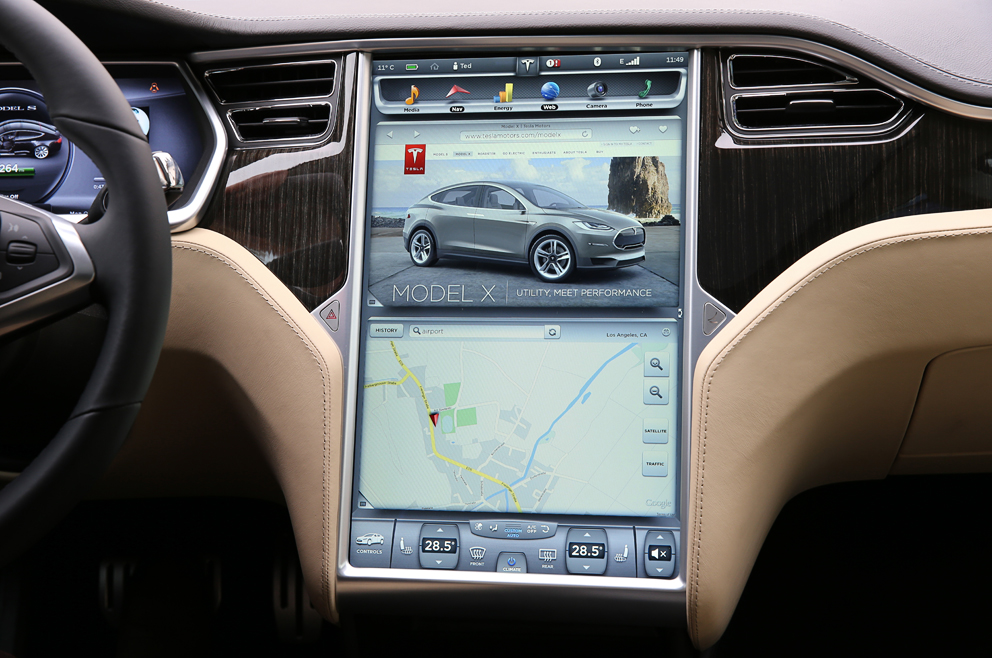 The screen of the “Tesla S” is larger than a tablet computer and displays all processes in the car – and can be used to control them. Photo © Tesla
Advertisement