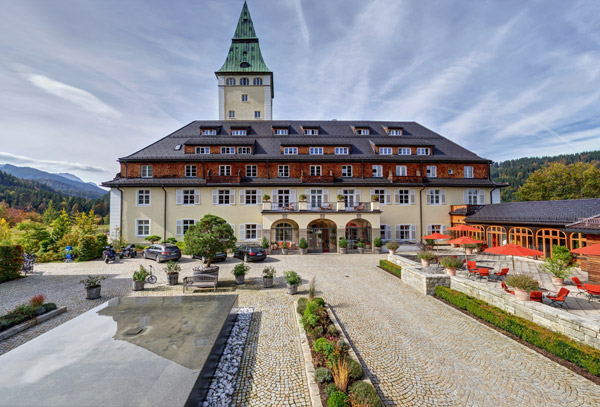 When, back in 1916, philosopher and theologian Johannes Müller commissioned Munich-based architect Carlo Sattler to build the manor house at the foot of the Wetterstein mountains what he had in mind was a haven of rest and tranquility for himself and his guests. Disappointed by the Church as a doctrinal institution, in Elmau he wished to devote himself in peace and quiet to penning his hypotheses on a “new free Christianity”. A little less than a century later, Schloss Elmau in South Bavaria still serves as a haven for travelers and nature enthusiasts. On top of which, guests can today, flanked by the impressive mountains, really enjoy being pampered. In March of this year, the grounds, hitherto consisting of the main building and the Badehaus, were expanded to feature a new build. Munich architects Hilmer & Sattler und Albrecht have designed a five-star resort that goes by the name of “Schloss Elmau Retreat”, features 47 suites, two restaurants, a library and terraces offering a fantastic view of the flanks of the Wetterstein ridge. The bathrooms are especially spacious and luxurious, boasting high-grade Axor mixers.

For the sophisticated hungry for luxury

Alongside countless spa offerings, Schloss Elmau also offers a veritable potpourri of cultural events – from concerts in the music pavilion through films to readings and symposia. To this day, the high-brow entertainment attracts an illustrious group of sophisticated minds, intellectuals and Bohemians. Loriot was one of the regular guests and wrote many a book here. Philosopher Peter Sloterdijk also seized the opportunity in July 1999 to hold his “Elmauer Speech” here, in which he introduced the “Rules for the Human Zoo”, sparking a public debate on bionics and its implications for humanity.
In June, Schloss Elmau will be the venue of the G7 Summit and provide the politicians with a perfect setting for negotiating – and marvelous overnights. Fittingly, then, that hotel owner Dietmar Müller-Elmau has expanded the exquisite haven of tranquility to include the “Schloss Elmau Retreat”.

The hotel owner insisted on the absolutely timeless and elegant design of the new rooms, which will remain appealing even in many years’ time. Muted colors such as warm red and gold as well as dark herringbone parquet in the suites set a tone of tasteful luxury. The bedrooms and living rooms are very spacious, and the large beds and comfortable settees ensure the occupants will relax. The bathrooms are likewise roomy. Back in 1916, guests had to be content with one bathroom a floor for 20 rooms. Today, the new bathrooms are on average 20 square meters large and constitute little spas in their own right. Thanks to their no-frills and forever sleek design the high-end Axor mixers from the “Axor Citterio” blend perfectly with the tops made of Jura marble. The striking design element of the single-lever basin mixers is the handle, which is used throughout the collection: It’s an upright joystick in the single-lever mixers and a perfectly symmetrical cross head for the three-hole basin mixer or a right-angled lower handle. The “Axor Citterio Showerpipe” is equally timeless and graceful: It consists of a thermostatic mixer, a hand shower and an overhead shower. Citterio ingeniously plays with the exciting juxtaposition of sharp and rounded edges. “The products not only stand out for their versatility in use, but also for being very easy to operate and very pleasant to touch,” says the Italian designer proudly when describing the line. 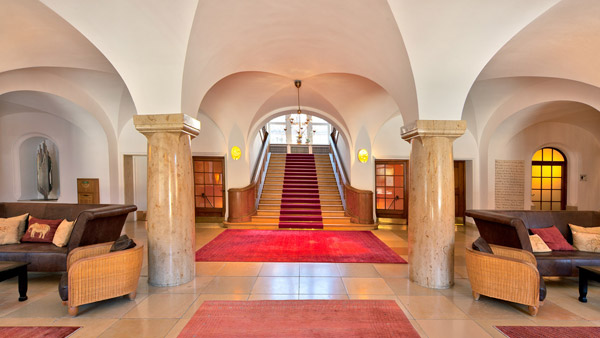 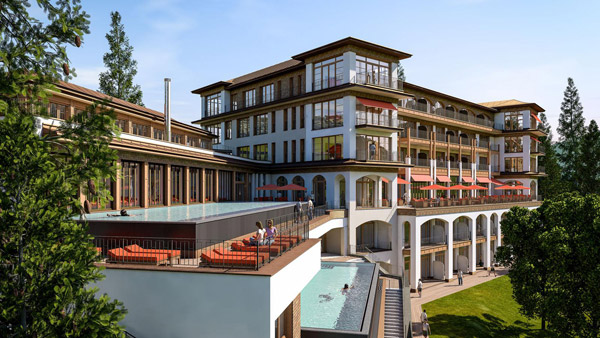 Manorial temple to luxury: This is what the “Schloss Elmau Retreat” looks like, which opened on March 21, 2015.
Rendering © Schloss Elmau 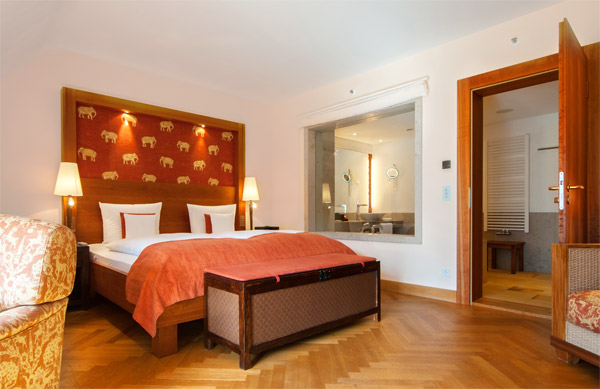 The bedrooms in the suites are spacious and offer plenty of scope for relaxation – as do the adjacent bathrooms.
Photo © Markus Eistert 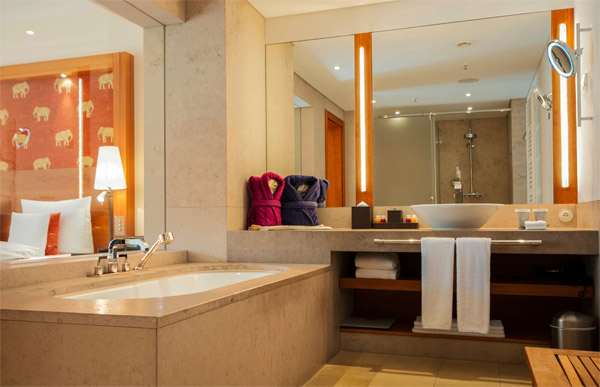 Surfaces made of Jura marble and the timeless mixers from the “Axor Citterio” collection breathe a touch of luxury in the bathrooms. Photo © Markus Eistert 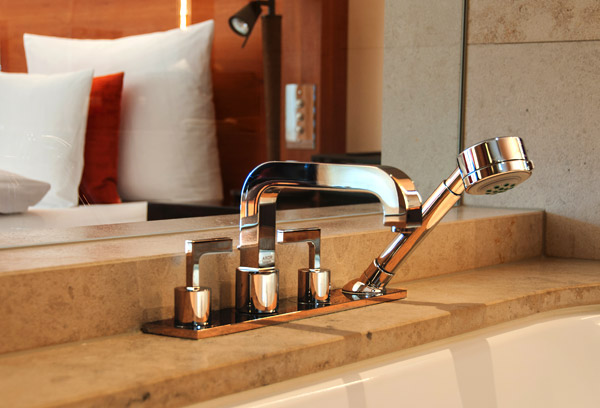 There’s a simple pulling knob which enables you to switch from filling the tub to using the hand shower. The surfaces of the mixers have been hardened to ensure they are especially scratchproof and robust, meaning they are impervious even to aggressive detergents. Photo © Markus Eistert 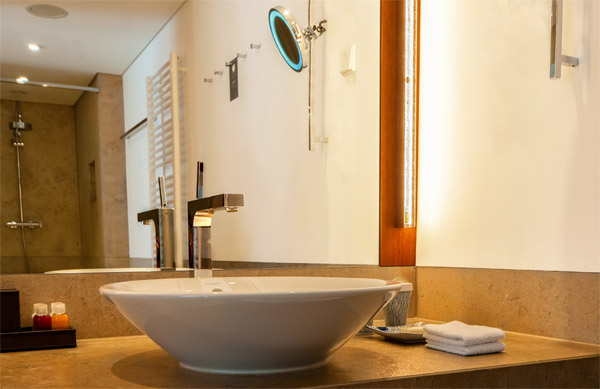 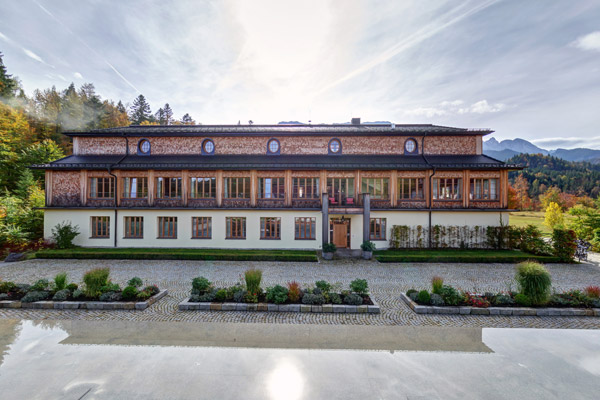 Relaxation, fitness, fun bathing: The Schloss Elmau Badehaus Spa opened in 2006 and includes a Finnish sauna and a pool on the rooftop terrace. Photo © Schloss Elmau 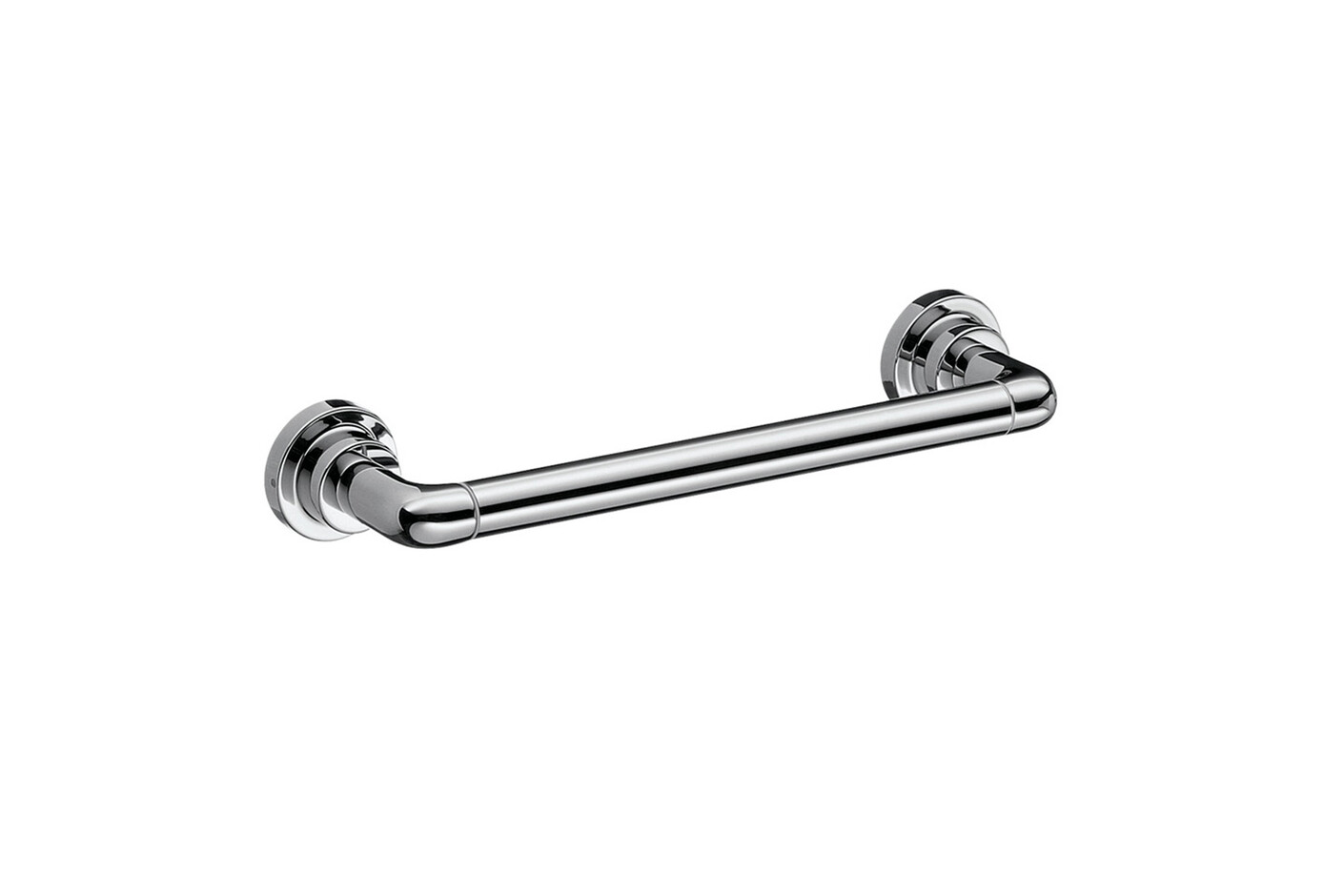 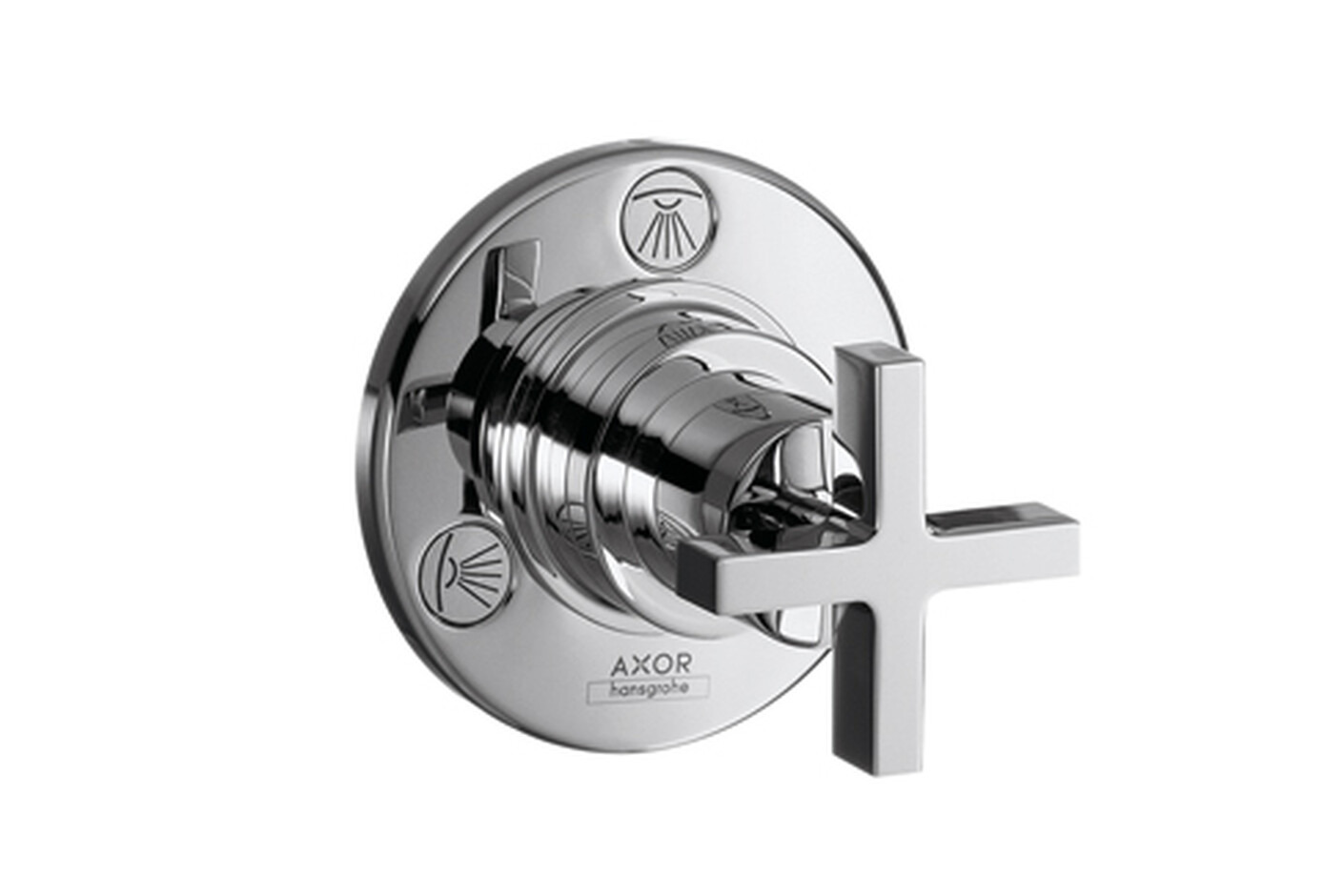 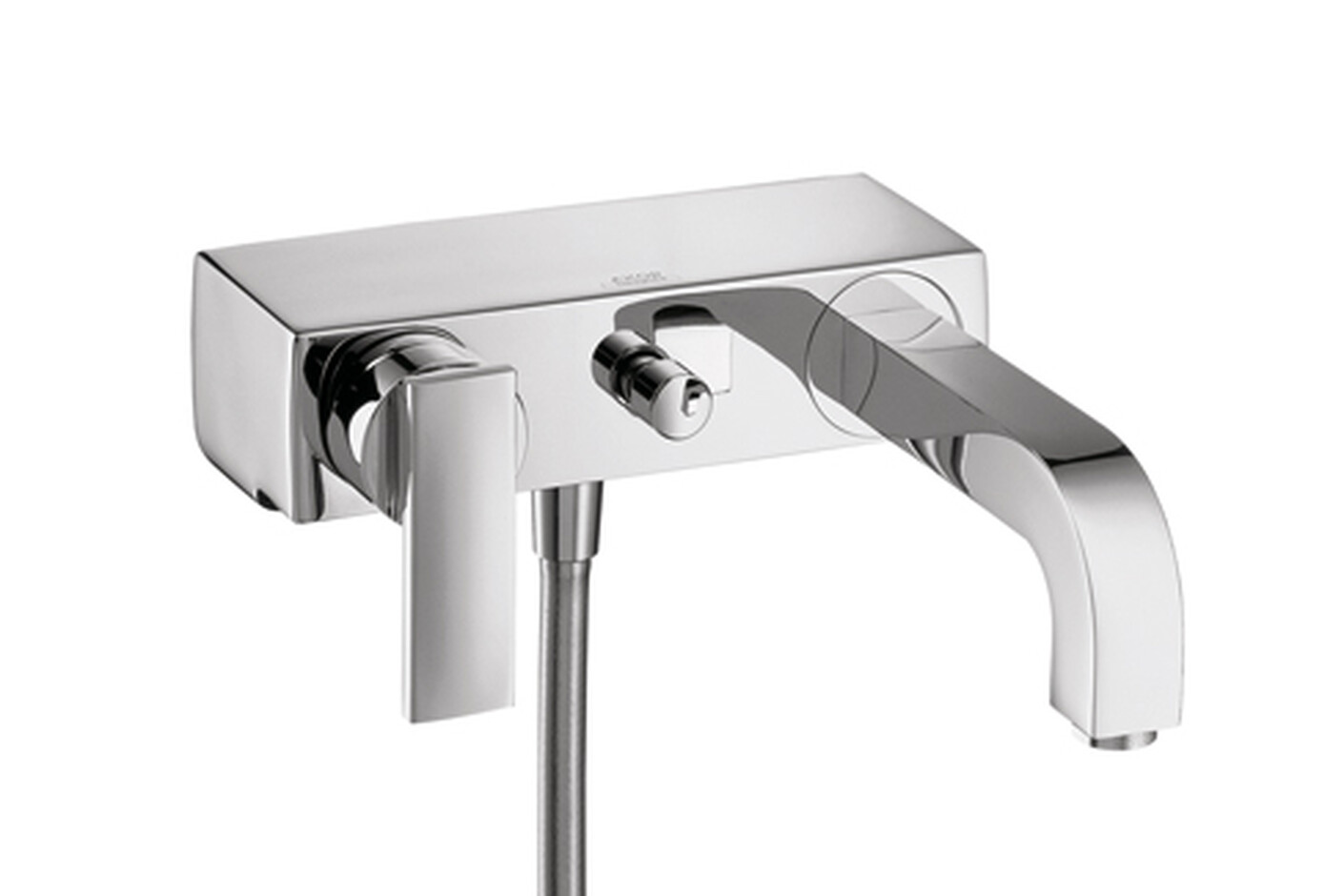