e15 has almost a year of hard work behind it. Nearly 12 months of tough grind were required to breathe new life into Ferdinand Kramer's furniture designs. The outcome is a fine collection of eight pieces that "illustrate a cross-section of his work", reports Philipp Mainzer. These re-editions were produced in close collaboration with Lore Kramer, the architect's second wife, and the plan is to use this as a starting point for further developments, because to say that Ferdinand Kramer's work is multifarious would be an understatement.

Born in Frankfurt, Kramer is no stranger in his hometown – after all, subsequent to the War his architectural work and urban planning as construction manager for the Goethe University certainly left its mark on the city. Until his appointment in 1952, Frankfurt had only had a university foundation for which the city held sole responsibility. Working on a tight budget, all building activities needed to be conducted on a frugal basis. With this in mind, Kramer often adopted his own idiosyncratic, unconventional approaches which sometimes elicited incomprehension and protests from the Frankfurt citizens.

One example: Kramer had the university's narrow main entrance, which was framed by pillars, replaced by a generous, open entranceway, fully glazed right up to the ceiling. Some people thought this as a crime against a venerated edifice but for Kramer it was a consistent adaptation to a change in requirements. This meant that even the life-sized figures above the portal were now superfluous. They were replaced by a giant nameplate with the name of the university in Sans Serif script, reminiscent of the world-famous "Futura" by Paul Renner. The latter had taught in Frankfurt in the 1920s and was inspired by Kramer's work and his use of scripts when creating what was later to become his Futura font, as is explained in a brochure on design guidelines issued by the city of Frankfurt in 1985.

In 1958, Alexander Kluge wrote in answer to a survey: "Kramer's style of building is functional, cheap and boasts lines which are almost delicate, the like of which is to be found almost nowhere in Germany." Too sparsely adorned and, at the same time, taking things too far for many citizens and for many of his architect colleagues who, even in the post-War era, still often longed for a kind of "cold grandeur", for pompous buildings with ornaments and opulent decoration adorning their façades. No wonder Kramer felt more at home with original thinkers and intellectuals. Max Horkheimer, Theodor W. Adorno, Theodor Fischer, Walter Benjamin and other important academics were among his circle of friends and acquaintances.

He also designed fittings for Frankfurt University and in 1959 he conceived a multipurpose table which, even today, accurately corresponds to his outlook on design. A simple formal idiom replete with clear lines, using everyday materials and the manufacturing methods of the day, leaves no doubt that this table of Kramer's should be seen as an everyday object. The table was used, among other things, in the university cafeteria and was manufactured by a factory that produced metal goods, Nienburger Metallwaren Fabrik. As photos from the 1950s and 1960s reveal, the table was manufactured in different sizes, in line with its functional purpose.

Today, the table, which in the e15 re-edition goes by the name of "FK07", can almost be considered an icon. The corner detail is the eye-catcher and also serves a functional purpose by stabilizing the unit. The "FK07" table is a faithful reconstruction of a piece of furniture developed for the university's philosophy department, and the welding seams are the only visual detail to differ from the original – owing to improvements in technology. "There's no documentation on many of the details of the design," recalls Philipp Mainzer, describing the difficulties innate in the re-edition. Yet another reason why intensive research into Ferdinand Kramer's thought processes was necessary.

On completing his studies at Munich Technical University in 1922 (disappointed, he had turned his back on the Bauhaus in Weimar after only a few months) Ferdinand Kramer started designing small items of furniture and appliances. It was during this time that he made the well-known "Kramer Stove" made of black enameled sheet steel. From 1925 onwards, Kramer then worked under Ernst May in Frankfurt's Municipal Civil Engineering Office. His work included designing a lot of the furniture and interior appliances for the "New Frankfurt" housing estates. He later handled the planning of the open-corridor access "Westhausen". The goal: to the find shapes for "low-income but human dwellings".

In 1930 Ferdinand Kramer went freelance, until, in 1937 his work was prohibited as "degenerate architecture" and Kramer was unable to continue his work in the profession. In 1938, he then followed his Jewish wife Beate Kramer and emigrated to the United States, where he mainly worked as a designer, although in 1940 he received a license to work as an architect.

As in architecture, in his furniture designs Kramer focused on utility and a high degree of flexibility. It is therefore hardly surprising that the principle of self-assembly is to be found in his furniture from an early date. Philipp Mainzer comments that "the flexibility of use, mass production, lesser volumes, and the related reduction in transport costs are many aspects that are key in furniture production today, and which Ferdinand Kramer was already busy thinking about 50 years ago."

"Knock-Down Furniture" was very pragmatically geared to the US way of life. The functional items of furniture consisting of only a few components were easy to assemble and take apart again, something that was especially practical if you changed apartments. His 1943 design for a "Put-away-wardrobe" provides a perfect example, made of wood, hardboard, and metal plugs and connectors, it can be taken apart and reassembled with ease. This was functional furniture in line with the zeitgeist, perhaps even a tick ahead of it. Ferdinand Kramer himself wrote in Frankfurter Zeitung in 1930: "The one or other bourgeois notion of a comfortable corner needs to be cleared away." In a review of books on interior design he continued: "Life calls for different appliances, different furniture items, and different rooms." He also criticized the fact that publishing companies "ignored these quite manifest issues."

As exciting and fascinating as Ferdinand Kramer's story is, today his influence is little known to the wider public. In accompaniment to an exhibition that was held in the Baushaus Archiv in 1982 a catalogue was published that not only opened up new perspectives on the content of Kramer's creative portfolio, but it also presented an extensive display of his work in architecture and design. In 1991, a detailed monograph entitled "Ferdinand Kramer – Der Charme des Systematischen" was released, while in 2000 Wuppertal University dedicated an entire exhibition to Kramer; "Wohnreform", presented a consideration of the changes in living conditions during the 1920s.

For Philipp Mainzer, extensive background reading was the first step toward gaining a true understanding of Kramer's work, his furniture design in particular. "Lore Kramer sent me an exhibition catalogue. Then we started the detailed research; at Wuppertal University for example whose design collection contains a number of Ferdinand Kramer's pieces." In addition to the few remaining items of furniture that were made available to Mainzer or that he could at least examine, when developing the re-edition, he often had little more than reproductions of the pieces found in old catalogues or old photographic material to work with. "We developed the manufacture plans from the photographs we had. The old prototypes and the furniture that was still in use often had different dimensions such that we had to derive the new dimensions based on visual criteria alone."

Despite these difficulties, e15 succeeded in producing an accomplished translation of Ferdinand Kramer's unique formal vocabulary and design technique into a new collection. In terms of construction, it was for the most part only small details that required adaptation to the requirements of contemporary mass production. "We only ever allowed ourselves to make the most minimal changes. We were in constant dialogue with the Kramer family and were able to fine-tune the details." This was indeed the case with the coat rack hooks, which were given rounded edges. Even with changes to the materials, the designs were modernized with caution and the range expanded.

The 1925 Daybed was originally made of oak, in the re-edition however the lounger now "FK01/THEBAN"is also available in walnut. As an alternative (in terms of price as well as appearance) to the leather cover, a linen version is also available. This can be combined with the "FK02/KARNAK" sold with covers in the same materials. Building upon the original design, the chair's frame has been enhanced with steel, providing greater stability. The "FK03/ASWAN" stool from the same product family was also subject to the same functional improvements.

Philipp Mainzer sees many parallels between e15's designs and Ferdinand Kramer's pieces. "We prefer to work with solid wood, which we then combine with other materials in an attempt to achieve a timeless shape. Yet despite our love for reduced styles, it is important that our product range is livened up by contrasting elements."

The contrast to the Kramer collection's line of recliner, chair and stool comes from coffee tables "FK04/CALVERT" and "FK05/CHARLOTTE". The combination of laminated wood and simple manufacturing gives the designs from the "Knock-Down" series their characteristic look. Made of plywood, the pre-molded parts, which seem to have been derived from a single pattern, are simply put together. It is the shape of the tabletop that makes all the difference: Charlotte comes with a round top, while Calvert prefers a square shape. Both tables have an identical base.

Also featuring in the "Knock-Down" series is the "FK06/ALDEN" table. Plans for the early 1940s design could no longer be obtained, which is why the proportions and dimensions had to be reconstructed. The tabletop is made of 30-mm solid wood, with the V-shaped base is set back from the edges. The table, which can be dismantled into four parts, changes its appearance depending on its length. In the longer versions, the base disappears further under the top, giving the table an overall lighter quality.

With her decision to have a re-edition of furniture by Ferdinand Kramer produced by e15, Lore Kramer, who herself taught at Offenbach's Academy of Art and Design, has embarked on a very promising path indeed. It is very conceivable that the coming years will see even more treasures from Kramer's estate resurface. 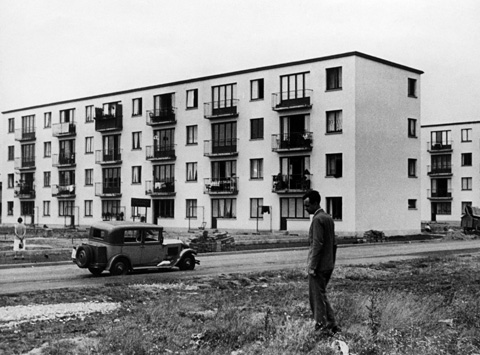 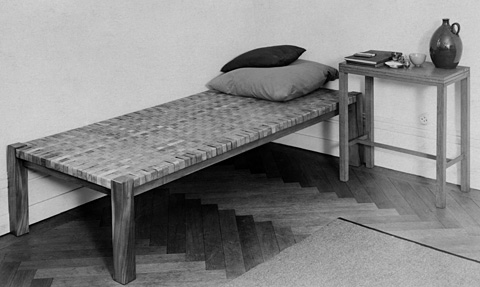 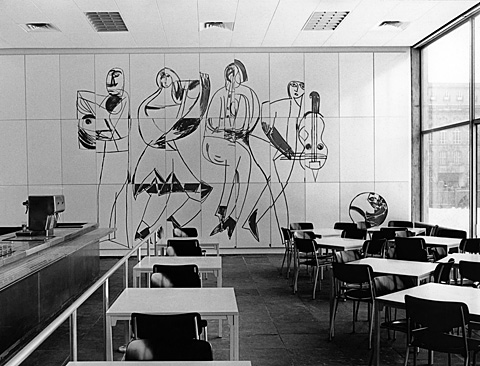 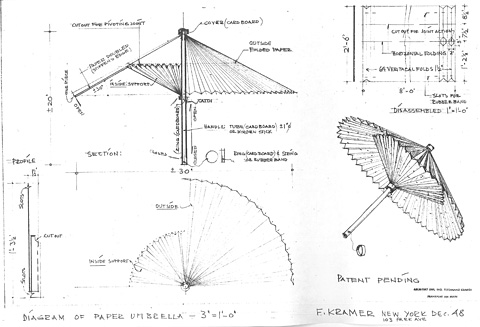 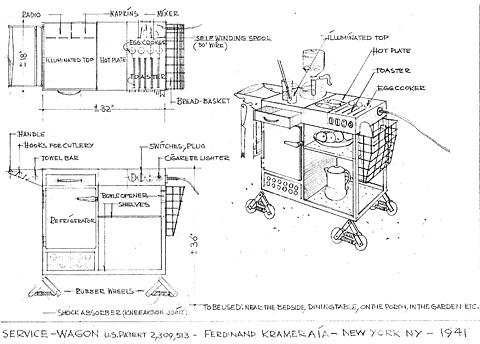 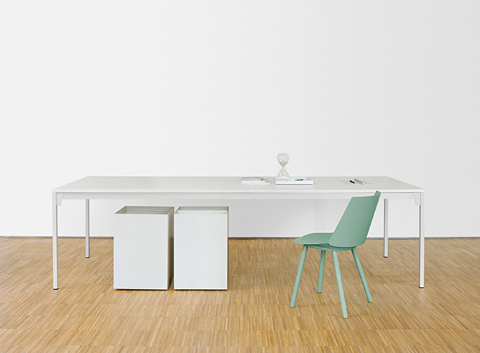 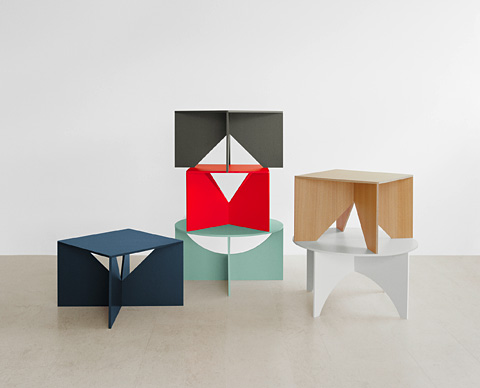 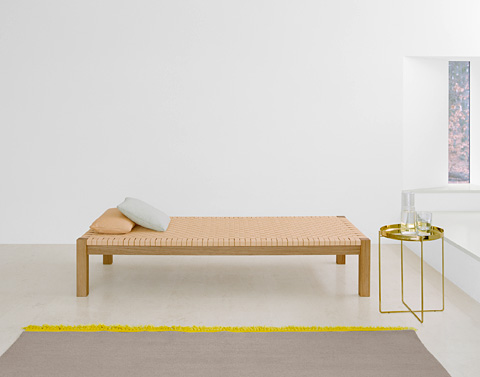 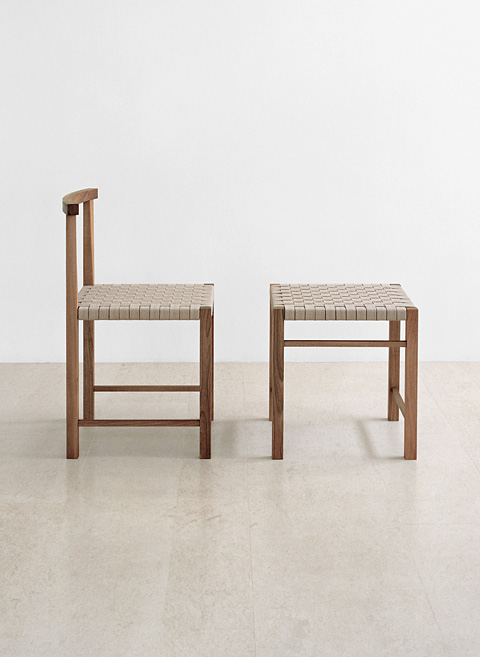 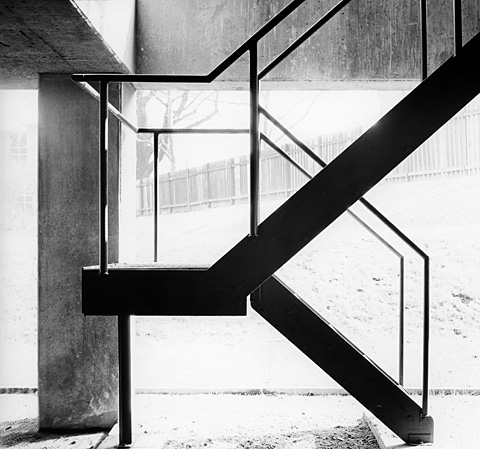 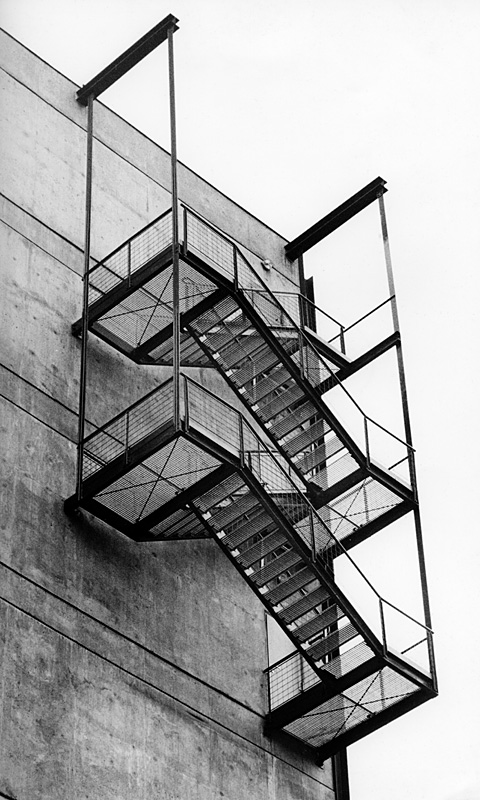 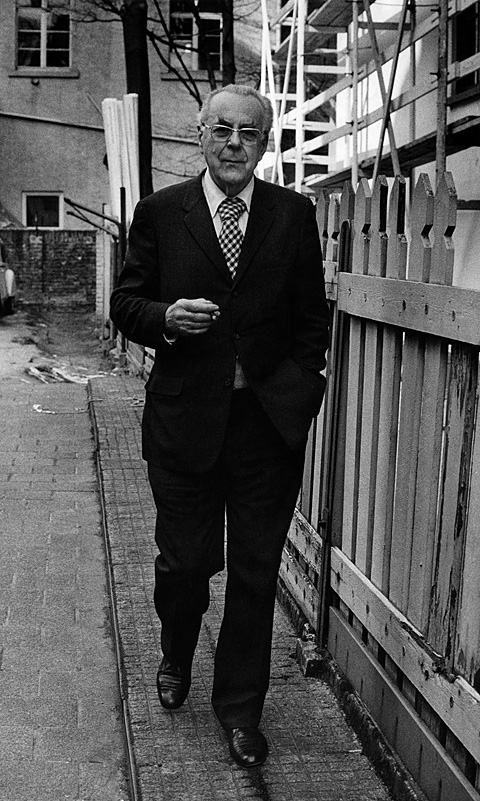 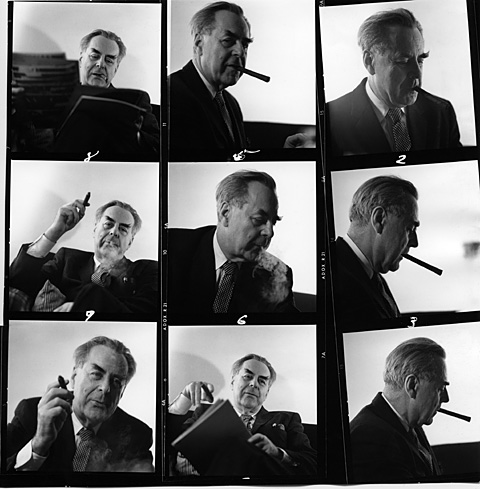 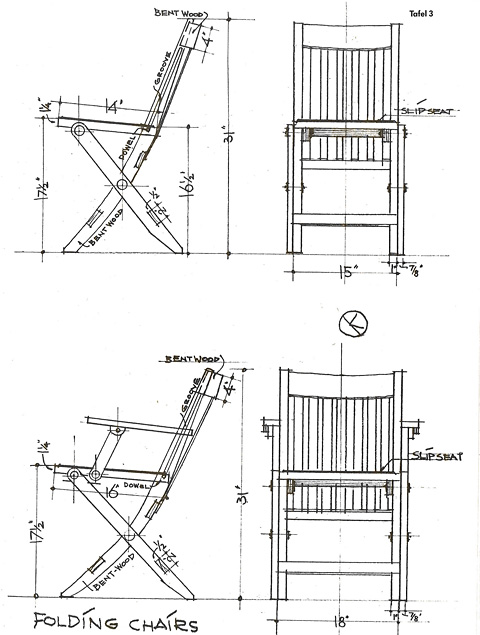 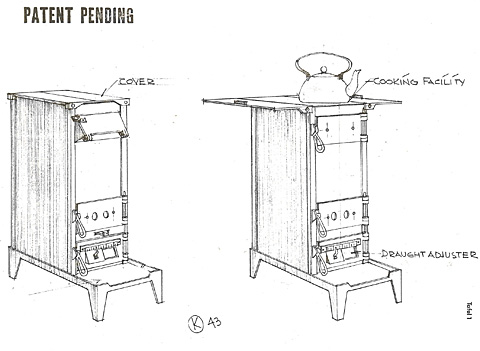 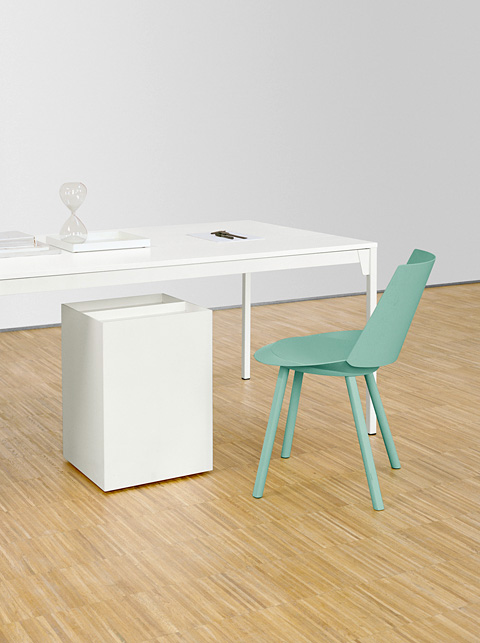 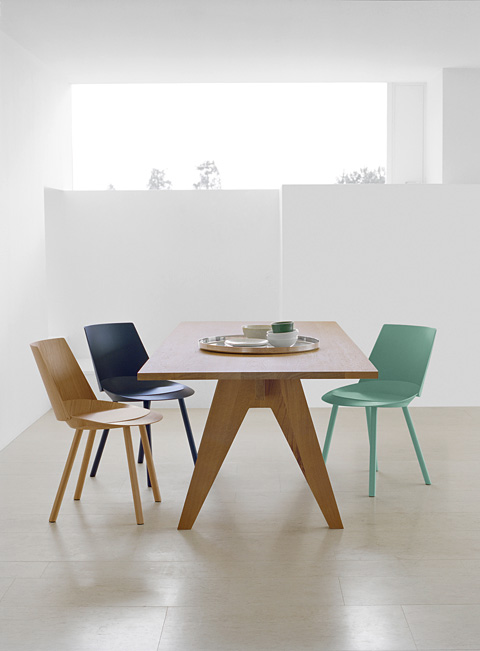 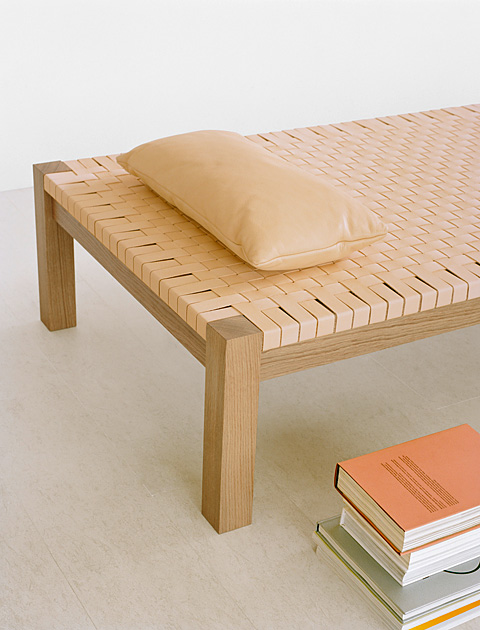 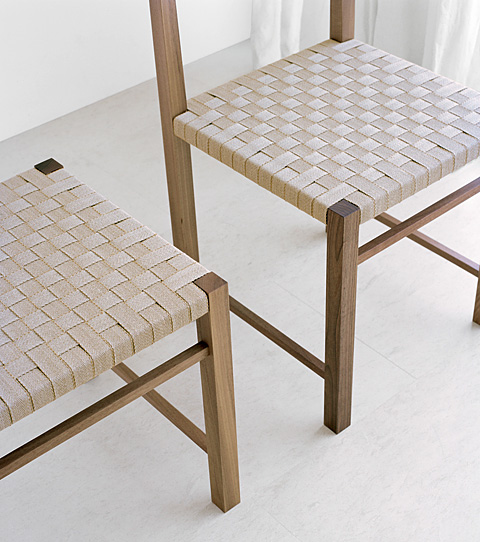 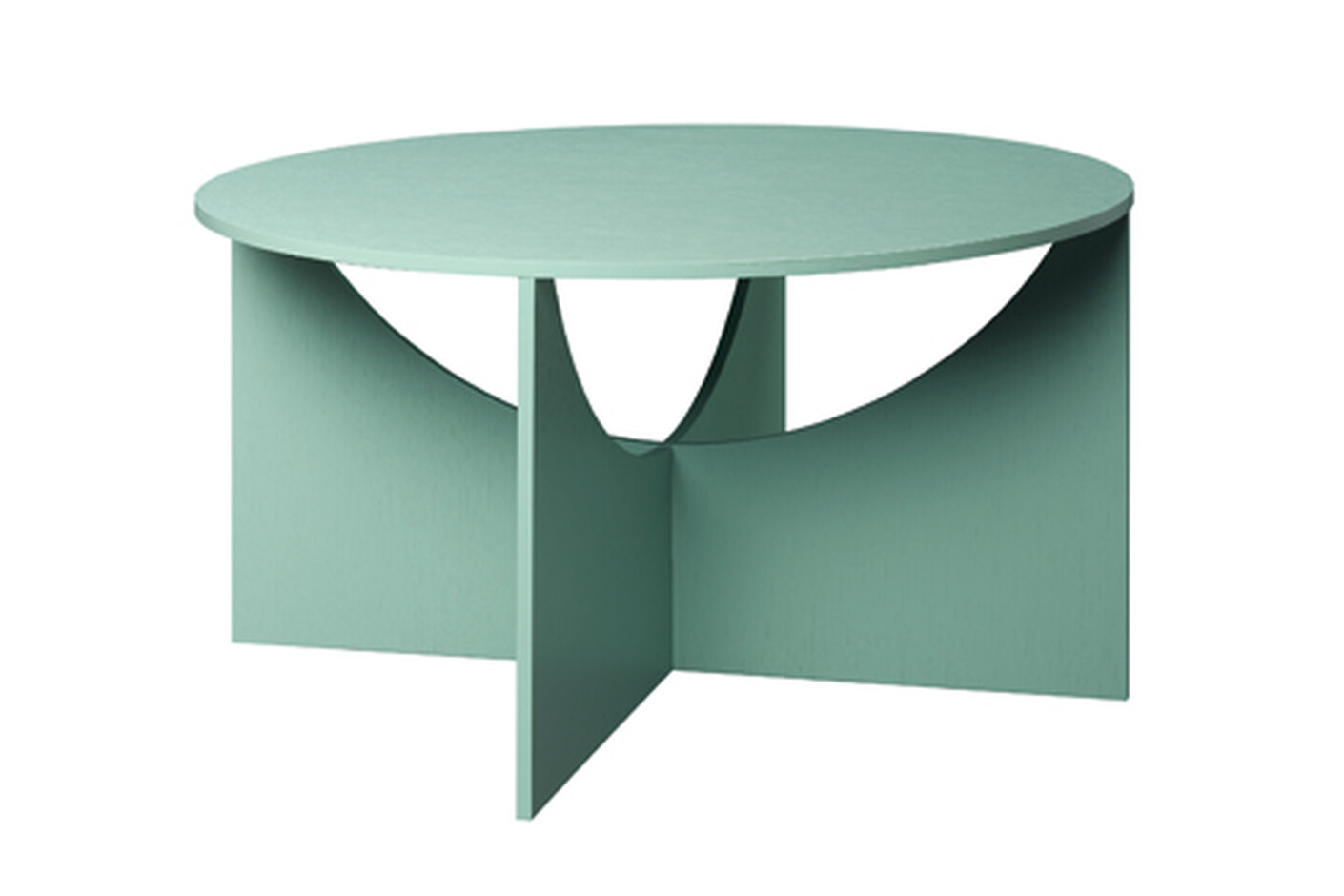 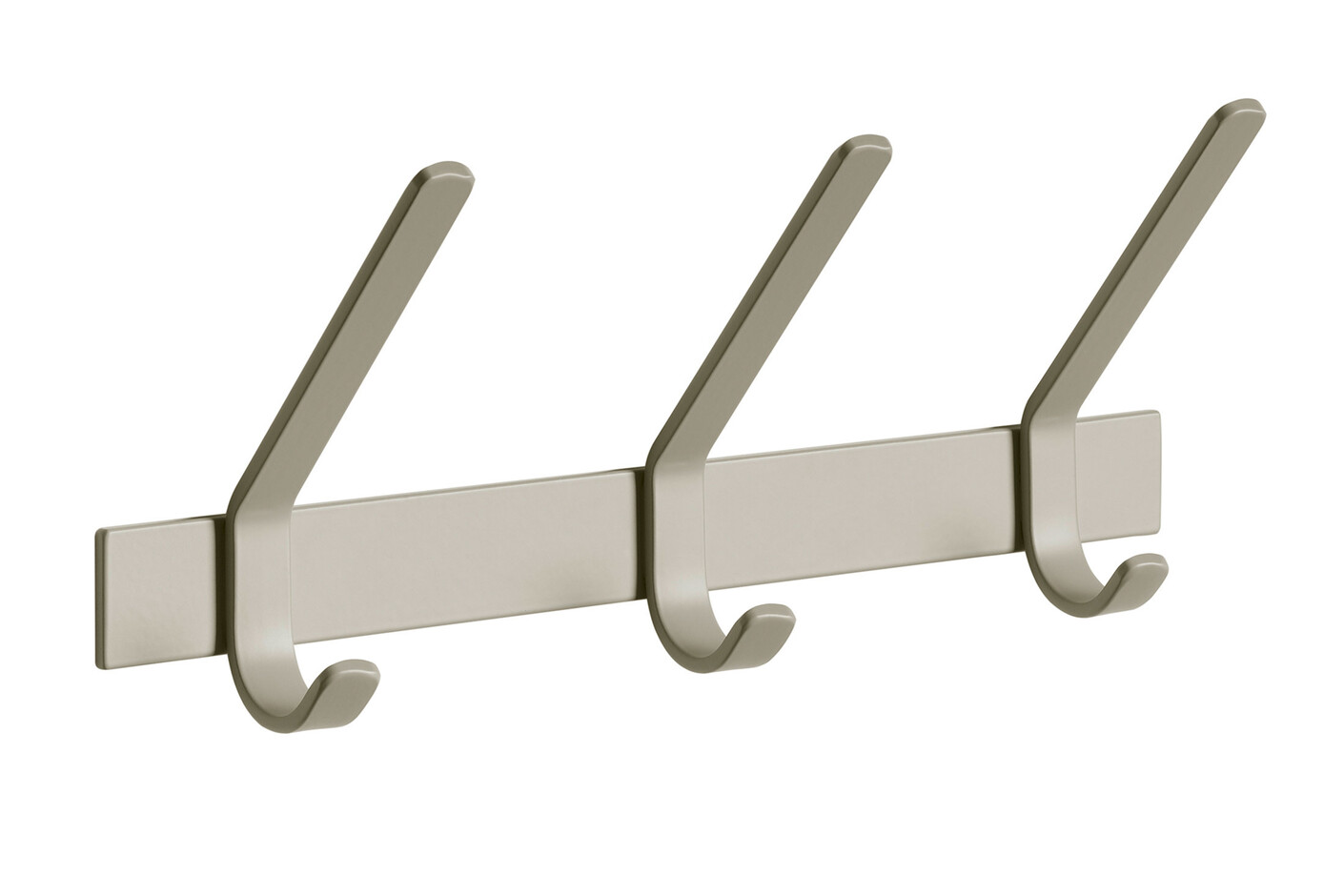 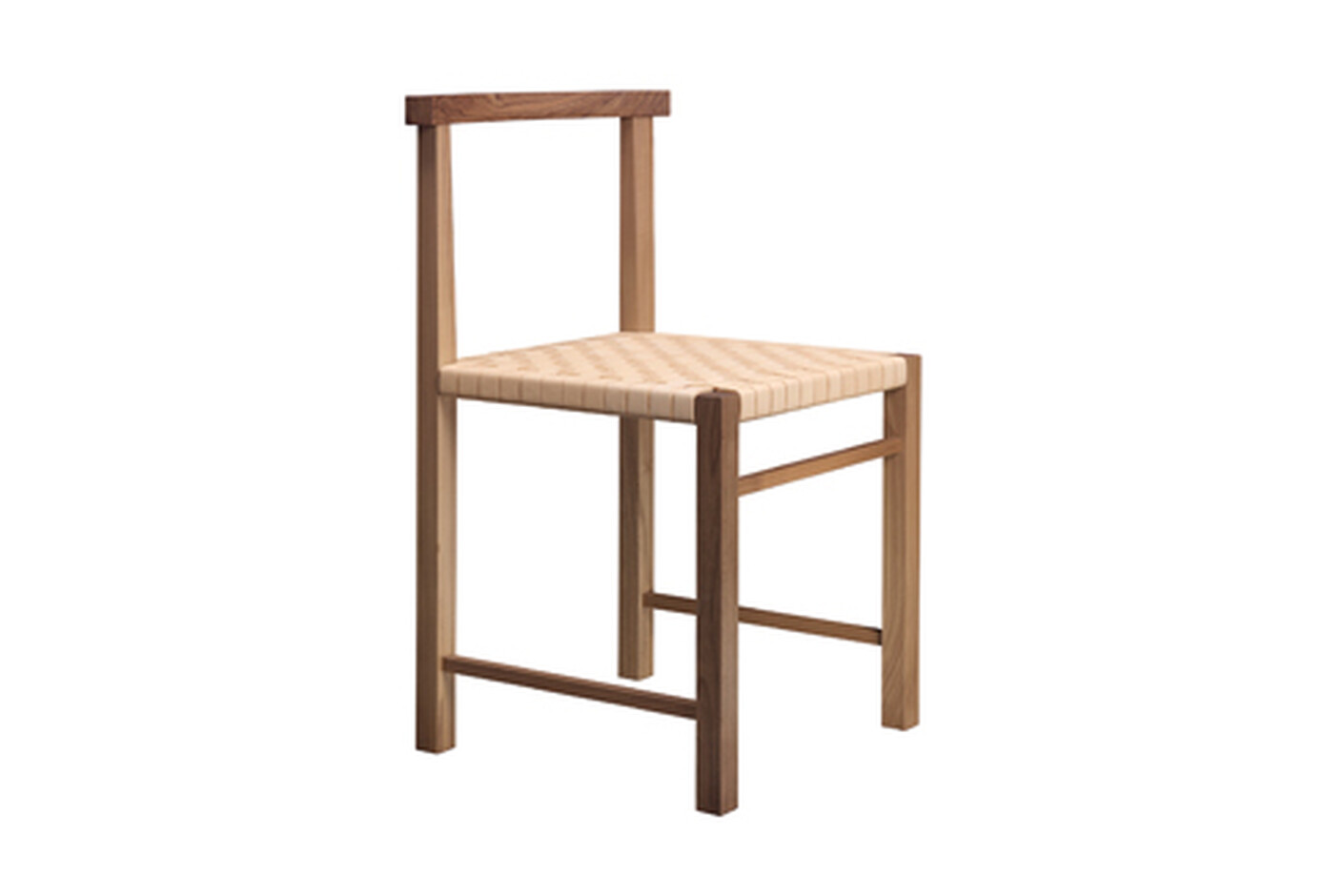 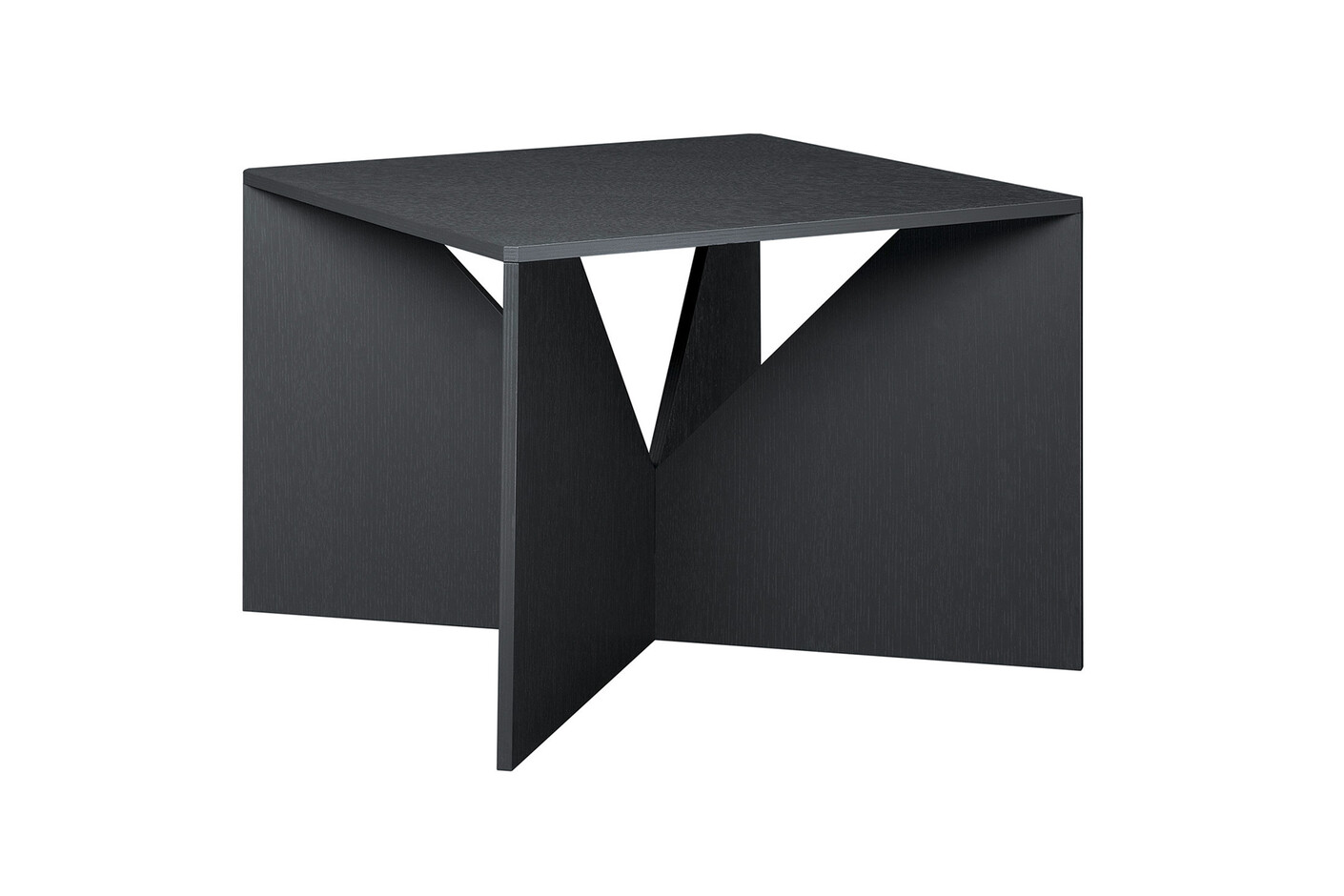