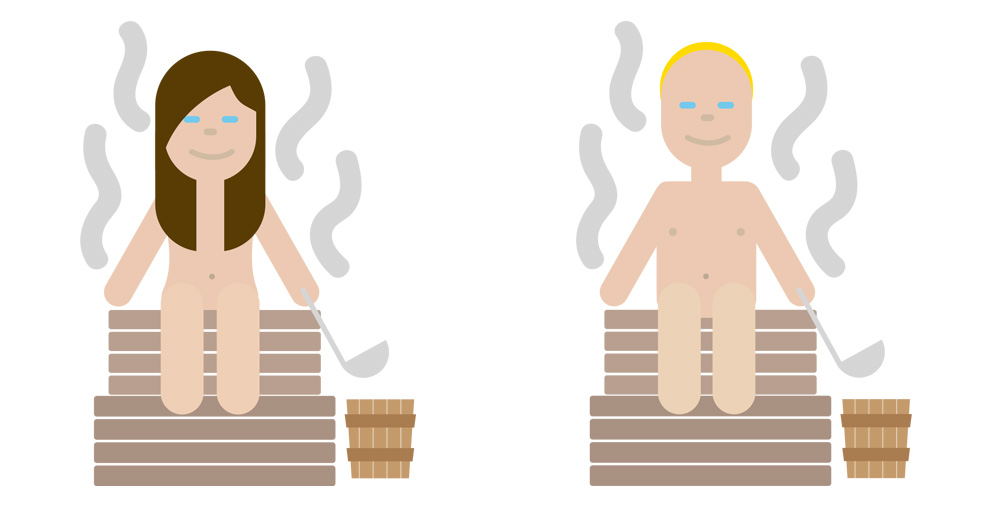 This should not be missed in Finland: Sauna. All Emojis © Ministry for Foreign Affairs of Finland

Do you know what “Kaamos” means? Or “Karjalanpiirakka”? In fact, what do you associate with Finland? No kidding: the sauna. Alvar Aalto? Perhaps, if you’re an architect that is. Not to forget: Nokia – a hangover from the days when Smartphones were still sci-fi. Back then, people already used emoticons to text each other, namely those ASCII characters which, depending on how you put them together, symbolized various different “emotions”. The idea was invented as long ago as 1982 by computer scientist Scott E. Fahlman after encountering misunderstandings with colleagues when relying on written digital communications. Well, or so the cliché would have it, your typical nerd has difficulties when it comes to the finer linguistic nuances of interpersonal relationships, so why not rely on unequivocal symbols to highlight passages that were meant ironically?
As screen resolutions improved, emoticons morphed into emojis – and the range of faces and other symbols used as stand-ins for emotions has rocketed ever since. On occasion, the digital hieroglyphs replace words – or even entire sentences. Not that this has made communications any more unequivocal.

So what does any of this have to do with Finland, you might ask. The answer is simple: as the very first country world-wide Finland (or to be precise the Finnish Ministry of Foreign Affairs) has commissioned the design of an entire set of “typically Finnish” emojis and has published them in a digital Christmas calendar – along with explanations as to what they all mean. So there’s a shot of good old Nordic irony involved, too. For example, there’s the headbanger, after all Heavy Metal is mainstream in Finland and nowhere else in the world is the density per capita of heavy metal bands greater. A half-frozen heart stands for the silent but deep love that Finns can feel – even if he or she never mentions the fact, not even to the person so adored. Needless to say, Martti Ahtisaari and the Nokia 3310 are also include, as is the emoji for sauna-ing – probably an imperative, as there are said to be 3.2 million saunas in Finland, which has a population of 5.4 million.

And so what’s with “Kaamos” and “Karjalanpiirakka”? The latter is the name for a typically Finnish pastry. And Kaamos is what the Finns call that period between December and January, when Lapland is not blessed with any sunlight whatsoever. Perhaps those long polar nights are also the time when the heavy metal bands get founded, because some perma-frosted love has not even thawed in the sauna. Nevertheless, we do miss Alvar Aalto, or at least the outline of his Savoy vase – after all, alongside dark days and moody music, innumerable sauna sessions and endless forests, Finland is also famed for its design and architecture. (AS)

"We tend not to sit down next to anyone if another seat is available. When talking to a Finn, don’t stand too close – unless you want to see a Finn slowly edging backwards." is the description of this Emoji.
Advertisement