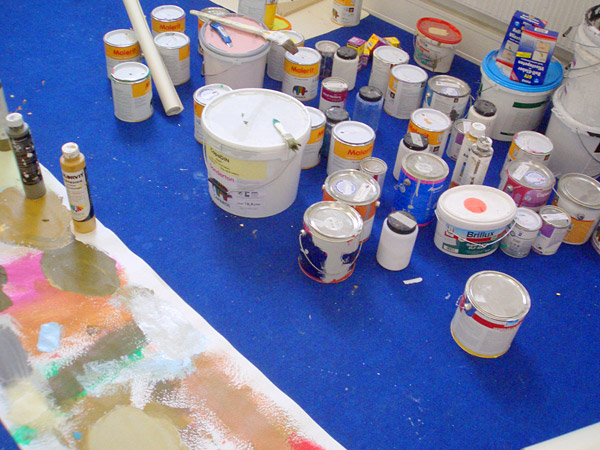 Photo of Claus Richter's studio during the work for The Design Annual 2008 © Dimitrios Tsatsas, Stylepark

"Die Kunst ist super!" (art is super), the title of an exhibition being held at the moment in Berlin, sounds like a battle cry for high-attendance revitalization strategies. The perception of art as an installation to be experienced? Exhibitions are being designed to be box-office hits, culture tourism put together as an all-inclusive packages, and in this time of crisis politicians are even postulating the creativity business as a growth sector with a bright future. Nowadays art, or so it would appear, is a genuine part of society. This current interpretation of creativity is no longer geared to the emphatic concept of an exceptional individual, or example the genius still lingering on from Romanticism; rather, buzz words such as "creative skills" and "being creative" serve as a general description of creative thinking and doing in a cultural and economic sense. The artist, at one time a figure on the edge of society, is mutating into a much-wooed role-model and in resorting to artistic methods of work the booming creative market is coining such terms as "sense-giving imagination", to which the service society will have to measure up...

Art is what an artist does

The artist, a service provider? "Art is what an artist does" is how Bruce Naumann laconically sums up the constitution of artists, transferring the level at which sense is produced from the product to the person producing it. While on the back of the questioning of the traditional understanding of their works that emerged in the 1960s several artists began to see themselves less as creators of autonomous aesthetic objects and more as intermediaries and "experience designers", a change in the public also loomed. Terms such as participation and interaction have advanced since then to become buzzwords for classifying new methods of reception. The formula "the artist as ..." is aimed at the - currently extremely inflated - diversity of artistic role models, in whose wake the public impact and presence of the artist has changed. Whereas until the mid-20th century exhibitions in museums and galleries provided the main stage for art to be presented on, as of the mid- 1960s the opportunities for artistic visibility and with it the calculated exposure of creativity became more complex.

The painter Henri Matisse once said that "creativity begins with seeing", while the critic Carl Einstein, referring to the artist's studio, spoke of an instance for the "fabrication of ideas". Where better to pursue the mood of creativity, surrounded as it is by myths, than at that mysterious source of creative work, the place where the artistic idea takes shape and, on the part of the artist, leads to programmatic displays?

The studio as a place of thought

Starting from the tradition that the artist's studio was a place of inwardness, retreat, and artistic inspiration, with the changed role of the artist the standing of the studio within society and the latter's understanding of public and private is also changing, and incidentally has been doing since the last third of the 19th century. It was primarily Marcel Duchamp's radical model of regarding the studio as free space and a place of thought rather than a workshop that provided the generation of artists that as of the 1960s was critical in it reflections on the studio with an important source. Since Duchamp at the latest the question of how work-sharing production processes become applicable for artistic use is of relevance. With his concept of the ready-made, however, he redefined the artist's role: "The idea," according to Duchamp, "was to find an object from that from an aesthetic point of view was of no attraction at all. If you want, this was not the work of an artist but of a craftsman."

The workshop as a self-portrait

When in 1990 Paul McCarthy presented his California studio, turned through 90 °, and all the objects in it - from furniture and a video splicing station to all manner of bits and pieces and knick-knacks - as a giant spatial installation in an exhibition, he was playing not only with the observers' perception, which he literally turned upside down, he also unmasked to an equal extent the legend of the aura associated with the artist's studio. After all it reminded one more of a handyman or DIY enthusiast's workshop than a genius' "sacred" halls.

Dieter Roth's legendary "Large Table Ruin", which he created on a work in progress basis between 1970 and 1998, operates in a similar way. This is a gigantic collection of material, a workshop that towers up to form a chaotic sculpture, giving the impression that an untiring handyman has just left. Video recordings document the work performed, through which the installation gains the character of a self-portrait.

By exhibiting their working space artists have always adopted a position with regard to the public, their own oeuvre, the work process, and as such to their own role as artists. The insight granted into their studio space suggests authenticity derived from the proximity to the artistic process of creation. Roth' s references to the romantic image of the artist kindle associations with infinite creative power, which even today play a role in the presentation of concepts of creativity, no matter what their nature.

To date the idea of the lonely artist slaving away at his work in his attic, possibly despairing at it has been deconstructed on several occasions. The Constructivists, for example, saw themselves as engineers and felt obliged to work collectively. After World War II the creative act became a fixed feature as a public event. One need only think of Georges Matthieu's painting displays in front of thousands of spectators or Pablo Picasso and Jackson Pollock's painting performances previously on film and in photos.

Andy Warhol went one step further. He was the first to bring together the public and the commercialization of art and created a synthesis based freely on the motto: "Good business deals are the best art". Within the meaning of the division of labor for the purpose of maximizing output and profit the term "teamwork", in other words the collectivization of artistic production, is linked to business contexts. Warhol's legendary Factory was a symbol of this form of productivity, influenced and inspired at one and the same time by the then center of the dazzling art world: New York. The two go hand in hand: the city that never sleeps and an art factory that never stands still. Nonetheless the Factory was Utopia rather than an "engine room" of art, far more display and a stage, on which Warhol celebrated himself and his art.

From the Factory to think tank

In the era of a globalized art market communication and participation are proving to be key elements in contemporary artistic work processes. Olafur Eliasson's studio in Berlin, in which depending on the order situation between 15 and 50 people are employed, is a prime example of this. The team comprises architects, craftsmen, designers, artists and art historians; the studio serves as a think tank and research laboratory, organization office and professional network. It is primarily about keeping the creative motor running, whereby the individual product takes second place to the creative process. In this case the artist's studio functions not just as a place where works of art are produced, but also as a venue for art to be perceived. The studio's creative potential influences our idea of how art functions - that is not only as an isolated object in an exhibition room, but something that produces the link between production and reception, action, decision, experiment and failure in the first place.

As such the field of art appears as the different aspect of a civil society, as an area with heterotypic qualities. By "hetereotopias" Michel Foucault meant spaces, which in all cultures exist as "counter placements or an abutment, as utopias that have been actually created, in which the real places within the culture are at one and the same time represented, disputed and turned round."

Photo of Claus Richter's studio during the work for The Design Annual 2008 © Dimitrios Tsatsas, Stylepark
Advertisement