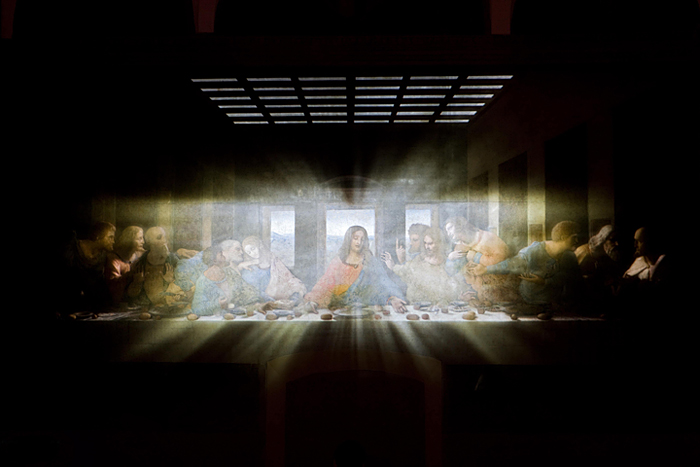 Leonardo da Vinci's very fragile "Last Supper", painted in egg tempera on a wall of the refectory of the Church of Santa Maria delle Grazie, is the pride and joy of Milan. So after the typical arguments, concerned for the safety of the carefully and arduously restored mural, the City of Milan decided to not grant director Peter Greenaway permission to himself realize his cineastic project relating to the "Cenacolo" at the original location. Yet even without the latter's aura, the spectacle was no less pompous, as Greenaway had the outline of the refectory recreated in Palazzo Reale - even including the portal in the middle of the wall, which now boasts a copy of the painting. At the end of Leonardo da Vinci's "Paragone", his famous debate on who can lay claim to dominance in the "artes", his praise of the visual is astonishingly strong. Among all the forms of insight that grasp the whole man, so da Vinci suggests, that field is above all perfect in which artists work: in the activity of the engineers, as regards mechanics, and in the creations of the painters. Only these two disciplines, he says, get to the heart of discoveries in the visible world. "We have the eye to thank," da Vinci wrote, "for the fact that the soul is content with its human dungeon, which would become a torment without the eye." It is preferable, he suggested to lose your hearing, sense of smell or touch than your vision. "Do you still not see," da Vinci exclaimed emphatically, "that the eye grasps the full beauty of the world?" Unlike Leonardo da Vinci, Greenaway's pathos-filled and operatic show does not just appeal to the eyes. He opts for a multimedia and synaesthetic approach, using all sorts of sound and lighting effects. To the sound of artificial strings, the painting's dinner table has been recreated in white plaster and placed in the middle of the audience, where it gleams, first in cool blue, later in blood red. "The glow of light," da Vince wrote, "i.e., the gleam of any random object, does not lie in the middle of the section illuminated, but will move as much as the viewer's eye moves." And Greenaway moves it a lot, has the eye chase constantly from one sensation to the next. On one occasion, in the effort to instill the occurrence with life, the shadow of the cross in the window falls across Jesus and the Disciples, on another the image seems to be illuminated step by step by a hand-held spotlight, whereby the Messiah and his companions seem so life-like that they could be carved and painted figures. And then, spectral light fans out from the three window niches in the background, highlighting on the hands and faces.
On the wall opposite, the face of St. John suddenly appears, enlarged to monumental proportions, until our gaze is taken into the microscopic level and all that remain are the color and plaster particles of the decrepit painting. As if raised up by invisible hand, they emerge from the background are start to float through imaginary space where they form a strange craggy landscape.

So what should we believe? That the salvation is threatened by decay? That the color particles that fly through multimedia space of their own volition then assemble to form a picture like da Vinci's? That our gaze gets lost in mere matter and "the full beauty of the world" dissolves into dust? At the end of the day it is solely da Vinci's painting that creates the magic. And Greenaway takes up the painting's thrust. After all, painting is simply the highest of the arts, and Greenaway the man who illuminates it. 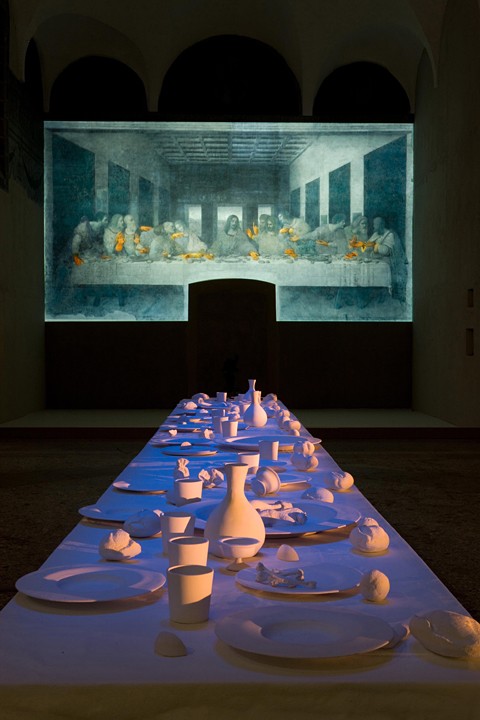 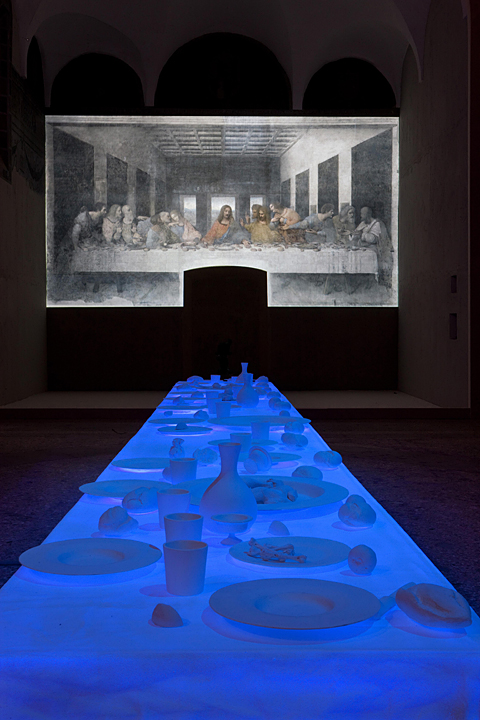 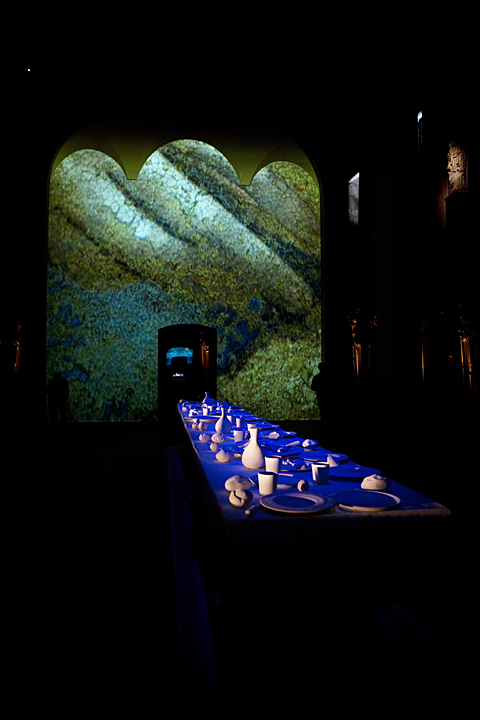 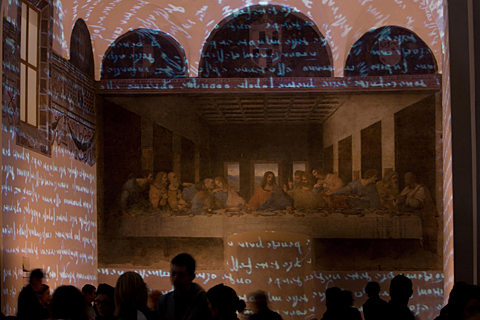 All Photos by Luciano Romano for Change Performing Arts
Advertisement