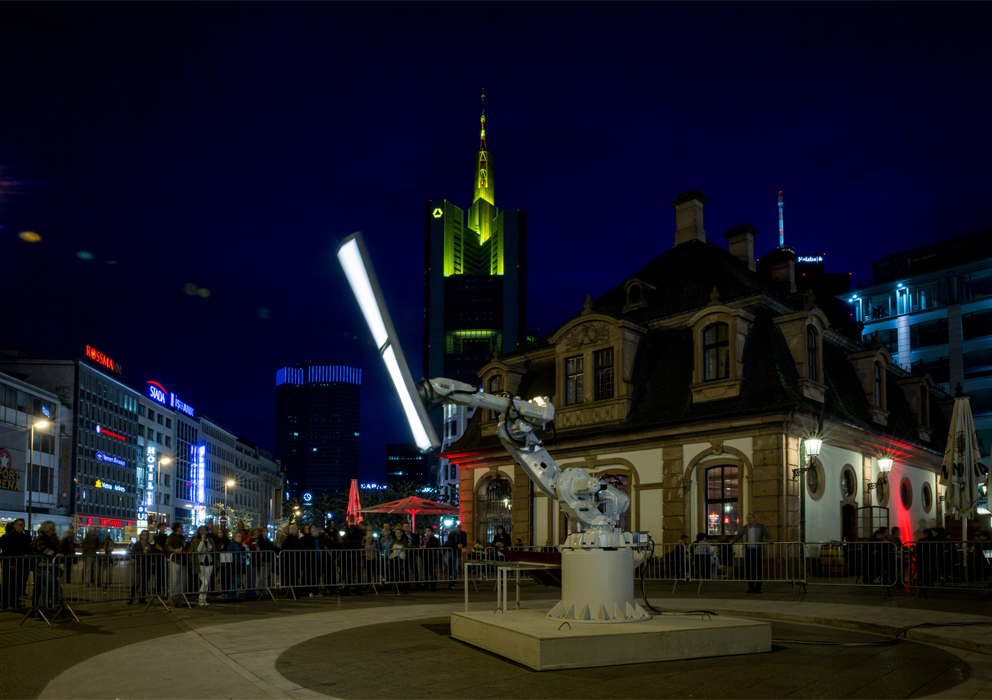 With superhuman precision, the robot performed its programmed choreography during the Luminale. Photo © Adam Drobiec, Stylepark

The manner in which this action artist moves its joints in the middle of Frankfurt’s Hauptwache plaza is a tad stiff and monotonous! During the Luminale, the one or other visitor gazed in off-put amazement at “ArKata”, the white industrial robot in Frankfurt’s main shopping pedestrian zone. With frightening precision, the three-meter-high machine went through its motions. Its grabber arms never tired in lifting an object off the floor (during the day a protective canopy, at night a light), turns on its six axes, and then places the object back on the ground in front of it. The unchanging choreography had a hypnotic effect, a robot dance reminiscent of East Asian martial arts.

Artist group realities:united used the occasion of the start of this year’s Light + Building trade fair to address the issue of building automation at the cultural level. They’d planned the project for some time, but not until ABB came on board with financing was it possible to realize it in this form. In 2013 the kinetic installation was already to be seen at the “Urban Lights Ruhr” light-and-art festival, where it was entitled “Sender”. At the request of Helmut Bien, the Luminale’s curator, the robot was also to take the stage in Frankfurt, to which end it was specially repainted and reprogrammed.

The idea was consciously to avoid a spectacular presentation, and the robot’s movements are therefore slow, almost meditative. Daniel Mock of realities:united took the opportunity to talk with Luminale visitors and therefore spent two days on location. Responses to the installation could not have differed more. Some people stopped and enthused, while others just shook their head in disbelief. That automation need not always be equated with sci-fi super-speed was something many found a bitter pill to swallow: “Too slow, too one-sided, a manufacturing robot can do a whole lot more!” some disappointed passers-by commented. Evidently they would have preferred a Kung Fu master to the circumspect “Tai-Chi Android”.

Daniel Mock is nevertheless satisfied. As an action artist who addresses architecture in the multimedia age he hopes the installation will trigger public dialog. And since the one or other person was provoked by the art he is achieving his objective. What counts is debate. “Automation by new technologies is no longer restricted to industry, but has long since permeated the cultural domain. It is already noticeable in our architecture; media façades are but the beginning. Architecture is no longer static, but moves. Transformation by the new design methods is an arduous process,” Mock says. Just like ArKata’s calm motions prompt helplessness, enthusiasm and indignation. Causing a fiery controversy, and thus seems to do what culture is meant to do. 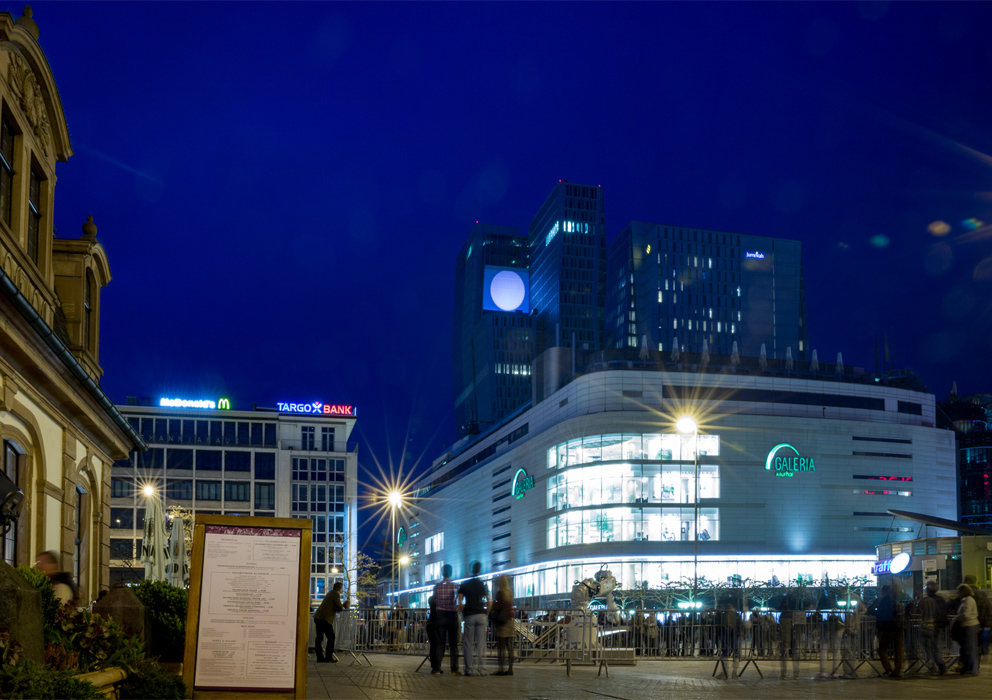 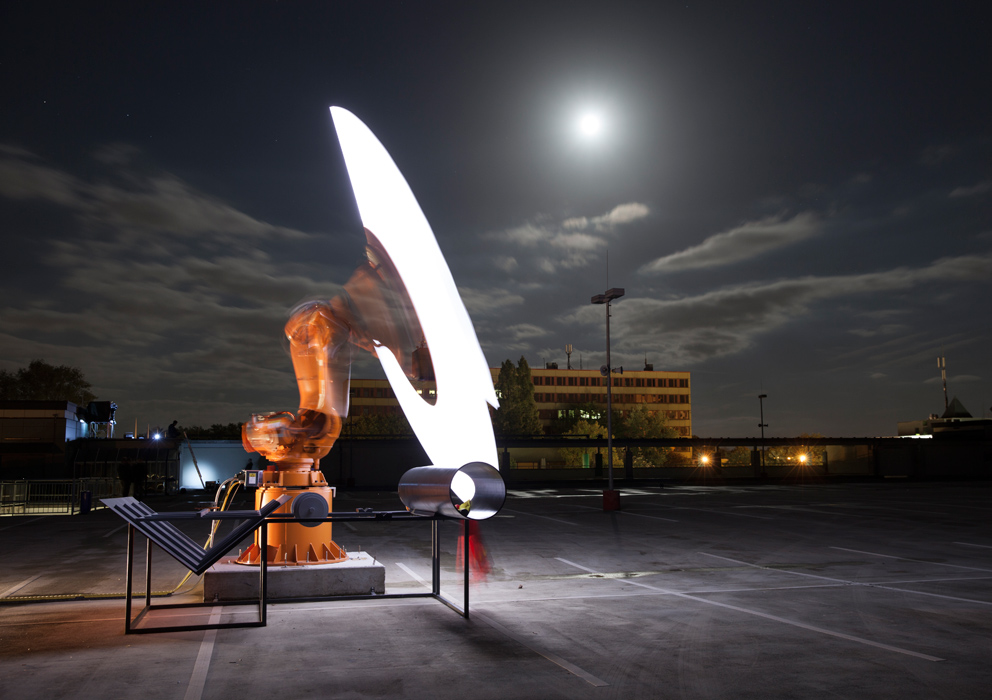 “Sender” was absolved of having to function purely as an industrial robot and thus showed its artistic potential. Photo © realities:united 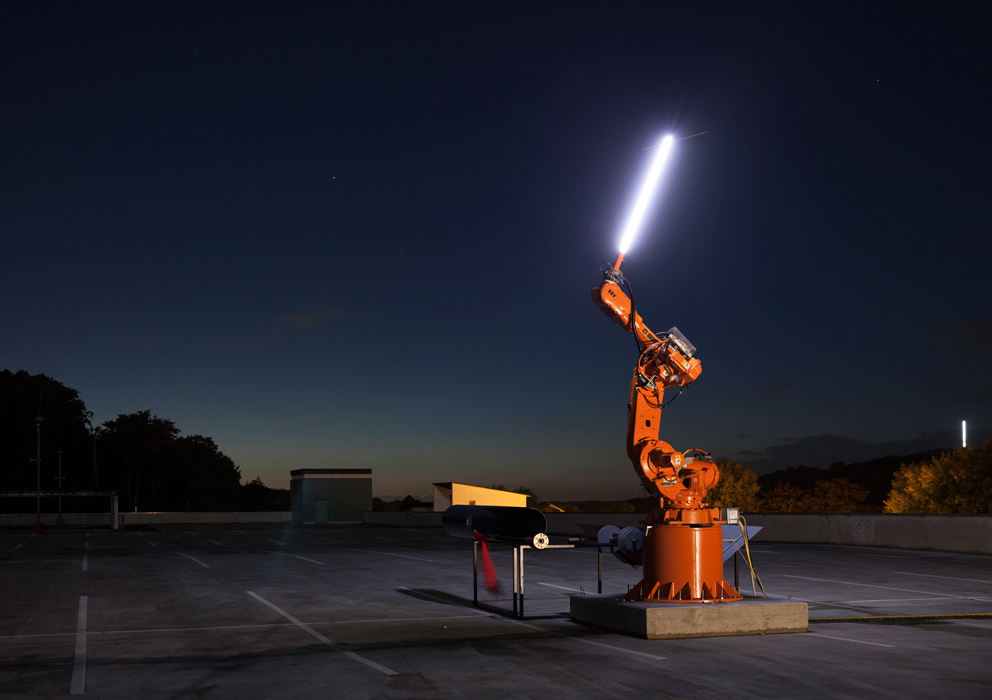 The predecessor was “Sender”, which took to the stage in 2013 as part of the Urban Lights Ruhr festival in Bergkamen. Photo © realities:united
Advertisement