In 2102, there's an El Lissitzky Airport in Perm, in 2201 a multifunctional bridge in the form of a red and black star spans a deep valley in Peru, in 2241 artificial icebergs, with the features of famous polar explorers, drift in the North Sea and in 3021 a monumental double helix spirals into the sky over Western Siberia.

Pavel Pepperstein is probably the only artist in Venice, who, in small water colours entitled Landscapes of the Future, deals quite openly with utopia, even if regrettably he medially overstages the small, delicate works of art in the Russian Pavilion in an alarming way. But he only makes use of the Utopian to transform tangibly abstract principles and forms, as propagandized by the Russian avant-garde, and take us for a ride. This cryptic dalliance is far removed from the furore of the futurists. The voracity of high-tech, industrial mass production is imperceptible, the ambivalence of the modern and alleged supremacy of art caricatured.

Victory over the Future

The group exhibition curated on Russian territory by Olga Sviblova is rather cockily entitled "Victory over the Future". It alludes to the futuristic opera "Victory over the Sun" created in 1913 by Mikhail Matyushin, Alexei Kruchonykh and Kazimir Malevich. Whereas, in retrospect, the opera has proved to be the harbinger of the catastrophes of the early twentieth century, so from the curator's perspective, her biennial show is only intended to reflect the current crisis. As unconsciously illustrative as most of what she presents is, one definitely gives more credence to a crisis of artistic expression and the triumph of the past over the present.

Were it not for the fact that Tommaso Filippo Marinetti's "Futurist Manifesto" celebrates its centenary this year, futurism wouldn't be a theme for discussion. But because of this, the aggressive vision of the future turns into a superfluously created historic backdrop, the function of which remains unclear. Not even Venice has emerged unscathed from the pushing and shoving of historic scenery. Its manager of the future, a critic of the inertia of the Italians and their culture, could cheerfully have ripped it up. This notwithstanding, there's no need to worry about Serenissima because the artworks, which are loosely based on futurism, have all proved to be harmless illustrations.

Sergei Shekhovtsov lets a motorcycle, for him nothing more than a symbol of power, break through the wall of the Russian Pavilion, like in a bad action movie; and when a motorcycle attempts to break into the art sphere in the Australian Pavilion from the outside, it still fails to reach the White Cube, which in itself leads to the conclusion that dynamics and speed are ingredients of modern life. The roll of thunder of Marinetti's prophecy of an accelerated, faceless society established on machines, conflict and double quick time, is only audible from a distance. As it is, it has long been a reality, from the acceleration of all areas of life, the faceless industrialised society and the omnipotence of technology to the omnipresence of the motor car, which started the cannonball ride in the first place. The rest is history.

Kitsch instead of futurism

Filippo Tommaso Marinetti, a combination of upper-class poet, aesthetic and magniloquent preacher, would have been particularly pleased with the "homage" rendered to him in the new Italian Pavilion in the rear section of the Arsenale. What is on show there under the title "Collaudi", was quite rightly described by the critics, as soon as it opened, as a declaration of the bankruptcy of Italian art and a disgrace afforded by the Ministry of Culture.

Although the twenty artists involved nationally, who range in age from thirty to fifty, include such famous representatives as Sandro Chia, Marco Cingolani, Luca Pignatelli, Nicola Verlato and Masbedo, this doesn't help. The fact that all the works have been created specifically for the exhibition only makes matters worse. One seldom sees so much decorative kitsch with as many unclear, woolly references to the present of the past, all in one place. One would definitely rather not imagine, what Marinetti would have done with what is intended as an official homage to him. Curse at them, shoot them, run them over or shoot them down in flames at the very least, to get his revenge on the creators of so much cheap arts and crafts tat, which has as little to do with futurism as with neo-futurismus.

Only life rafts can help here

Anyone who leaves the hall, flushed with annoyance at so much incompetence, will be particularly happy with the life rafts, which Tamara Grcic has strewn across the old floating dock immediately opposite. She named her installation "Gaggiandre" after the place, they refer to. Fortunately, Grcic doesn't care two figs about futurism thus allowing her installation to be all the more distinct, precise and inspiring contemporary art.

Seventeen orange-red life rafts bob up and down on the shimmering water, which is sometimes pale turquoise and sometimes dark like Veronese green, beneath the roof of the old shipyard halls. Microphones record the sounds and loudspeakers emit a strange mixture of voices, slamming doors and Morse code. Thus, in an interplay involving an optical and an acoustic sphere, Tamara Grcic creates her own area, a kind of parallel space, where surprisingly a benign atmosphere prevails. On the contrary - deliverance seems possible. One can escape, safe in one's own little space, a floating island. These floating islands may be isolated, each one a separate entity but atmospherically linked to one another via the acoustic space around them.

What happens here is not an observed shipwreck, no media-circulated pictures of the boat people or African refugees, who land everyday on Mediterranean islands belonging to Italy or are plucked from overloaded bathtubs in the open seas, are called for here to create the feeling of being transported to a different place. These islands of the blessed rescued bob up and down on the water escaping the frenzy of voices, which whiz around the globe and get inside our heads and metaphorically putting an end to the media odyssey of feelings, a combination of sympathy, powerlessness and anger. In the silent intensity, which Tamara Grcic's "Gaggiandre" uses to avoid the panic noticeable in many places, calms the eyes and ears and transforms the former wartime harbour into a place of refuge, the installation counts as one of the best to be seen in Venice. Isn't rescue precisely this - being able to deviate somewhere else in moments of danger?

Even so, questions linger in the memory. Do we need to be saved? Can we actually be saved? What might a truly new futurism look like? When it comes to historic "Futurismo", it is ultimately left solely to the little gallery exhibition "Macchina di Visione. Futuristi in Biennale" in the Ca' Giustinian, the seat of the Biennale management, to put the historic associations straight, based on photographs showing how the work of the futurists was presented in Venice in the twenties. 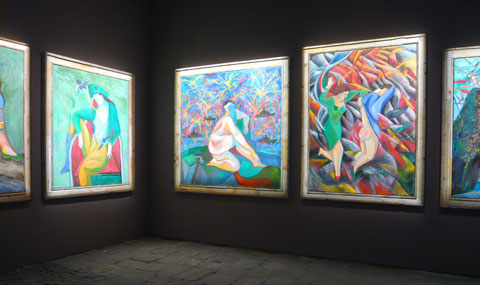 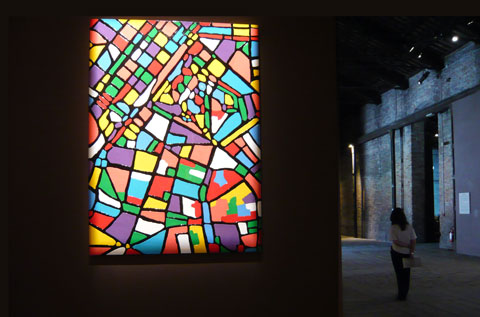 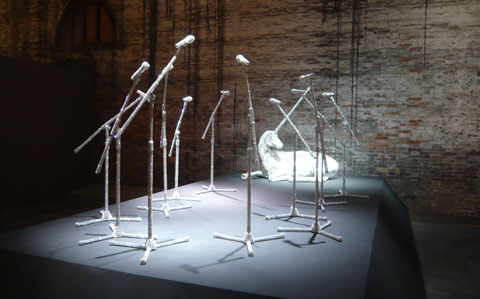 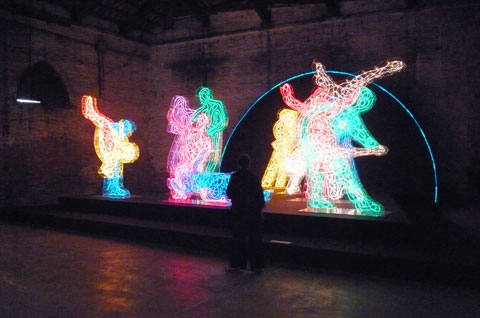 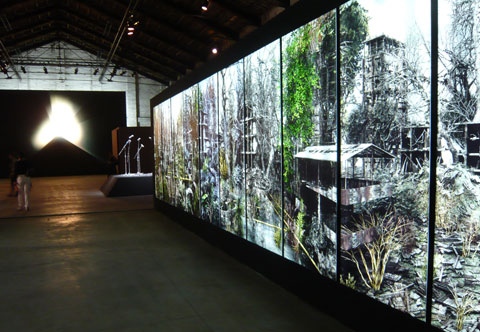 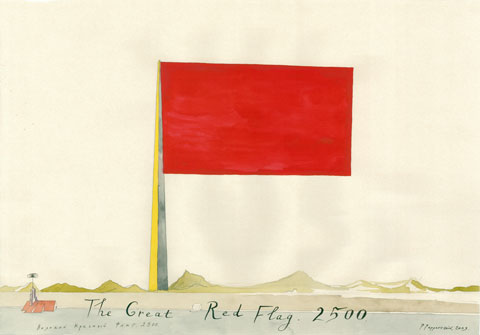 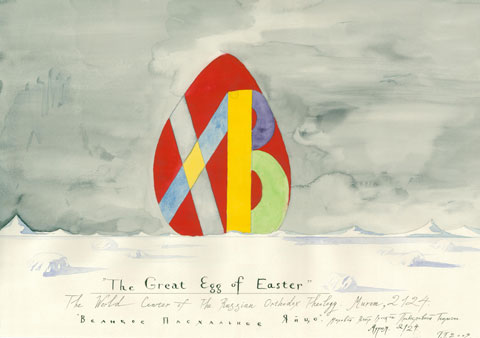 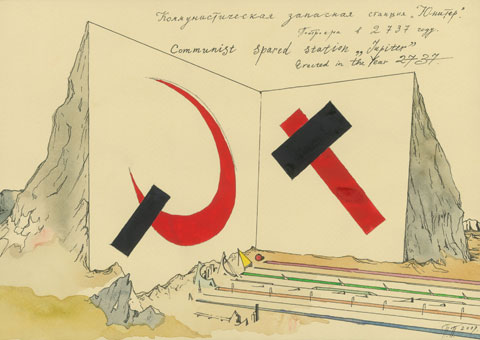 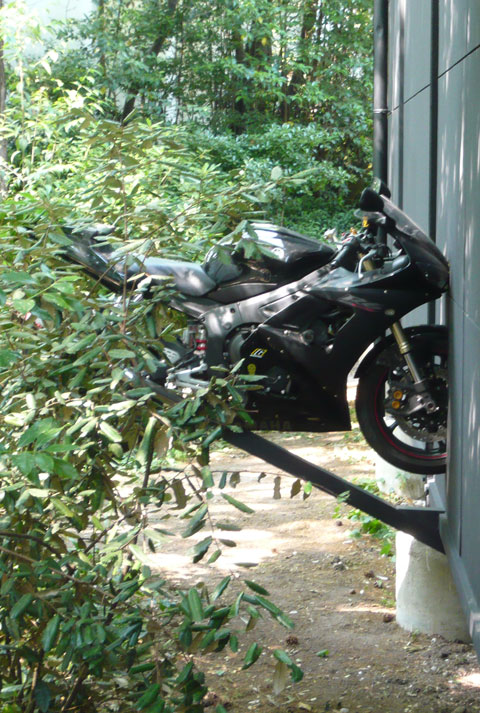 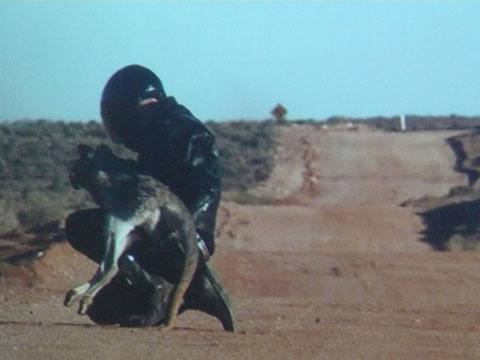 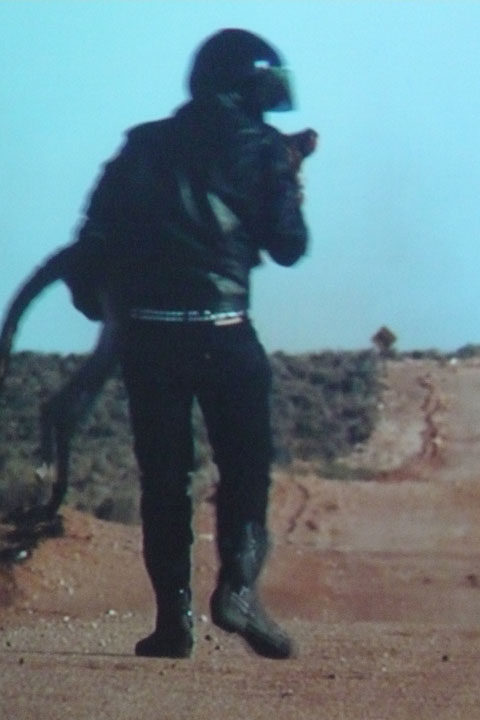 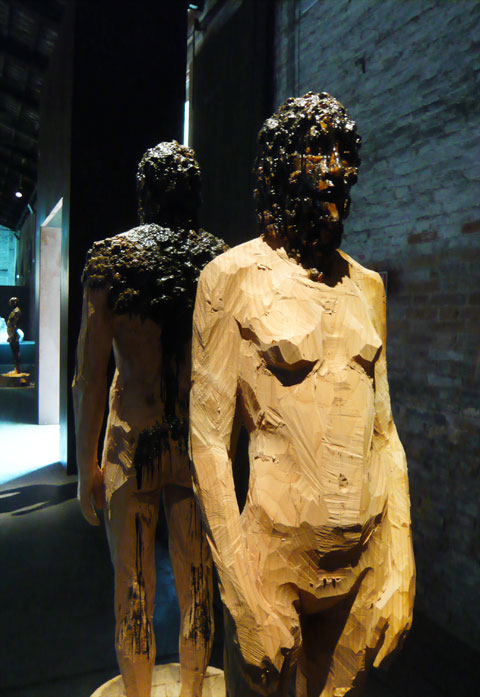 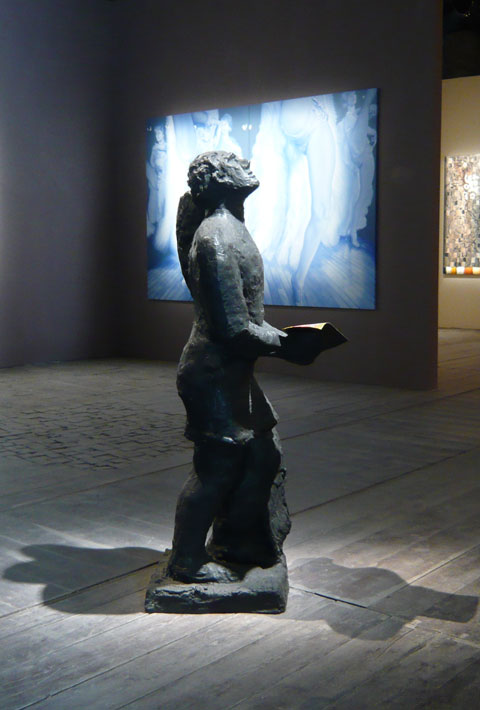 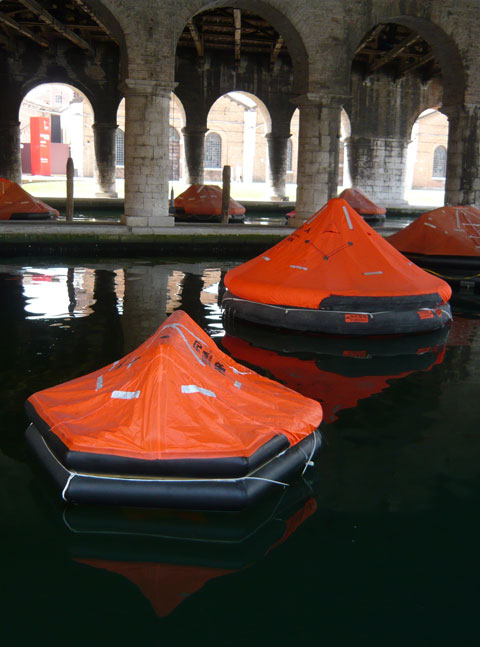 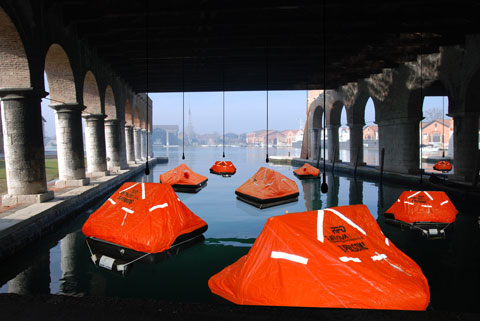 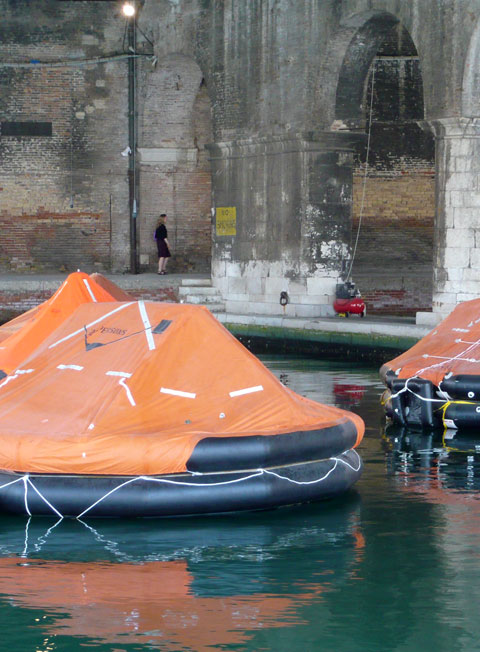 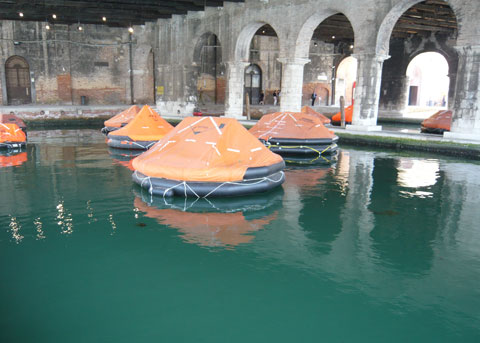