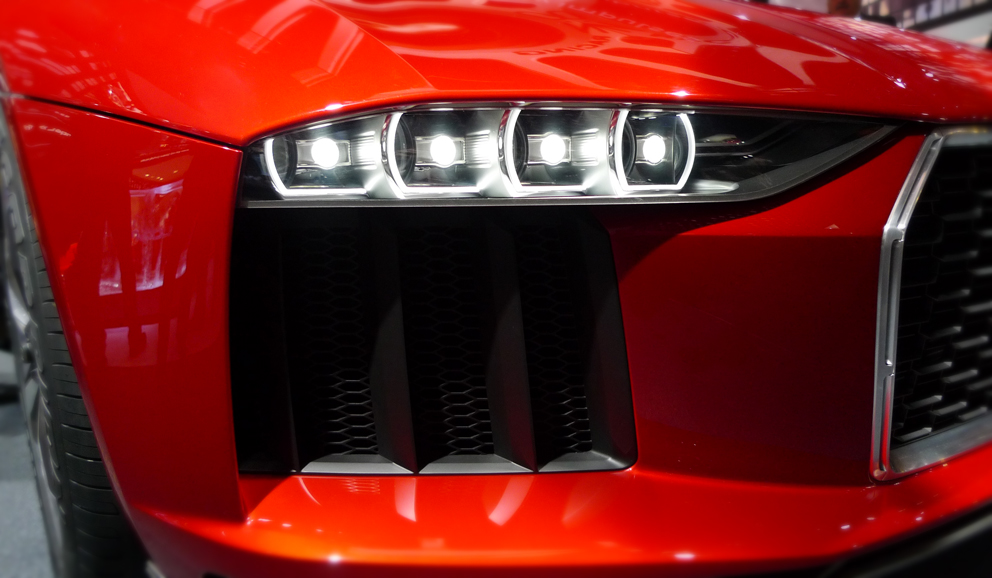 They’re descended from lanterns the way automobiles are from stagecoaches. However, at this very moment headlights, and with them the entire lighting technology used in cars, are about to take a quantum leap forward. As with lighting for offices or homes, a key role is being played here by the turn away from incandescent and halogen lamps in favor of switching to semiconductor technology in the form of LEDs and OLEDs. The changes seen in the Noughties include the integration of formerly clearly separate components into a single complex lighting unit that also entails an indicator, fog lights and daytime running lights. In the next step, automobile lights will become part and parcel of a vehicle that increasingly navigates automatically.

A short history of bright lights

Only a few decades ago, car headlights tended to be round. The standard component used a paraboloid reflector and ensured most autos we would now term vintage cars had more of a quaint that an aggressive appearance. It was up to the designer’s ingenuity to make use of the element, whereas today things are signally different: For each new model the lights have to be reinvented as a free form.

Back in 1974, when the first VW Golf rolled off the belts, external designer Giorgetto Giugiaro and then VW Head of Design Herbert Schäfer argued over whether it should feature modern rectangular headlights or the cheaper round versions. The Wolfsburg decision-makers focused on costs and went for the simpler solution. Possibly it was this thrifty version that enabled the car to combine past and future.
A little later, in 1967, the designers in the team headed by Robert Opron busy revamping the Citroën DS came up with a headlight system that preempted current trends. Instead of individual round headlamps they went for double headlights integrated flush with the car’s body. The headlamp on the inner right and inner left was linked to the steering column and thus illuminated the curves better. Both headlights were inserted deep into a kind of eye socket over which a glass cover curved. It was an early predecessor of today’s free-form headlamps. Not only in formal terms, much has changed in automotive lights since.

Round the bend: cornering lights

Nowadays, you can illuminate more than just the blacktop and roadside directly in front of the vehicle. You can switch on “static directional headlights” at low speeds when downtown to illuminate the corner ahead and as soon as you straighten out it slowly dims. For higher speeds, some manufacturers offer swiveling headlamps for “advanced front-lighting systems” that analyze the road ahead and correspondingly adjust the area covered by the cone of light. The countless drive assistance systems, above all in the premium class, tend to feature an automatic beam switch, usually as an optional extra. A camera in the rearview mirror recognizes cars coming the other way or ahead of you, and at slower speeds the system switches to low beam. This technology for controlling high and low-beam lamps automatically is by no means mature: “Vehicles up the road ahead are on occasion noticed far too late,” and, or so the German automobile club ADAC continued recently, even some of Germany’s leading marques “really dazzle other drivers when the system malfunctions”.

“Variable light distribution” or “adaptive high-beam assistance” systems that change lamp settings and strength depending on your speed, the road and weather conditions, are the latest top-of-the-range rage. A camera and sensors analyze the driving situation. A so-called light roller is inserted between the lamp and the lens allowing the height of the movable headlight element to be adjusted. The technology is available for both xenon and LED systems and means that when driving on an interstate the light has a far longer range. In other locations, the beam can be broader or narrower, more intense or dimmed, depending on what driving and ambient conditions require. The sensor-controlled swivel beam only sheds light where it is needed – and only there. Audi first presented the system, developed together with its component supplier Hella, in the Audi A8 in 2010. In fact, the 2013 Audi A8 now boasts an LED matrix light. The high-beam light is subdivided into separate zones and as you can now individually control each light diode, the system no longer requires a mechanical light roller.

In light of the future: OLEDs

It’s unlikely that organic lighting elements (meaning OLEDs) will emerge in mass production quite as swiftly as LED headlamps won the day – at least among the top-of-class autos. Unlike LEDs, they are not yet suitable for low or high-beam lamps, and are more likely to be put to use for taillights. Osram is one manufacturer already dreaming of components that can be attached as a foil to the car body. The rear lights would then no longer need to be integrated into the car body, but could simply be attached to it. Osram wants to have OLED components ready to roll as braking lights and tail lights by 2016. However, the electronic component is at present still overly sensitive to high temperatures and the price is still out of this world. In the long term, though, OLED components could, like LEDs before them, significantly reduce the weight of a vehicle, saving mass and energy. A highly welcome effect, irrespective of what drive powers the automobile of tomorrow.

Over and above the actual or purported innovations (read: rational factors), emotional aspects play a crucial role in automotive lighting. Each marque has long since developed its own design for daytime and nighttime running lights. They guarantee ready recognizability of the car from a distance at night and give it an unmistakable silhouette during the day.
Last year, in an article on changed automobile lighting design Alice Rawsthorn, the New York Times’ design critic, found that designers like to exaggerate when it comes to visualizing new technologies. The “shamelessly flamboyant” car lights that have frequently appeared on our streets of late will, she suggests, become increasingly common in the future. Their “surreally intricate forms” she assumes will soon crop up in other products. And not only the pending spread of three-dimensional printing will foster this. The combination of technology-driven headlight design and mass production of cars is enough to make your hair stand on end. And the IAA auto show last month did nothing to allay the fears. In fact, while in the 1990s the focus on purportedly streamlining shapes led to a quagmire of lookalike designs, it’s now the despairing attempt to stand out that is prompting ongoing stagnation in auto design. Because not only do the marques and models differ, but even the lighting design has to be special in each instance, and willful design exuberance has thus gained sway. By contrast, at the IAA there were few logical shapes or functional products on offer. Indeed, designers do not even shy away from giving their ideas an iris, a lid line or eye lashes – or other attributes from the animal kingdom or the human world. Perhaps it is this excessive glittering stuff that makes so many cars today look that slightly bit silly?

The clean turbos of tomorrow: It’s clear from the show cars at the Frankfurt Motor Show: Automobiles in the future will be smarter and cleaner. (17 September 2013)

Pegasus with branded grille: What do the showcar studies at the IAA tell us about the design of tomorrow? (17 September 2013) 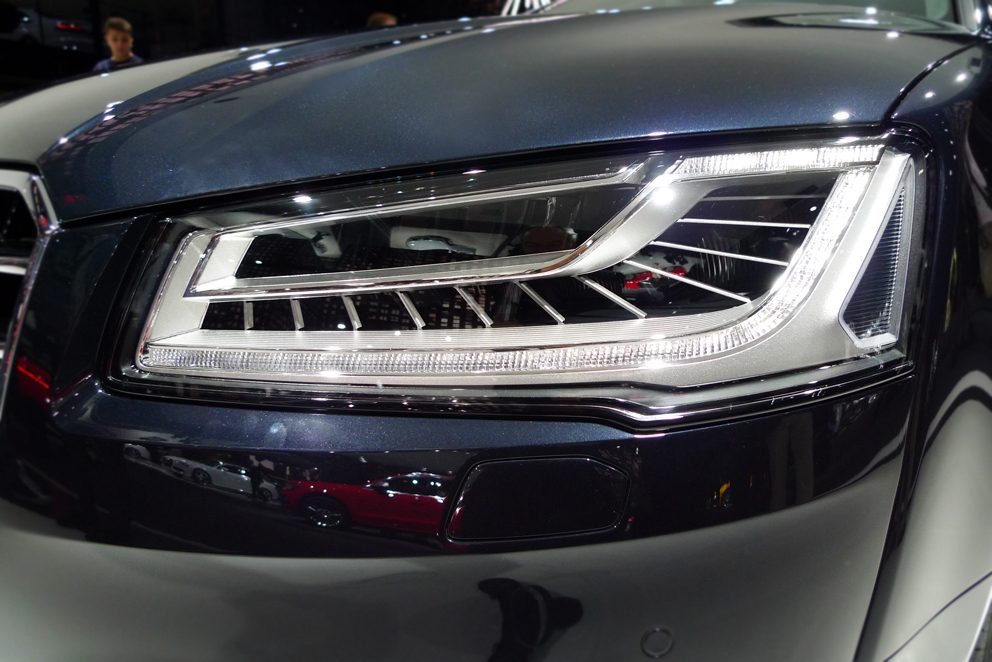 The LED Matrix light is also used in the new "Audi A8". Here, the main beam is divided into individual zones. Photo © Thomas Edelmann 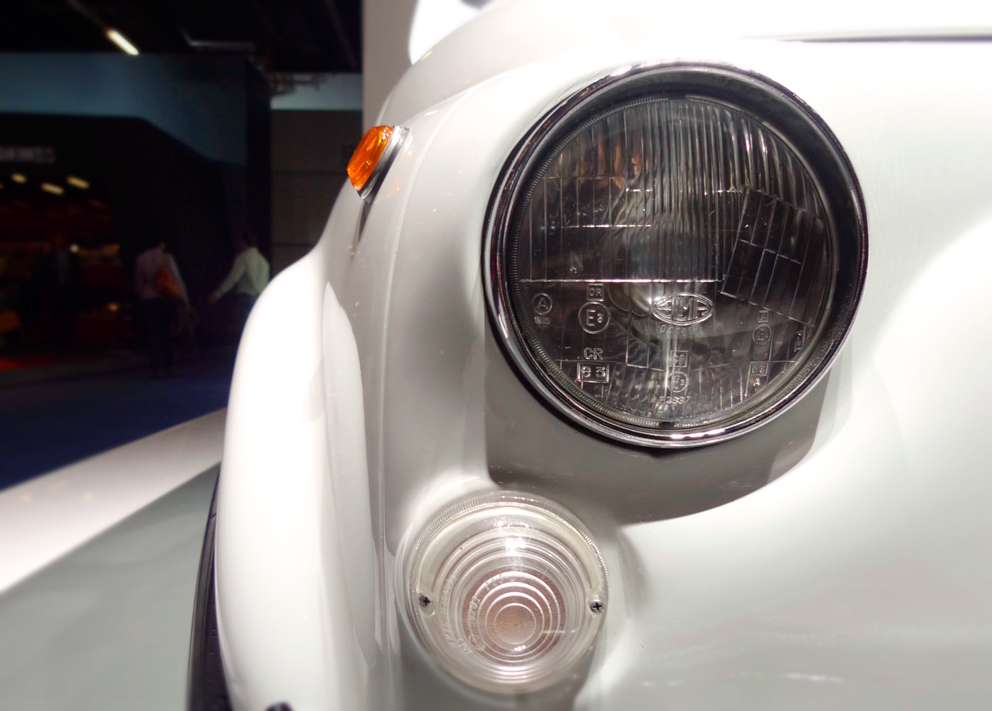 Lighting time: fifty years ago, the "Fiat 595 Abarth" had round headlights and a side-mounted turn signals. In the 2013 anniversary model bi-xenon light is lit. Photo © Thomas Edelmann 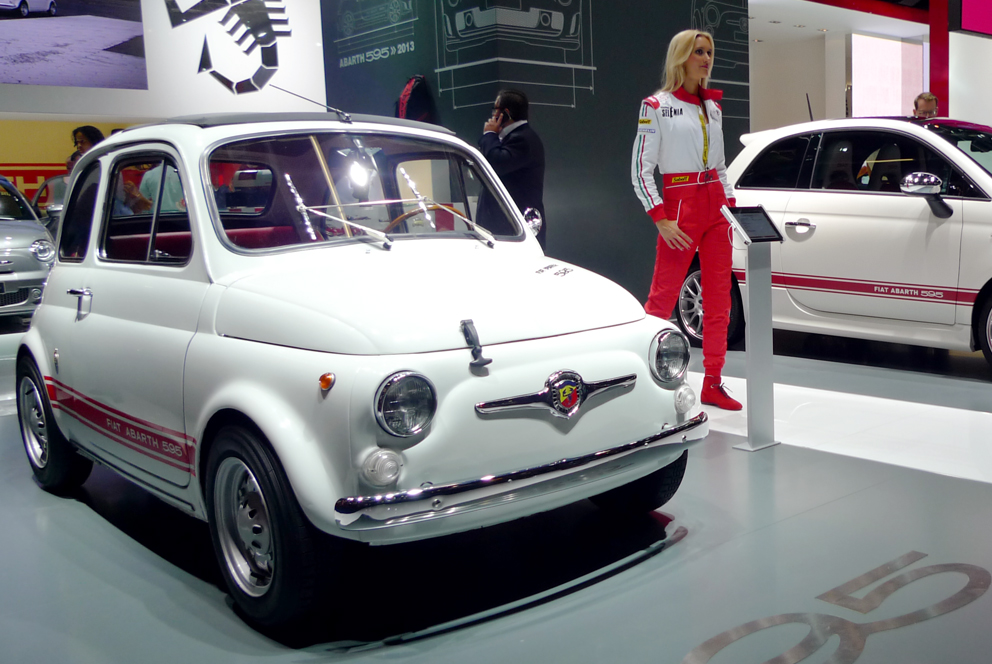 Like the original from 1963, the modern „595" is offered only in matte white with red trim. Photo © Thomas Edelmann 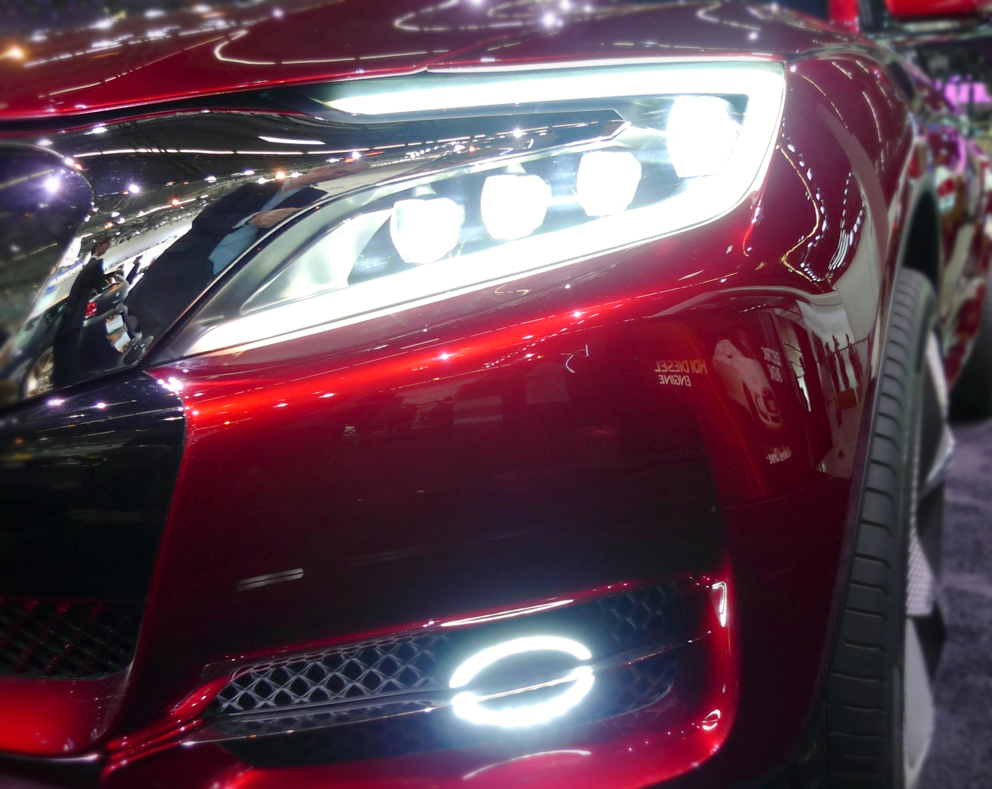 Features of the "Citroën Wild Rubis" are the headlights with raptor look. Photo © Thomas Edelmann

"Kia Niro" surprises with unusual "Ice cube style" headlights. The rear light unit is divided into two parts and is located at the rear flap and the carriage. Photo © Thomas Edelmann 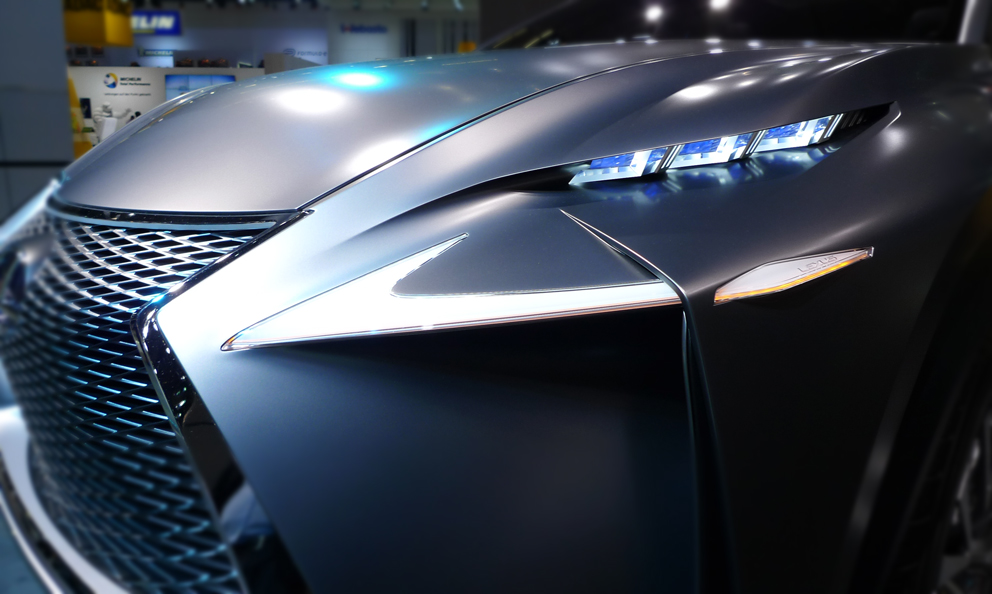 Corners, edges and angles: the front of the „Lexus LF-NX" is very distinctive and looks aggressive. Photo © Thomas Edelmann 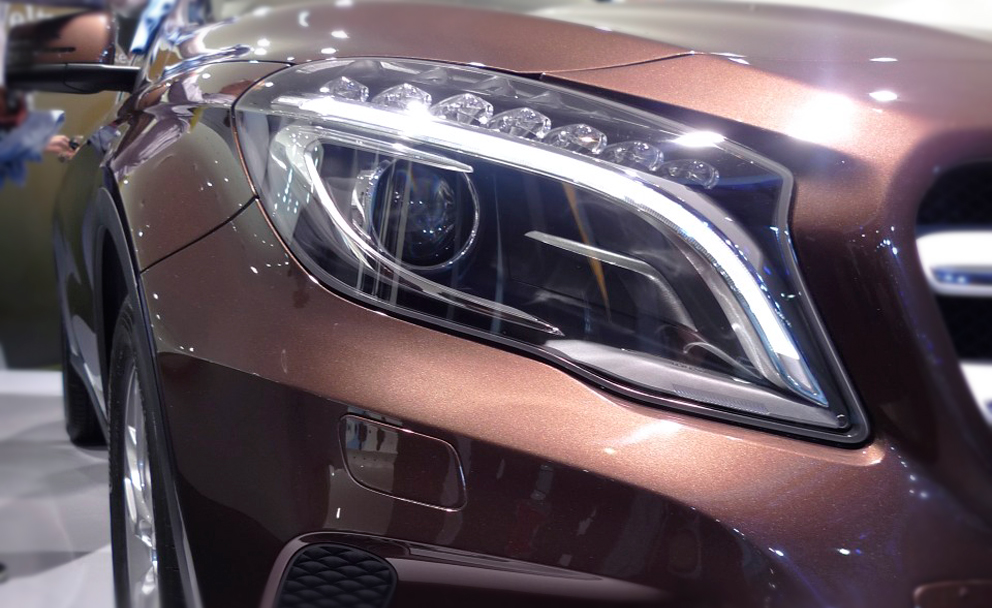 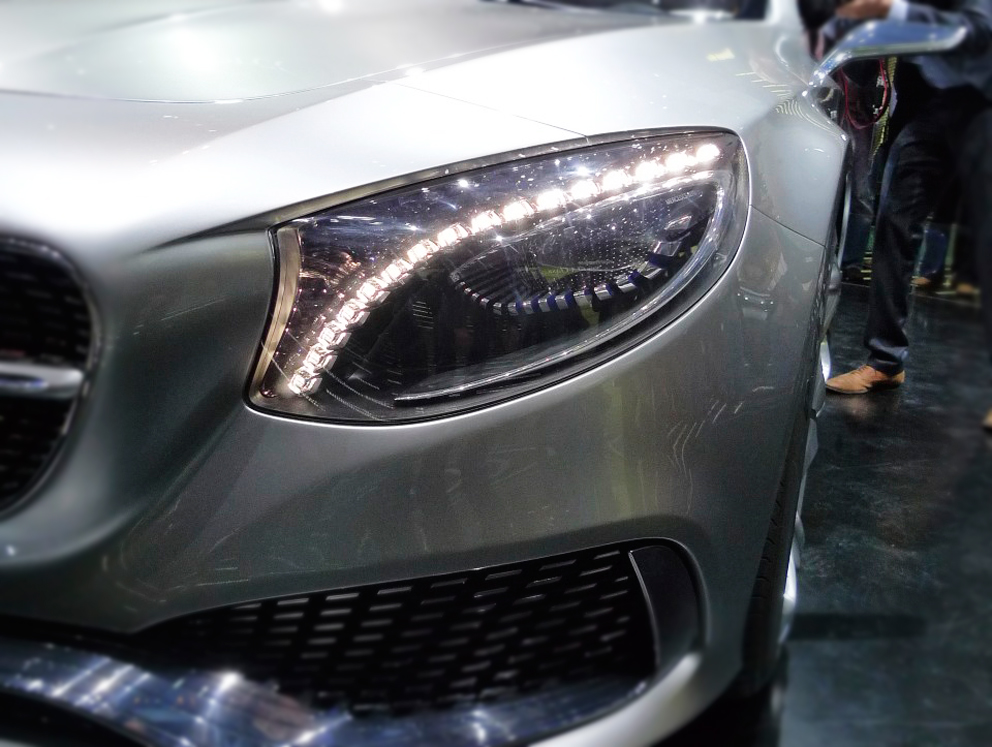 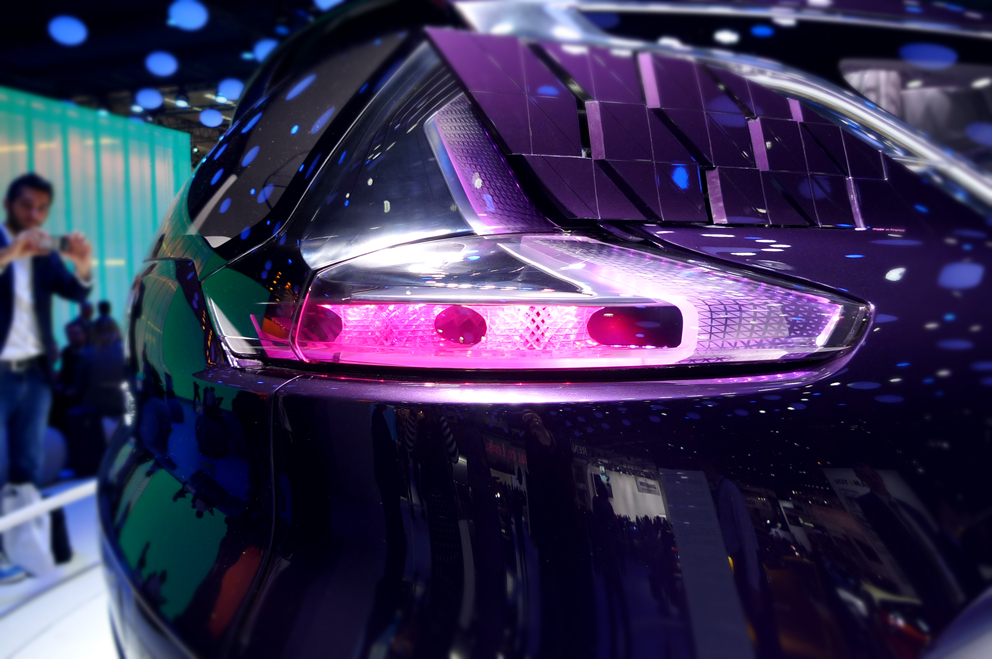 The rear lights of the "Renault Initiale Paris", decorated with a diamond pattern, shimmer in fluorescent manner in the exterior color of the vehicle. Photo © Thomas Edelmann

The headlights of the "Smart four joy" get along without cover glass, which enhances the three-dimensional impression of the u-shaped daytime running lights. Photo © Thomas Edelmann
Advertisement