edding has opened its first tattoo shop in Hamburg – and here, Zumtobel’s flexible lighting solutions are an important factor in guaranteeing precise lines.
by Anna Moldenhauer | 2/18/2021

“Gets under your skin. No worries there,” runs the slogan in Hamburg’s new tattoo shop, which has found itself a home at the Chilehaus in Hamburg. Instead of being welcomed by a rock ‘n’ roll atmosphere or an underground feel, customers are greeted by something completely different – in this central and time-honored location, a new and clean concept is being put to the test, one based on trust and transparency. The operator is a newcomer to the tattoo scene, yet already boasts a long-standing tradition – pen manufacturer edding. The dyes used in the shop are also something special: Vegan, no preservatives, no azo dyes. Developed over a period of five years and specially manufactured at edding’s own laboratories in Bautzen. The fact that this foray into the world of tattoos is well-grounded is evidenced by its international DIN EN ISO 22716 (GMP cosmetics) certification, which confirms that edding’s production process consistently adheres to the highest standards in the manufacture of cosmetic products. Moreover, one key ingredient in the dyes’ superior quality is their hygienic packaging – they are portioned into small amounts and stored in single-use packs, one of which is freshly opened for each new session. A new approach and one which is also reflected in the store’s interior design. The premises in Hamburg’s Kontorhaus district were gutted and given a facelift with an open, light feel to it, large expanses of glass and white surfaces – in tattoo shops, a sterile atmosphere is unquestionably something desirable. By contrast, the lounge area, the reception and the sales floor have a cozier feel to them. The management wants all potential tattoo candidates to feel at home in the shop, and this applies to everybody, from the newbies to the old hands, as the website points out.

And light is an important factor in promoting confidence in the fact that the customer’s desired tattoo will be created under optimum conditions. “We wanted the lighting to underscore the straightforward, no-frills concept for the interior and, at the same time, to be ideal for the requirements of our tattoo artists,” explains Sebastian Knebelkamp, Project Leader at edding TATTOO. Bright, precisely directed, yet dazzle-free light is just as important to the intricate work in the three “Tattoo Spots” screened off from the main section of the shop as it is to the studio’s welcoming atmosphere. Zumtobel’s lighting solutions ensure an uncompromising lighting quality. “Light Fields III” is the name of the luminaire created by Studio Ambrozus for Zumtobel that makes for an ideal balance of diffuse and directional light, thus allowing users to be aware of all the richness that contrasts can hold, but without multiple shadows or glare. This effect is achieved with the assistance of multilayered micropyramidal optics MPO+, which refract light in a controlled manner, direct and disperse it pleasantly, even when there are sharp angles of reflection. If so desired, the light can even be dimmed to suit individual requirements. The luminaire itself remains unobtrusively in the background throughout; its aluminum corpus is flat and frameless. And because “Light Fields III” can be mounted flexibly on the ceiling, the “Tattoo Spots” are always ideally lit.

Flexibility is also the order of the day in the entrance and lounge areas. The shop was able to put together its own combination of luminaires with LED light sources and powerful reflectors, all suspended from a power track. The cylindrical luminaires in this family of spotlights offer customized beam spreads. With their white casing they remain extremely unobtrusive in their pale surroundings. For the staff rooms and offices, the decision was taken to opt for the “Panos evolution” and “Panos infinity” LED downlights which make for illumination uniformity. These are complemented by “Cardan evolution”, the specialist in accent lighting, an architectural recessed light used to highlight particular features, while perfectly fitting the ceiling. Despite the luminaires’ great efficiency, the ceiling thus appears comparatively calm. In this perfectly lit atmosphere, conditions are ideal for achieving edding’s goal of providing ideal conditions for creative tattoo art, thus appealing to a wide range of potential tattoo candidates. 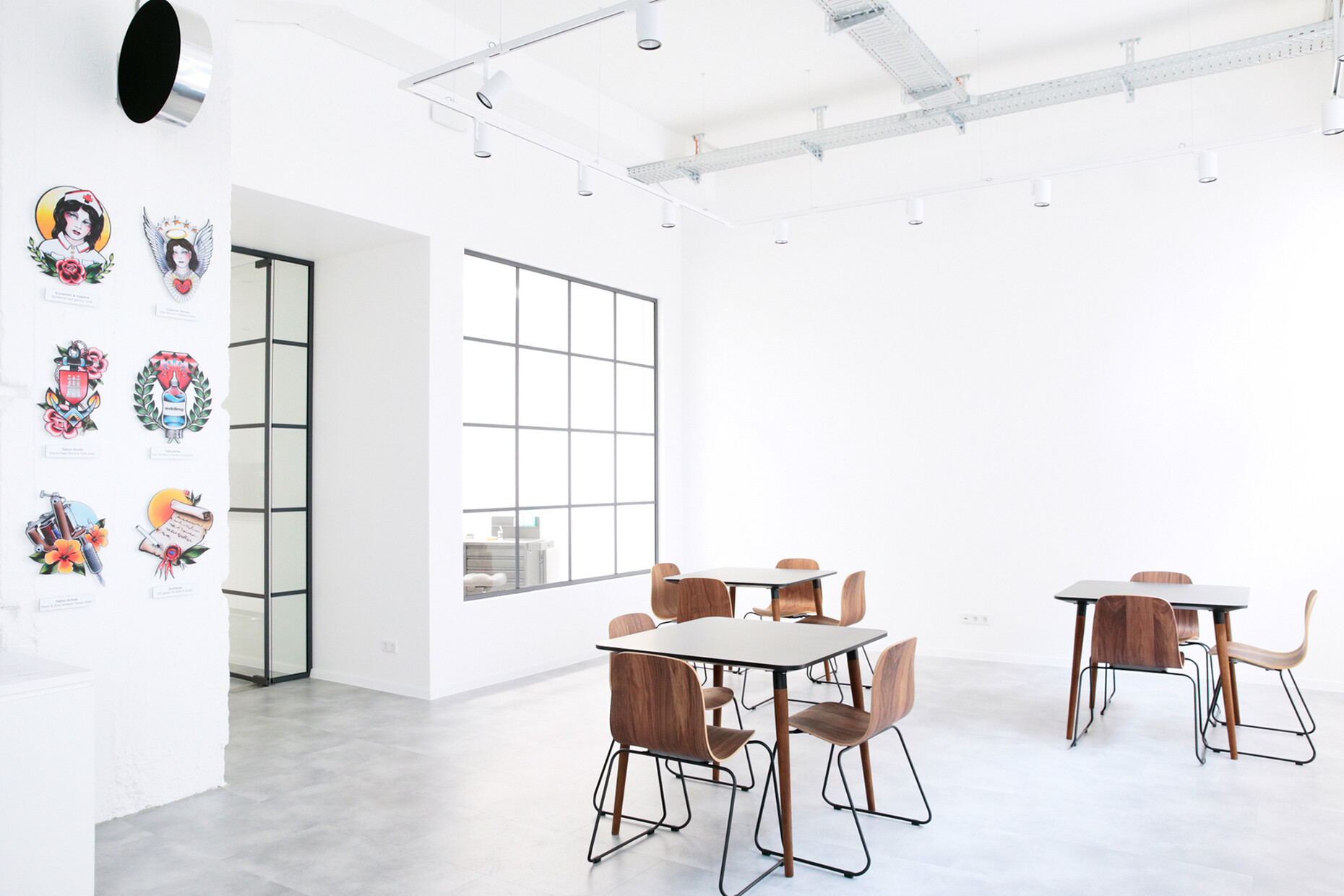 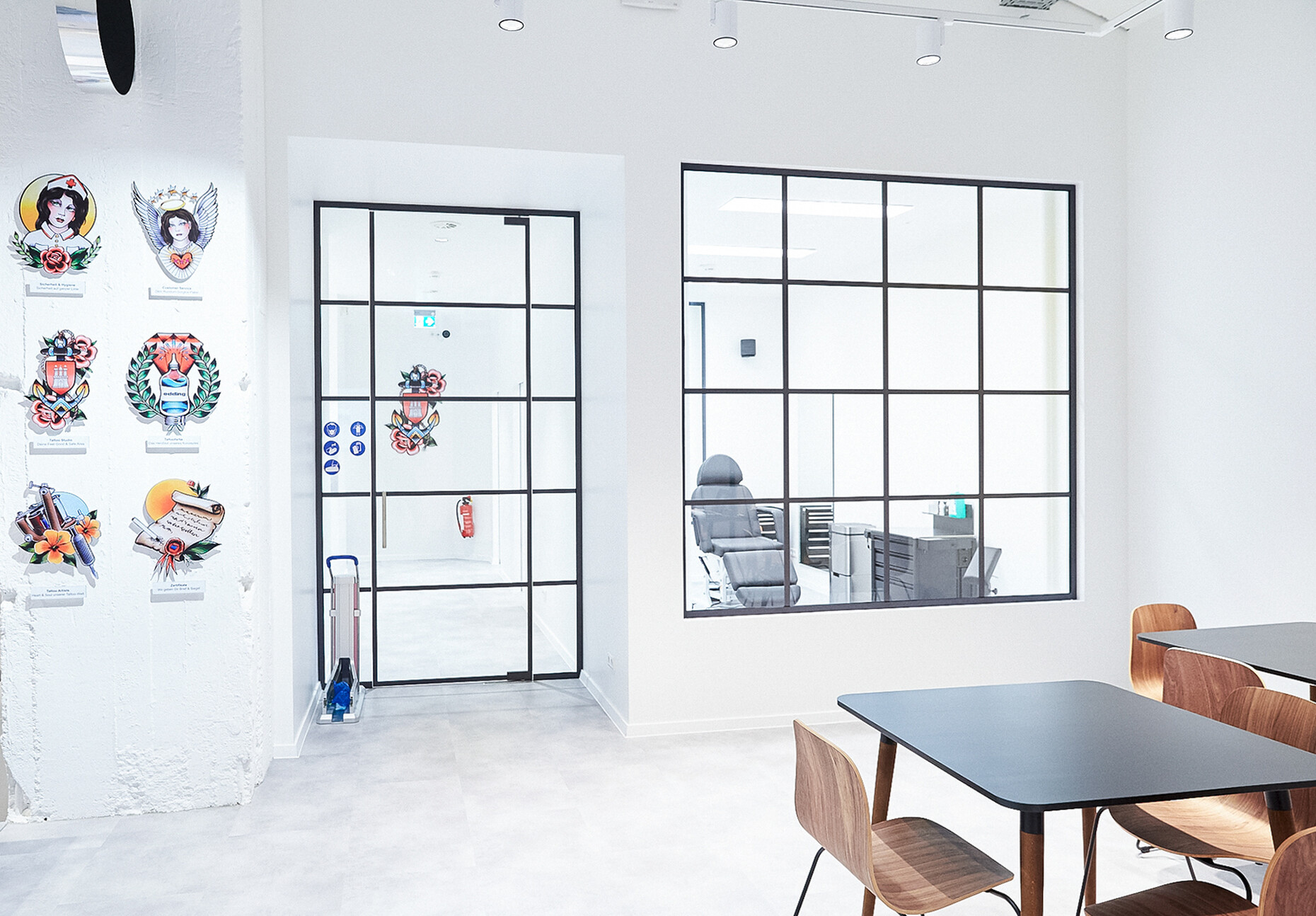 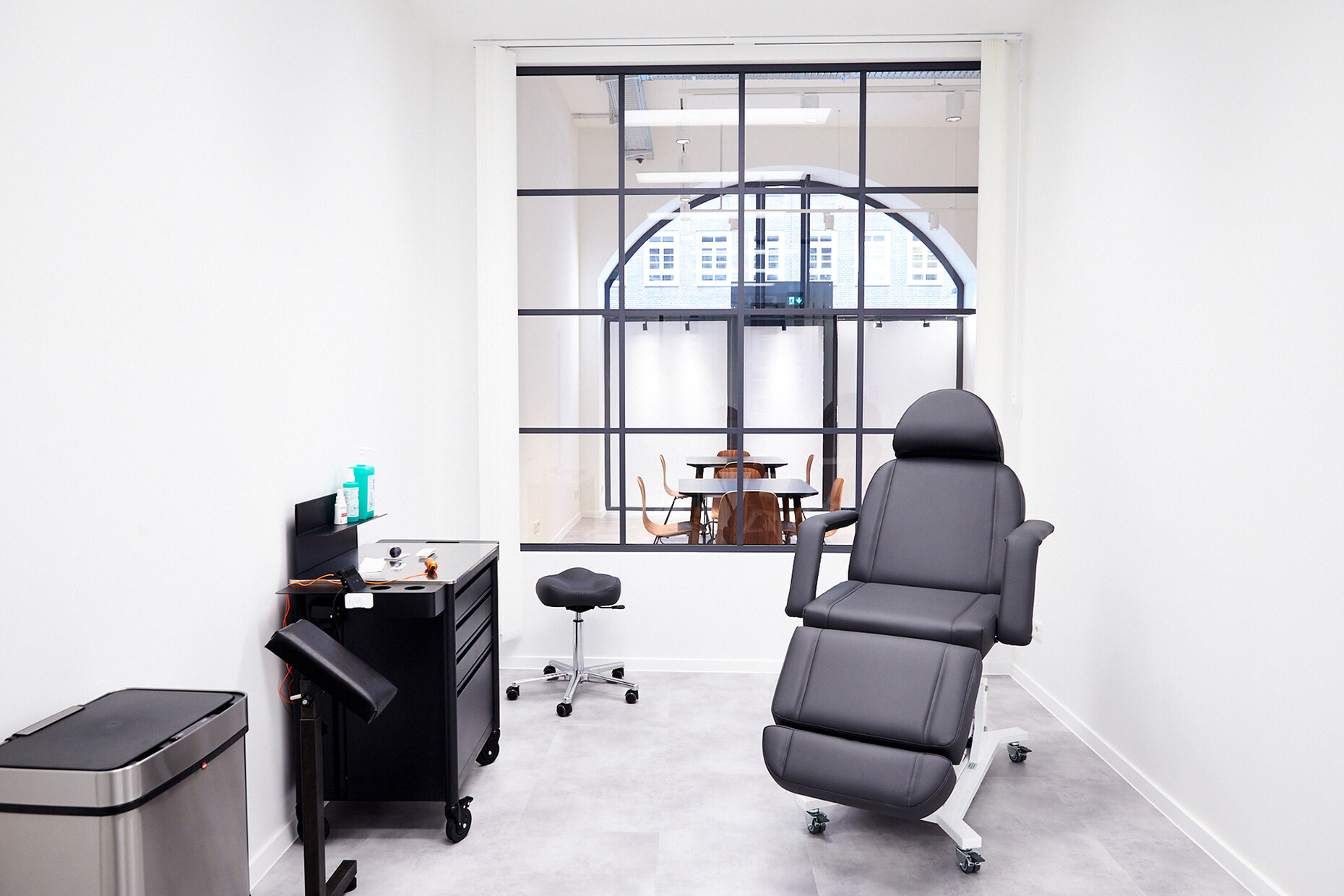 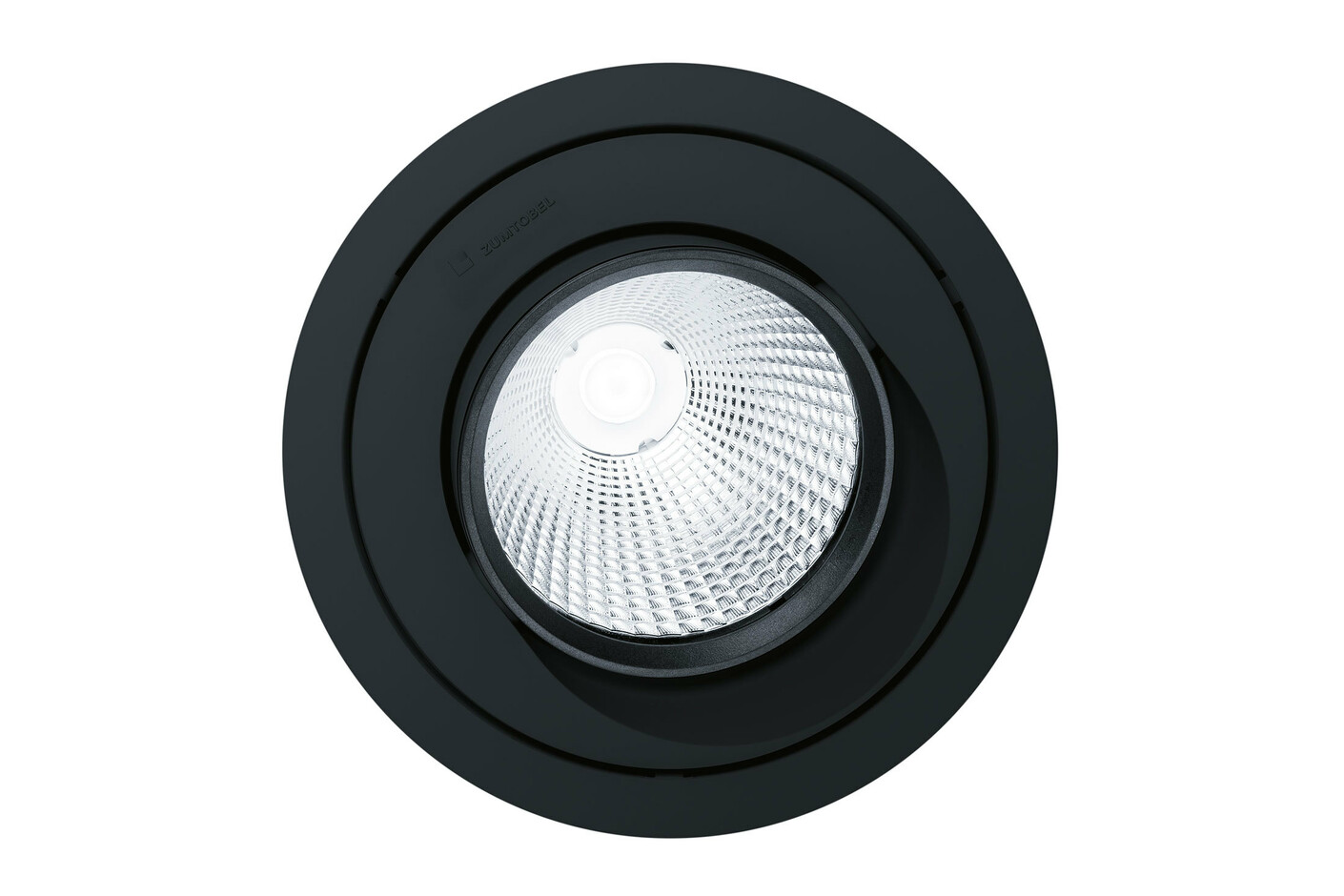 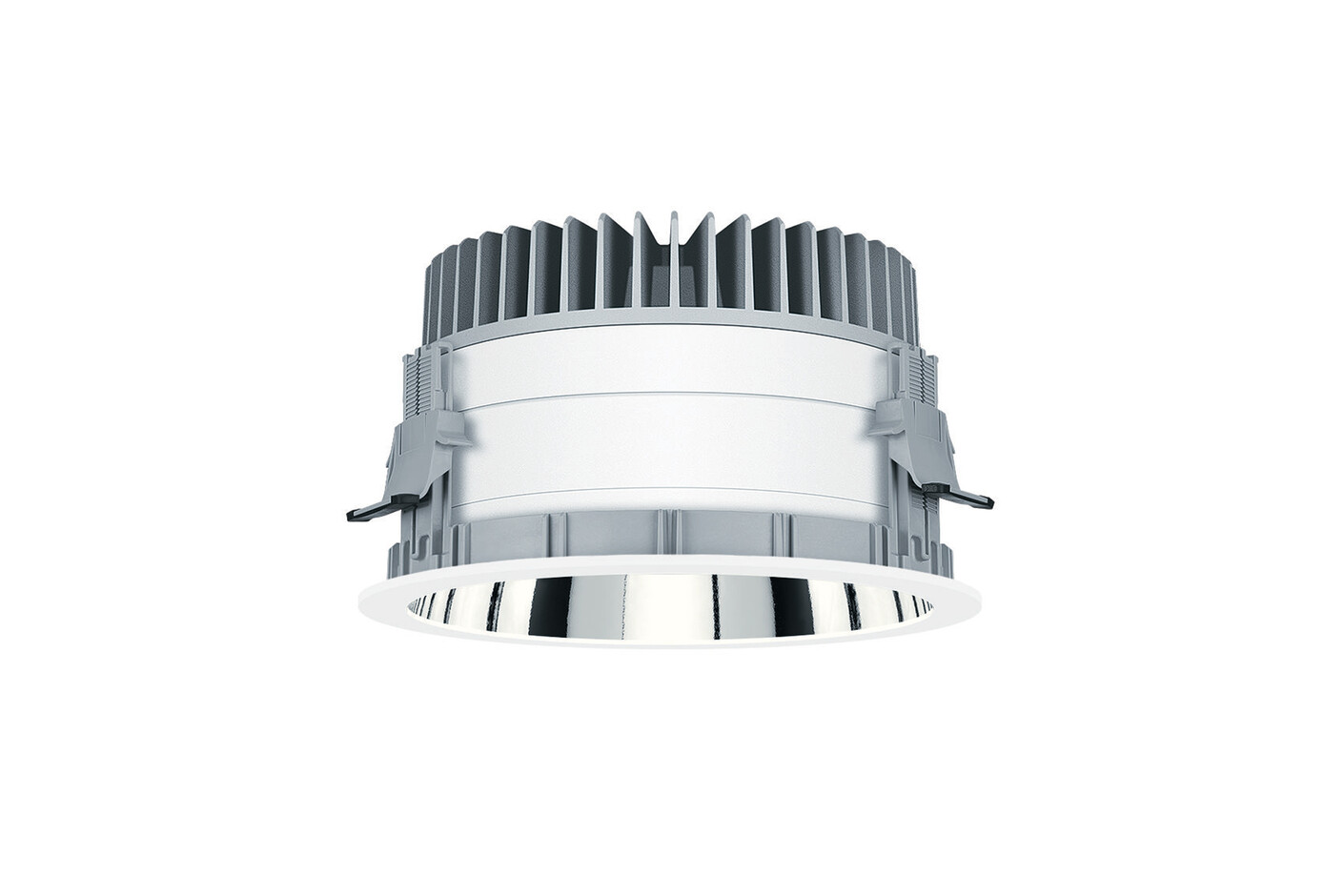 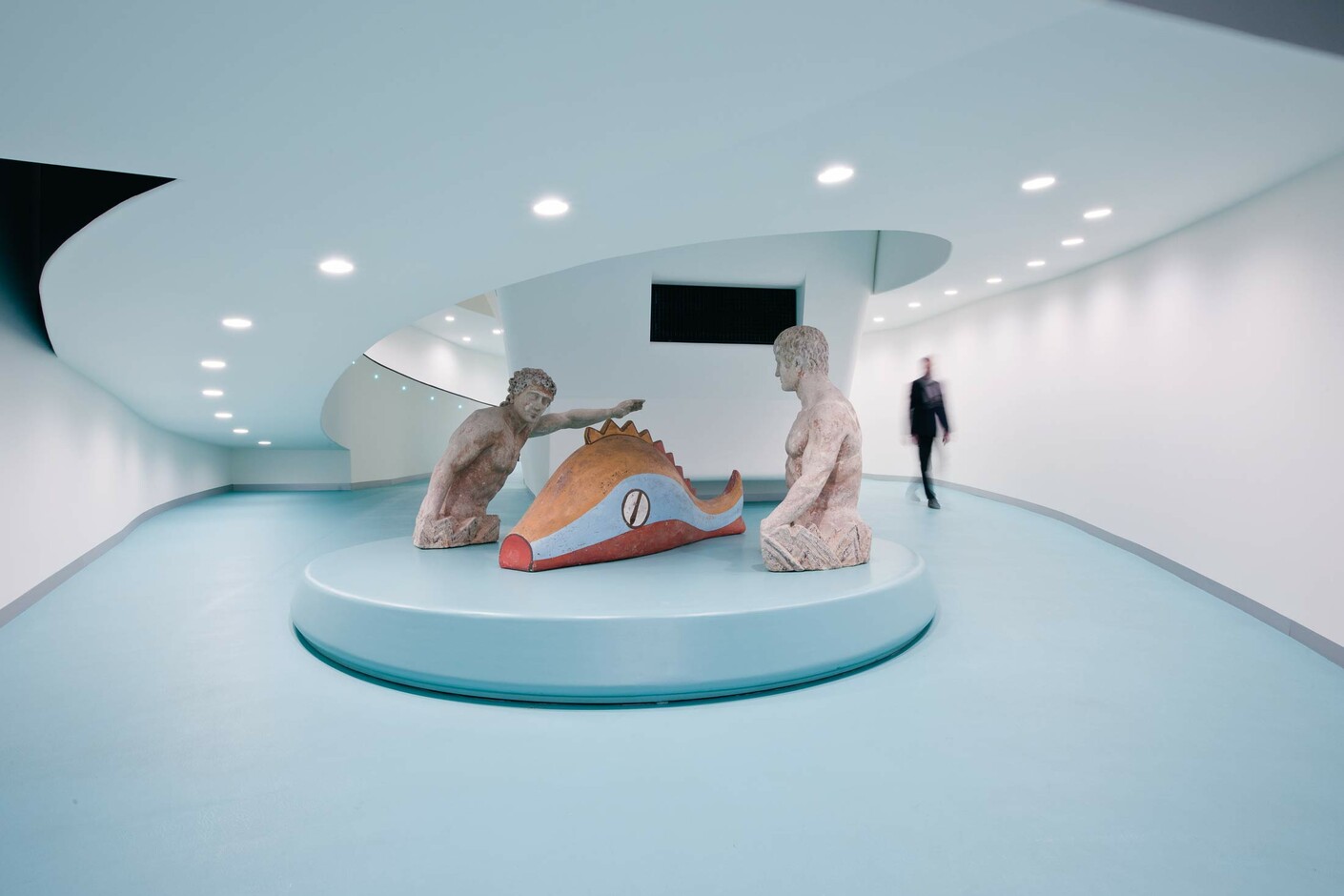 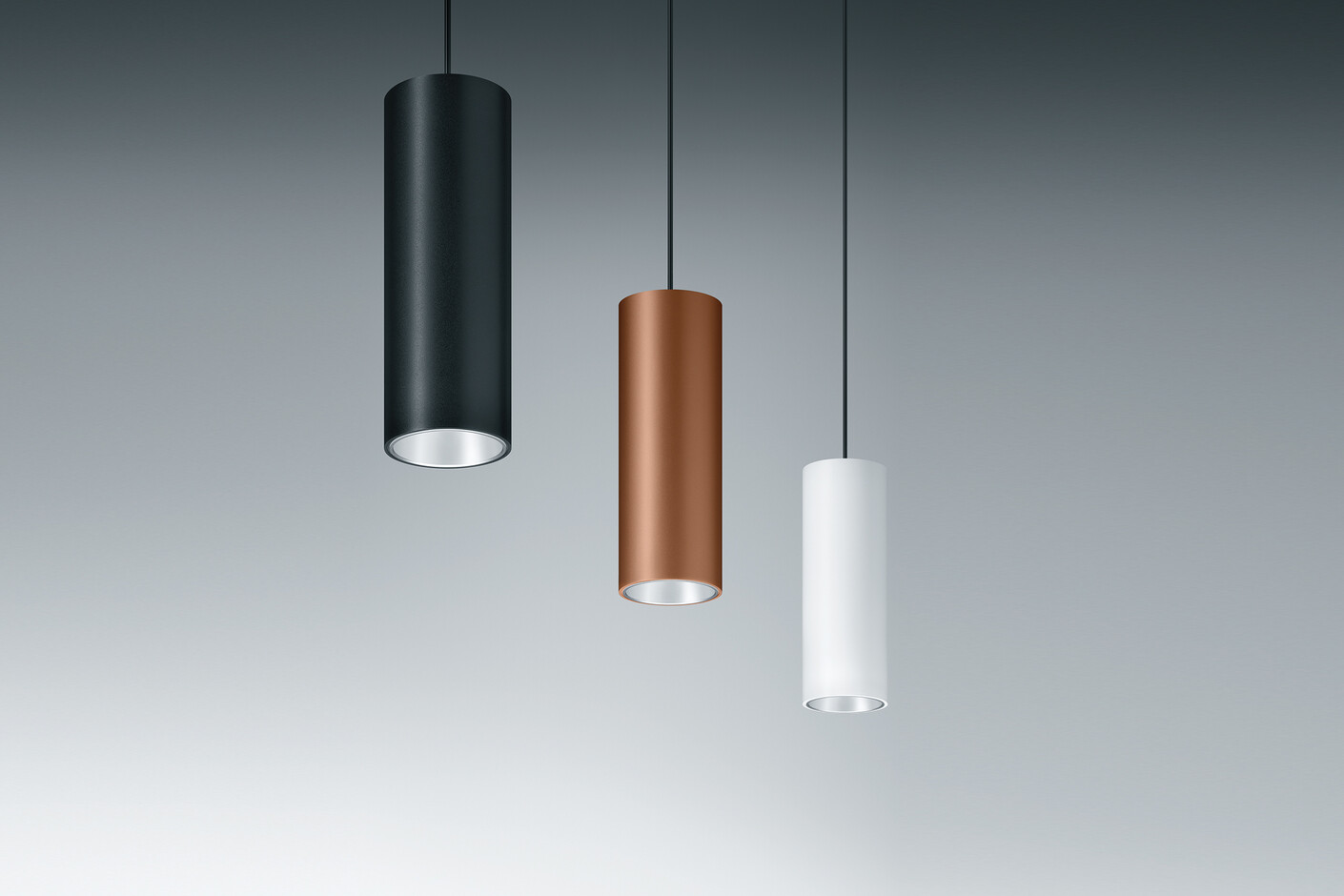 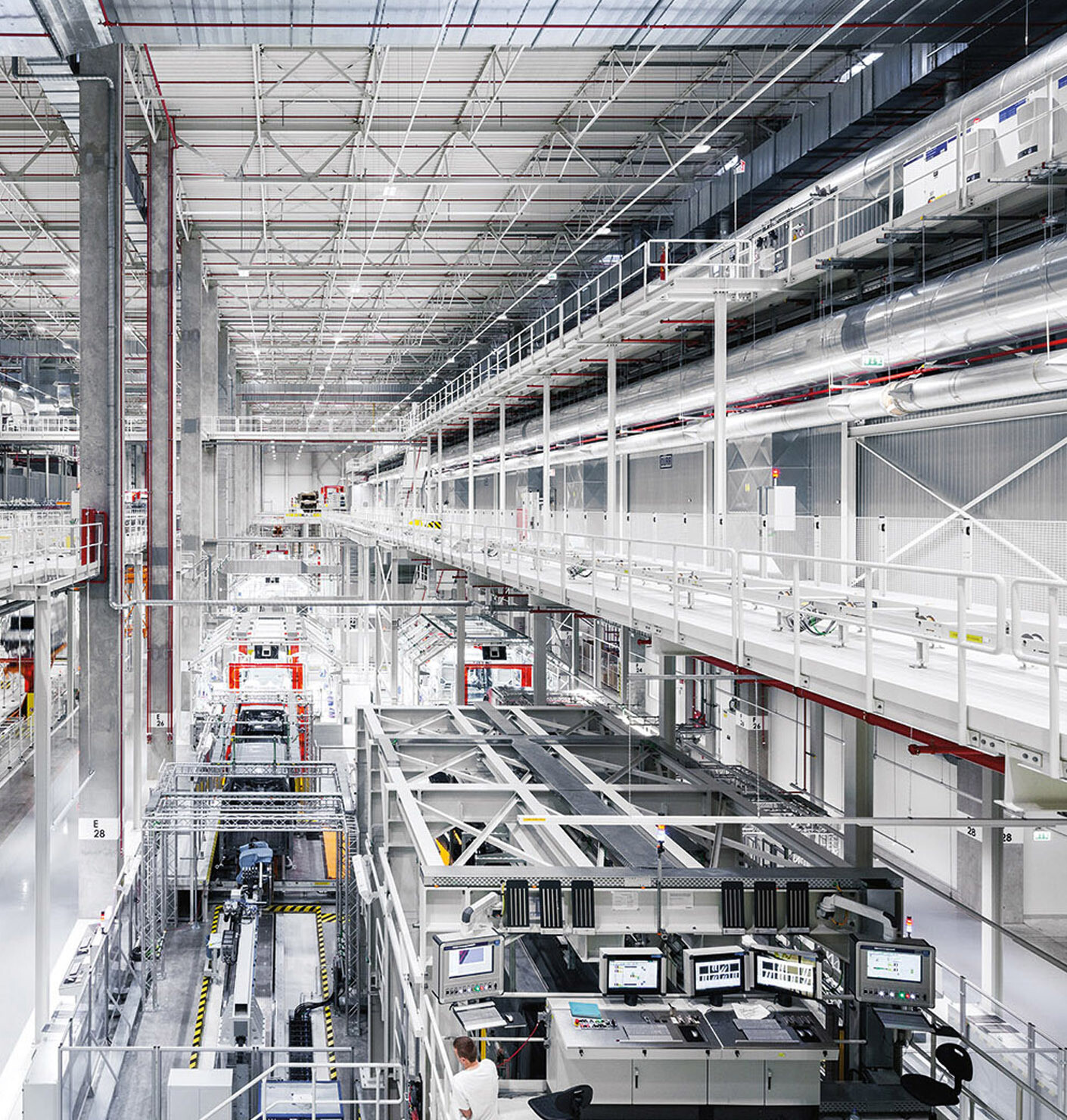 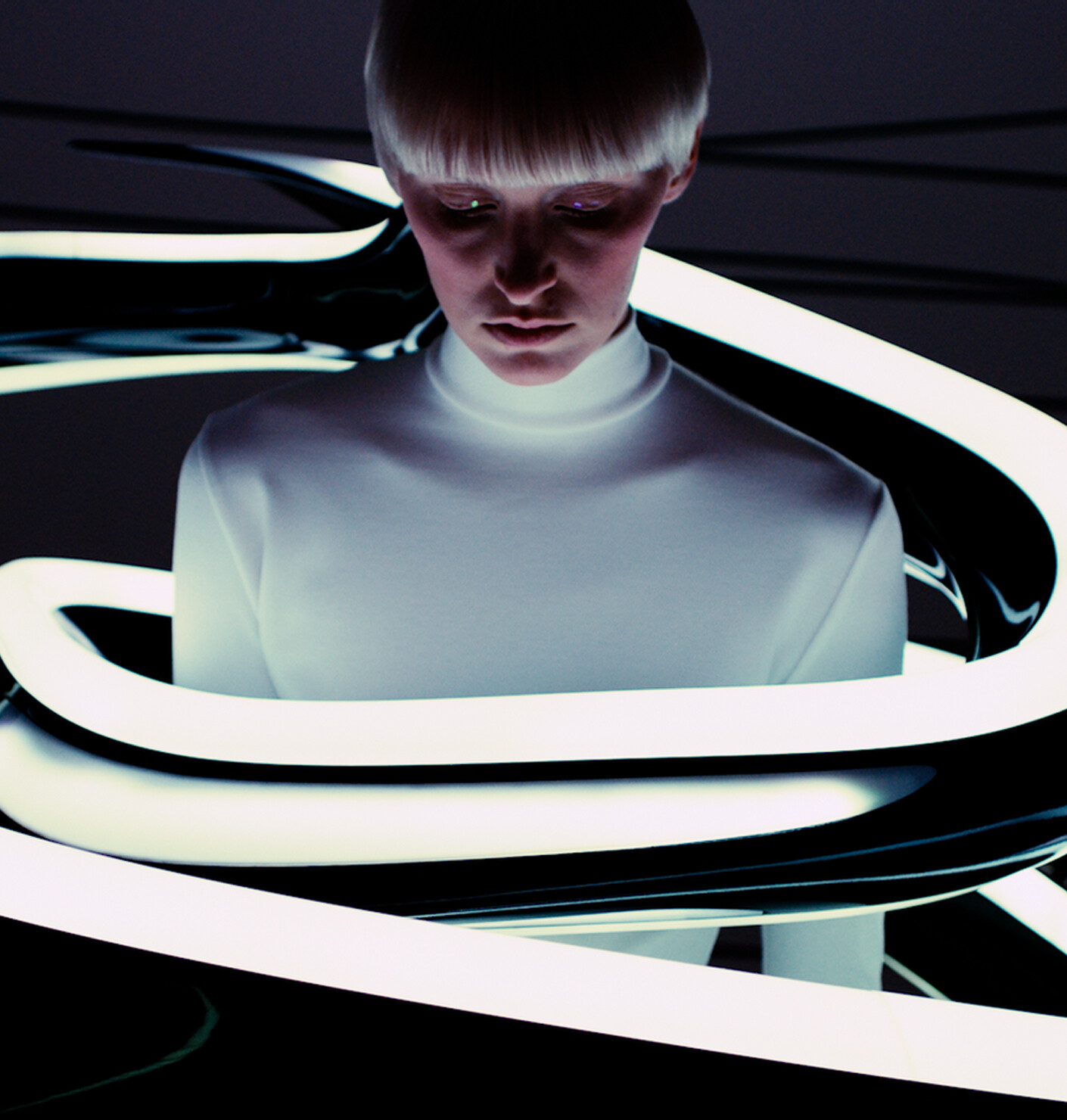 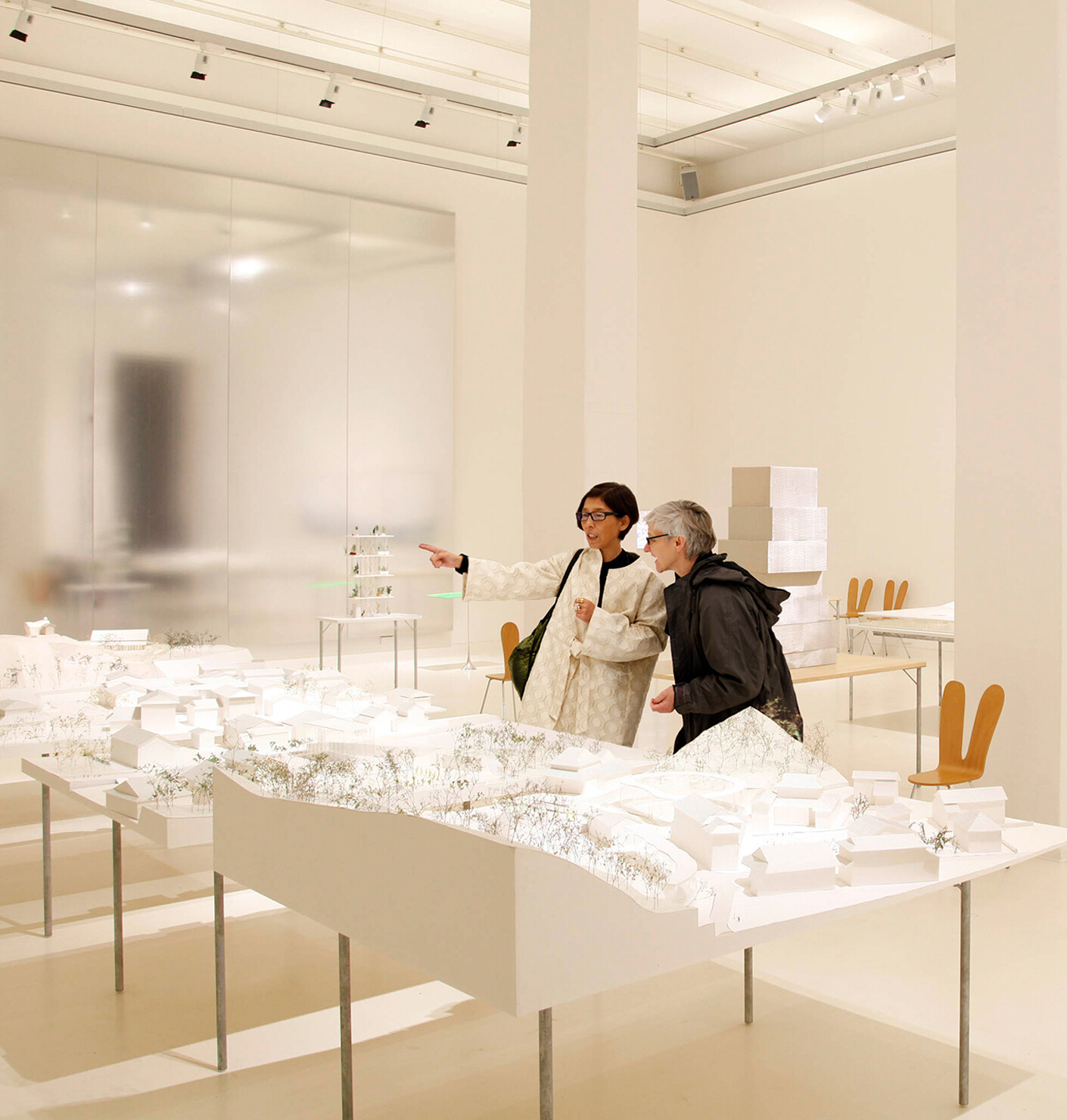 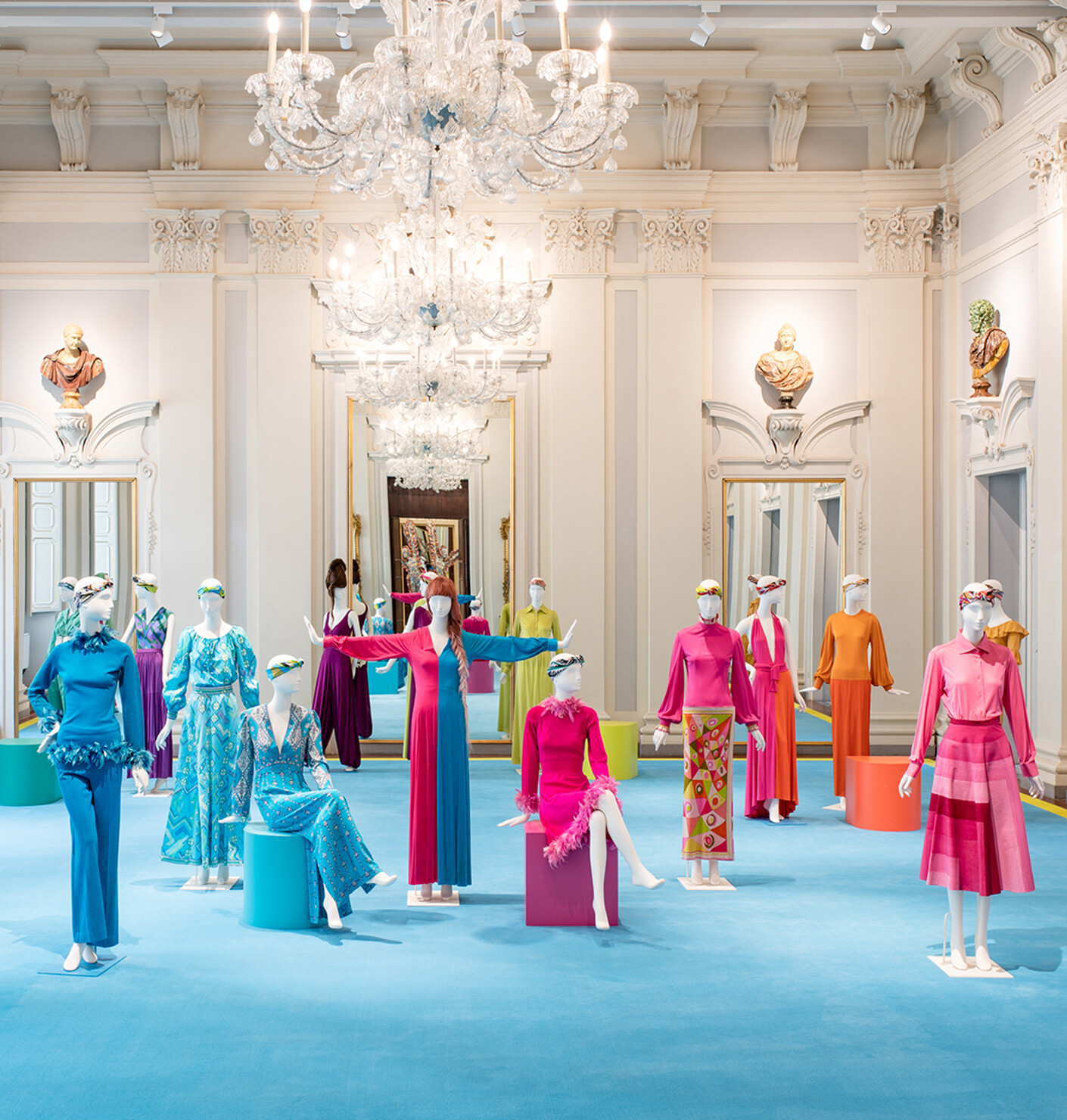