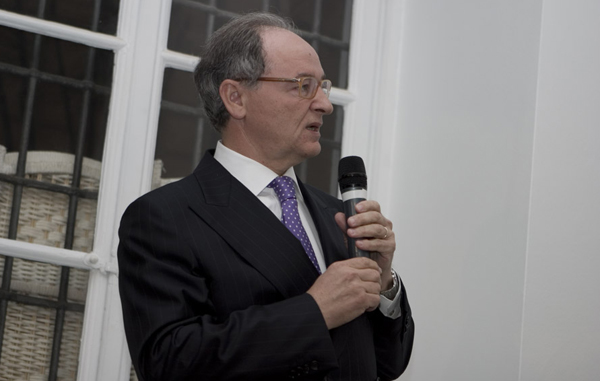 Alfredo Stella founded the Estel furniture factory in 1937 in the small Italian city of Thiene. The short form "Estel" comes from the name of a piece of furniture, "Estensibile Stella", a wardrobe with sliding doors that conquered Italian apartments in the 1960s and established the company's good reputation and financial foundation. In early 1980 Estel also began producing office furniture. Today, Alfredo Stella's son Alberto is president of Estel and soon his sons Massimo and Matteo will take over its running. It is a typical Italian family-owned business. In 2005 Alberto Stella acquired the upholstery manufacturer "Frighetto" and the "Contin" workshop in Thiene, which has specialized in custom-made furniture since 1924. In April 2008, Stella further expanded his company by acquiring another five brands, including Dino Gavina's firm "Simon".

Is it courageous or just smart to expand in times of crisis?
Alberto Stella: For every entrepreneur there comes a time when he has to decide whether he wants to tread water or move forward. I do not regret the acquisition. The five new brands even help me survive. "Simon" in particular is extremely stable. Well, I could have done without the other four but they were part of the package. Of course, what mattered to me was "Simon".

The brand "Simon", however, is not only of commercial interest to you: The firm is, so to speak, one of Italy's "cultural assets". And you are now in charge of preserving it.
Stella: I am well aware of that. I intend to continue Gavina's work and keep his spirit alive. Knoll too still produces objects by Gavina today. I want to produce furniture that will last for many years and have aesthetic and technological durability.

With his "Ultramobile" collection, Galvina was the first to combine art and design. Will you extend this series?
Stella: Yes, I already have some artists in mind who could design a new object for "Ultramobile". This is completely new territory for me. However, I would certainly like to act in a proper manner and guarantee that Gavina's philosophy lives on. But of course we also have to sell things.

Have staff been made redundant in your company?
Stella: There are 700 people working for Estel. At the moment, 150 of them are on state benefits. It is difficult to predict when the situation will return to normal. In difficult times, people start attaching more importance to their own home again. Indeed, our production has recently seen a shift from office furniture back to home furniture. Last year Estel booked sales of €130 million. 40% of the good we produce are exported.

It has only been about 18 months since you acquired "Simon". What was your first step?
Stella: First, I focused on Carlo Scarpa, especially on his tables. You need tables everywhere. In the office, at home, for discussions and during meals. "Simon" is like a treasure chest. If you open it, you discover wonderful things. We have already published an illustrated book on Scarpa's tables. I am currently making some minor improvements to several tables such as "Scarpi" with Scarpa's son Tobia. "Gritti" is a little unsteady. Tobia has now found a solution for that - we will make the screw heads out of wood. We are also contemplating giving "Delfi", which is made of marble, a glass top. Of course, Tobia is very reluctant to make changes to details his father designed.

Which table sells best?
Stella: "Doge". We have sold 2,000 of them in one year. Obama and Berlusconi have a "Doge" and there is also one at the Quirinal. The Vice President of Fiat John Elkann has bought one for his office and one for his private residence.

What do you do if others copy the furniture? Presumably Kazuhide Takahama's "Tulu" by Simon is the world's most-copied chair?
Stella: I rely on high quality. It is the best weapon against cheap copies. Often, fakes even lead to an increase in the value of the original. Which is why I wouldn't start a fight. Just think of the "Aluminium Group EA 117" office chair. There is just no way of ridding yourself of it. It brought Vitra luck and at the same time there are countless copies. Only fakes of objects that are not well known are a real problem.

Why haven't you also acquired Gavina's last creation, the "Paradiso Terrestre" (Earthly Paradise) brand with its products for urban spaces?
Stella: The heiresses, Gavina's daughters, have sold "Paradiso Terrestre" along with the name "Simongavina" to another company. I have now been forced to take legal action, because I paid several million for the name "Simon" and the fact that another company is also using the name is just unacceptable.

Will you also take care of Gavina's estate and archive?
Stella: No, no, I won't. Gavina's two daughters have lots of prejudices against me. They think I am an industrialist who is only interested in making money. I never met Gavina in person but I have been told he could be rather hotheaded. Maybe this character trait prevented him from being successful economically. In the 1960s and 1970s, however, he was very successful.

Having to sell his factory to Knoll was very hard for him.
Stella: Gavina could have swallowed the bitter pill instead and kept his factory, but he and Scarpa were men of strong character. And even after 40 years, what they created is incredibly contemporary.