A life of extremes

Happy Birthday Frank Lloyd Wright! On this occasion we take a look in the illustrated biography by Ian Volner that offers a vivid idea of the life of the world-famous architect.
by Anna Moldenhauer | 6/8/2017

“This is Frank Lloyd Wright” reads the straightforward title of Ian Volner’s book. At first sight you might suspect it of being a graphic novel, as the title image is an illustration by Michael Kirkham: a no longer young Frank Lloyd Wright seen in profile, clad entirely in black, in front of one of his most famous buildings, the “Fallingwater” villa in the “Bear Run” nature reserve outside Pittsburgh. The lavishly illustrated volume on Frank Lloyd Wright is the first architecture-related title in the “This is...” series brought out by Laurence King.

Yet even if you will encounter numerous other illustrations between the book’s covers, it is by no means a graphic novel. The slender volume actually contains a surprising amount of text: It tells the story of the famous architect in terms of the key biographical events in his life, from his youth in Wisconsin to his death – in short, informative text capsules. The story of his life is rounded out by photographs of his most famous buildings, such as the “Prairie houses” in Illinois or the Guggenheim Museum in New York. Diagrams and 3D sections, for example, of the “Oak Park House”, the private home of Frank Lloyd Wright, his first wife Catherine and their six children, explain in great detail the structure of the buildings and complement the overall visual impression.

The focus of the biographical narrative is, however, more on the in part dramatic events in the private life of Frank Lloyd Wright than on his oeuvre – even if in this respect T. C. Boyle’s novel “The Women” gives a more comprehensive idea of the turbulent life of the US architect. So anyone expecting an architectural guide to the approx. 400 houses in Wright’s decidedly productive phase, will be disappointed. The short explanatory notes on the milestones in his architectural career each offer a brief introduction to the idea ad structure of the respective building, but do not go into any depth.

Frank Lloyd Wright defining time as assistant to Louis Sullivan, whom he termed my “Dear Master” and truly revered, as well as his influence on European architecture after 1910 get short thrift. If one overlooks such oversights, then “This is Frank Lloyd Wright” is a lovingly illustrated summary of the life of this pioneer of Modernist architecture, with all its ruptures and new beginnings. 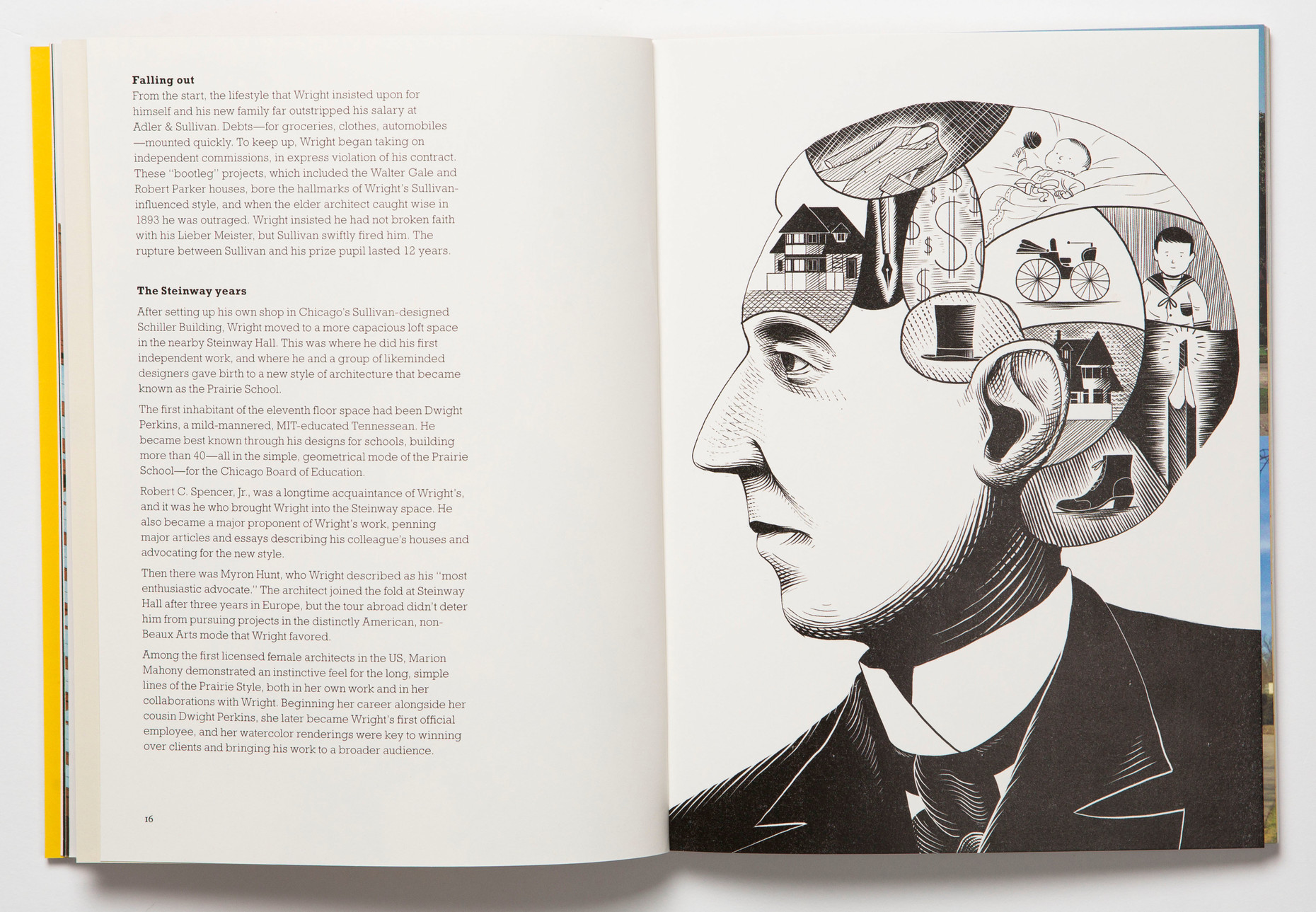 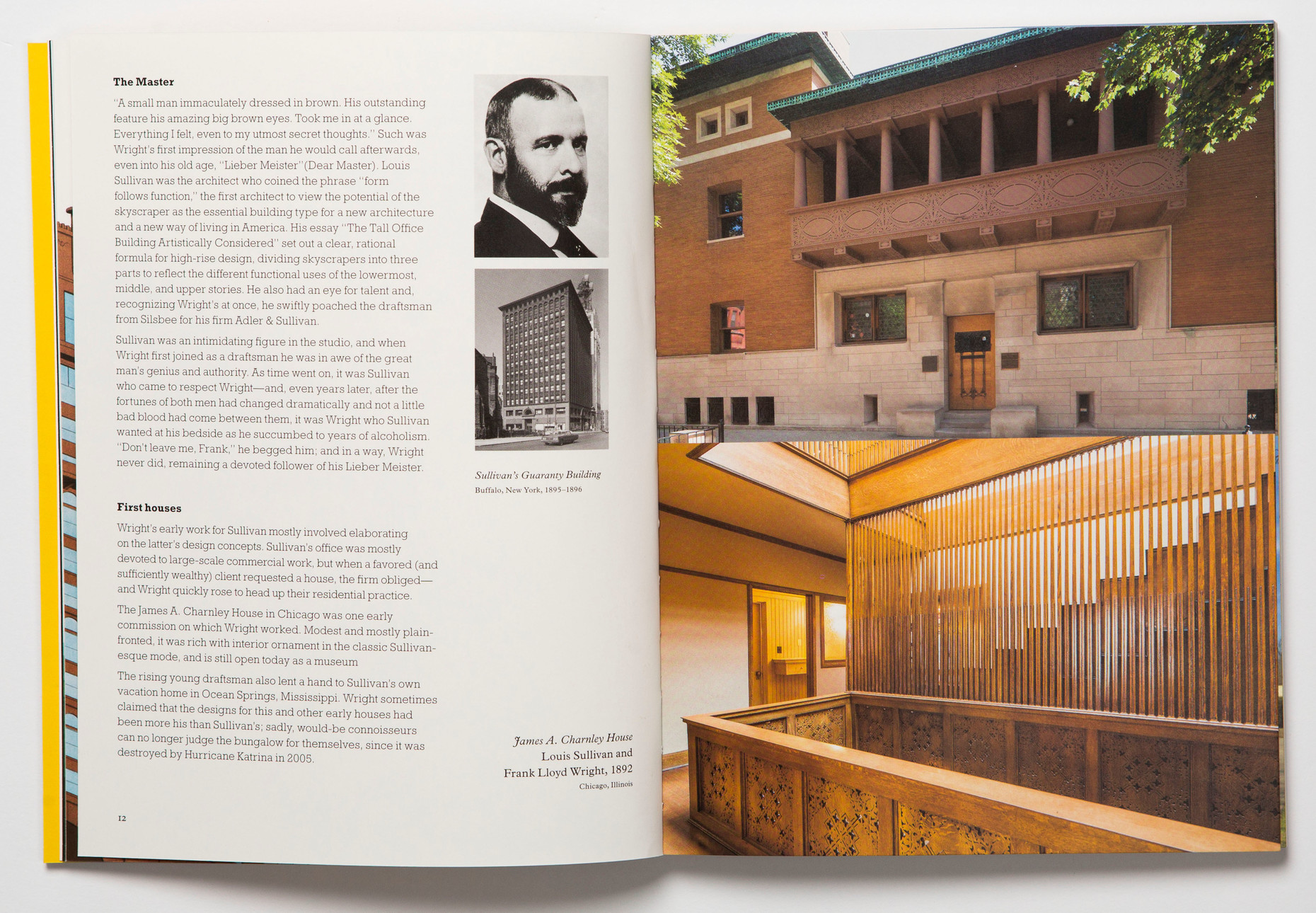 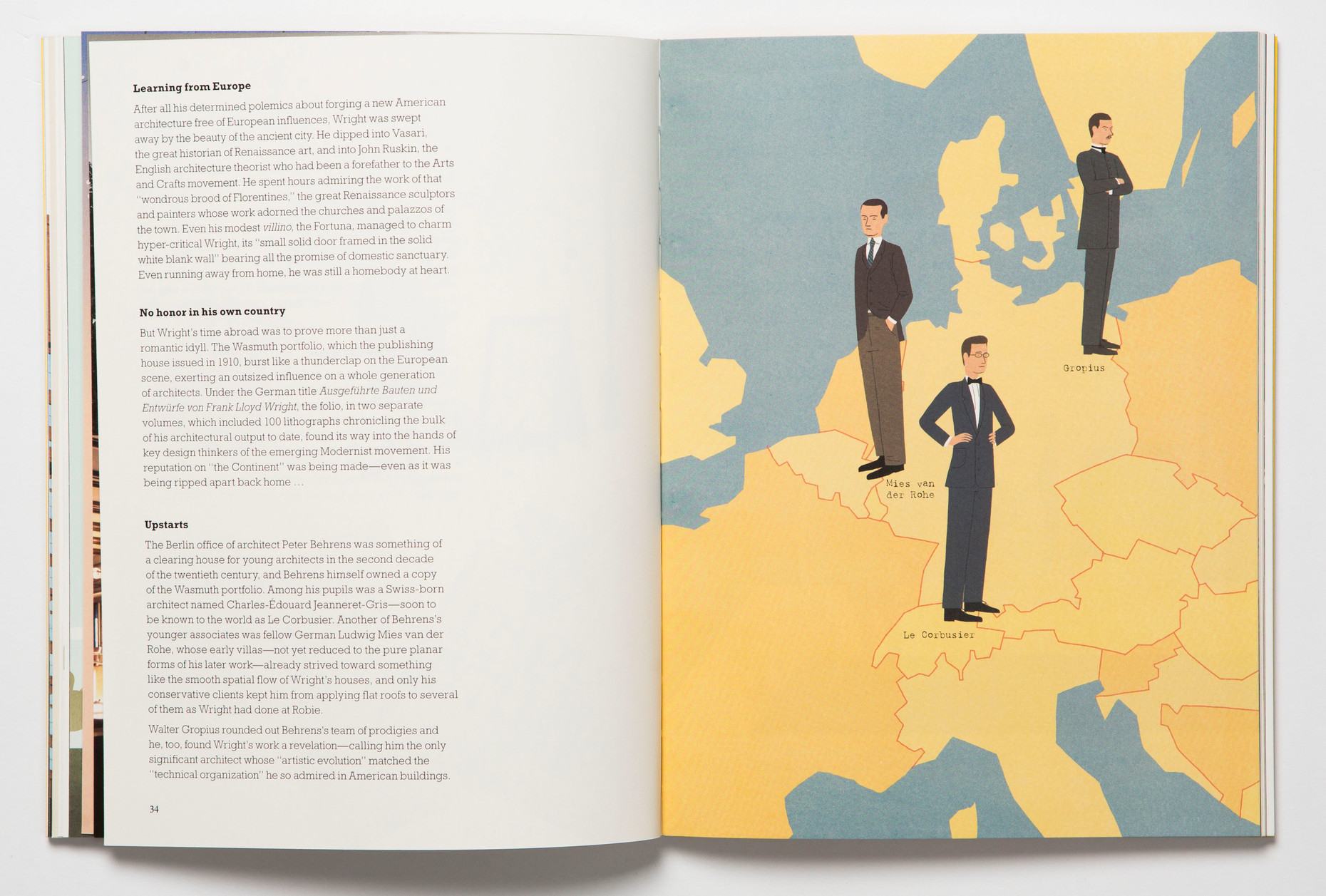 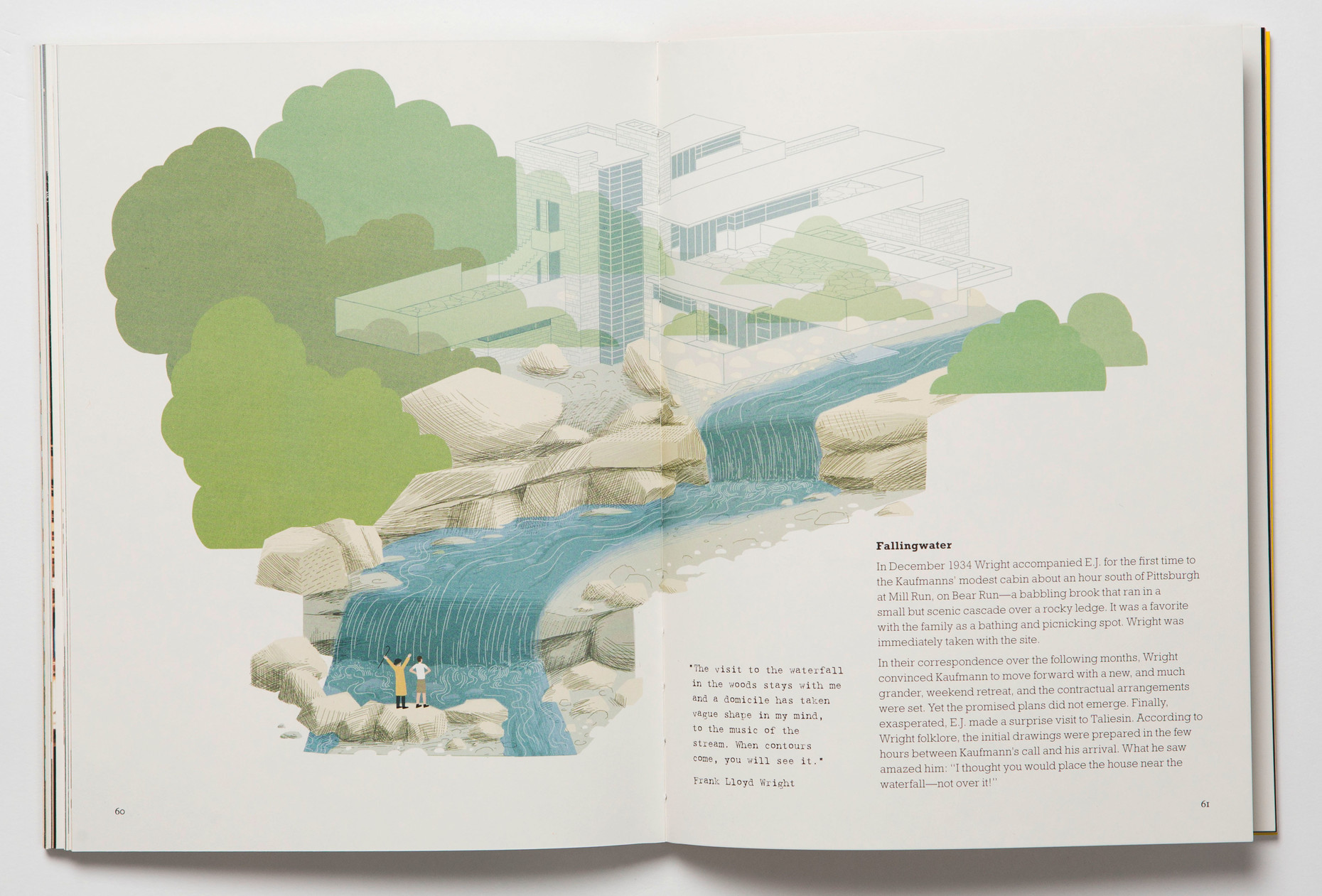 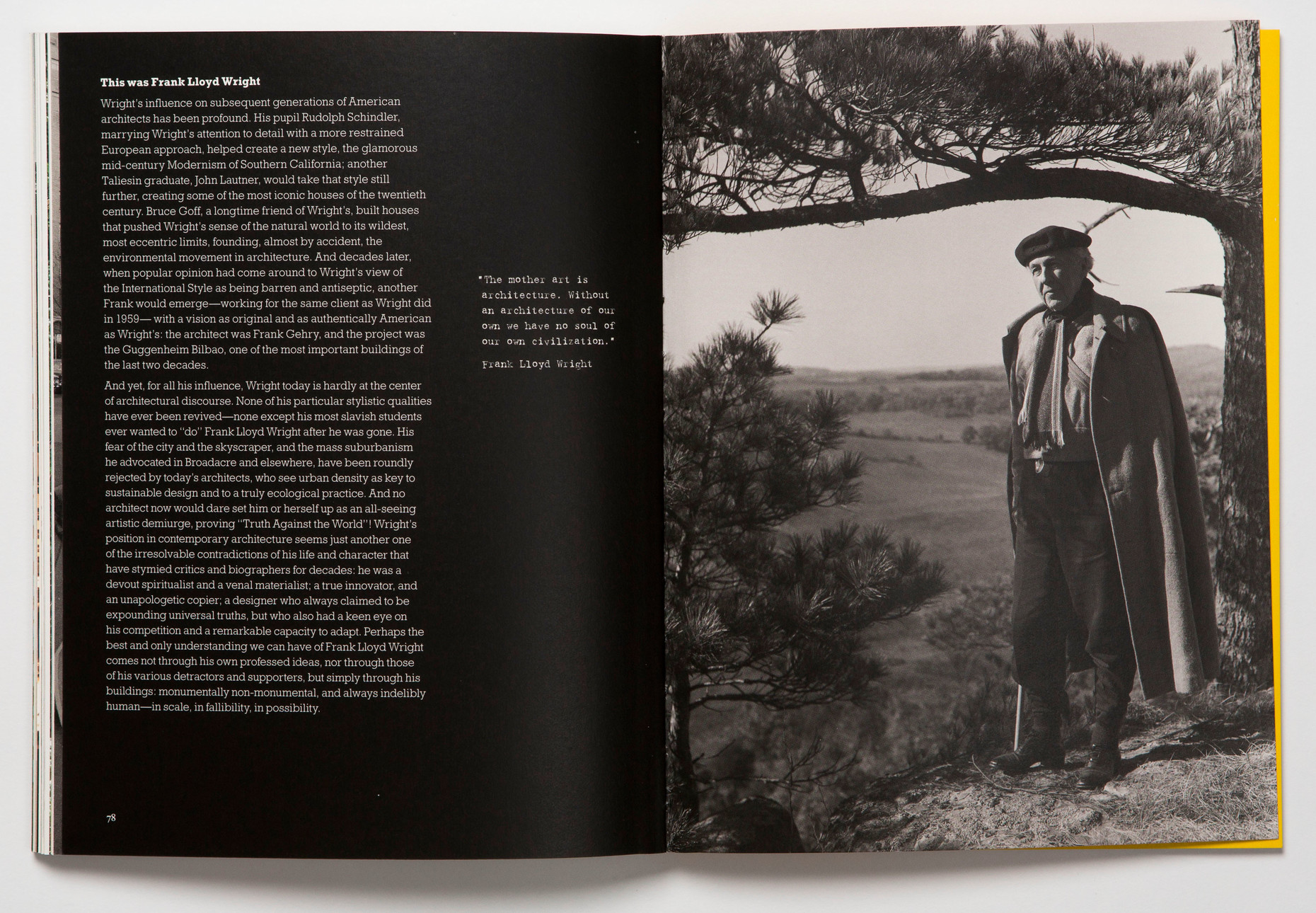