top
From experimentation to crowd-funding
von Sandra Hofmeister | May 2, 2012

What would happen if furniture were open source, available to everyone? Or if it could be produced and developed in any location in the world? If designers didn't design finished products but open, evolvable systems originating in a virtual, ever-changing collective? "The Future in the Making", an exhibition organized by architecture journal Domus in the Palazzo Clerici and one of the many exhibitions to be seen all over central Milan during the week-long Salone del Mobile, took precisely questions such as these as its starting point. The show presented strategies for use in future production processes within design and exhibits a series of models that already make use of such approaches today. However, there is one question that has been omitted from this otherwise very accomplished showcase, namely: which particular qualities will the products resulting from such design processes then possess? Instead the show has been conceived as more of an overview of the various phenomena. It brings together developments and trends that still find themselves in the very earl stages and will continue to grow in their relevance in the future.

Open networks and a new typology

According to Joseph Grima, curator and editor-in-chef at Domus, the flow of information within open networks is creating a new typology. However, this is not characterized by its form or its function but by the network in which the initial idea begins to take seed. International initiatives such as the The Future in the Making Fab Lab open workshops, which designers can use to produce their prototypes, or crowd-funding networks like kickstarter.com, which serves as a source to find financing for innovative ideas, have provided access to the necessary means and opened doors so that those design projects that do not take place within the R&D departments of the big corporations are able to drive themselves forward. The "Open Design Archipelago", as presented within the exhibitions, is a collective of individual initiatives such as Thomas Lomée's Open Structures network, in which design becomes an open puzzle made up of various participants and resources; the radical musings of Droog, which question the laws of the market; and technology installations such as the prototypes "R18 Ultra Chair", using which Clemens Weisshaar and Reed Kram collaborated with Audi to gather expertise on lightweight construction in the automotive industry. Many of the exhibits will embolden young designers in particular to drive their projects forward. However, they make no statements on the quality of the resulting products; such aspects are up for consideration on a case by case basis. The Bluetooth speaker "HiddenRadio" by Vitor Santa Maria and John Van den Nieuwenhuizen, for example, has been featured on several blogs. Starting out, the designers set themselves the goal of using Kickstarter to raise 125,000 dollars in order to cover the development costs: By the end of the campaign they had raised almost a million dollars from over 5,000 sponsors. But even today, HiddenRadio is still not a finished product. And we will only find out whether their idea really will become the "simplest and most intuitive product ever" (as the crowd-funding website claims) when the two designers are actually able to present a functioning, workable model, and then have to find people to use it too...

Trial and error – or the meaning of experimentation

Two smaller exhibitions by ECAL held in Spazio Orso also addressed the "Making of" theme, though from a very different perspective. They provided a wonderful insight into the work carried out in the University's vibrant experimentation workshop as well as presenting Bachelor and Master theses by students from a variety of classes. "Our aim was to find interesting effects for the craft tradition of mouth-blown objects by Matteo Gonet in Basel," says Ronan Bouroullec, who led a glass workshop with 20 students who were doing their Masters in Product Design; in doing so he really spurred them on in their eagerness to experiment. Wood, steel and stone were used as the basic materials to create molds and templates, which were then used to create unusual structures and shapes from the molten glass, leaving the fragile material marked by interesting and unusual impressions; and in many cases the finished product told the story of its own creation. While the products of the workshop sessions are the outcome of one exercise, the diversity of work to be seen in the other exhibition spaces opens up a broad panopticon of graphic design, typography, product design, and media and interactive design, all of which has been compiled under the nonchalant name "Too Cool For School". Mathieu Rohrer's piece "Venise" made in the Product Design class run by Jörg Bohner displays a series of masks made up of multiple layers of paper. Depending on the way individual sections are folded, they create countenances that seem to constantly change and transform in marvelous and miraculous ways. Lucien Gumy's paper tower is the end result of a surprisingly stringent process whereby the individual perforated strands come apart when a weight is place at the top of the paper column, opening out and in some cases shedding like the petals of a flower. "Of course it's frustrating that I have to destroy my work in order to appreciate it," comments Lucien Gumy. "but creating a project like this really was a lot of fun."

Cyrille Verdon's aim was to explore the properties of a particular material, focus on its strengths and tease these out in order to create certain haptic qualities. Thanks to their soft rubber surface, both of her "Mollis" vases can be bent into a variety of shapes and are thus infinitely changeable.

Trial and error is a principle exhibited by most of the objects on show here – curious explorations of the characteristics and qualities of the materials used. As tedious as this approach can be, the video by Danile Catalanotto and Axel Crettenand, from the Visual Communications undergraduate course, puts it in a nutshell quite masterfully. A man stands alone in the middle of a mountain massif and frantically strikes the boulder in front of him with a pickax. The work of Sisyphus, one would like to believe, and nonetheless these experiments from ECAL remain virtuoso examples of the quality that can result from such pertinent approaches to design. It is has nothing to do with financial models but more with the object itself. Perhaps one work or another from the exhibition may find funding via Kickstarter. At least that way, the quality of the outcome would be guaranteed from the very start. 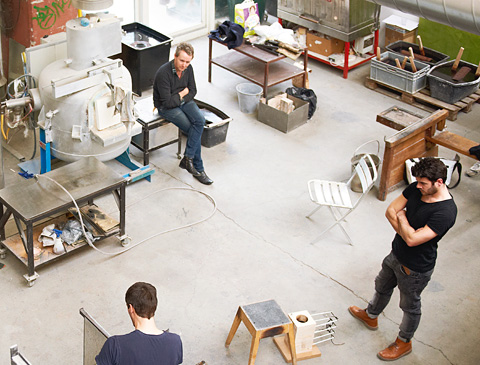 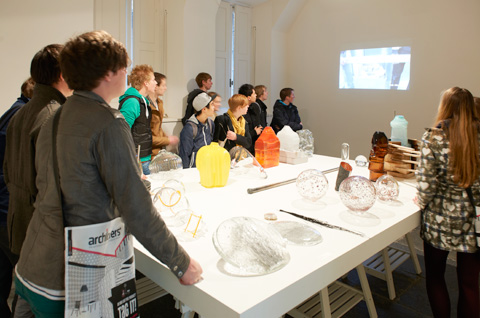 Outcomes of the “Hot Tools” glass workshop, held by Ronan Bouroullec together with glass blower Matteo Gonet and product design students from the ECAL in Milan, photo © Nicolas Genta, ECAL 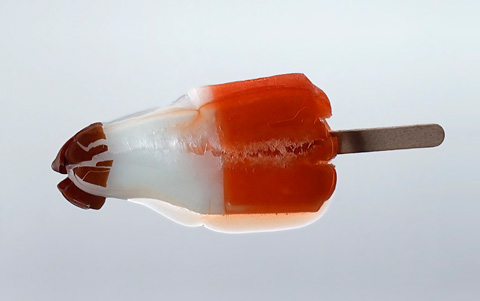 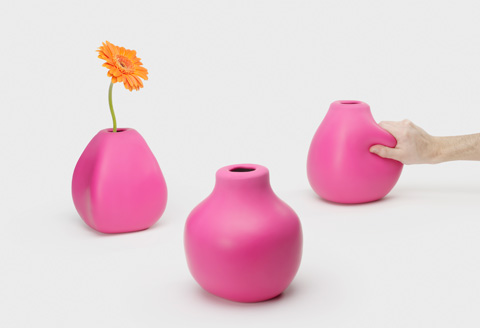 “Mollis” the changeable rubber vases by Cyrille Verdon are the product of the student’s bachelor thesis, photo © Nicolas Genta, ECAL 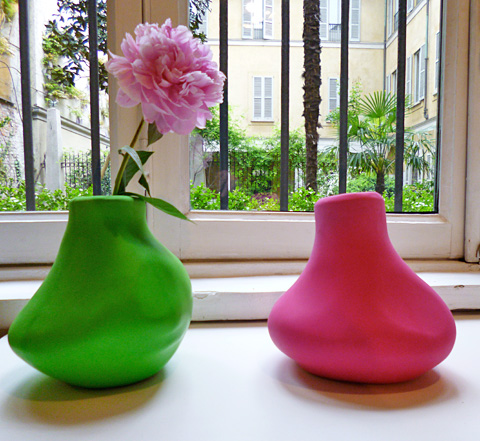 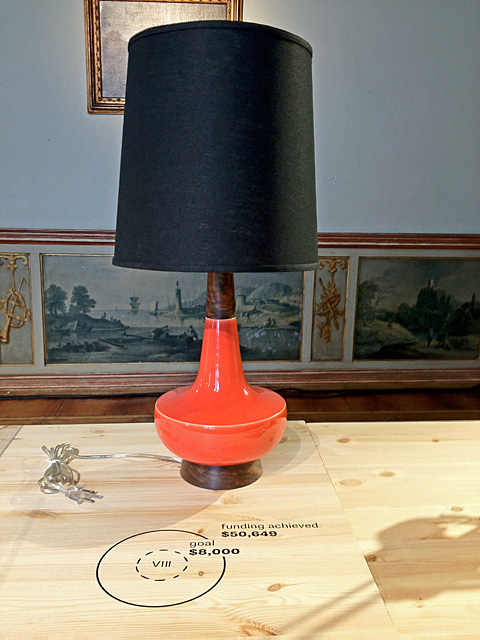 Crowd-funding via the online platform “Kickstarter”: the numbers on-screen document the difference between the amount required for the development of a particular product and the amount raised so far, photo © Sandra Hofmeister 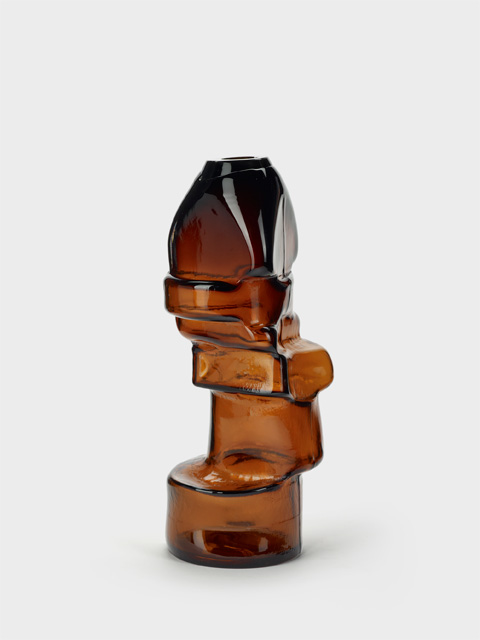 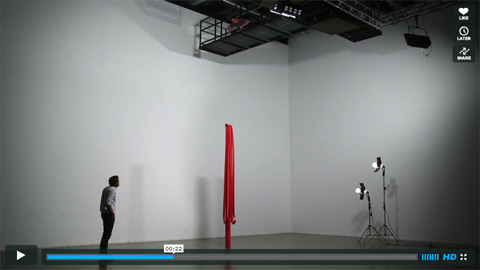 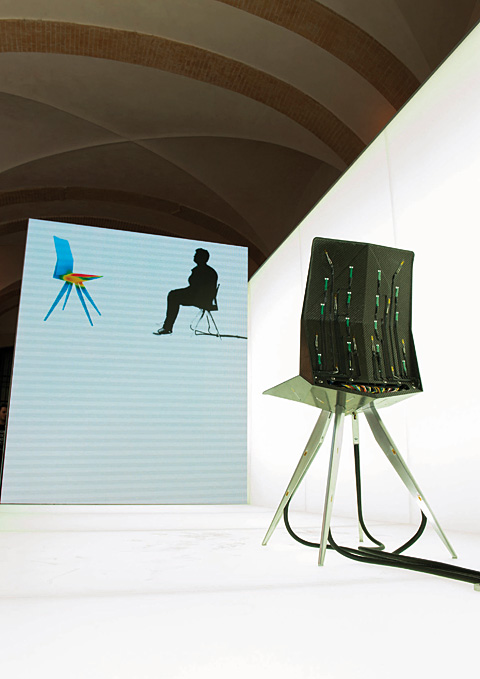 As part of the “The Future in the Making” exhibition, Clemens Weisshaar and Reed Kram gathered data to be used for the development of the “R18 Ultra Chair” for Audi, photo © Audi AG 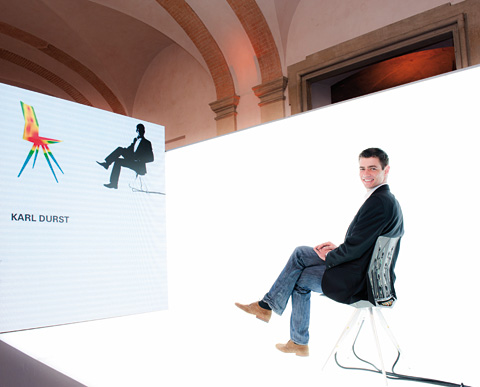 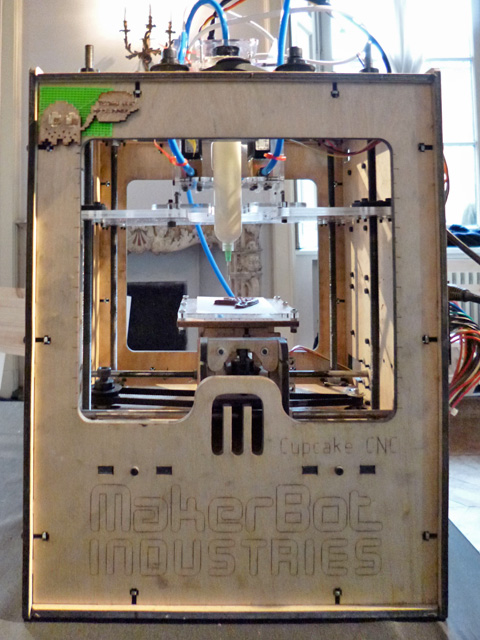 3D Food Printer by GGlab and Deniz Manisali in the “The Future in the Making” exhibition held by Domus in Milan’s Palazzo Clerici, photo © Sandra Hofmeister 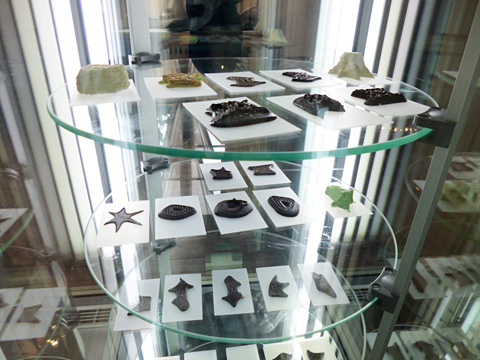 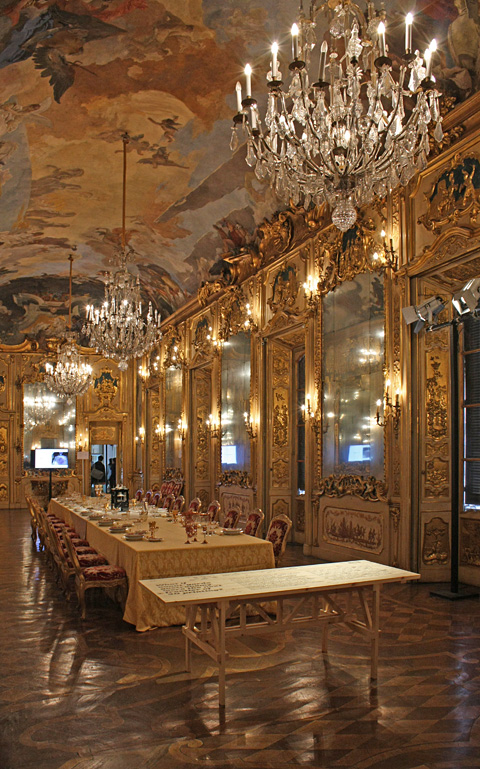 The long table has been laid, fit for a feast; while the 3D Food Printer churns out the dishes, photo © Dimitrios Tsatsas

“Venise” is the name of the masks by Mathieu Rohrer made up of multiple layers of paper, photo © Sandra Hofmeister 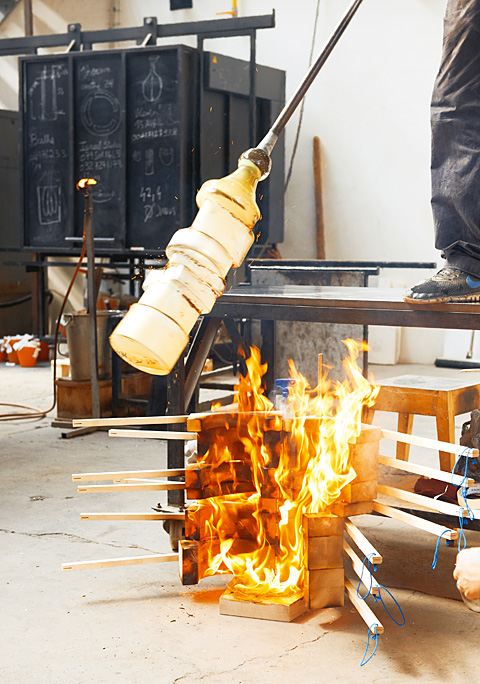 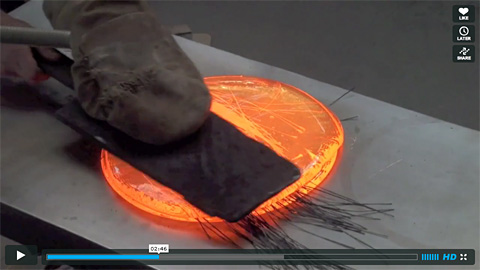 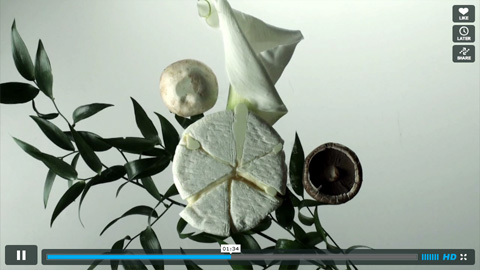