top
From Wellville to Bad Nauheim: Make damn sure you enjoy yourself
von Thomas Wagner | Mar 20, 2009

Wellness: it is one of the catchwords of an age that is as troubled by stress and illness as it is obsessed with the desire for health and wellbeing. Just say the word wellness: the timbre is as gentle as the well-oiled hands of the miracle performer engaged to reunite hysterical patients tense down to the last muscle with their body. Not surprisingly, anyone desirous of being at one with their body or restoring the imbalance between body and spirit is willing to venture the one other experiment and forgo this and that. At least for a few days a year. They might take the waters in traditional manner, try a relaxing thalassic therapy, Ayuvedic massage or Hatha yoga to calm their soul, a purifying grain diet, or maybe steam baths to dilate the nicotine-contaminated lungs - 21st century man intent on his own wellbeing can choose from an array of old and new methods from all over the world.

In the citadel of moderation It is no secret that the wellness movement, which has long since overtaken the traditional spa business, is accompanied by specific economic and tourist interests. But what is less well known is the ideology - or expressed less dramatically - the idea that is concealed behind all the relaxation exercises and demonstrative orgies of wellbeing. For this reason alone American author T.C. Boyle can be given special credit for having given an exaggerated account with all the detachment endowed by the passage of time on just how strictly organized the wish for wellness is. And that as early as 1993 in his novel The Road to Wellville. Though it might be unjustified it is his ironic gaze that truly opens our eyes to the wellness movement. Let's be honest, you can, after all, encounter Wellville almost everywhere today as you can encounter someone like "Dr. John Harvey Kellogg, inventor of cornflakes and peanut butter, not to mention coffee substitute, Bromose, Nuttolene and roughly another seventy-five foods that are easy on the digestion". Certainly you might meet someone of his ambition in almost every Bad B... or Bad E.., just as you might experience an evening like the following: "It was a typical Monday night at the Battle Creek Sanitarium, bastion of right thinking, vegetarianism and self-improvement, citadel of tem¬perance and dress reform, and, not coincidentally, the single healthiest spot on the planet. The women were uncorseted, the men slack in their suspenders, both sexes quietly percolating over the toxin-free load of dinner in an atmosphere cleansed of tobacco, alcohol, corned beef, mutton chops and the coffee jitters." We are quick to grasp what is needed above all in order to counter the corrupting influences of civilization: uncontaminated food and a good digestion. Boyle continues: "Stomachs full, minds at rest, they were gathered in the Grand Parlor to hear their Chief instruct them on matters relating to physical well-being and its happy concomitant, lon¬gevity. They might have been at Baden or Worishofen or Saratoga, but instead they were assembled here in the icebox of south-central Michigan-and paying a handsome price for the privilege-because there was no place on the map to equal it."The desire to live forever or at least for a long time - seems to be ineradicable. And it had its price. Even in cold Michigan the location of this fine example of a spa clinic.

"In the thirty-one years of his directorship, Dr. Kellogg had transformed the San, as it was affectionately known, from an Adventist boarding house specializing in Graham bread and water cures to the "Temple of Health" it had now become, a place celebrated from coast to coast- and across the great wide weltering Atlantic to London, Paris, Heidel¬berg and beyond. Twenty-eight hundred patients annually passed through its portals, and one thousand employees, including twenty full time physicians and three hundred nurses and bath attendants, saw to their needs. Six stories high, with a gleaming lobby half the size of a football field, with four hundred rooms and treatment facilities for a thousand, with elevators, central heating and cooling, indoor swimming pools and a whole range of therapeutic diversions and wholesome en¬tertainments, the San was the sine qua non of the cure business-luxury hotel, hospital and spa all rolled into one."

Without doubt, anyone who wants to get healthy and look after themselves does not so much require a log cabin in the age of industrialization and consumption but rather a health factory and everything that goes with it, above all: the right public. After all, being healthy is not in itself a fun thing. And it goes without saying that people being weak need an initiate to guide them. At least this is so for some people: "And the impresario, the overseer, the presiding genius behind it all, was John Harvey Kellogg. Preaching dietary restraint and the simple life, he eased overweight housewives and dyspeptic businessmen along the path to enlightenment and recovery. Severe cases-the cancerous, the moribund, the mentally unbalanced and the disfigured-were re¬jected. The San's patients tended to be of a certain class, and they really had no interest in sitting across the dining table from the plebeian or the pedestrian or those who had the bad grace to be truly and dangerously ill. No, they came to the San to see and be seen; to mingle with the celebrated, the rich and the preposterously rich; to think positively, eat wisely and subdue their afflictions with a good long pious round of pampering, abstention and rest." It should by now be clear enough what the human conditioned to seek wellness needs above all: uncontaminated food, good digestion, an expensive health temple on whose mud-covered altars you sacrifice your vices, a leader and a stage on which he can operate undisturbed. In short: Wellness is just one name for the health religions of our age. Many are the places where you can indulge in it. Far too many for us to show even the most important ones. For this reason we will without further ado return to the past and address a great past.

Art Nouveau in Bad Nauheim Bad Nauheim, located in the Wetterau region between the Taunus and Vogelsberg, also has a proud history as a spa resort. The Celts are said to have used the brine springs. Around 1900 Bad Nauheim was a world famous spa resort and attracted thousands of guests including numerous international VIPs. When altered hygienic and aesthetic perceptions made the building of new bathing houses indispensable, Grand Duke Ernst Ludwig zu Hessen und bei Rhein, (who in 1899 brought together key representatives of Art Nouveau on Darmstadt's Mathildenhöhe to form a free artists' colony), realized a large-scale project for 10.5 million gold marks in Bad Nauheim: Sprudelhof, a courtyard with spring, a district heating plant, electricity plant and laundry, a new Trinkkuranlage or pump room complex, an extension of the Kurhaus including a concert hall and a nursery. Wilhelm Jost was engaged as architect for the spa courtyard built from 1905 to 1911. In his design of the inhalatorium 1902 he had already forged a link between historicism and Art Nouveau. Aside from Jost members of the Darmstadt artists' colony were also involved such as Julius Scharvogel, Heinrich Jobst, Wilhelm Kleukens and Albin Müller.

Seen as a whole the fountain courtyard is reminiscent of a castle. This serves to emphasize the building's aristocratic purpose, which differs entirely from today's democratic fun pools and relaxation temples. The bathing houses are arranged around a central courtyard with three enclosed springs and linked by arcades, producing a symmetrical complex closed on three sides, and which opens up to the spa park. Jost himself described the building as "a freely interpreted Baroque in simple forms". Each of the bathing houses opens up to a decorated waiting room with adjoining decorated courtyard, whose long sides are lined by bathing cells in which there are a total of 266 tubs of Moa timber. Four Princes' baths were given a particularly exquisite design. 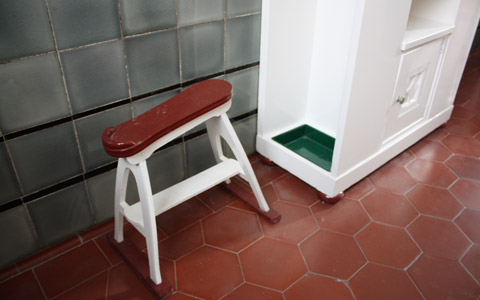 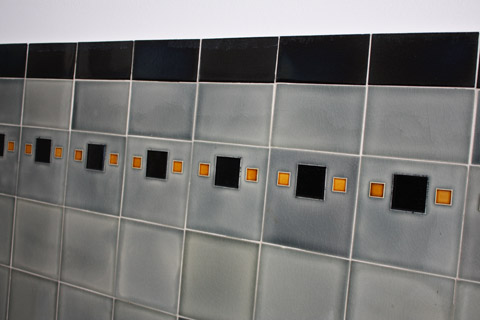 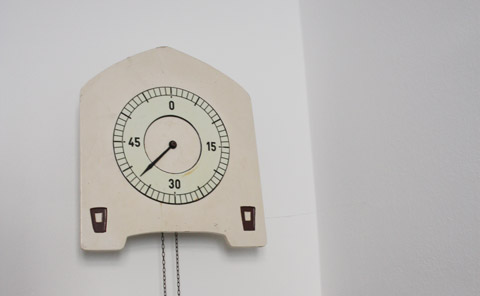 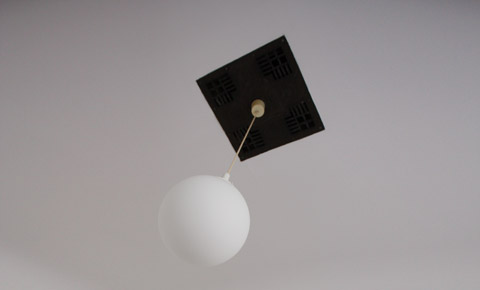 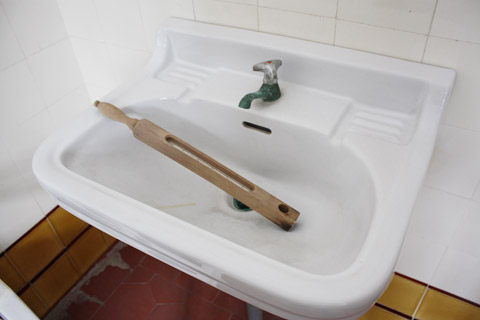 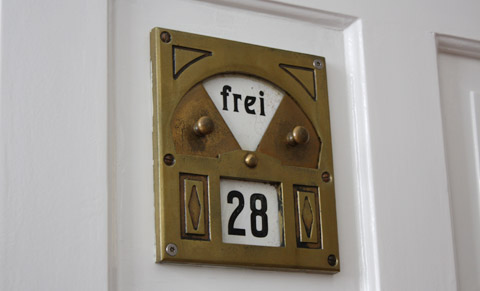 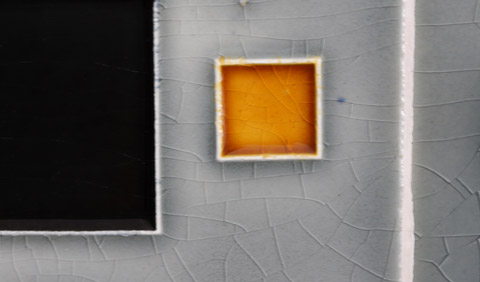 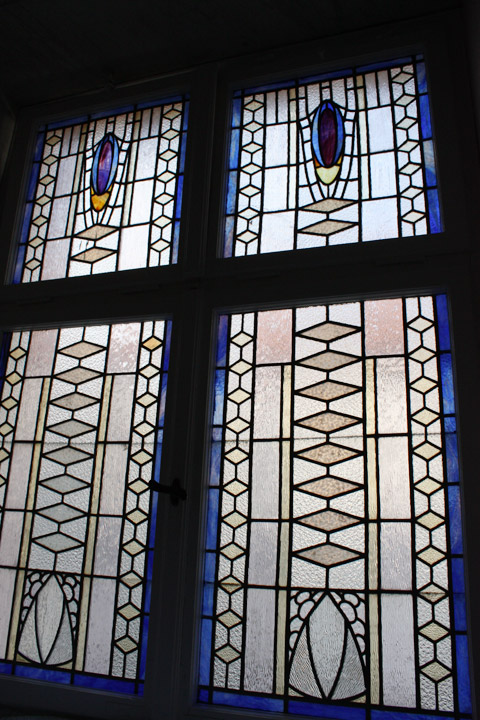 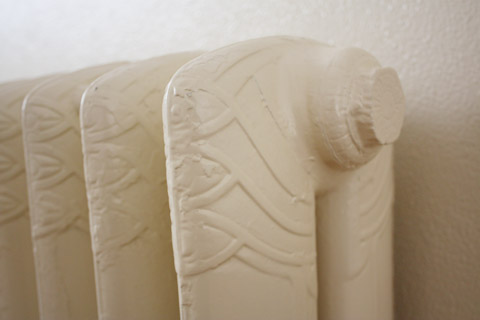 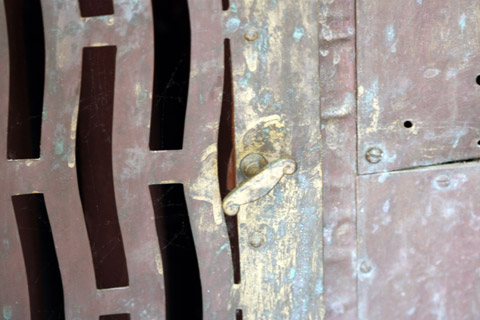 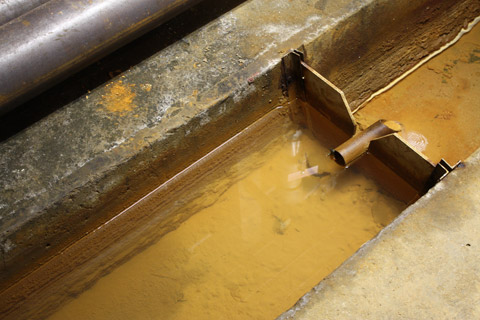 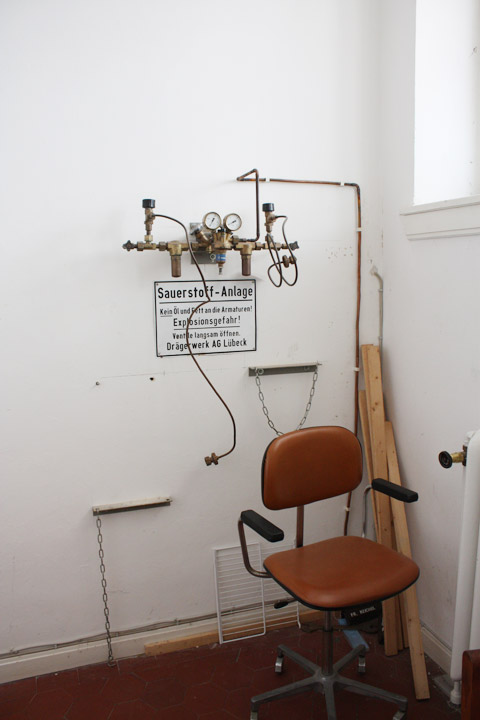 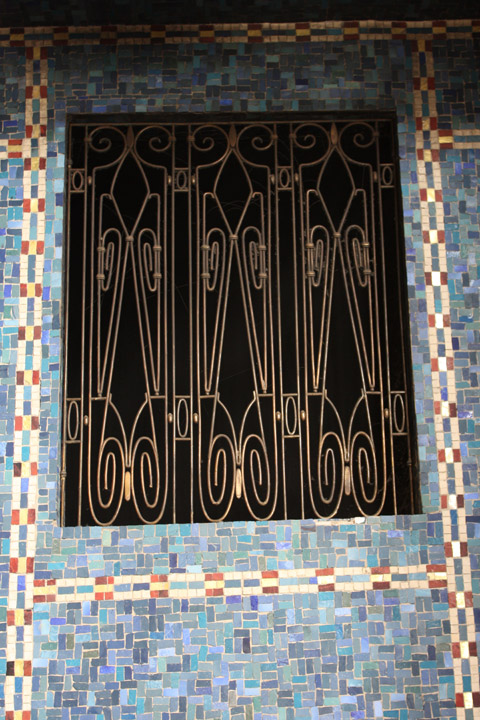 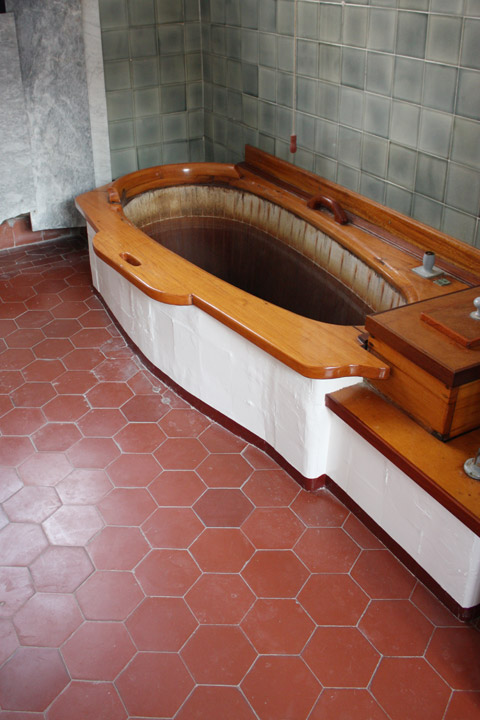 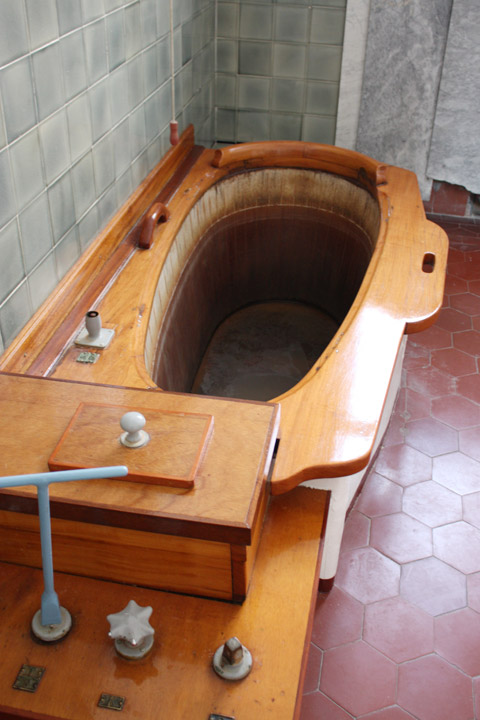 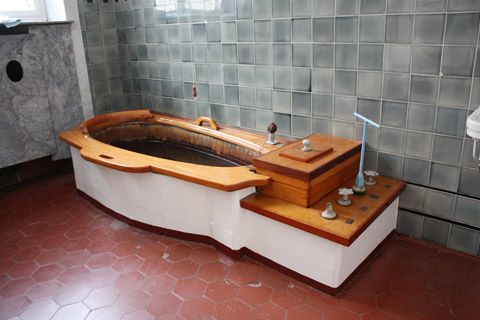 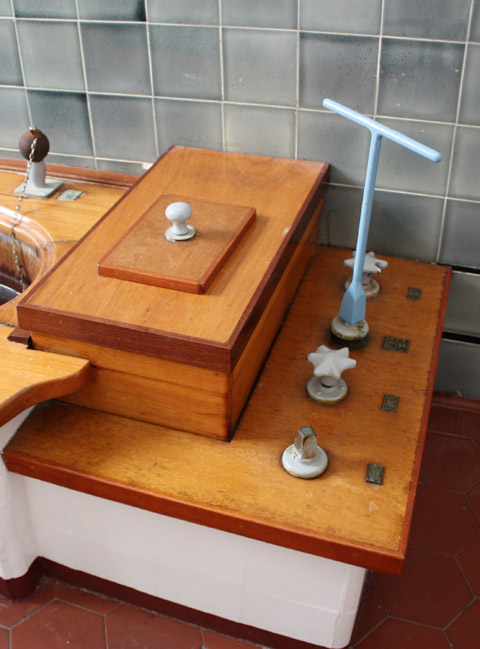 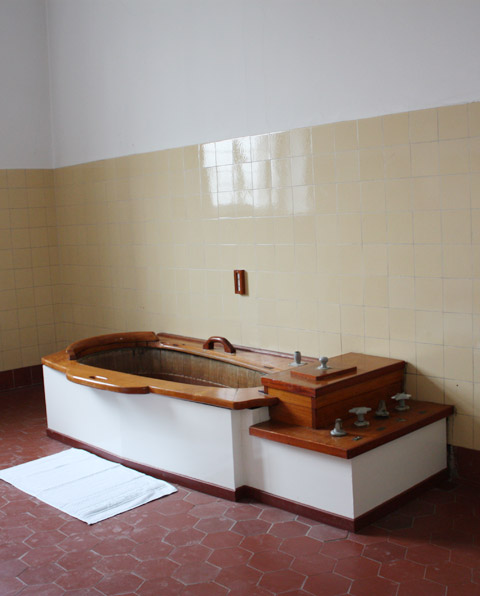 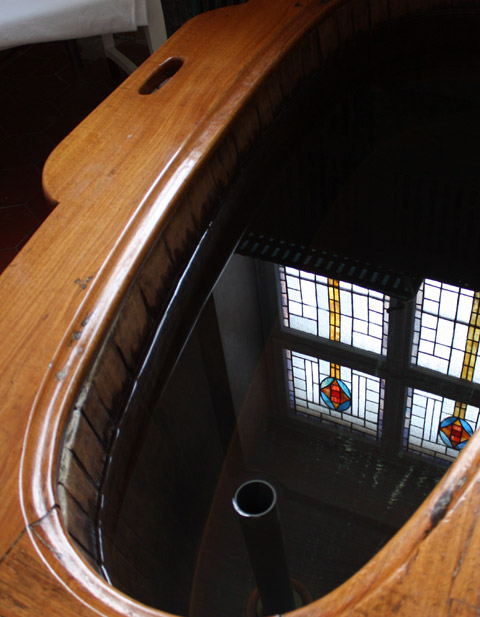 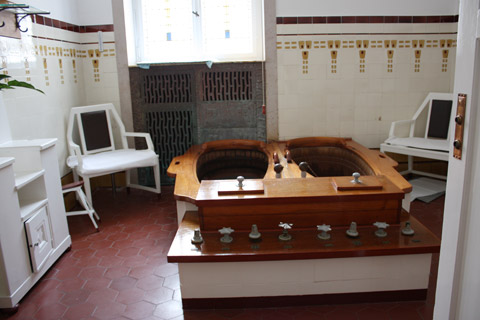 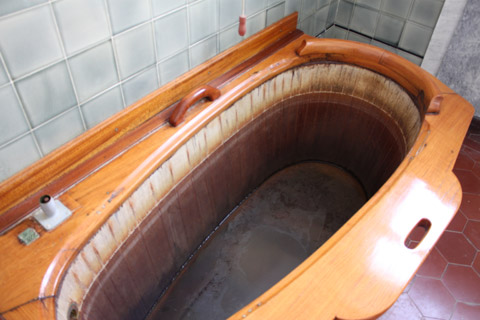 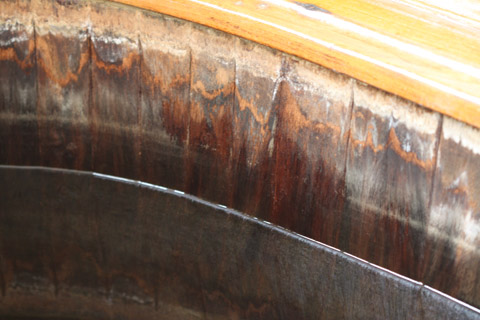 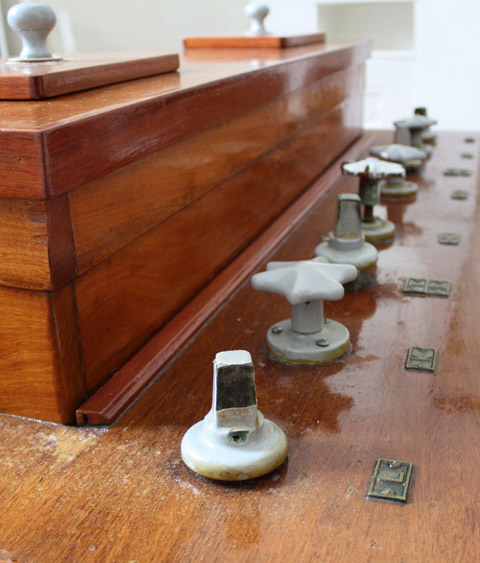 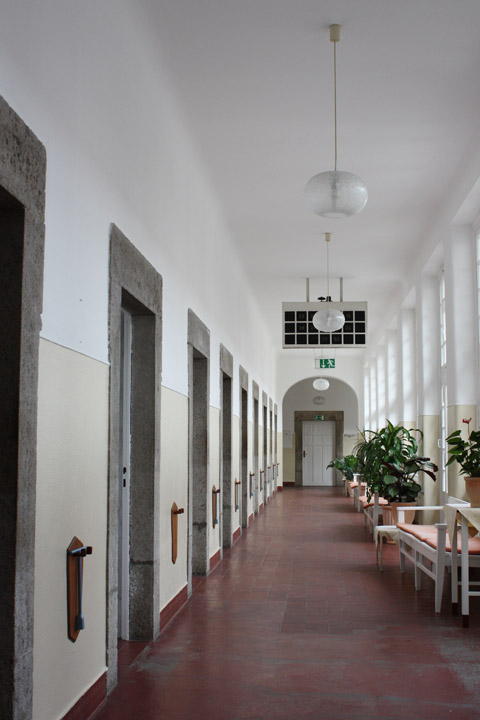 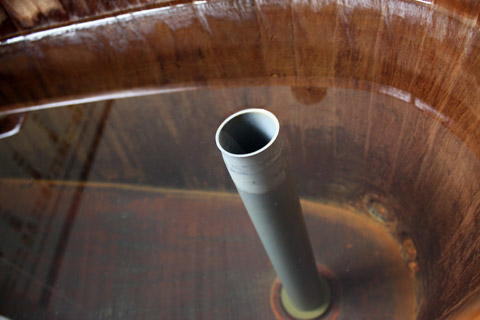 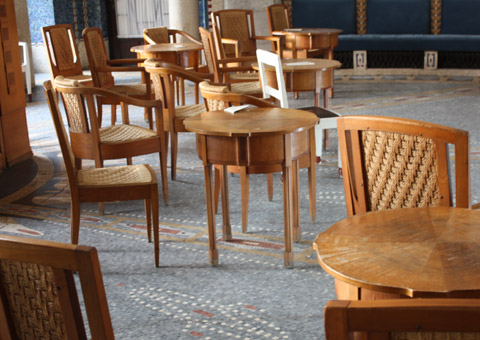 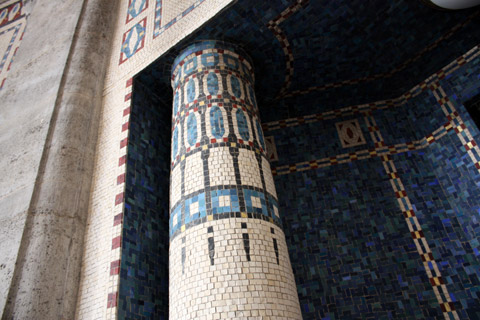 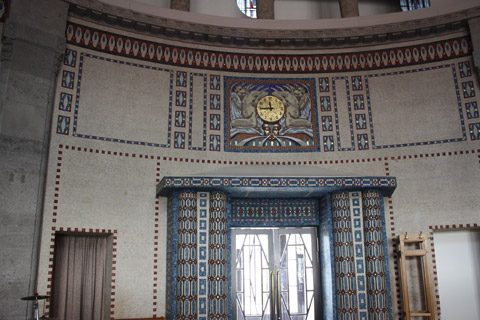 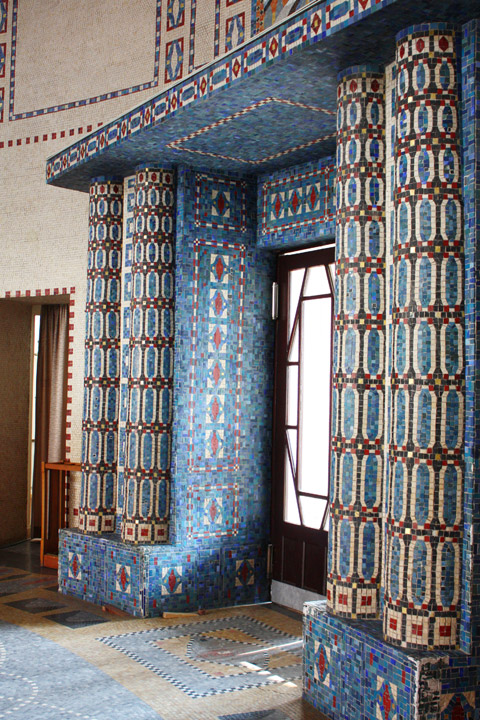