How can the design of an interior be up-to-date when new trains are on the road for at least 30 years? DB's design should attract more guests to the tracks. A strategy was developed for this purpose that is now beginning to catch on.
by Thomas Edelmann | 11/11/2022

Deutsche Bahn says that "as many ICE trains as never before" will be added to the tracks from 11 December 2022. Starting with the timetable change, additional trains of the new type ICE 3neo will be added month by month throughout 2023. A total of 73 units have been ordered. In addition, further seven-car ICE 4 trains and their extra-long XXL version will be put into service. In the coming years, Deutsche Bahn will invest approximately 10 billion euros in vehicles for long-distance transport. An aerodynamically shaped tube, painted light grey, with a black window band and a narrow stripe: Every child knows what an ICE looks like. But how is its interior developing? How will it meet changing requirements?

The procurement of a "very considerable number of new vehicles" was a good occasion, according to Bruno Scheffler, head of the brand design team at Deutsche Bahn, to make a comprehensive change in design. DB experts from the Customer Experience and Product Management and Design teams brought in the Swiss agency Nose Design Experience, which is now the lead agency for design issues for DB. It is all about a consistent strategy, not about decisions based on taste, Scheffler emphasises. Improved connections between Dortmund, Cologne and Munich are the first to be made possible by adding to the vehicle fleet. Frankfurt Airport can also be integrated into the rail network more strongly than before. The expansion of services is part of DB's "Strong Rail" strategy. Through a series of coordinated measures, the number of long-distance passengers is to double to 260 million. A so-called "Deutschlandtakt", a reliable integrated interval timetable, is to make the railway a role model in terms of punctuality, as the SBB in Switzerland, for example, has long succeeded in doing. The prerequisites include the renewal and expansion of the rail infrastructure as well as the stations and a continuous digital control system to increase the train frequency in the network.

A goal for tomorrow and the day after

The new design presented in May, a concept of how the railway company envisions the interior design of the fast long-distance journey in the future, will only gradually appear. Initially, the focus will be on technical and organisational innovations. These include window panes in the ICE 3neo, which are intended to provide better reception for mobile communications, or a repositioned luggage rack. Only gradually are elements of this objective being implemented, becoming visible and tangible. It is the dilemma of every design concept on the railways: trains are capital goods. Innovations need time to be integrated and perceived. Many years pass from the first concepts for a new train to the technical and design shaping, the tender to find a suitable manufacturer, the trial operation and the approval. A time in which the demands of passengers continue to change and with them the strategies of the railways.

To "feel like you're in your own living room at 300 kilometres per hour" is the goal of the new railway design. This becomes clear in the departure from the previous materiality. Until now, there were seats upholstered in blue velour in 2nd class and blue-grey leather seats in first class. Now there are textile covers in both classes made of a flat fabric with 85 per cent wool content specially developed with the Swiss manufacturer Lantal. Lantal specialises in technical textiles for the transport industry and is used to combining contradictory requirements such as durability, low abrasion, lightfastness and aesthetic appeal. In future, it will be the colour worlds as well as refined details that mark the difference in class, in addition to the more generous space conditions. The colour shades "azure" and "crown blue" disappear. In future, blue colours will only be used as accents to build a bridge - to the heritage of the DB brand ICE and the trains predominantly equipped with it, including the latest, recently delivered models.

An aesthetic that is considered sustainable

The use of leather is being significantly reduced. So far, there is no material that would be suitable as a substitute for the surfaces of the armrests or seats in the on-board restaurant. In future, the seats in the restaurant will no longer be upholstered in bright "traffic red", but in the quieter "burgundy", a dark shade that DB has already established as the service colour for its corporate clothing, which in turn was designed by Guido Maria Kretschmer. The decisive factor for the fashion designer was that the colour can be better combined with others and used over a wider area than the previous red warning colour. Since November, Deutsche Bahn employees have also been able to choose their official clothing from the collections, regardless of their biological sex. "Train attendants, customer service staff, train drivers or service staff can thus order items from both the men's and women's collections and wear them on duty," says Dr Richard Lutz, Chairman of the Board of Deutsche Bahn AG.

When it comes to HPL materials with a wood look, which play a major role in interior design, DB recently switched from reddish beech to light beech with the ICE 4. In future, light oak will set the tone, partly with a wood-like structure. In future, DB will give passengers in the train (the term "passenger" has largely been abandoned) more privacy. The space around their own seat will be functionally upgraded and supplemented. With row seating, the back of the seat in front of one's own seat will become part of this personal sphere. With the ICE 3neo, tablet holders come into play for the first time. In later train models, the back of a seat will be transformed into a folding secretary for passengers. In 1st class, there are additional folding elements in wood look for the tablet holder as well as a backlight. A retractable coat hook and areas for inductive charging of smartphones are also provided. If you ask Bruno Scheffler how close the new design presented in May as a 1:1 mock-up actually comes to the future of the railway, how seriously the details shown can be taken, he speaks of a "very concrete mission statement". Some of the innovations, such as the felt coverings on ceilings and walls, still need development and elaboration, he says. Every innovation makes it necessary to intervene in the procurement programme that was decided long ago. Since every change means additional costs and carries the risk of further delays, not everything that corresponds to the current design strategy can be implemented immediately. Especially at a time when supply chains are disrupted by many influences, from Chinese corona lockdowns to the Russian invasion of Ukraine.

In the case of the ICE 3neo, in 2023 the 17th of the newly delivered trains will bear some key features of the new interior design of the DB fleet, for example the new flat fabrics from Lantal. Another example of design processes at Deutsche Bahn is the train now called ICE L. Recently, a first carriage was presented in Berlin. L stands for "low floor", i.e. level access at platform height. In the mid-2010s, the DB launched a tender for "train sets" - it was looking for a train that, unlike all previous ICEs, would be pulled by a locomotive. In addition, it should also be able to travel to other European countries. Initially, it was called ECx. The passenger train is intended as a predominantly tourist connection, used for example between Berlin and Amsterdam or between Cologne and Westerland. Usually, the tender only contains textual descriptions of what is required. In this case, DB also included a design tender with renderings, prepared by the Munich-based company N+P Innovation Design. The aim was to get comparable offers, not just slightly modified examples from the respective manufacturer's construction kit.

The decisive factor for a tender is whether the expected services will be fulfilled and what the cost of the vehicle will be. Design is not decisive for the award, but some bidders took the supplementary design booklet seriously, which earned them plus points in the evaluation matrix. Among them was the Spanish company Talgo, which was awarded the contract. The company has a special construction principle: it produces articulated trains that are particularly light. Instead of the usual bogies with two axles at each end of a wagon, the Talgo trains have a single-wheel chassis between the short and wide wagons. This not only reduces the total weight and the energy requirement. It also allows the floor of the train to be lower. The criticism is that there will only be three places for wheelchair users in the 17-car train. Only one of the eleven toilets of the ICE L will be spacious enough and barrier-free, which, however, has hardly anything to do with design, but all the more with the equipment specifications of the DB. After the Spaniards were commissioned with the construction of 23 trains, they developed an interior with the German agency Tricon that took up the wishes of the design brief. In the meantime, however, DB was in the process of further developing its design strategy for long-distance transport. The order includes specially designed multi-system locomotives that can also travel abroad without time-consuming coupling. Problems in the supply chains led to production delays.

Thus, the ICE L will not be delivered from 2023 as originally planned, but only the following year. In the meantime, DB and its lead agency Nose have revised the design - in the exterior as well as in the interior. Against this backdrop, the term durable design takes on a new meaning: during the design process, it had to change several times in order to last for decades once it had been put on the track. From 2030, a next generation of high-speed trains is to replace today's ICE 3 trains, which will then be on the road for around 30 years. Their entrances are also to be low, as with the ICE L. By then, the DB's "new" design will have become established. Bruno Scheffler and the Nose agency are already working on concepts of how design will take shape in the high-speed train of the 2030s.

In the exhibition Design & Bahn in the DB Museum Nuremberg, the chapter New Interior Design forms the recently completed final chapter. The exhibition can be seen until 13 November 2022. 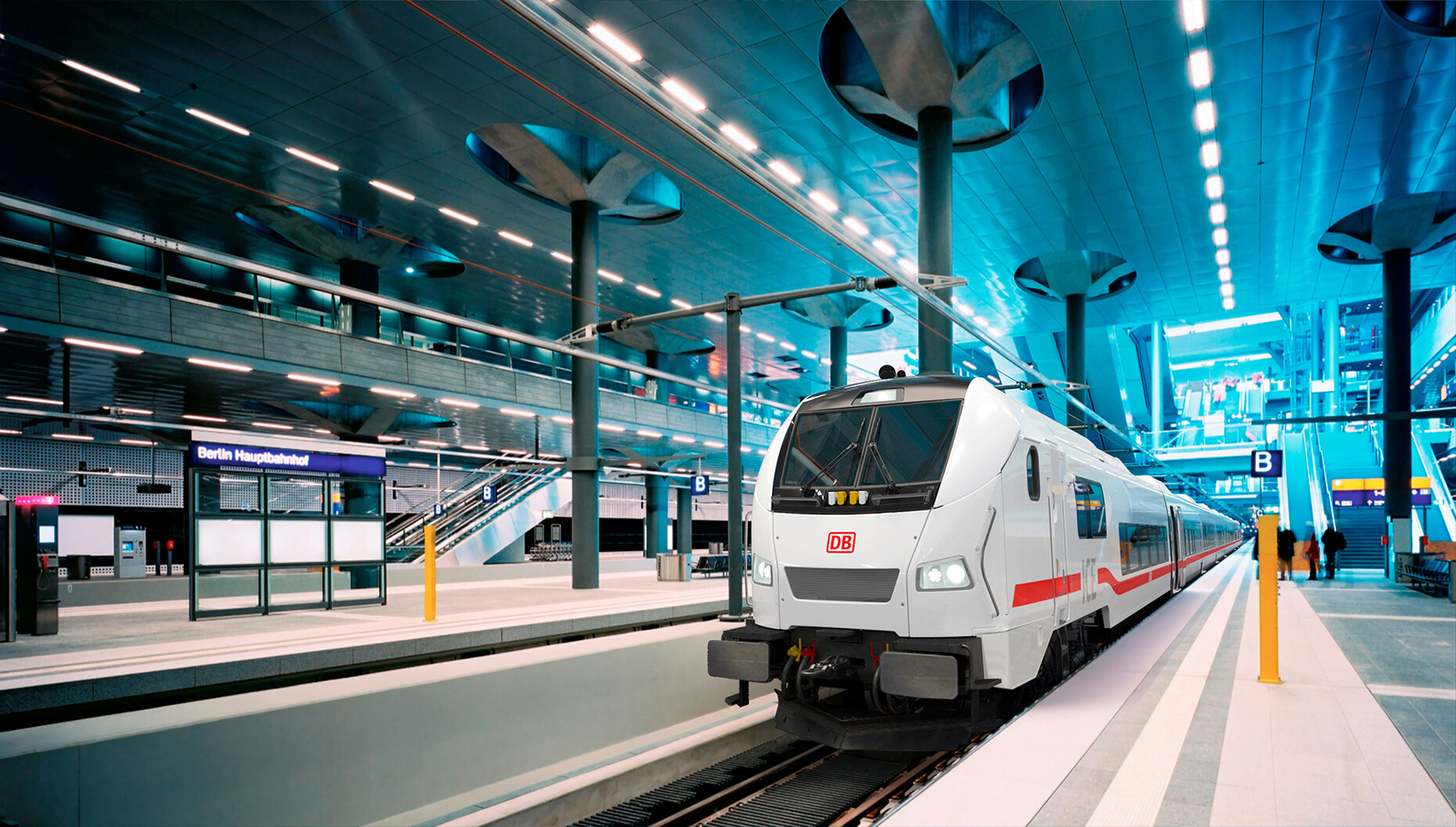 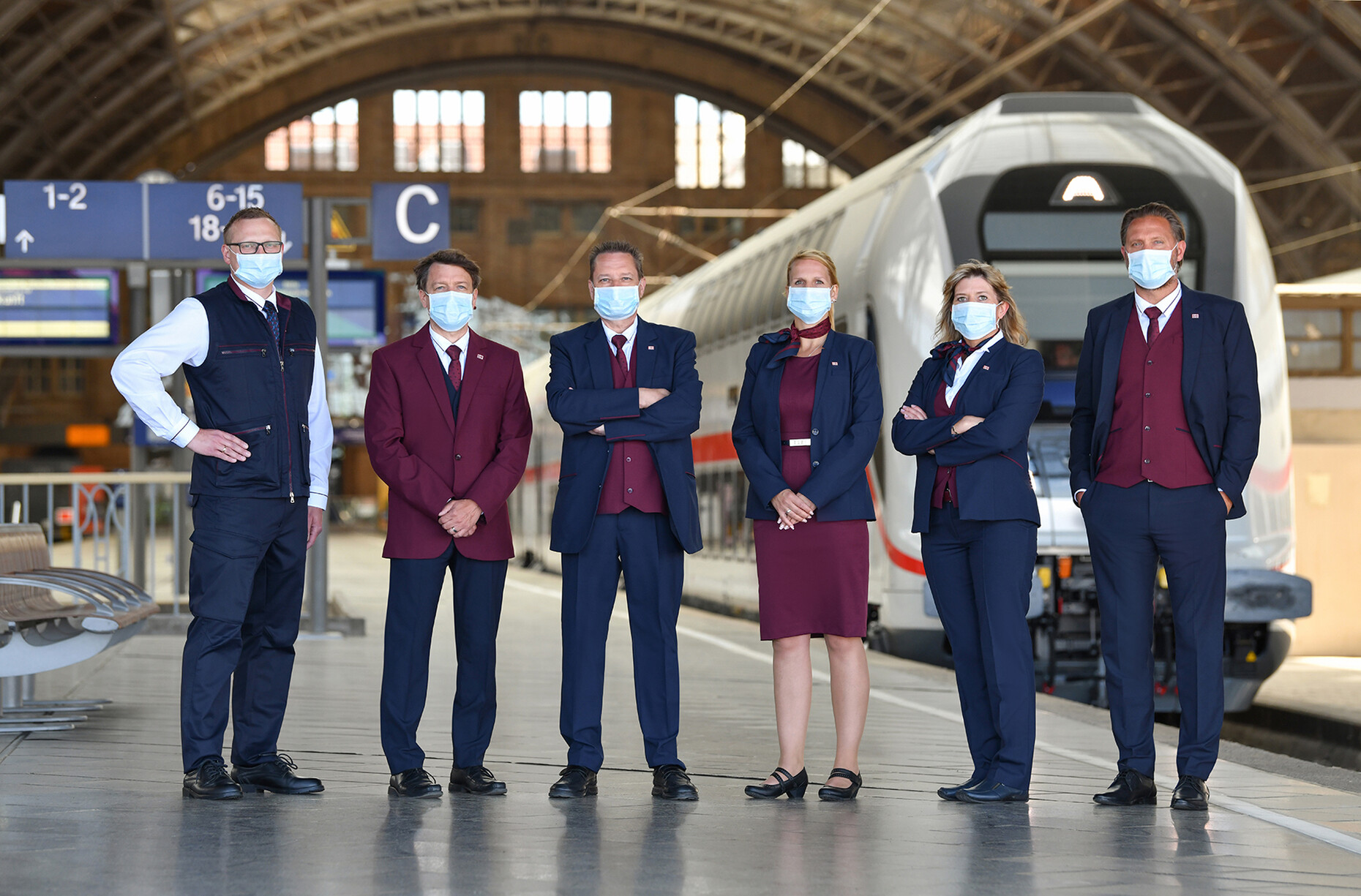 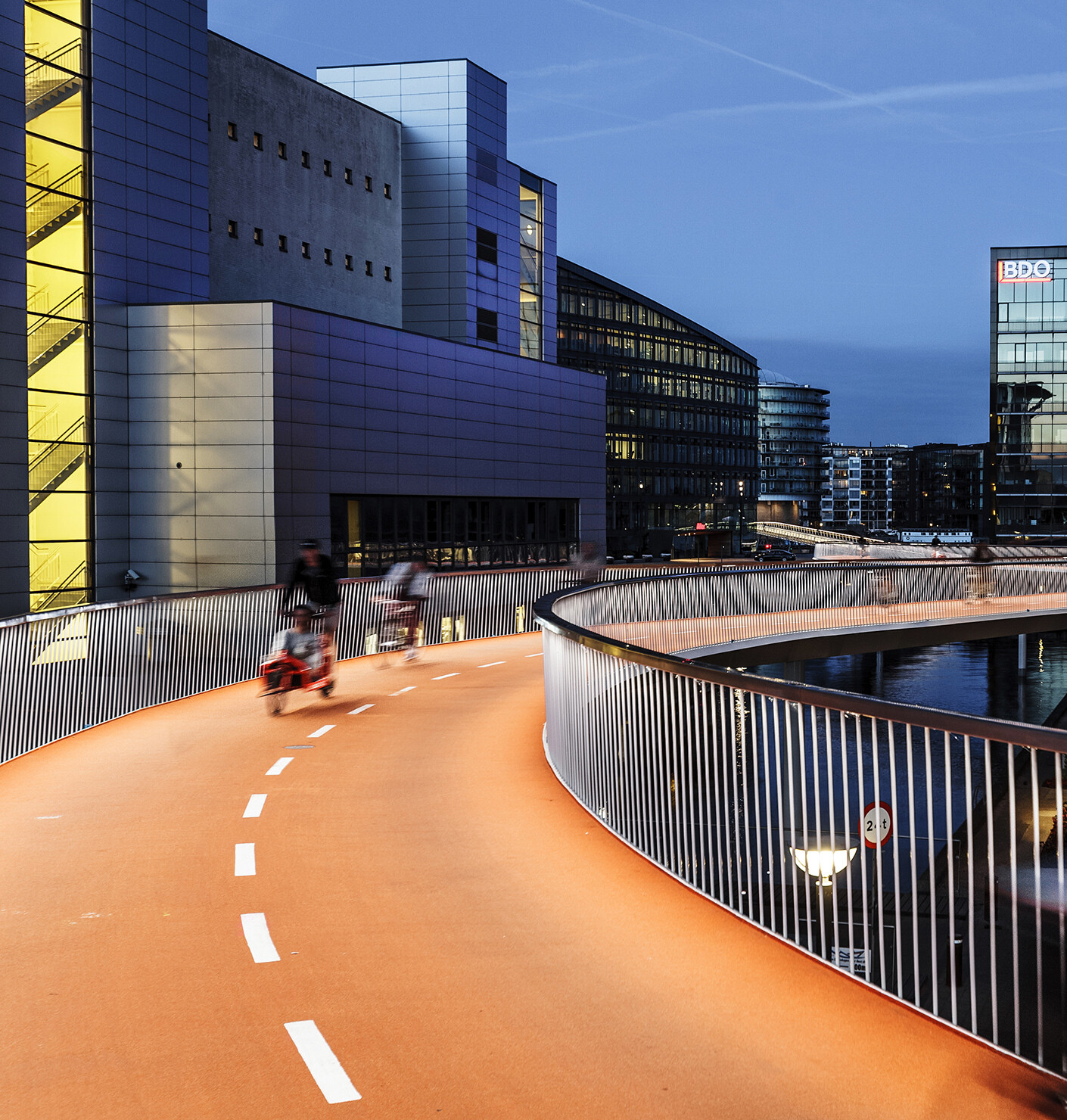 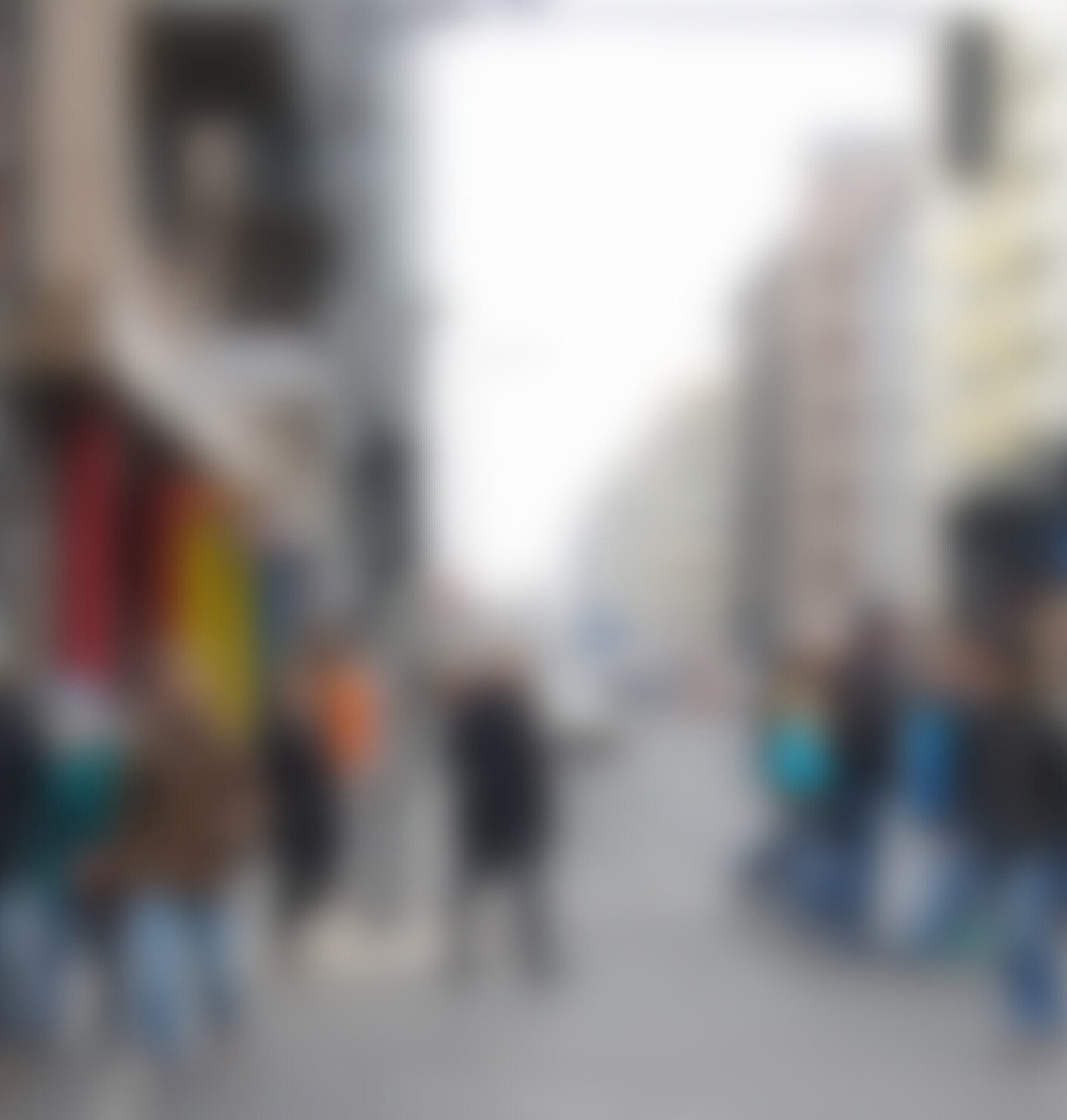 Dr. Thomas Kusitzky is a researcher and consultant for urban sound design. In an interview he tells us why addressing the issue of sound is important for both living in and experiencing an urban area. 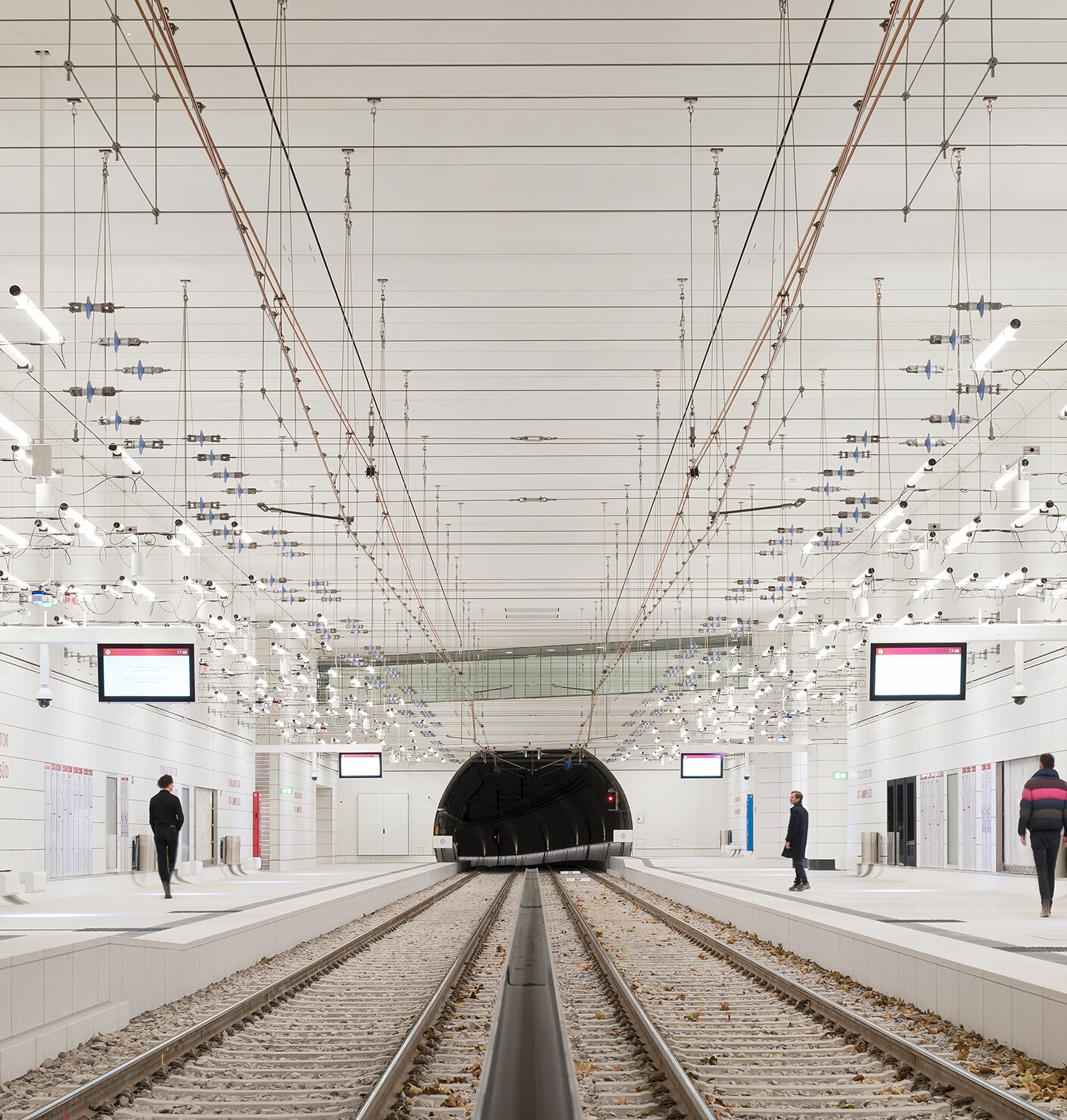 Seven new subway stations in Karlsruhe were completed in December 2021. The lighting concept for them was created by Ingo Maurer, whose design forms an exciting combination with the restrained architecture. 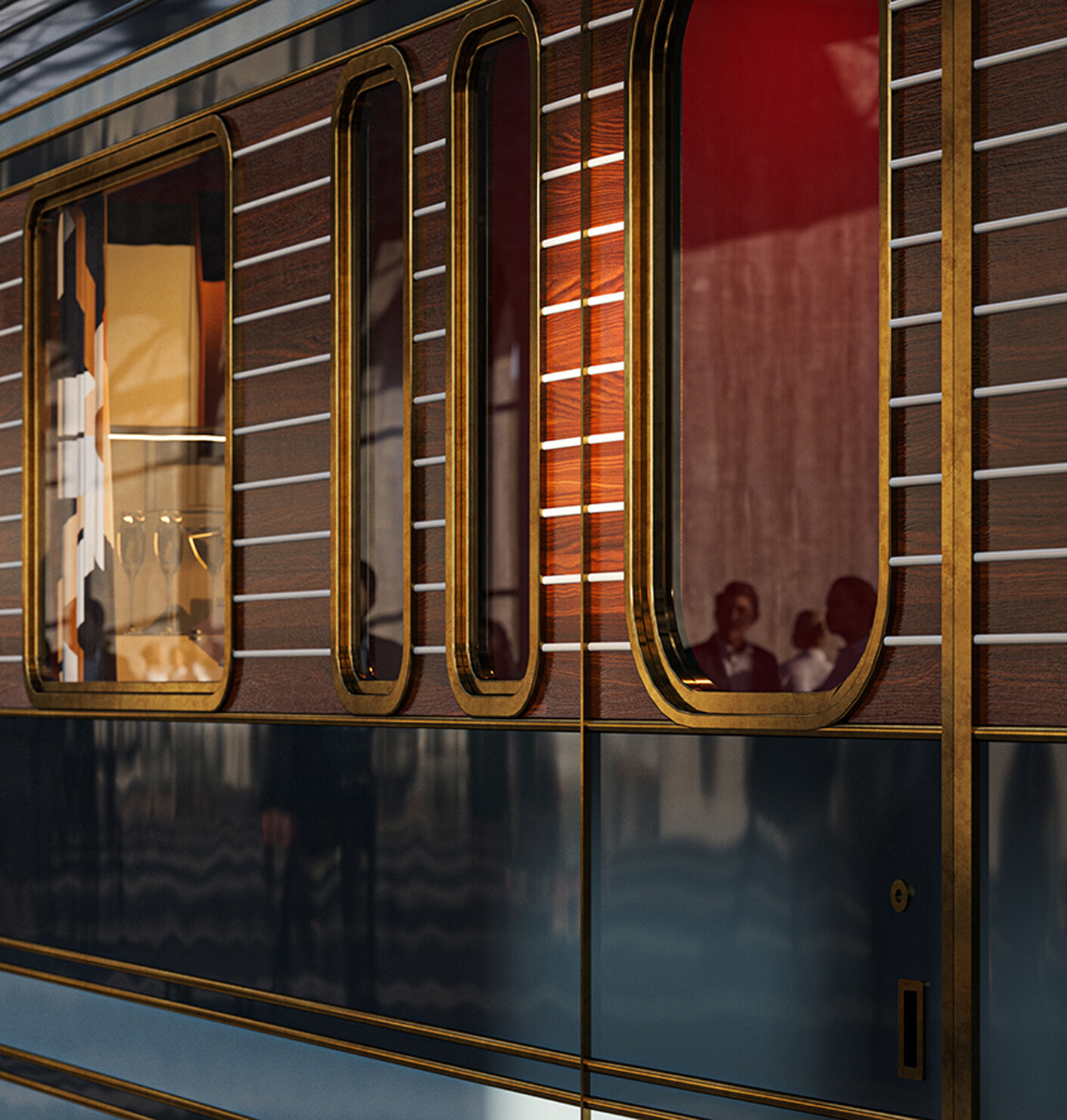 The Orient Express La Dolce Vita is set to revive luxury pleasure travel from 2023 with routes in Italy as well as connections from Rome to Paris, Istanbul and Split. The train design is by Dimorestudio.
Advertisement