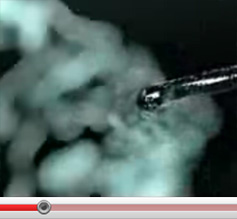 Ok, you have to be pretty bored to come up with the idea of entering the names of household objects as search items in Youtube. So let's assume that we are bored to tears. We have already clicked through all the latest hot viral ads, videos of cats and animated films by art college students. Our gaze wanders from the laptop, sweeps through the kitchen and pauses at the pile of dirty dishes. Suddenly, we feel tempted to type the word "faucet" into the search field.

There is an amazing range of results. There are filmed plumbing instructions, cute cats (of course!) sitting on the edge of the sink licking water from the faucet and a bearded American with a guitar singing about his dripping tap (did The Cure not do that back in 1979 with "And the tap drips: drip, drip, drip, drip..."?). And then there is a film about the new Karbon Faucet by Kohler.

This film is by far the most ambitious work among the search results. We may well have hitherto associated taps above all with profanities such as piles of dirty dishes and ice cold water in our face at 7 a.m.; maybe we also thought of design objects by Arne Jacobsen or dysfunctional slide controls - but this is much more. It is great kitchen fixture cinema with 320 x 240 pixels.

It starts with a kind of noise-less big bang. A flashing cloud billows through the dark universe and looks roughly like how we imagine the thinking ocean in the science-fiction classic Solaris. Electronic music is playing in the background, complete with a distant depth-sounder à la "Das Boot" - with which we already have two references to movies within 13 seconds. Then the greenish-blue cloud gradually reveals itself as a rippling water surface in close up, which in turn becomes a steam of water filmed in slow motion. It slowly morphs from its original spray shape into the shape of a smooth pole of clear water. Suddenly the water in the empty, dark space changes the direction it is flowing in and bends at a right angle. We realize that it is tracing the form of an angular object. And then, cut!, we are inside a silvery faucet and shoot out of the filter. Only now do we see the Karbon faucet from the outside. "New. Life. Form" promises the slogan. Meanwhile the music has swelled into a widescreen hymn in the manner of Sigur Ros.

All of it is technically perfect and done very nicely indeed. And it fits in with the internet advertising trend, although it is not "viral marketing" in the classic sense. For in fact the whole film is only about holding the viewer's attention with pretty pictures until, 17 seconds before the end, we finally see the Karbon Faucet. What the faucet can do and what it offers are irrelevant however. There is no mention of its especial flexibility or the fact that it is the first tap made of carbon fiber. Instead of stating facts like these, the film aims to evoke feelings and when this is done skillfully, it evidently works even with a film about a sink fixture. "Such a beautiful work of art", comments one visitor; another simply writes "I want one". The ad filmmaker completed his mission. Or, as manufacturers of fixtures say, mission mixing accomplished.