With an almost pedantic love of order the strictly geometrical grid of the shelf system arranges the gray cardboard boxes, all boasting the same design. Some of the sleeves to be archived are stacked at the front indicating (as does the ladder propped up at an angle in front of the shelving) that the "archive" is supposedly used; one cardboard box is open, attesting to the lack of content. No clue, no notable information as to the context portrayed sheds light on the curiously cool setting that sticks to the surface, that is cleansed of any human trace. Everything looks too perfect, almost aseptic, for it still to appear realistic.

"Order is the improbable and thus one of the forms in which art appears," is how Botho Strauss, for once prosaic, paraphrases Thomas Demand's 1995 work "Archiv" (1995), which forms part of the exhibition curated by Udo Kittelmann in the Neue Nationalgalerie in Berlin. The archive, a place where things are collected and stored, a haven guarding information and documentation of historical facts, a research pool and memory in image form, is truly a paradigm of how the artist works.

Demand constructs life-size paper models using found images, which he culls from the press or private contexts, and then bases his photographs on the models. Despite his painstaking efforts to create illusionist deception, the model nature of what is portrayed is at all times visible in the photo. Tiny irregularities caused by the material, the lack of details and the resultant impression of void, at first sight create diffuse skepticism towards what is visible. As such Demand's photographic tableaus operate on the basis of expectations, which in the works are confirmed and questioned at one and the same time. Only when you read that this is actually Leni Riefenstahl's archive does it seem possible to give meaning to the room devoid of information and break up the way the model seem frozen in time, the picture rigid and unyielding.

However, what do we ultimately gain cognitively from identifying the act portrayed? Were Demand's works to function solely by their motif being deciphered, what more would they then be than a rather laborious variation on traditional documentary photography with a leaning towards image guesswork?

Demand works more as a sculptor than as a photographer, as someone who makes models of a reality that itself turns out to be a model. When the photographic image is completed and the built paper models can be immediately destroyed, or, as Thomas Demand puts it, "with the sculpture's physical expiry date" the aspect of time, which is closely related to the material used, paper, also comes into play.

In "Büro" (1995) Demand once again takes a place where documents and files are administrated as his subject matter, although the chaos of cabinets that have been broken open and sheets of paper strewn about the place reveal that it has been robbed of its original function. "Büro" references a press photo that did the rounds immediately following the fall of the Berlin wall showing the storming of the Stasi HQ in Normannenstrasse by enraged citizens. As in "Archiv", paper here is anything but innocent material. "It is easiest to make every model, every type of quick visualization with paper - and you can get rid of it again quickest as well. Not only practically, but emotionally as well," Demand once said in an interview with Hans-Ulrich Obrist. Here he champions a deliberate distance to the material. Paper serves both as a means of creating the models and as the theme, which engenders that analogy of levels of reality that raises the specific and Individual nature of the starting point of each image through its revision in the model and the latter's photographic reproduction to the level of the general and prototypical, and transforms it accordingly. According to Demand, he was interested "neither in the banal place nor the argument about what happened, but what remains as legend and takes on an existence of its own."

In "Badezimmer" (1997), one of Demand's most famous works (it references the death of German politician Uwe Barschel), the bath tub, as opposed to the now famous photo in "Stern" magazine, is empty. The terse title given the image, characteristic of Demand, increases the scope for interpretation. The impressive effect, however, is guaranteed all the more if the observer's imagination, fed as it is by memory in image form, can fill the void with "free" associations. In this case the starting image of a given reality seems merely to serve to cradle the observer's view in security, thereby continuing the photograph's legend. Demand demonstrates that the act of representation is an open process by putting the model status of the photograph itself in the picture. In doing so he is not so much bothered about the technical implications of the photographic image, as the media, pictorial, social and cultural conditions in which it is made and its reception.

This is the "logic of simulation" Jean Baudrillard described, saying it was "no longer about imitation, doubling, or parody, but about substituting reality with symbols of reality".

Demand's works explore the possibility of a neutral, non-manipulated, "innocent" image and they relate scenes of crimes only perceived in an ideologically charged manner. Whether in the photo of Hitler's devastated HQ in the Wolfschanze following the failed attack on him ("Raum", 1994) or the reproduction of the "Heldenorgel" in Kufstein, completed in time for the exhibition opening: In the creative process Demand's photographs dissect the places shown and liberate the from an iconographic clasp, before allowing them to take shape again as prototypes of a publicly effective memory in image form. For this reason they are still lifes rather than historical images, and as such it would appear to be mistaken to reduce Demand's photographs to the documentation of a representative image of Germany, as the exhibition title "Nationalgalerie" and the accompanying catalog suggest. Here a curator unfortunately makes Demand's artistic oeuvre function as a corset for his own exhibition policy, which also embraces the symbolically highly charged setting of the Neue Nationalgalerie.

So if anything it is questionable whether this conceptual constriction really helps Demand's work cut a better figure. This becomes particularly evident given the literary captions by Botho Strauss, because - always bearing in mind that this is an exhibition that the curators claim is of - how is one to interpret a commentary of the picture of the unsuccessful attack on Hitler, which enthuses about the "mystically gifted in Hitlerism" and continues: "The people were not "seduced " - they seduced their seducer?

By way of contrast with diluted rhetoric such as this, the elegant exhibition architecture by the London studio Caruso St. John Architects comprising curtain fabric made available by the Danish company Kvadrat, Europe's leading manufacturer of contemporary, innovative fabrics, hanging freely from the ceiling, comes across as the actual constructivist moment in claimed identity work. In heavy folds the pieces of fabric drop down gently to the floor and with their thick feel and neutral color exude a warm counterpoint to cool glossy< laminated photographs, which appear to hover weightlessly in front of what is almost five kilometers of fabric architecture. The curtains celebrate Mies van der Rohe's transparent architecture, highlight the axes of the glass hall as the labyrinthine stage of a reflective gaze and reference the photographs' trompe l'œil effect by once again putting up to debate the relation between image, model and reality. 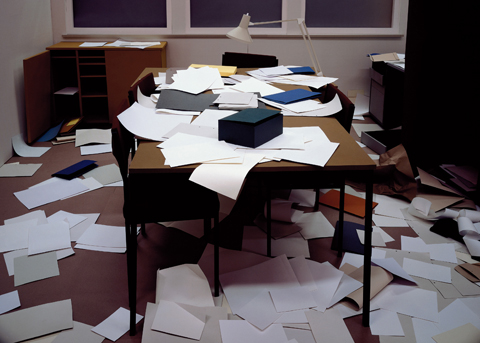 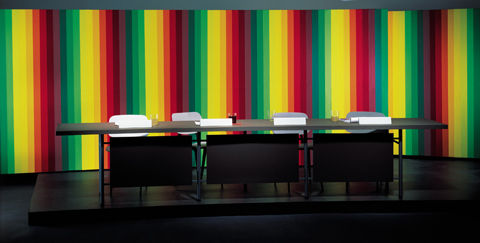 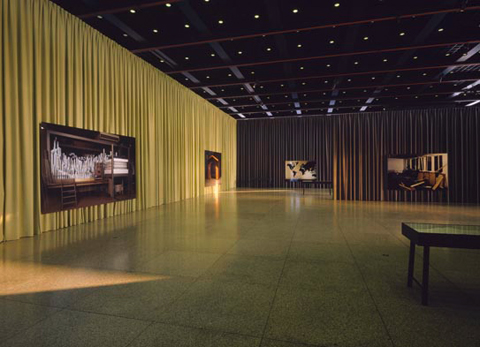 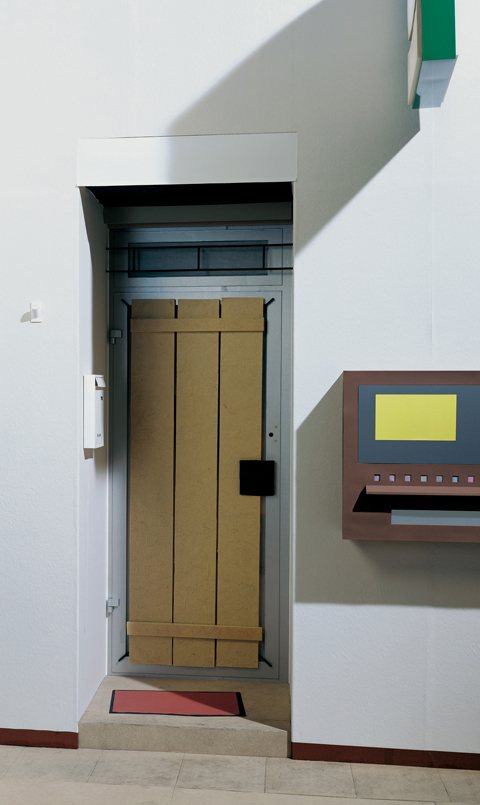 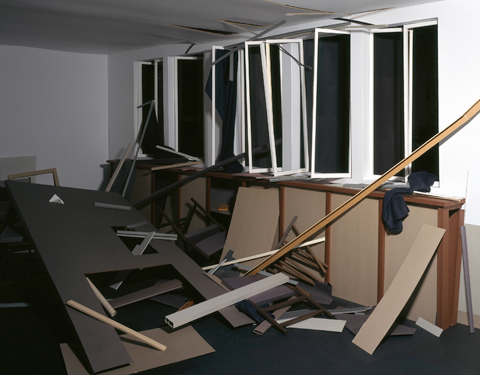 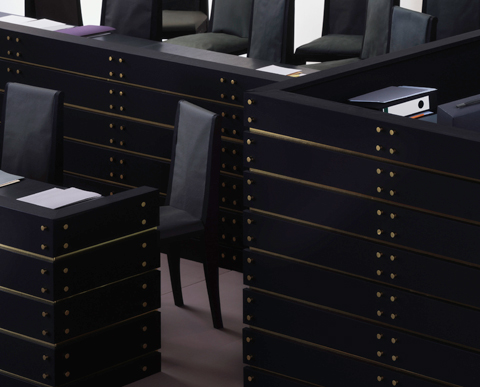 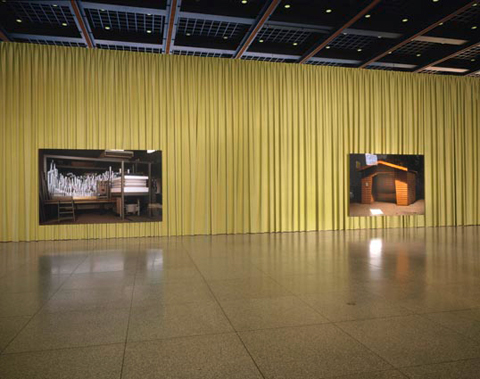 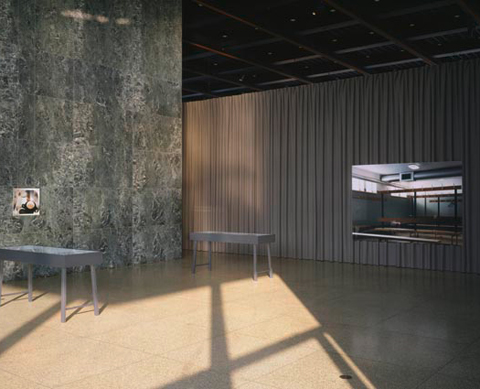