There are two residential buildings in Denmark made of the same hand-painted bricks. "Kolumba", which Peter Zumthor developed in 2007 for the eponymous art museum of the Archdiocese of Cologne, is the construction material for two different types of building.

One, a solid-construction luxurious villa, is in Kolding, Denmark. Here the developer had the idea of a modern residential building made of Petersen "Kolumba" tiles from the very start. When the first sketches were on the table, he visited the Danish brickworks several times to inspect sample walls in the two to three colors he was interested in.

The actual construction stage then also began with a sample wall on the site, to test the effect of the stone's color in its real environment. The house is now complete: one storey where the entrance is, with no visible pedestal and which thus seems to grow directly out of the ground, two storeys facing the fjord, and a basement level made of in-situ concrete. It is a stylish building, not least owing to the precisely coordinated materials: Together with the walls, the raw concrete, tombac on the oriels and veneer and cladding create a harmonious overall impression. The horizontal lines are highlighted by non-flush horizontal joints and flush butt joints. The rectangular form of the "Kolumba" tiles underlines the building's quiet, sovereign character.

The other building, a grand weekend retreat, is located on the Kattegat Fjord in Denmark. For five summers the clients, a family of five, combed the land in a ten-square-meter trailer looking for the perfect place for their longed-for summer house: a forest about 30 meters from the steep slopes of the fjord.

Fitting in with the long run-up and search phase, it took two years for a Finnish carpenter to erect the house's wooden structure using only wooden dowels; no screws. The living area is on the ground floor, with a column in the center combining the fireplace and kitchen island. A large chimney core made of "Kolumba" tiles is now the architectural centerpiece and the anchorage to the plot of land. On the outward-facing side there is a fireplace for cooler days, while inside, where the chimney dominates the interior design, it has a work surface for preparing food and is at once a stove and airless oven. The client was looking for a suitable material himself to serve as a harmonious counterpoint to the dominant spruce. He came across Petersen's "Kolumba" tiles in an architecture magazine.

"I wanted a stone of the same size and with the same surface effect, and so I visited the brickworks, which, together with the architects Lundgaard and Tranberg had just developed a new version of the "Kolumba" tile for the theater in Copenhagen. "Kolumba" was available in two versions then, but I wanted a stone that looked like another stone from the Petersen range. The brickworks obliged and produced a new version in yellow, English clay: The tiles are shaped and painted with white clay paste by hand before they are dried and fired. The result: light colors and a very special transparency, which blends harmoniously with the light, untreated spruce wood." 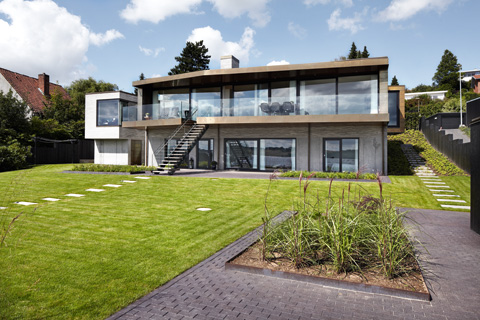 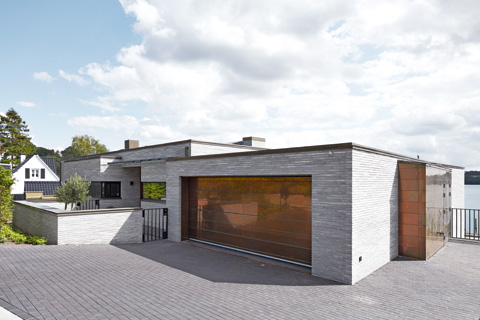 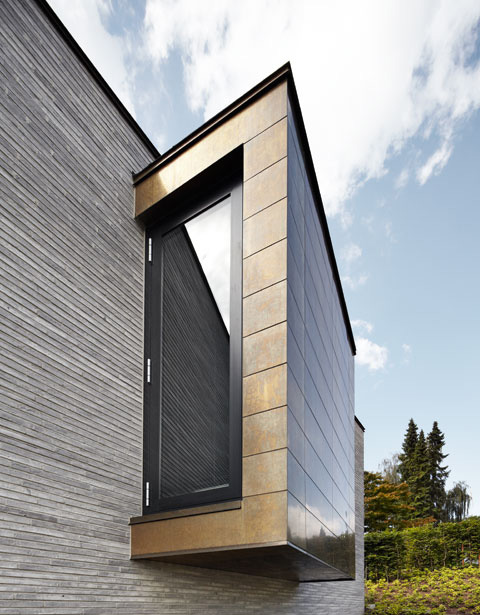 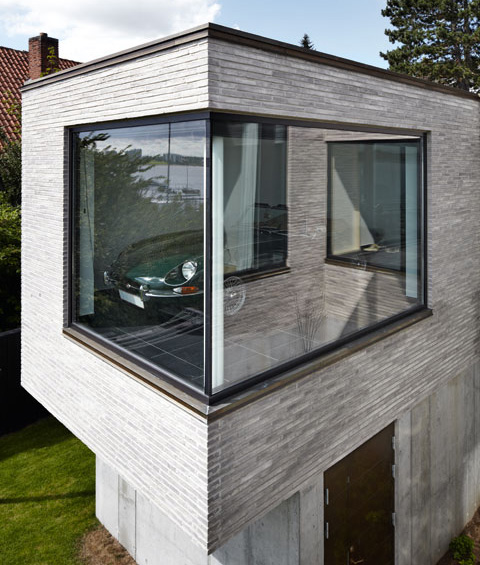 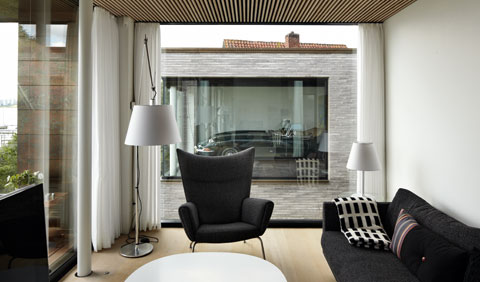 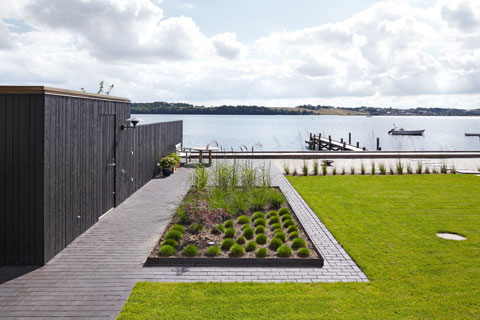 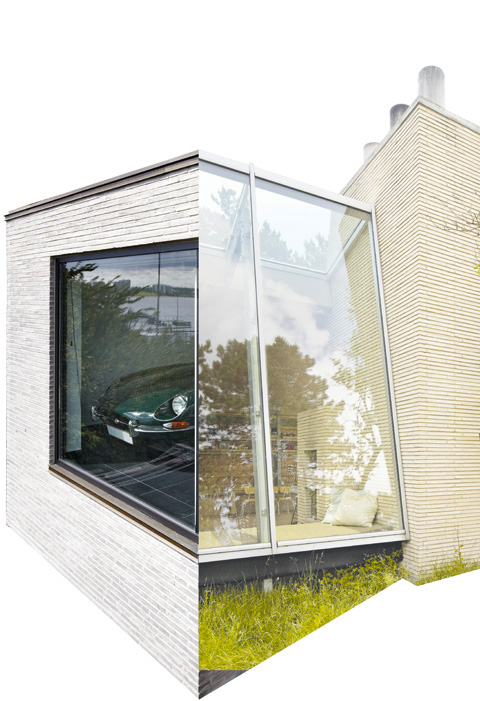 Collage of two houses: the Villa on the left in a gray "Kolumba" brick, right, the weekend house in yellow brickwork | Photo © Anders Sune Berg 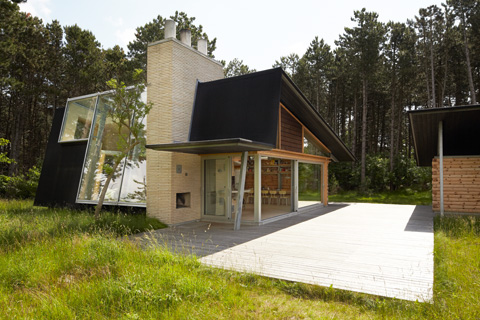 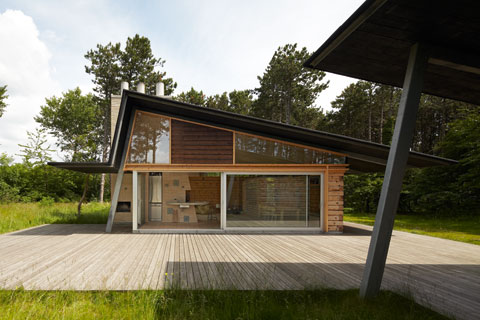 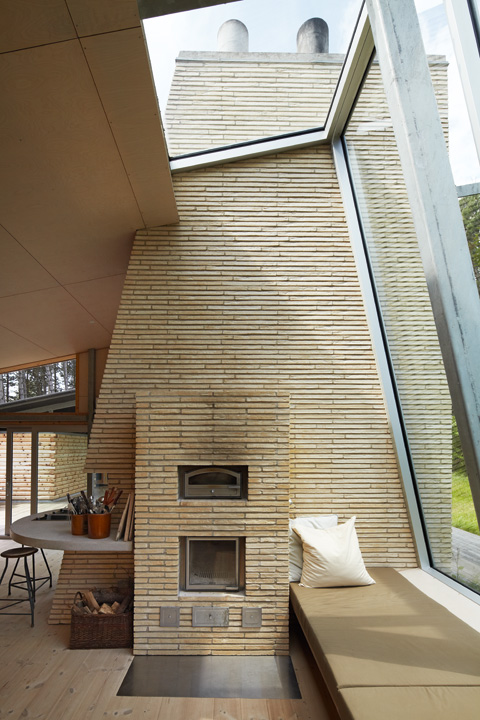 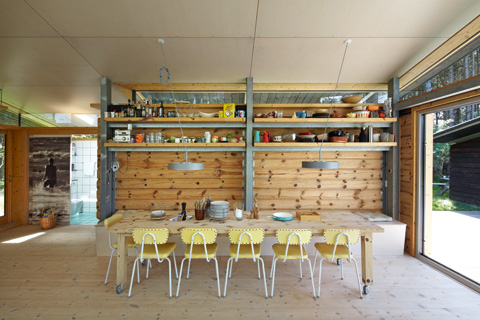 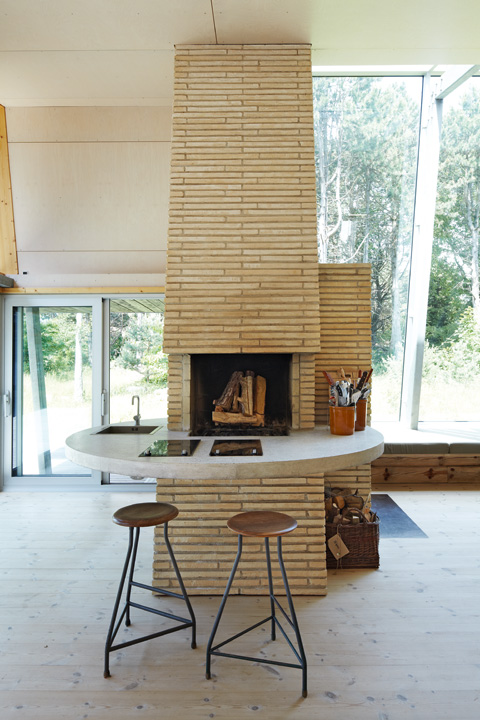 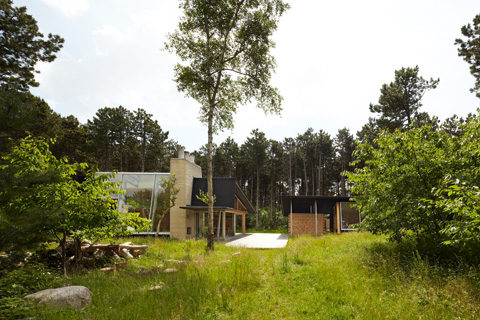