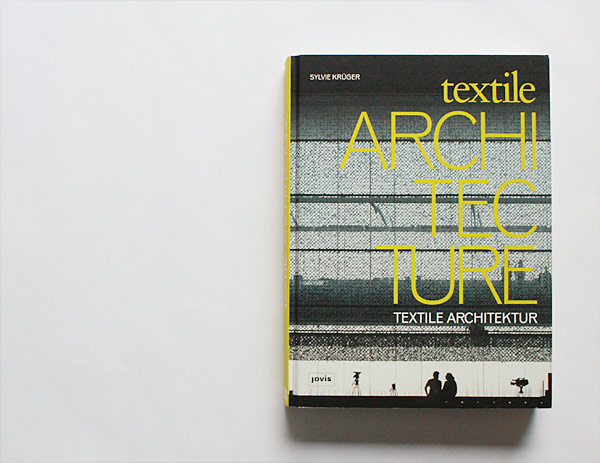 Manifold are the uses of textiles in architecture - and this does not only hold true for the present. However, even those who suspected this will hardly have imagined the great variety and ingenuity of possible applications (including those in the past), even more so as new materials have extended the range considerably over the last years. With the multitude of inspiring examples and new design opportunities it describes, Sylvie Krüger's volume "Textile Architecture" provides a welcome remedy. Be it in the form of a building tarp or tent, an umbrella or façade, a partition or a vanity screen, be the product made of natural fibers or high-tech foil. In fact, it has become hard to conceive of architecture without textiles. Even if their importance decreased when humans started to become sedentary, the nomadic mentality has survived somewhere along the line. Nowadays, we once again appreciate textiles' flexibility and adaptability. For textiles in a building can adapt to the given circumstances, be light, transparent or opaque, delicate or voluminous, they can protect us from the sun, wind and cold, muffle sounds and sometimes even become something like an externalized second skin.

In three chapters that distinguish between vertical, horizontal and three-dimensional textile space dividers, whereby each is introduced by a concise but informative "historical overview", the reader finds numerous, well-illustrated tips on how and where textiles can be used in architecture. Moreover, the book distinguishes accurately between the different possible applications. In the historical introduction to the chapter "on vertical textile space dividers, for example, the reader learns that an "outside curtain" refers to textiles which "vertically, either completely or in part, conceal a scaffold or building façade outdoors". And they also learn that a so-called "curtain wall" is located behind large glass façades and "prevents light from entering and people from seeing into the building".

Mies van der Rohe, for example, liked to use curtains - in the Villa Tugendhat (made in 1929-30) as well as the Farnsworth House from 1950-1. He felt they prevented that sense of forlornness one can get especially at night when the glass façades give the impression of black surfaces reflecting the interior. Moreover, the reader learns that the King at the Sassanid Court was concealed by a curtain which opened like a theater curtain during audiences; thus, it was used to orchestrate an alteration between concealment and the display of power. In addition to functioning as flexible partitions (and that includes the sliding rice-paper-clad partitions in traditional Japanese houses) textile materials can also create a "room within a room". This is a device with which we are familiar from medieval four-poster bed curtains or exhibition architecture. While in the past vertical partitions were often a means of representation, today they, first and foremost, serve the purpose of insulation, heating, privacy or variable room partitioning.

The examples provided in the illustrated section and explained with concise captions range from curtains in Spain that ward off heat to Shigeru Ban's "Curtain Wall House", from curtains that on the occasion of the "Inside Outside" exhibition at deSingel in Antwerp (printed with grass patterns) and the use of partition curtains in gymnasiums, like the ones the architects Allmann Sattler Wappner have installed at Paul Horn-Arena in Tübingen, Germany, right through to the textile "tiles" Ronan and Erwan Bouroullec developed for the showroom of the textile manufacturer Kvadrat in Stockholm.

Even though the author includes some other examples here and there, her focus is clearly on architectural applications, which explains why the artistic use of textiles (e.g., in the buildings wrapped in fabrics or land art projects by Christo and Jeanne-Claude) is only mentioned in the historical sections or occasionally slipped into the illustrated ones.

In addition to "classic" textiles, as it were, she also introduces foil and membrane materials that can adopt "textile" functions. They range from Massimiliano und Doriana Fuksas' Zenith concert hall in Strasbourg, whose structure is surrounded by a case measuring 12,000 square meters. It is made of silicone-coated glass fiber and consisting of five elliptical rings, shines like a huge lantern at night. And include Herzog and de Meuron's translucent skin for the Allianz Arena in Munich, which is made of foil pillows that shine in different colors.

Moreover, there are umbrellas and canopies which serve as movable and temporary roofs like. For example, the one realized by Jürgen Mayer in 2003 at the initiative of Stylepark and in cooperation with Nya Nordiska on the occasion of the ISCID conference for the Atrium of the Ernst-August-Carré in Hanover. However, the book also presents contemporary tent and pavilion architecture from the German Pavilion Frei Otto and Rolf Gutbrod created for the 1967 World Exhibition in Montreal through to pneumatic structures with an organoid or technoid shape, such as AMO's "Prada Transformer" in Seoul.

What Dutch designer Petra Blaisse, a specialist in textile and landscape design and exhibition architecture who used to run the "Inside Outside" studio founded in Amsterdam in 1991, said when interviewed by Krüger can only be affirmed: "At present, textiles are clearly gaining significance in the field of architecture, and not necessarily just in the field of decoration." 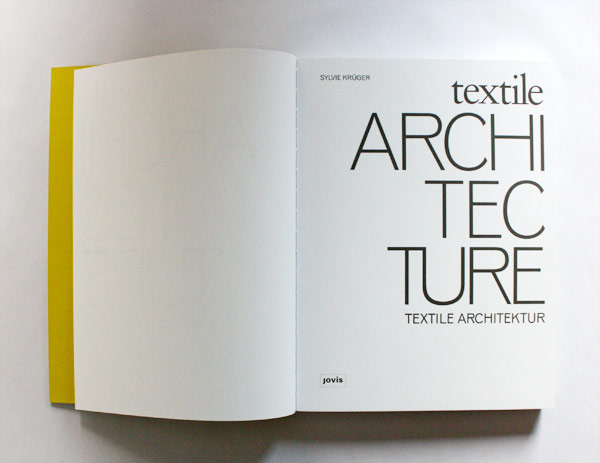 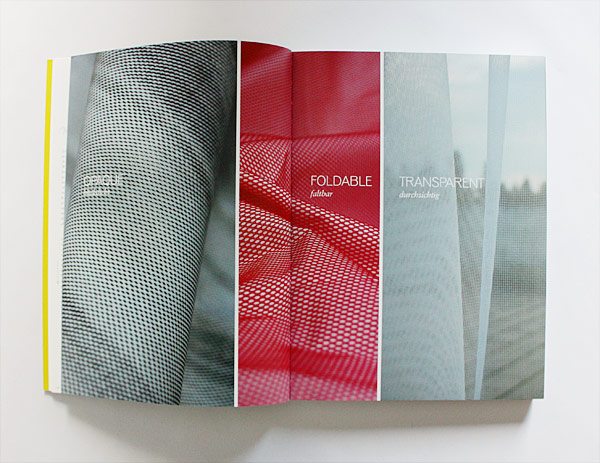 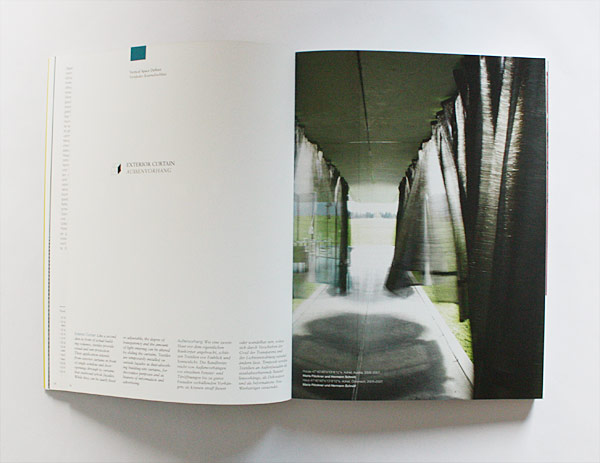 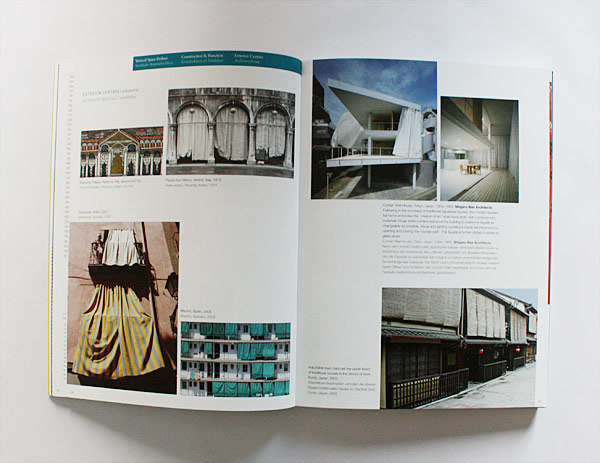 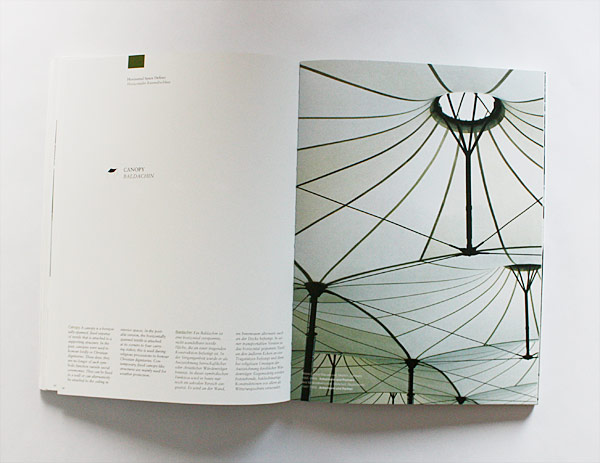 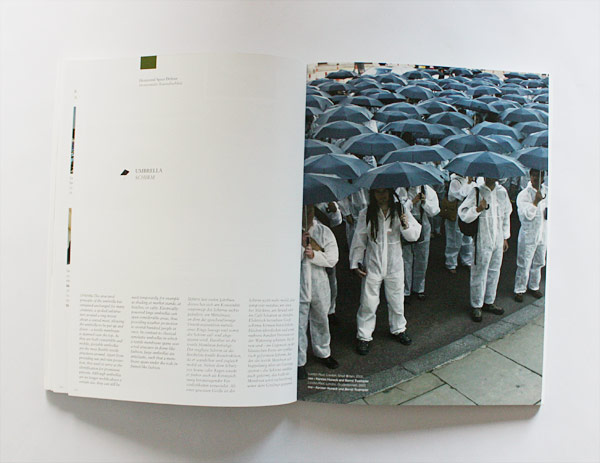 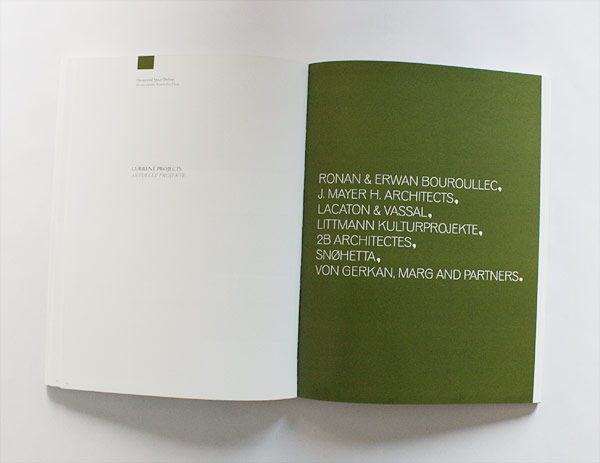 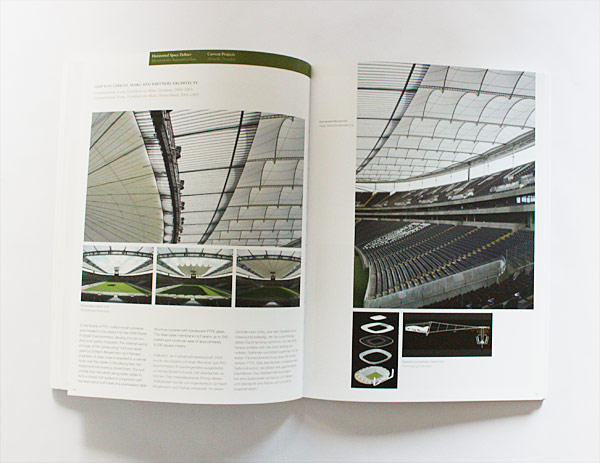 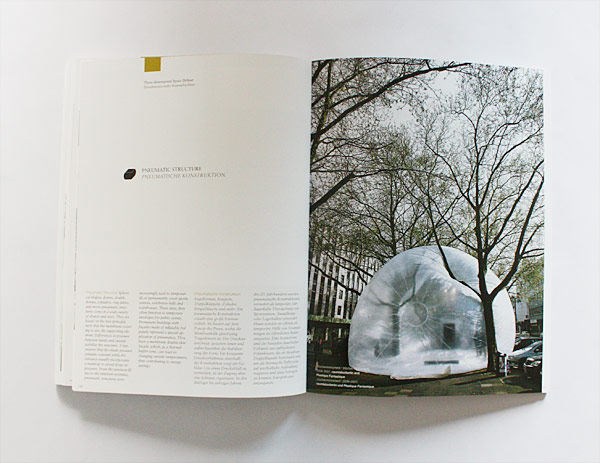 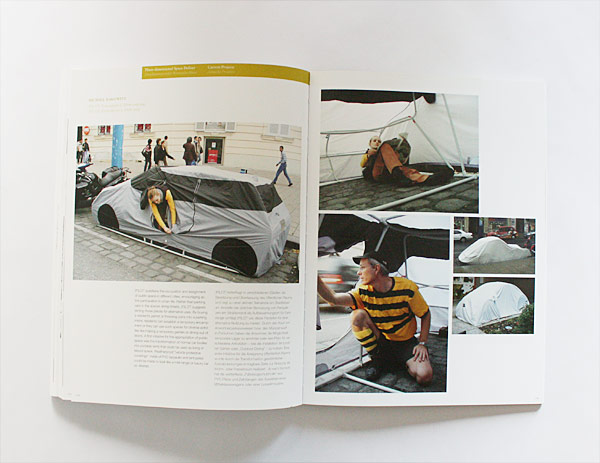