Change instead of master cult

In her book “Schwarzer Rolli, Hornbrille” (Black Turtleneck, Round Glasses) Karin Hartmann highlights various aspects of the architecture profession and examines when, where and why women are at a disadvantage owing to systemic discrimination. In conversation with David Kasparek, the author reveals why these questions must be asked and what gets lost because of this lack of perspectives.
1/25/2023

David Kasparek: With your book “Schwarzer Rolli, Hornbrille” (Black Turtleneck, Round Glasses) you presented the case for a change in planning culture. Was there a special moment for you personally, something that triggered you to think: I have to write this book now?

Karin Hartmann: Yes, there was a trigger: the Covid-19 pandemic. Especially in the early months of the pandemic it became evident how quickly we can forfeit the achievements of equality. And I realized that equality of opportunity is not a linear process but is quickly lost when there’s a crisis. That really shocked me because I believed that progressive developments always advance – and that then also includes equality. But the fact that we experienced such a setback shocked me. The topic had been on my mind for some time and I’d also wanted to counter-gender publications before. During the pandemic I thought it was time to write it down – also because I don’t think this kind of statement had been made in our profession before.

How easy or difficult did you find it to assemble the very broad and well-founded facts and figures from the field of intersectional feminism as they relate to architecture?

Karin Hartmann: I found it relatively easy. From the start I had the feeling that it had to be a book which didn’t go into so much detail but relied on many points to cover a wide range of issues and provide a big picture. Naturally, there is a danger that with such a big picture you might not be equally confident about all the individual points. That is also one reason why I quote many sources for my topics.

The book’s title alludes to the stylish ideal of an architect wearing a black turtle-neck sweater and horn-rimmed glasses. What does this cliché symbolize for you?

Karin Hartmann: I studied in the 1990s and it reminds me quite clearly of “the masters” of Modernist architecture. It is about a code of belonging to architecture and for me – and there are studies to prove this – it is male coded. I can remember how when we started studying, we were all dressed quite differently but from the third semester somehow that changed: There were office jobs where you didn’t wear patterned clothes because it was commented on so it was better to wear monochrome outfits. But you find that in other fields of work, too, it’s not just specific to architecture.

In Germany, more women graduate in architecture than men. But that is not reflected either at management level nor when it comes to owners. Despite a good education and excellent qualifications many women do not see any long-term prospects for themselves as architects in German practices. You demonstrate quite clearly in your book why this is the case: It’s obviously a matter of structural discrimination. If tomorrow you were appointed as a specialist adviser to a council of experts initiated by Federal Chancellor Olaf Scholz and Federal Minister for Housing, Urban Development and Building Klara Geywitz and could propose a change to the current situation what would be your first recommendation?

Karin Hartmann: The foundations for such exclusionary mechanisms that are later systematically reflected in practice are laid in teaching and this is the area where the fastest changes could be made. If teaching were structured in such a way that, for example, there was a re-canonization, the history of architecture was reappraised and female role models were also placed in historical perspective and both male and female professors carried out their work equally to ensure a healthy work-life balance then people would emerge from their studies differently and this would impact on the working culture that is practiced. I don’t know whether it would be a project for Olaf Scholz or for the Federal Minister for Housing, Urban Development and Building, but that is actually where I see the greatest chance (laughs).

For your book you interviewed Afaina de Jong, who among other things co-curated the Dutch contribution to the last Venice architecture biennial and is also a university teacher. She points out that young women lack female role models like BIPoCs or people with a migration background. You studied architecture yourself. What was that like: Were there female professors who made suitable role models and did female architects play a role at all?

Karin Hartmann: Women didn’t play a part as role models because there weren’t really any. I researched it recently and the proportion of female professors was in single digits back then. Moreover, we had the feeling that it made absolutely no difference whether we were men or women. Nonetheless the structural discrimination was effective: There were only male professors, men had the greater say and so on but we were not aware of the structural problems. Looking back, I can say that I wrote a lot of seminar papers about female architects but I only became aware of it recently when I was sorting out my documents.

The suggestion you mention that ultimately men and women only realize architecture and that there was no so thing as female architecture was not only practiced in your studies but can still be encountered today. Yet evidently women have a different perception of certain spaces to that of men, and people from other cultures also have a different view of these spaces. One chapter of your book addresses the question of whether women design differently. What conclusions did you reach?

Karin Hartmann: What is important: Women are not the only ones to be held back because of structural obstacles, it’s also something that affects other marginalized groups. Today, what we find – and this is also reflected in our built environment – is that planners tend to be too blinkered in the perspective they adopt for their architecture. Many other views are missing. A relatively small proportion of our population is responsible for most of the planning that is done. Perhaps we ought to take a wider view and consider the opinions of older people, children, people with special needs, queer persons, and also women. It’s vital that the reality of these people‘s lives is also reflected in architecture. I believe that life is different for every group in the population but that we were always convinced – especially those of us socialized in the 1990s that it would suffice if we simply tried to put ourselves in different situations. Yet its’s extremely difficult to put yourself in someone else’s shoes. It’s much easier to ask the respective people affected. And why not simply let everyone be involved in the planning? Apart from the issue of equality, naturally this profession needs to be accessible to everyone – which it isn’t at the moment. Another problem we have is that people who work in architecture are so incredibly absorbed by certain narratives. There is still a widespread concept of working 24/7 in architecture while no allowance is made for care work.

In other words, taking the time to look after children, relatives in need of care and the like …

Karin Hartmann: Yes, this applies to both men and women. I personally know a lot of women who have abandoned the idea of having children in favor of their job – either consciously or unconsciously. Is that a coincidence? And naturally if you are so absorbed in work there’s a greater tendency to not get to know much about how other people live. Ultimately, it comes down to being a time issue.

”Today, what we find – and this is also reflected in our built environment – is that planners tend to be too blinkered in the perspective they adopt for their architecture.“

Karin Hartmann: I don’t know any comparable figures for Germany. There is a good study by TU Munich “Frauen in der Architektur” (Women in Architecture) which came out in 2018, but to the best of my knowledge it only refers to the situation facing women.

How do you perceive the reactions to your book?

Karin Hartmann: Well, I’m delighted that there have been a considerable number of positive reviews. After being holed up on my own writing, I really appreciate the response of my readers. I didn’t anticipate this whole process while I was writing and it’s only become clear through postings on social media, personal conversations, and reviews that my book appears to have struck a chord. 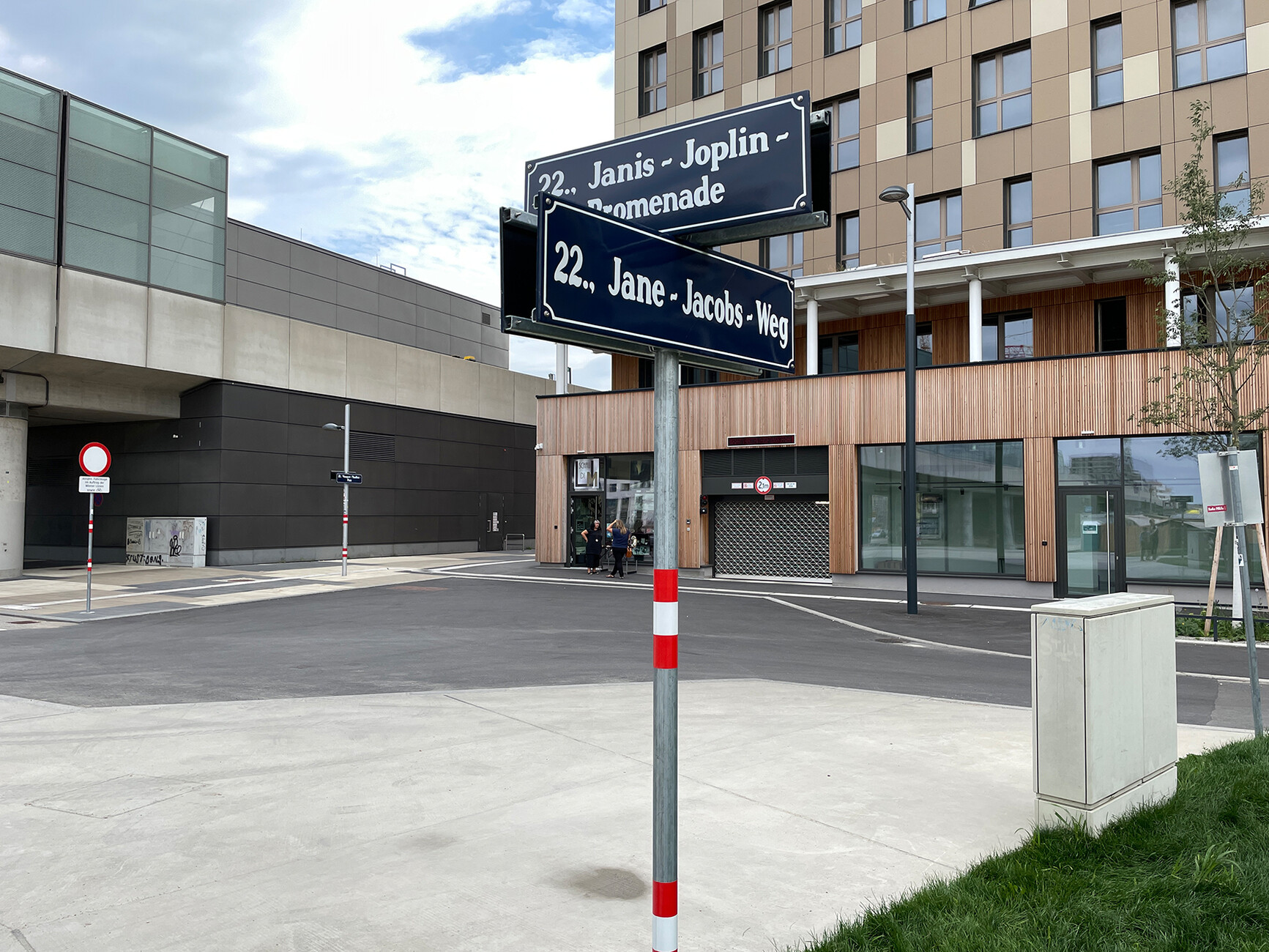 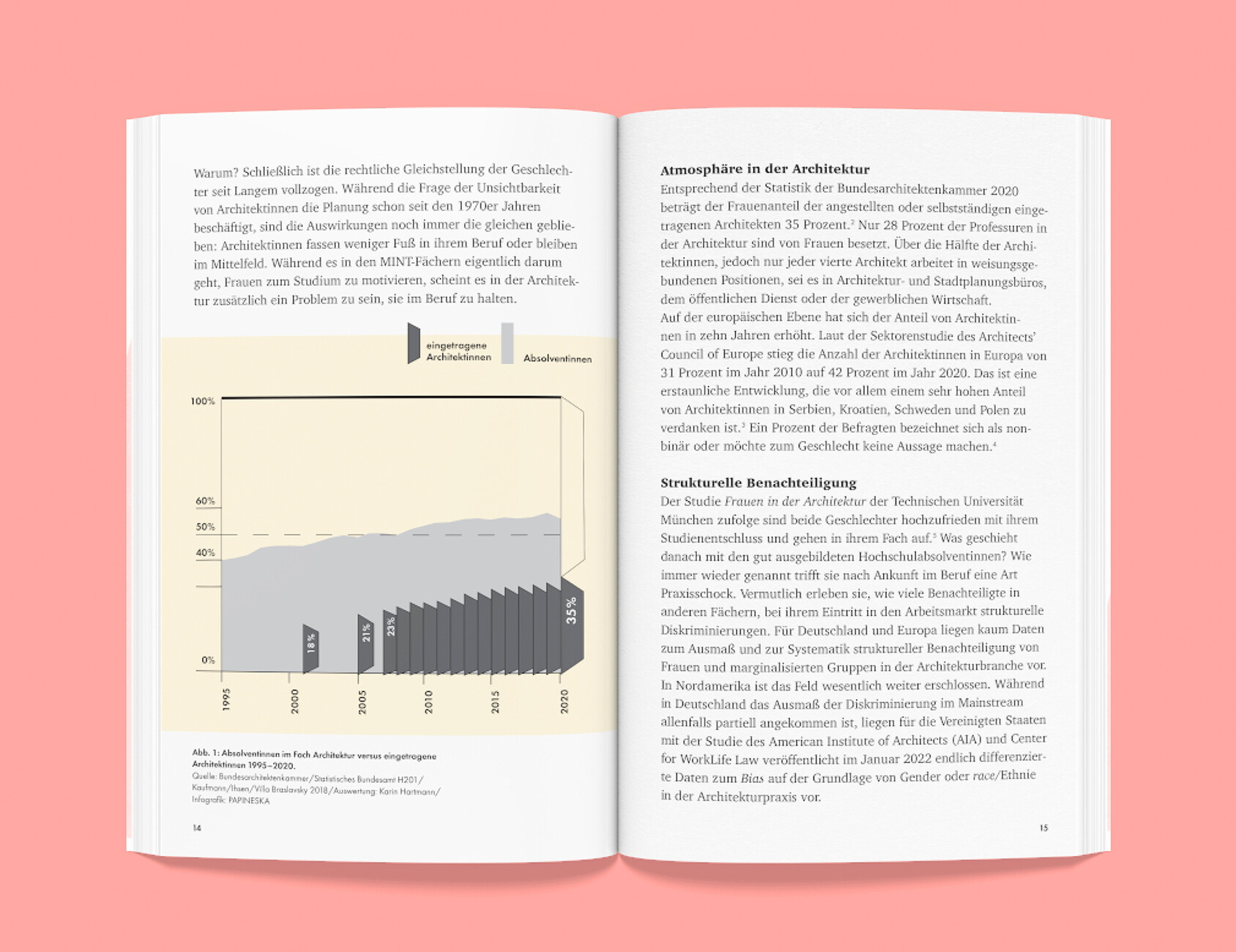 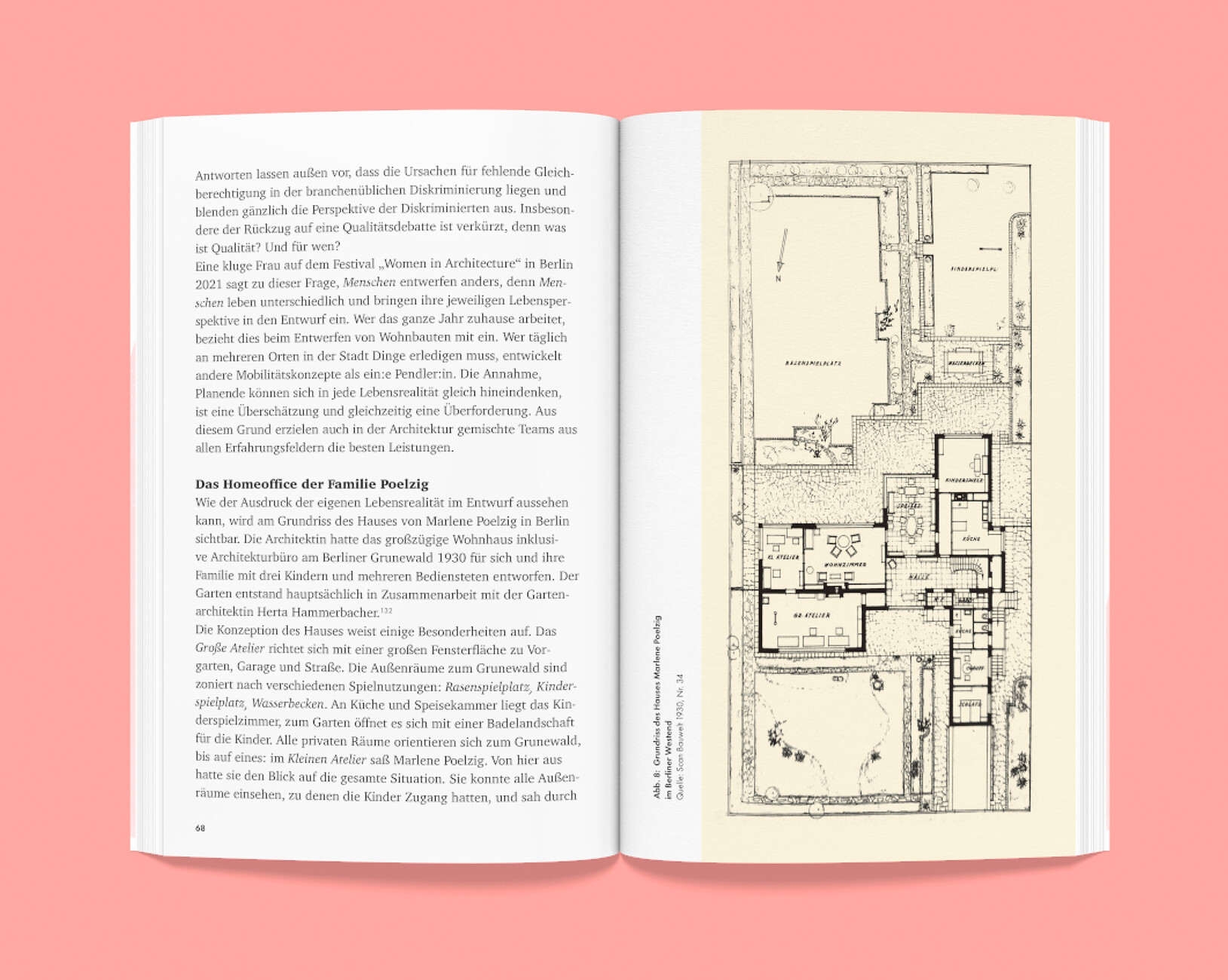 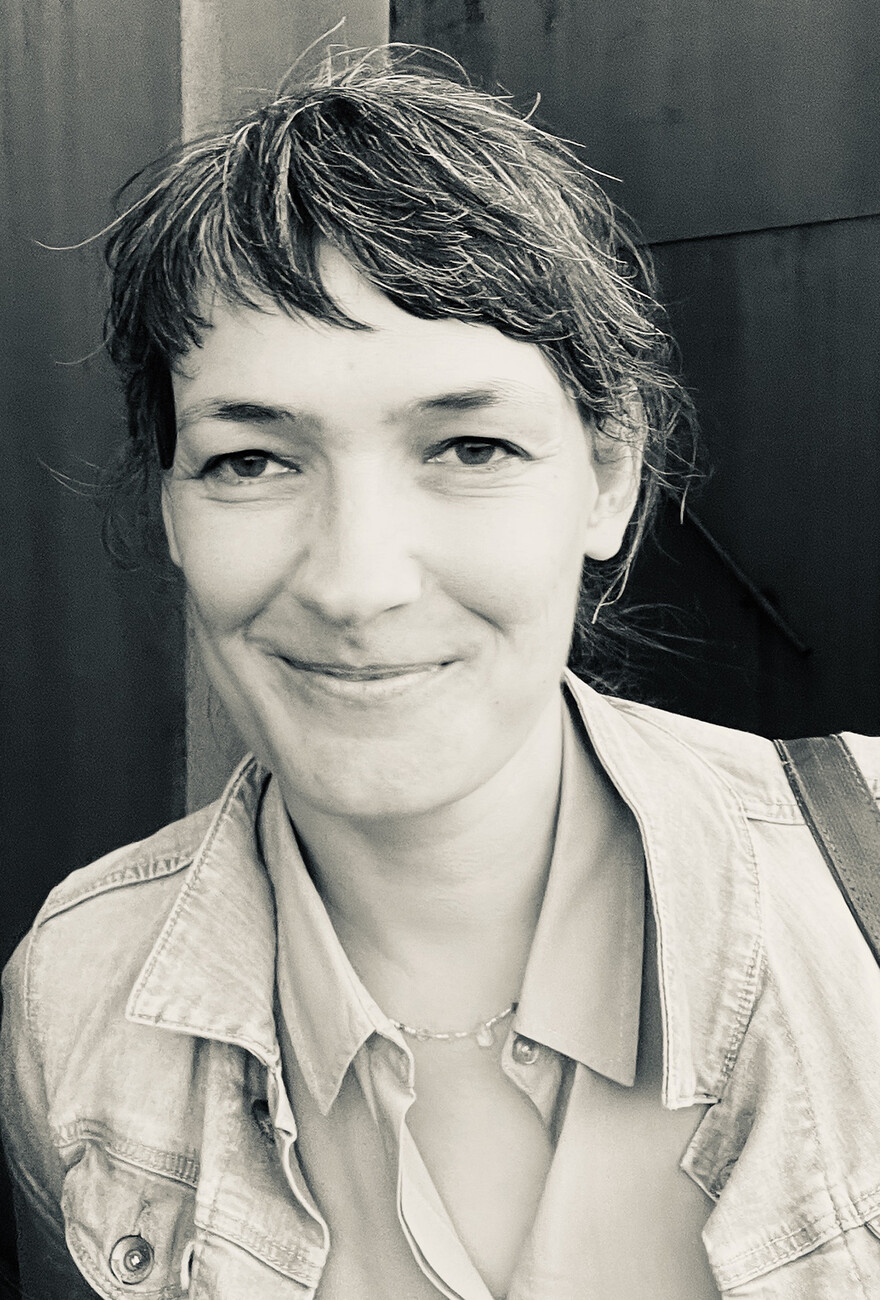 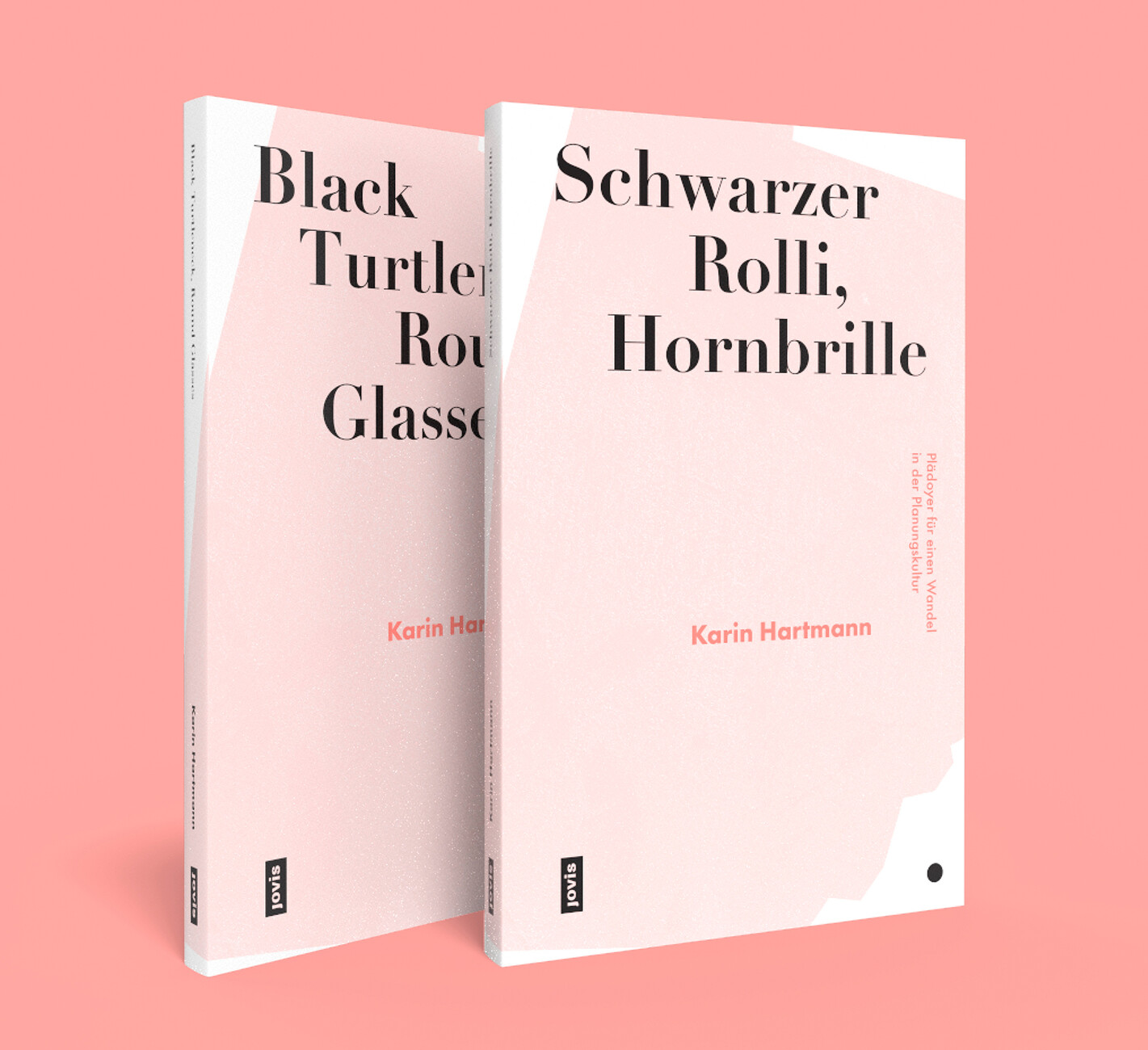 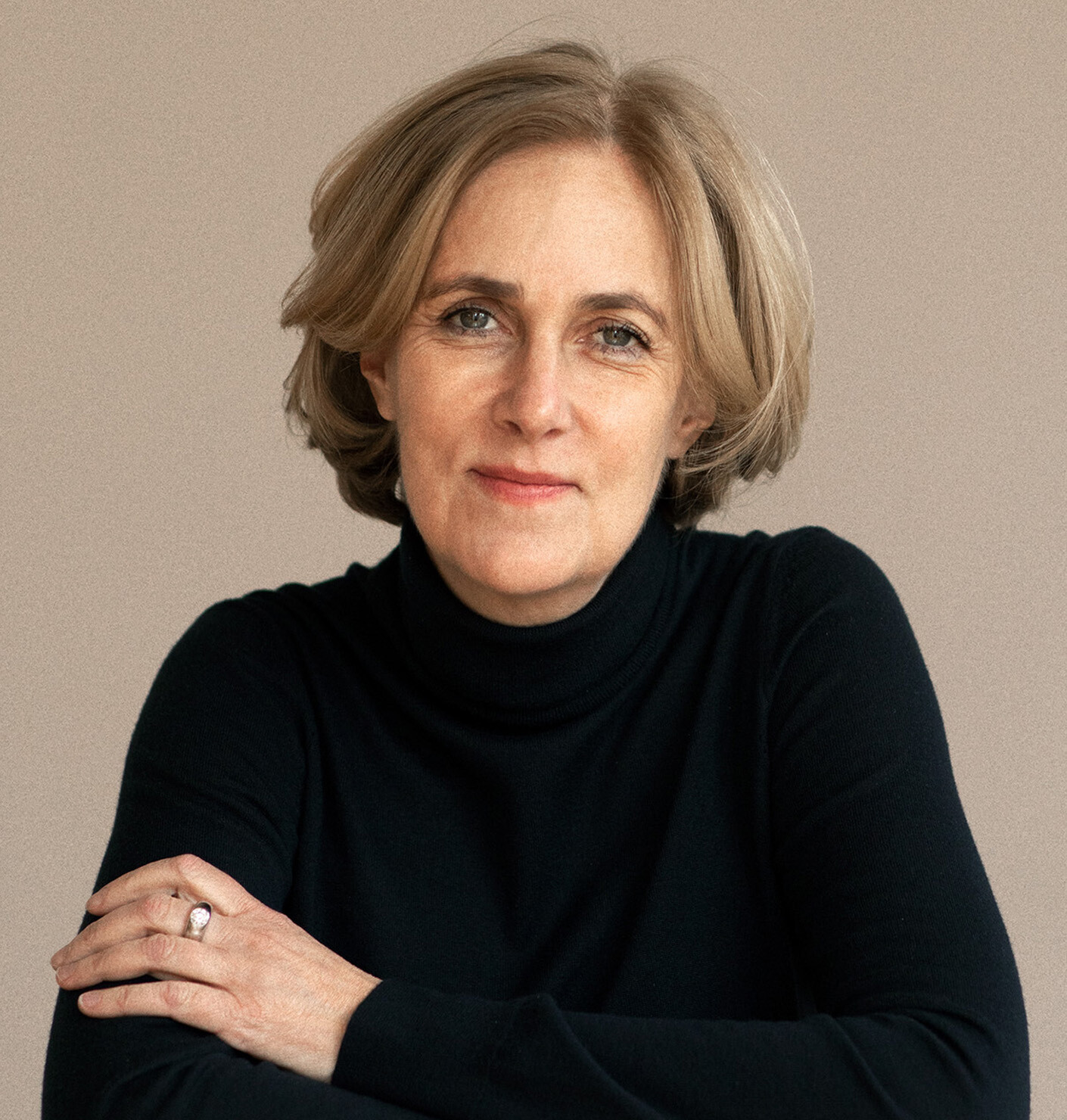 In our series Spotlight on Women Architects we regularly present the work of female architects – such as Regine Leibinger, who uses her special interest in sophisticated load-bearing structures, novel construction methods and materials when designing her extraordinary buildings. 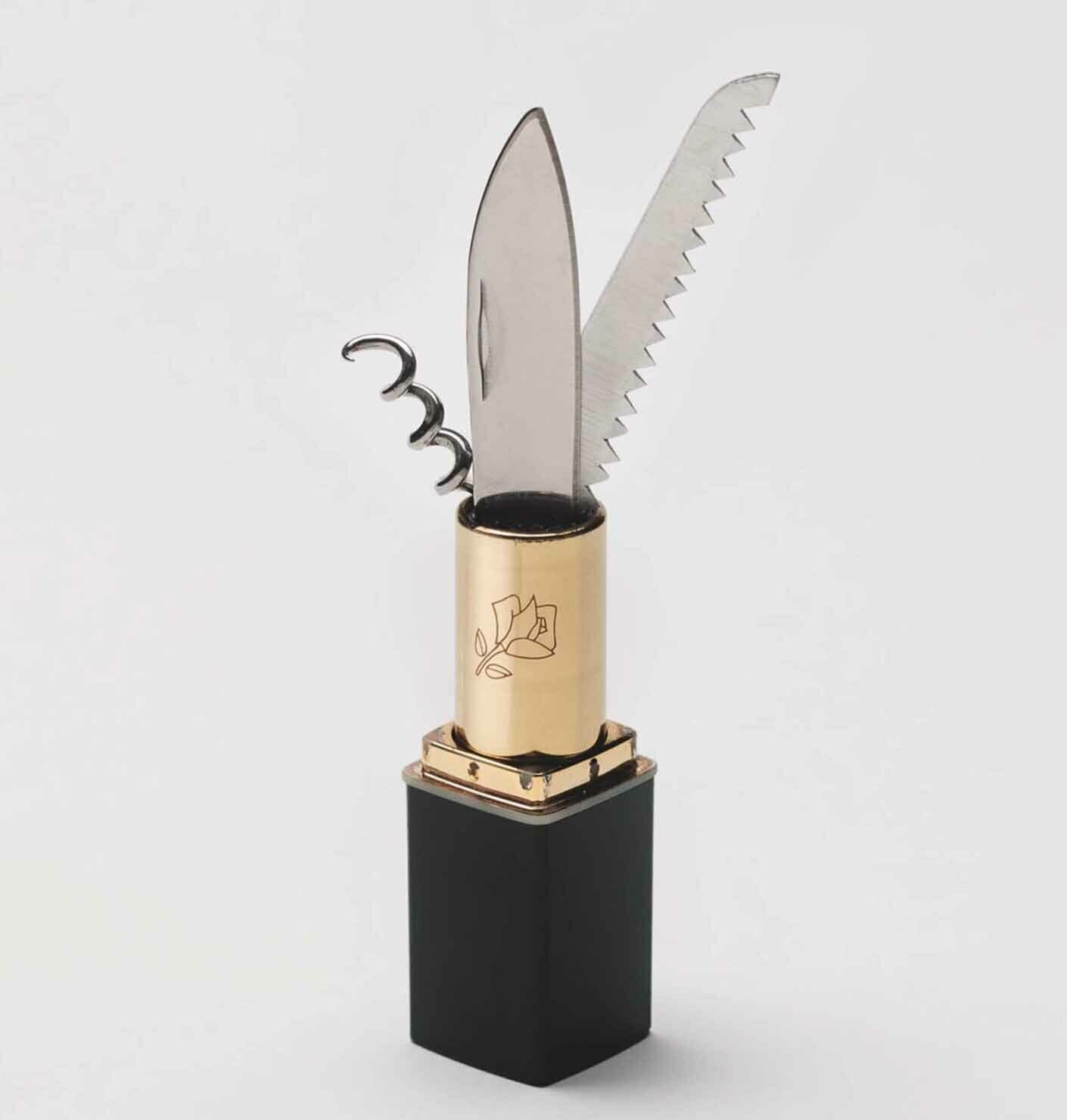 Professor emeritus Dr. Uta Brandes is a design expert, theorist and author as well as the founder and chairwoman of iGDN – the international Gender Design Network e.V. As a pioneer, she has brought the topic of gender and design out of its academic niche. In an interview, she tells us what she feels is still lacking today. 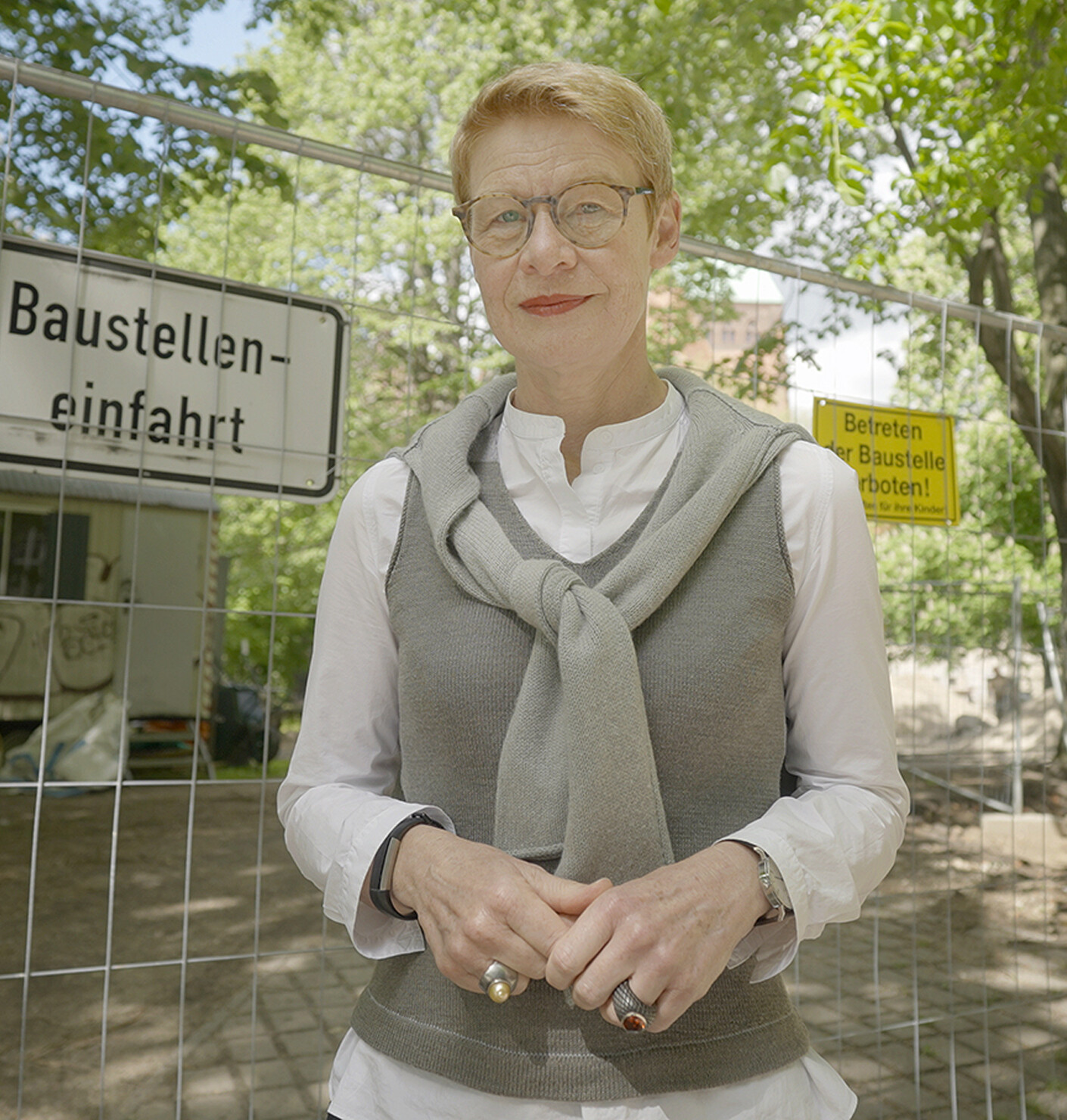 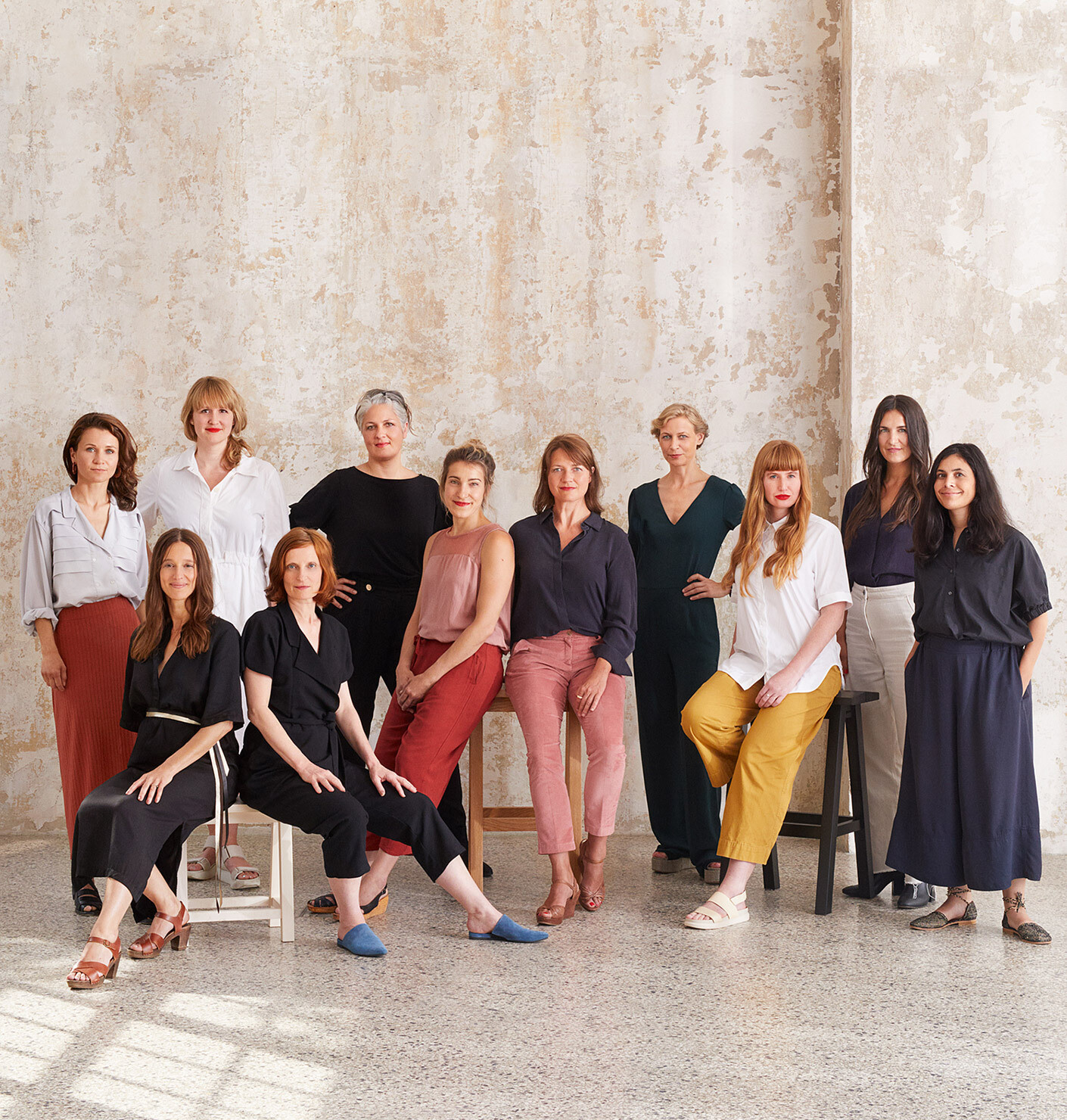 Berlin designer collective Matter of Course exploits the diversity of the group to foster a form of dynamic collaboration that strengthens both shared but also individual positions.
Advertisement