Berlin-based architects Kuehn Malvezzi are presenting compelling alternatives to the boring mainstream of conservative residential construction – with not one, but three projects.
by Fabian Peters | 11/18/2017

“We tried to over-solve the construction problem,” says Wilfried Kuehn, founder and partner of Berlin-based architecture studio Kuehn Malvezzi, “because we didn’t want to provide an answer that would only benefit the developer and no one else – we wanted the general public to profit as well. Otherwise we would be nothing but service providers.” The building project in question involved planning for a large hillside property in Stuttgart’s Relenberg neighborhood, where a property developer from Heidelberg wanted to create upmarket condos. To this end he announced an invitation to tender, asking Kuehn Malvezzi, among other renowned architects, to submit a design – an honor, seeing as the Berlin studio had never realized a larger residential building project before.

The developments surrounding the plot feature vastly different scales: Villas from the late 19th-century Gründerzeit period and 1950s apartment buildings are interspersed with a Brutalist high-rise and various institutional buildings belonging to the University of Stuttgart. Neither a typically urban nor suburban development, as Kuehn explains. This intermediate scale piqued his interest. Which is why the architects took great care to establish the right “grain” for their design. In the end they decided to go with a development featuring detached individual buildings. The architects call this type of building “urban villas,” citing several structures by Leon Krier and the 1984 IBA in Berlin as role models, but also to the way mansions were traditionally constructed. These urban villas constitute a middle ground between peripheral block development and erecting a single structure in the center of the plot, two options explored for the site in question by the other participants in the competition. Kuehn Malvezzi reasoned that free-standing buildings would be able to communicate with the surrounding space in an entirely different way, as well as creating exciting intermediate spaces.

Quality of life over natural stone

Shared intermediate space thus also forms a central element in Kuehn Malvezzi’s design. The architects took the small footpaths winding up the hills in Stuttgart as a starting point for their idea for a path leading through the plot, between their villas: It is not a street, but not landscape, either. Kuehn describes it as an in-between space such as those typically found in Stuttgart: a ‘passage’ space on private property that may be accessed by the public.

The architecture of the villas themselves is to take a backseat in relation to the impact they will have when seen in their urban surroundings. The houses feature simple plastered façades, carefully graded in color, and follow a formal language in which diversity develops from a set of rules – wholly in keeping with the late 19th century. The architects deliberately eschewed any display of splendor, such as the use of natural stone or other expensive materials: Kuehn calls this “prettifying” the structures. Instead they placed the emphasis on creating real added value for the buyer, for example in the shape of large wooden windows and high ceilings. This did not go unnoticed. “A large percentage of the apartments were bought by Stuttgart-based architects,” Kuehn reports. “Of course we see it as a good sign when colleagues from our field acknowledge our work.” The design of the individual apartments is very open. They are conceived in a “filmic” sense, Kuehn says – a sequence of spatial impressions, views through the space and views outwards. For this reason, the loggias protruding into the interiors were especially important to the architects as design features.

While with the Stuttgart villas the architects devised apartment buildings for higher income brackets, their design for a tower block entered in a competition announced by Berlin housing cooperative “Howoge” aims to create affordable living space. The competition called for a single high-rise structure to fill a vacant plot among existing prefabricated housing developments. “The budget for these apartments is about half of what we were able to spend in Relenberg,” Wilfried Kuehn explains. In order to relieve the enormous budgetary pressure, the architects proposed prefabrication and the use of series components – with the side effect that money could be saved through shorter construction periods, too. They suggest using a hybrid construction method with wood and cement. In addition, the structure of the building is designed to make it possible to gut and upgrade the tower block after its operating life has ended.

In the end, Kuehn Malvezzi’s design came third in the competition – which shows that the building cooperatives are finally open to new approaches, too. “None of what was created in cooperative residential construction in the 1960s and 1970s is worth using as a starting point for today’s designs,” Kuehn believes. “We have to go further back, to the approaches of the early Modern Age.” He considers it high time to dare to take experimental approaches and to remember pioneering proposals – such as the use of different ceiling heights or greatly restricting the size of bedrooms in favor of larger living rooms. Unfortunately, many housing associations tend towards conservative solutions, notes Kuehn, something he laments. Unconventional designs are thus always a balancing act for the architect, he says.

Kuehn Malvezzi are currently working on refining their design for a further large-scale residential construction project. In 2015 the architects won an investor competition in Baden-Baden together with the property developer of the Relenberg project. It involves developing a former complex of regional public broadcasting corporation Südwestrundfunk in the town. Even though they did not submit the highest bid, Kuehn Malvezzi’s design wowed the jury and the team was awarded the contract. The design for Baden-Baden constitutes the midway point between the urban villas in Stuttgart and the tower block for Berlin in two respects. First, the majority of the almost 20 individual buildings planned share features with both the urban villa and the high-rise. Second, living space for three different target groups is being created here, from affluent to lower income segments of the population. What immediately catches the eye is that 13 of these buildings have a pentagonal floorplan. This shape enables the architects to include five apartments on every floor which nevertheless catch the sun from several sides. And because the buildings are not arranged along the edge of a street, as in the Stuttgart project, the layouts may be rotated and mirrored almost any which way, creating interesting perspectives. Here Kuehn Malvezzi are working with staggered stories as an additional design element, in relation to the animated topography of the surroundings. The development plan for the project is currently being drawn up, to be followed by the start of construction. So watch this space! 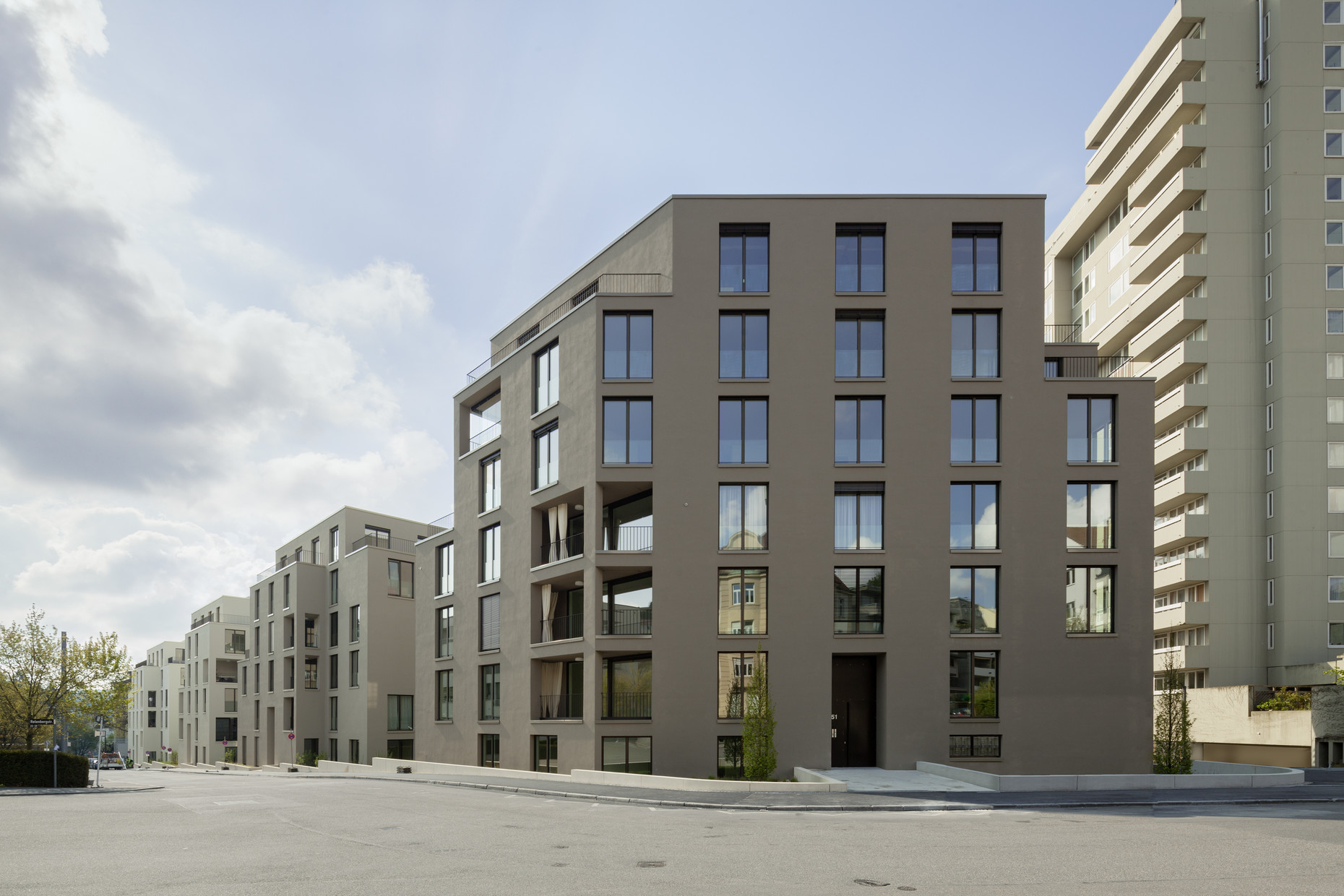 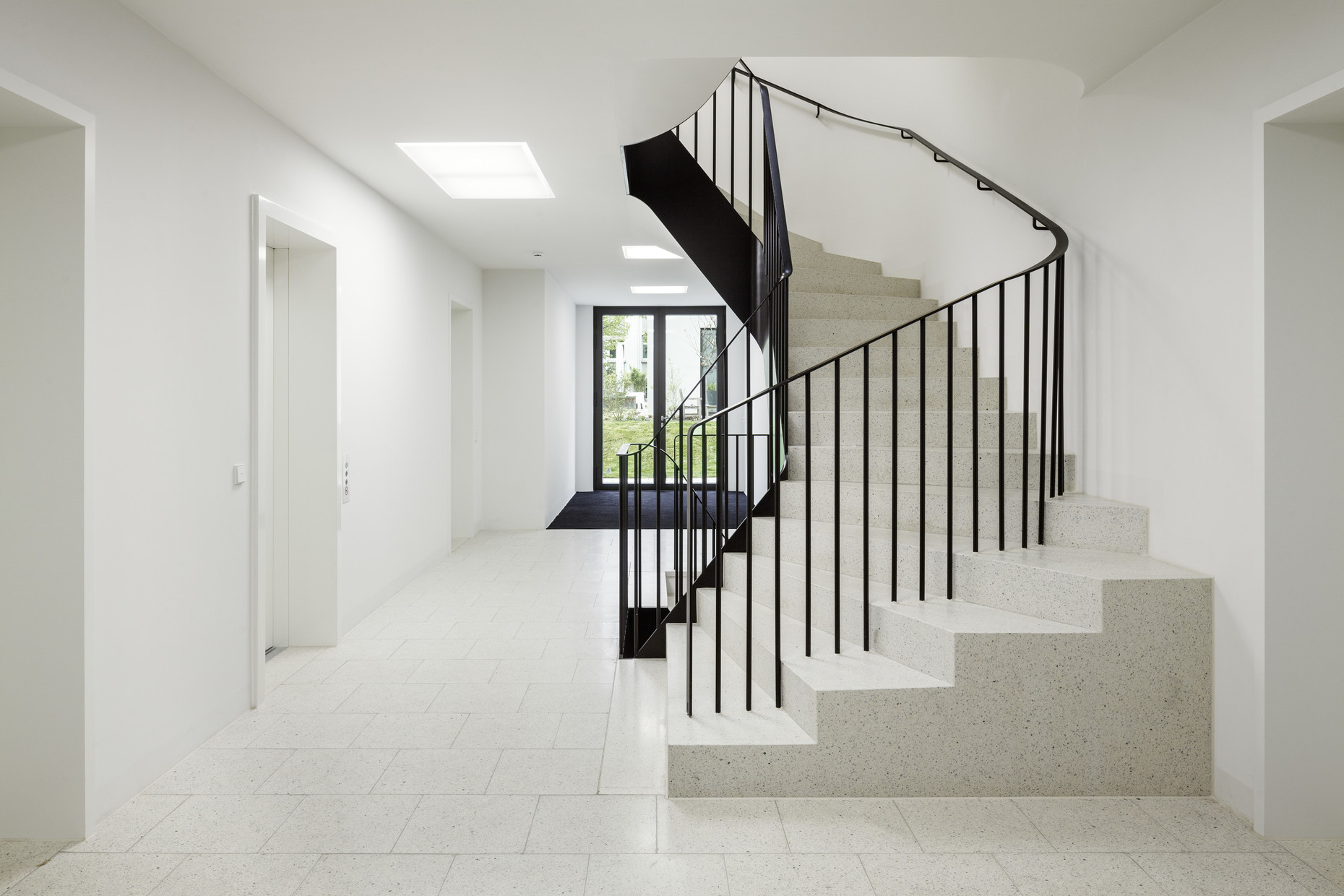 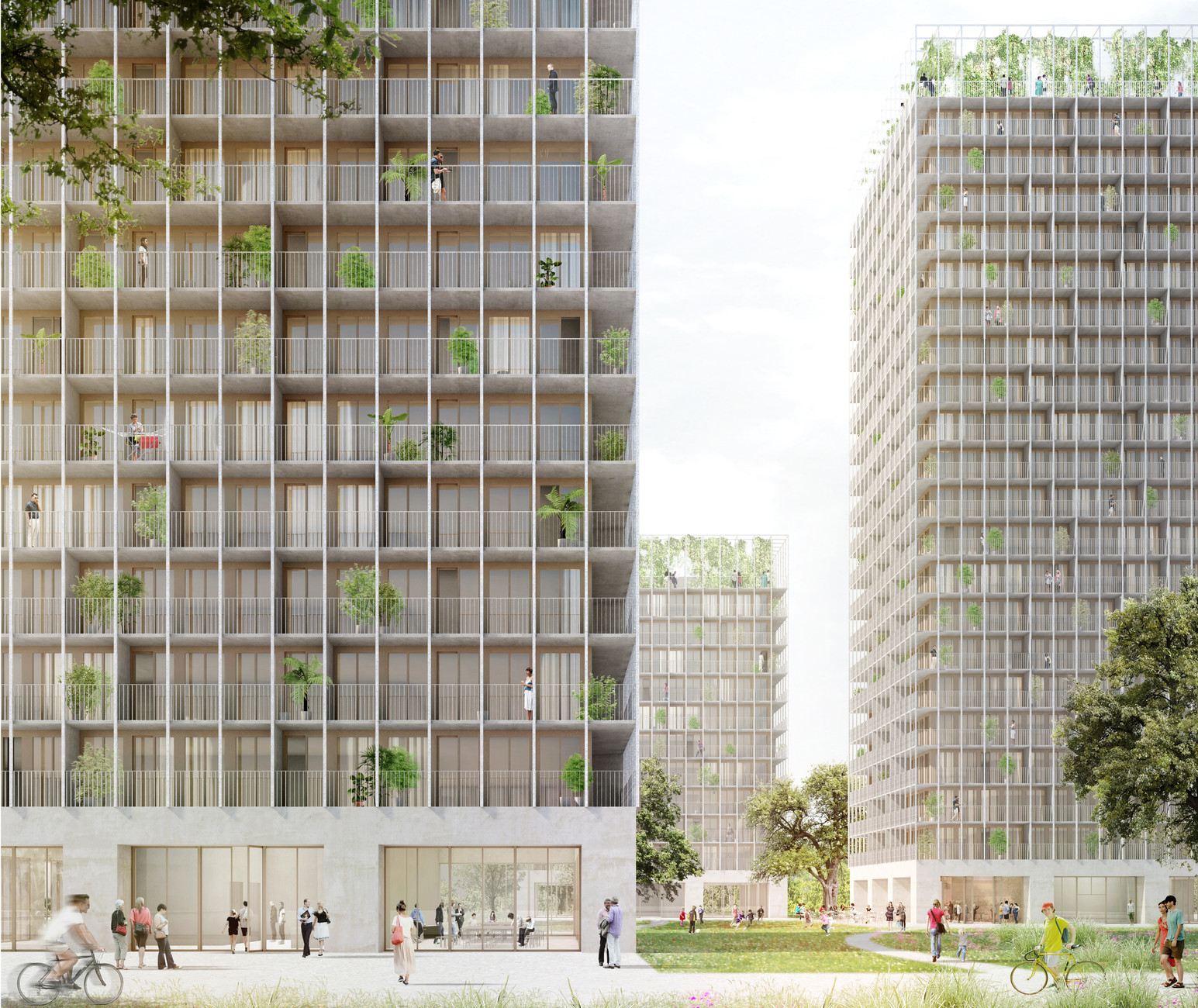 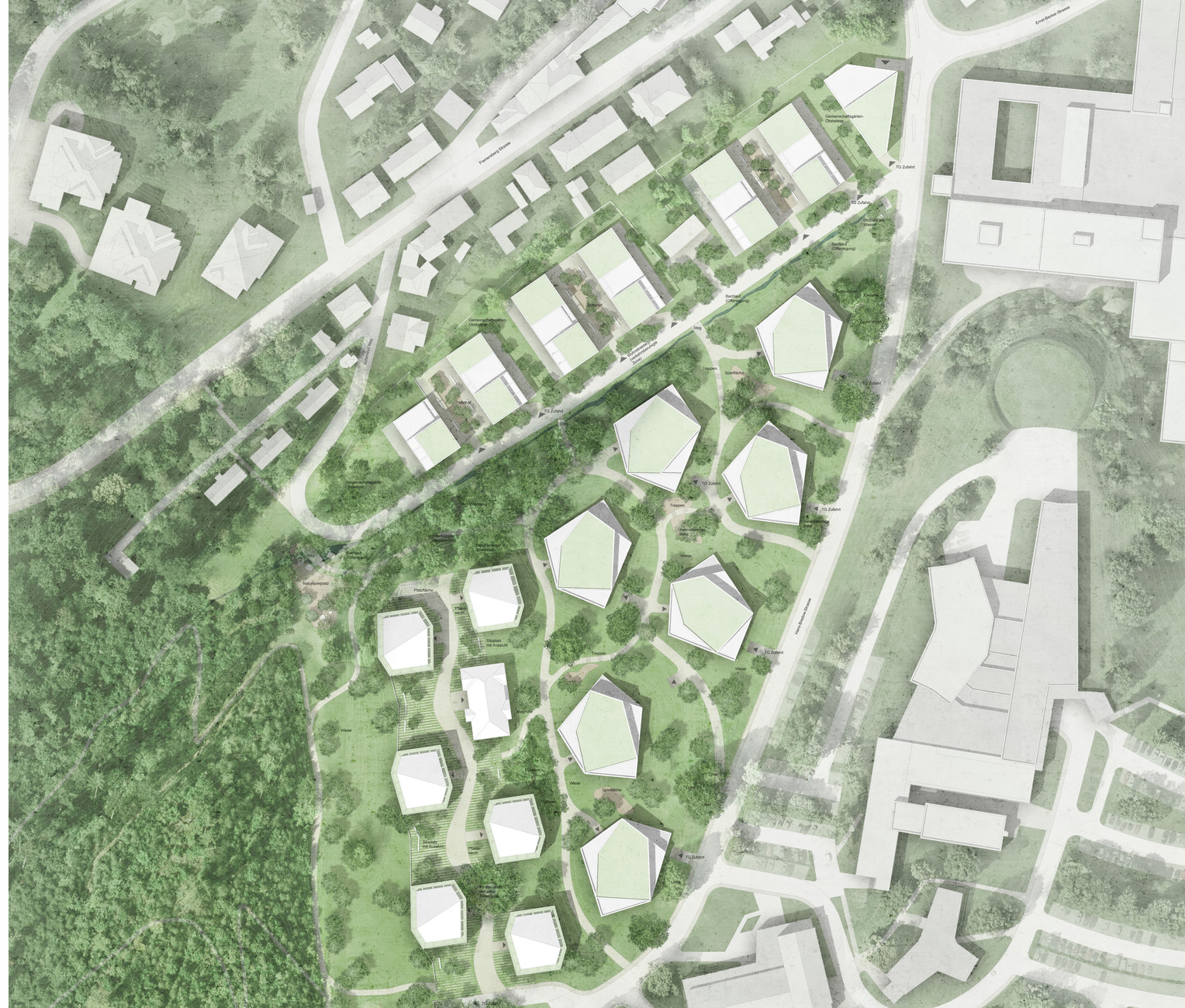 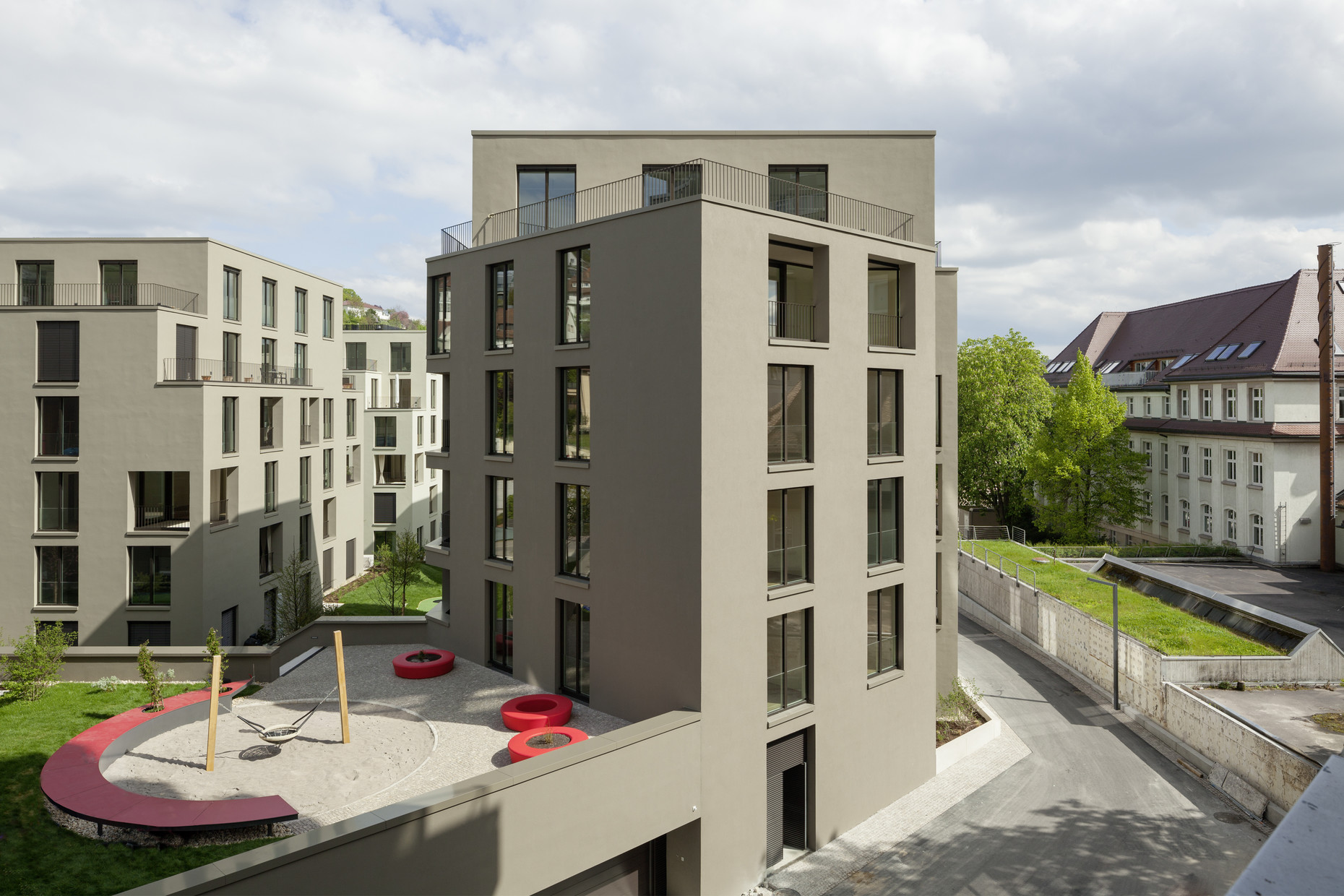 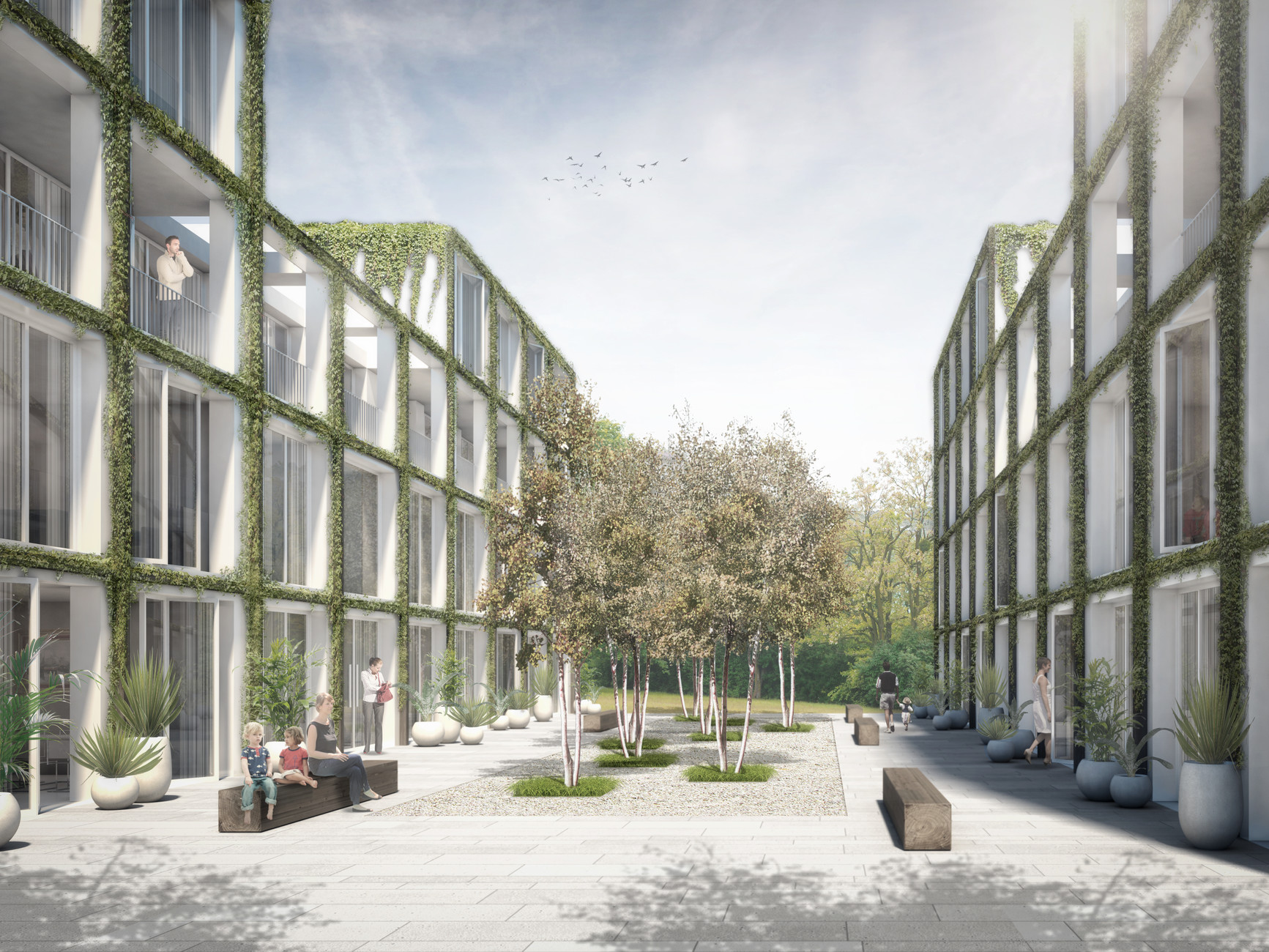 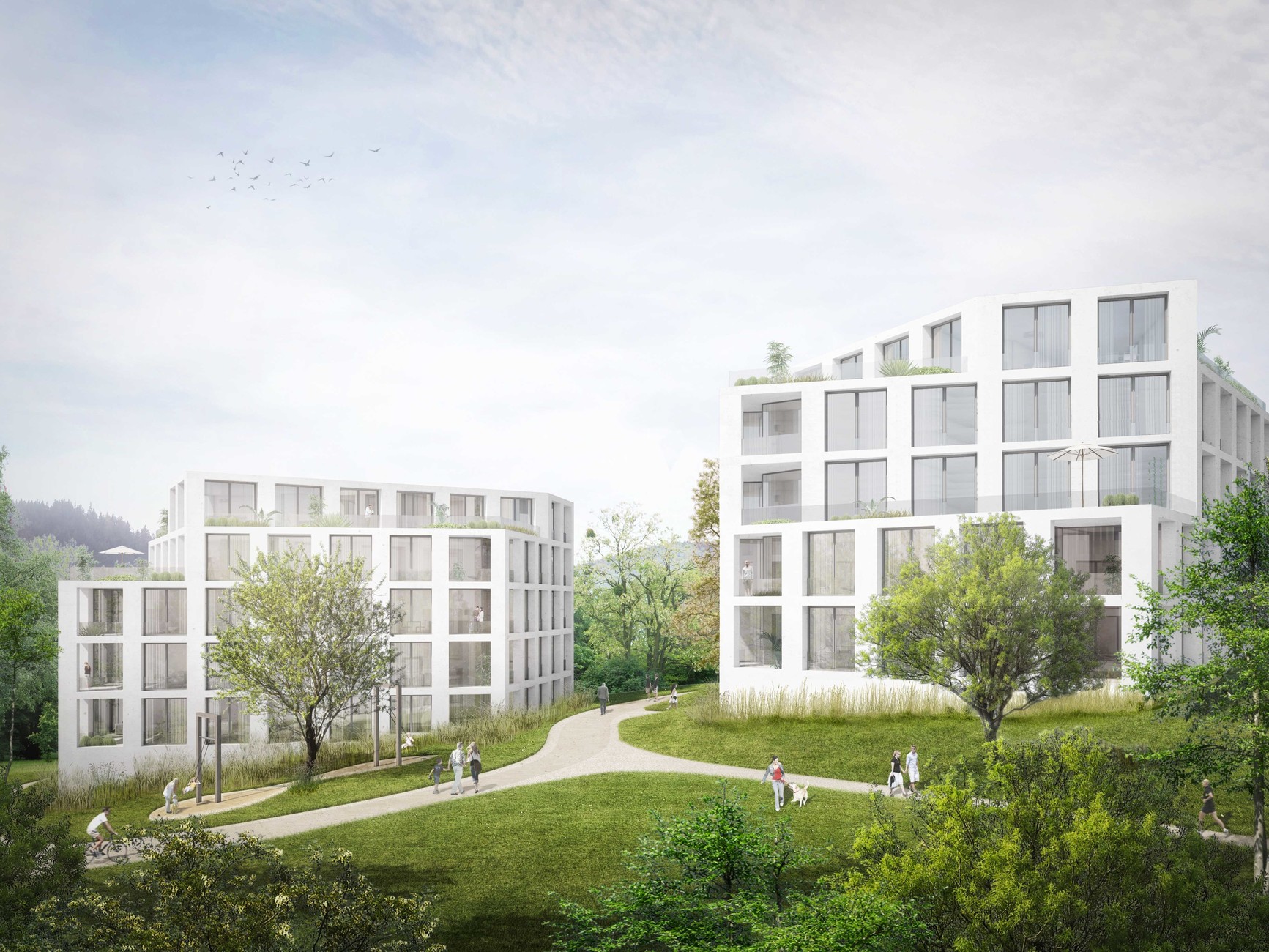