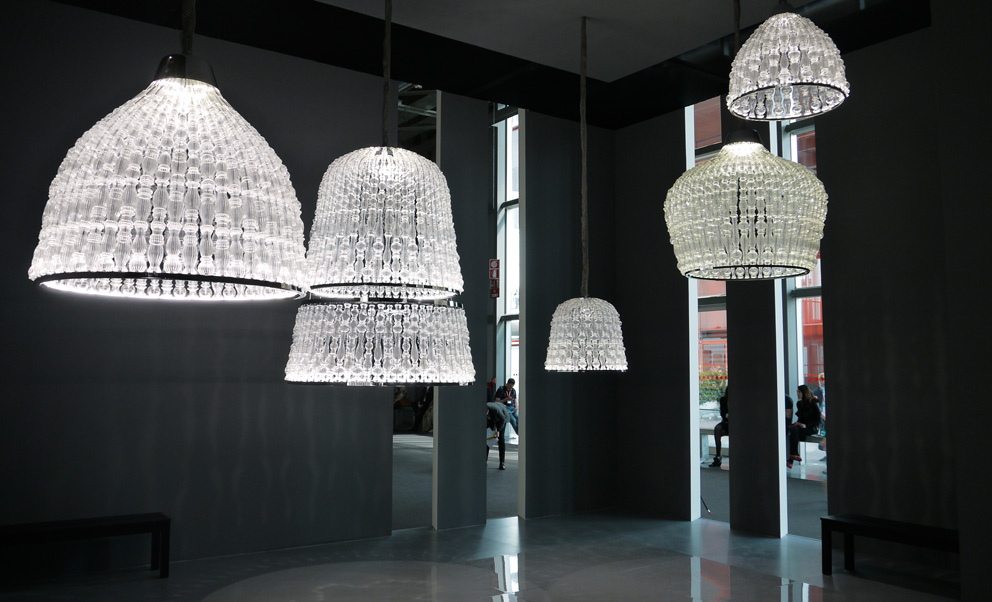 Compared to the countless furniture events at the Rho trade-fair complex and at the Fuorisaloni, which call for extensive trips round Milan, the topic of light seems to be a very concentrated affair. The Euroluce with its 475 exhibitors spread across 38,000 square meters of exhibition space are located in just four halls (9/11 and 13/15), of which two pairs are linked directly to each other. Here the principles are the same as for hotels on perfect beaches. The closer a booth is to the trade fair’s “Corso Italia Ovest” boulevard, the larger it was and the more important the offerings. And the willingness to nurture a form of design that allow substantive or technological innovations even for decorative luminaires, ideas that go beyond just styling, was also in evidence here and there. Yet the more remote the booths in the hall, the stranger the mixture of goods and presentations. And only a few exceptions confirmed this rule.

In actual fact, light gleamed wherever anything was on display, presented and staged – be it as an object or as a means to an end. Astonishing visitors to the “Favilla” Installation by Attilio Stocchi at Piazza San Fidele, who wanted to explore the walk-through “Black Box” downtown on the occasion of UNESCO’s “Year of Light”. It was likewise in evidence in Tom Dixon’s place-to-be, his event venue with its trendy shabby look, originally designed in 1933-7 by Rationalist architect Mario Cereghini for the Italian fascist youth organization “Balilla”. Presented to visitors as a “former school building” light really set the mood, for example the “Melt” luminaires designed by Sweden’s Front group in collaboration with Tom Dixon. In the former movie theater in the building they conjured up a dim-but-dazzling club atmosphere. Like all his novelties, they were not presented as “prototypes on a plinth”, but, as Dixon explained, as objects available with immediate effect from retailers. Anyone spontaneously wishing to buy could order the accessories, furniture and precisely the luminaires and have them delivered free of charge within Europe.

Manufacturers of technical lamps have long since adapted new lighting technologies to their own needs, adjusting their product lines and exploiting the potential of improved LEDs. The producers of decorative luminaires, traditionally the strong majority in Milan, have made less headway. In many cases, a lot of effort is required to adapt their products, some of which are icons of design history, replacing the traditional bulbs or halogen lamps with the gleam of LEDs. Such open-heart surgery is not always successful. For example, at last year’s fair products by Flos seemed to be uncertain in which direction they should head.

How different things are at this year’s Euroluce, where designer Ron Gilad gave the 1,000 square meters of the booth the look of a “White Cube” worthy of any good art museum. The luminaires not only provided perfect vision, but were the object of desire too. By contrast, the corporate logo was toned down, located in the center above a cave-like entrance. Gilad had the customary display cases and boxes give way to one flowing space. Only the busy mood, the sound levels and heat (all swiftly felt) made it clear that you were definitely not in a museum but in the midst of a trade fair. It was also noticeable that Investindustrial, which has since 2014 been the new majority owner, has enabled CEO Piero Gandini to continue realizing his visions.

Jasper Morrison’s standard lamp, “Superloon”, is one of the new products that show this all too clearly: It makes use of ring-shaped LED side lighting and is not the only product to do so. Artemide relies on a comparable technology and under the name of “Discovery” has launched an entire luminaire line, designed by CEO Ernesto Gismondi. The theme could be described as being dematerialization, as the thin acrylic panes remain transparent even when the light is turned off. If the LEDs hidden away at the side are activated, the pane serves to diffuse the light. Unlike other manufacturers, Morrison has found a unique way to deploy this principle – his large LED light pane has especially thin edges. Placed on a stable and yet graceful tripod-like frame, the gyroscopic connector means the luminaire can be adjusted through the full 360 degrees, added to which its warm toned light can be dimmed at will. Depending on the setting, it can serve as the main source of light in the room or simply be used to create highlights. “Superloon” proves to be a minimalist and worthy successor to those standard lamps with their shades that Spanish/Italian artist Mariano Fortuny designed in 1907 and Palluco has marketed under his name since the 1980s. At the trade fair, Flos presented many other new lines, some of which become elements of the architecture. Then there’s Patricia Urquiola’s “Serena”, a pendant, standing and table lamp with reflectors, available among others in gold, copper and aluminum. Brothers Ronan and Erwan Bouroullec presented their “Luce Verticale”, a pendant LED luminaire that is basically unlimited in length and boasts hand-blown glass dishes.

Manufacturers such as Italamp, Barovier & Toso or Lasvit stood for a different kind of lighting. They outfit private luxury properties, huge hotel lobbies and fashion stores – with spectacular objects that are in part one-offs purpose-made for the specific location in question. That said, the ranges include mass-made contract products. At Italamp, for his expansive bell-shaped luminaire called “Crowns” Marco Piva has drawn on a centuries-old tradition of blowing glass, combining it with current LED technology. For Barovier & Toso, a long-standing company based in Murano with roots that date back as far as 1295, Marcel Wanders dreamed up the “Perseus” luminaire, which is, as he says, a “mixture of movement and explosive arrangement”, its colored glass sections in the lineage of candelabras but with a new twist. Something similar is achieved by the brothers Fernando and Humberto Campana of Czech company Lasvit. The center of the booth boasted a stunning interactive light-and-glass installation called “Supernova” by Petra Krausova. It consists of transparent glass elements that rose or fell depending on how visitors participated.
The “Candy” luminaire created by the Campana brothers is colorful, and a bit unsettling, reminiscent of the Brazilian sweets they both enjoyed as kids. And like the role model, “Candy” is seductive, consciously superficial in look, and not entirely without visual side-effects for any private ambience.

Back from formal experiments to innovations and technology as well as applications for the comparatively normal spheres of private homes: Luceplan once again proved it relies on a great mixture of fantasy and inventive spirit. For example, the “Mesh” luminaire it presented, with Francisco Gomez Paz continuing his search for a new face for LED lighting. “Mesh” consists of many networked LEDs that can be controlled individually or in groups. An app for your smartphone or tablet is destined to provide playful or highly accurate control of the light. “Cappuccina” by Inga Sempé, by contrast, varies the topic of adjustable lamp shades on an opaque LED light source in a quite pragmatic vein: The decorative covers of the respective shades are of special significance here. With her perfectly calibrated “Soleil-noir” luminaire, Odile Decq references Charles Trenet’s renowned 1930s chanson “Le Soleil et la lune”, which has remained highly popular in France to this day. The LED light source is covered by a pane that sets the respective mood. Daniel Rybakken has downscaled the candelabra. With “Stochastic” he eschews the traditionally symmetrical candelabra and instead opts for a seemingly randomly-generated form of light dispersion. An LED light source is concealed in the middle of a bundle of mirrored or opaque glass spheres, radiating warm light upward and downward.

The oeuvre of artist Bernard Schottlander is back in the limelight. Born in 1924 in Mainz, he had to emigrate to Leeds in 1939, first working as a welder, then a sculptor. His efforts as a designer – presented in 2007, eight years after his death, in a retrospective at the Henry Moore Institute – include a series of luminaires that DCW has now made available as re-editions called “Mantis”, with new versions added this year. “Mantis” is also reminiscent of designs by Serge Mouille made several years later.

Color reproduction is the key

Ingo Maurer and Mario Nanni show their skills when shunting for a functional and yet playful approach to light. This year, Mauer has to forgo installations at Spazio Krizia, as the fashion firm’s showroom is currently closed for modernization. He therefore only displayed novelties and new variations of his products at the trade fair proper. Impressive: his “Oh LED One”, the first mass-produced OLED table lamp with a guaranteed service life of 15,000 hours and modules made by LG Chem and with a price-tag of less than 1,000 euros. For such a product unusual in terms of both durability and cost. Be it as a desk or a standard lamp, “Bastardo” by Ingo Maurer with Bernd Dessecker or the new “What We Do Counts” comic luminaire, both use LEDs that, key for Maurer, provide especially high-grade color reproduction. What quality you get on the CRI (Color Resolution Index) is not some minor thing.

Yet most luminaire makers seem to be happy to just achieve a minimum rating of 80 (which is an 80 percent approximation of daylight); Maurer and a few others want to achieve at least 90 percent, and actually often score even higher. Among their number is Italian light poet and itinerant inventor Mario Nanni. In the spacious showroom of his Viabizzuno company at Via Solferino on the occasion of the Euroluce he presents a new lighting fitting with a modular structure called “n55”. It is made up of a ventilation element, a standalone fan and a replaceable LED unit that achieves a CRI figure of 98 and boasts optimized red tones. The third element in the “n55” are exchangeable glass bodies in different shapes and sizes, designed among others by Mario Nanni, David Chipperfield, Kengo Kuma, Winy Maas and Peter Zumthor. These successors to the good old light bulb still seem very bulky, but Nanni is busy working on this, too, we assume. “Saving energy with poor-quality light is simple,” he quips and insists that it is now time to save energy but deliver great light quality. The illumination in the high-end Milan shopping street Via Montenapoleone was never as poor as now, he complains. “The light is far too green.” Lamps with a higher CRI value could help save the day. As his personal contribution to the Expo he is presenting his “Solis Silos” – huge, walk-through steel structures that capture light and comprehensively document its elementary significance for the world of nutrition. Light as a descendant of ire: Mario Nanni makes sure we can experience it with all our senses. 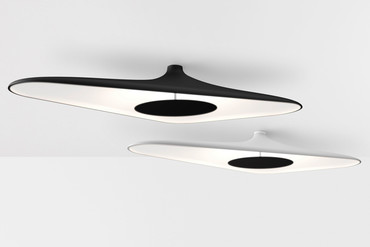 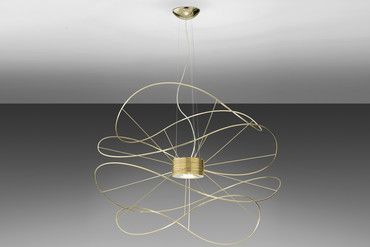 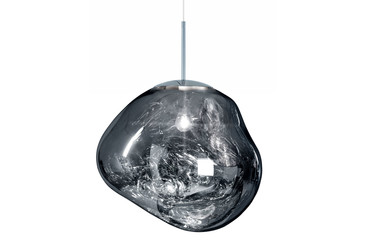 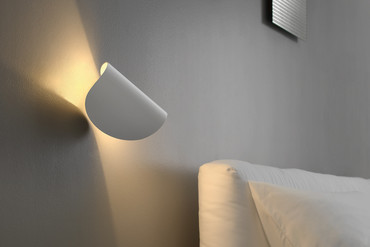 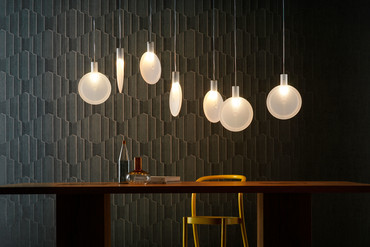 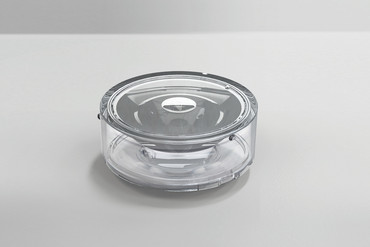 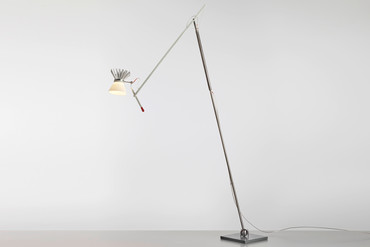 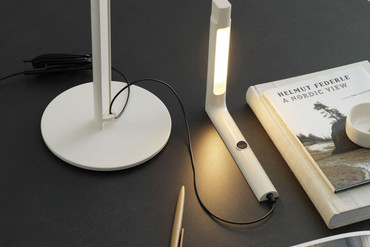 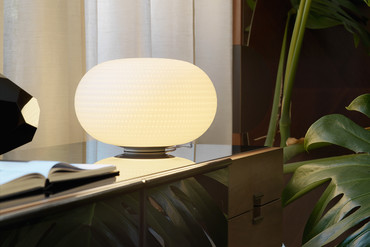