Can there be anything more stylish than a proper siesta - at least in the countries on the Mediterranean rim. A little nap to follow a good lunch. The turbulent events of the day come to a halt, entire cities doze off. Depending on your preference you may opt for a wicker recliner in the garden, idyllically under fruit trees, surrounded by herbs and flower bushes, blink for a moment at the sun and listen to the birds cheeping while you fall asleep. Others prefer to snuggle up on a sofa in the shade of indoors, enjoying the many cushions and a thin cotton sheet, with nothing to be heard bar the slight hum of the ceiling fan. At the latest one or two hours later everyone gets back up, goes back to work, the cities wake up again, and the day starts for a second time.

Siesta, doze, power nap, beauty sleep - there are many euphemisms for sleeping during the day. In Southern Europe, the United States and the Far East, for example in China and Japan, napping is definitely approved of. Sadly, that is not the case everywhere - in many regions, and they include Germany, a midday nap is not just not accepted, it is frowned upon. It is only accepted here for children, the infirm and the aged. Among the working population, it is considered a sign of weakness to sleep during the day. But why should the healthy, strong high-performers not recharge their batteries? Countries such as Italy, France and Spain show us how, and scientifically it has long since been proven that a rest in the early afternoon boosts our performance thereafter. The body relaxes, the mind is freed up, and perhaps the sleeper is also energized by the one or other dream.

The working part of the population need not necessarily go home to siesta. Some companies and public administrations have actually established rest zones in offices, and there is a broad range of in part highly sculptural and yet very comfy recliners available to populate these. In an astonishing number of these loungers, the form traces a curved line that resembles the ostensibly most comfortable position for the body of an average-sized person when lying on their back - to the extent that they do not prefer to sleep on their side or stomach. Best known is no doubt Le Corbusier's "LC4" recliner, followed by classics such as Poul Kjaerholm's "PK24" and more recent designs such as Maarten van Severen's "LL04". Some of these recliners can be set at two different angles, meaning you can switch between a sitting and a lying position; one example is the "MvS Chaise", assuming you are confident that you will not fall off when you re-adjust the position. That said, there are countless recliners with a flat surface and a more or less adjustable rest, such as Hans Wegner's "PP 524" or Piero Lissoni's "Club". Formally speaking, they may seem less interesting that the curvaceous chaise longues, but they are very comfortable for especially small or large people, and allow for a greater diversity of reclining postures. Interestingly enough, some of the products are castor-based, the most prominent example being Marcel Breuer's "F41". Although one might be forgiven asking here whether the castors are simply a decorative element, are intended to allow you to push the furniture around more easily, or are destined to help the sleeper be moved in the direction of his or her bed. Not to forget the outdoor versions for your sun deck, such as Richard Schultz's "Outdoor Chaise Longue", Lievore Altherr Molina's "Leaf" or Tord Boontje "Shadowy Sunny Longer", which actually has its own sun shade.

Powernapping was also a topic very much present at the Vitra stand at this year's Orgatec. Charles&Ray Eames' classic "Soft Pad Chaise" was specially augmented for this year's Cologne furniture fair by Antonio Citterio (as an Italian he knows all about siestas) and boasted a hood like a mini-tent and a little blanket bearing the words "15 Minutes Power Nap". The Eames originally designed the "Soft Pad Chaise" for their friend Billy Wilder -Americans have traditionally likewise appreciated the benefits of a power-boosting snooze. The Hollywood director wanted a recliner for that short nap in the office, but did not want to snooze for longer than 20 minutes. The chaise is deliberately 45 centimeters narrow, such that as the body of the person lying on his/her back relaxes in sleep so their hands will drop down after about 20 minutes, meaning the person wakes up of his or her own accord. Charles Eames also had a copy of the "Soft Pad Chaise" in his own office. The hood Antonio Citterio dreamed up is not meant for mass production and gives the chaise the feel of an installation. While on the ground floor of the trade-fair stand the Citterio version of the "Soft Pad Chaise" was tested by countless visitors, on the first floor it stood behind a pane of glass in the carefully staged "Silence Room": between rosemary plants, little bushes and trees - almost as if in a garden overlooking the Med.

Another category of chairs for sleeping proved especially charming. Here, the dimensions of the seat, backrest and arms are so large that in these chairs you can simply curl up like a cat for a nap. The chair has to be soft and inviting, of course, whereby the one or other example is reminiscent of a folding bed. In order not to rob the central seat or rather reclining surface of its appeal, the base frame tends to be very modest in such items. For example, "Sleepy Chair" by Japanese architect Daisuke Motogi brings to mind a mattress, folded up a few times, and based on small wooden feet. English designer Charlotte Kingsnorth experimented with folded felt for "Felt Up" and then places the outcome on a bent tubular steel frame. The upholstered shell of the "Dancing Chair", the brainchild of Constance Guisset from France, rests on a crinoline-shaped rocker frame. And for anyone with enough space, there is the veritable "Daybed", be it the one created by Mies van der Rohe, the other by George Nelson or, just re-issued that from de Sede.

The idea cannot be to convince the whole world they should enjoy a siesta. Even if it were entertaining to imagine what it would be like if all the countries of the earth, one time zone after another, were to doze off for an hour or two every afternoon, at least in part. Yet as we all know, the one feels great after a nap, while the other feels tired. Ideally, everyone in employment the world over would have the opportunity to power-down for 30 minutes a day, if they so wished. And until that dream becomes a reality there is only one thing: to keep dreaming of that recliner on the beach on the Med. 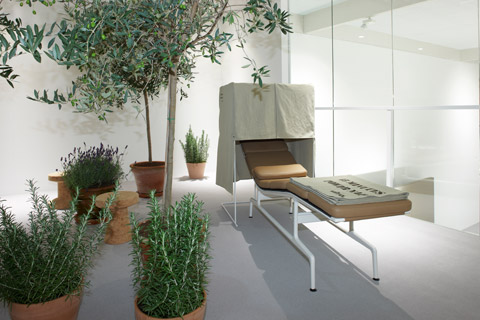 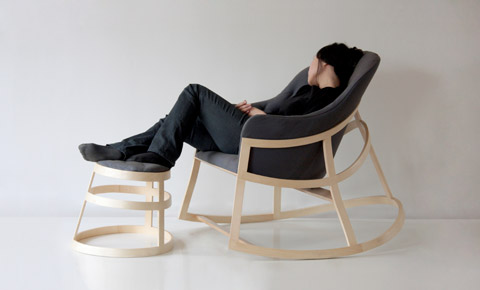 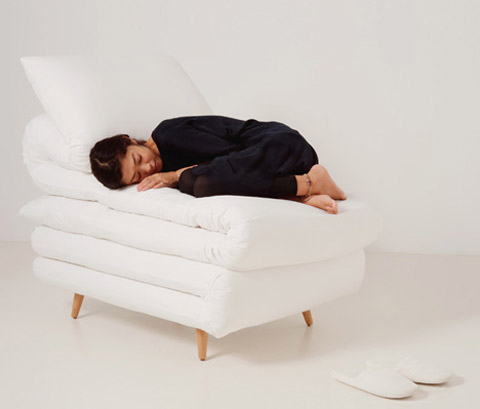 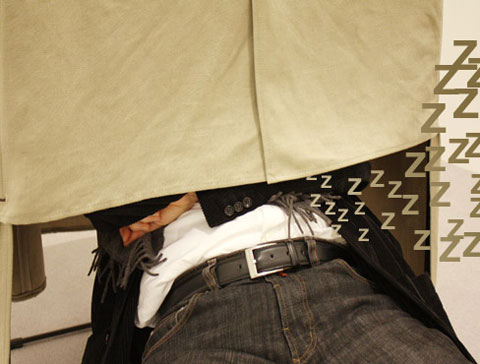 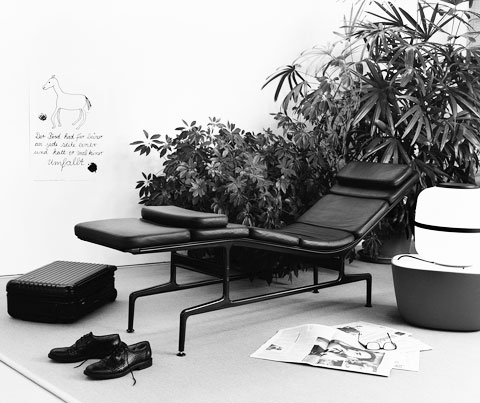 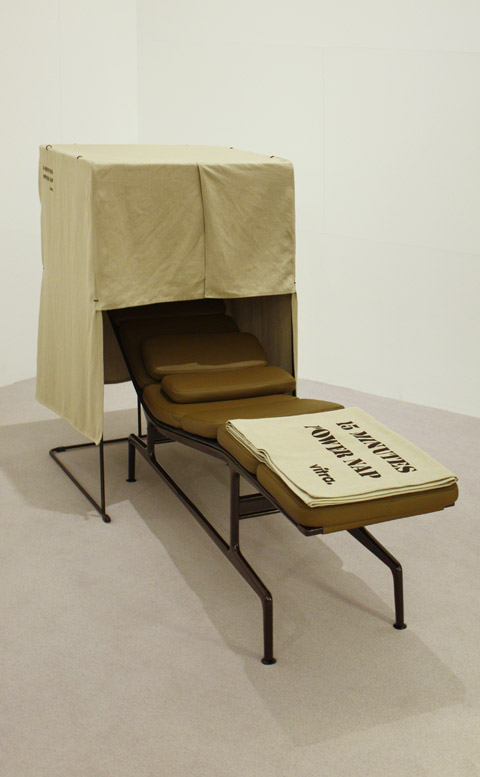 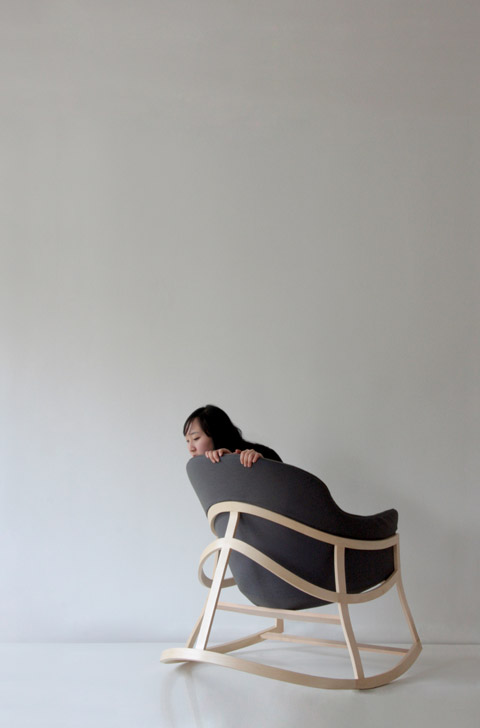 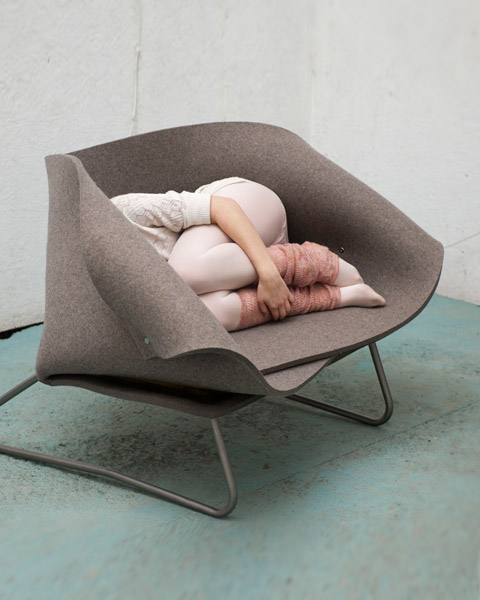 Felt Up by Charlotte Kingsnorth 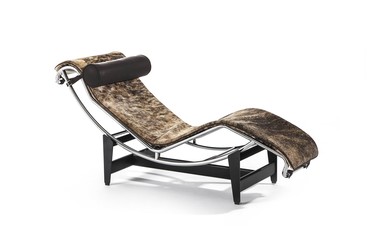 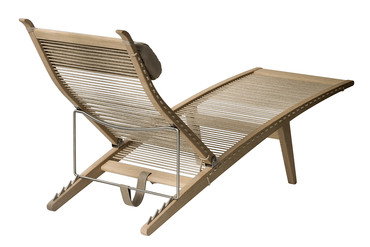 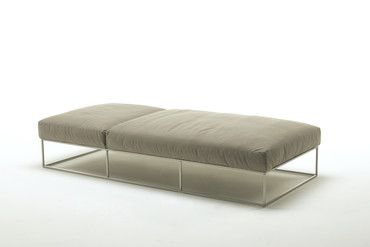 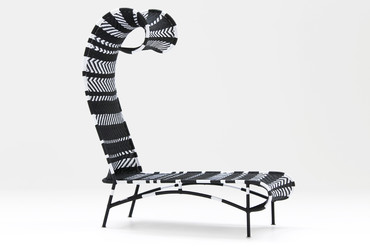