Living by the water, on the water, submerged in the water: For Mike Bouchet, what sounds like new housing concepts was initially a sunken art installation. However, the American quickly transformed his artist's bad luck, giving his work a special "signature", namely "the accidental accident". As his work had quite literally sunk last year during the 53rd Biennial in Venice, it seemed only obvious to not only dismantle the softened remains but also to put them to meaningful use again at some point. What was left over from "Watershed" is now lying in piles in the Schirn Kunsthalle in Frankfurt.

As such, his Venice project has almost been returned to its original condition. After all, for the Biennial Bouchet had asked Forest Homes, a company in Selinsgrove, Pennsylvania for a wooden building kit for a detached house, assembled the pieces according to the instructions, then gone to great lengths to make the whole thing capable of floating before launching it in Venice's harbor. Within the space of just a day, though, two-thirds of the installation sank. The dream of owning what is supposedly your own home, sold in America thousands of times by Forest Homes under the name "Sir Walter Scott" and encountered en masse in American suburbs, soon evaporated. But the idea of a new kind of living, of extending a city's housing to the water did not take a dive.

That said, at first sight Bouchet's continued project in the Schirn does not seem to have much in common with "New Living", as the exhibition in Frankfurt is called. What is presented here is much more reminiscent of images of catastrophes as they flicker across the TV screens in the wake of hurricanes or earthquakes - except that the tidying up work has already begun. Or has perhaps a construction company already delivered the first material for a house that is to be built? If so, the construction materials were packed very carelessly and untidily. The blocks of plywood and roofing felt, between which pipes and cables, rusty nails, screws and iron clips jut out, look more like a car that has gone through a scrap press.

Bouchet has re-arranged the onetime compact prefabricated house into 15 stacks of almost equal size. With the Victorian-style mass product the American, who has been living in Frankfurt for six years now, takes up one of his basis topics: consumption - and its failure. Oh, the things he has had mass produced so far - normally by hand -: 1,000 ceramic heads of Tom Cruise, for example ("Top Cruise", 2005), possibly intended to remind us that the not overly talented Hollywood star could easily be replaced in his movies by another actor with a pretty face. For "Carpe Denim" (2004) Bouchet had jeans made in Columbia, and then in the exact region where they were cut and sewn, but where hardly anyone could afford to buy them, he had them thrown out of an airplane. He later repeated the jeans downpour - on Germany's shopping street, per se, the Zeil, which is certainly not short of this item of American culture.

Born in 1970, Mike Bouchet is a master of the absurd: But his works are anything but pure fun. Did he perhaps factor in the "the accidental accident" at the Venice Biennial? It is possible. In retrospect the accident served to complete his work, unlike what happened two years earlier when the installation "Template" by Chinese artist Ai Weiwei was knocked over by a storm. At "documenta 12" in Kassel Ai had assembled an installation composed of doors and windows from destroyed Chinese houses from the Ming and Qing Dynasties that had been demolished to make room for new buildings in the booming People's Republic. Ai's intention was to conserve the old, but when his construction collapsed what was of historical value was destroyed a second time.

Bouchet, by contrast, did not want to erect a monument. For "Watershed" he plays with the commercial illusion that in buying a prefabricated house like this one you could simultaneously acquire independence and individuality. Which is ridiculous, of course, when your immediate neighbor lives in an identical "Sir Walter Scott" dwelling. Imagine calling the house after the Scottish author of all people, or more precisely: after his house "Abbotsford", which with its bay windows, pinnacles, corner towers and stepped gables presaged the Victorian Baronial style. Another absurd detail that fascinated Bouchet.

As such, the sinking of his work, which architecturally speaking remained a foreign body in Venice, was only logical. Afterwards, Bouchet spent weeks re-working the rubble like a sculptor, removed some material, added some, layered it in various arrangements until at some point he finally declared his work to be complete. Now the 15 blocks rest on 15 different carpets. As such, the former house itself becomes a piece of furniture that could be lived with. A new habitation could even emerge from the furniture, after all, it is another building kit, though for a somewhat simple dwelling. Erect it on the River Main- and you would have "Watershed II".

With his show in the Schirn Bouchet does not really answer the question of what he understands by "New Living". But he has set up a sales agency in the Kunsthalle, to market himself and his ideas. These include "Bouchet Pools", swimming pools inspired by the highly complex forms encountered in nature, so it says. And buildings are to be created with which the man from California is keen to overcome the force of attraction. Who knows: Perhaps the houses could even be built on the water. 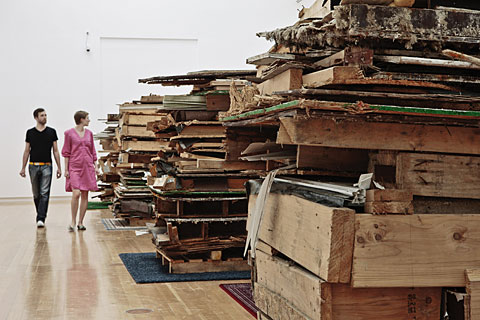 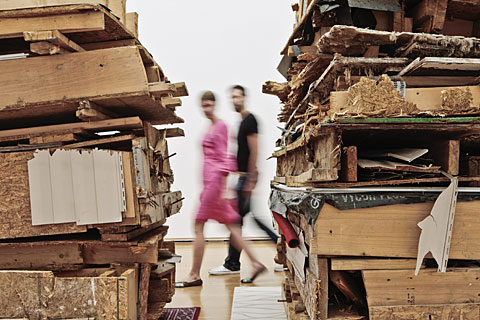 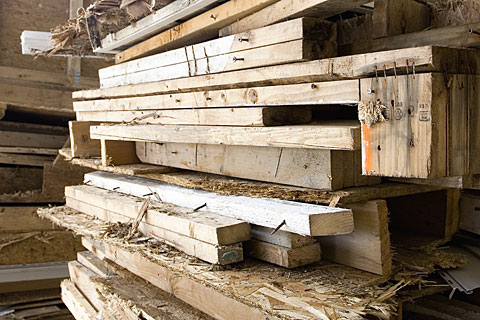 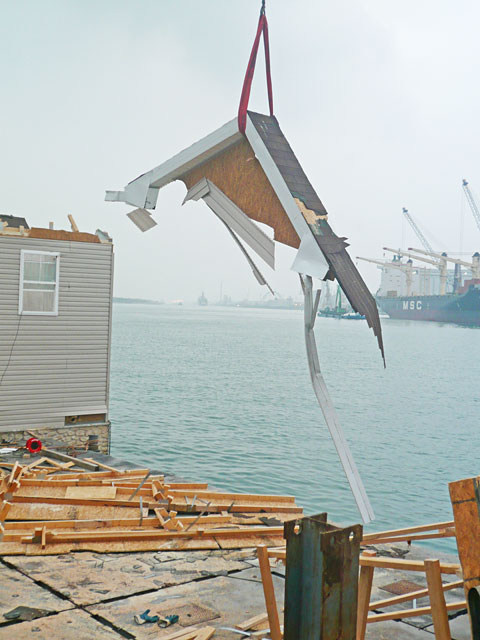 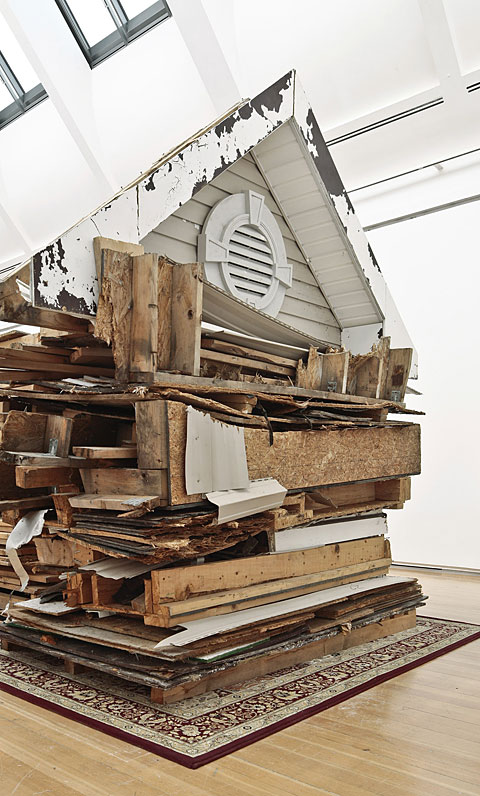 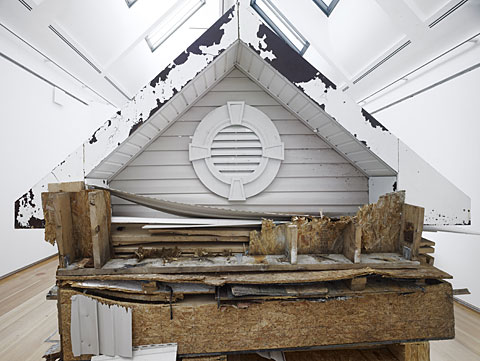 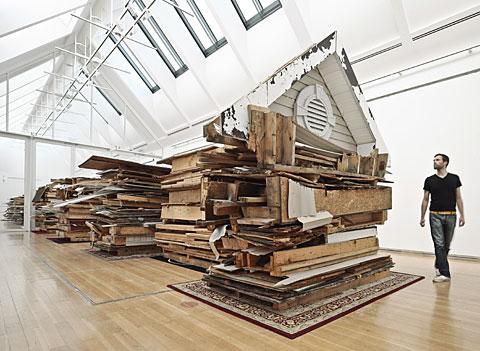 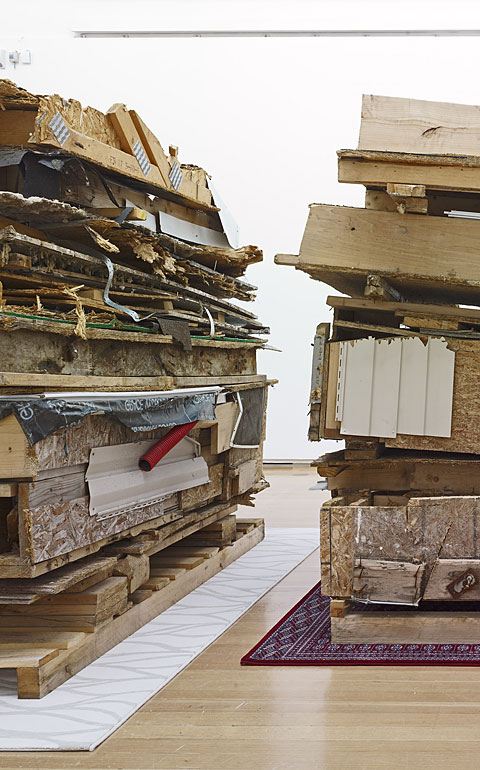 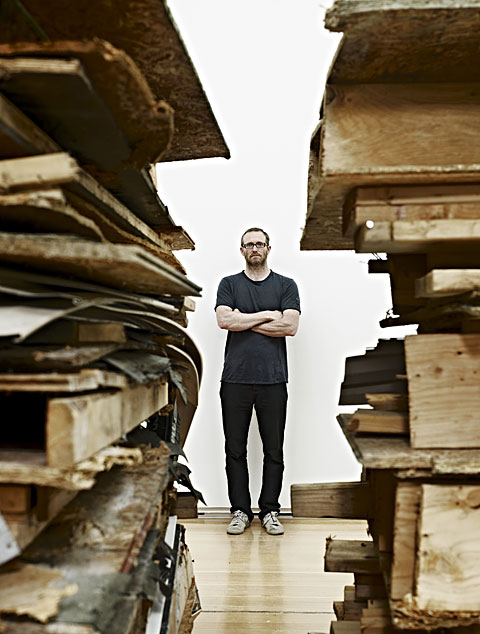 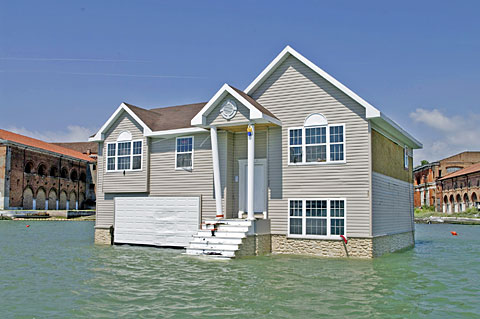