In the very recent past, or so the story Socratis Socratous tells, a large number of palms were transported to the north of the divided island of Cyprus in order to make the landscape there seem more exotic and somewhat more Oriental. And he continues by saying how at the same time the rumor did the rounds that cobra eggs lay concealed in the trees' roots. Fear grew when snakes actually started to hatch. Now a boat with a palm trunk is plying the Canal Grande and another lies in the Cypriot Pavilion. Snake charmers from India, a country whose colonial history has some things in common with that of Cyprus, ostensibly wander around town, as only they have the power to entice the cobras out of their hiding places. Snakes, Socratous says, simply do not obey borders.

That is only one of many histories that address the question of the uncontrolled way in which things change despite political ossification, how myths and features wander between the cultures. For the Other, the alien, the threatening has long since become lodged within us, the paths along which we move between and interact across local and global contexts have become as ramified as a river delta or a bundle of roots bereft of a center. But how to follow the migratory movements of the imaginary?

Could a show such as the Venice Biennial, to allude to one of Jorge Luis Borges's short stories, perhaps be just that, namely a garden of forking paths. If that were the case, it would not longer create a single chain of works, each a coherent identity, but would trace the individual arteries, rivulets, or detours that we invariably encounter if we follow the multifarious links that run from each artwork into the past, present and future. The Biennial is such a network, more by chance than by design, and wandering around it resembles an odyssey with no certain outcome. We thus continue to be productively disoriented and creep around the edges, leaving what is ostensibly the best path and following the unforeseeable movements of that shy wild animal which still goes by the name of art.

"Fare Mondi - Making Worlds - Welten machen" was the name Daniel Birnbaum, Director of the 53rd Biennial, chose for his exhibition at the Arsenale and in the Biennial Pavilion. What Birnbaum attempts is borne by that mixture so typical of him: sharp curiosity, philosophical reflection and a well-structured exhibition. He wanted, he announced during the preparations, "to explore skeins of inspiration that cover different generations" and highlight both "the roots and the forks" that "extend into a future that has not yet been defined".

As a consequence, we can view "Fare Mondi" as a whole from various different perspectives: As a statement on the fatal pressure the art market exerts fostering homogeneity and uniformity, as a straightforward sequence of individual works, as a philosophical concept that, in the wake of Nelson Goodman investigates artistic "ways of worldmaking", as a venue of production and experiment, in other words as a display of a changed praxis, and finally as a place where processes of transformation and transmission, i.e., of art's transmission of energy and the translation of meaning can be observed.

As regards the selection, Birnbaum has opted for many artists in the show with whom he has collaborated at Frankfurt's Städel Art Academy or as a curator has already presented elsewhere in different settings, not least in Frankfurt's Portikus. The selection extends from John Baldessari, Tomas Saraceno, Thomas Bayrle, Tamara Grcic, Rirkrit Tiravanija, Wolfgang Tillmans and Tobias Rehberger through to Simon Starling. And he has enriched the range by incorporating both historical positions (often so-called ‘artist's artists') such as Lygia Pape, Öyvind Fahlström, André Cadere or Joan Jonas, and positions lesser known to the broader general public, some of whom are real discoveries, such as Ulla von Brandenburg, Mike Bouchet, Natalie Djurberg and Jan Håfström.

What actually continues to impact down through the generations and which misunderstandings prove to be productive in the process is hard to say with any accuracy. Thus, Michelangelo Pistoletto, one of the Old Masters of arte povera, once again destroys the world of semblances of a gold-framed mirror (by way of representative of his own identity), and in the reconstructed Lygia Pape installation "Ttéia" light crosses the room as a perfectly arranged bundle of golden threads. Otherwise, as so often much is a complete metaphor: In the case of Carsten Höller, no paths are straight and on top of which they lead downwards; Amy Simon seeks the whole in the fragments, Moshekwa Langa creates a network from colored threads and all sorts of things. Indeed, there are many net-works that illustrate the overarching whole, but little art that enables a singular aesthetic experience.

Finding spaces for action in which market hierarchies do not predominate, forging intellectual links in order to expand our vision, indeed representing art as a praxis for addressing difference and alterity - some of this Birnbaum has achieved. That said, the huge machinery of a biennial inevitably make it difficult to indeed create a kind of ‘spiritual geography' by means of a constellation of artworks. Overall, this has meant that Birnbaum's show is spacious, but seems surprisingly conventional as a sequence of individual works. Moreover, the metaphor of "making worlds", however much it references the numerous symbolic worlds that co-exist, remains strangely vague. The result is that you wander from one ‘world' to another without really taking note of their invisible poignancy. All too often, the world-making as a charting of the world by means of art on show ossifies into something rigid that the viewer then needs to change back into fluid form. "As art of the imaginary," Éduard Glissant writes in "Culture and Identity", "translation is a truly creolizing operation, a new and indispensable procedure for the enriching mixture of cultures." Because world-making (be it in production or in reception) is associated with the not exactly simple work of translation, the unforeseeable often fails to materialize during translation owing to a lack of experience. What remains is a mere admixture of works and cultures.

In the Dutch Pavilion, Fiona Tan likewise mixes cultures and periods that are remote in time. "Disorient" is what she has tellingly named her latest video installation, created specially for the Venice Biennial and combining current photographs from Asia (opium fields, dusty mountain trails in Kashmir and the like) with the travelogues of famous Venetian trader Marco Polo and slow camera pans through the marvels of an old colonial grocer's shop full of carpets, textiles, weapons and stuffed animals.

There are good grounds, however, for doubting whether Marco Polo's account of his adventures and the "wonders of the world" does in fact still influence our image of the Orient and is thus suited to be held up as a foil for today's "babble" or "disorientation" (which is not least caused by the media). We can all too easily see through the skewed relationship between fact and fiction in Fiona Tan's epic, and the disorientation then all too simply dissipates in the bombastic images. Here, art seeks to be metaphorically and politically correct, which leads to it losing its grip on reality. The "Guests" environment that Krysztof Wodiczko has erected in the Polish Pavilion is a more appropriate way of approaching the difficulties of translating one system into another. The guests, the outsiders, who arrive uninvited in the paradise of capitalism, are there - and yet remain outside. They sweep leaves off the upper windows and clean the windows through which we see nothing else and nothing other than their shadowy figures. They are there, that is for sure, even if we inhabitants of the feel-good space keep that at a distance.

Great is the enthusiasm and faith in the political power of art specifically in the pavilions of the numerous small nations, which are scattered around Venice. Be it Koka Ramishvili in the Georgian Pavilion, who depicts the upheaval in his country by means of processed TV images - as a tortuously slow incredibly torpid wrestling of bodies in a crowd that takes place in slow motion. Or Kristina Norman in the Estonian Pavilion, who analyzes the difficulties of at least laying the post-War era to rest taking the example of the struggle surrounding the relocation of a memorial known as the "Monument to the Liberators of Tallinn" - as a mixture of documentation, action and sculpture. Constantly, real conditions interpenetrate and are related to the potential art has for describing plurality and heterogeneity beyond all preordained homogeneity. Jamshed Kholikov's photographs of sculptural bus shelters in Tachikistan, Uzbekistan and Kirgistan (e.g., a bus stop made of hammers and sickles), certainly seem more filled with life than the one or other large-format artistic installation that seeks solace in the irreproachability of an abstract metaphor of networking and transformation.

What world should we rescue?

Making art always also means making a world, and to this extent Daniel Birnbaum put his finger on things when choosing the title for his show. However, the point is not just to create some world or other in symbolic space, but how that world then interacts with the complexity of everyday experiences, hopes, fears, compulsions and misinterpretations, with political and ideological perspectives. It is a different matter altogether that as regards the mode of presentation Birnbaum essentially risks too little at the end of the day.

Thus, the question remains as to what it is that will function as a means of rescue or redemption. In such a context, a "Fire & Rescue Museum", such as Jussi Kivi has erected in the Finnish Pavilion, is definitely very welcome. Not only children's eye will gaze in wonder at this anything-but-harmless array of toy cars, hero worship and instructions on how to behave in the event of a nuclear disaster, whereby they all look as innocent and harmless as if they were taken from a picture book. Precisely for this reason, we tend to be slowly but insistently troubled by them, sensing that what was designed to rescue things remains inextricably bound up with what it is supposed to rescue us from. Rescue also has its perversions. Thus, we suddenly find ourselves coming full circle, caught in a loop that certainly does not bode well. Tellingly, Martin Boyce has entitled his piece "a kind of entropic loop" - in the Scottish Pavilion he has transformed an apartment in a palazzo into the second nature of a furnished garden. Who knows, but perhaps there is so much talk of difference, diversity and heterogeneity precisely because there is increasing entropy in art itself? In the final analysis, the routine with which all too much gets addressed and processed in Venice functions as entropy and elides difference.

Put differently, it is not really such a great crop this Biennial year. There are no really surprising or indeed mind-irritating works; and yet there are plenty of crazy player-artists to be encountered. Thus, in the first floor of a palazzo directly overlooking Canal Grande, Ming Wong has breathed new life into Singapore's lost film industry, while one floor below Ragnar Kjartansson has transformed the Icelandic Pavilion into a bohemian-like mixture of studio, party and music performance. He paints, drinks, sleeps, makes music, chats, paints, drinks ... His contribution goes by the simple name of "The End". At the entrance to the Iranian Pavilion, an apartment occupying an entire floor of Palazzo Malipiero we can read the quite official statement that there is "Hope for the Future". 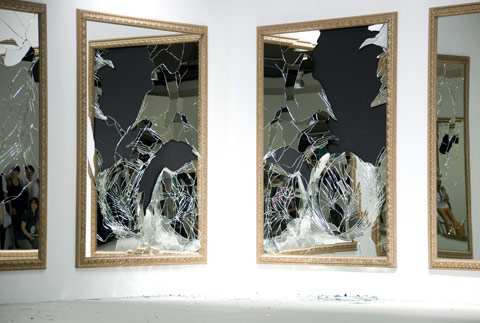 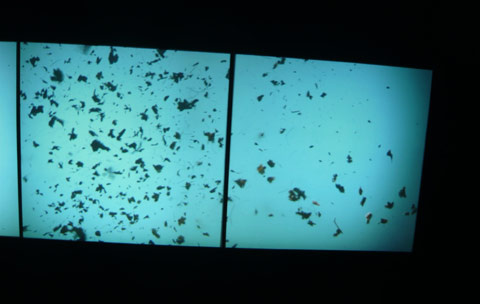 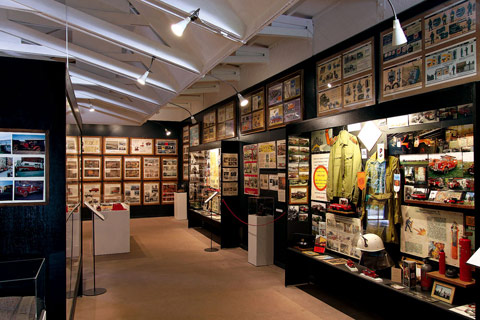 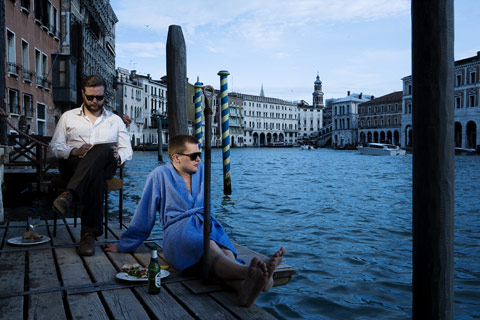 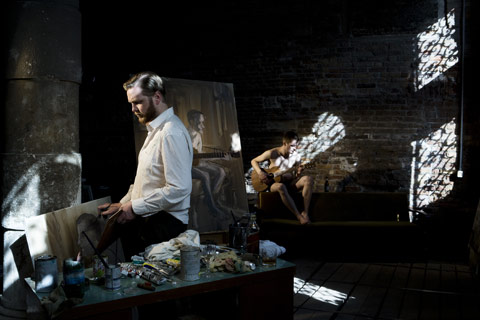 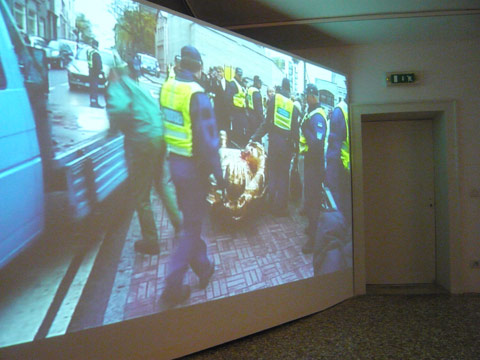 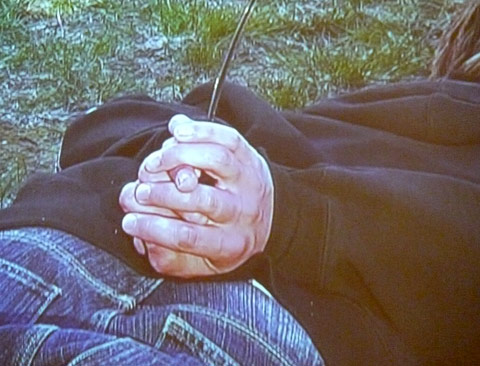 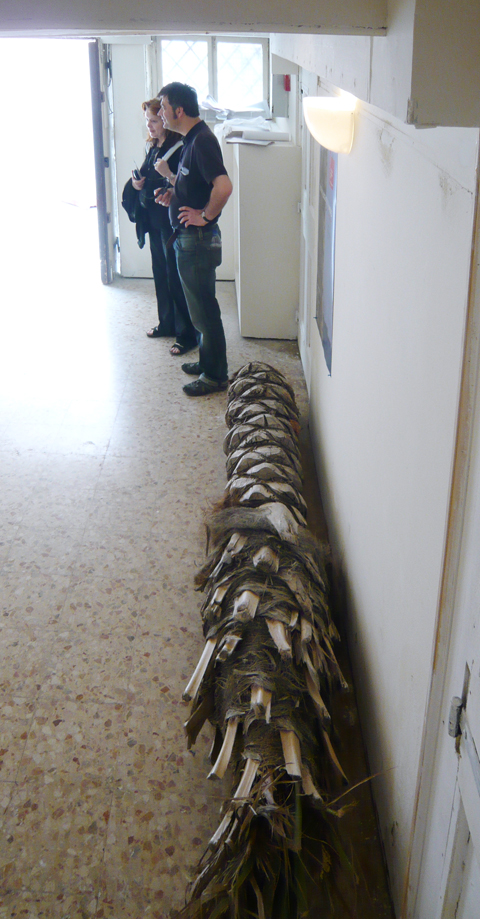 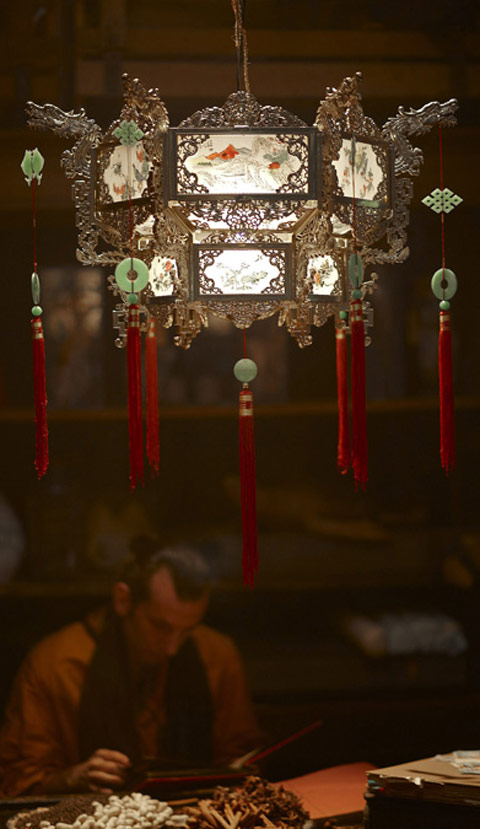 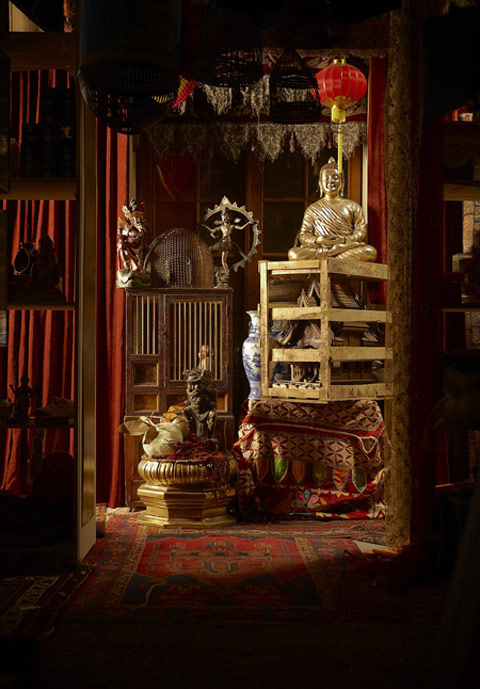 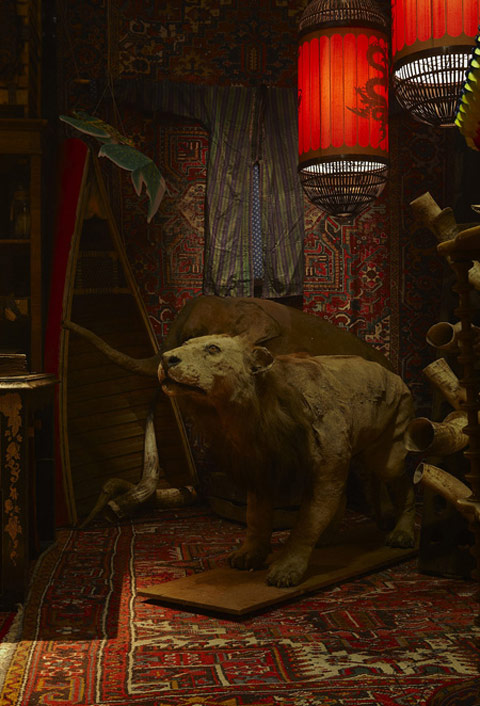 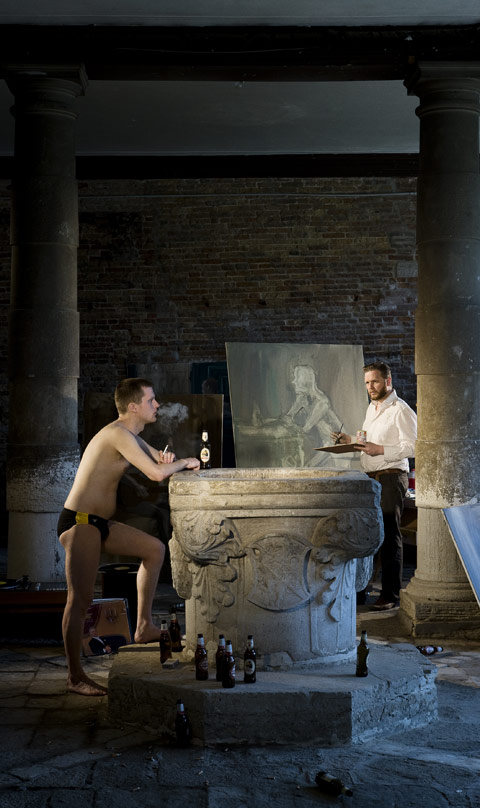 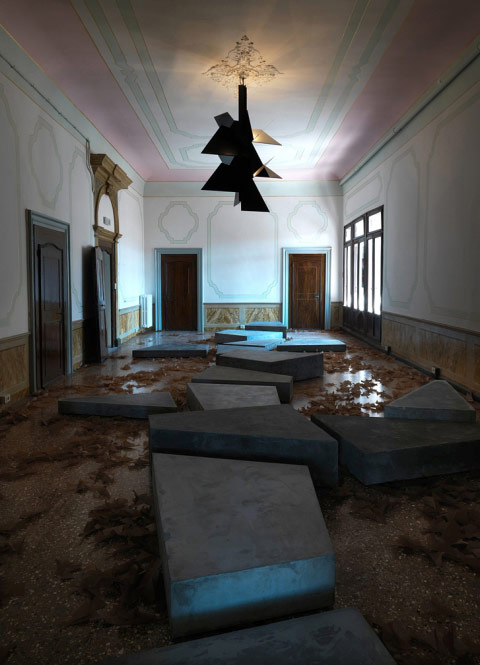 A kind of entropic loop by Martin Boyce in scottic pavilion 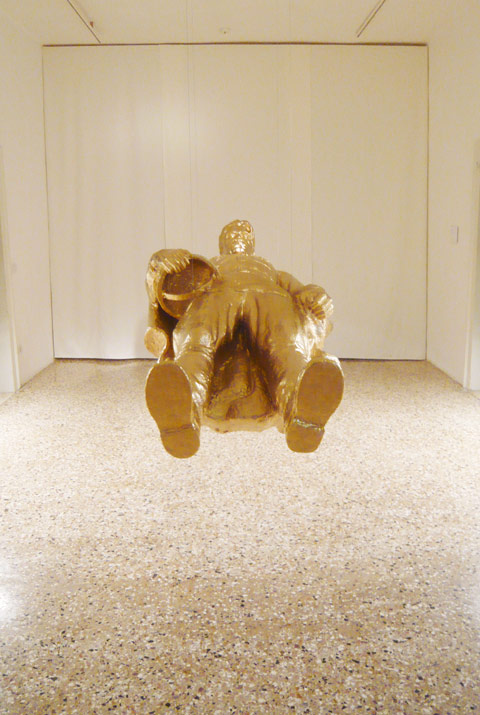 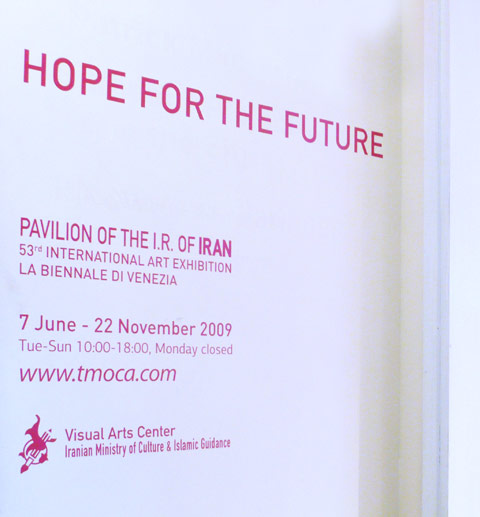